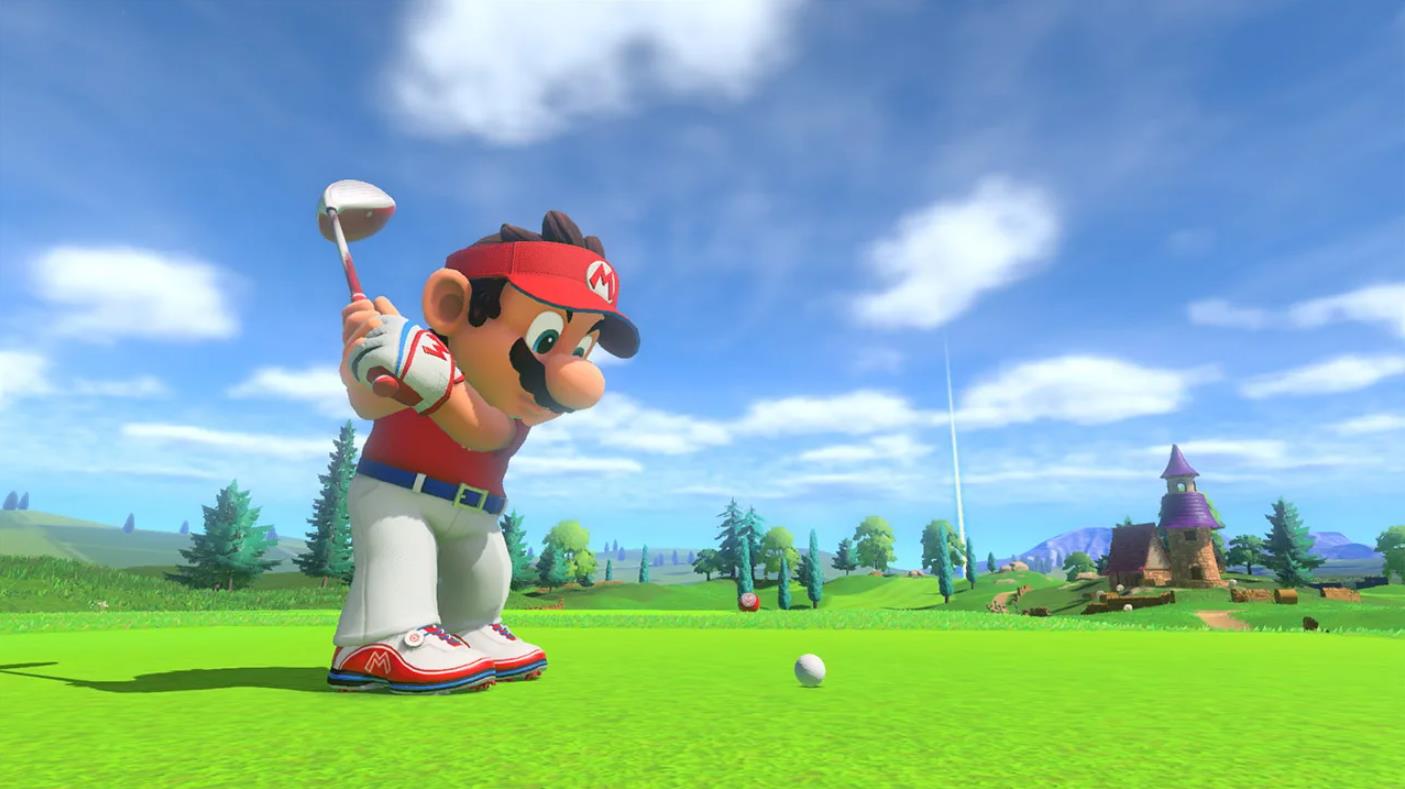 Written by Elliot Hilderbrand on 7/6/2021 for SWI
More On: Mario Golf: Super Rush

Tale as old as time. Back in the day Nintendo came out with a Mario sports title. It’s well received, an instant classic for Nintendo. Then for years: nothing. Not a peep about a follow up. And then, out of nowhere a new game in the sports lineup is shown off, and it’s coming out in a few short months. At least, that’s how I feel most of the time when it comes to a Mario golf, tennis, soccer, or baseball game.

Mario Golf: Super Rush came out of almost nowhere, certainly not expected, but I’ve been looking forward to it for three months. Does it disappoint? Yes and no at the same time. I have an absolute blast playing the game, especially with friends, but there are too many glaring issues for me to be madly in love. It’s like teeing off: you put the ball on the tee, you select the right club, give yourself a practice swing, and when it's time for your actual shot you slice it right into the bunker. 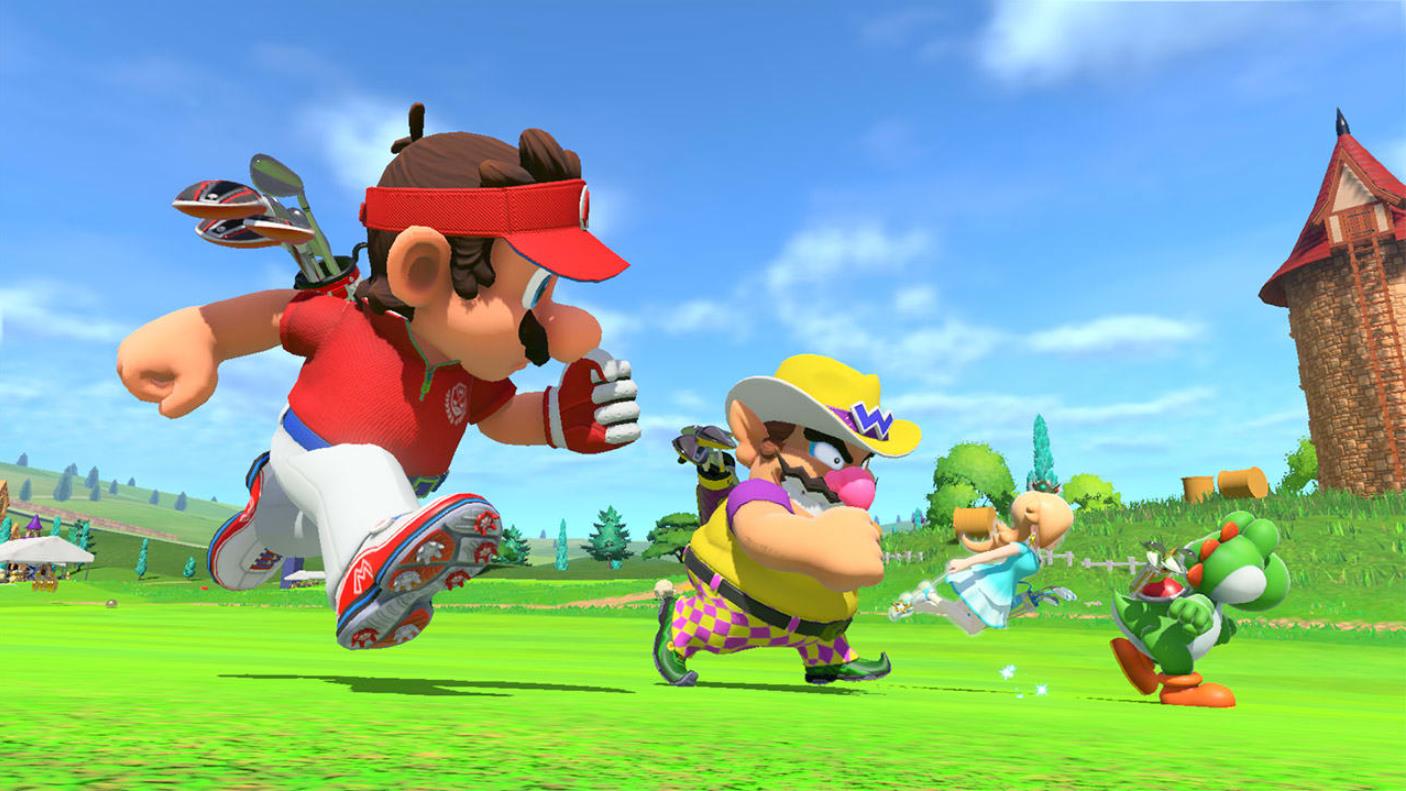 Mario Golf: Super Rush has a couple of different modes. You can play solo, do the adventure mode, or good old fashioned golf (but it’s not really old fashioned). The solo mode is basically just trying to beat your best time playing by yourself. The challenge is fun enough for a while, but quickly gets boring when there’s no one else around. Kinda like real golf, walking nine holes by yourself really starts to get boring around the third or fourth hole.

The adventure mode is pretty solid. There you play as your Mii, or one of your choosing, as you set off to become the Rory McIlroy (sorry, Tiger Woods) of the Mario Golf world. You travel through several golf zones, each with a very different and unique course, as well as a different style of golf gameplay. The story is far from gripping, but the worlds are filled with characters to interact with. After the first zone I only interacted with the people I was required to in order to advance the story. You may think that would be hard to ignore NPCs that aren’t a part of the story, but you constantly have a giant red arrow that points where you need to head to at all times, making exploring unnecessary. Each world has you try a different style of golfing, from the traditional, to speed, and cross country golf. Because each zone introduces you to a new mode of golf I felt like I was playing one giant tutorial, never really in the game, always learning about this new way to play. 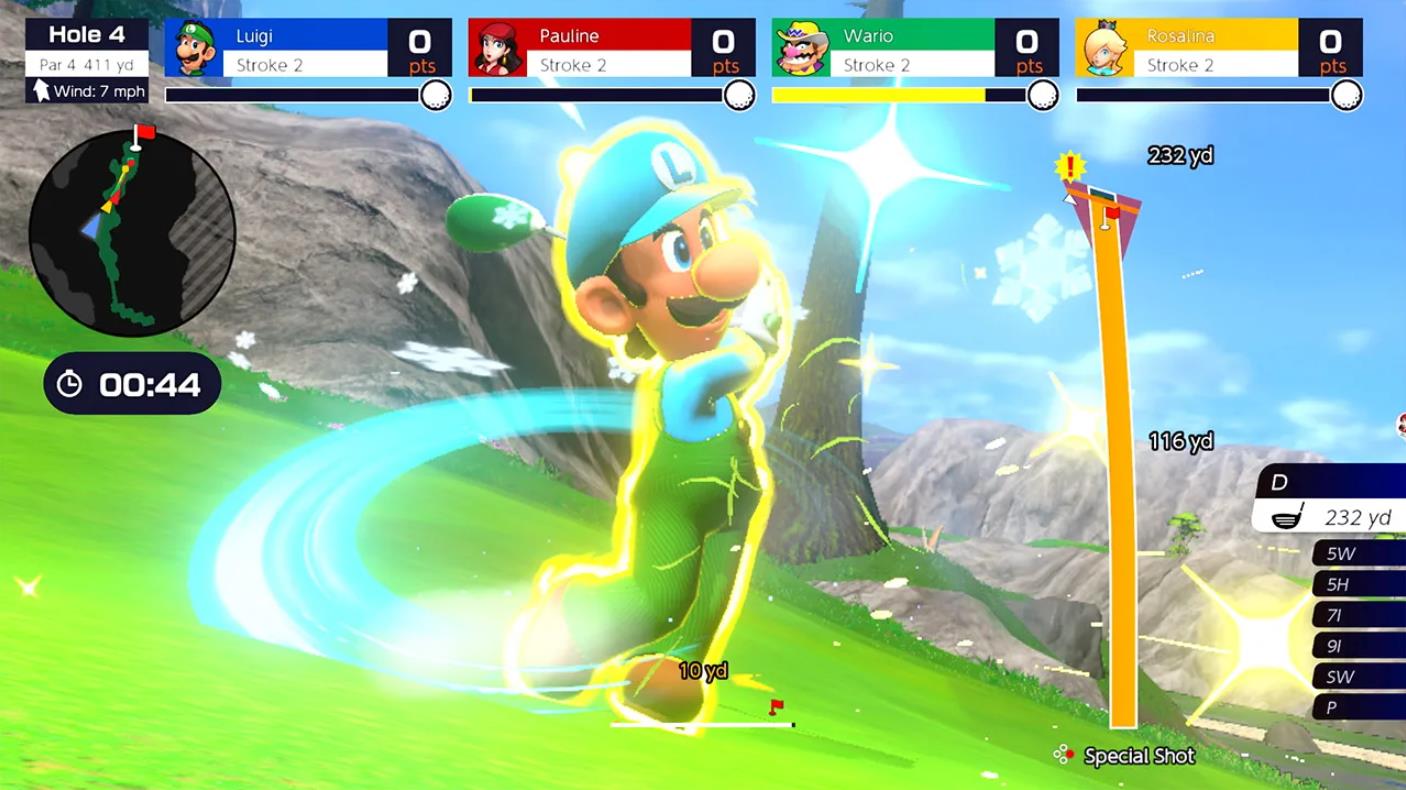 Like I just said, in Super Rush you’re not just playing the traditional golf game, but a speed version, or cross country modes. If it’s not broke don’t fix it, making traditional mode my bread and butter. The speed version is probably the one most people have seen in most advertisements for Super Rush. Everyone tees off at the same time and it’s a race to see who finished the hole first. Each stroke adds time to the hole, so you need to be fast but accurate. What a great concept that isn’t fully realized. There is just something missing about speed golf. I understand where Nintendo was trying to go. Keep the game fast paced and moving constantly. The worst part about golf is watching people play golf, I get it. There’s not enough interaction with other players, and the mechanics are a little dull and monotonous.

Cross country golf is completely different. You play golf, but after the first hole you play the round in any order you want to. Super Rush does make you get creative as there really isn’t a right or wrong way to tackle the course. I found the mode to be an exercise in frustration at times. Invisible walls would let me make a shot, but not allow me to run up a mountainside to make my next shot. When playing with friends this mode is called battle golf, and can be a pretty good time. Luckily the same frustrations I experienced in the adventure story are shared and it feels like an even playing ground. 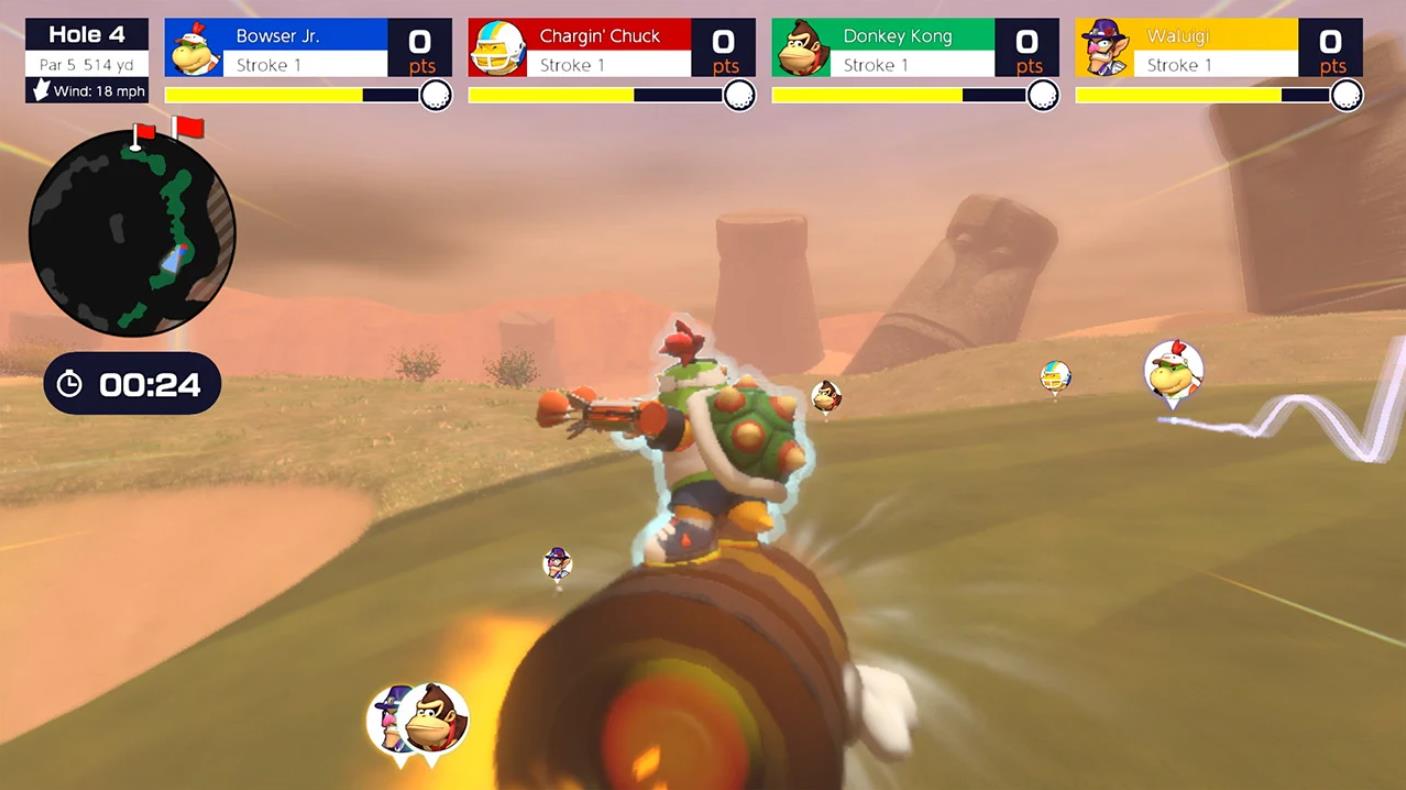 And then the tried and true traditional golf. You can have up to four players play anywhere between three and 18 holes of golf. A nice feature in Super Rush is the ability to play only using one controller, where you can pass it around to the other players when their turn comes up. I found this mode to be the relaxing golf game I was looking for. I had friends over and we took turns with the controller as we just sat and talked with each other as we played a few rounds of golf.

I wanted more. More modes and more courses. Mario Golf: Super Rush gives you six courses, five solid unique places to play, and a rookie course which only warrants a single round. I hope that more courses become available through DLC, but I won’t be holding my breath as I feel Nintendo is really hit or miss with DLC. I want to see modes like best ball, skins, or alternate shot. Most golf games have some form of these and it would expand on my playtime for Super Rush to include them. 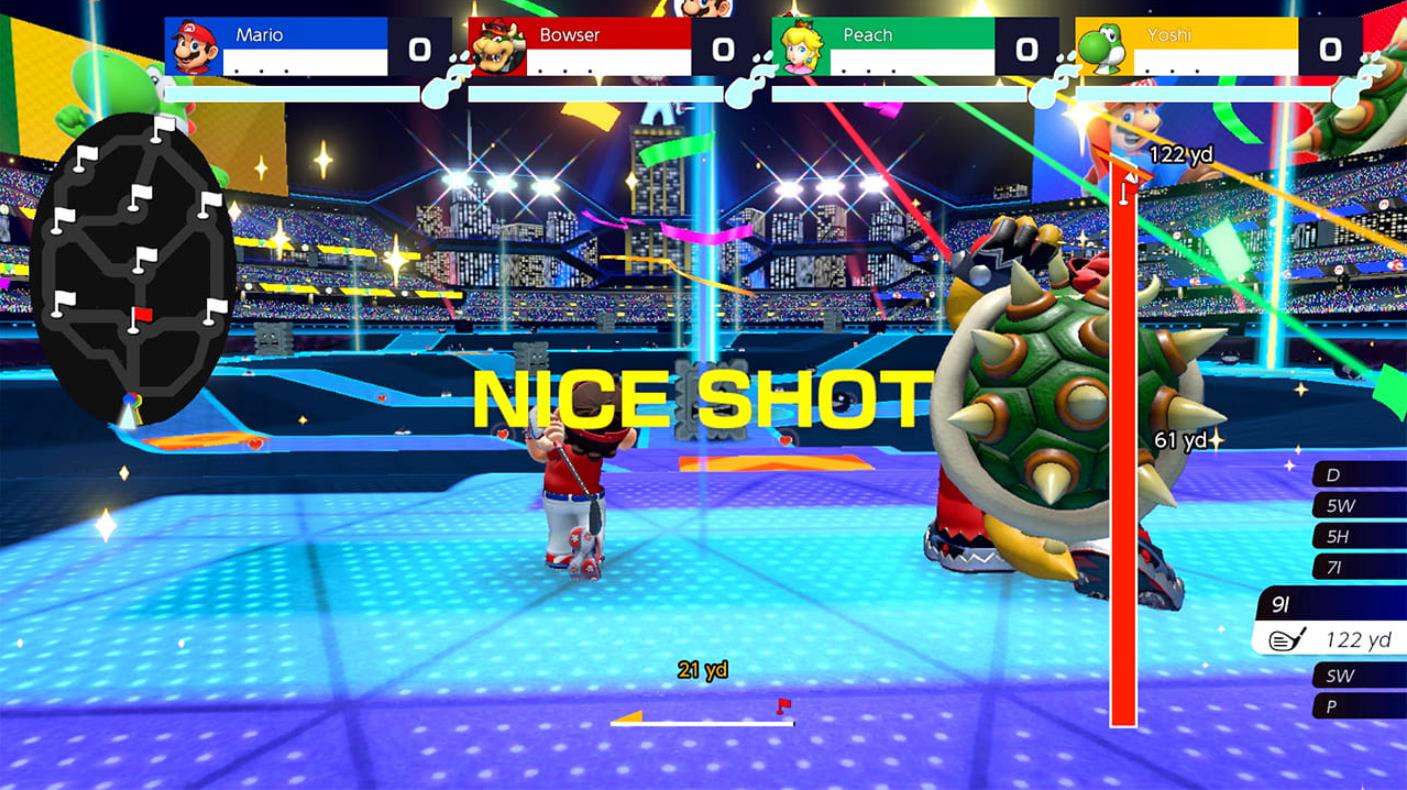 When not playing the story mode you have access to 16 other characters from the Mario games to play as. Each one has slightly different stats, which is nice for a change. You can play who you want to, more or less, and as there isn’t really a best character to play. You can have the one who swings the furthest, or one who has better ball control, or even the fastest sprinter. But no one character stands out as a must play. It would be cool to see Link or Animal Crossing characters make an appearance like in the recent Kart entries.

I had a few more things that I found to be quality of life items that just take away from what could be a great game. I’m just going to rattle them all off here. The AI in the game can be terrible and make Super Rush unchallenging, even if you're not a scratch golfer. Clubs are not super reliable when giving you distances. When you reach the green instead of seeing your character putt you see a slightly opaque version of their outline which can make it too hard to tell who's putting when playing with other people. Getting out of any mode and back to the main title screen is an unnecessary chore that takes a minute when it should take five seconds. Some characters have very unique abilities that are almost game breaking while others do so little that it makes it unfair when playing a round using the super shots. 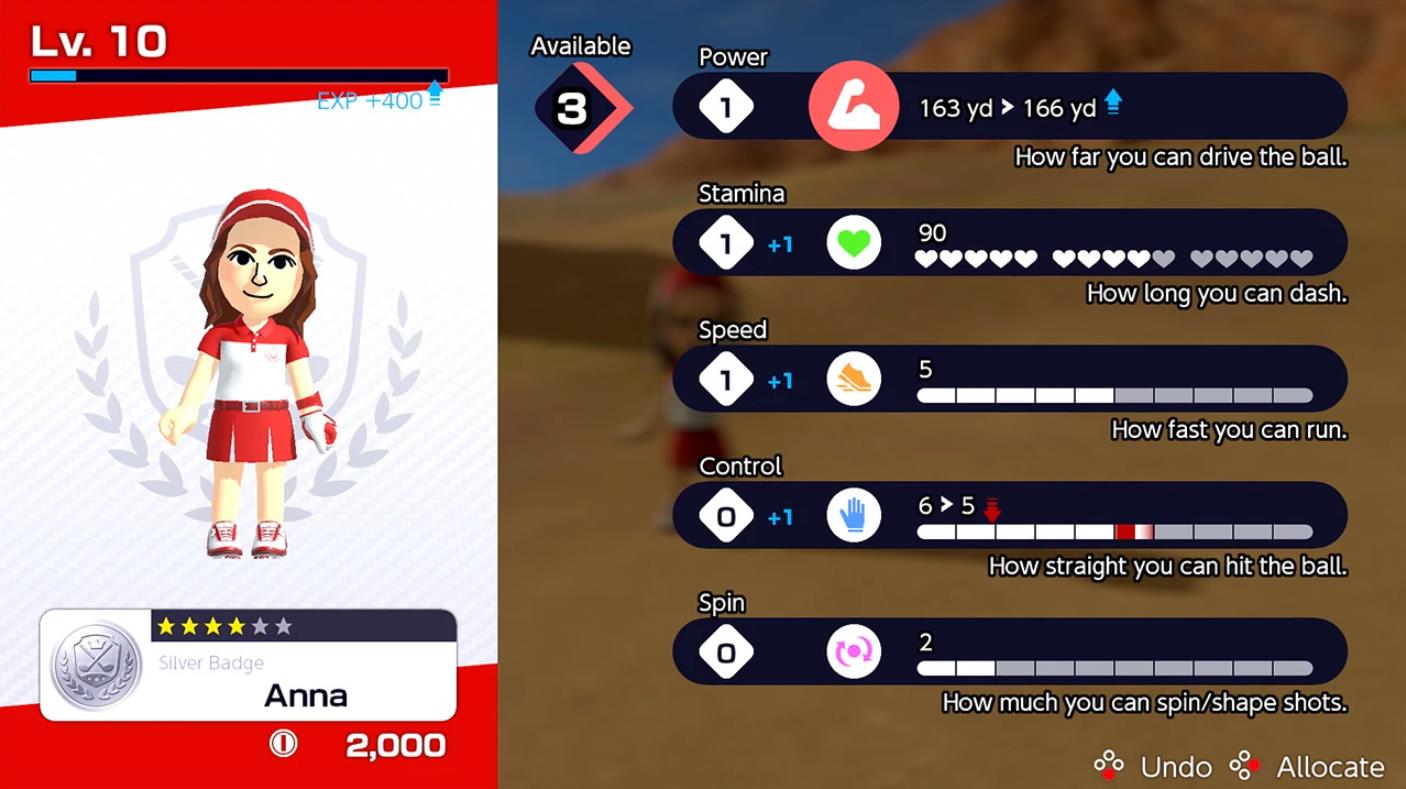 Mario Golf: Super Rush shines when playing with friends. The feeling I get having people over to shoot a few rounds with is exactly what I wanted. I was upset that I can only play speed golf with one other person on a single Switch, but as speed golf wasn’t that great to me I wasn’t too worked up about it.

While Mario Golf: Super Rush does offer the relaxing golf game I was looking for, there are just too many small issues to make this the perfect Mario sports game that Mario Kart 8 Deluxe is. Six courses doesn’t feel enough to get me to pay for the green fees to continue to play by myself. I really wonder if given another six months of work if Super Rush would be the barn burner of the game it’s close to being.

Good, not great. Fun yet frustrating. Scratching the itch while giving me athlete's foot. The new modes feel rushed and not completely thought out to be much more than a stunt. The game feels balanced when choosing which character to play, and the adventure mode will easily fill in the void of playing by yourself, just don't go looking for a gripping story. Mario Golf: Super Rush tees it off, but has the ball landing in the rough.