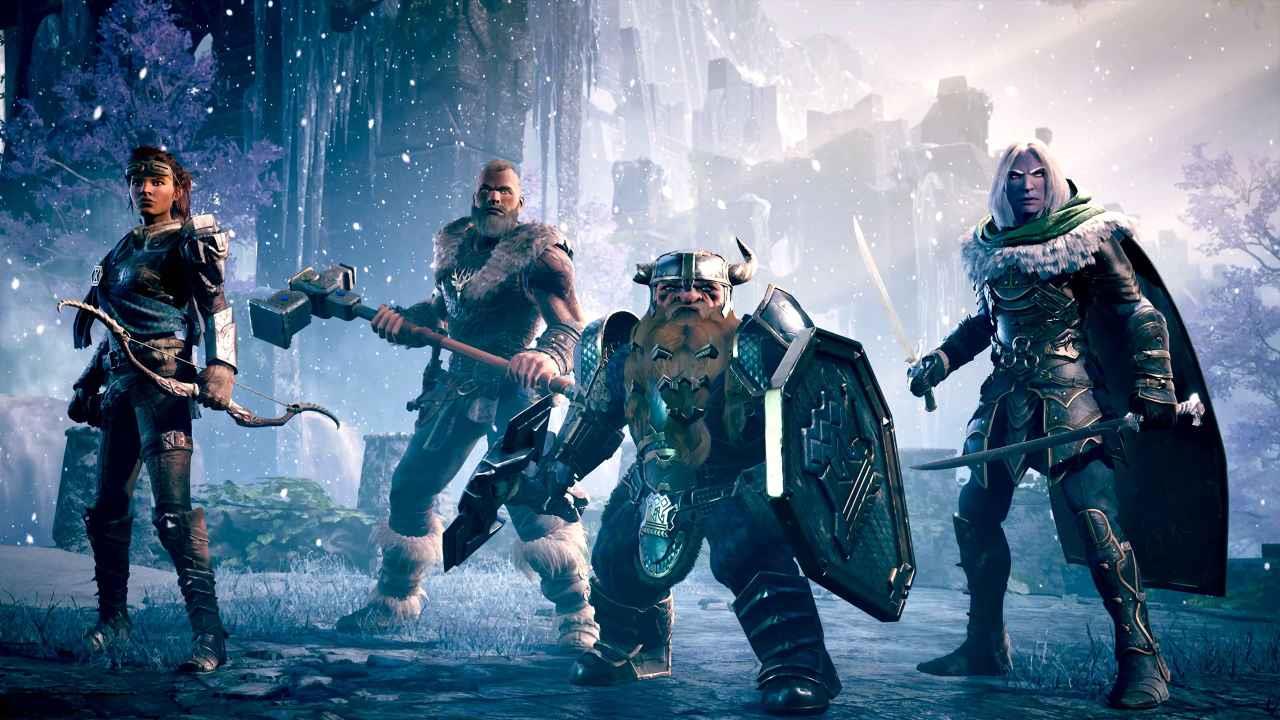 Down deep in the core of Dark Alliance lies the quietly beating heart of a fun game. There are systems in Dark Alliance that work well, and monsters that are fun to fight. But for every clever and engaging boss battle, there is one that is broken. For every room of enemies that pulls the player into a fun skirmish, there is a room of gnolls and goblins that stand stock-still while you destroy them with arrows. For every cleverly hidden treasure, there is a misfiring trap, or an attack that doesn’t fire correctly, or geometry that doesn’t visually match what is really in the game.

I had fun with Dark Alliance, but there is no denying that it is kind of a mess. Sure, it’s a mess that I have a good deal of fondness for, but just because I enjoy running around in a semi-broken game doesn't mean that everyone will. 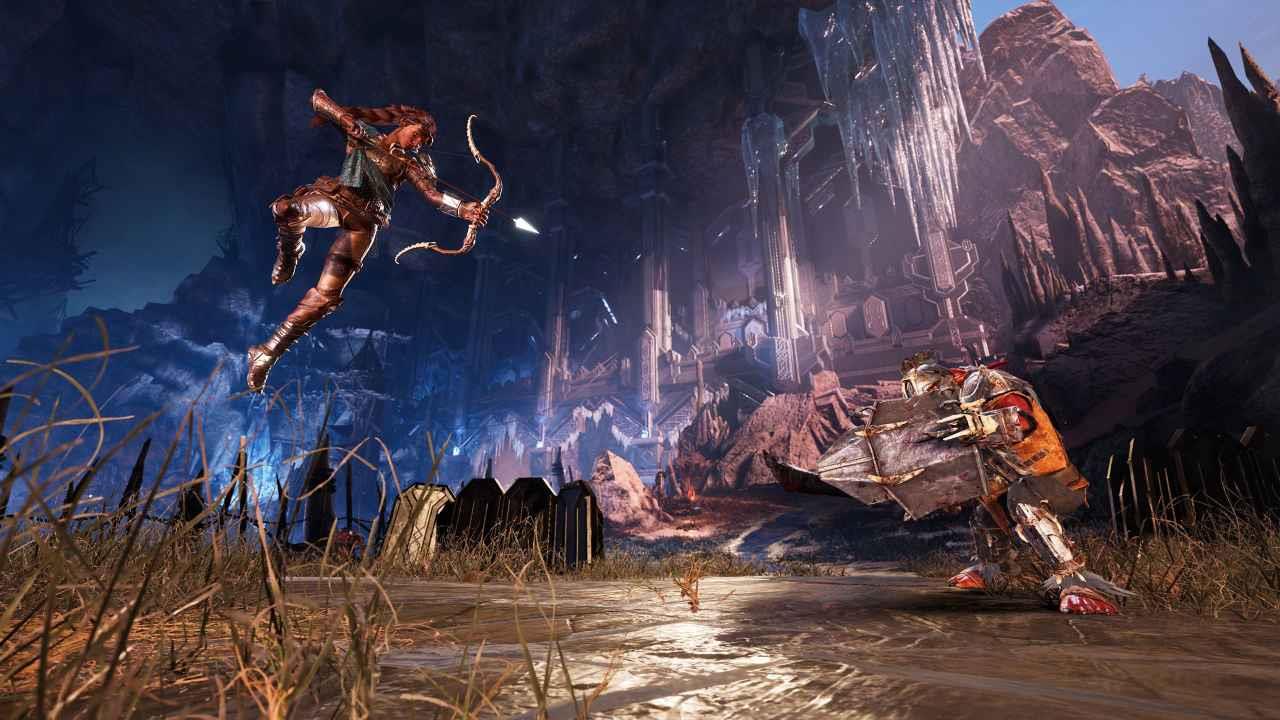 Take for example the second-to-last boss battle, against Hagedorn the Beholder. As I entered this level, I was relieved to see that there were only two small skirmishes to fight through before reaching Hagedorn. Arriving at his lair, I was treated to one of Dark Alliance’s super fun (though vaguely disconnected) cut scenes, showing Hagedorn doing…beholder stuff. The cut scene ended, and there he was. Hagedorn, in the flesh. Floating there. Just hanging out. Chillin.

I was playing with Catti-brie the archer, so I shot some arrows at Hagedorn for a while, chipping him down to about two-thirds health. Then my arrows stopped having any effect; instead of damage numbers, Hagedorn was now spawning “immune” notifications when I shot him. I jumped across the breach dividing us. I whacked at him a few times with some melee kicks. I used my special “arrows from the sky” move on him. Finally, at a loss, I took some selfies. 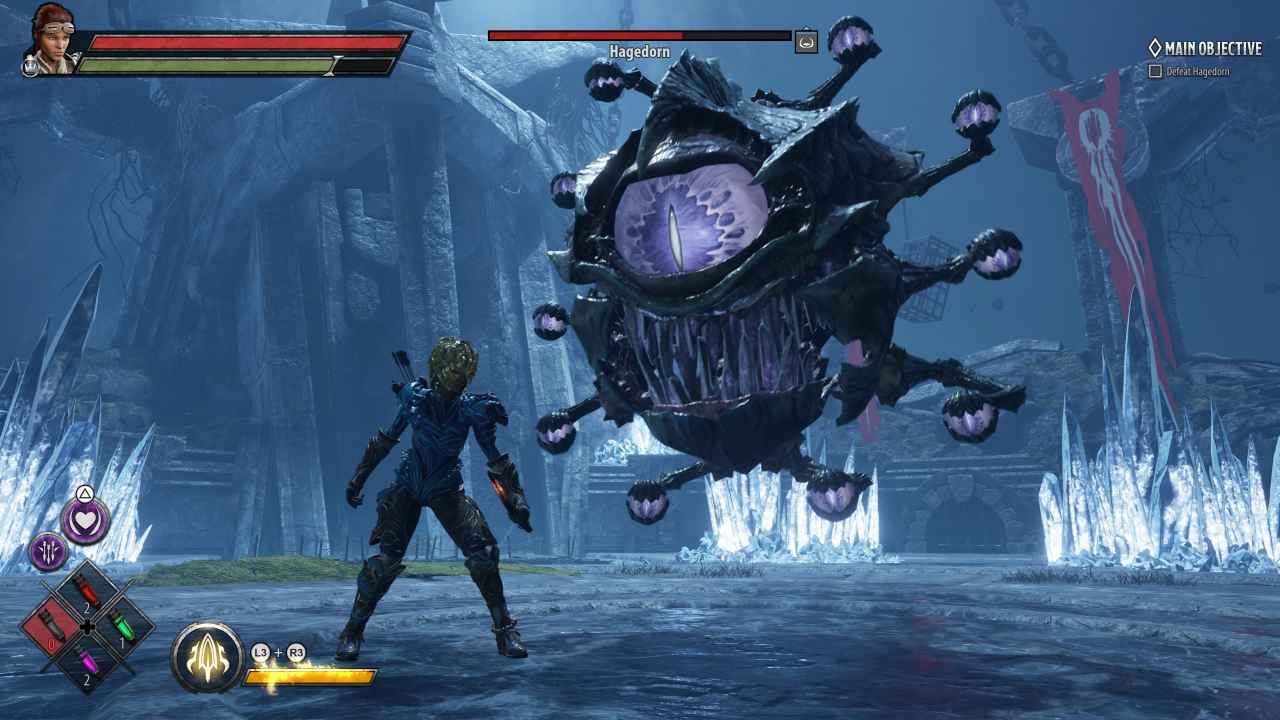 I dropped out of the level and reloaded, expecting to see statue-Hagedorn again. But this time, he was awake and raring to go. He killed me so quickly it was embarrassing. So the game reloaded the fight for me. This time he was frozen in place again. I took more selfies, this time being a little more cautious because he had just bitten me to death. The next time, he was moving around and I was able to battle him—a proper and fun boss fight—and win.

This seesaw battle with Hagedorn the Beholder (hereafter known as Hagedorn the Indecisive) is the perfect encapsulation of my experiences with Dark Alliance. When it works, it’s a fairly fun, basic hack-n-slash adventure. But when it is broken, it is wildly broken. I can’t tell you how many frost giants I have slain by shooting them 20 times while they just stood there. And what I do to goblins can only be called premeditated murder, as they seem to have no idea that I’m even present, though I’m slinging arrow after arrow into their chatty little bodies. But still, it makes me laugh when I’m standing on a ledge, clearly in sight, slaughtering them by the dozens while they chatter among themselves. 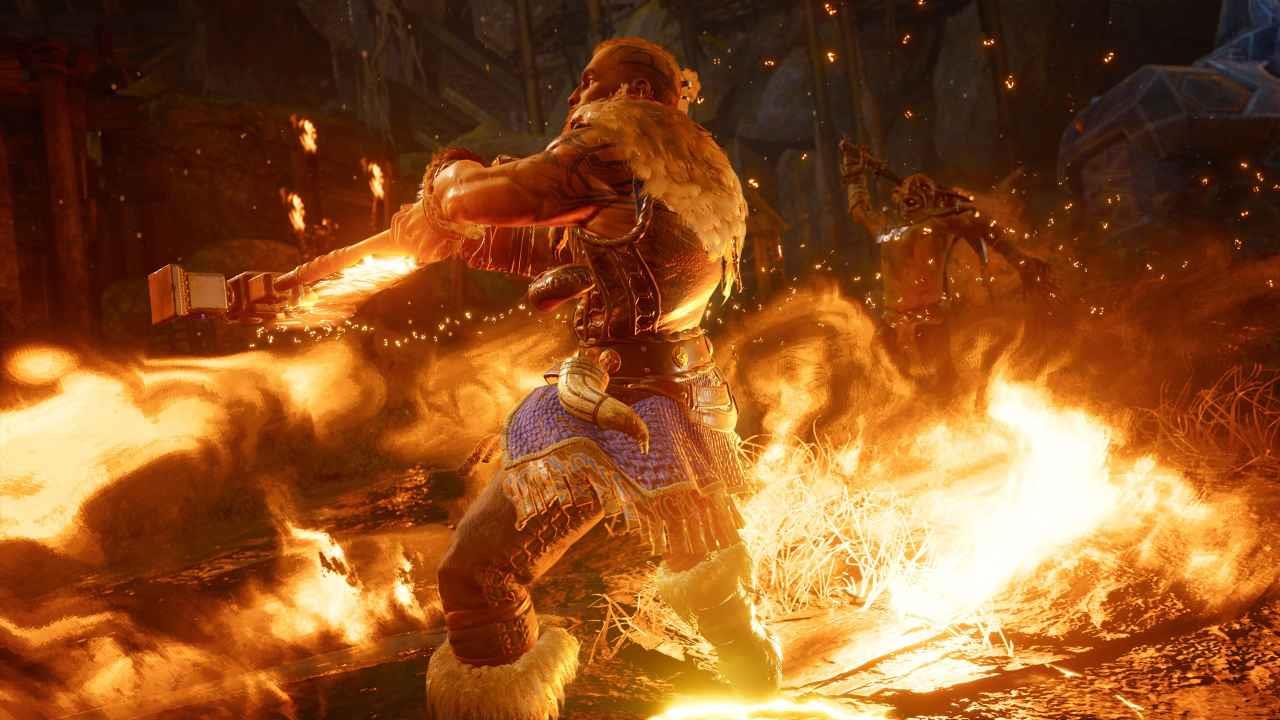 I knew the game wouldn't be the end-all be-all, but I did expect it to at least be functional. Dark Alliance has a pretty great pedigree. Based on the classic (and I’m pretty sure still ongoing) series of fantasy books by R.A. Salvatore, Dark Alliance had a wealth of content to draw from. For the uninitiated, the four characters in the game are okay—kinda all melee-based without any casters in the group. But to Dungeons & Dragons fans, Drizzt, Catti-brie, and the rest of the gang are giants among fantasy literature characters, right up there with Frodo, Aslan, and Tyrion Lannister. Bottom line: If you are going to put these characters in a game, you’ve got to do right by them, or you’ll be poking a thorny hornet’s nest of fandom you don’t want to rile.

And while the characters look like stylized approximations of their literary counterparts, much of the lore and in-depth world building is lost in translation. Sure, some scenarios and characters are brought in for cut scenes, but the actual gameplay is strictly “wander the dungeon, find the boss, kill the boss, sit through long tally screens.” Some of the enemies talk among themselves in amusing little conversations that continue even after they are dead, but that doesn’t go a long way towards making the game world feel real or lived in. So does this game hold up as an adaptation of the Drizzt books by Salvatore? Barely. 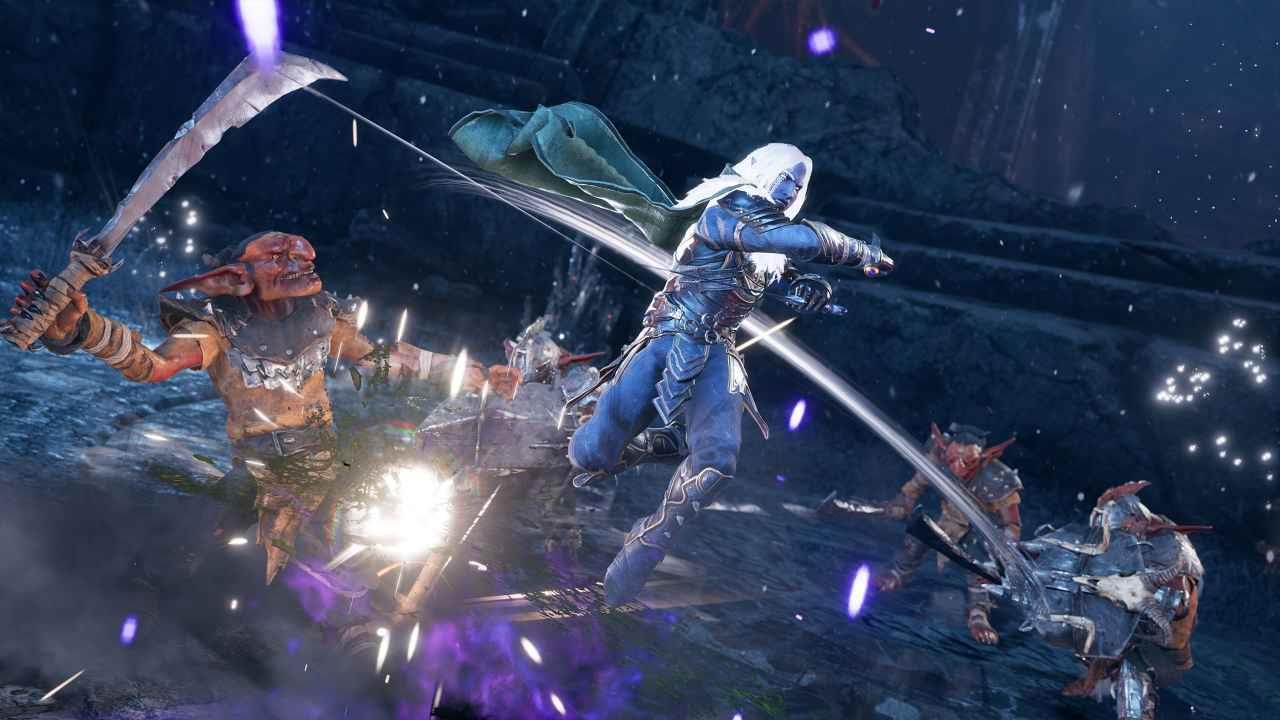 There are so many touches that make Dark Alliance feel unpolished, from the super-long power cooldowns to the way that enemies knock you down and then gang-smash three quarters of your life away before the animation allows you to stand up. Your stat increases, which should be immediately noticeable, barely register compared to the increase you get from new gear. When you clear certain areas, you are able to either take a short rest—refreshing your potions and health, or increase your odds of getting rare loot drops. You might as well take the rest, because on certain levels I was five increases deep and was still pulling not-so-sweet green drops. Which, of course, you can’t equip while on a mission. And if you don't take the rest, you spawn back at the very beginning of the level if you die, which sucks to the extreme.

I’ve also got to mention that I was playing on PS5, and after a few hours I noticed that the DualSense controller features that everyone loves have not been implemented at all. There is no feedback on the triggers, for example, when you pull back on one of Catti-brie’s arrows. It’s a minor thing, I suppose, but I’m guessing that PS5 fans will expect it to be there. 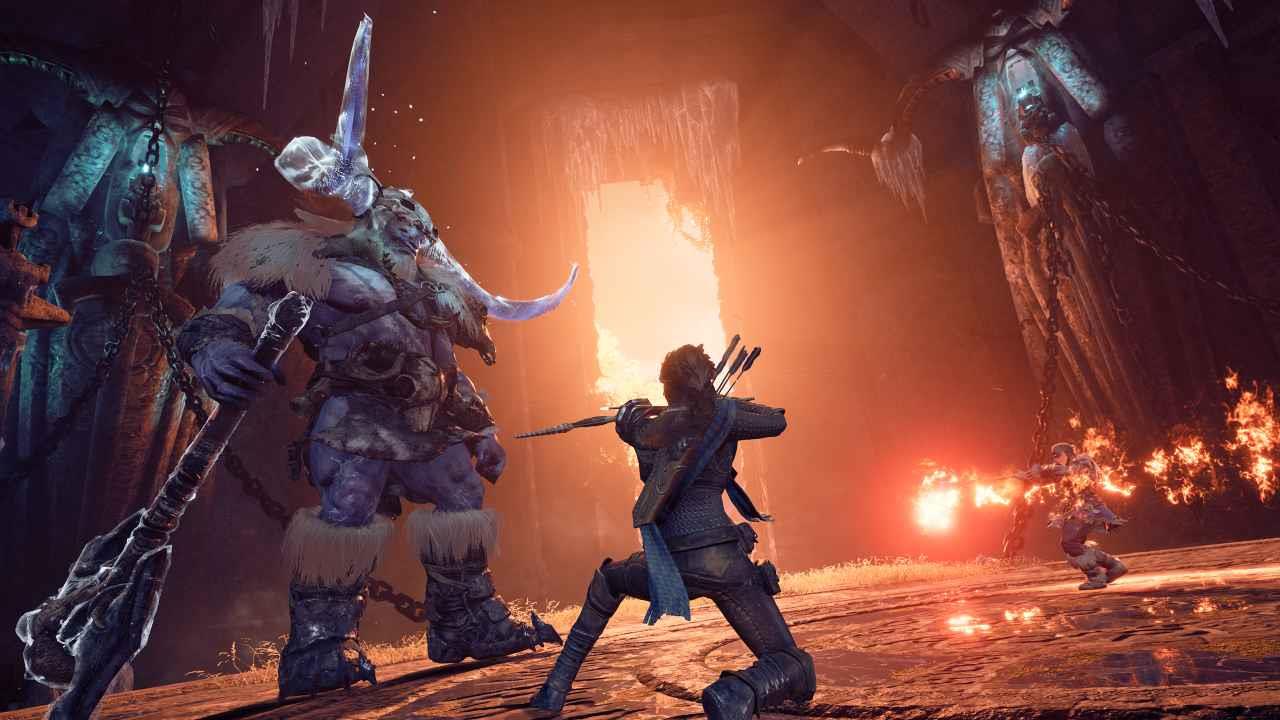 And yet, with all that is wrong with Dark Alliance, I had enough fun with it to play through it once completely with Catie-brie, and then halfway again with Drizzt. Sure, I was cheesing the hell out of every battle, but I was getting a certain grim amusement from doing so. Every now and then when the AI would kick in and enemies would actually fight back, I found it almost offensive. How dare they interrupt my “no damage without trying” run? But at other times, particularly when I was playing with Drizzt, the game felt downright challenging and fun.

Dark Alliance is divided into chapters, each of which contains three acts. In a small hub, where players can sell junk loot and test their DPS on dummies (actually, a very nice touch), there is a map where you can pick which act you want to jump into. All of the chapters follow the same pattern. There's a long first act, heavy on exploration and battle. A shorter mid-section, with slightly more robust mini-bosses. And a brief third act, where players face down the chapter’s final boss (see Hagedorn the Indecisive, above). After beating a level once, you can dip back into it in any order. There are around six difficulty levels, which make up Dark Alliance's endgame. Beat the level! Now, beat the level, but a bit harder! 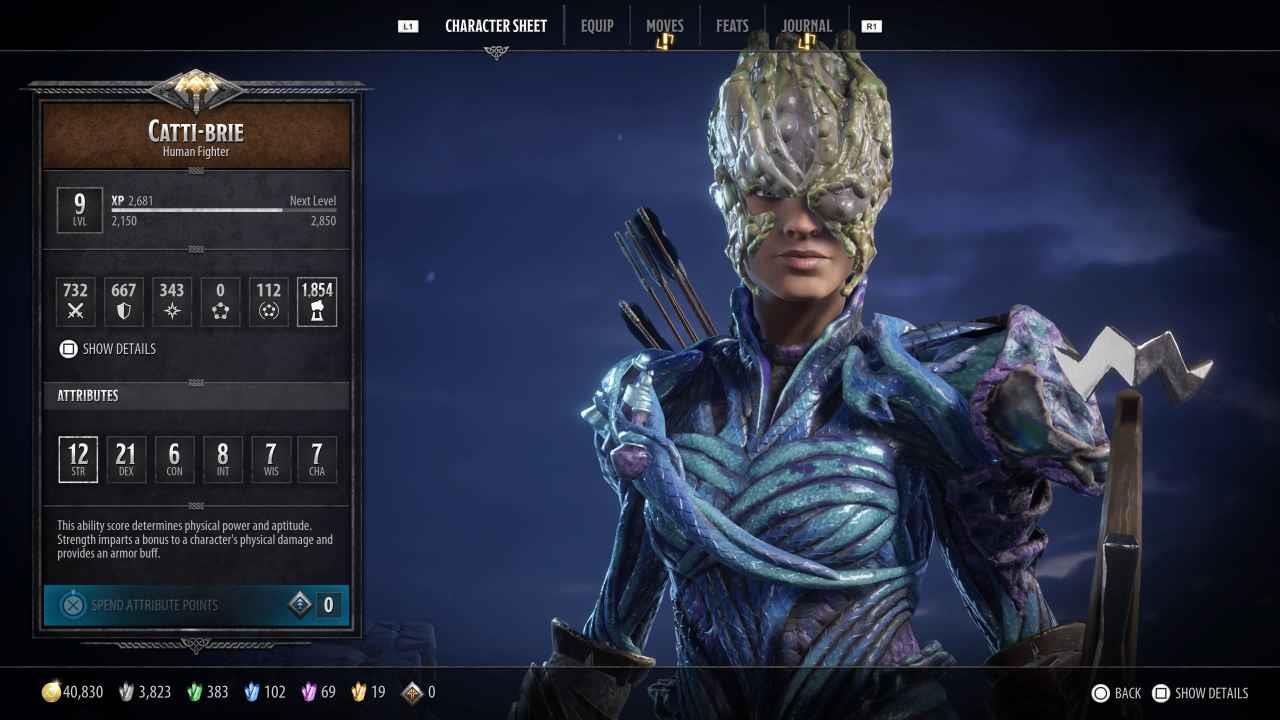 At least the gear is attractive...

I’ve played the entire game solo, and so I spent some time post-release to see if playing with a group of randoms would resolve any of Dark Alliance’s issues. And while the enemy AI kicks in more firmly when a dwarf walks up to a goblin and smacks it with a hammer, multiplayer has its own subset of difficulties. I don’t want to rail on the condition of the servers too much, because most games struggle in their first week. But connection issues, stuttering, and troublesome matchmaking are all present and accounted for. But it was still fun to run through some of these missions again with newer players, showing them where the treasures and secrets are hiding.

Once Dark Alliance is patched and the servers are stable, it will be a middle-tier AA game that will be fun to play through with friends. It is certainly an inauspicious entry as far as D&D games go, but as I mentioned, the core of a fun game is there. I only hope that players stick with Dark Alliance long enough for repairs to be implemented. There have been far worse games released that were eventually molded into good ones with time and love. It won’t take nearly as much work to whip Dark Alliance into shape—it is right on the edge of being legitimately fun. It will be interesting to go back to the game and play it once it is working as intended. I have a feeling the ability to blaze through the game solo will be gone, but some of the delightful, delicious merriment that make the game such a hoot will disappear along with it. I'm not sure which I prefer at this point.

Dark Alliance has the core of a fun game, but many design decisions and some very spotty enemy AI prevent the game from fully taking flight. While the game still feels early, there is some fun to be had running around and taking advantage of Dark Alliance's many issues. But with time, this game will become a mid-tier action adventure—which is exactly what it should be.