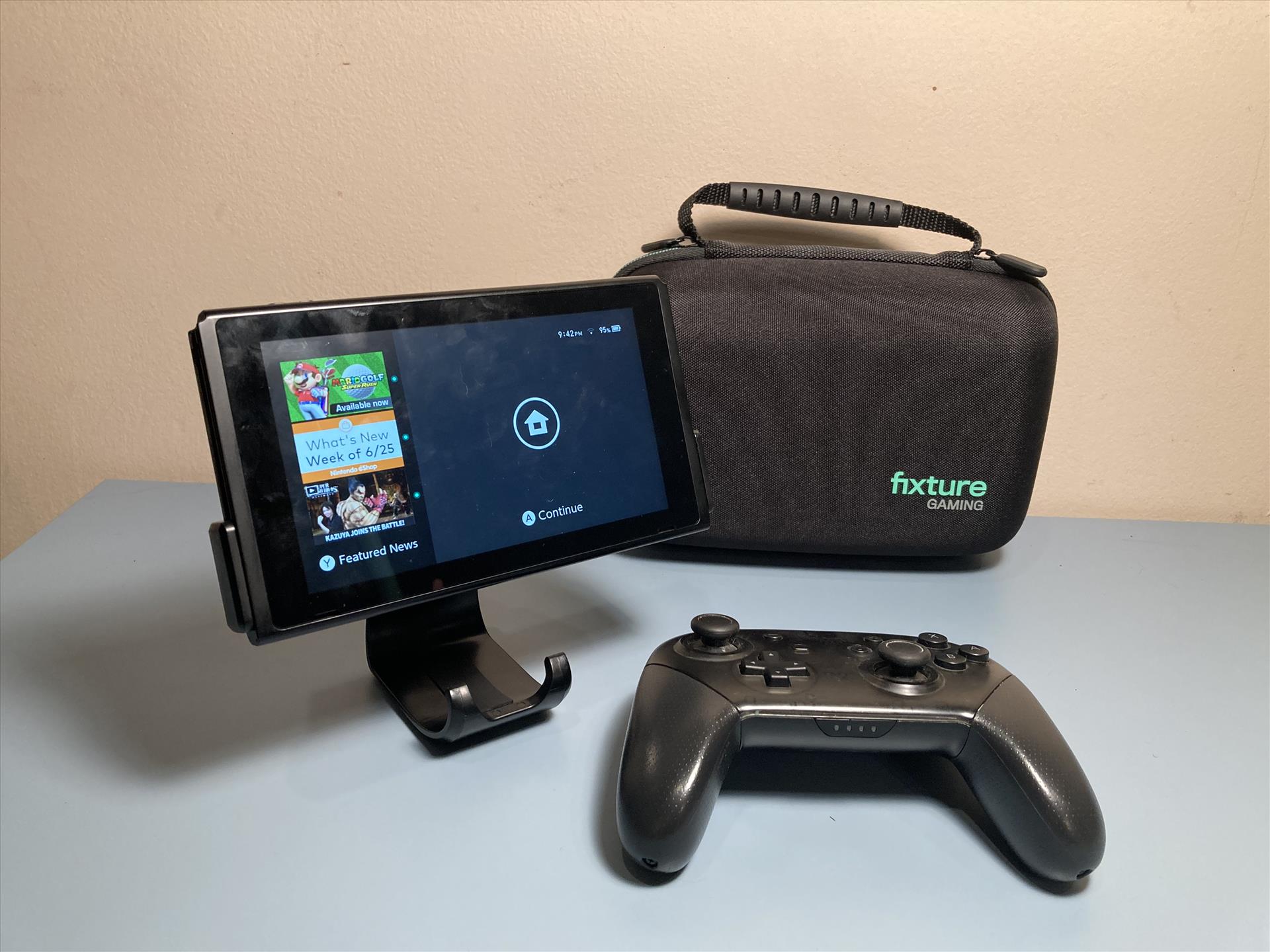 Written by Elliot Hilderbrand on 7/2/2021 for SWI
More On: Fixture S1 Mount and Carrying Case

I’m a Nintendo Switch kind of guy. It’s my go-to platform when I can choose which platform to play a game on - without question. I feel one of the features that draws most people to the platform is the portability. Switch is a handheld and a home console at the same time. I am not one of those people. I prefer to play my Switch in the dock mode almost exclusively. Call me weird, I understand. I find holding the Switch in portable mode to be cumbersome. I can deal with the system in short bursts, but more than twenty minutes and I just don’t like it. The system feels out of place in my hand, the flat surface of the back is just not enjoyable to me. In the past I have looked at alternatives to try and fix this issue. For the past few years I’ve been using a grip that makes the Switch bigger, but also makes it feel more like holding a controller. Luckily, the Fixture S1 has just solved my problem. 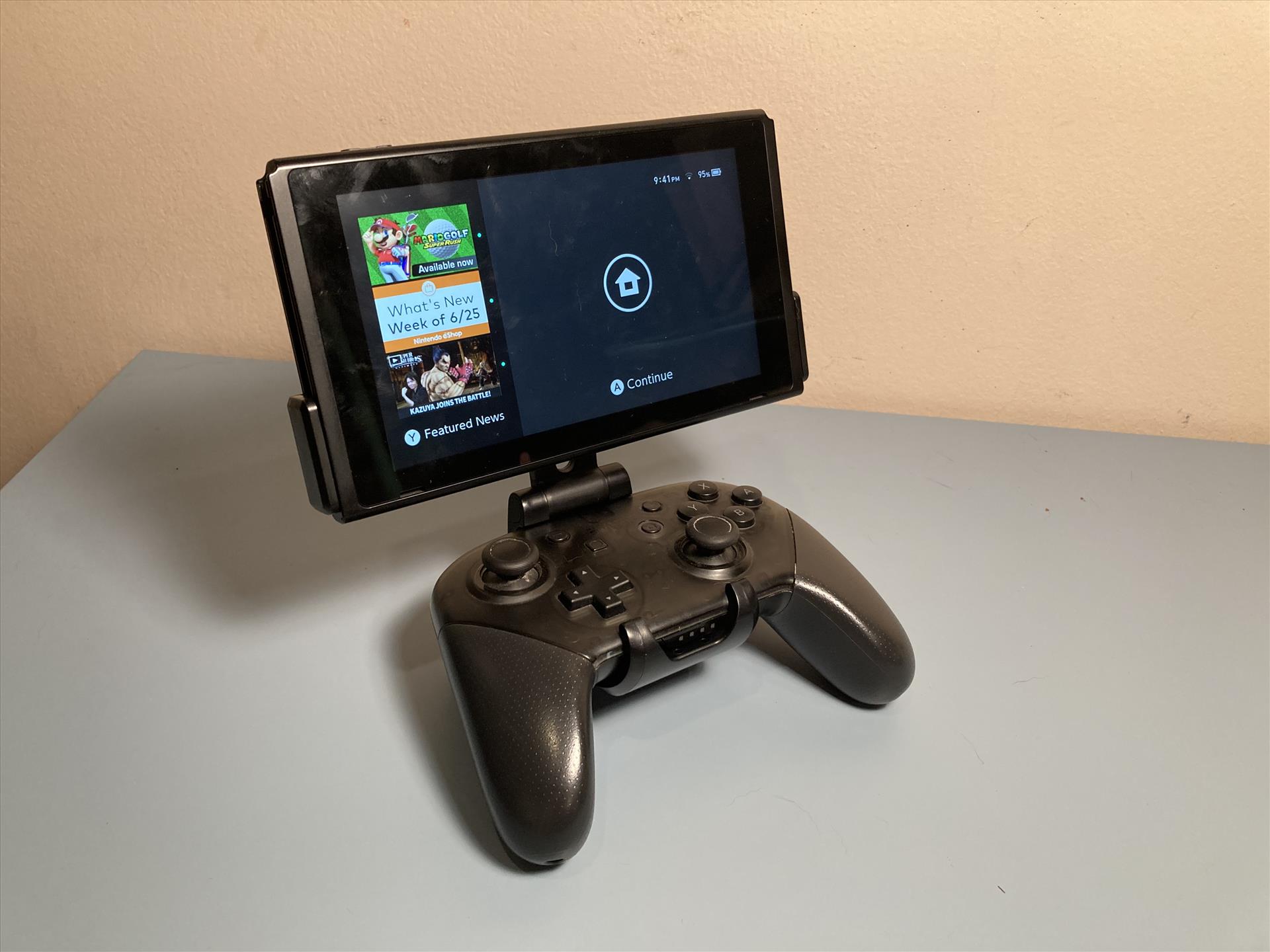 I enjoy the heck out of the Nintendo Switch Pro Controller. The way it feels solid in my hand, the ever lasting battery life; it is easily one of the top video game controllers ever made. Having the Fixture S1 Mount is a game changer. By taking the excellent Switch Pro Controller and pairing it with the S1 Mount I no longer have a problem playing in handheld mode. 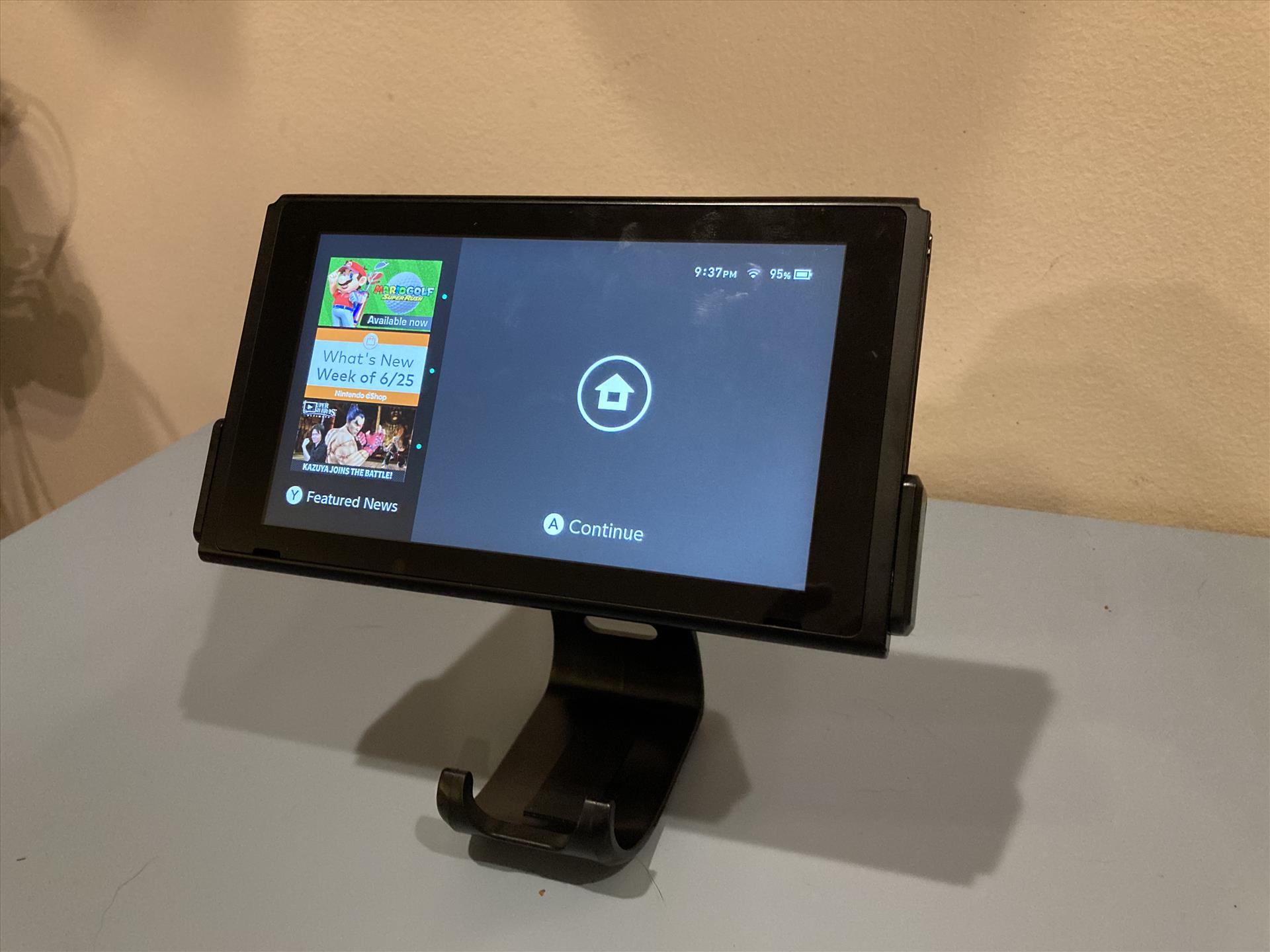 The S1 easily snaps onto the Pro Controller, and once it’s on, it’s not going anywhere. When the S1 is not attached directly to my controller the plastic feels a little thin and flimsy. But when it is attached to the controller, and the Switch system is docked onto it, I don’t feel that flimsiness at all. It might be because the S1 itself isn’t very heavy, which is great because when you are using it, you are holding a Pro Controller as well as a Nintendo Switch. The Switch itself goes onto the S1 without a problem, and feels solid. I did not experience any visible markings or scratches when putting either onto the mount itself, although the controller snaps onto the S1 so well that I was a bit worried the first time I did so, thinking it might get scratched when taking it off. I have taken the device on and off plenty of times now, enough to say that it is not something I am worried about doing. 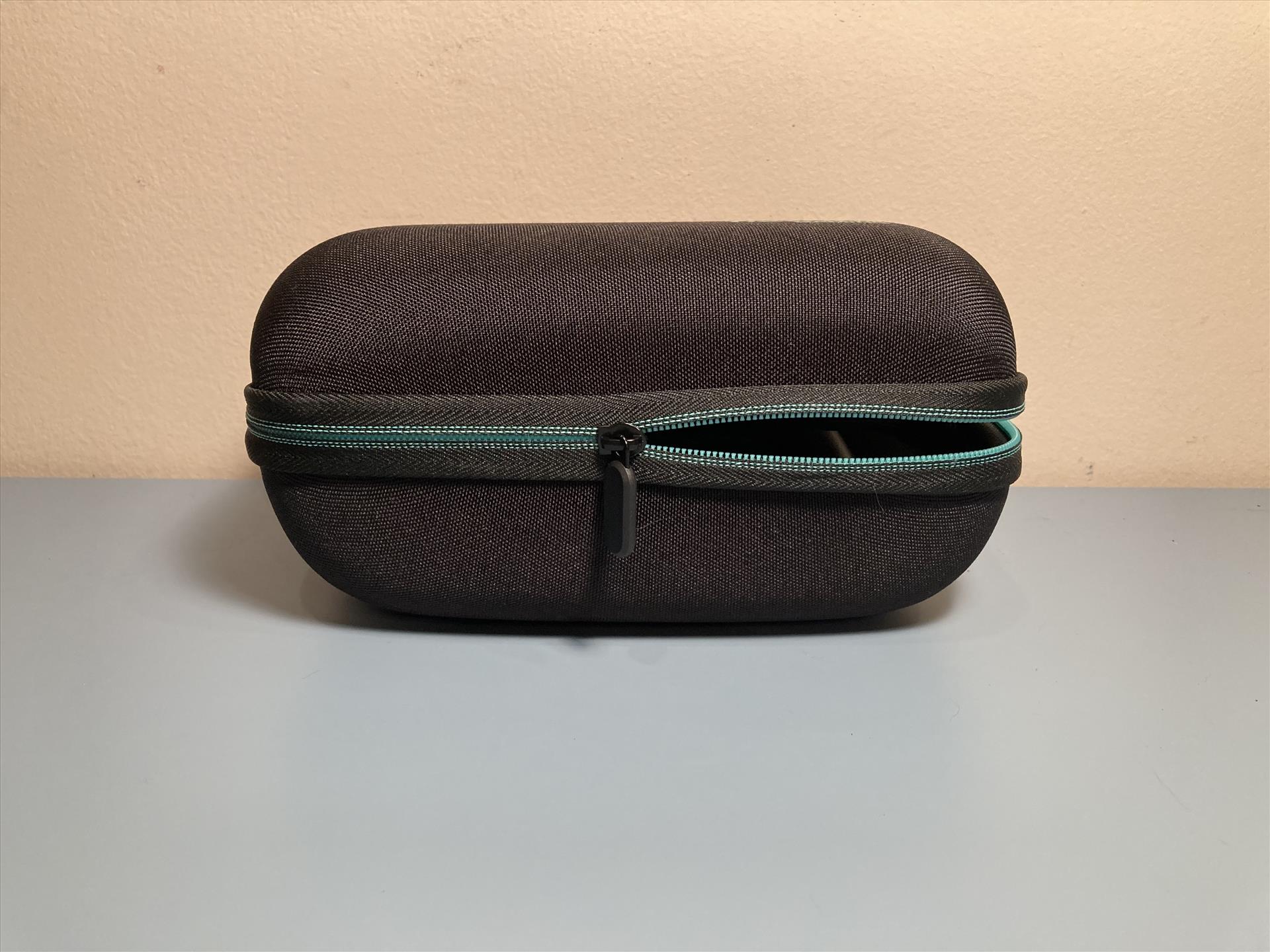 Holding the controller and Switch at the same time did not become encumbrance during any play period I had. The longest session I had was around 45 minutes, the weight never played a factor in taking a break from gaming, but I can imagine it affecting people differently. Being able to tilt the screen also helped with any glare that I would encounter going from room to room or having my wife turn on a light. The only drawback that some may experience is having to go out and purchase a Nintendo Switch Pro Controller since they do not come standard - but really, you should already have one of those.

You can also use the S1 mount to play in a tabletop mode, where the Pro Controller is not attached to the mount, instead the mount and Switch are sitting on a desk. While this mode isn’t for me (I would just dock my system) it would work well if I could not use my television for whatever reason. I found that the base, where the controller will sit in the handheld mode, didn’t do the best job of balancing with the Switch. There were a few times where the angle of the Switch would cause the mount to topple over. 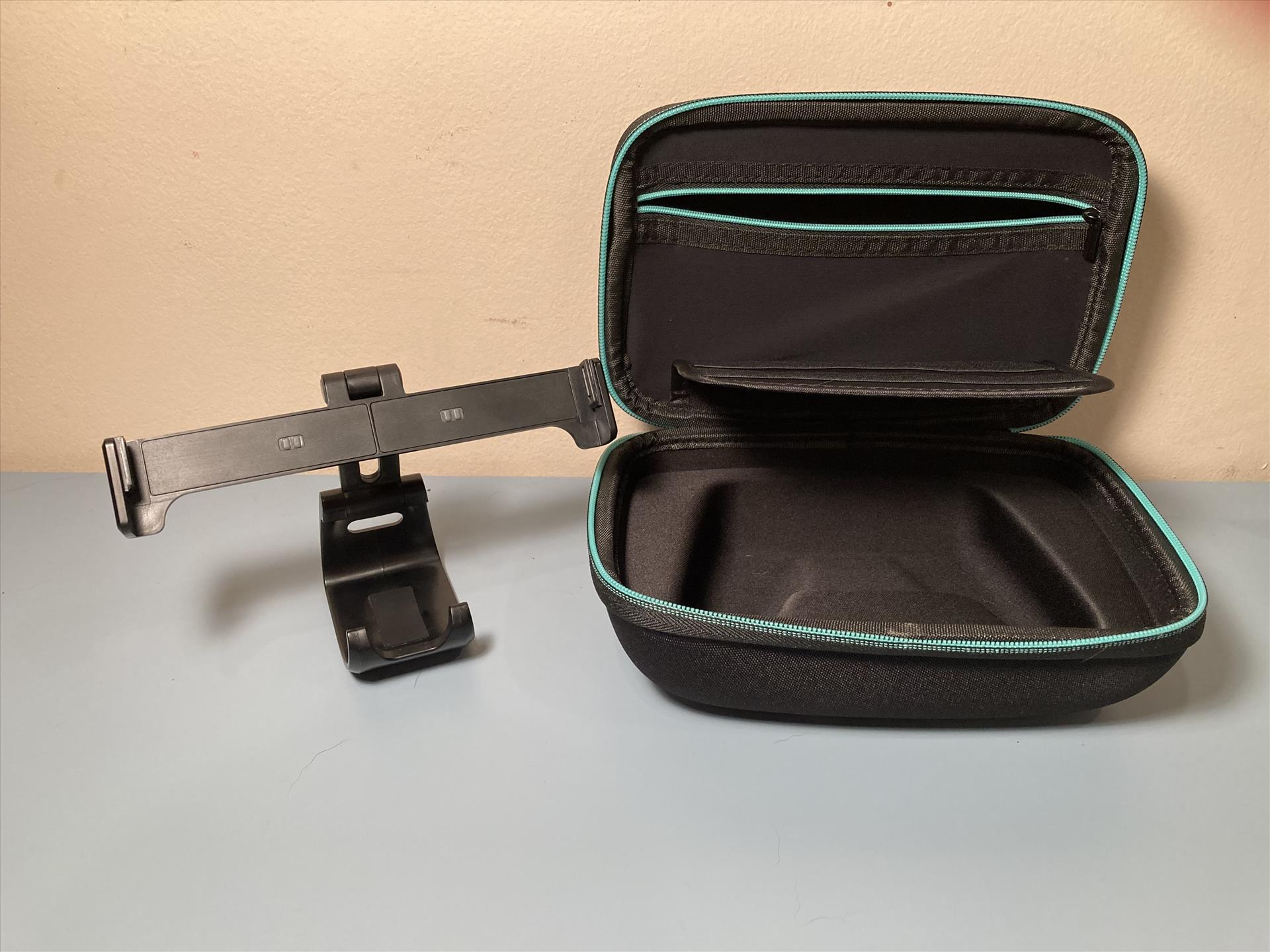 The Fixture S1 also comes with a carrying case. I find the case to be a mixture of a hard and soft case. It’s hard to find excitement over a case, but I think the case is the weakest part of the Fixture S1. I’m not 100% sure the case would do its job if my Switch went tumbling down to the ground. While the case will hold the Pro Controller, Switch, and mount all at the same time, it is not a comfortable fit. I have to really pull on the zipper to get the entire unit closed. I can tell that the screen is not being scratched because of the soft material on the inside, but the mount is pushing up on the joysticks of the Pro Controller in a way that makes me feel uncomfortable. The case has space to store Switch cartridges, and a zipper pocket on the inside that could house a pair of joy cons, or a charger, perhaps even both if you’re willing to be adventurous, but again, it would be a tight, worrisome fit to cram everything in there I could. If at that point I need a charger and Joy Cons, why not take something a bit bigger and just take a dock and HDMI cable as well. 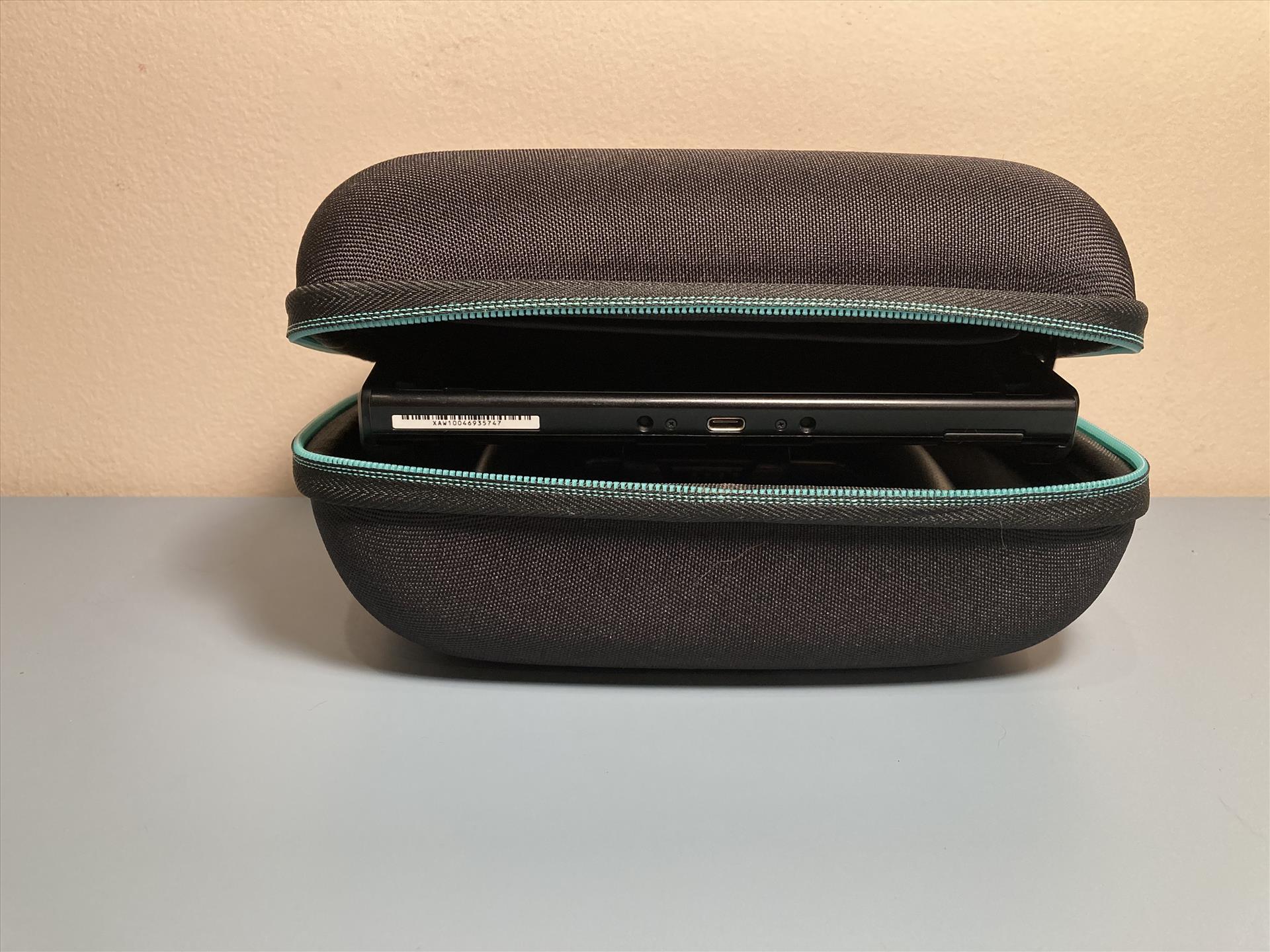 I have enjoyed my time with the Fixture S1 Mount and carrying case. So much that going forward, if I am going to play my Switch in handheld mode it will be while using the mount. I’m not the biggest fan of the case. I have no problem using it as my travel case when driving out for a weekend getaway with my wife, but I probably wouldn’t use it as my go to case if I were putting my Switch in a carry on and going to the airport, or tossing it in my backpack and walking around with it all day. But to me, the case is secondary to the Mount, which alone is well worth the cost of the Fixture S1.

The Fixture S1 has solved the issue I had with handheld gaming on the Switch. By allowing me to use the near perfect design of the Nintendo Pro Controller I no longer have to endure holding a Switch and not having the support I was looking for. Playing in docked mode is still my preferred style of playing, but if I’m going to play in handheld, it will be with the Fixture S1 Mount.