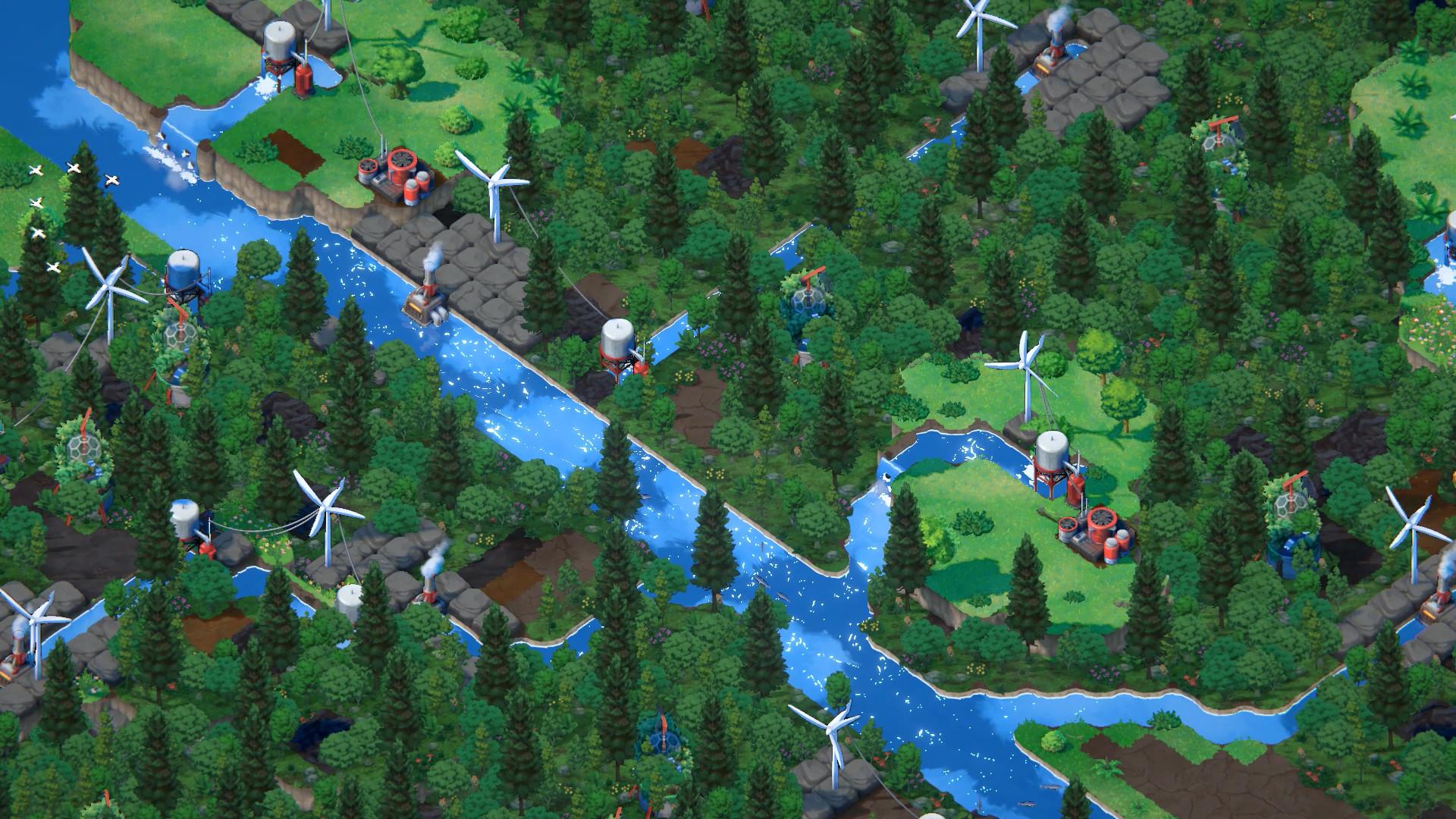 Terra Nil is the most subversive city builder I’ve ever played. All somebody had to do was completely flip the city-builder sim on its head. Just do a 180. A complete turnaround. Make itself unrecognizable. That’s all anybody had to do.

So that’s what Terra Nil did. 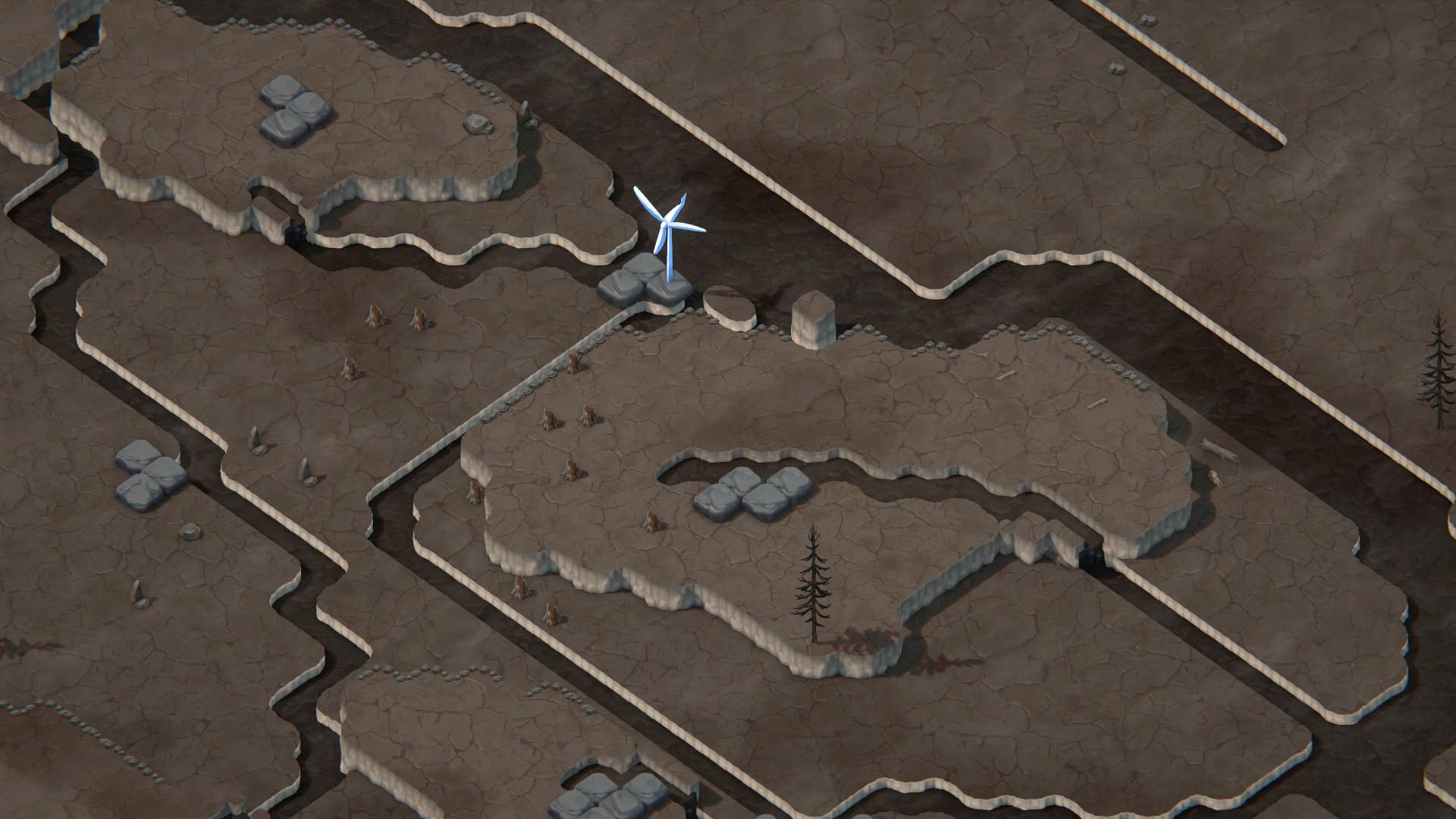 You start off with a brown, dusty, and windswept landscape. Empty riverbeds, dried-out waterfalls, and cracked earth hint at none of the lush nature that must’ve once blanketed this land. But you’re about to change that.

It’s implied that it’s mankind’s fault things got this bad. Nature didn’t do this to itself. Humans did. But with the rejuvenating power of green science and recyclable technology, you’re about to change all that. You’re about to flip this wasteland on its head. Do a 180. A complete turnaround. Make this desert unrecognizable. That’s all that has to be done.

So that’s what you do. 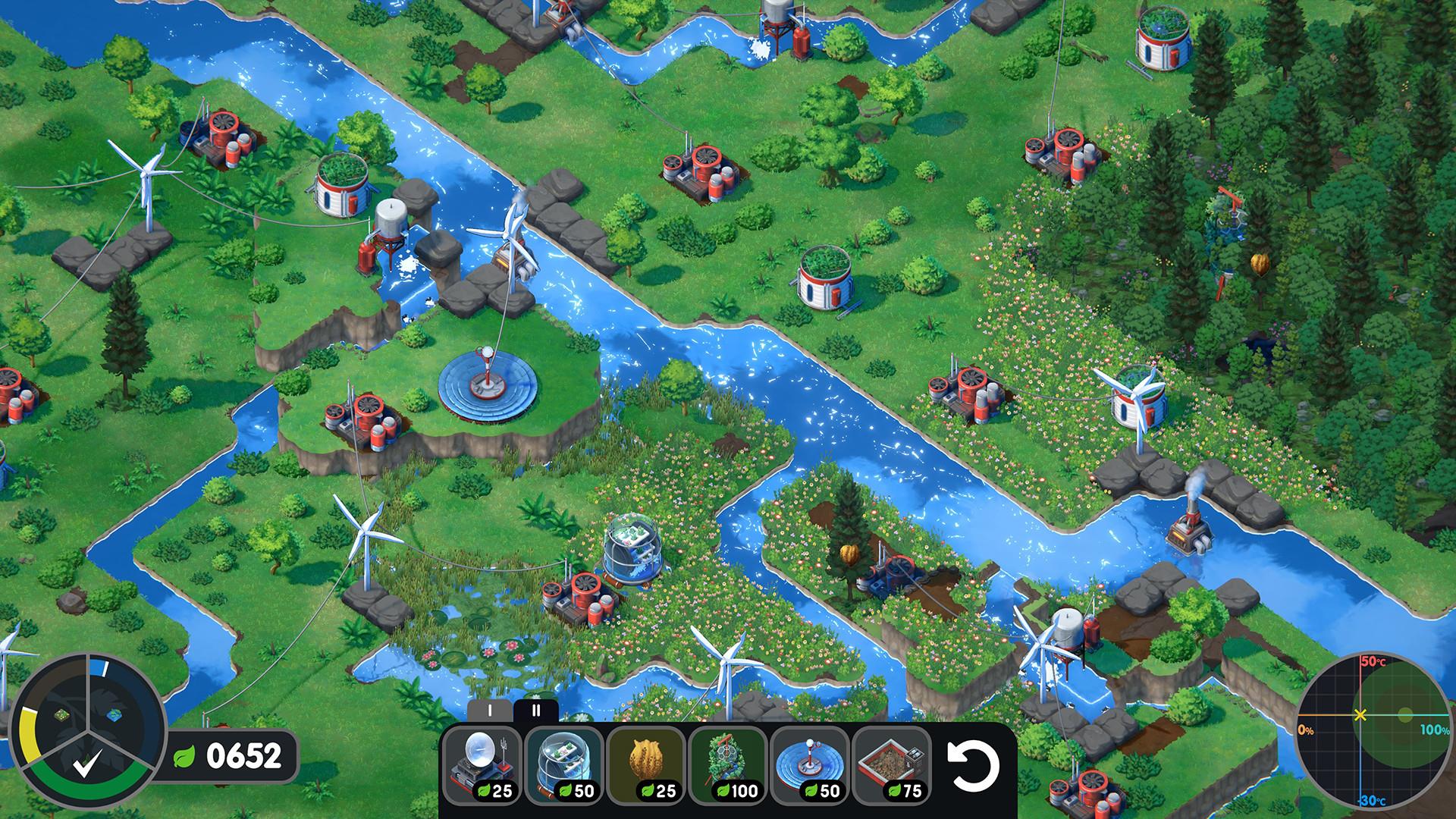 On some rocky knoll you place a wind turbine, harnessing those winds blasting across the landscape. Then you place four toxin scrubbers, reaching out as far as possible from the turbine. Those toxin scrubbers churn a radius around themselves, turning the baked clay into good dark soil. Then you place an irrigator. The irrigator sends out a massive wash of water across the soil, turning it into greenery. Grass, trees, and shrubs now coat the ground in either a long football field length, or in an L-shaped Tetris piece, depending on how you configure those sprinklers. Already nature is healing. But not by kicking humans out; by humans removing themselves from the picture.

At first, the birds return in their V formations, a silent Roman numeral of white feathers crossing the sky. Then you place the beehives and the bees gather, turning greenery into “fynbos,” which I hope means “flowery meadows” in Latin or something because they sure look like flowery meadows to me. You turn your irrigators into hydroponiums, converting the greenery near your waterways into wetlands, all cattails and lily pads. 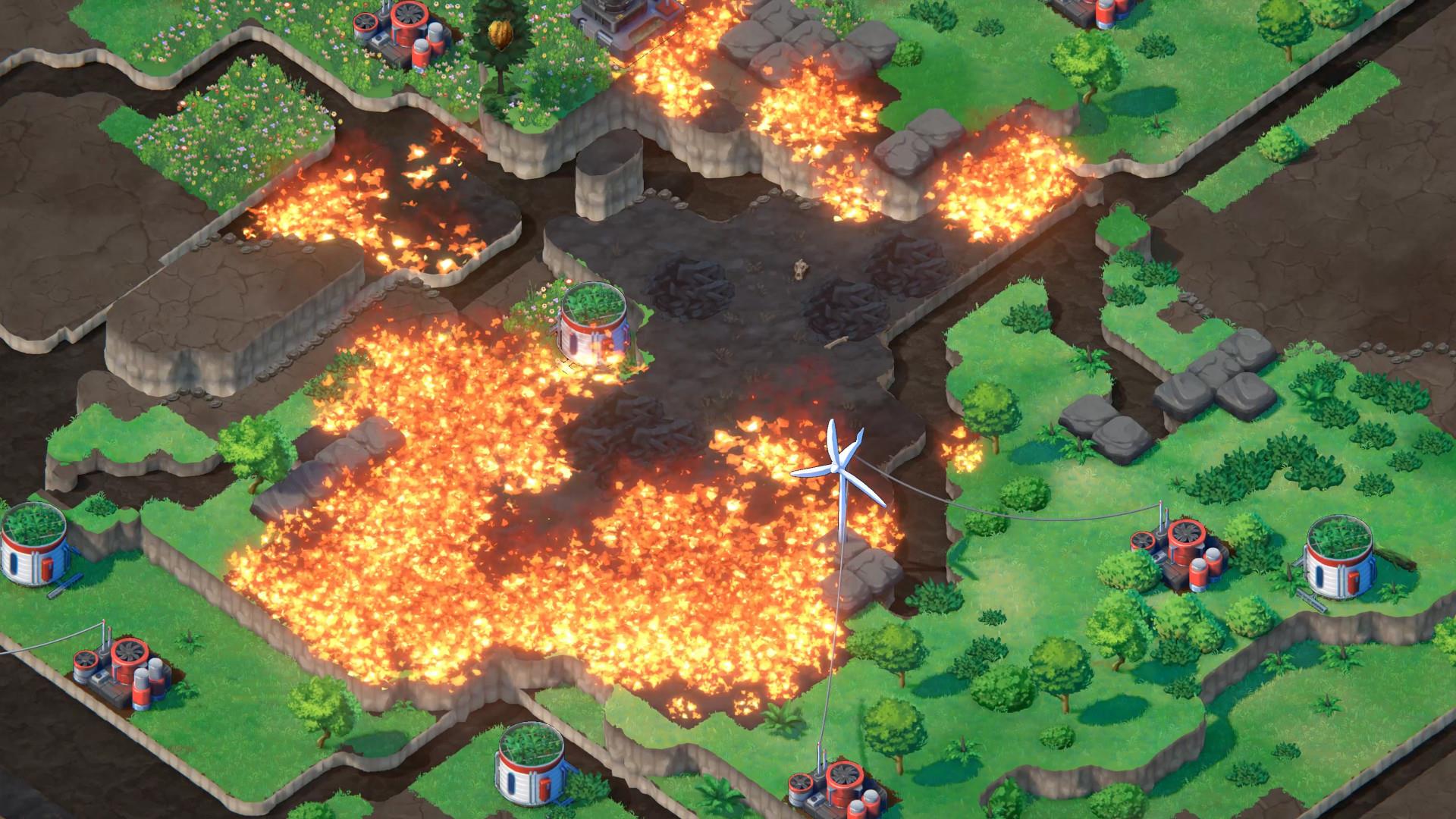 Then comes the scary part. The controlled burns. With a solar amplifier and a dessicator—two items that sound like they got us into this trouble in the first place. The amplifier works like a magnifying glass, and the dessicator works like a ball of hyperflammable material. There’s a space-age buzzing sound, and then fire burns across your landscape. Buildings gone. Fields of greenery and fynbos gone. The only thing stopping it being wetlands and waterways.

That’s okay. This is part of the process. It took out your turbines and irrigators and hydroponiums, but left behind nutrient-rich ash. The building husks are now where you build arboretums. Arboretums spawn forests, rich with both evergreen and deciduous trees.

With biodiversity restored, now you see the deer grazing in those fields. You hear the frogs croaking in the wetlands. You’ll even catch a bear roaming the woods between the beehives and the mushrooms, and fish swimming in schools as far as the river will take them.

This is the part where I zoom in and take in the nature I’ve restored. It’s hard to not to look for a Remove HUD button so that I can screenshot the progress I’ve made. This is peak harmony, between man and nature. The land, so bleak and brown and lifeless in the beginning, is now lush and green and teeming. The hydroponiums spin their ferris wheels of plants. Plants line the greenhouse windows of the research center. Irrigators’ entire roofs are crisscrossed with plants. The water pumps pour out tiny waterfalls into the creeks that shine with sunlight, reflecting white puffy clouds you can only see in the water’s surface. Even the soundtrack has embellished itself, going from that pretty yet sparse piano pluck to a fuller melody that starts to soar.

But then I see the toxin scrubbers. As noble as their work was, churning that dry-baked earth into rich soil, the manmade-ness of it all starts to sink in. The calcifiers along the river that turned riverbanks into rock, start to grate with their steam plume rising up from a smoke stack. And you might even start to see the wind turbines, those paragons of green energy, turn themselves into eyesores that clash with the geese in flight.

It’s time for me to go. Which brings us to the third stage of this scenario. Stage one was Make Green. Stage two was Burn It Down. And now stage three is Wrap It Up. So, you build an airship. Not completely. Just the frame of an airship. The rest will be built with recycled materials—as you break down all your previously made structures and turn them into recycled materials. It’s less scary than the controlled burns. 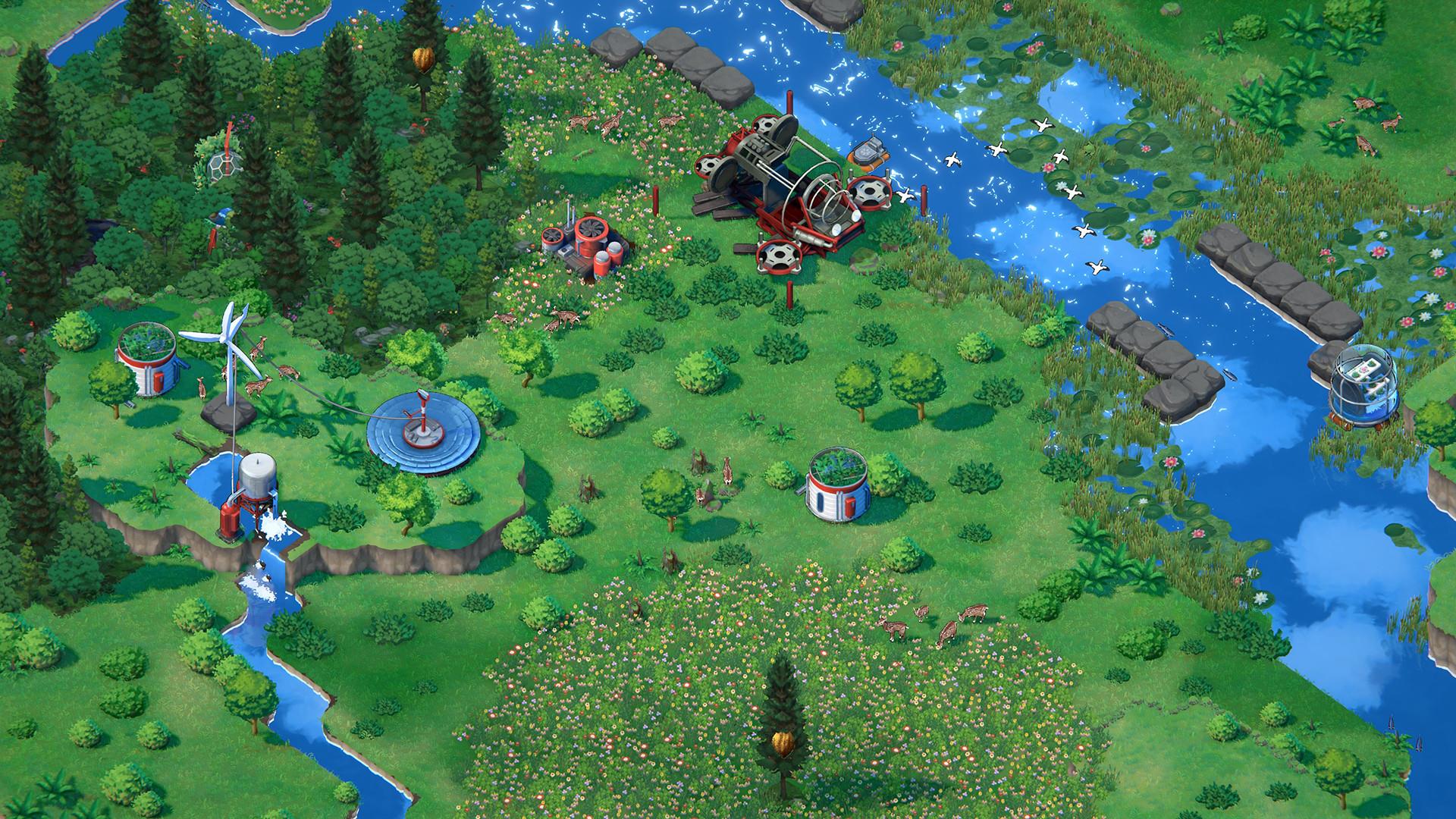 While you are often working with a clearly delineated radius, and while the tiles you’re affecting are almost always highlighted, there’s still a lovely randomness to how the greenery springs up. There are gentle variations on the maps you’re given, but, as far as the preview is concerned, there aren’t too many surprises. And that’s okay. Because when you complete construction on your airship, and it helicopters up and takes its little recycling boat with it, the camera zooms out to reveal an enormous planet with multiple continents. The temperature and humidity pylons are indicative that the scenarios increase in complexity too.

Despite the simplicity of this opening scenario, I still ran into the occasional hiccup. A couple times, after committing too much land to the controlled burn, I found that I no longer had sufficient flowery meadows to create the biodiversity the game wanted before letting me move on. I had to restart.

A couple other times, the game had trouble with the pound locks—pound locks being the water elevators (I guess you could call them?) that lift and lower your recycle boat along the rivers. You need them to get up and down waterfalls. I’d buy the pound locks again, and then it would be fine. Nothing terrible. Just hiccups. 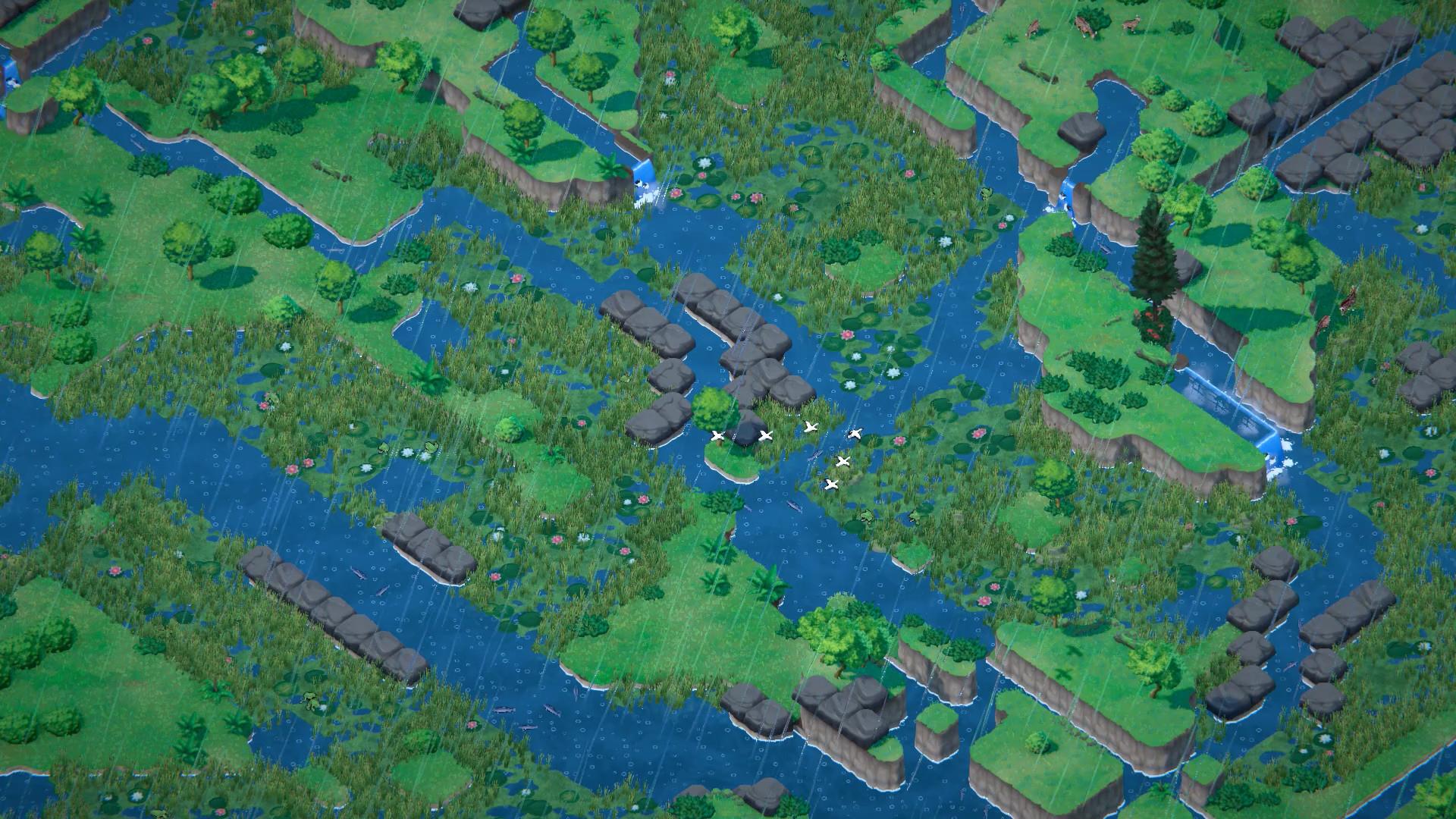 During your time in Terra Nil, you won’t see one person. At least not in the preview. Your structures spontaneously appear. Your little recycle boat is a drone. Your airship that flies you off into victory is seemingly piloted by ivy leaves. This game, if we're going with Latin, shouldn't be Terra Nil. It should be Homo Nil. Homo meaning human, you 12-year-old. Because man's presence is what we're utterly removing here.

Terra Nil is a wonderful spin on the city-builder scenario. Instead of watching traffic inevitably jam up, or watching crime soar, or seeing pollution spread, you’re doing the opposite of all those things. Sometimes this makes me conclude that people are the worst. I fall into the trap of thinking that humans are a virus. Other times I conclude that, hey, it was humans that restored this whole area to nature—regardless of whether or not we created the problem in the first place. And that was a much nicer conclusion to draw.

The demo for Terra Nil (the same one I played) is free on Steam right now. Launch is to be announced. I'd love to see more.