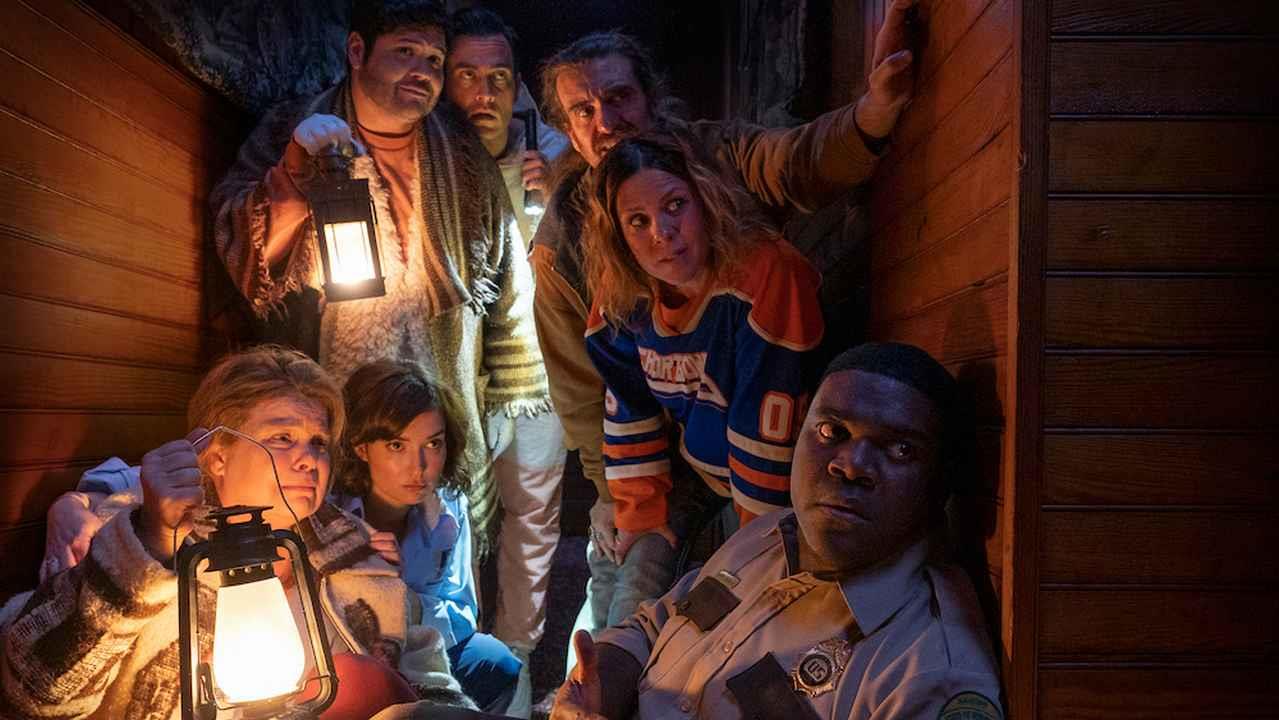 Of course, a lot of folks outside of gaming circles will simply assume that Ubisoft is just another film company when they see that logo. As gamers, we know all about Ubisoft, but I’m not sure that the company has crossed over into household name status with the public at large. Unless you went in with prior knowledge of the social deduction game the film is based on, you would have no idea you were watching a video game film – which is perhaps Werewolves Within’s greatest success. It uses the core of the game as the beating heart of the story, but elaborates on that core so successfully that the film is unrecognizable as being part of the game’s world. 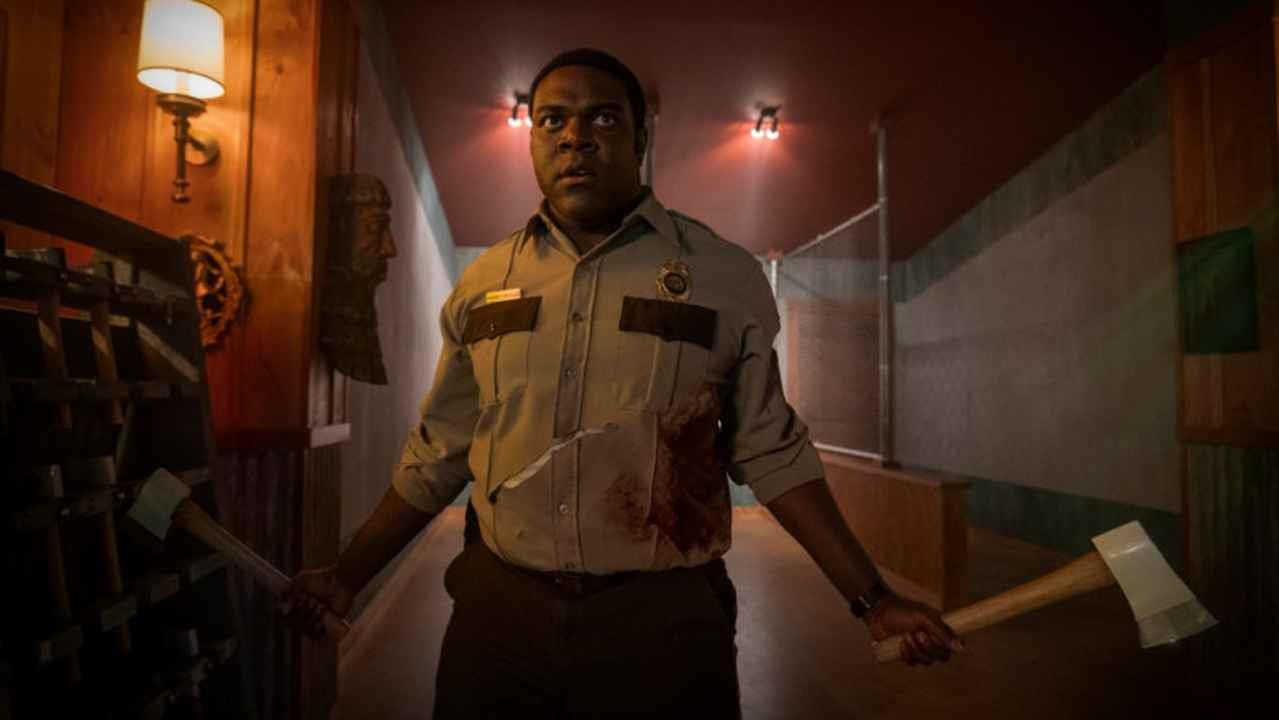 In Werewolves Within (the game), players plop down into an old-timey VR village, dressed in pilgrim gear and sitting around a fire in a circle with a bunch of randos. Everyone knows that a few of the players are werewolves, but only the werewolves know who they are. Discussions ensue, accusations are made, innocent villagers are accused, and sometimes the group successfully zeros in on who the werewolves are. It’s a lot of fun, and taking with strangers is surprisingly natural once you get used to it.

The film version ditches the old-timey setting, but keeps the small village, the accusations, and the eventual revelation of the werewolves’ identity. There is even a scene where the characters sit in a circle, slinging barbs at each other and calling others out for being sus. It is a fun and cheeky inclusion in what amounts to a pretty light and entertaining film.

Things in the tiny town of Beaverfield are just starting to go off the rails when forest ranger Finn (Sam Richardson) arrives to his new post. He is quickly befriended by Cecily (Milana Vayntrub, who should totally be in a ton more movies), a postal worker who has just been in town long enough to get all the hot gossip. Cecily gives the newly arrived lawman a tour of town on his first day, effectively introducing all of the primary characters and their conflicts and motivations in one tidy little scene. 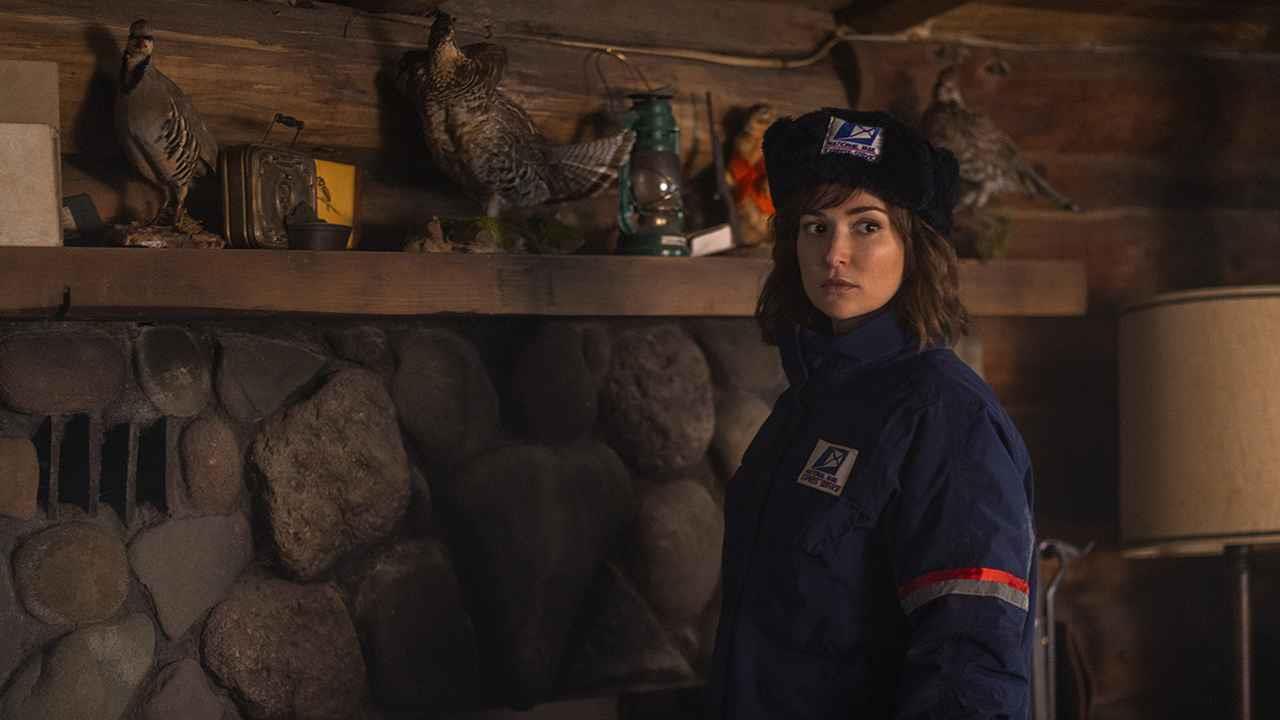 Said characters border on cringey stereotypes at times, but the fact that they are played by a recognizable and generally delightful supporting cast (and the fact that the film is clearly a farce) helps gain a bit of forgiveness for what might be seen as some dubiously offensive characterizations. There’s the wacked-out hill-folk townie couple, the wacked-out less-hill-folk-but-still-crazy-in-other-ways townie couple, the yoga-loving rich couple from the city, and the sweet, mournful woman who runs the inn. There’s also a somewhat unstable tracker at the edge of town, and an oilman who is in town trying to convince everyone to sign off on a pipeline that would run through everyone’s property.

Tensions are already high in Beaverfield, with various factions sparring over the pipeline thing when a storm hits the town, cutting off power and all contact with the outside world. And of course – as happens – there is a werewolf among the group. Over the course of one long night, discoveries are made, red herrings are thrown about, old resentments rise to the surface, and werewolves get on with the werewolfing. 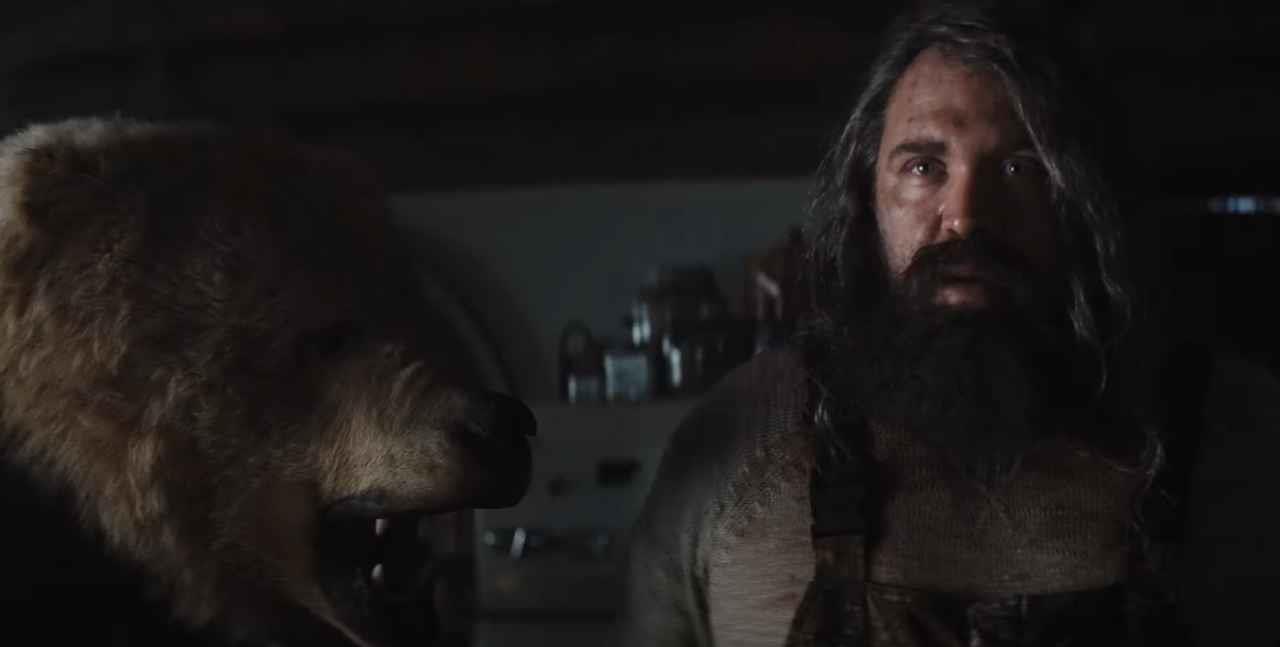 Though there are a few half-hearted attempts at jump scares, no one will likely find Werewolves Within terribly frightening. I was surprised to see how light on gore the film is, as similar films often go for huge gross-out moments to get a guaranteed response out of the audience. Instead, Werewolves Within relies on straight character work and comedic delivery to engage the audience.

Some of the characters work better than others, with the hillbilly couple getting most of the good lines. Whenever anything abrupt or major happens, they can be counted upon to be muttering some lunatic nonsense in the background, just loud enough in the sound mix to be heard. I also enjoyed Michael Chernus’s town pervert, who will take any opportunity to be a total creeper towards Cecily. 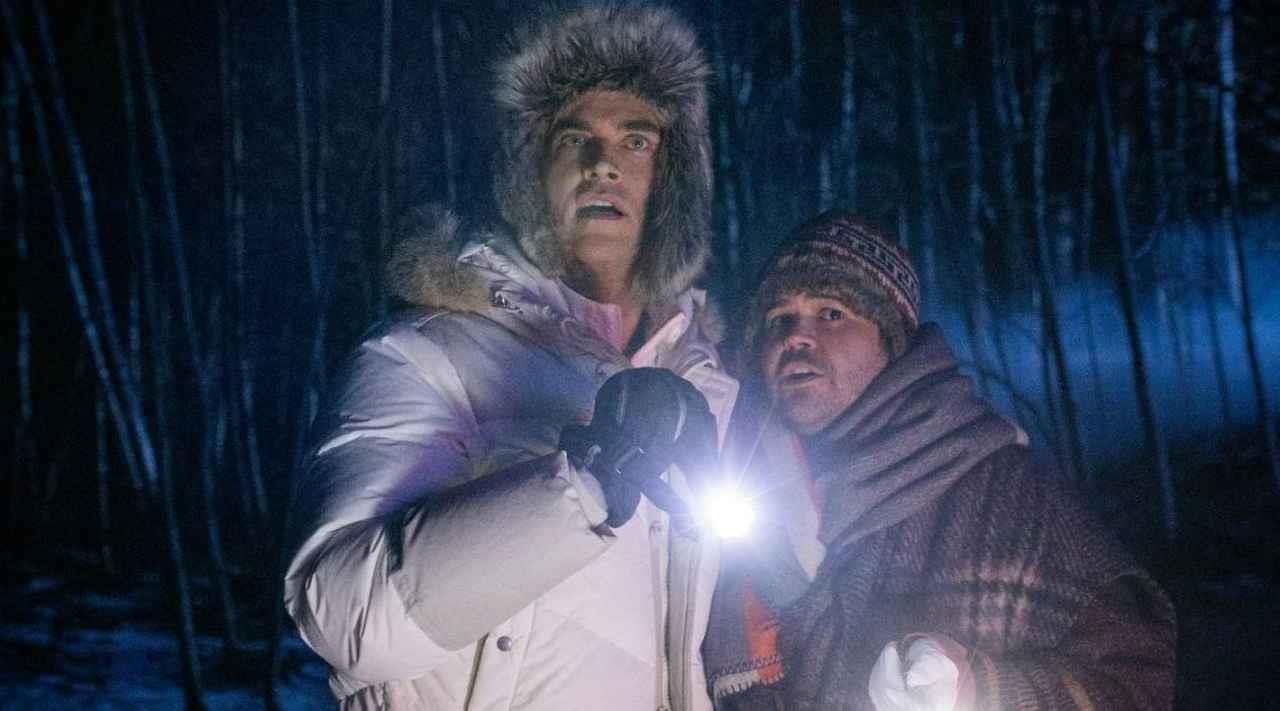 But at the center of the movie are Finn and Cecily, and it is their burgeoning relationship that gives Werewolves Within its sweet heart. Sure, things might seem to be progressing between them quickly, but relationships have been known to move fast in intense circumstances, and each is coming into the town with their own baggage and motivations, which might explain how they end up in a quiet bar together on the night they meet, throwing axes and singing along to Ace of Base.

As a comedy horror film, Werewolves Within works pretty well, and while it might not win any actual awards, it isn’t a far throw from the unofficial but highly coveted “Best Video Game Film of All Time” award. Werewolves is probably not quite as good as Sonic, but better than everything else. A great ensemble cast goes a long way towards convincing the audience to overlook some of the film’s rough edges, and Vayntrub is a breakout who should be given her own rom-com franchise immediately. Watch her react to the lunacy going on around her in the ensemble scenes. The laughs she gets out of simply cringing at the others are priceless. 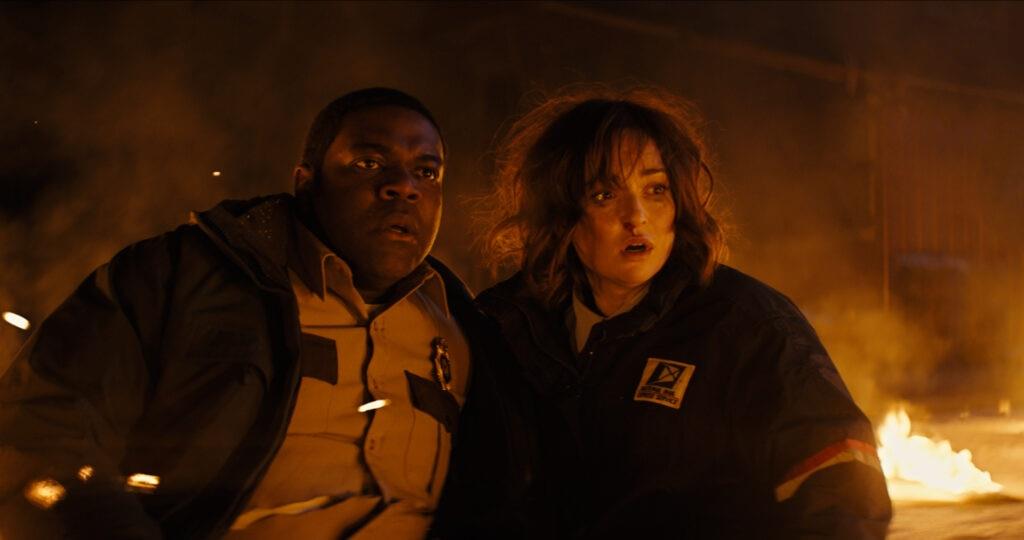 Of course, the big question here is whether or not I guess who the werewolf was. Were there enough hints in this lycanthropic whodunit for me to figure out the identity of the baddie? My suspicions swung wildly in a lot of directions before I settled on my culprit of choice. But saying anything more would spoil the fun, and I would much rather allow viewers to come to their own conclusions. Everyone is a suspect, but in the end, it’s gotta be somebody.

Ubisoft can go right ahead making more movies based on its IP, if this is the sort of thing we get. Rather than stubbornly sticking to the core material, Werewolves Within shifts the game dynamics around enough that they become accessible to a modern audience, resulting in a witty and fun little film.

Werewolves Within goes light on the horror and heavy on the comedy, relying on great performances to amuse the audience instead of leaning on gore. While some of the side characters' characterizations can border on troublesome, the film's light heart and farcical tone alert the audience to not take anything too seriously. Come for the laughs and the werewolves, stay for Milana Vayntrub, who walks off with the entire film.