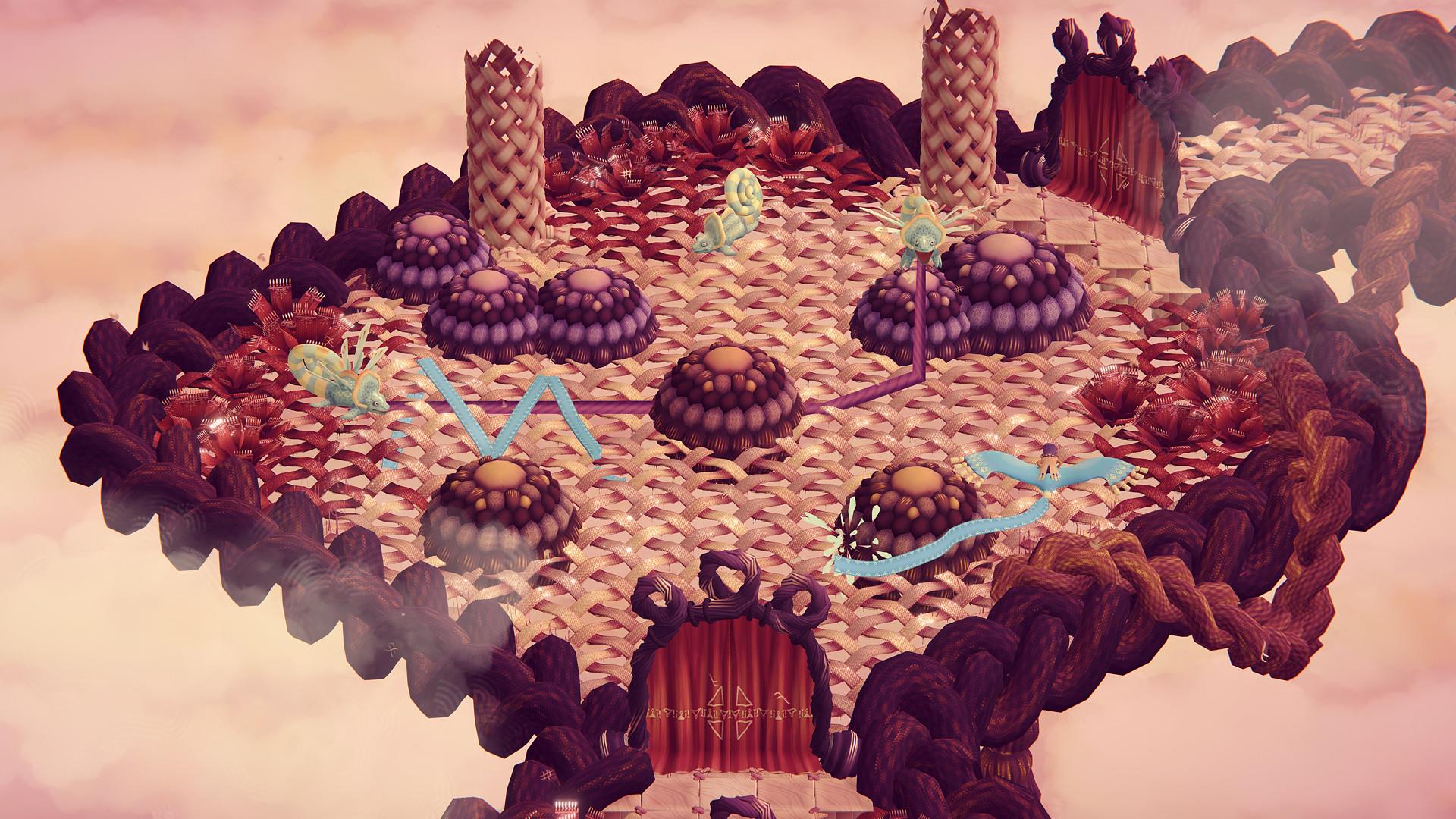 Written by Elliot Hilderbrand on 6/25/2021 for SWI
More On: Weaving Tides

One summer I took up crocheting. Why? No idea. For about two weeks I gave it my all before giving up, a hobby that was meant to be relaxing was anything but. Weaving Tides helps to fill that hole left from summers ago, a relaxing puzzle game. Three words I don’t know if I’ve ever put in that order. Indie developer Follow the Feathers has rolled the dice with Weaving Tides and it pays off. 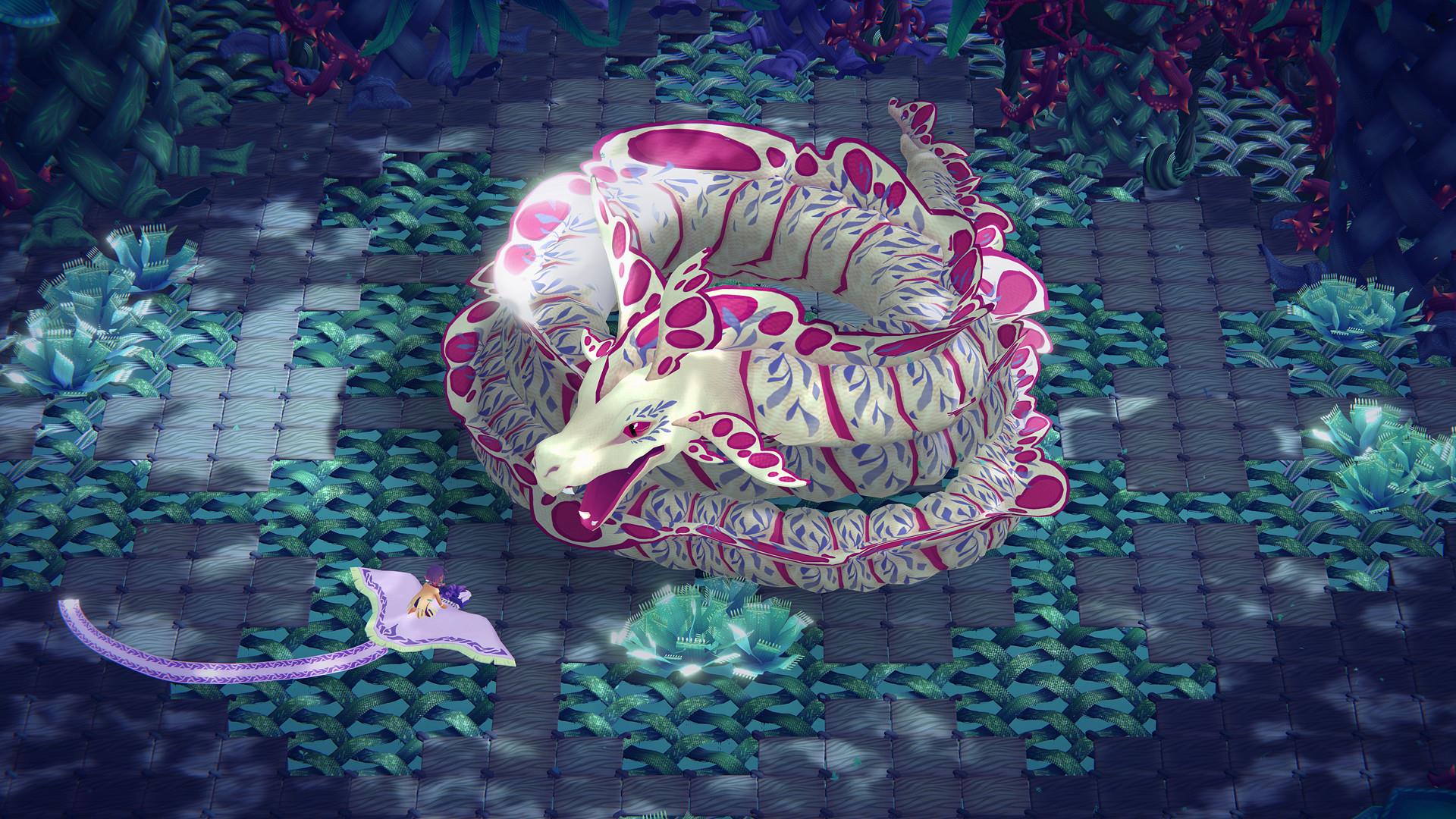 Weaving Tides looks like a living, moving textile. Now that may not sound like a compliment, but I assure you it is. The world floats between solid ground and textile that sometimes looks like silk, other times like woven reeds. While Tass is riding Kilim or another Weaver, he frequently comes across patches of textile that are torn or ripped, having to patch back up to help earn experience.

Weaving Tides is a story about family, either the one you are born into, or the one you create. Before the start of the game the protagonist, Tass, was adopted by a flying manta ray named Kilim, whose race are called Weavers. Weavers also have flowing tales they can use to patch up spots or the textile world you traverse. Tass just happens to be the last human on the planet, so he stands out like a sore thumb. 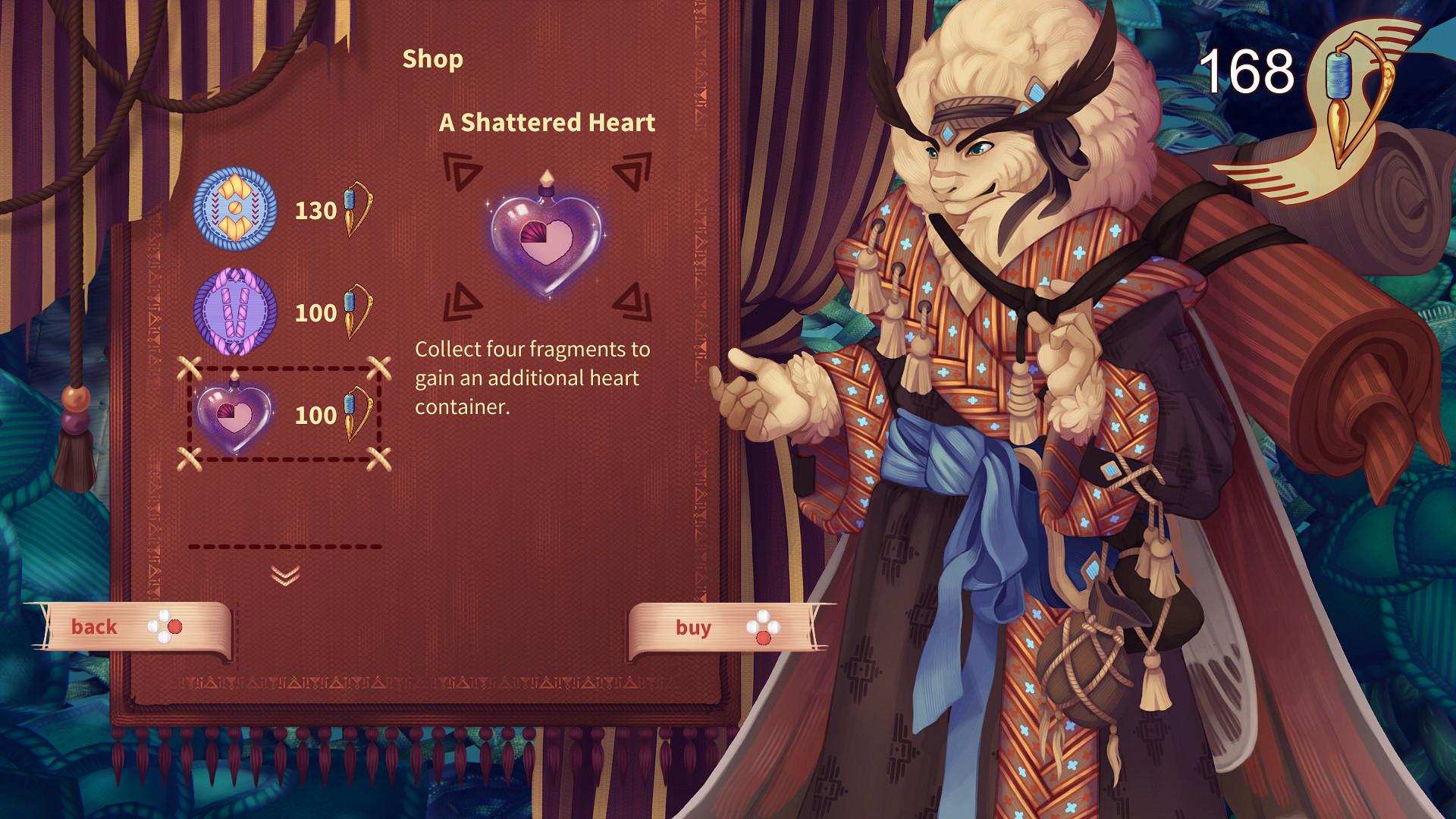 Early in the game dark weavers attack a village, sending Tass and Kilim on an adventure to solve what happened to Tass’s birth parents, and to humans in general. Kilim has some dad humor to drop along that way. The characters feel fleshed out, even if the story doesn’t always feel full and rich. Overall the story is a bit generic. It wasn’t a focal point that I gave much attention to while I was playing. All it served was to progress Tass from zone to zone to solve more textile puzzles.

Weaving Tides shines in the puzzle department, being both fun to look at and unique in gameplay. Puzzles start out as basic up-and-down, in-and-out patterns to weave through to create a design. As the game progresses more difficult puzzles and patterns unfold. On occasion I struggled to complete some without having to take a breather or just sit and look at the screen. Other times I felt like the poor camera angle was to blame and not my own ineptitude. Once you complete a puzzle the finished product is also interesting to see. 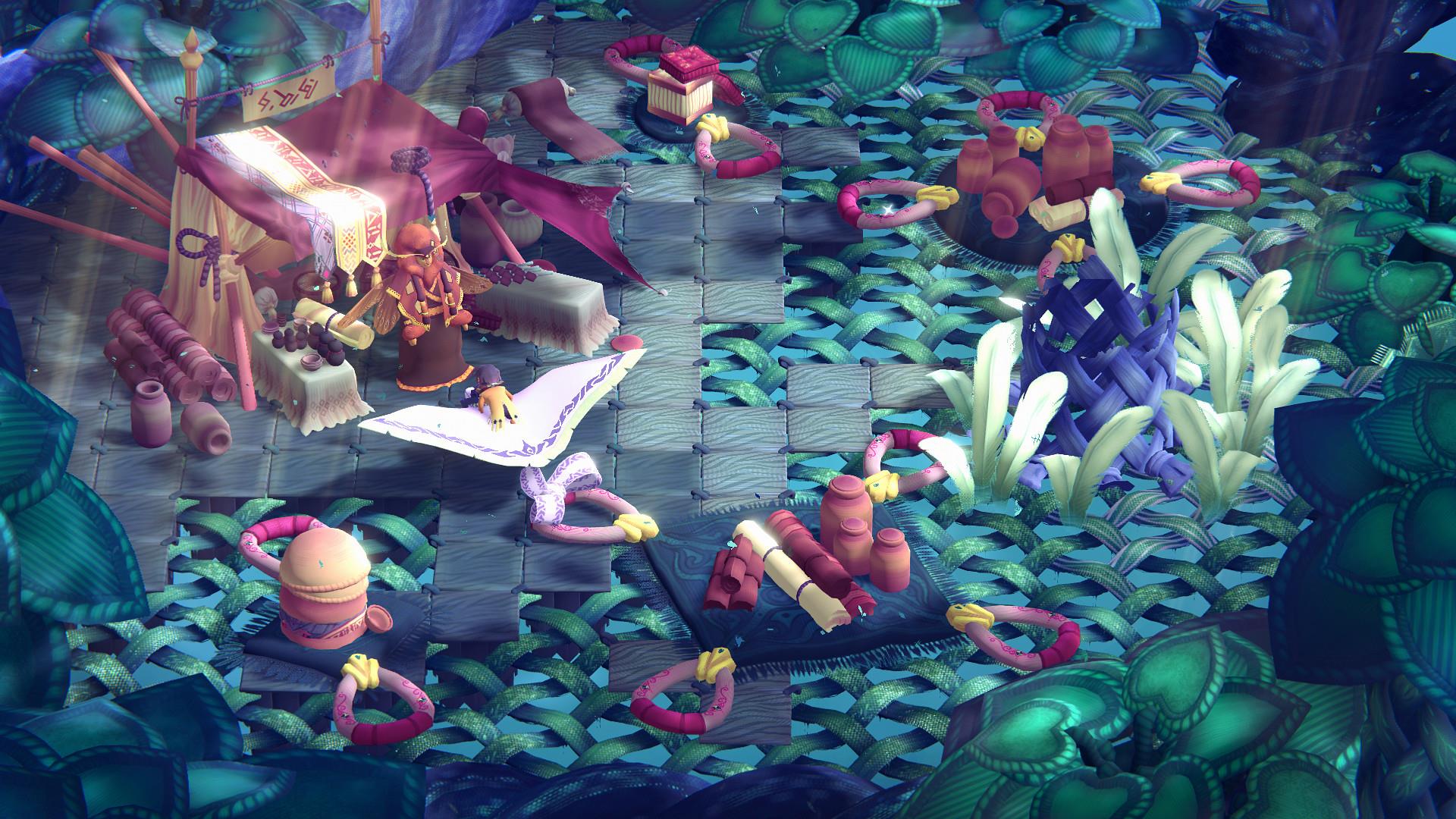 Thankfully combat is not a central focus of the game. The weavers you ride can dash through enemies, tie them up, or carry items to help defeat foes. Combat starts off simple, just like the puzzles, but as you advance further in, creatures you come into contact with can be downright frustrating. Learning the patterns of movement helps, but that can take too many trial and error runs before you get fights down, which bogged down the game. I found my finger constantly using the dash button, and would go around any enemies that I could avoid.

Weaving Tides also has a terrible mini game. When Tass goes into town he can walk up to one of his Weavers and pet them. The game goes into a first-person look with Tass’s hand outstretched to pet or brush the Weaver. It doesn’t take much to learn how to play, but brings nothing to the game other than to kill a few minutes, but the first-person look is off putting when compared to the rest of the game. It does nothing for the story, looks odd, and didn’t hold my interest even the first time I tried it. It was easy to complete, didn’t take up much time, so there’s a plus for it. 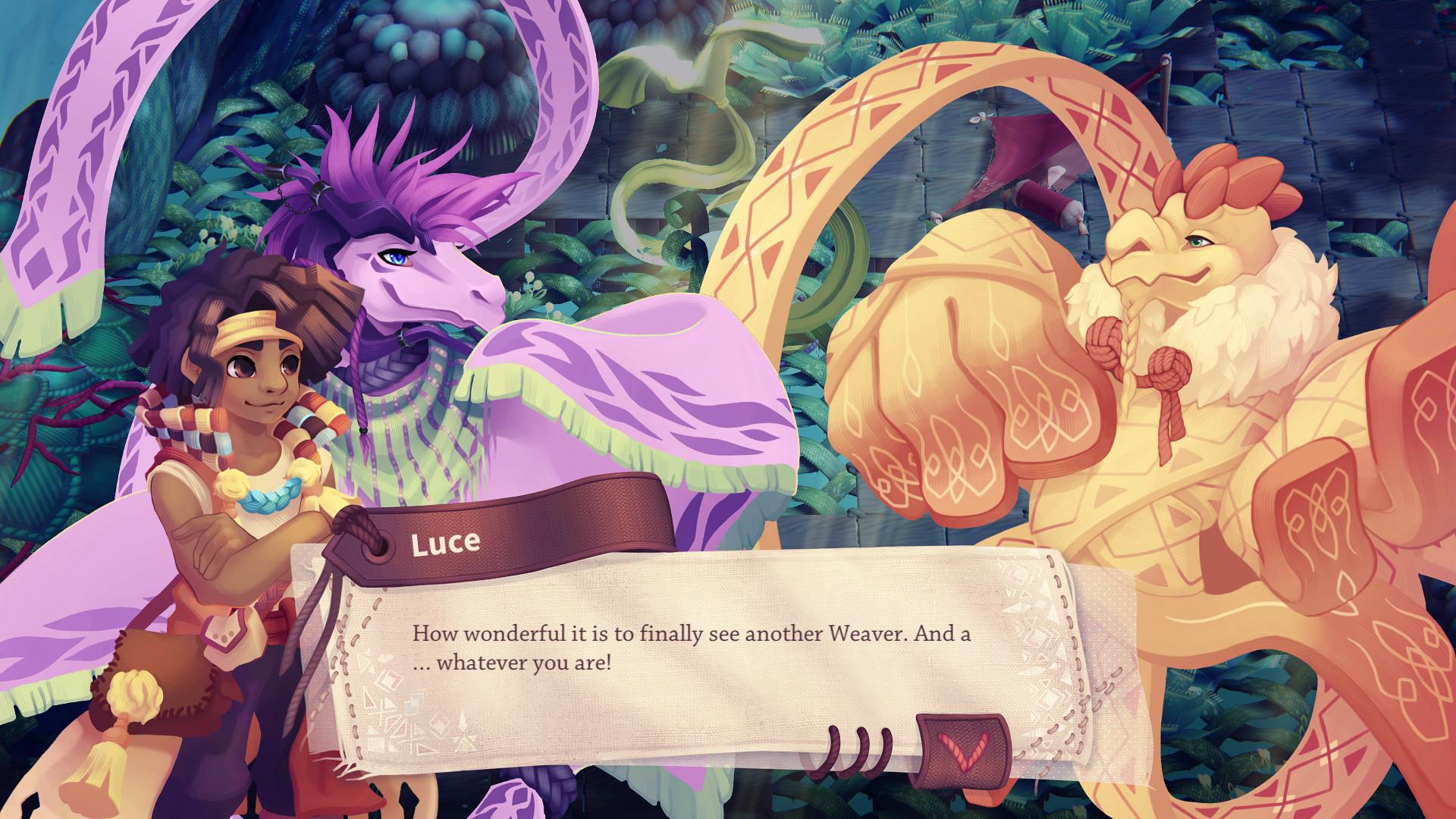 Weaving Tides doesn’t take any risks with storytelling or engaging combat mechanics, but that’s ok. Instead the game relies on a unique way to present puzzles, and it does that with a crisp shine.

Weaving Tides has a bright look, or dark when in some parts, and carries a relaxed feel to gameplay and puzzle solving. The generic story and annoying combat mechanics bring down an otherwise unique puzzle game. Developer Follow the Feathers has the hard part down of making games. Now if they can make combat and story a little more fluid with the next title they will have an indie darling on their hands.

Story is a little generic, and combat is mediocre and frustrating at times. But Weaving Tides is about puzzles, and they have it in spades. Most of the issues, like linear gameplay, can easily be overlooked when thinking about this relaxing puzzler.