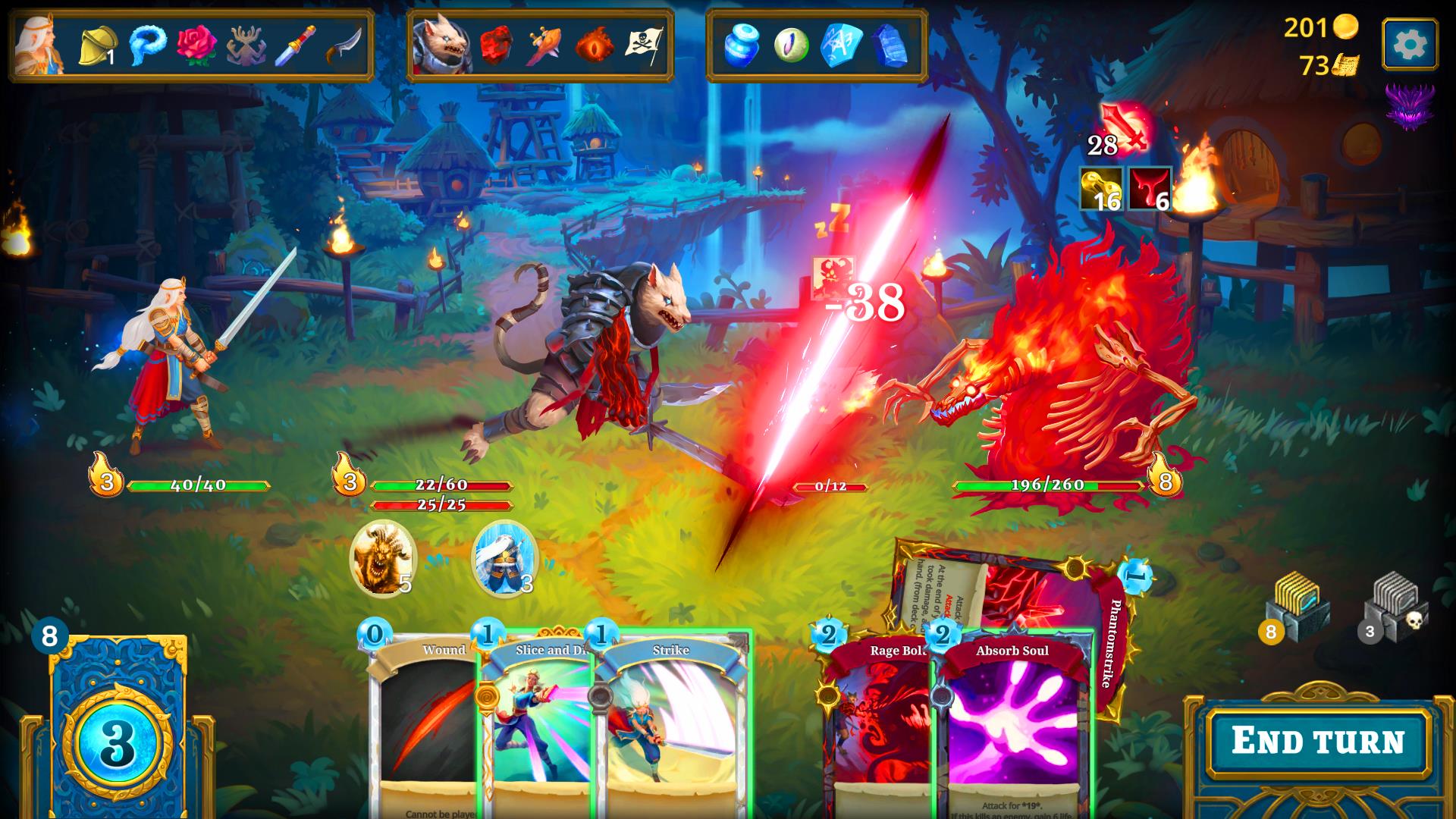 I'm not sure if we really even have a proper title for this genre of game. Roguelike deck builder I suppose comes closest. Whatever it is, I have been a huge fan ever since I went down the rabbit hole with the the seminal entrant into this style - Slay the Spire. There have certainly been other games that brushed Slay the Spire's mechanics and have offered experiences adjacent to it. SteamWorld Quest: Hand of Gilgamesh certainly rings the same tune but with more RPG elements than roguelike ones. I think with RogueBook we're finally starting to cross over squarely into the establishment of a proper genre of games, and it is one I couldn't be happier about.

The mechanics of this type are simple enough. The game plays out as a series of battles. Battles are won by depleting the hit points of the opponents (before they deplete yours). Attacks, defenses, and special actions are are performed from playing cards. Each round draws a set number of cards and has a set number of maximum points to play those cards. Once the deck is exhausted it reshuffles and draws through again. Minions give way to bosses as checkpoints to cross into greater levels. Loot is earned along the way in the forms of currencies, new cards, and even special items that can drastically alter gameplay. The key is to build a deck with solid synergies and manage your characters' health through the battles so that you not only defeat the opponent before you, but have enough left in the tank to tackle future challenges as well. It's a wonderful form of gaming that combines both near and long term planning between the deck building, simply surviving each challenge before while at the same time keeping an eye on the end game, and the roguelike elements of every run being every so slightly different between both the board draw and the rewards you earn along the way. 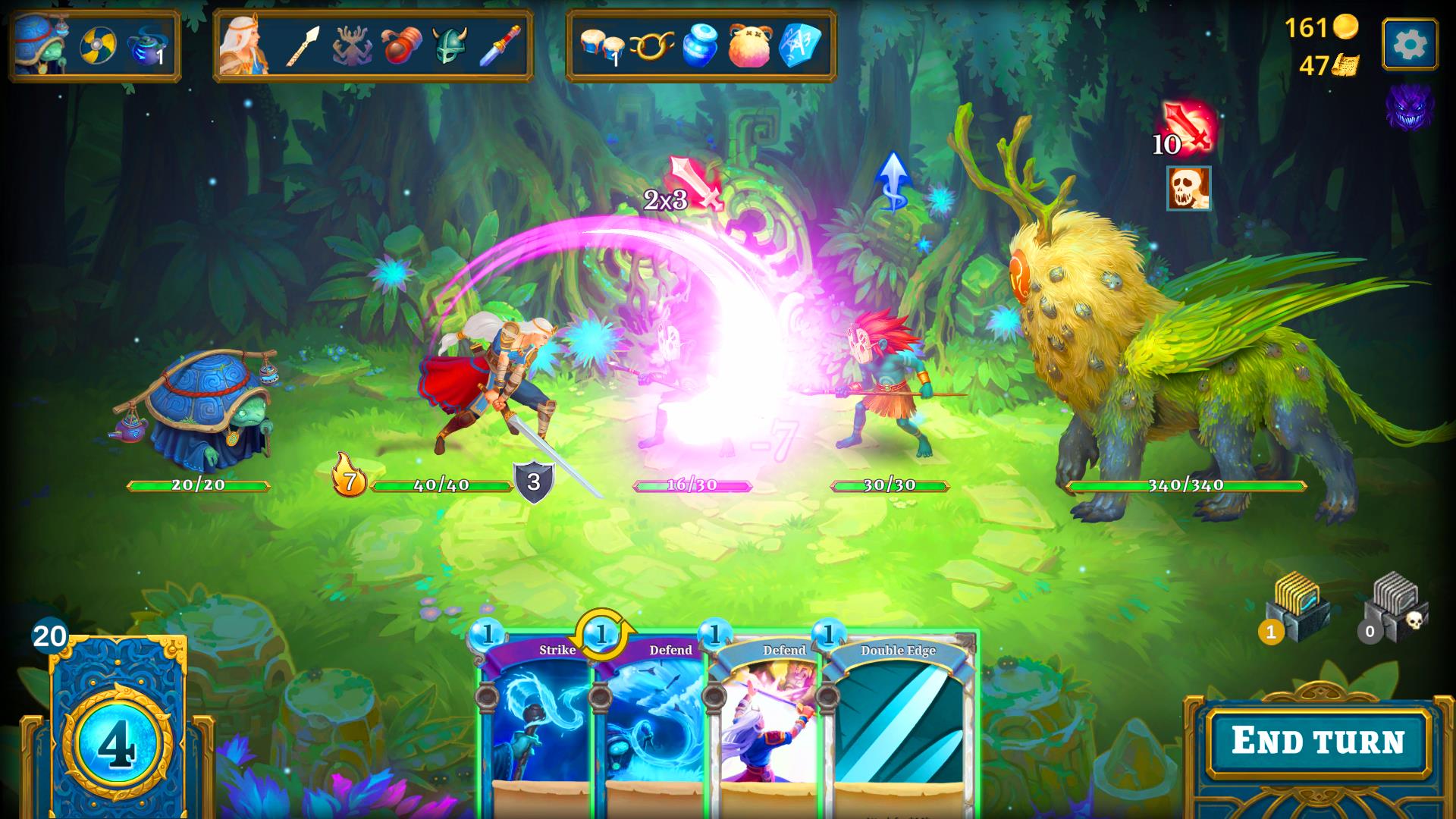 It's all wonderfully fun and RogueBook is absolutely no different, but has an Abrakam twist the developers are becoming known for. The first release Abrakam treated us to was Faeria, which was born as a Kickstarter in 2013 and eventually made Early Access three years later, with an official launch on 2017. Faeria has since been ported to several consoles and is a wonderful gem of a game. I reviewed in for Switch last year and despite it not living up to the standard set for PC I still landed on a score of 8.8. Faeria is a Collectible Card Game featuring a "living map" as its mark on the genre. In Faeria the cards were the characters you placed on the board, with RogueBook we instead wander into this roguelike deck builder space and the cards become the actions of your selected characters on a journey. This time around the twist is also map related, in that from the opening gate there is only a single solitary line of map revealed to the boss, but the map itself is much larger.

You are given only the spine of where this page opens on the "book" and must use the ink collected from winning the various battles to reveal more of the map. You don't create the map. It is randomly generated and populated (rogue-like) with enemy encounters, loot, currency, and other power-ups, but you are limited from reaching the farthest corners by the ink you must strategically place to traverse the page. You could rush straight to the level boss, and inevitably fail underpowered as you surely will be, or you can maximize your ink resources to try and power up as strong as possible before taking on the final test. The choice is up to you. On certain runs, you might spend all your ink on a level when the rewards have been mixed or maybe un-synergetic. On other runs, you may be off to a solid start and want to save a few inkwells in reserve for the next level when the rewards, and challenges, amp up. Uncovering the board becomes a unique strategy in and of itself, and it is remarkably well done. 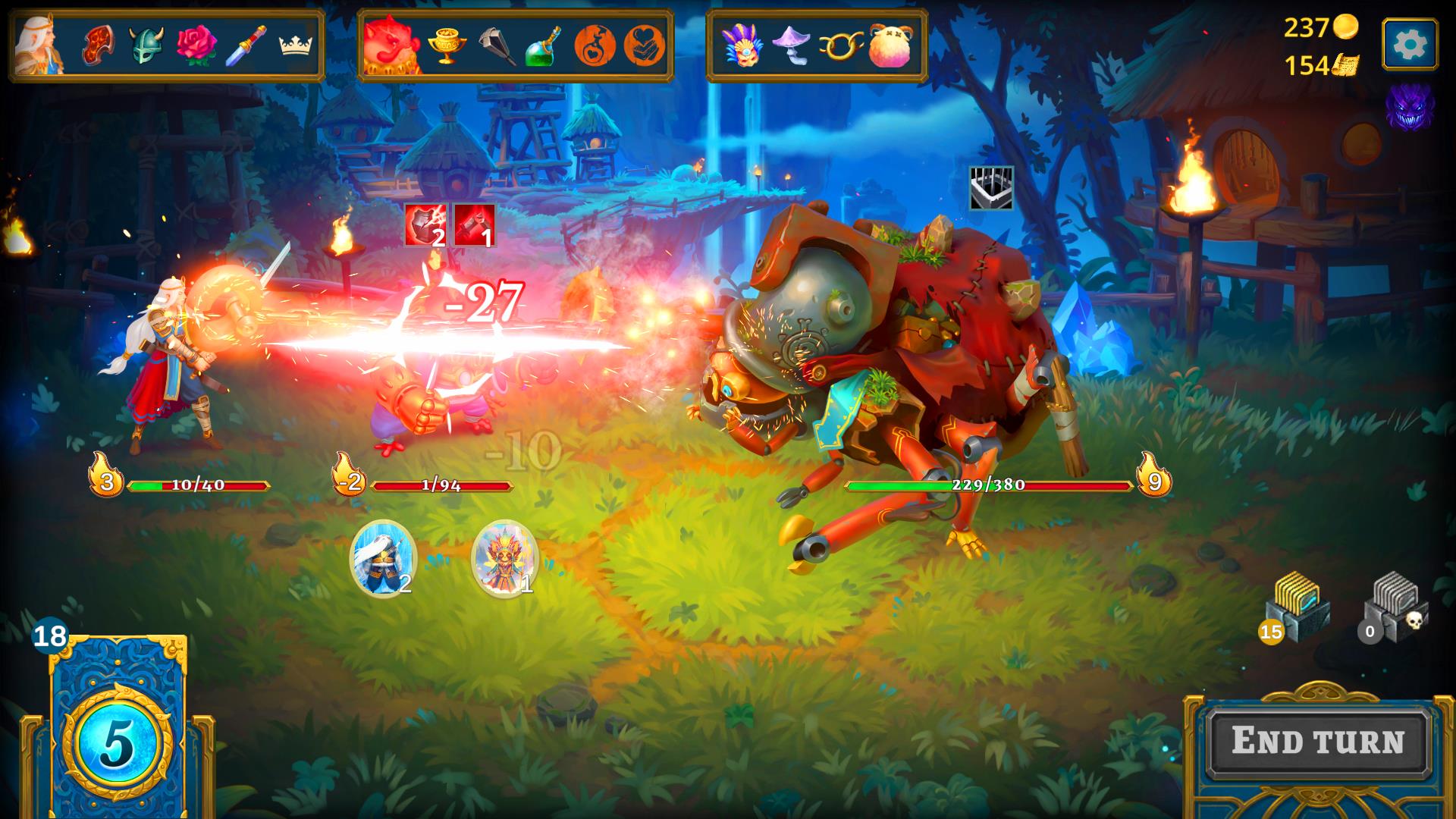 The next key in the RogueBook flavor comes in the sheer breadth and width of power ups. In Slay the Spire, power ups were insanely useful, but I still found the deck to be primary to success (especially with respects to the mechanics in that game involving actually removing weaker cards entirely as the run progressed). I would say in both there is certainly largely a balance, but in RogueBook those scales are every so slightly tipped in the other direction, where power-ups edge out the importance of the deck; and this power ups come not only as general rewards from battle, but also rewards specific to your characters from leveling up and increasing the deck size itself. Also there are not only deck synergies in play, and not only deck/power-up synergies, but also character synergies as well. Unlike Slay the Spire, where you choose your character and face the Spire alone; you are teamed as a duo in RogueBook, picking two from a cast of four unique character options. And unlike SteamWorld Quest, you are also in control of which of these receive the enemy attacks by placing one in front and one behind, swapping freely based on card selection and timing. It's a minor mechanic but adds that little bit extra depth and planning to the process of each turn.

While the core gameplay loop of deck building and managing turns with respects to the action points available is constant with the other entires in this space, Roguebook does enjoy those little depth pieces that add a bit to the experience. The aforementioned character positioning being one, the post-run level up another. You are allotted a certain amount go XP for each run, depending on just how deep and successful the go was. That XP unlocks character and overall levels to both introduce new cards as well as power ups to the loot pool. Then there are "pages" you earn both as map drops and for winning battles. The pages can be strategically spent to further unlock both map events and increases chances in the loot pool. For example, drop orbs borrowed from Faeria lore on to the map that grant an extra action point to start each battle if you can use your ink to navigate a path to collect them. Or increase the chance of gem or card or power up rarity. Gems themselves are another mechanic that can add an extra effect to a chosen card - draw an extra card when played, increase the attack or defense of the card, or maybe make the card itself cost a point less. There is much less groundbreaking about the loop as there is about the little layers of depth added to the tested and true strategy paved by Slay the Spire, which this game is invariably a homage to. 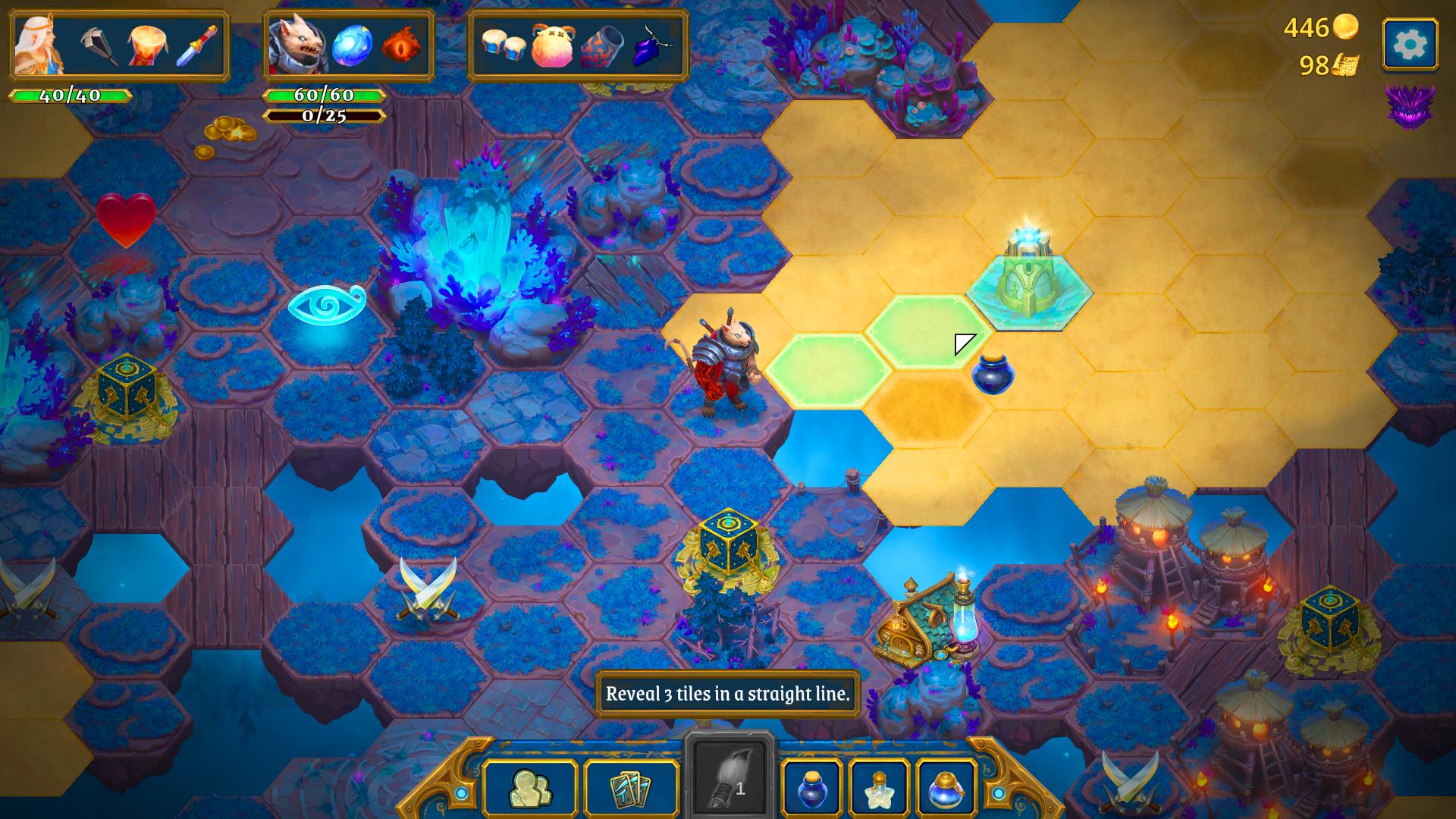 Add to all of that is the Faeria world and backstory that colors every scene. There is already an existing, rich world that RogueBook profits from by borrowing characters, style, and feel. In no way is familiarity with Faeria a pre-requisite to enjoy RogueBook, but playing the latter you get this sense that you are on a page in a wider narrative that has a richness that shines through. It's not all roses. The early review builds had some game-breaking bugs that would frequently crash my runs - all recoverable on re-load thankfully. I noticed none of that in the the full release build, but I have run into a few graphical issues where my character would completely white out - temporary and cosmetic, and they would be back to normal once that battle completed.

I've also noticed, when in direct comparison to Slay the Spire, there is a difficulty curve in RogueBook I feel is much more pronounced: it is simply too hard to recover from a few bad draws in building your deck and managing your hit points is overly critical for most characters because opportunities to heal yourself are much too few and far between. But for me, these are more flavors between two games that I think are both excellent, not necessarily worth ranking one above the other for. They each have a distinct taste and can both be enjoyed for the excellent, yet similar experience they offer. 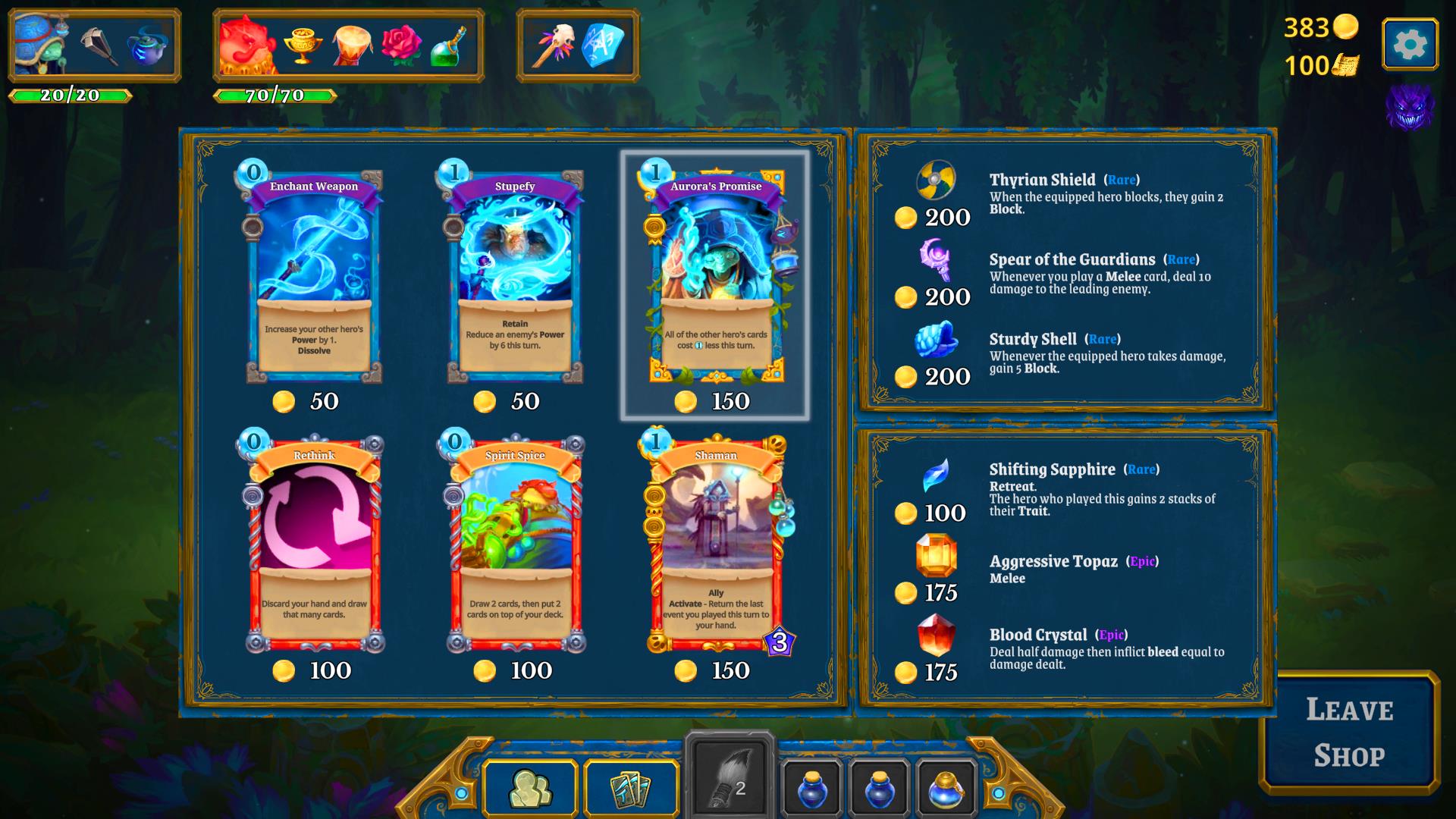 Making a comparison between the two comes naturally, Slay the Spire and RogueBook, but it's not derivative to do so. They are both truly excellent games that share the same space. You might prefer one over the other, but both deserve your attention, and if you like the one I can only imagine you would also enjoy the other. For me, I adore both. I think Abrakam have gone 2 for 2 out of the gate and will be happy to keep a close eye on the little Belgian studio in the future, as it seemingly moves from strength to strength.

I am going to give RogueBook a score of 9 out of 10. There are a few minor quibbles I do have with the lack of spaces to heal and the over-reliance around the RNG in the loot and card pool. The issue is simply that both are so large and chances to earn loot so much more limited than the breadth of options available, too many runs end with some of the best goodies never coming across the selections on the screen. By that same token the game makes for a much more varied experience run to run, but in a game that pits itself against an endgame and a final hurdle in the boss battles that you really have to strategize around from the first battle, this leaves too many runs doomed before they even begin. No worries though, I am happy to jump back in for another go at a simply wonderful game - an Excellent 9.0.

I am a sucker for this very type roguelike deck building game, and in RogueBook I have found a worthy successor to my favorite in the space, Slay the Spire. While I might think Slay the Spire has that edge on the given mechanics and strategies of a single run, I believe RogueBook excels at world building, game progression, and re-playablity as new power-ups, characters, cards, map items, and challenges are unlocked not just on every run but especially after successfully completing the core game. Each is excellent, each game deserves to be enjoyed. To prefer one over the other is to prefer chocolate syrup over caramel, but in both you are treated to a delicious dessert of fun and strategic gaming.