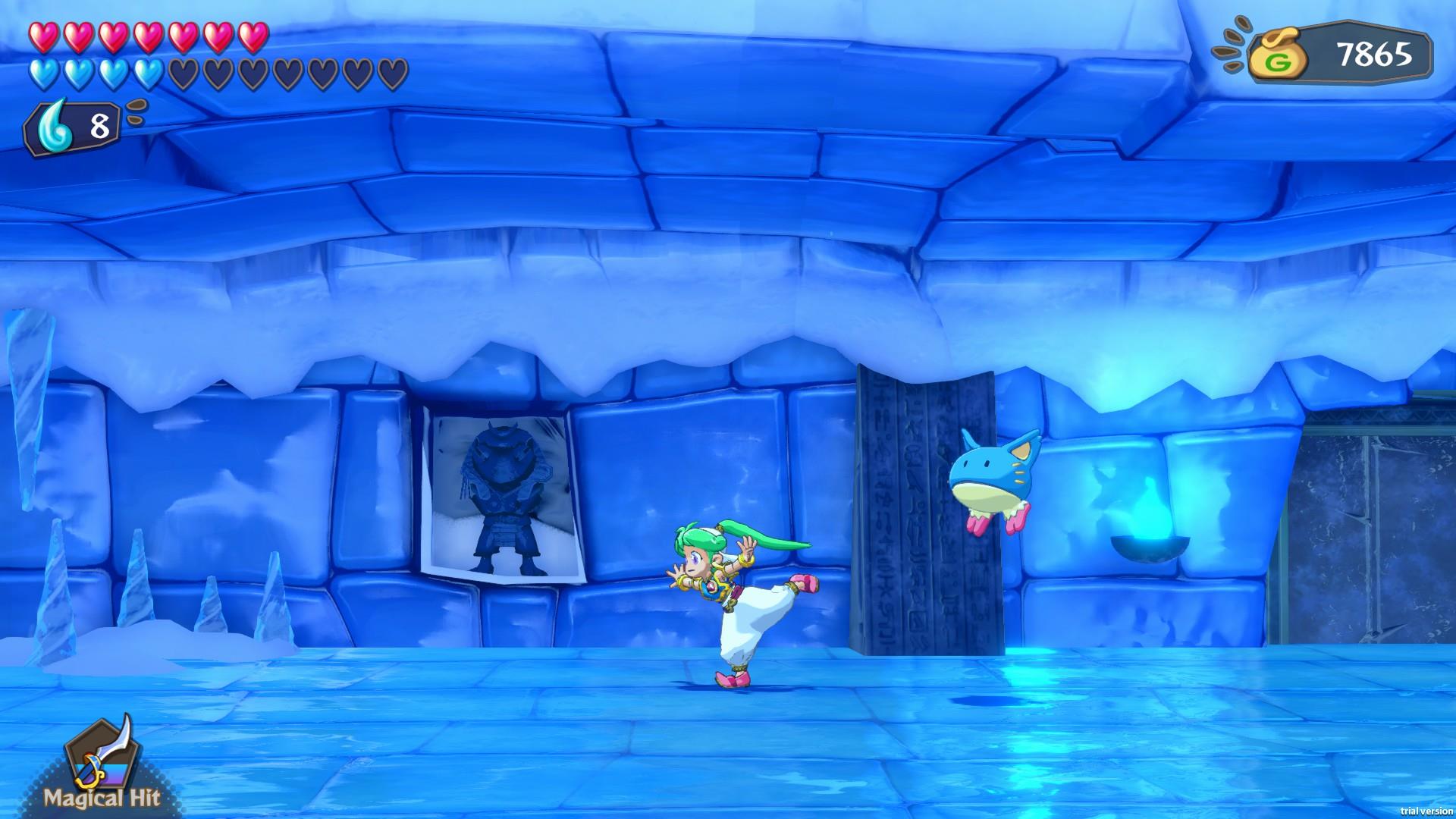 I often find it interesting to take on games that fall outside of my typical area of interest, reviewing them from an outsider’s perspective. What would a non-football fan like myself, for example, make of a Madden title? As someone not terribly interested in MOBAs, could I have a good time with SMITE? As a non-shooter guy, would I enjoy playing through the campaign of a Call of Duty game? (Spoiler: Yes, very much so.) 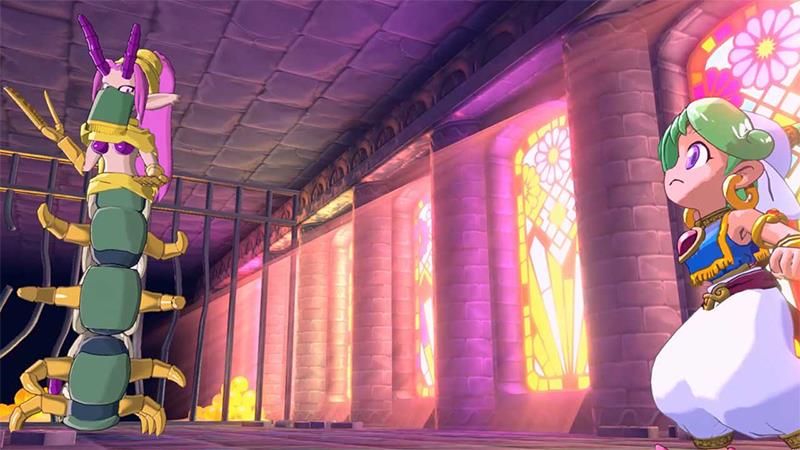 That mindset carries over to the way I approach reissues of older games. With the relative flood of recent remakes and remasters of classic games, I always like to consider what a remake would look like to someone completely unfamiliar with the original game. I’ve been playing games since Pong, so I’m pretty familiar with old-school game design, but would I enjoy sliding backwards in time if nostalgia for the actual title were taken off the table?

The recent remake of Wonder Boy: Asha in Monster World gave me an opportunity to find out. Originally released as Monster World IV for the Sega Master System only in Japan, it is fairly safe to assume that next to no one in the U.S. played Asha when it was first released. Playing a game that had to be imported on a relatively rare second-place system? Not terribly likely. Heck, I only saw a Master System in the wild one time; the things weren’t exactly growing on trees. 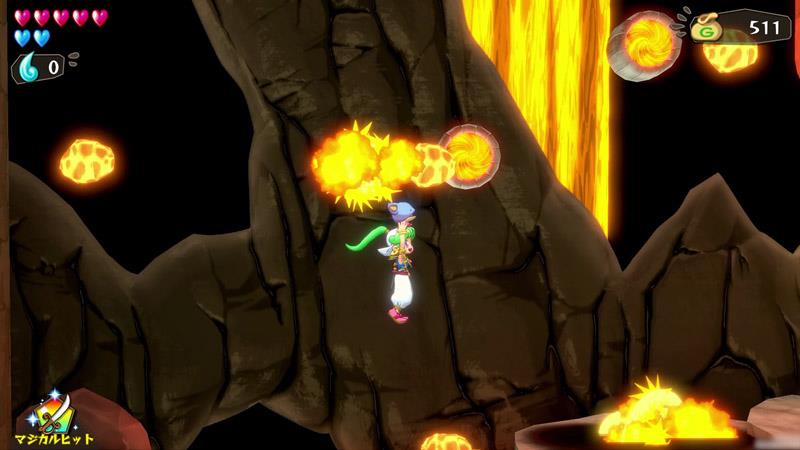 The Wonder Boy series has its fans, of course, but it never reached a fever pitch of popularity like some of its contemporaries. A few ports have shown up on western platforms over the years, but one has to wonder if Wonder Boy: Asha in Monster World has nearly enough cultural cache to justify a full-fledged remake.

But here we are, 27 years later, and a high definition, cell-shaded remake of a little-known game from 1994 has arrived. Since most people will be going into Wonder Boy: Asha in Monster World as cold as I am, I didn’t feel too much of a need to familiarize myself with the series. I just downloaded the game and pressed Start.

I was initially happily surprised. The animation in Asha is quite beautiful, with large, colorful characters moving through an attractive cartoonish world. Asha herself is an appealing heroine, bouncy and fun. Watching her little “butt dance” when she opens treasure chests is consistently endearing. 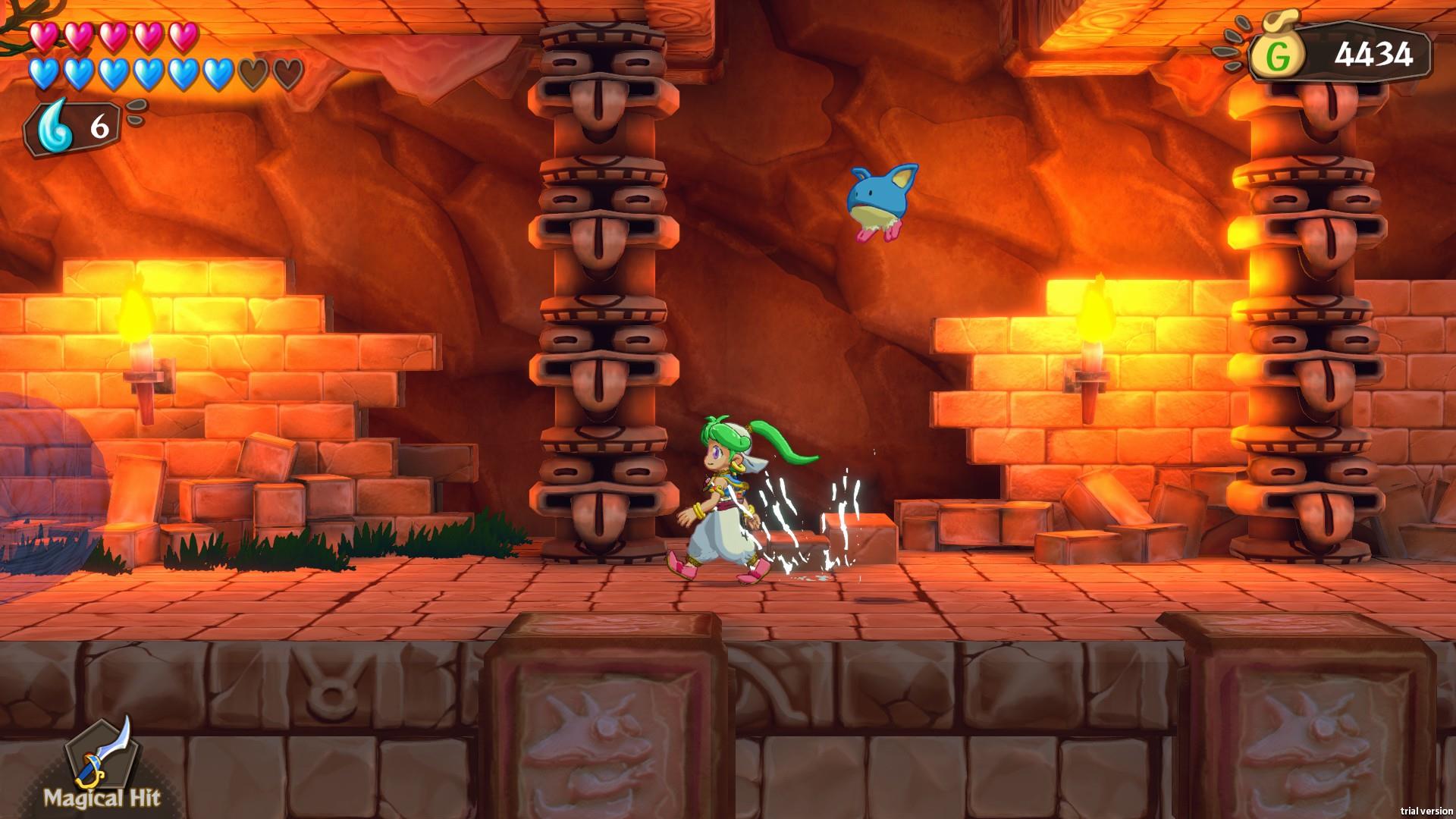 Asha is on the verge of adulthood, and as a rite of passage, she is required to scale a nearby tower. This gives players the opportunity to become accustomed to the character’s initial move set. Asha has a sword and shield, which can be used situationally by pressing a button for the sword and holding down on the analog stick for the shield (there is also a bumper button for the shield, but I found it to be superfluous). She has a single jump, which can be converted to an upward or downward strike if you press the sword button and a direction in mid-air.

Asha also has a special attack that slowly powers up, which I tended to forget about until a more difficult foe or a boss was whooping on me. Then it would suddenly spring to mind that I had a magic attack, which could help enormously. Asha can also increase her health by collecting drops scattered liberally around the environment, and enemies often drop hearts that she can use to restore any health she has lost.

The trip through the tower is simple and fun, with a bit of exploration and puzzle-solving, but nothing overly taxing. But then I hit the first boss and was reminded that I was playing an old-school game. This boss, a lady centipede-thing, probably killed me 10 times before I figured out the attack timing needed to defeat it. I wasn’t close to quitting from frustration, but a few curse words may have escaped my lips. 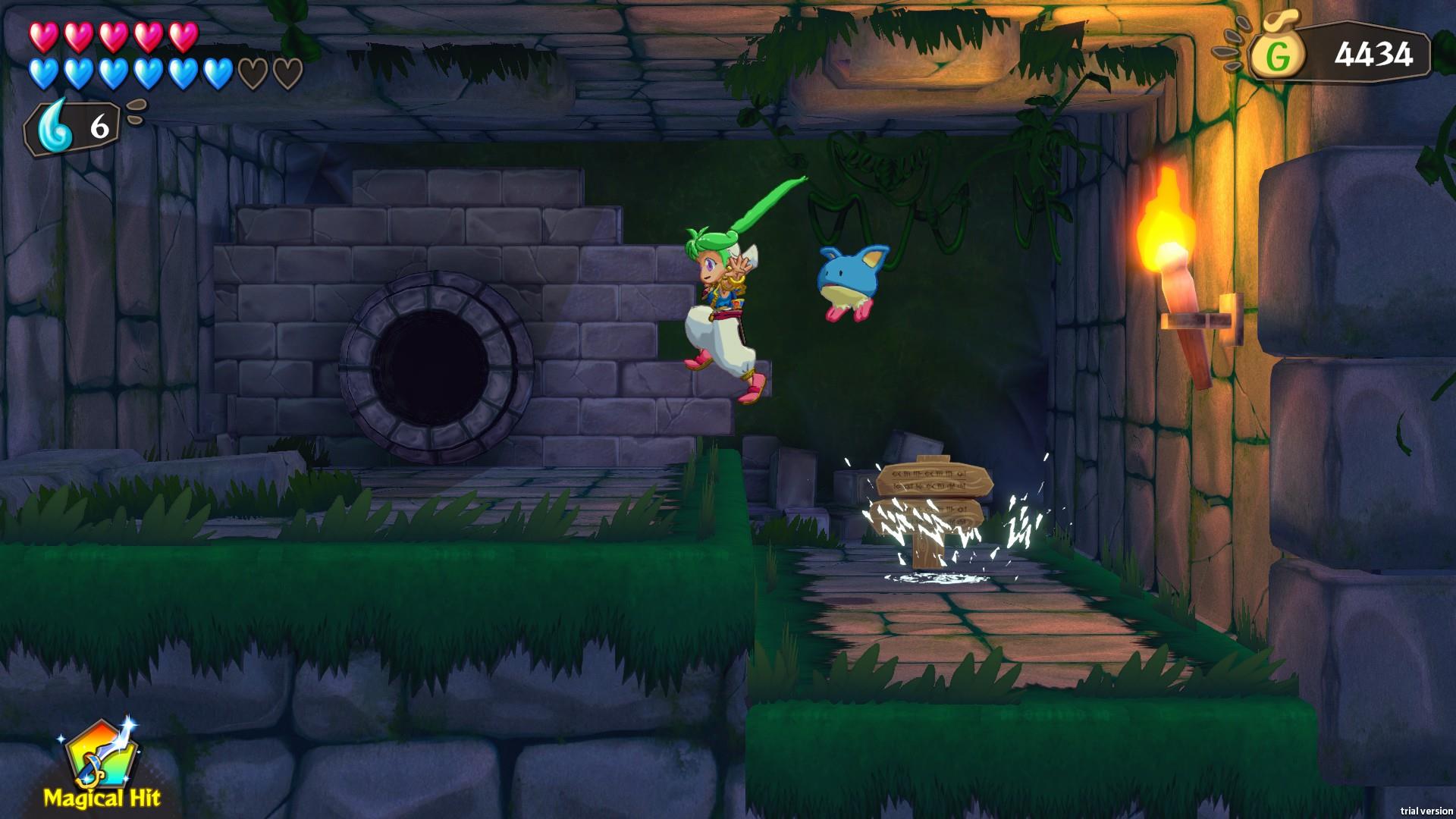 It was this fight that made me realize that I needed to save my game much more often. Being a classic title, there is no autosave in Asha in Monster World. Players can save as often as they like, but they actually have to remember to do it. Luckily, I had coincidentally saved my game just before the boss fight, so I was able to reload until I beat it. Reloading the game, by the way, is quick and painless.

After that fight, the real Monster Boy: Asha in Monster World begins. Asha receives her pet “Pepelogoo,” a little bat-like creature who accompanies her for the rest of the five- or six-hour game. This guy grants Asha the ability to double jump, and can be hurled across the screen to trigger switches. The double jump is a tad convoluted, with Asha needing to grab the Pepelogoo before jumping, which is a bit trying when you are used to simply tapping a jump button twice. Nonetheless, the Pepelogoo is a charming addition to the game, giving Asha a bit of company on her mission through a bunch of old-school levels. 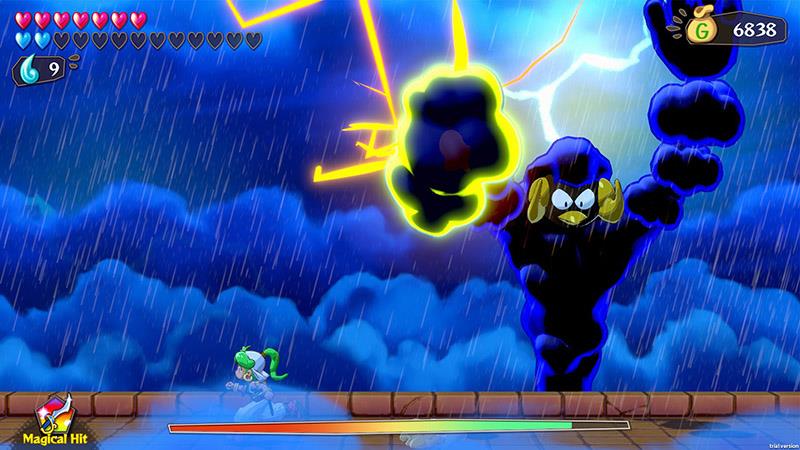 Asha plays all the hits, going to a lava level, an ice-cave level, etc. As the game wears on, the lack of modern conveniences becomes more trying. Many of these levels contain some amount of verticality, and it’s easy to end up running in circles. A map would have been a very welcome addition, but no-map-then equals no-map-now. The boss fights, as I’ve mentioned, can be blisteringly difficult; they are more difficulty mountains than difficulty spikes. And of course, that lack of autosave rears its head again and again as modern gamers forget to stop and save and lose a frustrating amount of progress when they are unceremoniously slaughtered by a new enemy.

But despite the inconvenience caused by these older mechanics, Asha in Monster World maintains an attractive, innocent charm throughout, confirming the reason for the franchise’s small but deeply dedicated fanbase. My eight-year-old daughter became infatuated with the game, despite my warnings that it was likely too difficult for her. She managed to gut it out through three bosses before finally calling it quits—not because she wanted to, but because she fried her save by saving right before a boss with one heart worth of health. 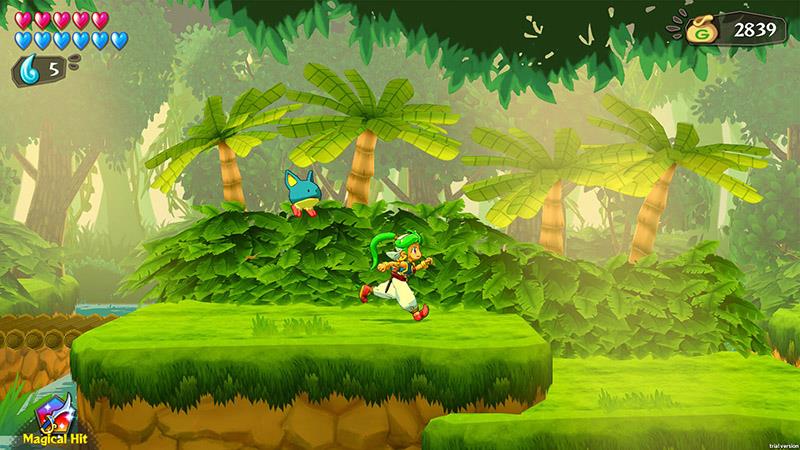 And that’s the thing about Asha in Monster World, it is absolutely unforgiving in that old-school way. The new coat of paint makes Asha look like a duck, and it walks like a duck, but this game is totally a velociraptor. It will stand there all still-like until you are convinced you are safe and secure, and then it will leap out of the bushes and gut you.

It turns out that the future has made us soft. Fans of O.G. console games will get a real kick out of Wonder Boy: Asha in Monster Land, as there is a lot here to love. But modern gamers should proceed with caution. Asha is cute and the game is fun, but if it catches you sleeping, it will all be over. Go into Asha in Monster Land with your eyes open, and keep them open the whole time, and you’ll have a good time with this semi-forgotten gem.

Attractive and charming animation makes Wonder Boy: Asha in Monster World appear to be a modern game, but don't be fooled. A lack of modern conveniences—autosave, a map, etc.—places Asha squarely in the old-school department. Blistering boss fights, meandering levels, and a very weird-feeling double jump all combine to make Asha in Monster World a fun game to visit, but only fans of the classic franchise will want to stay.