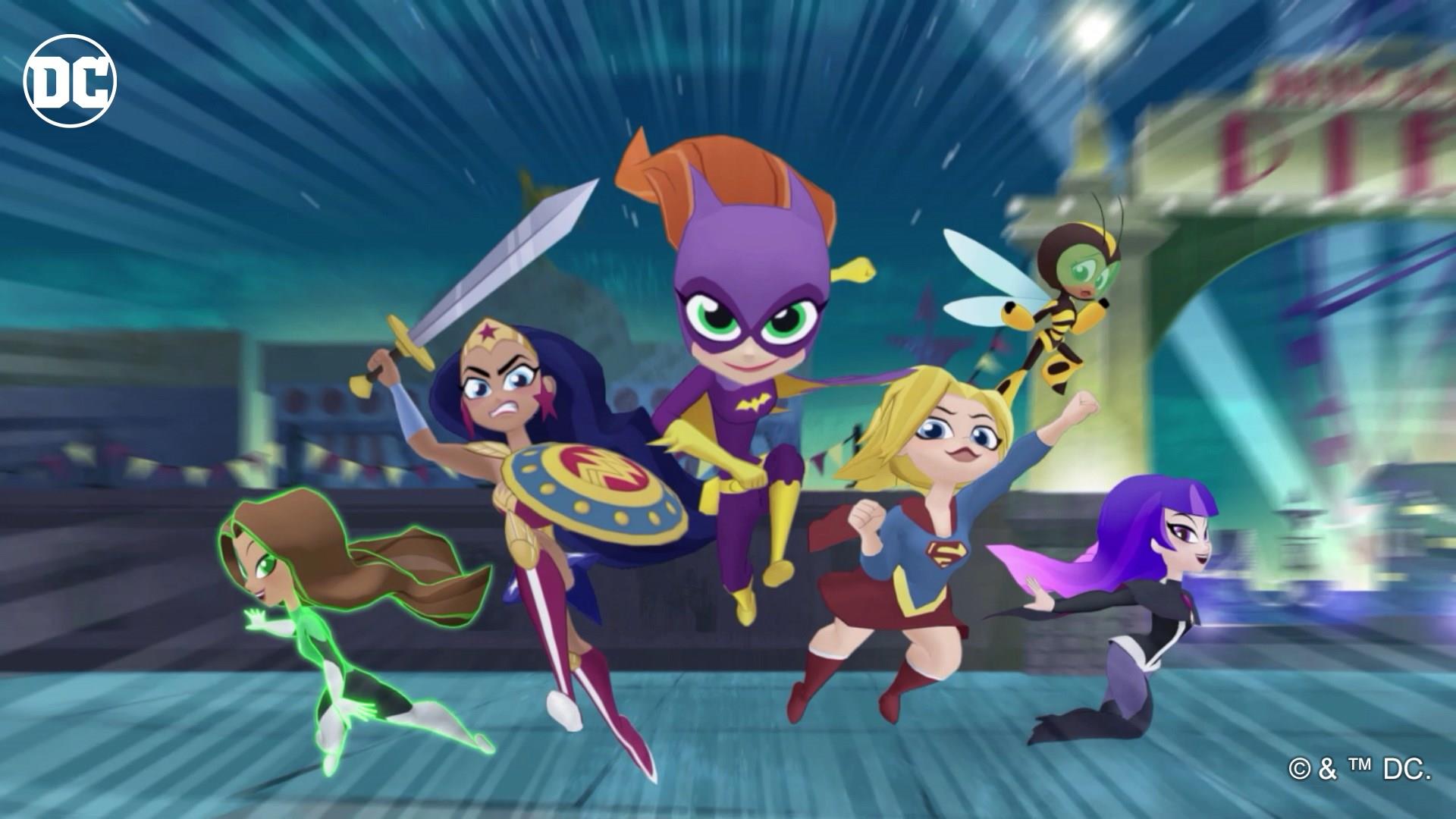 As an animated franchise, the DC Super Hero Girls show has been through a number of iterations. Starting with a few fun direct-to-DVD movies, the franchise then pivoted over to LEGO films, before undergoing a revamp to become the lively animated series it is today. Headed up by much of the same talent as the beloved My Little Pony series (and you can see that show’s DNA all over the animation), DC Superhero Girls is a gorgeously animated, wildly energetic take on the DC universe. 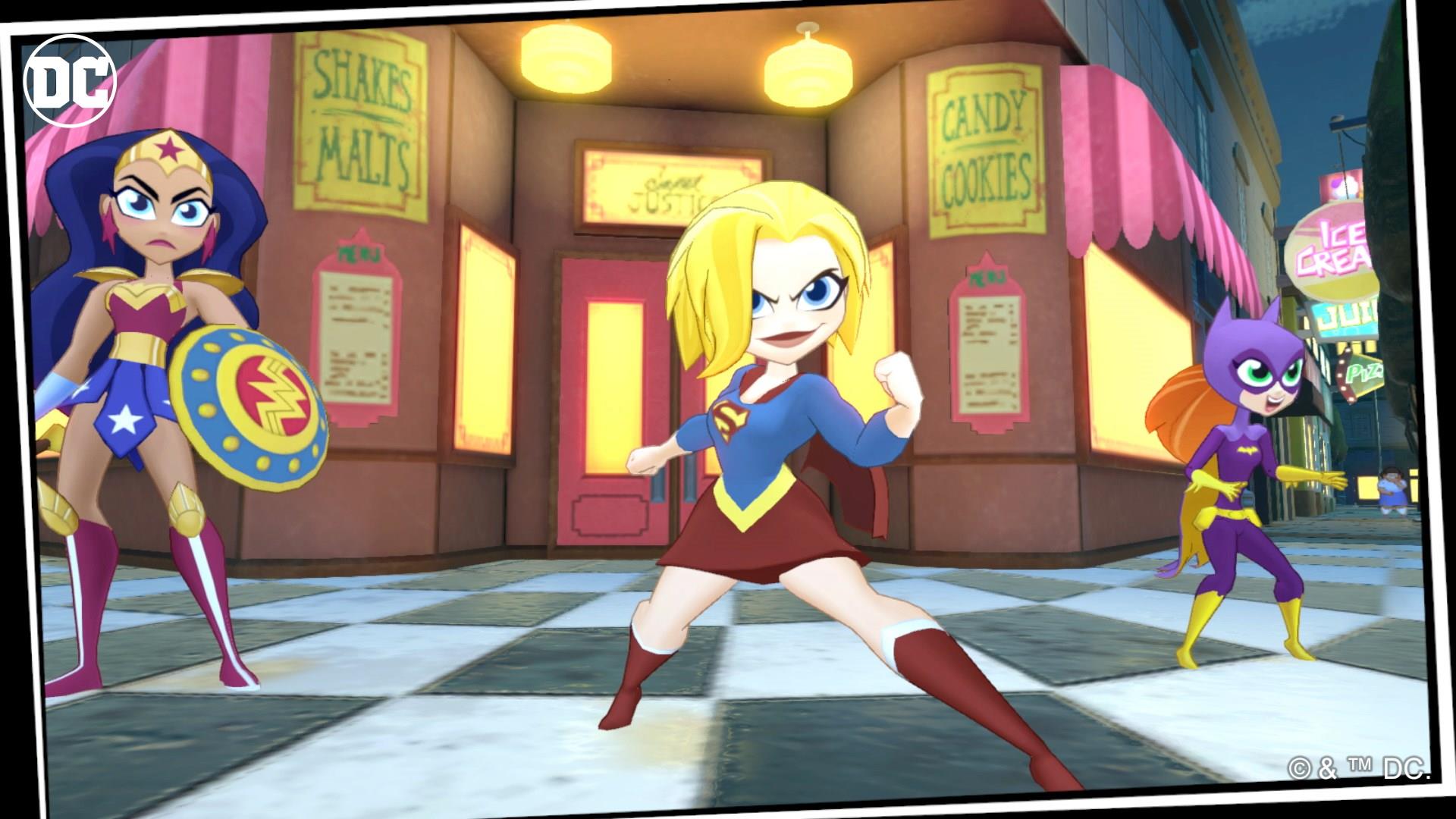 Ostensibly marketed to little girls, this female-focused romp through Metropolis and Gotham is plenty entertaining for all ages and genders. As a dad in his late 40s, I find my head swiveling toward the TV every time my kids go on one of their epic days-long binges. (Dad note: I don’t let them watch for days straight; but for days in a row whenever they watch TV they tend to focus on one show ad nauseum).

With a lot of the same anarchic energy that makes Teen Titans GO! such trippy fun, DC Super Hero Girls brings happiness and laughter to the sometimes overly dour DC Universe. As a casual fan of the show, I was very happy when Nintendo announced DC Super Hero Girls: Teen Power was coming to Switch as a first-party-published title. The fact that Nintendo was willing to put its stamp on this game meant that a lot of oomph would go into its development. Nintendo means quality, and it was my hope that DC Superhero Girls would be a game my whole family could enjoy. 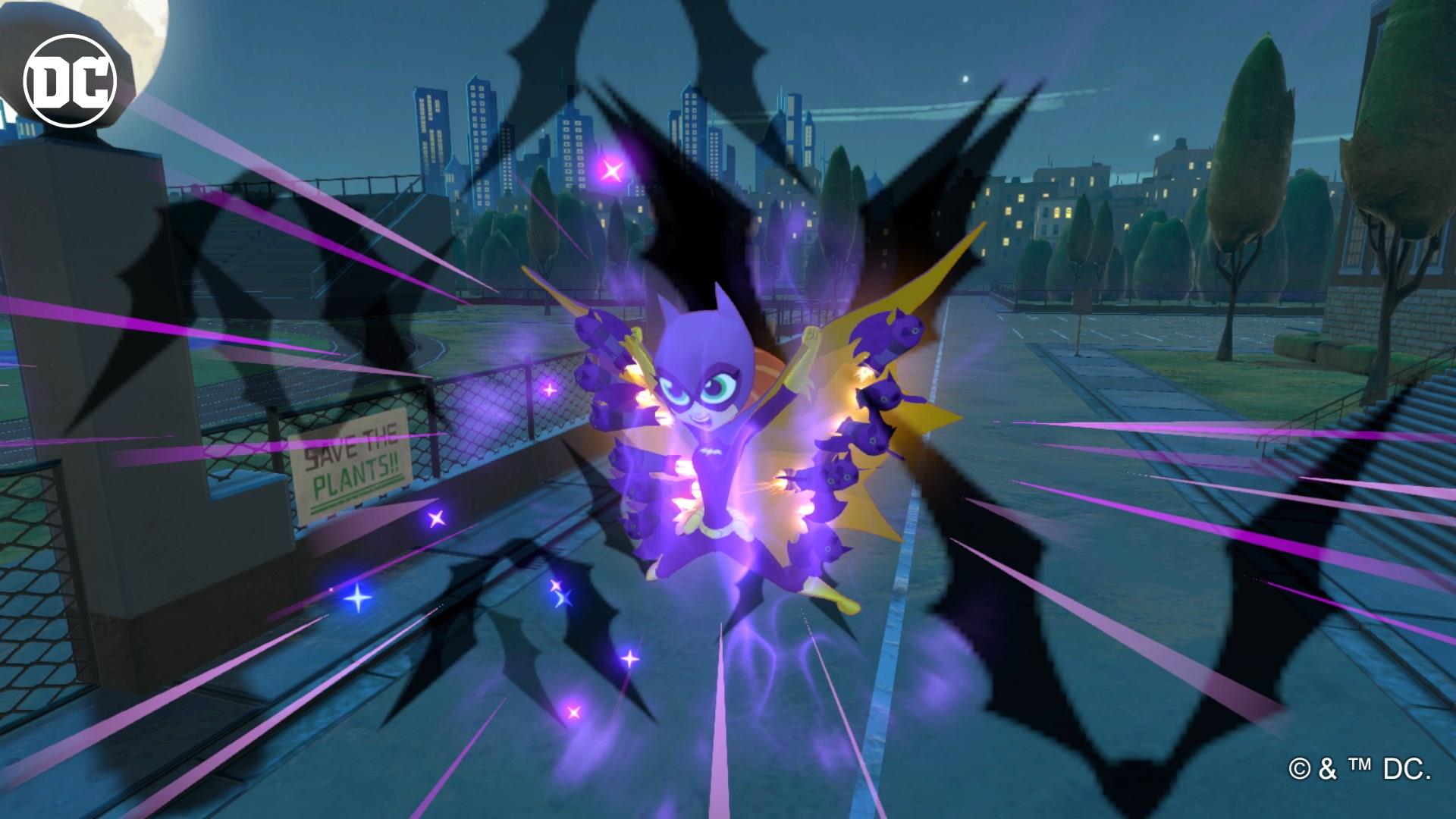 As it turns out, DC Super Hero Girls: Teen Power is just that. While the production values hover just under what I would consider AAA status, this game is still leaps and bounds better than one might expect it to be for a licensed video game adaptation. While the wild randomness of the show has been toned down a little bit to give the game a coherent through line, the characters, situations, and settings are all translated successfully from the source material, which gives Teen Power a lively sense of happiness. Just one look at the way Batgirl bounces up and down with joy at the end of each mission reveals the goofy fun at the heart of this game.

Focusing on Batgirl, Wonder Woman, and a rough-and-tumble Supergirl as its three main characters, Teen Power nonetheless incorporates the rest of the TV show’s regular cast, all fully voiced by the TV voice talent (and yes, Tara Strong is accounted for, doing double duty as Bat Girl and Harley). The three teenage heroes have a lot to do in this game, from managing their social lives via an in-game social media app, to helping rebuild an area of town that has been recently wrecked by a robot rampage with a basic urban planning mini-game. All of this is incorporated into the game’s go-where-you-want, do-what-you-want gameplay. 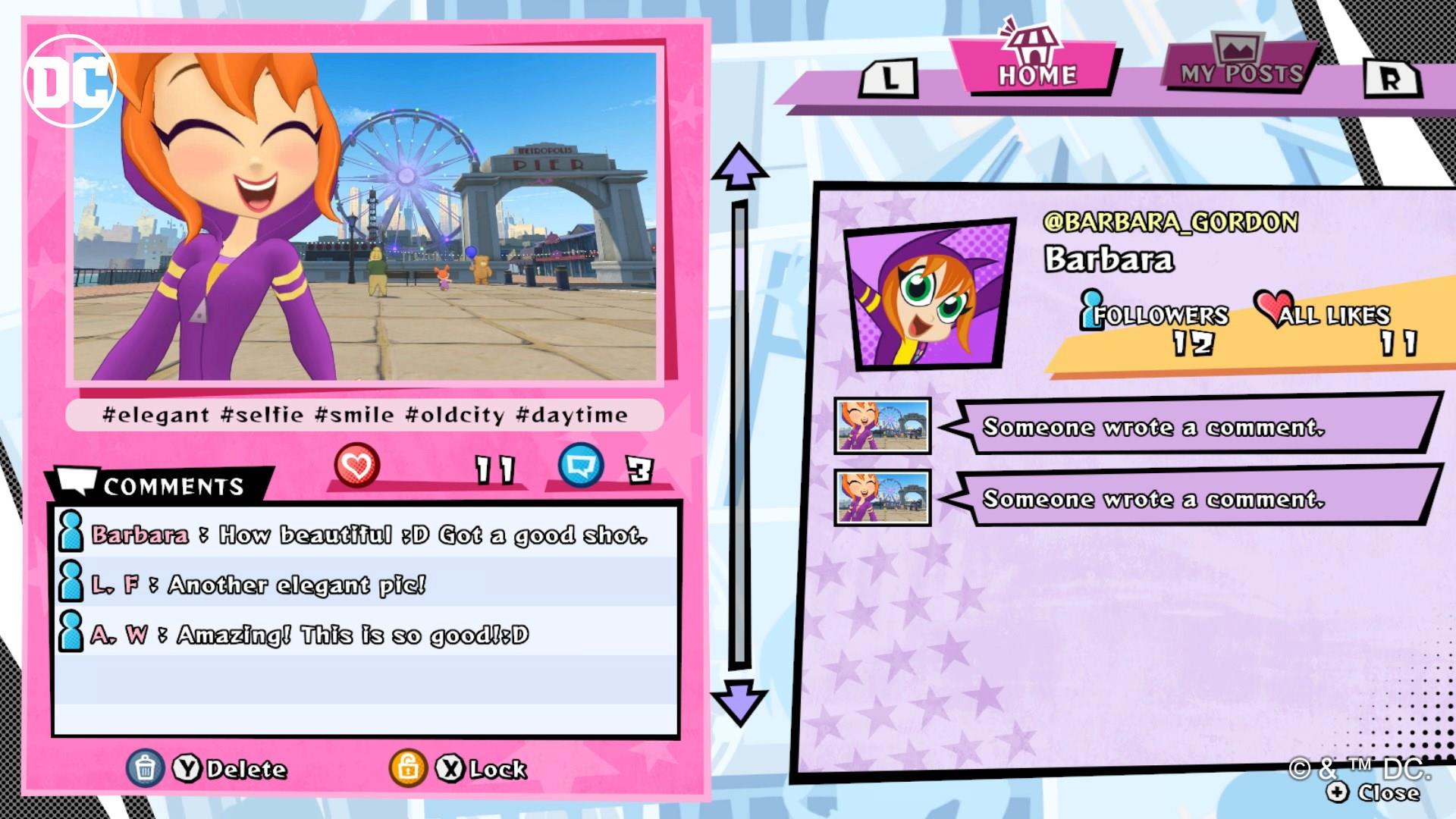 A basic storyline revolves around Lex Luthor’s efforts to revamp the above-mentioned trashed city. Were the robots that smashed stuff up really hacked, as Lex claimed, or did he unleash them so that he could profit from the clean-up efforts? What do you think? While the girls run around trying to raise money so they can rebuild the city, mysterious toys start showing up at random, causing fights and generally being a nuisance. Could they have been sent by the evil super villain Toymaster? What do you think?

The story is fun, but inconsequential. Most of the game is focused on the girls’ day-to-day lives, and the silly weirdness of them going to school and being close friends with super villains, with neither side suspecting the other’s identity. Barbara Gordan and Harleen Quinzel are the best of buds, which leads to some ironic hijinks when they are at odds. They discuss their problems at school, neither aware that they are arch enemies when they suit up at night. 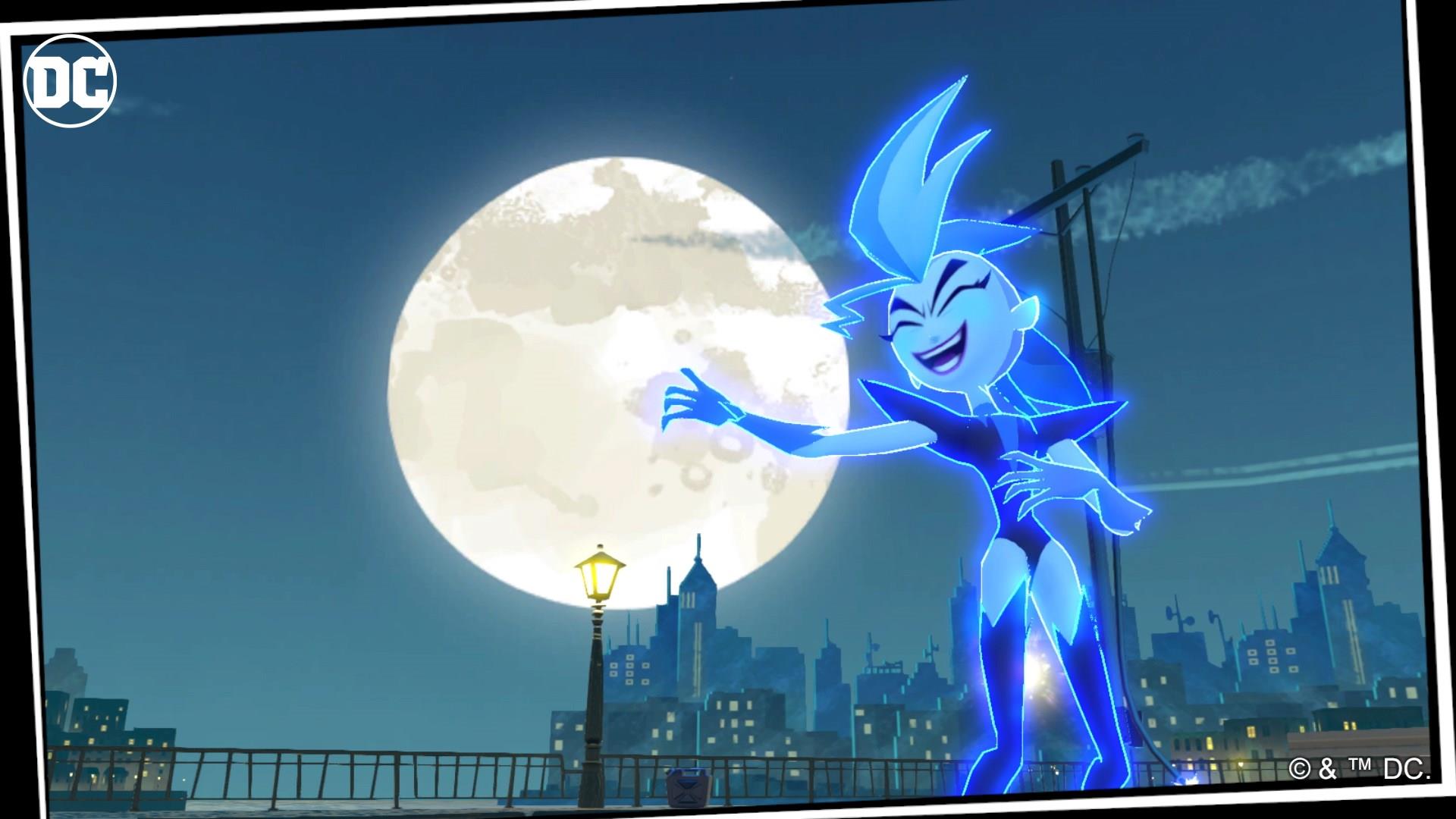 The girls run around the game’s three primary settings, usually in street clothes—though they do suit up for the game’s many combat missions. But combat, while very prevalent in the game, is not the only driving force. Many of the game’s missions involve stuff like finding a lost teddy bear for a little kid, or surveying people about what kinds of food they enjoy for a local chef. One lady wants you to take a photo of a “hot dude” she is infatuated with. Sure, there’s a ton of beat-‘em-up action stuff, but that’s not all there is. The Super Hero Girls don’t just wander from fight to fight. They stop for ice cream fairly frequently.

When they do fight, the brawling combat is reasonably well done. Each hero has a small skill tree to fill out, and though they are all reasonably powerful in their default status, they are much more fun to play when you unlock special attacks like Supergirl’s heat vision, or Wonder Woman’s magic lasso. Combat is basic, with the player pressing the Y button to attack and the B button to dodge. Stringing attacks together without getting hit unlocks some powerful combos, and special attacks can be unleashed occasionally when a meter fills up. There is nothing groundbreaking here, but beyond a somewhat twitchy camera, the fights are reasonably well done. 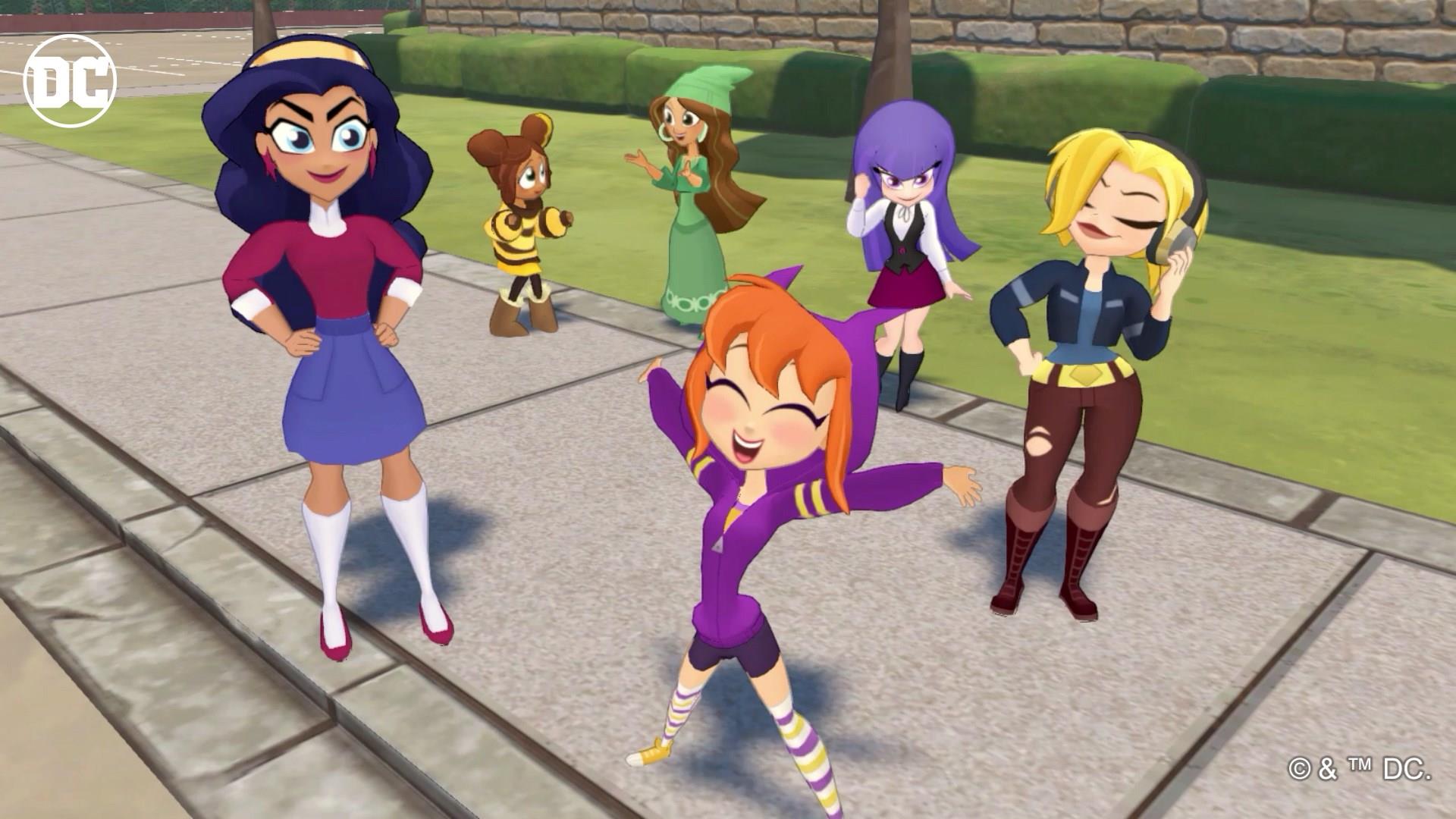 But for my kids, the fights are a means to an end. I was surprised with how invested they became with Teen Power’s many side activities. My daughter has been perfectly content to wander the city taking pictures (people pose when you aim a camera at them) and posting them on social media to pile up followers. The kids also enjoy blowing all of my hard-earned fake money on clothes for the Superhero Girls, outfitting everyone in pencil skirts and leather jackets. I have found myself seizing the controller so I can grind a few fights, earning more money to provide for my kids’ ridiculous in-game spending habits. Fatherhood. Sheesh.

Eventually, a trio of villains become playable, which starts the whole “we gotta buy them a lot of clothes” cycle all over again. The influx of the villains comes at just the right time to keep the game from feeling overly repetitive and stale, and of course it’s always fun to run around as Harley smashing stuff up. 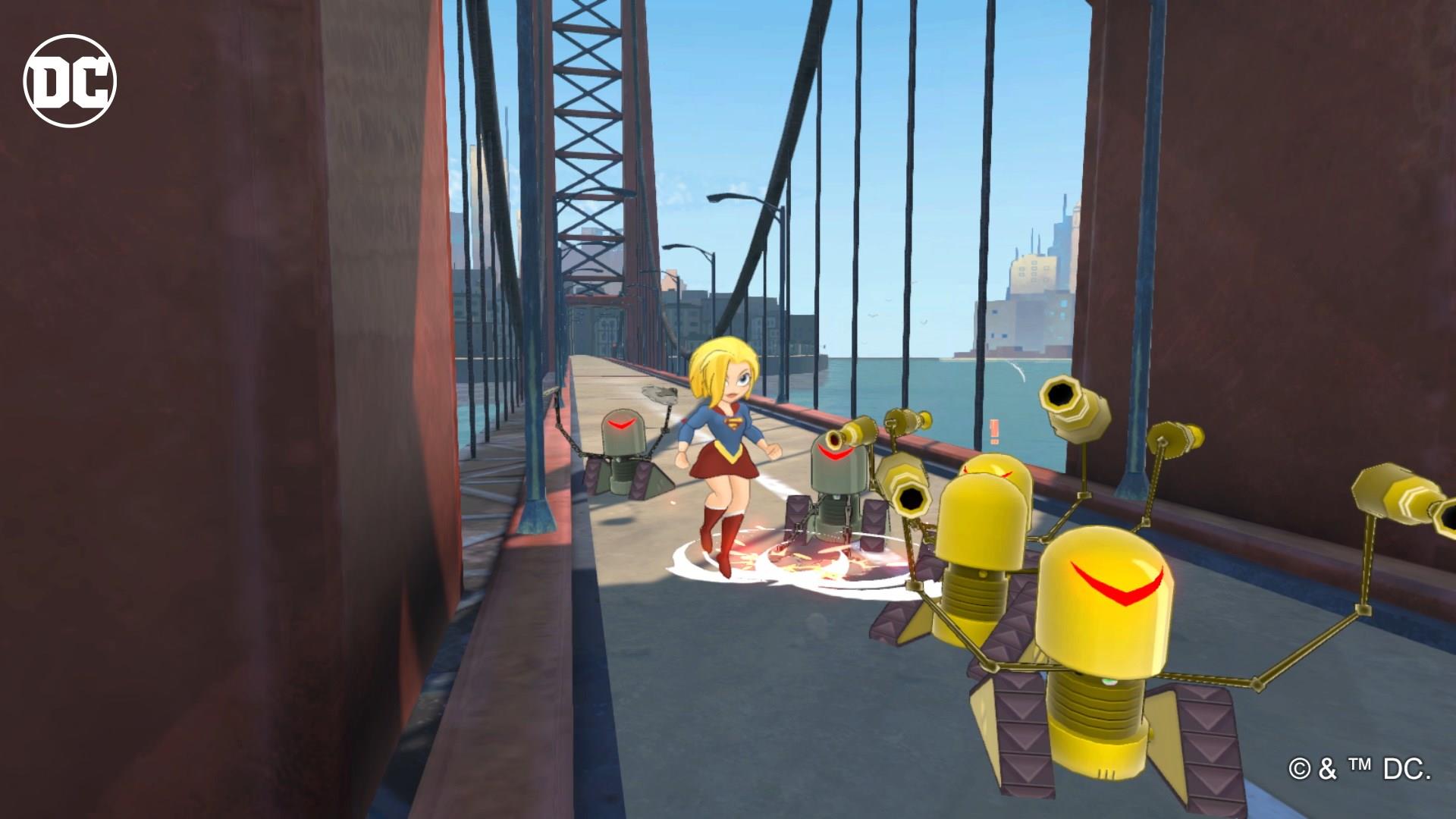 DC Super Hero Girls: Teen Power might not be in the upper echelon of video game greatness, but it is a ton of fun for kids. The game successfully translates a beloved franchise into an interactive medium, which—given all the failure in this arena—is quite an achievement. Sure, the game might feel a little like frosting on occasion, but there is enough cake in there to keep most kids’ media sweet tooths sated. And if the moms or dads want to grab the controller for some of the more difficult missions? Well, they will have fun too. Turns out, being a DC Super Hero girl can make you pretty happy.

DC Super Hero Girls: Teen Power successfully translates the beloved animated TV show into the video game space. While the game might feel a bit fluffy for adults, playing with kids is a blast. With reasonably well-done combat and a ton of side activities, Teen Power is a meatier (and more fun) experience than one might assume—an absolute win for a licensed game.