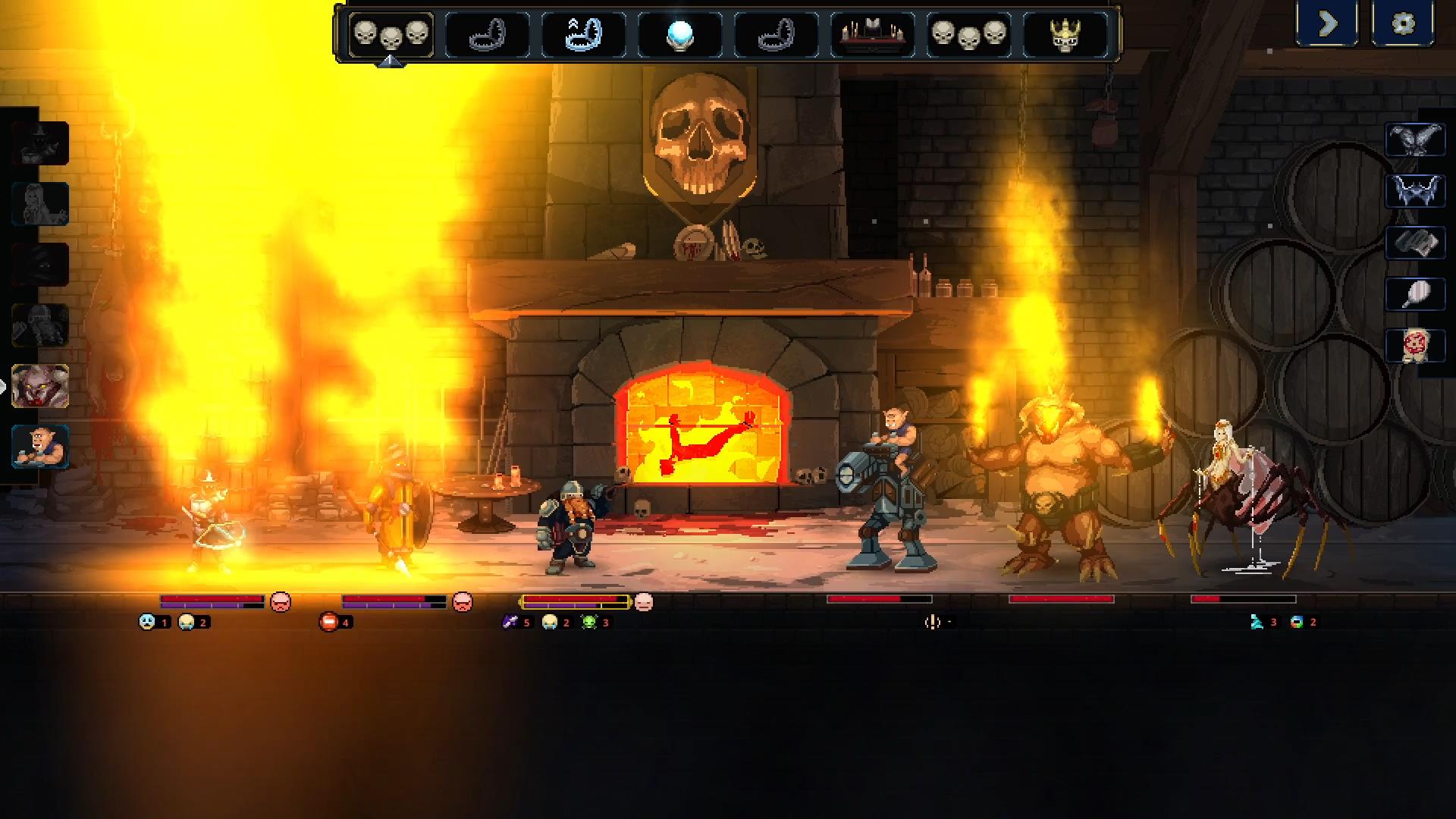 It’s always fun to step away from the shining heroic sunshine and slink off into the dark shadows of villainy. Instead of raiding dungeons, it’s a healthy change of perspective to sometimes try to protect deeply buried treasure rooms from gaudy, upstart heroes. And as a lowly dungeon keeper, it can be immensely satisfying to crush an over-powered team of heroes by hatching a dastardly plan and putting it into action.

Legend of Keepers puts players into the shoes of the monsters and demons in charge of defending a treasure, carrying on a video game role-reversal tradition that never gets old. Taking on the role of a boss/foreman, players must assemble a team of baddies, tending to their needs and mental health while preparing for wave after wave of do-gooders to come stomping into the place, demanding the bounty in the basement as though they had an actual right to it. 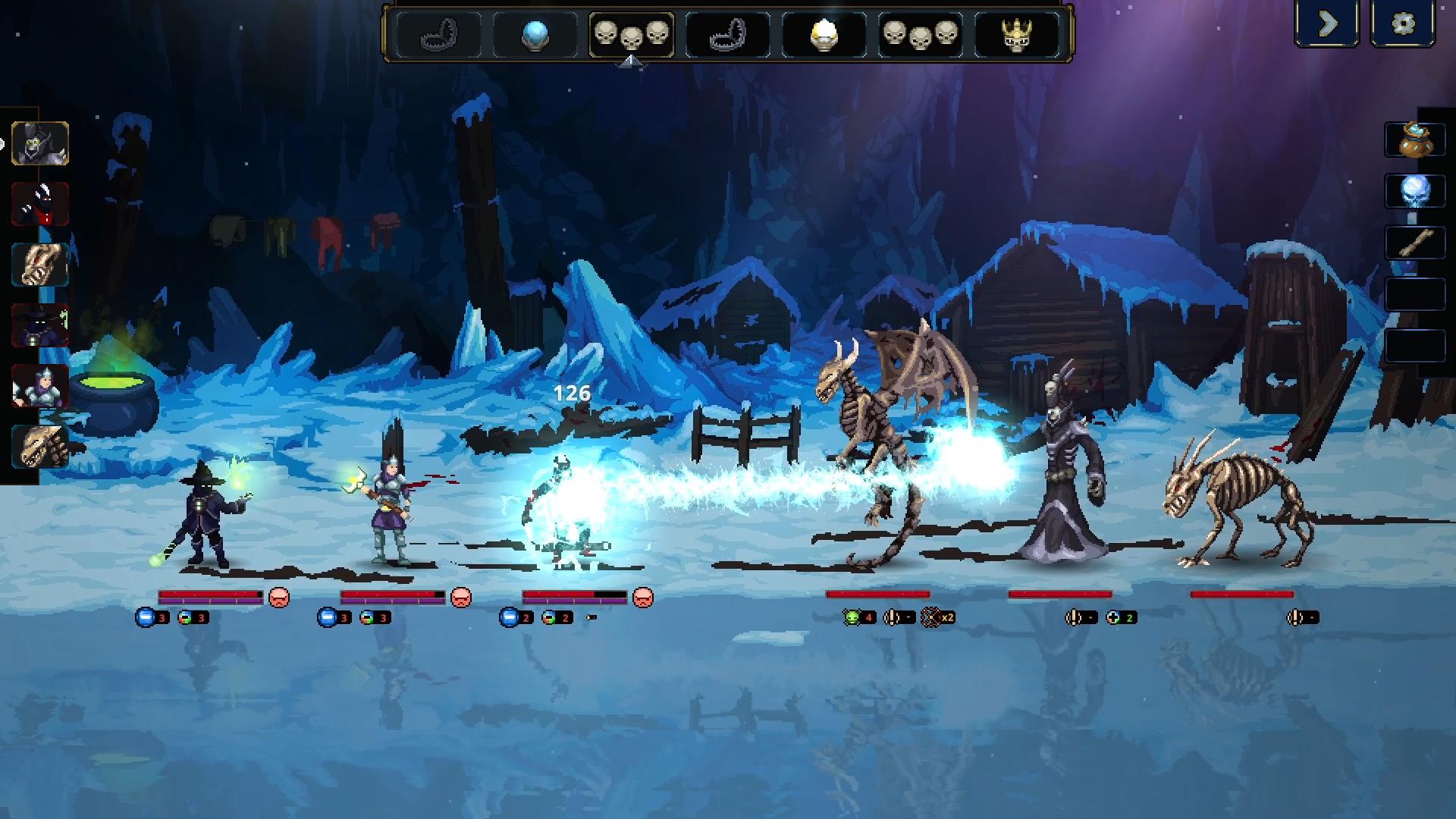 Though Legend of the Keepers’ tutorial is pretty sketchy, I was eventually able to piece together the flow of the game. Each “run” in Legend of Keepers has the boss character carrying over his stats from the last, but starting with a clean slate as far as staffing and equipment are concerned. With just a couple of monsters and a few basic traps, the boss must defend the treasure to earn a rather paltry wage, which can then be used to buy more monsters and traps, or level up the stuff he already has.

Runs consist of a set number or weeks, which can be thought of as turns. Most weeks are spent juggling a few randomly provided options, like taking your boss to work out and pick up a stat increase, or capturing an intruder in the castle and feeding him to your monsters for a nice confidence boost. All of this stuff in handled in menus, with a few nice paintings illustrating your choices. There is often the option to select an “event”, which can either result in a little bonus or end up with negative results. 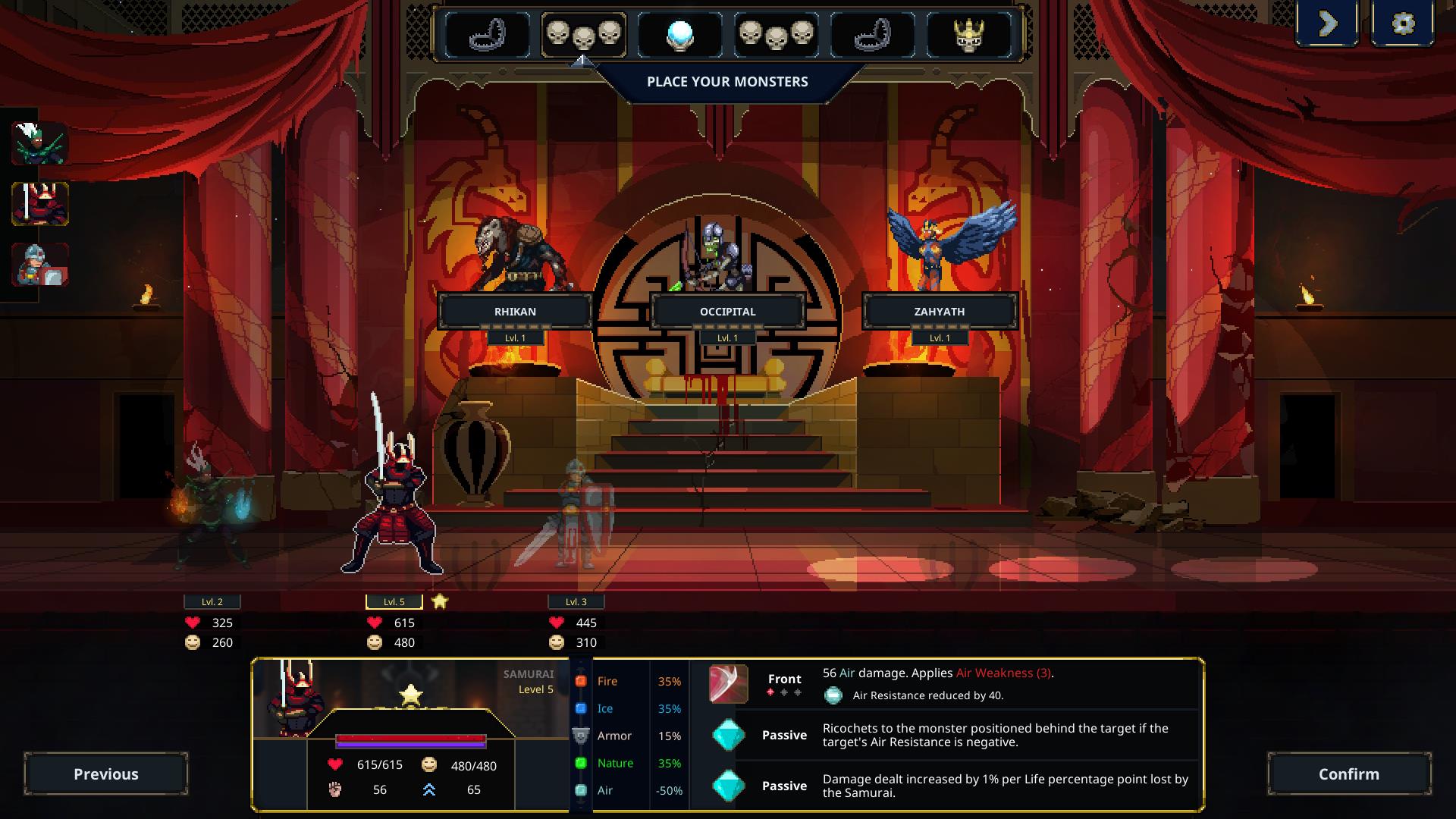 There doesn’t seem to be any rhyme or reason behind what offerings appear each week, and the randomization factor does make it a little difficult to construct a plan. Boss increases persist from run to run, but monsters start from scratch each time. If you really need to focus on leveling up a particular monster, you might end up getting the opportunity to buy traps instead, which can lead to the entire enterprise not moving in the harmonious direction you hope it will.

Once every six weeks or so, wretched heroes show up at the dungeon door. Players generally get to select from a few groups of invaders, each which offer various prizes that somewhat correspond with their stated difficulty. Defeat the easy guys and get a new trap. But take a chance on the group of veterans, and you could snag a powerful new monster as a reward. 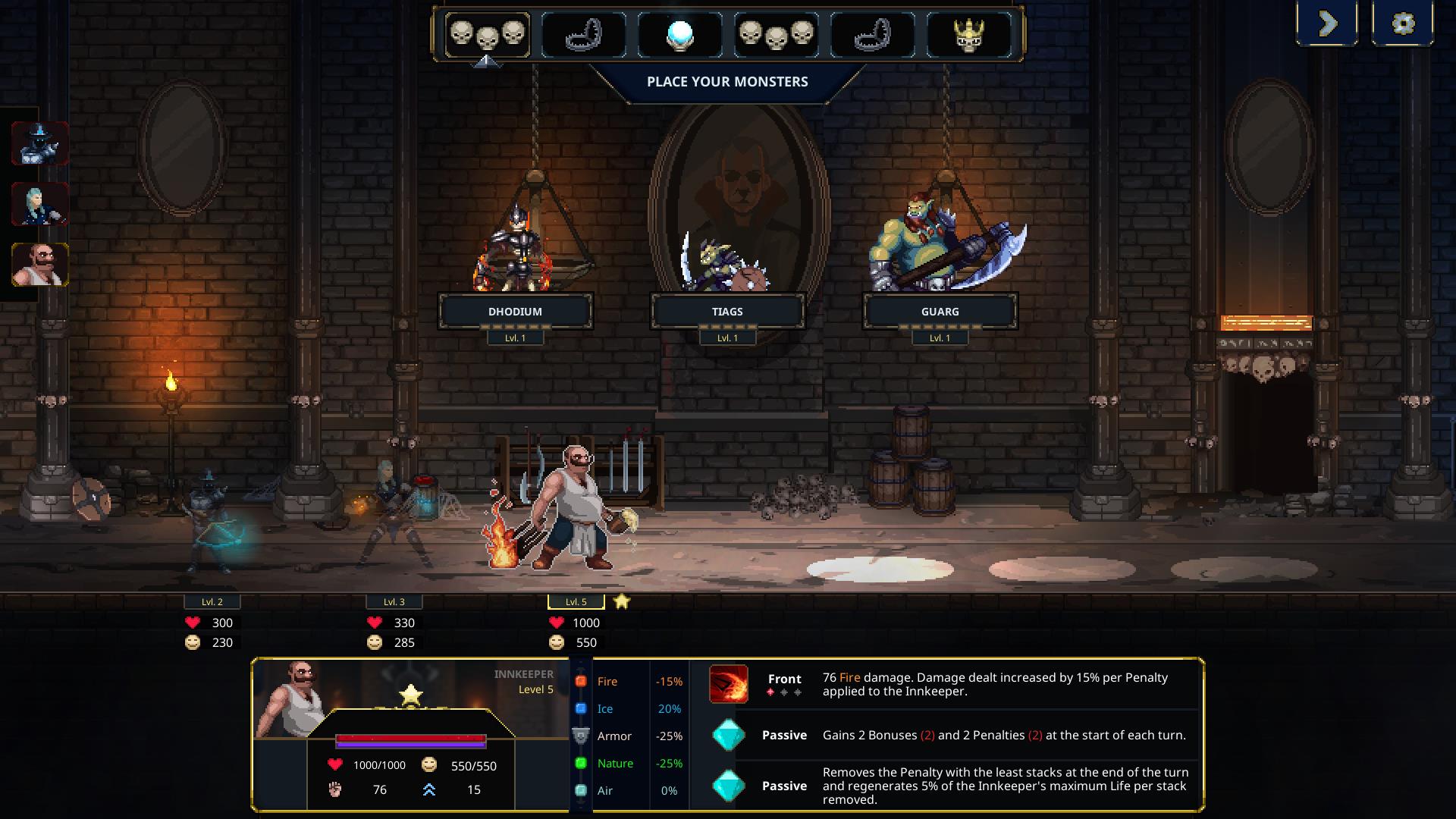 Once the victims have been selected, the player moves into a planning phase, staging a few areas in which they will battle the encroaching do-gooders. Monsters are placed in groups of three, and the placement counts for quite a bit when battle commences. Those at the front and back will be susceptible to melee and ranged attacks, so it’s important to place tank-y guys in those spots, protecting your squishy magic users within a meat sandwich. Other rooms are used to place single traps, or to cast spells.

Once the planning is finished, the heroes appear in the dungeon, and its time to see if your strategies pay off. The heroes move from room to room, battling a group of monsters in one room, then enduring a trap in the next, then another group of monsters, etc. At the end of the road is your tremendously powerful boss, who is the last line of defense against the thieves. Battles play out in a standard RPG manner, with each character’s speed stat determining the turn order. 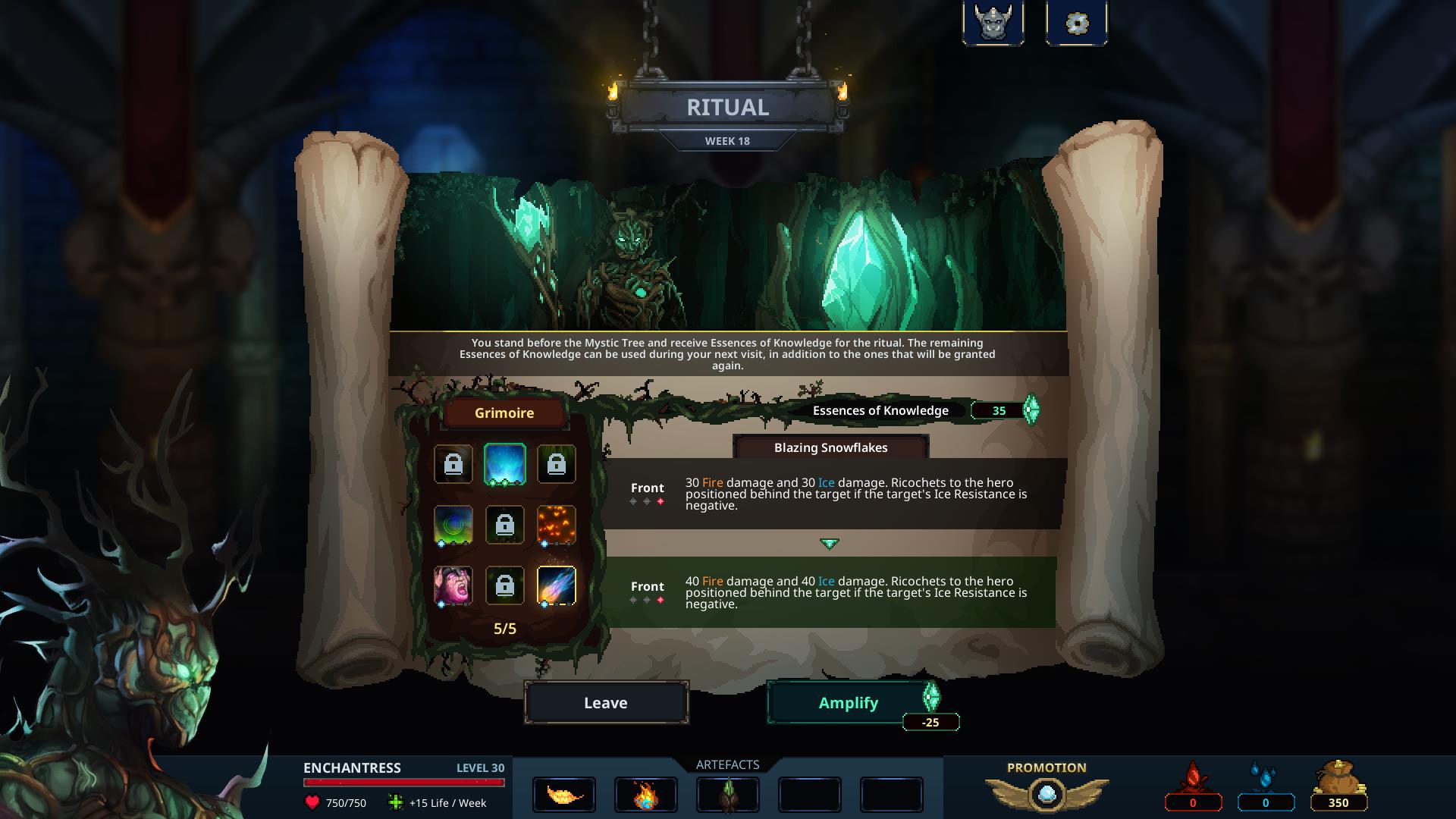 Your first room of heroes are almost assuredly cannon fodder, serving only to soften up the enemy and tear into them with as many stat effects as possible before eventually falling in battle (no harm done; they are usually back on their feet by the time the next group of heroes shows up). The heroes proceed from one room to the next, getting hit with traps and spells before hopefully being stopped by the second group of heroes. I made it my goal to never let the heroes reach my boss, as his large pool of hit points needed to last for the entire run. Get through the run with your boss intact, and it’s off to the next. Die, and your boss retains any experience gained, but you have to do the run again.

A lot of the strategy in Legend of Keepers is undone by the random nature of events. My immediate instinct was to try to build rooms so that they would deliver successive blows that made sense in order. I wanted to first hit heroes with a trap that made them susceptible to poison, for example, then line up a bunch of folks that deal poison damage in the next room. But assuring that you have a good team is next to impossible, since you only get to select monsters and traps from a few being offered. And if by chance you do manage to assemble a decent crew, they disappear when the next run begins, and its back to the drawing board.

That roll-of-the-dice dynamic doesn’t necessarily negate the fun to be had with Legend of Keepers. But folks that come into the game thinking “I’m going to construct a team of ballers” might instead get stuck with “I’m gonna do the best I can with this crew of losers.” It all depends on what resources Legend of Keepers sees fit to provide. 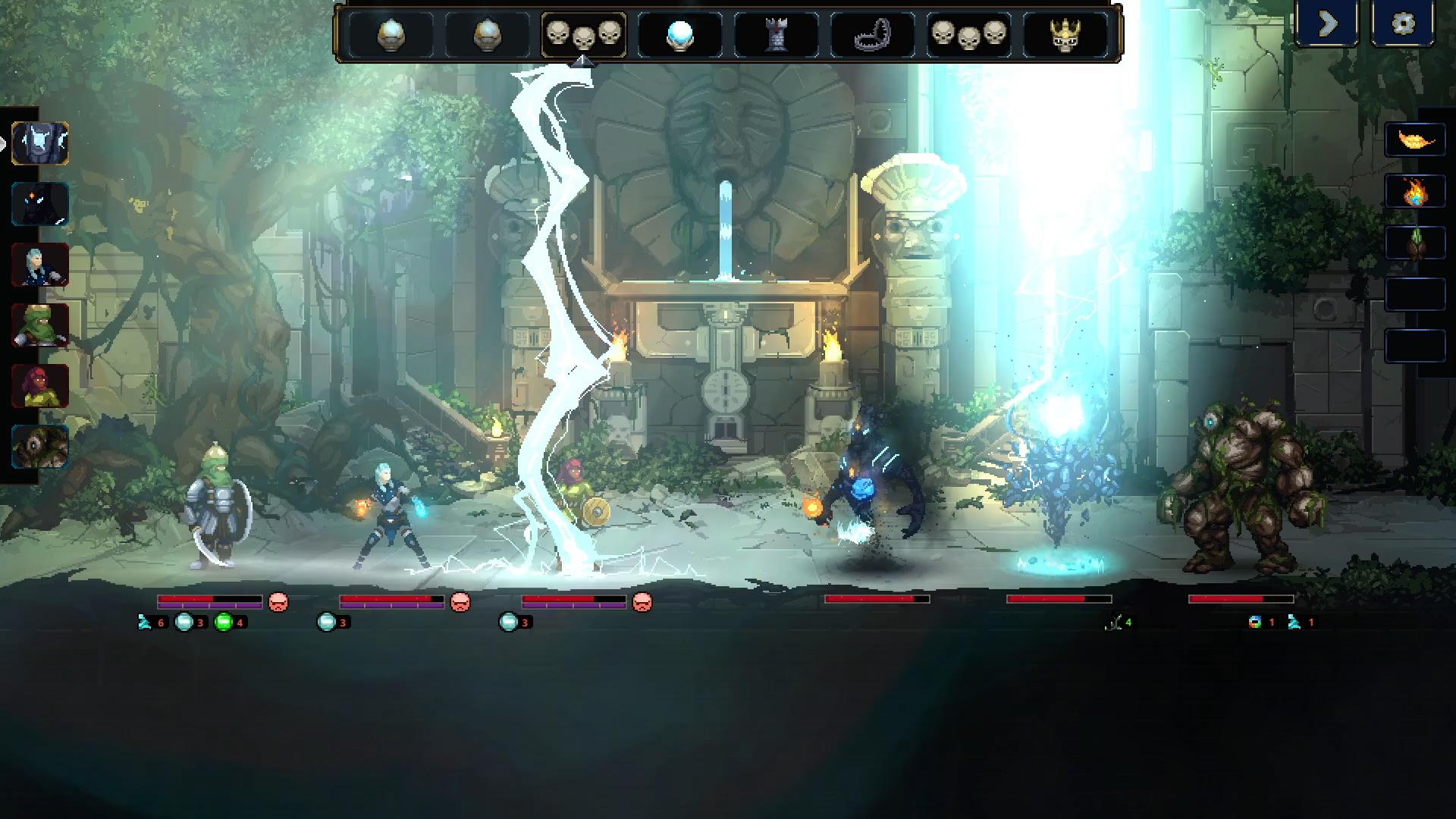 While the graphics and sound in Legend of Keepers are nicely done given the game’s somewhat simple presentation, one issue must be addressed. The font size used is incredibly small, which could likely disqualify some players from enjoying the game. This font goes beyond “I need to squint to see it” and becoming something of an accessibility issue. I feel confident saying that anyone with worse vision than me would not be able to play Legend of Keepers at all, regardless of whether the game is in handheld or docked mode. A lot of the information contained in the text is critical to succeeding at Legend of Keepers, making this an issue that might exclude a fair number of folks that would otherwise enjoy the game.

But font size aside, Legend of Keepers is a pleasant roguelike that will keep RPG fans happy for the eleven or twelve hours it takes to beat it. Legend of Keepers does rely on a bit of luck, but rising to the challenge when you have a bum hand is half of the fun. Take the time to get to know Legend of Keepers, and you will find a fun and mildly addictive adventure hiding down in those dungeons.

Legend of Keepers is a fun roguelike that relies a bit too much on the luck of the draw. Constructing custom teams is a non-starter, which leaves players doing their best with whatever the game doles out. The font size might be an issue for some, but overall, Legend of Keepers is a pleasant not-overly-difficult way to kill twelve hours.