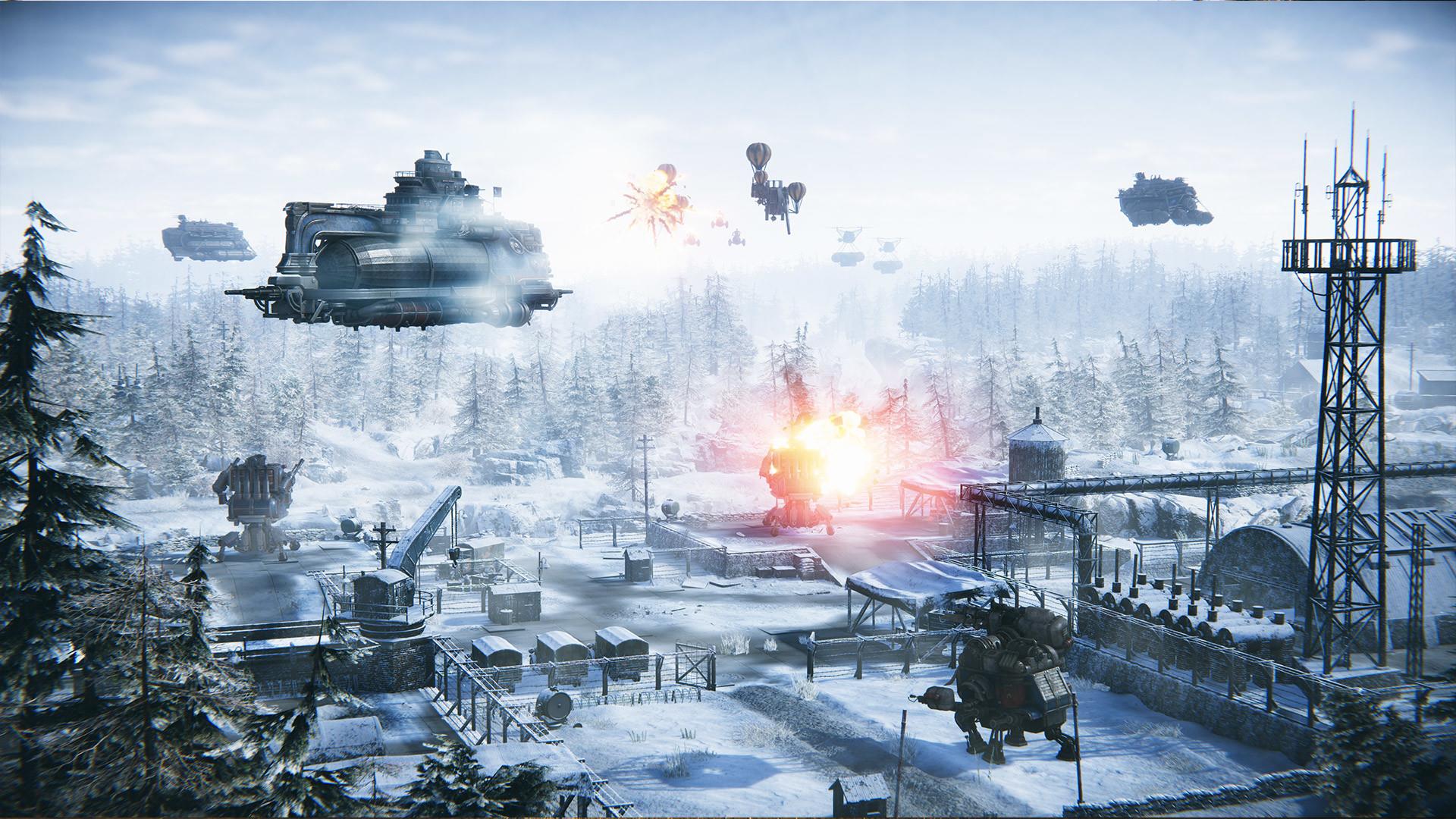 Written by Elliot Hilderbrand on 6/3/2021 for PC
More On: Iron Harvest: Operation Eagle

Iron Harvest is a real time strategy game set in an alternative 1920s where instead of Poland, Russia, and Germany, the world is occupied by countries like Polania, Rusviet, and Saxony. Besides all the changes to locations, Iron Harvest also includes the twist of armored mechs - albeit mechs created in the 1920s - as a staple. The game is based on an alternate world created by artist Jakub Różalski. You may also be familiar with the board game Scythe, which used Różalski's art as its inspiration. In Iron Harvest proper, you follow the campaigns of the three main factions as they fight against the evil group known as Fenris. But I’m not here to talk about Iron Harvest proper, I’m here to speak of Iron Harvest: Operation Eagle. Can you guess which new faction they’ve decided to add with this DLC? 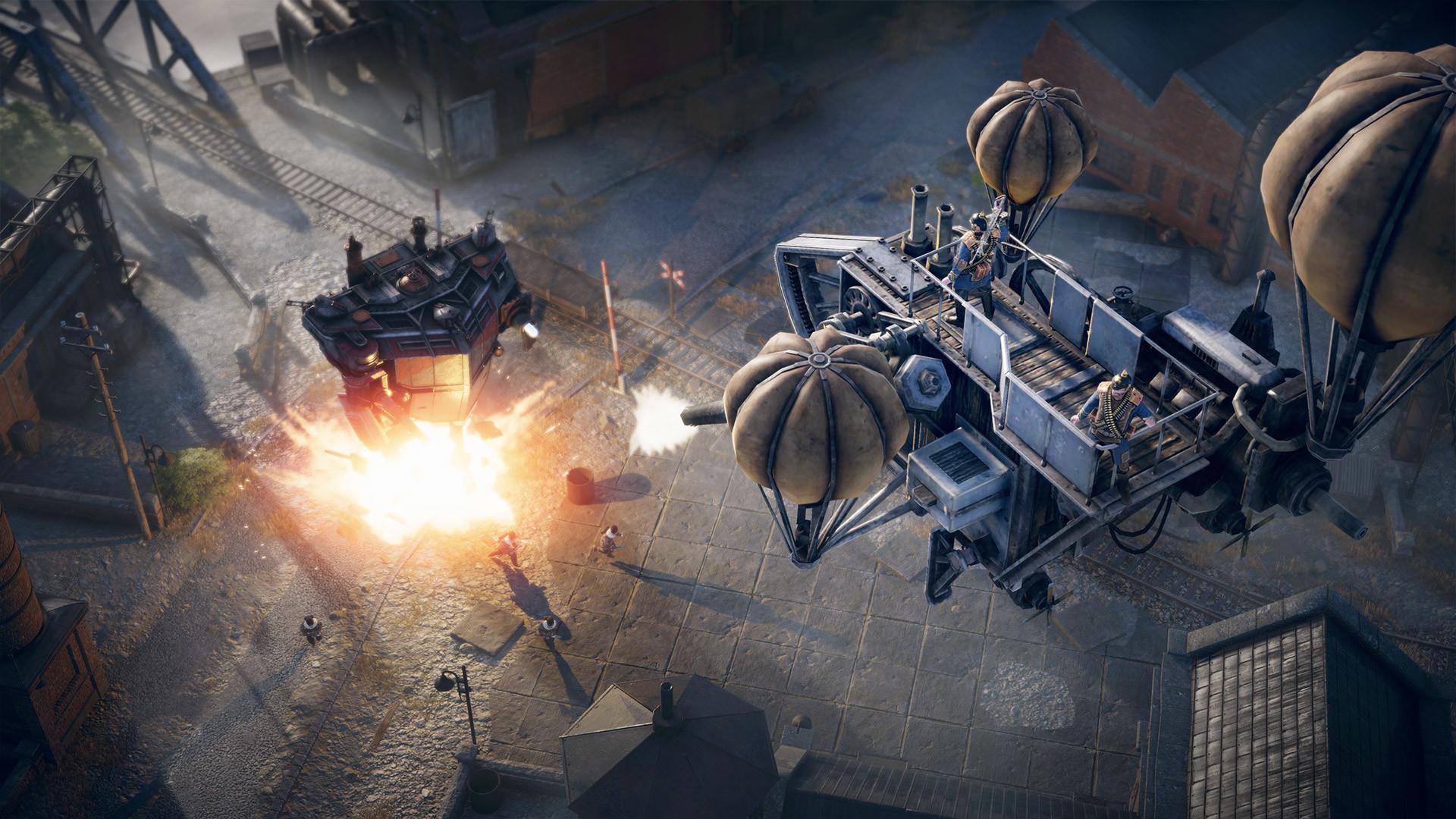 That’s right, step aside other countries, it’s the United States, or in this case Usonia’s, time to shine. What could drag Usonian into the fray? Certainly not land rights, or oil, or spreading freedom to other countries. I say these heavy-handed things, because the game plays up all those storylines in the Operation Eagle DLC. Usonians, who have no business entering into disputes on the other side of the planet, have decided they are going to do just that. 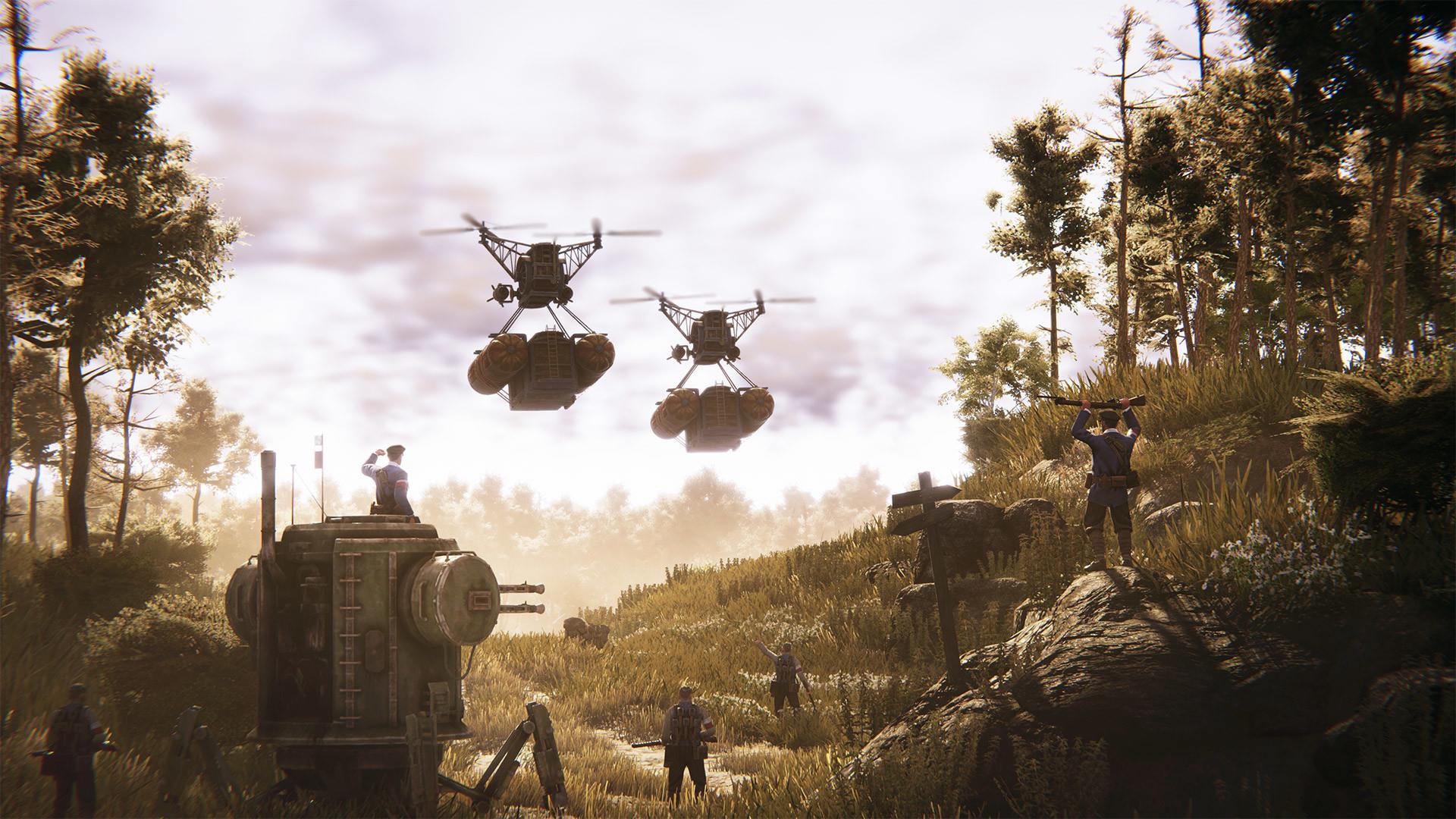 What do I feel I missed out by not playing Iron Harvest first? For one, an amazing story driven campaign. I know that because I enjoyed the story of Operation Eagle so much I’m currently working through the three original campaigns. Operation Eagle doesn’t hold your hand in the beginning of its campaign, which was a problem at the start for me. I understand basic movement and tech trees from playing other RTS games in the past. But Iron Harvest really pushes the need for cover fire and hit and run tactics, especially when playing as Usonia. I felt behind an eight ball at the start, as the computer was running and I was learning to crawl. My first handful of missions took longer to complete than I expected, compared to someone who might be familiar with the base game.

Once you get the hang of the game the missions and maps you play on are fun to fight through. Early on in the Usonia campaign, you find yourself on the icy lands of Alaska, before being transported to the sandy desert of Arabia. Each mission starts off with an objective, but that frequently gets updated throughout said mission. Just when you think you’re close to wrapping things up, the objective updates and now you have to do something like defend the base you just captured, or find the missing troops before you can actually finish. Missions can take hours to complete if you feel unsure of how to go about finishing them. If you want to get the best rating possible, you have to meet additional criteria that can drag missions on. I found myself not even trying the additional challenges as they seemed more suited for someone who was more advanced than myself. 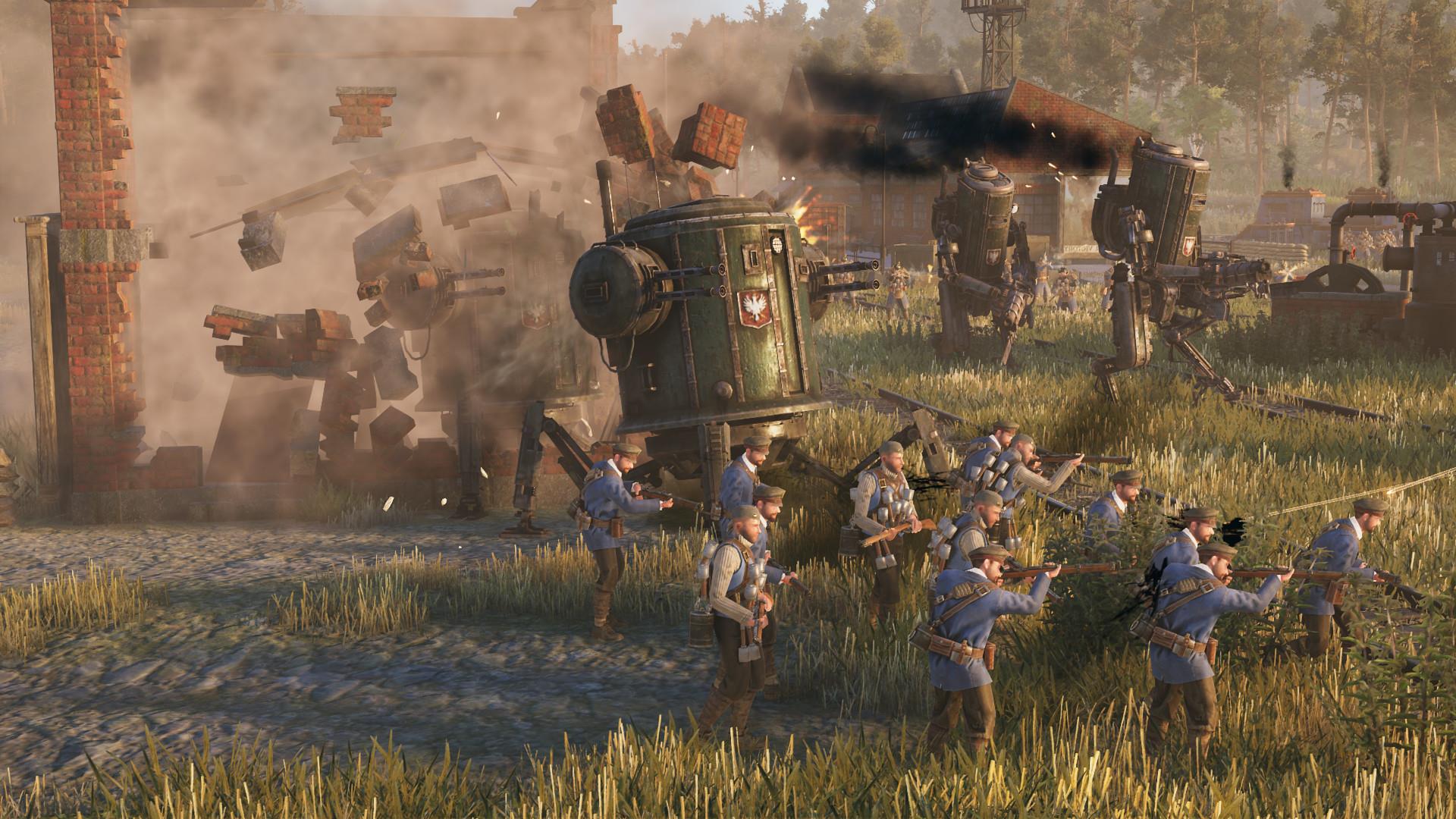 Operation Eagle tells the story of Usonia’s William Mason as he gets sent to “aid” Arabia’s Sita al Hadid. Arabia wants independence as all the outside influences like Saxony are constantly trying to tell them what to do. The story doesn’t feel very original, but it is well told. I found myself looking forward to the cutscenes that play out after each mission. I enjoyed it enough that I had the urge to play the original Iron Harvest campaigns.

The uniqueness of Operation Eagle lies in what new units it brings to the table. With Usonia joining the fight, air units become playable for all the factions. Usonia is gifted with two unique air units, the paratroopers and an airborne hero character.  Airlifts, Skybikes, and giant Gunships are available to all four factions. Flying units feel too powerful when fighting against land troops and mechs. Once you can establish a decent air presence, your only worry becomes the other faction’s air units. Ground units can be mowed down without much of a fight. This is a little disappointing because of Iron Harvest's very ground-focused fighting. Seeking cover behind a wall or doubling back to trick someone becomes almost useless when factions can just fly right into anywhere and either drop off units well behind enemy lines, or just throw flying units at a wall until it breaks. 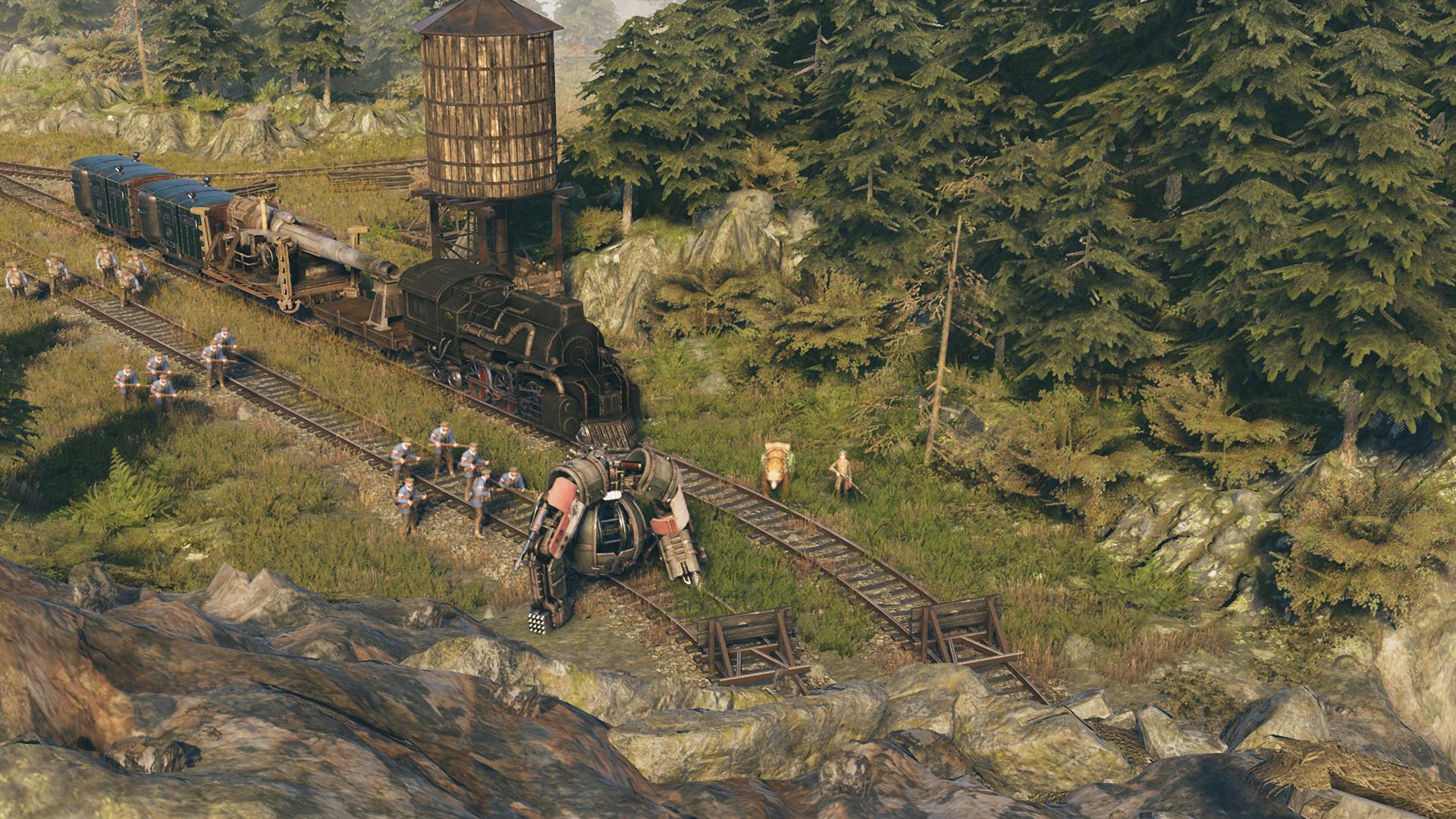 As a standalone title Iron Harvest: Operation Eagle is tough to nail down. Story wise, there is no problem starting with the Usonia campaign. I didn’t feel dropped into a story I missed the first three acts of, even though that is what happened. But the DLC lacks a tutorial system to help first time players which was frustrating, at first. I found myself doing a lot of guess work in the early missions, and ended up restarting them a handful of times to accomplish the task. Once I got the hang of gameplay I didn’t struggle as often, until I upped the difficulty setting to test my strategic skills, or as I found out, my lack of said skills. Still, if you can play the original release first, you might find yourself on better footing for this DLC, especially if you want to engage in the online multiplayer.

Iron Harvest: Operation Eagle is a challenging DLC to a fun RTS game. Even though it can be played as a stand alone title Iron Harvest: Operation Eagle works best when accompanied by the main title Iron Harvest. The introduction of Ursonia and their campaign is a solid addition, even if adding aerial units to the game hurts its overall gameplay. The campaign story alone is worth the price of entry.

I still remember Christmas morning waking up to find a Super Nintendo Entertainment System under the tree. Ever since then I've been a Nintendo guy, even during the Wii U period (still love it). Without a doubt World of Warcraft has been the game to dominate most of my time, again and again, I'll wet my beak on every expansion, if not dive head first ( looking at you Burning Crusade, Wrath, Legion).

The only two genres I steer clear of are racing and sports games (you like the pun?). I find that I have been slowly falling for roguelikes in the past year.

For the last couple of years if I’m not playing games I’m usually making a podcast with my wife Tessa.