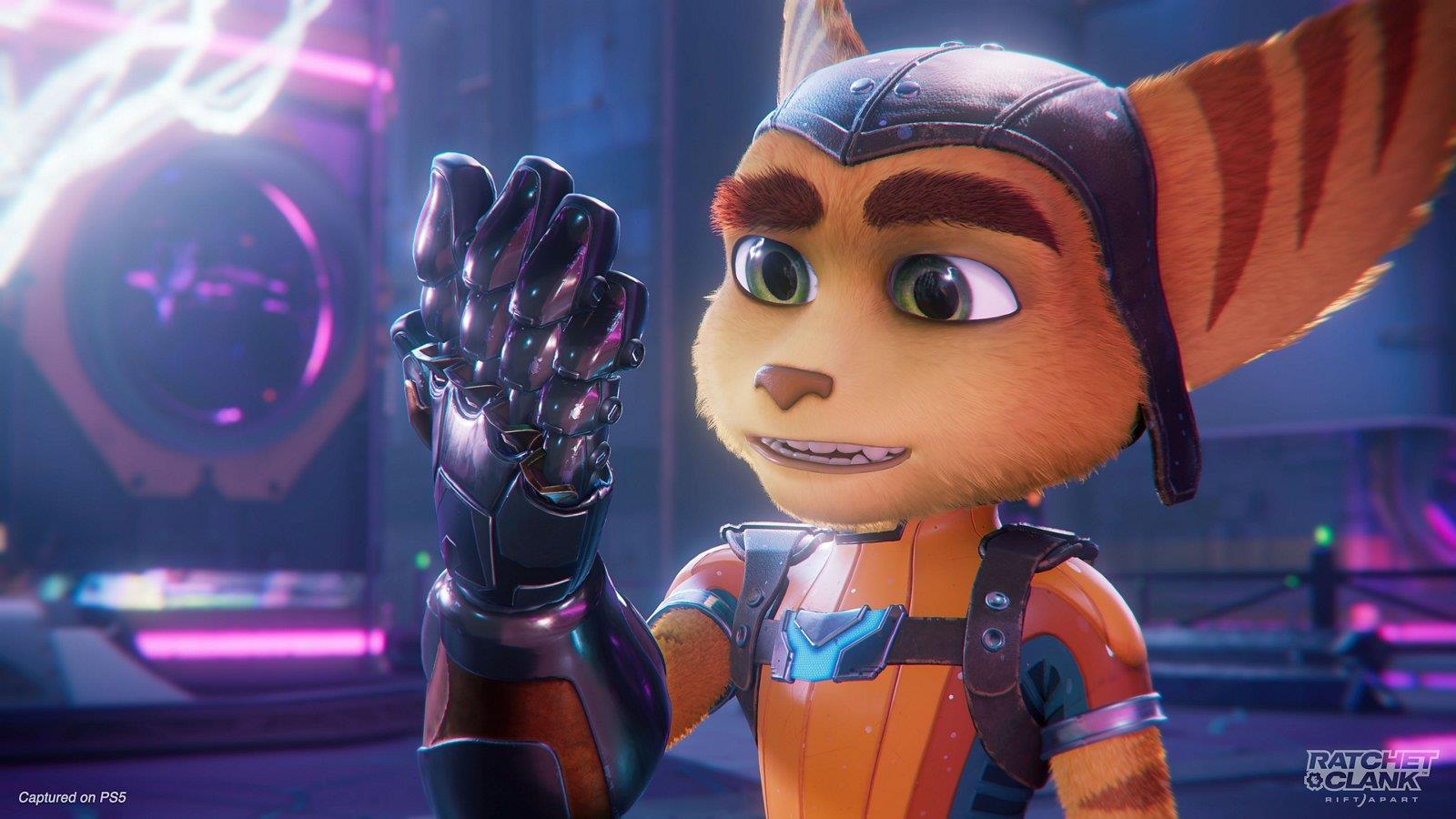 One small step for Lombax, one giant rift-hopping leap for console gaming. Ratchet & Clank’s latest outing on Sony’s latest console represents the most definitive generational leap yet. On the surface, it might seem like there’s not a whole lot different from the fantastic 2016 Ratchet & Clank. Sure, the graphics are even more Pixar-like, the weapon effects are spruced up, the environments are larger and more varied, but all of that is more evolution than revolution. We know the upcoming Horizon Forbidden West and God of War: Ragnarok will be cross-generation releases on PS4 and PS5, but that simply isn’t possible with Ratchet & Clank: Rift Apart without removing the titular rifts. Unlike the aforementioned games, this isn’t a case of just lowering the resolution and framerate to get it running on the older hardware. Rift Apart is truly a next-gen game. 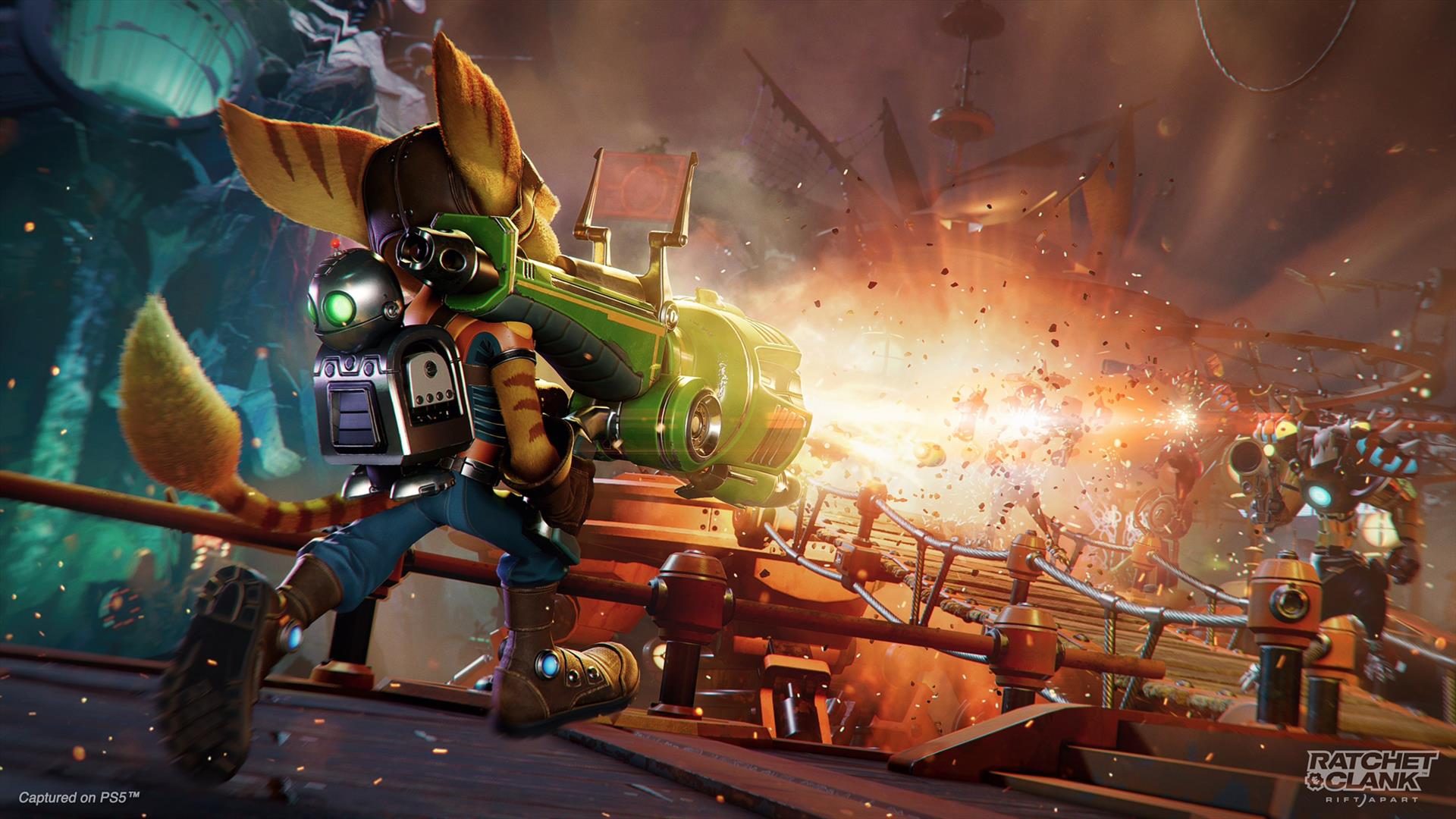 The story starts with titular heroes Ratchet & Clank being honoured by a parade that recounts their heroic tales of old. The Insomniac Spider-Man games do the impressive seamlessly transitioning from cutscene to gameplay trick and it’s equally as impressive here in Rift Apart. The cutscene seamlessly transitions to gameplay and I couldn’t quite believe that this floating parade and the giant balloons were traversable so fluidly. Like I said, it’s not the first time Insomniac have used this trick but it still managed to leave me in awe when it’s so expertly pulled off. Clank plans to give a Dimensionator to Ratchet with the hope of finding more Lombax. Dr. Nefarious, our titular heroes’ longtime incompetent nemesis crashes the party and after some dimension-tearing chaos, a galaxy spanning adventure begins.

As revealed in the promos building up to launch, an all-new female Lombax joins the adventure and the story is all the richer for it. Rivet, who’s part of the resistance, belongs to a dimension wherein Nefarious is successful in his evil plans and has made himself Emperor. On the surface, sure, she looks similar to Ratchet - and both play almost identically - but she’s a different character entirely. In fact, Insomniac does a marvelous job with her character development and giving her a distinct personality. Insomniac, I imagine, had a great deal of fun re-imagining series favourites such as stoner Skid McMarx. In Rivet’s dimension, he actually goes by the name Phantom, and is a badass hacker working with the resistance. 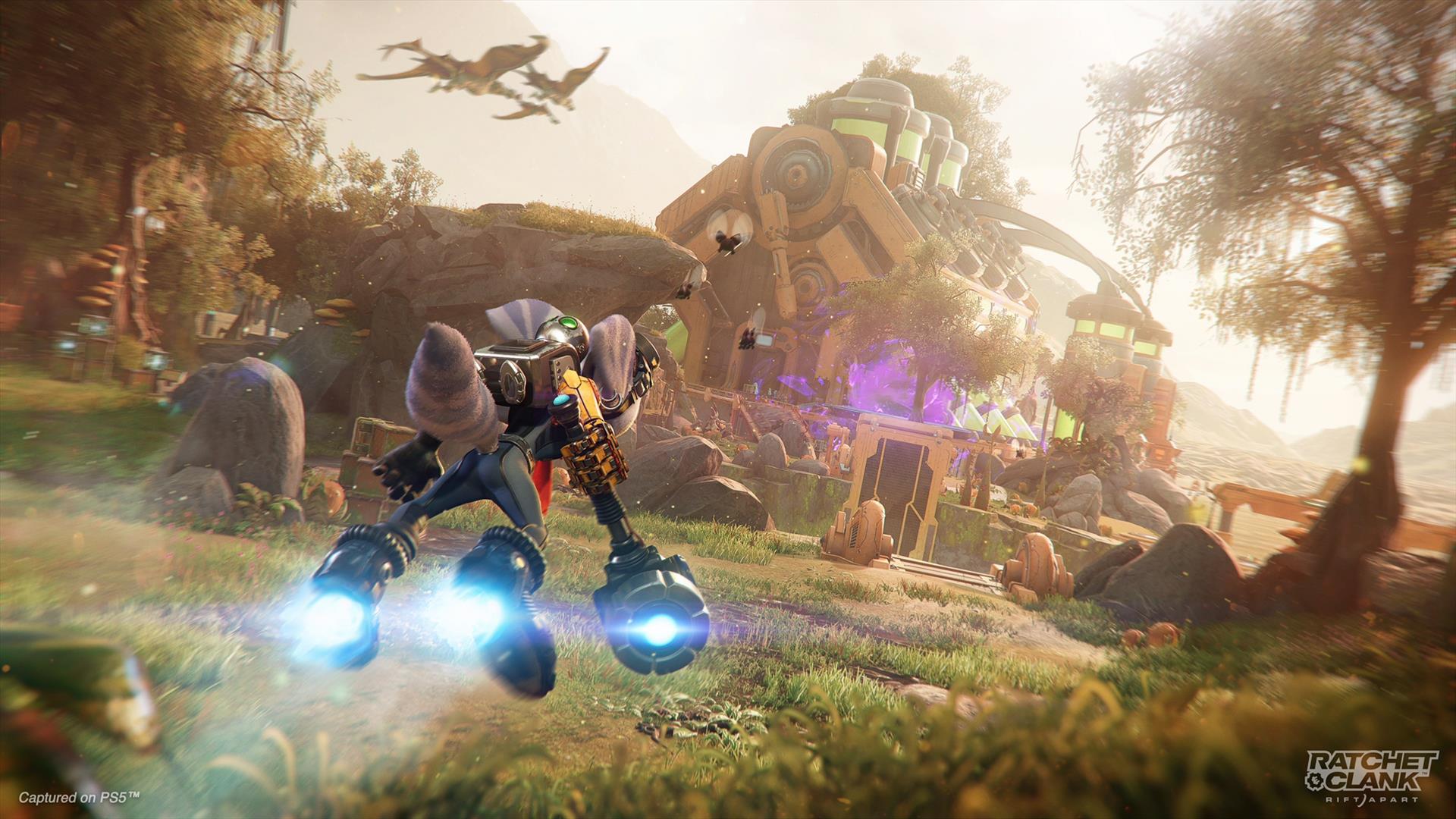 The storytelling is only enhanced by the grand cinematic set-pieces and Pixar-like graphics that the power of the PS5 makes possible. The overall visual presentation is nothing short of spectacular. From Ratchet and Rivet’s realistic fur reacting to the wind, planets teeming with detail and life, to the finely tuned 3D audio, it’s as close as a video game has come to matching an animated cinematic movie on an audio and visual level. This isn’t a riveting, emotionally-compelling story on the level of Sony’s other cinematic first party exclusives but it’s more than serviceable to make us want to follow Ratchet & Clank on a new adventure and meet the new characters.

In their use of the PS5’s SSD technology, Insomniac have set a new standard for the symbiosis between the PS5’s SSD and game design. Not only are players getting the super fast, blink-and-you-miss-it loading screens, the game design is intrinsically influenced by the new technology. Obviously, there’s the titular rifts, which are the biggest spectacle, but there’s also new traversal abilities such as the Phantom Dash. The move allows our Lombax characters to phase in and out of reality, rendering them partially invisible and invincible during the phase shift. This can be employed to traverse previously inaccessible areas or in combat to avoid enemy attacks. Moreover, smaller rifts are scattered across battle areas which can be used to flank enemies. Thanks to the SSD, you can zip between these rifts with no detection of delay or anything loading outside of your line of sight.

In any Ratchet & Clank game, it’s expected that players are provided access to a varied, fun, and downright bonkers arsenal of weapons. Rift Apart takes this to a new level with an array of unique new weapons. The shatterblast is one of the more conventional weapons which fires grenades that explode upon impact. The negatron collider unleashes massive destruction with a beam that goes through multiple enemies. The drillhound digs towards enemies and explodes in their face. The topiary sprinkler, probably my favourite of the bunch, turns enemies into beautiful topiary which makes them easy targets. There’s such a variety that two weapon wheels are required to fit the full arsenal of weapons. 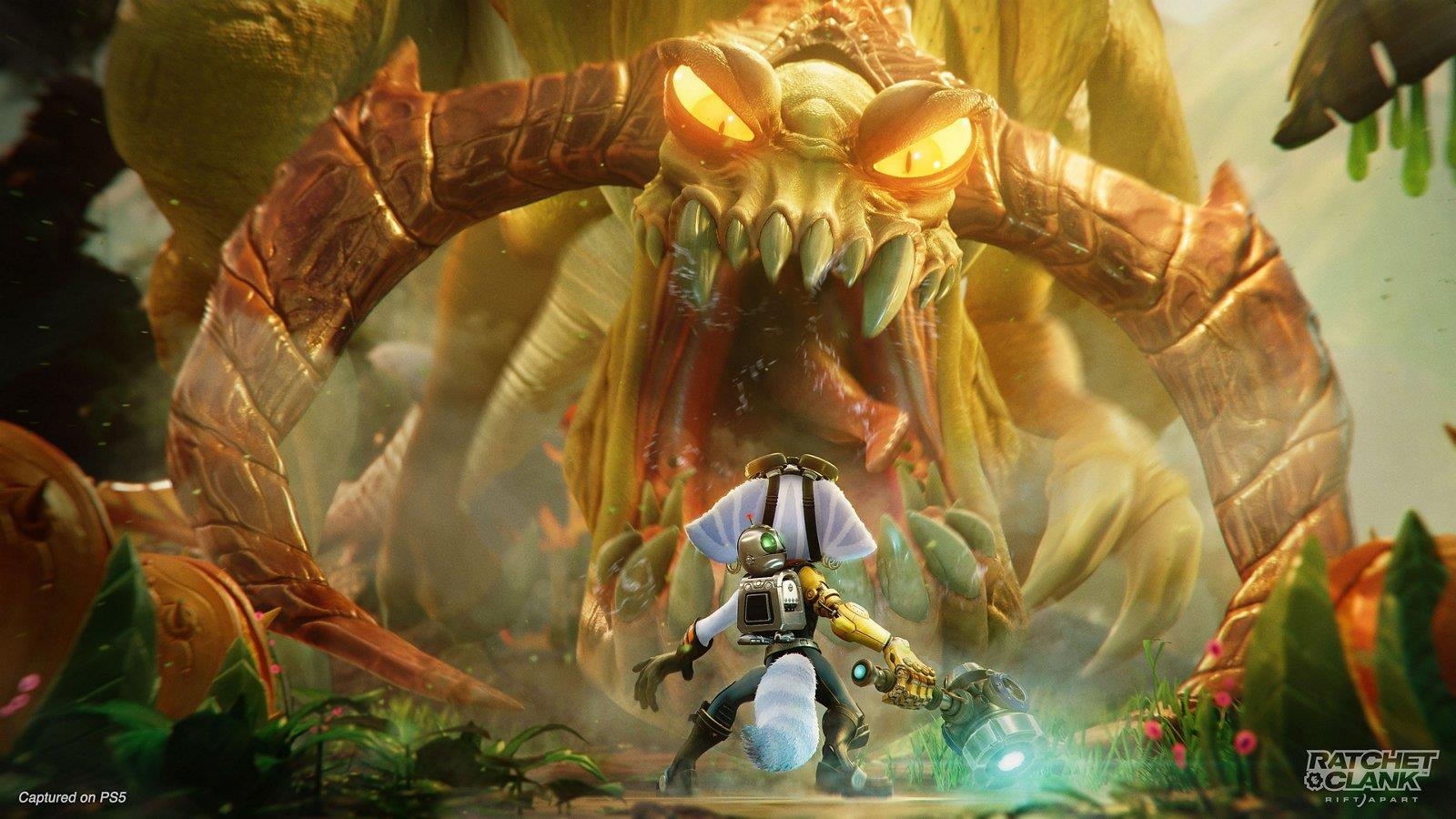 As a PlayStation 5 first party exclusive, it’s a given that Rift Apart makes use of the immersive DualSense controller. Most often, players will be making use of the adaptive triggers which play a big part in combat. Depending on whether you pull the trigger down halfway or fully, certain weapons will fire in different modes. For instance, the staple blast pistol will fire slower, more precise shots when the trigger is pulled down halfway. Pull it all the way down, though, and the gun will fire in a less precise rapid fire mode. This feature is implemented with most weapons in the game. Another example, a shotgun-like weapon in The Executor will fire a single barrel with a halfway press of the trigger. A full trigger press, however, will shoot both barrels. With glove weapons, a halfway trigger pull allows for a throw arc whereas a full pull goes straight to a throw.

Haptic feedback is also implemented in combat scenarios with weapons such as the Topiary Sprinkler, which turns enemies into topiaries, featuring tuned haptic feedback to complement the audio cue that enemies have indeed been turned into topiaries. To some, the haptic feedback might seem inconsequential but it really has to be experienced to understand how much it adds to the immersion, collating what’s happening on screen and what you’re feeling in your hands. This is a more subtle example of haptic feedback but it’s also at the forefront in big cinematic set-pieces with explosions and a lot of action going on. The amalgamation of adaptive triggers, haptic feedback and Sony’s 3D audio make for an altogether more immersive experience. 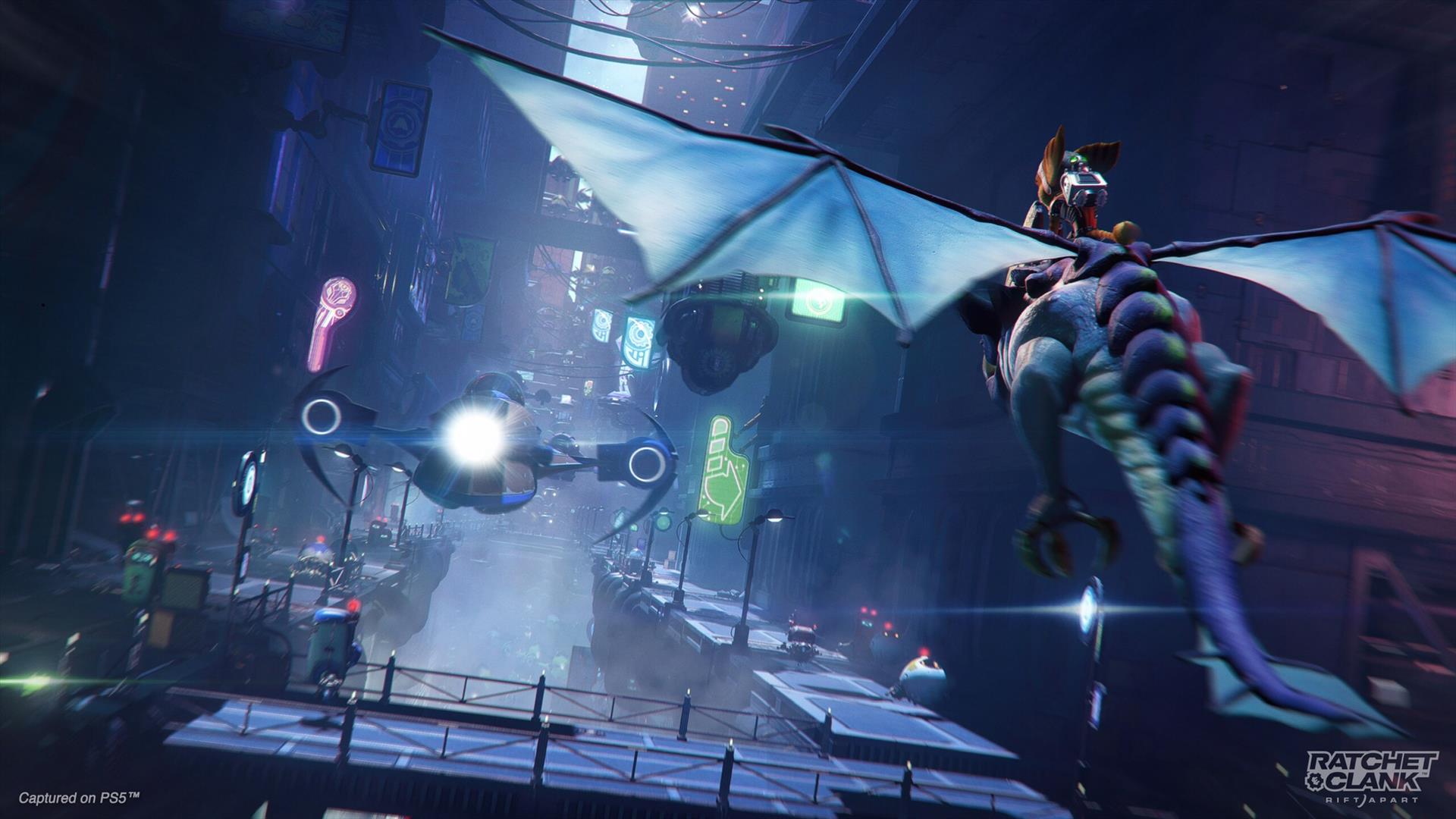 Since the Performance and Performance RT modes weren’t immediately available when the review codes were sent out, I played the majority of the game on the Fidelity mode. Though, having explored a few planets on the Performance RT mode since it was added in the day one patch, it’s become my personal preferred mode to play on. Truth be told, people who aren’t eagle-eyed when it comes to minor visual drawbacks will get more enjoyment from the fluidity of 60 frames per second gameplay. The ray-traced Performance mode doesn’t provide quite as sharp an image but it’s worth it to get the benefit of ray-tracing. No matter what mode you play on, Rift Apart is a visual delight.

Players can customise Ratchet and Rivet with armor sets that provide varying bonuses. Armor pieces are most often rewarded for completing side objectives and exploring optional pocket dimensions. Other collectibles in the game are hidden behind certain inaccessible areas that require you to come back later with a specific tool to access. Spybots provide interesting info on the history of planets you travel to and Lorbs uncover a part of mysterious Lombax history. Gold bolts return and finding them unlocks various in-game rewards such as wrench/hammer skins for Ratchets and River respectively and more. Fans of Insomniac’s Sunset Overdrive can even replace bolts with cans of overcharge. 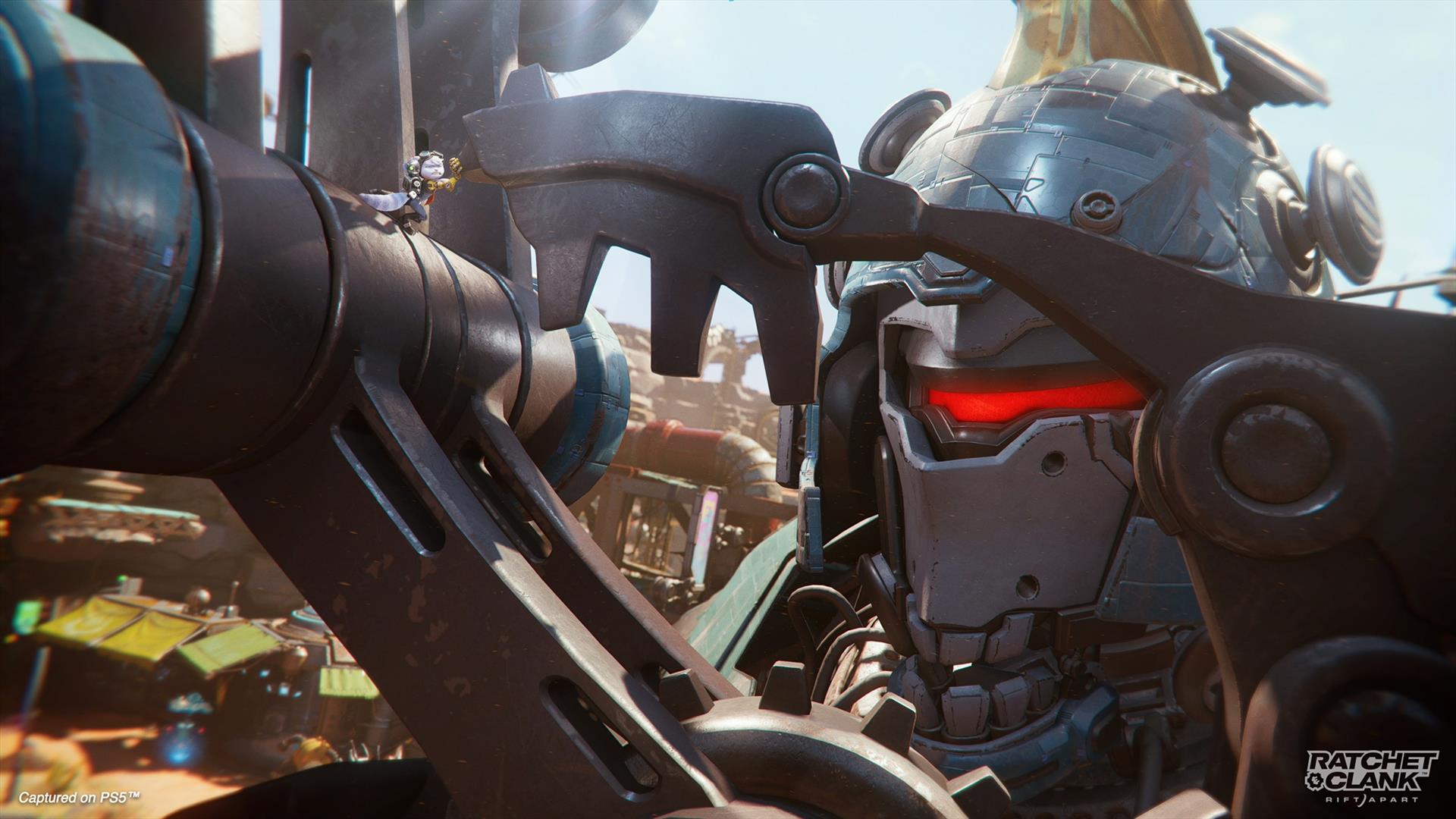 Kudos must be given to Insomniac Games for the suite of accessibility options available that make the game as inclusive as it can be. As an action 3D platformer, there’s often a fair bit going on in the moment-to-moment gameplay between combat and movement. So, there’s multiple accessibility options to make controls easier and to lower the difficulty for those who require it. There’s also a wide range of visual options such as shaders and high-contrast options all of which make the game more accessible. It’s a continuation of what Insomniac started with their Spider-Man games and it’s commendable to see so much effort being put into making games more accessible for all players.

Ratchet & Clank: Rift Apart is the perfect reminder of why I fell in love with video games in the first place. The theme is light and I can sit back and truly enjoy what I’m playing. The graphics are a visual delight and the cast of characters is endearing and easy to fall in love with. 3D platformers are no longer the dominant force they once were, but Rift Apart shows there’s plenty of life left in this genre. The weapons are bonkers but undeniably fun to wield. The platforming is inventive and finds ways to evolve even after decades of essentially the same thing. There’s a reason why the Ratchet & Clank series has been going strong for almost two decades now. When executed well, they’re an absolute joy to play. Thanks to the true generational leap that the PS5 provides, Rift Apart is not only a must-play Ratchet & Clank title, it’s a must-play PS5 blockbuster title. Anyone looking for a game to demonstrate what’s possible with the right amount of imagination and creativity on the new PS5 hardware, look no further than Ratchet & Clank: Rift Apart.

Ratchet & Clank: Rift Apart is a true showpiece of new-gen technology. Whilst the internet argues over the matter of cross-generation games, Rift Apart avoids any such controversy since what it’s doing simply isn’t possible on the older hardware. I was tempted to go ahead and award a perfect score, but a familiar formula and some lacklustre puzzling prevented me from doing so. On the whole, though, this is gaming’s summer blockbuster in the same vein that Hollywood emphasises this season for its big releases. For those with a PS5, it’s an absolute must-play as a showcase of what’s possible beyond just prettier graphics and faster framerates.