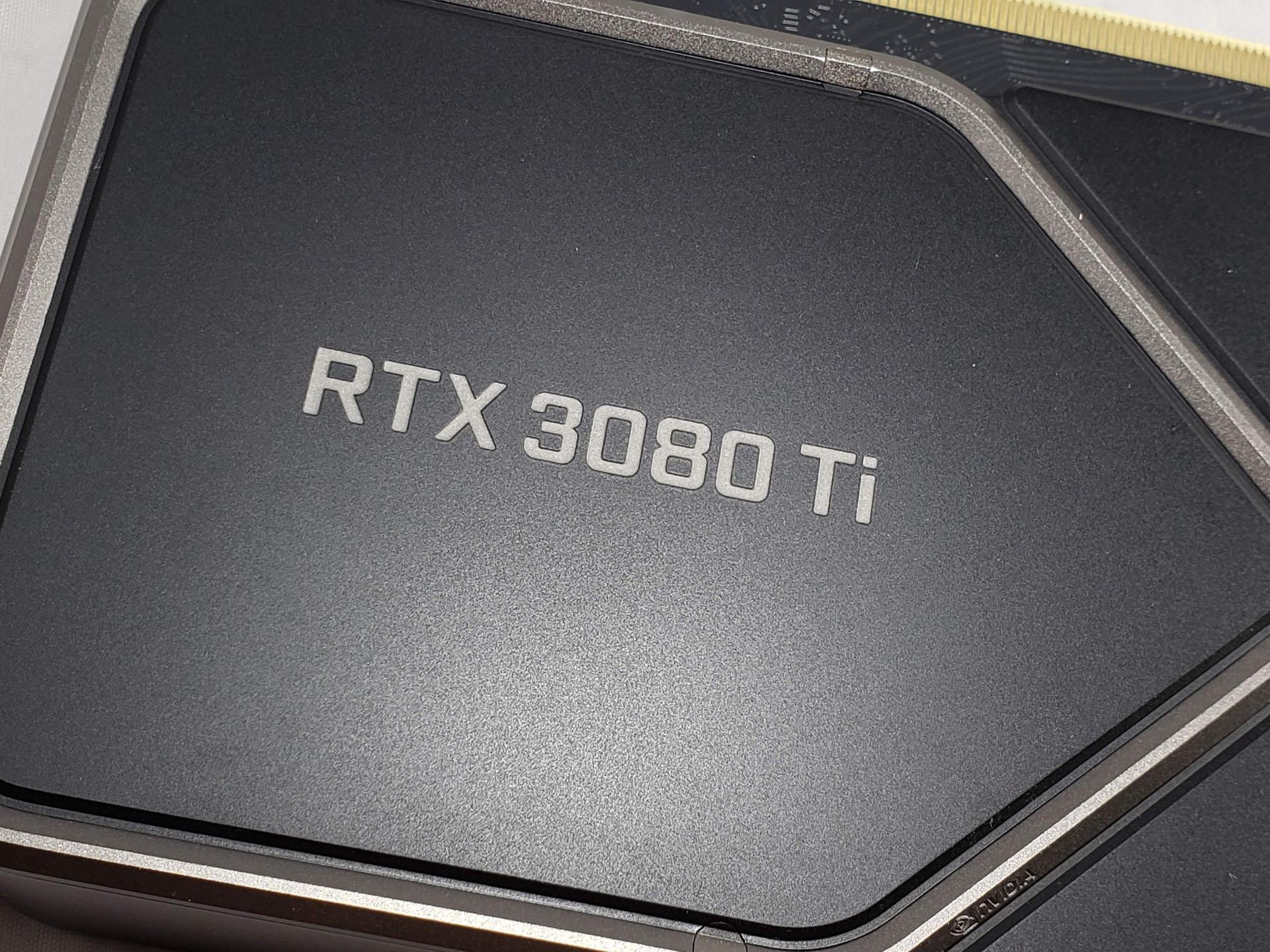 Often rumored throughout the past few months and probably speculated by some folks when the RTX 3080 was released, NVIDIA has finally let loose the GeForce RTX 3080 Ti. We’ve seen many leaks the past few weeks so now that the card is finally in our hands, how does it stack up to what NVIDIA currently has? 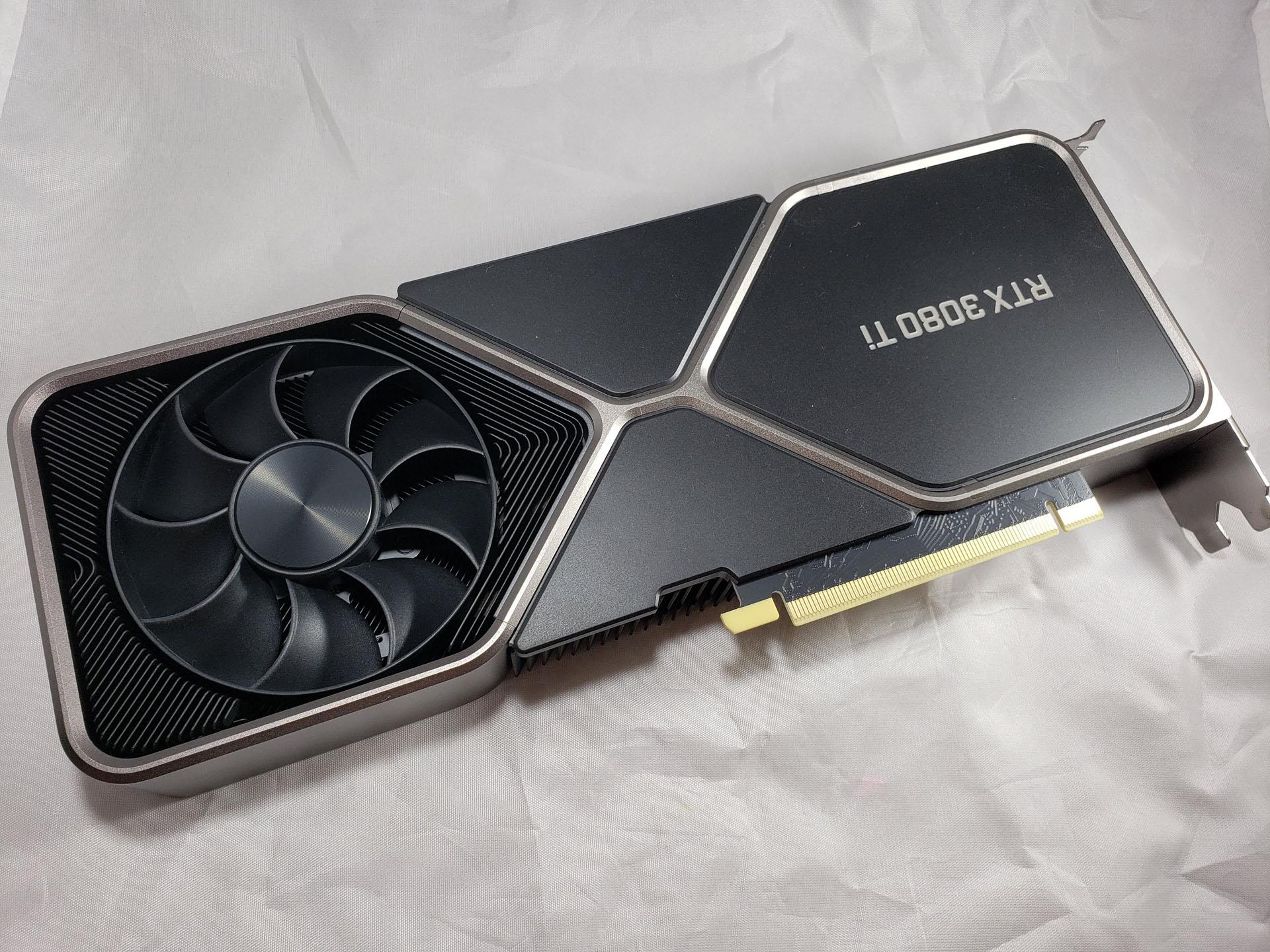 It’s been argued that the GeForce RTX 3090 isn’t truly the highest of the high-end gaming cards and that it should be considered as more of a Titan class card. I’m not going to sit here and debate it one way or another, but with the launch of the GeForce RTX 3080 Ti, we have a card that on paper is pretty close to the GeForce RTX 3090 in terms of raw power. The chart below shows how the 3080 Ti stacks up with a RTX 3080 and a RTX 3090. 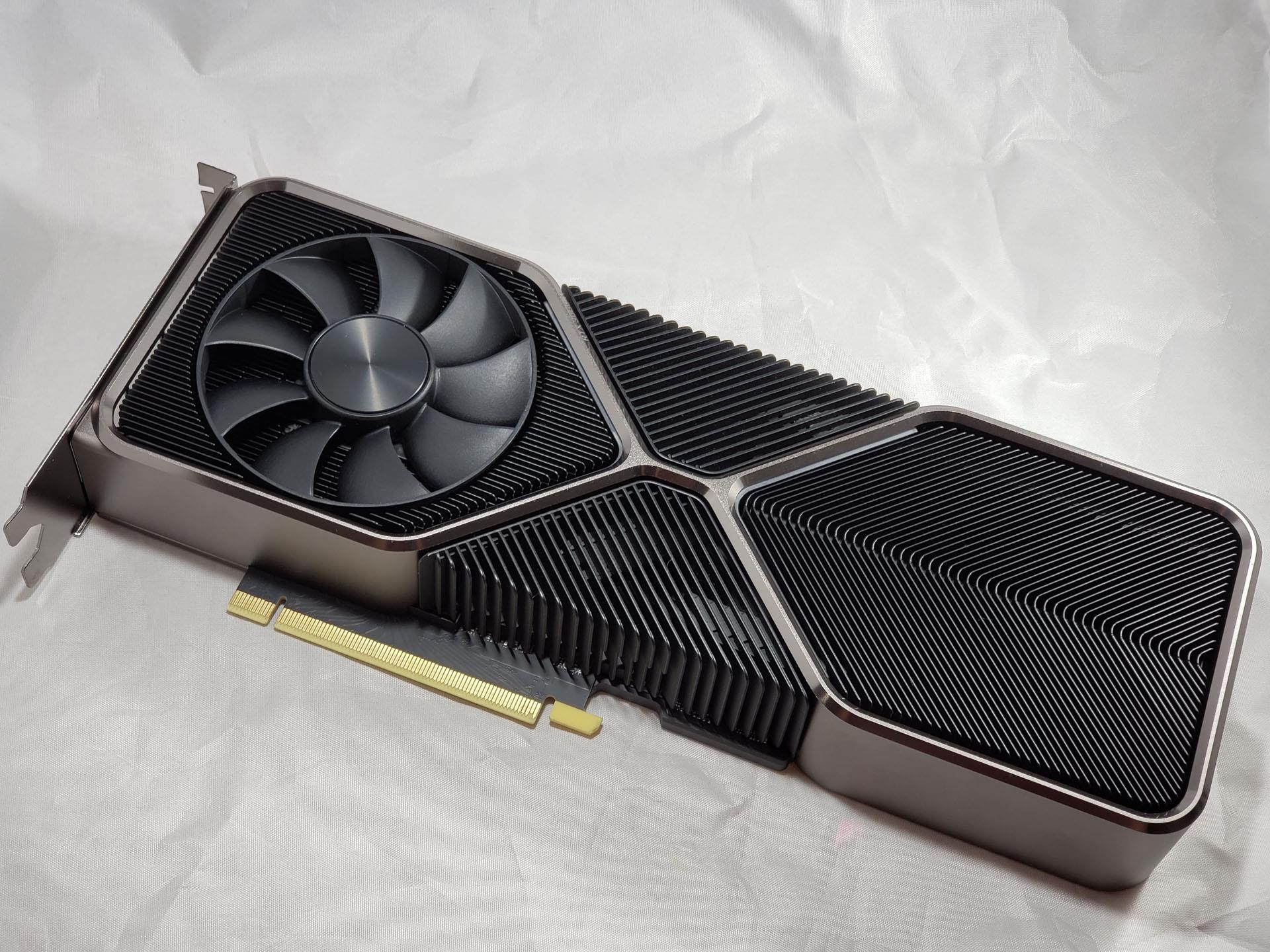 Physically, it looks pretty much like a GeForce RTX 3080 with the same heatsink fan design that was quiet and cool. The fan turns completely off when there’s little to no load on the card. It’s the same length and width as NVIDIA’s Founder’s Edition RTX 3080. You have the same connectors with three DisplayPort 1.2a and one HDMI 2.1 port. Finally, the same 12-pin power connector is on top in the same location and orientation, with NVIDIA supplying a dongle if you don’t have a 12-pint connector from your power supply. If you looked at the card, you wouldn’t know it was an RTX 3080 Ti if it weren’t for the branding on the side.

Curiously, as this card seems like it’s close to the 3090 minus half the ram and some CUDA cores, it’s still using the two slot cooler that the RTX 3080 has. The GeForce RTX 3090 has a three slot cooler for the Founder’s Edition. Would the dual slot cooler be good enough for the RTX 3080 Ti? I did run some temperature checks on the card while running Unity’s Heaven benchmark, which I’ll touch on in a bit later. 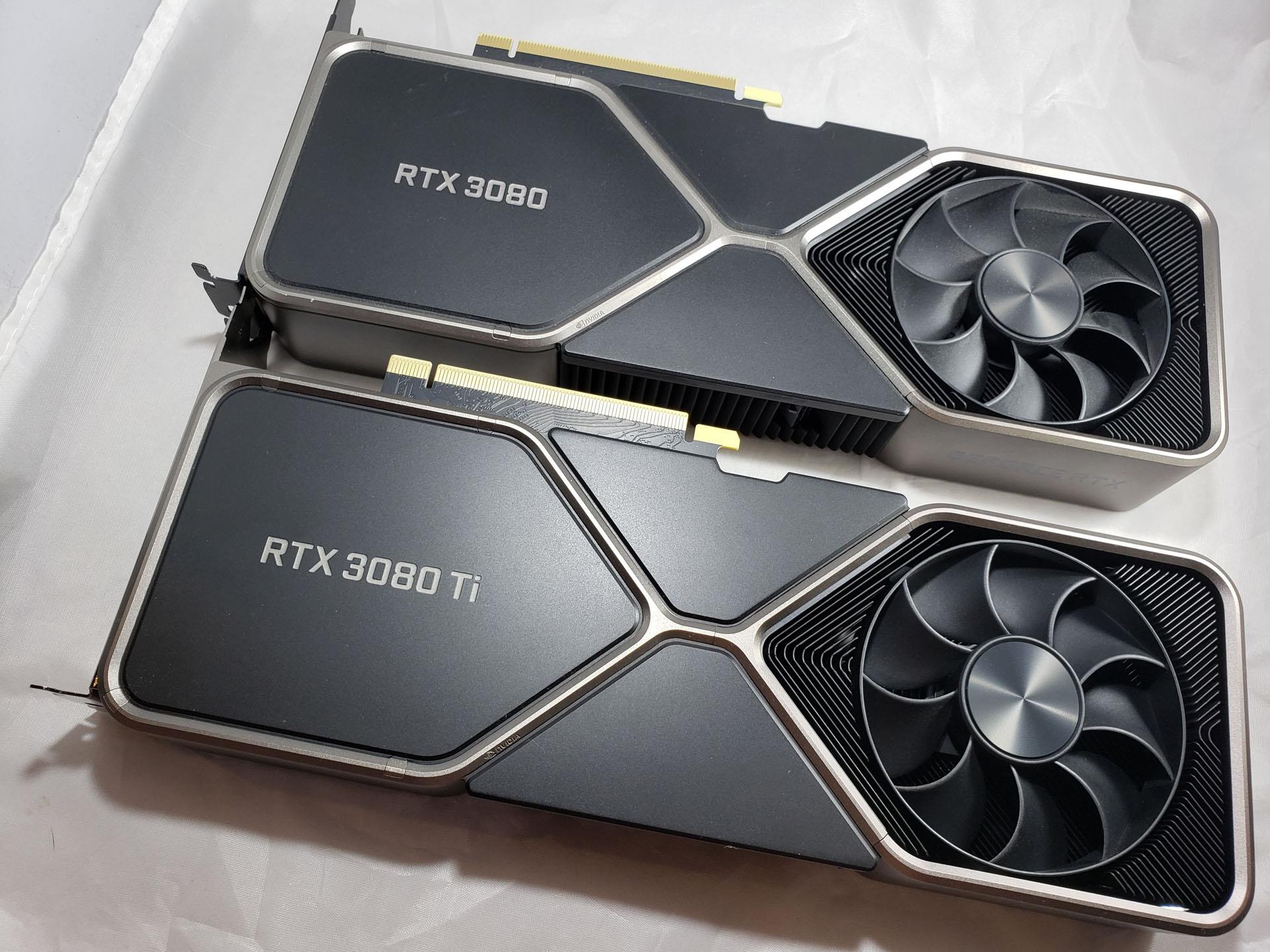 As with all the previous Ampere cards we’ve reviewed, you get a lot of extra features that enhance gaming when they are supported such as NVIDIA Reflex for lower latency mouse inputs, DLSS for improved performance, and ray tracing. More and more games are using ray tracing features, which I’m very happy to see, as some games look better with the lighting, shadow, and reflection features turned on. With Ampere, you can now enable RTX and not suffer from the performance penalty like the Turing cards did. 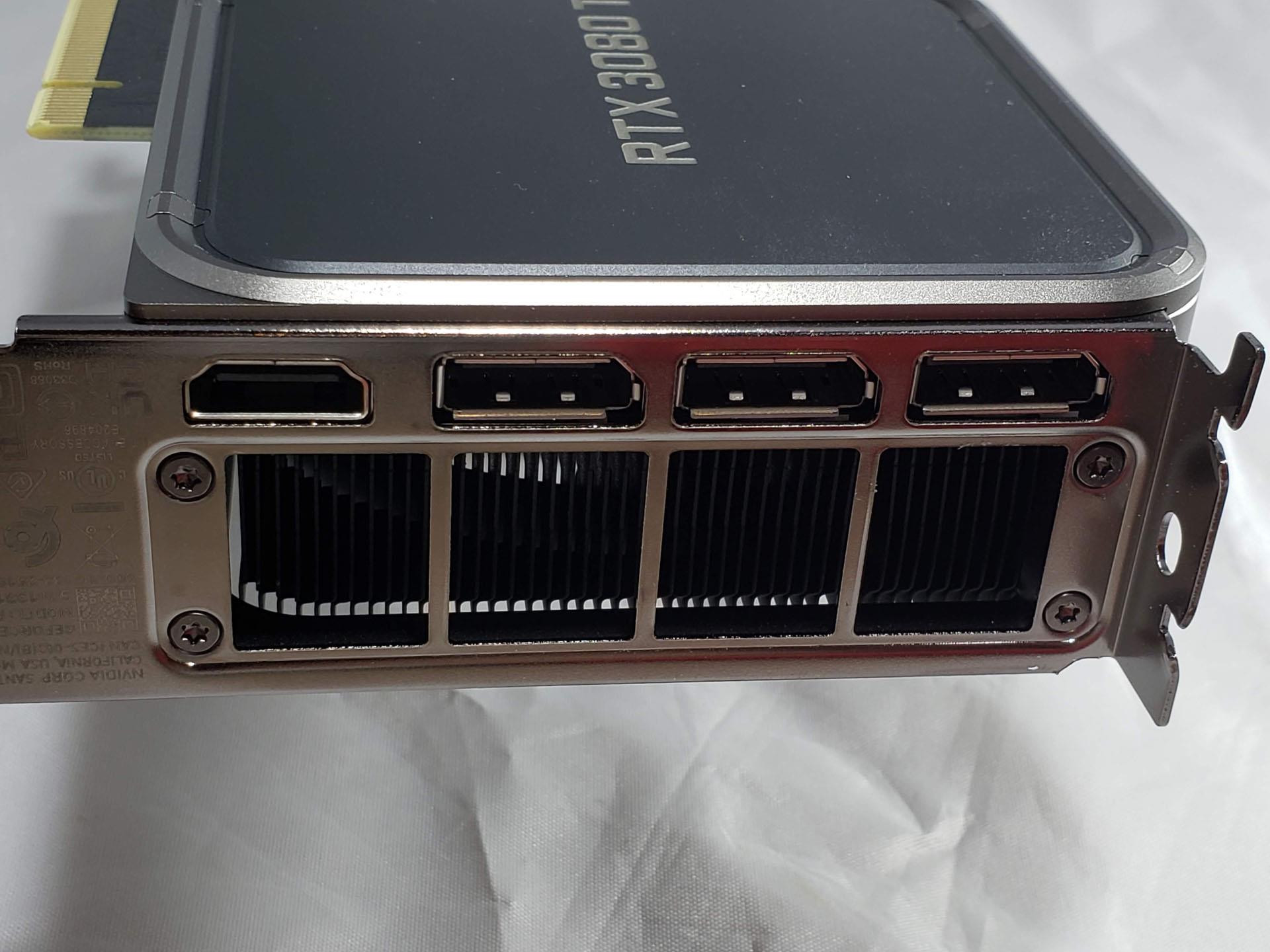 This is the first card that we’re using my brand new test bench on as it’s a nice improvement over my old Intel setup. It consists of the following:

Recently, MSI released a firmware update to enable Resizable BAR on my setup so that’s enabled for all these tests.

As always, tests were done with three runs and the scores were averaged. For games without a built in benchmark, I tried to find a good repeatable area to do my runs with minimal deviation. I set the games to their max preset except for Metro Exodus, which I have set at Ultra instead of Extreme. For Watch Dogs: Legion, the tests were pretty consistent with the final results using whole numbers rather than a few decimal places like MSI Afterburner, so I just left them as is and took the report values rather than running MSI Afterburner to measure the frames per second. Something new for this round is using a VR benchmark. Since I’m a huge VR gamer, I thought I’d throw that in to see how the Valve Index performs across the various video cards. 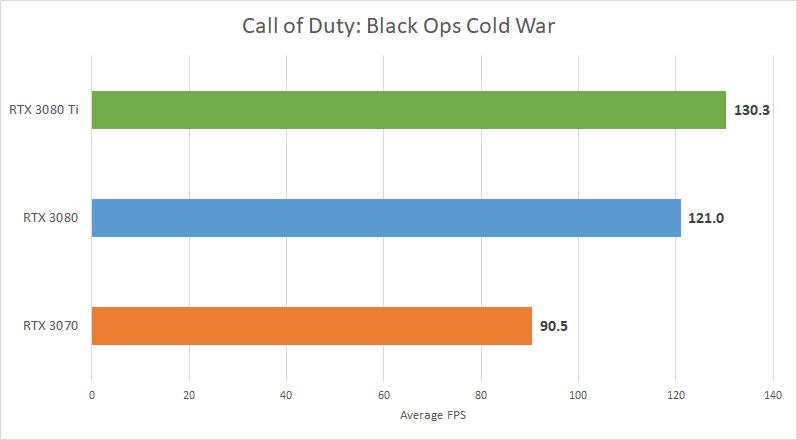 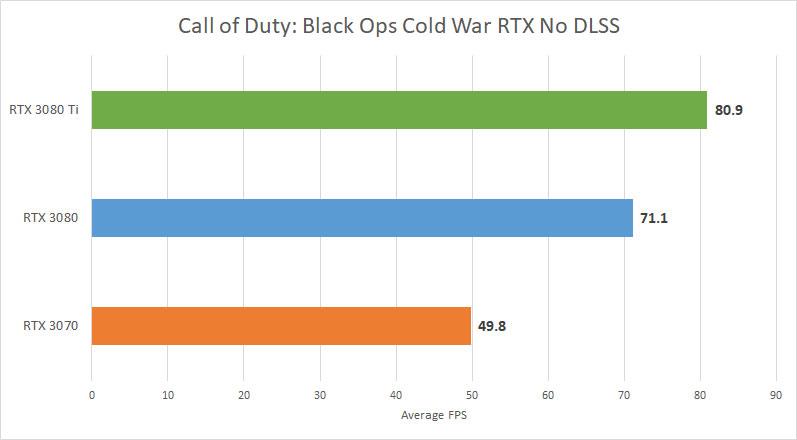 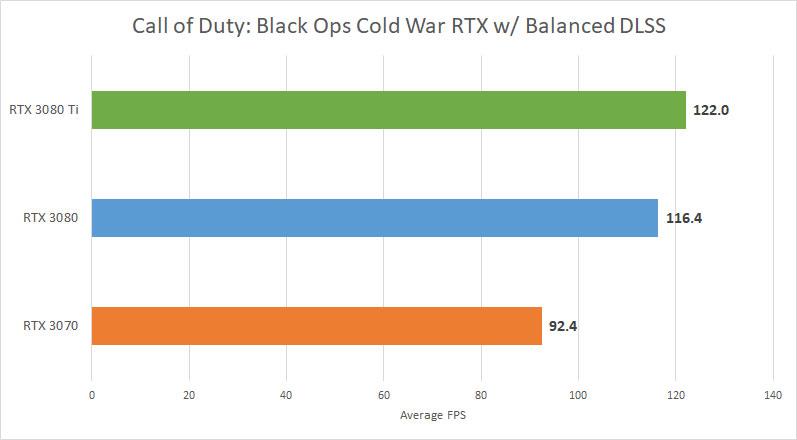 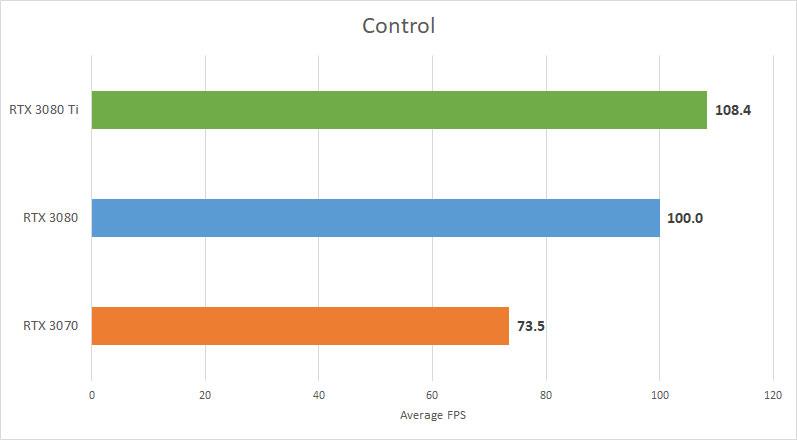 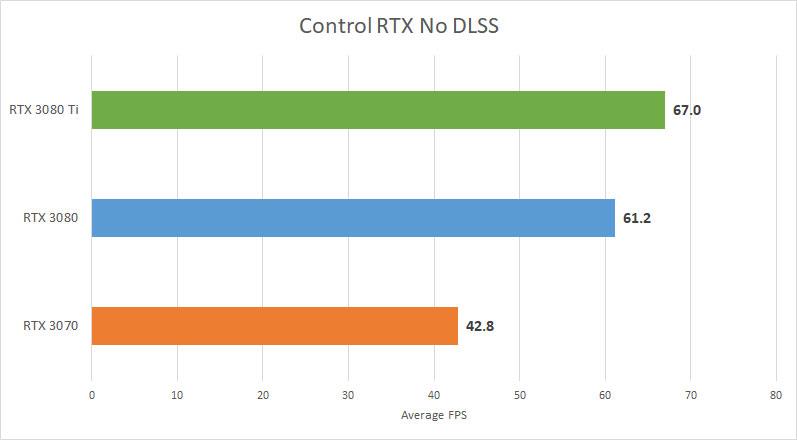 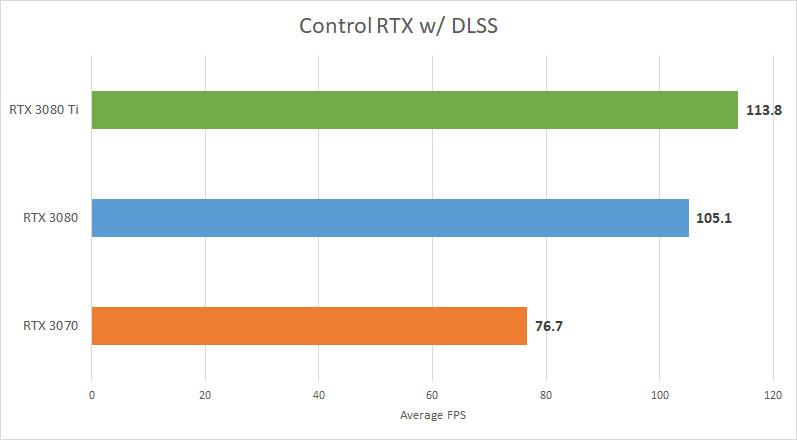 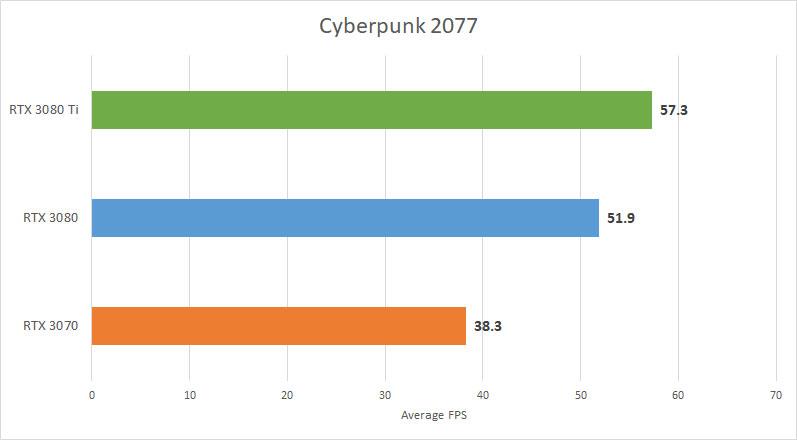 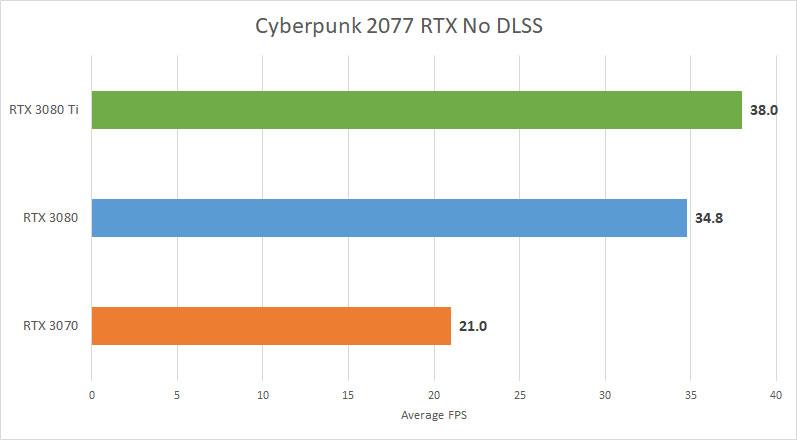 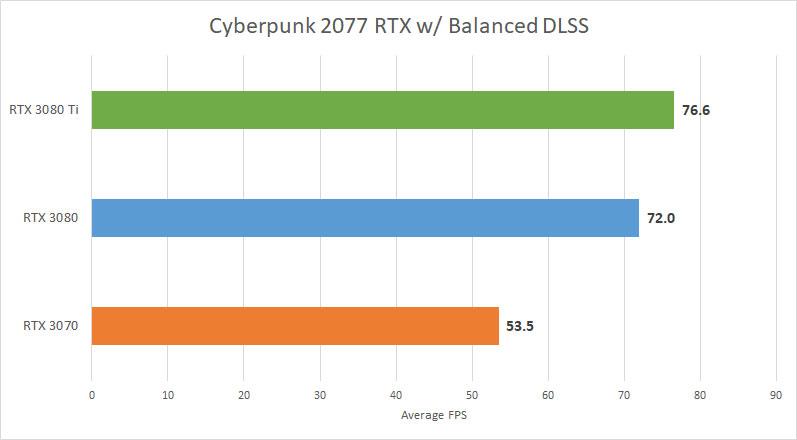 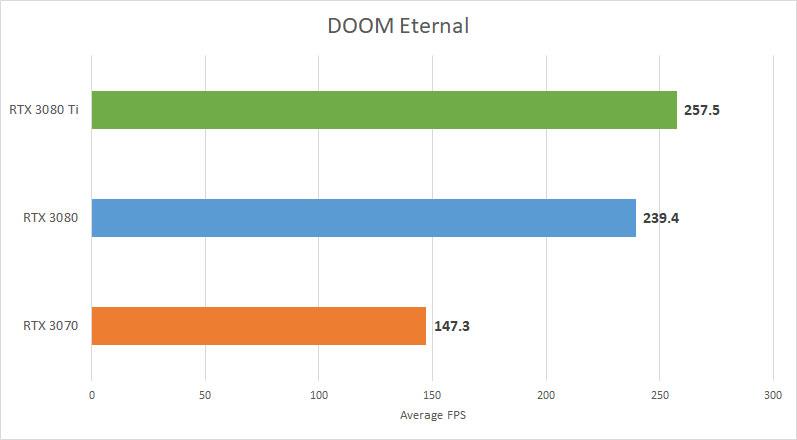 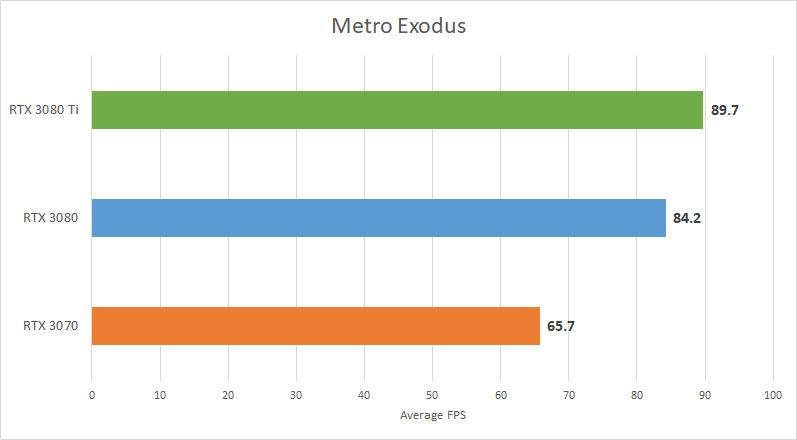 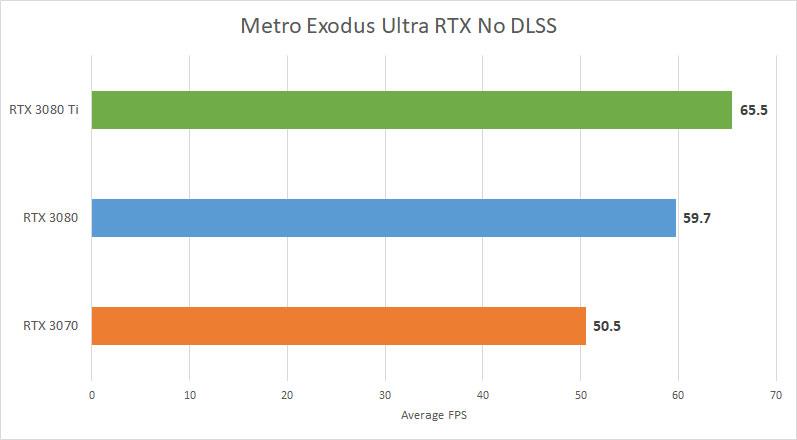 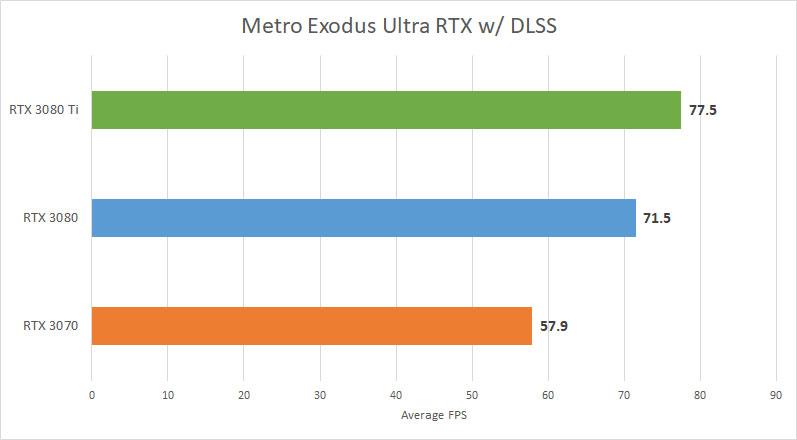 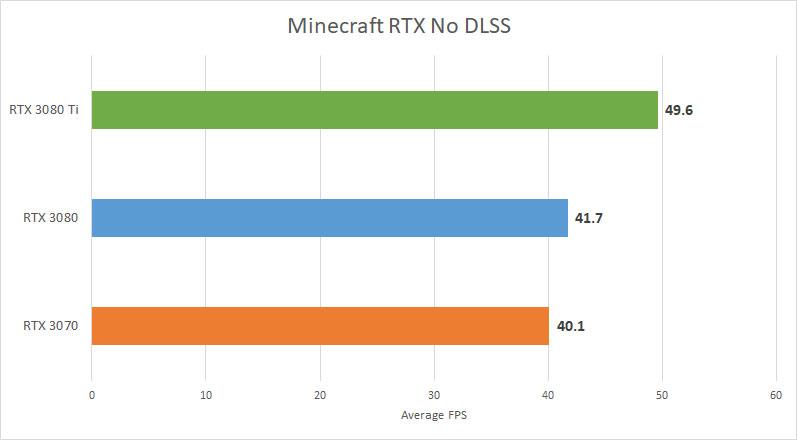 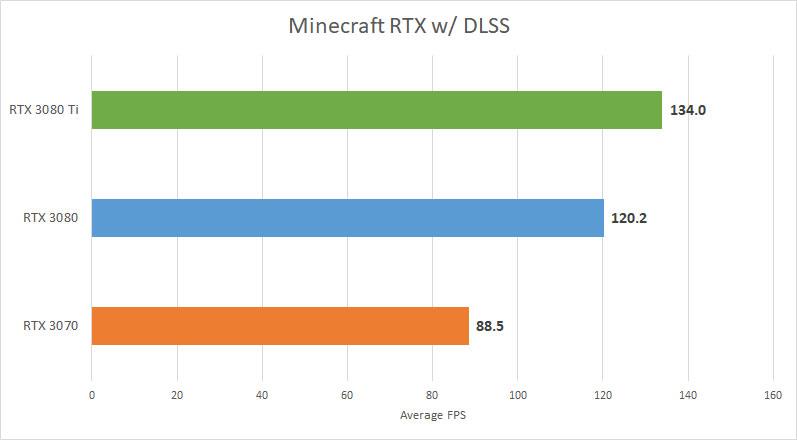 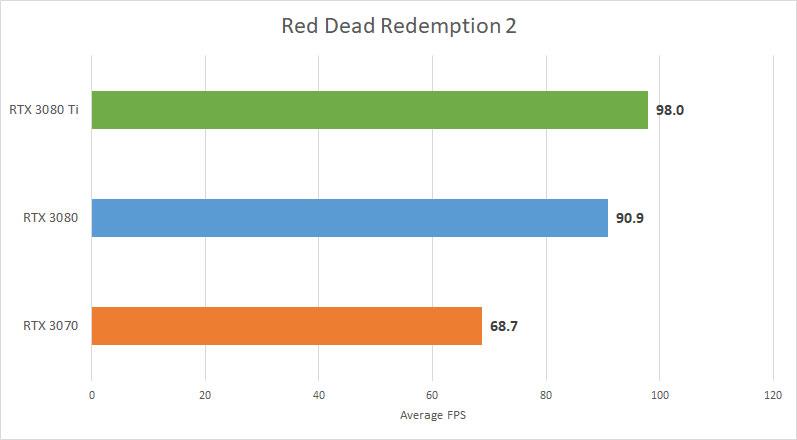 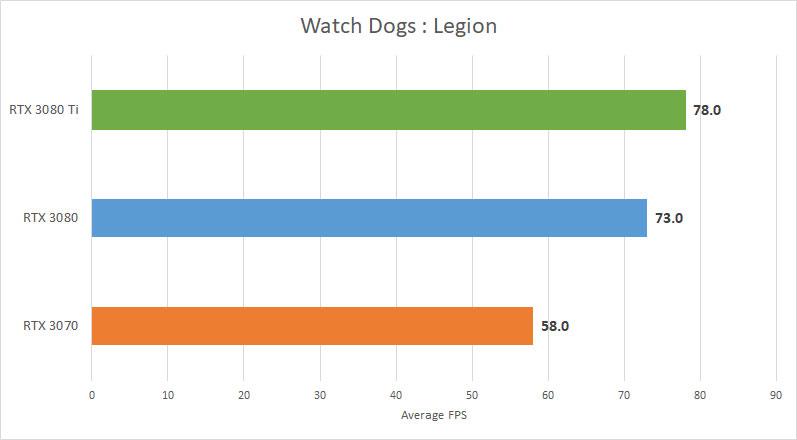 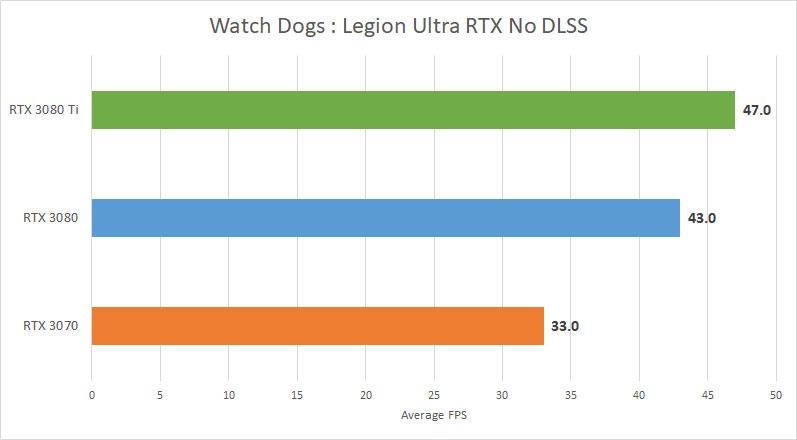 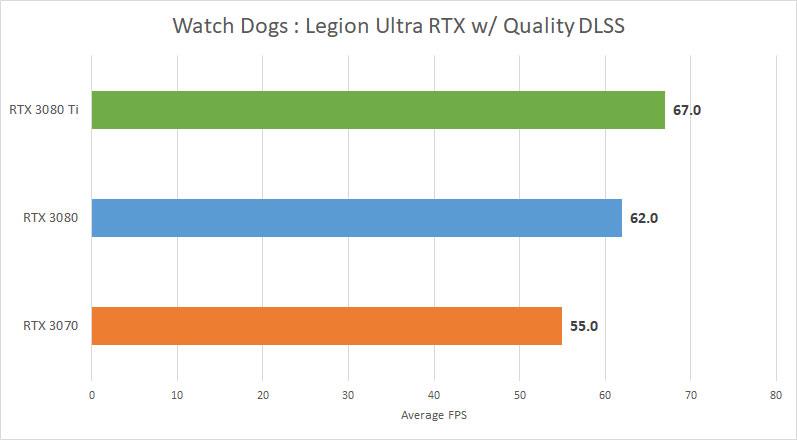 The GeForce RTX 3080 Ti tops the incredible RTX 3080 and while I don’t have the RTX 3090, it looks like it’s close to that card as well when I compare my results to other outlets' tests. That means it’s coming close to a $1399 card. There really isn’t much of a reason not to enable RTX features in games and use NVIDIA’s DLSS to get the performance boost to deliver not only better image quality with improved lighting and shadows in some games but to get close to and sometimes faster performance than straight rasterization. I was seeing increases from 5% up to almost 10% over the RTX 3080.

For VR, I decided to use OpenVR Benchmark from the developer of  the VR Minecraft like game, cyubeVR. It flies through a scene that has a lot of geometry in it to measure the performance of the card and headset. For the test, I used a Valve Index which has a resolution of 1440x1600 per eye, which nowadays isn’t the most demanding headset out there. Rendered resolution was set at 100% and the headset was running at 120Hz. 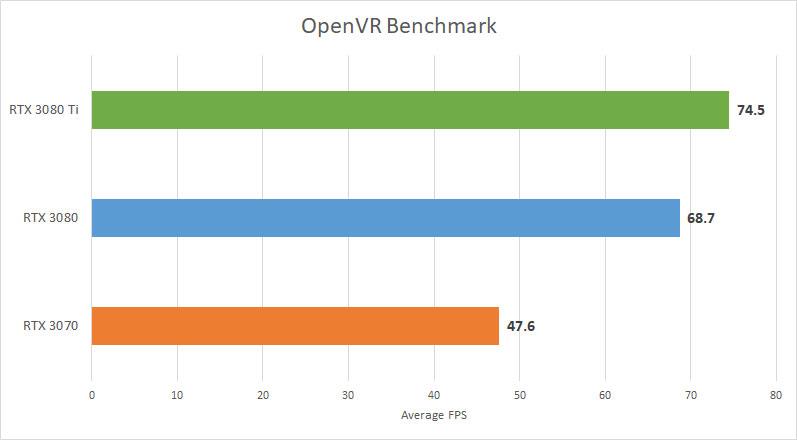 And if you’re a VR gamer like I am, you can see a nice performance uplift over the GeForce RTX 3080 although we only have a single benchmark currently to validate this. Hopefully, more and more VR games come out with a benchmark but from watching the performance graph, the 3080 Ti does deliver a more consistent performance. With higher fidelity headsets like the HTC VIVE Pro 2 demanding better GPU power to drive those higher resolution displays, a card like the GeForce RTX 3080 Ti would certainly offer a better VR gaming experience.

With the dual slot cooler, I wanted to see how hot the card would run in “normal usage” I ran the Unity Heaven benchmark for a good half hour before measuring the temperature of the card in five spots: front intake fan, front exposed heatsink on the other half of the card from the fan, top heatsink area, back plate where the logo is, and back pull fan. I moved my IR thermometer around those areas until I got the highest recorded temperature, which I’ve put in the graph below. Here’s the results with all temperatures in Fahrenheit:

As expected, the RTX 3080 Ti’s temperatures are higher during usage. I didn’t take apart the card to really see if they did a good job with the thermal pads. When running, I did find the fan noise to be quiet and definitely not as annoying as the GeForce RTX 2080 Ti. Even on load, the noise was certainly not noticeable by me and I have no complaints whatsoever when gaming with it.

I’m not a crypto miner but I do understand NVIDIA has tried to limit the performance of crypto mining with this card. Whether this will curb purchasers of this product looking to make a buck off of it remains to be seen, but I’m hopeful that we see more of the GeForce RTX 3080 Ti’s in the hands of gamers than crypto miners. I’ll leave it to the experts in this field to test out the mining capabilities of this card, but we here are only interested in providing information on the gaming aspect of this card. The reason NVIDIA didn’t designate this card as a LHR card is that they are only using that when there are different variations of the same SKU already in production such as the RTX 3080 and RTX 3070 to name a few.

And the other elephant in the room is availability. Unfortunately, this card probably won’t be easy to get, but maybe the diminished crypto performance will allow more gamers a chance to pick this one up. This card truly performs amazingly and I hope that consumers will have a chance to get one to use in their gaming system. 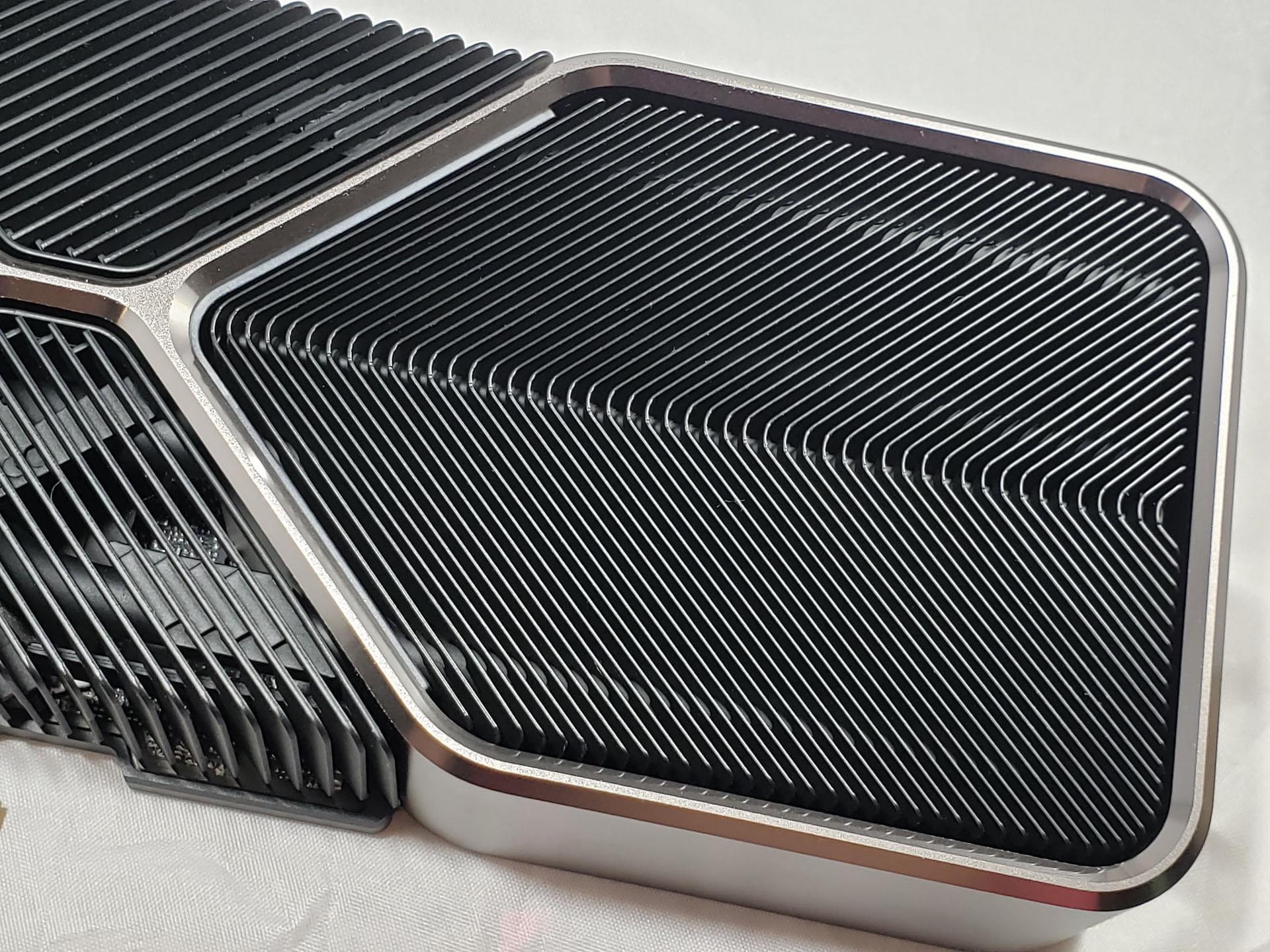 As for who this card is for, well, it’s a huge upgrade for those on a 20 series card. If you have a RTX 3080 card, this is definitely not for you as you have a highly performant card already and the performance increase over that card is certainly not worth the added overhead cost of a RTX 3080 at MSRP.

The current climate of chip shortage and demand for GPUs makes this decision by NVIDIA from a business perspective understandable. Hopefully, we get past this chip shortage and incredibly high GPU demand soon, but for now it’s the reality of the current situation.

Final word, if this was a normal GPU situation, the NVIDIA GeForce RTX 3080 Ti would be the card to get if you wanted the top of the line gaming card and had the money to spend. Performance is top notch in rasterization, ray tracing, and VR. It keeps the two slot cooling solution of the RTX 3080 with performance close to the RTX 3090 but keeps that card’s power requirements. While more expensive than I feel like it should be, it does dole out the speed that will make all current games and future games perform incredibly well. The increase in RAM over the RTX 3080, while only 2GB, should make those wanting more RAM in their flagship card happy. It doesn’t match the 16GB that AMD cards provide in their top of the line cards, but at 4K I don’t think you’ll run into any memory issues for now or in the foreseeable future. Also, it is using GDDR6X memory versus GDDR6, which is faster and costs more.

This launch is going to probably end up like the other recent launches from NVIDIA and their competitors where both the FE and AIB cards will be incredibly hard to find at MSRP pricing. Until the climate gets better, we’ll have to deal with high pricing of scalpers and little to no stock in stores.

The GeForce RTX 3080 Ti has plenty of power but it's a tad expensive when compared to how much of a performance boost you get over a GeForce RTX 3080. If you want something plenty fast for gaming, this is it. Now it's just a matter of finding it in stock to purchase one.