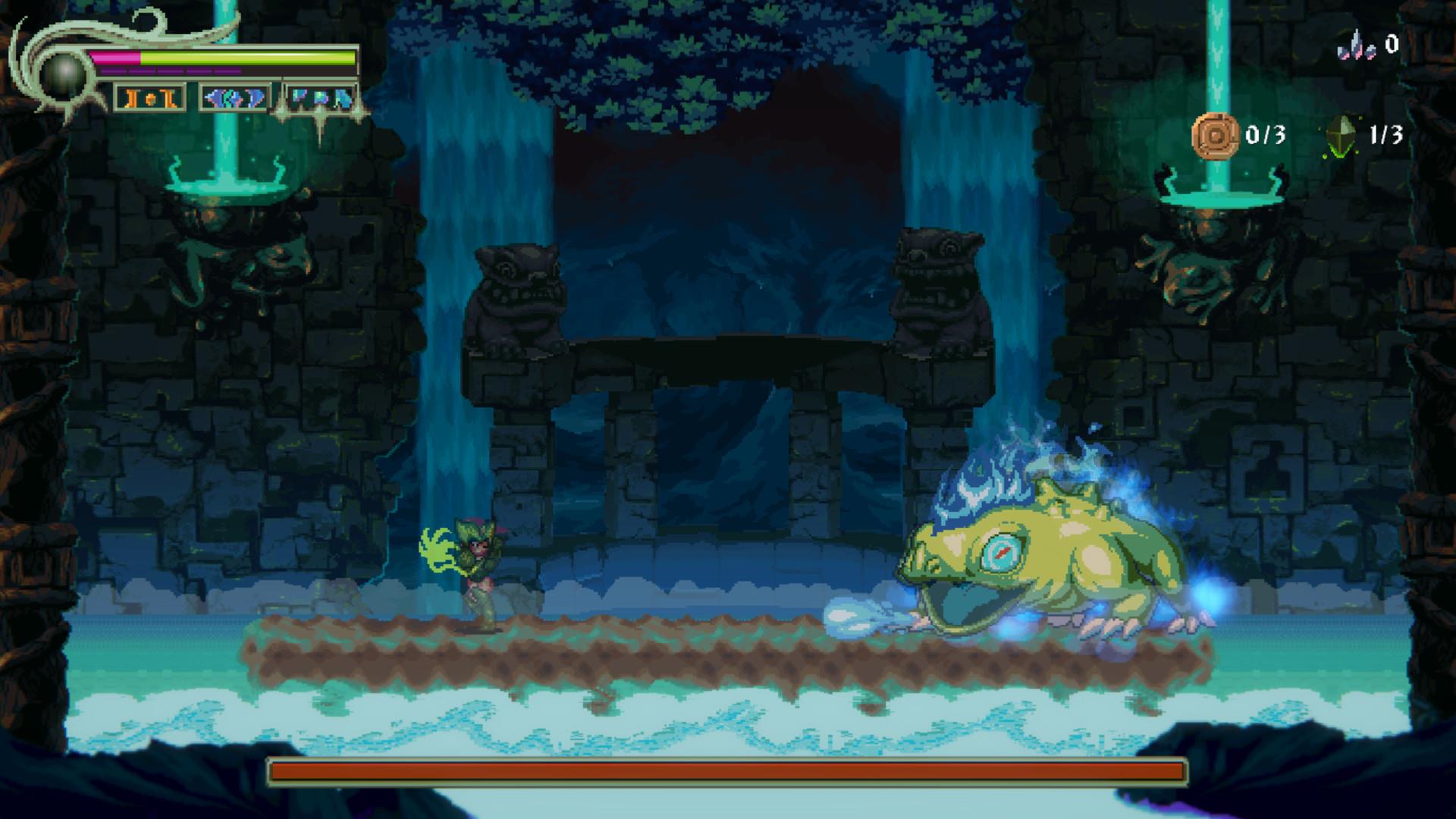 Back in late 1990/early 1991, Enix published ActRaiser on the Super NES. The game was pretty interesting as it combined side-scrolling stages with city-building stages. While other games may have attempted the same thing since then, ActRaiser was the first thing that came to mind when I read about Smelter. Typically I’m pretty terrible at anything that deals with elements of real-time strategy or city- and world-building, but if the side-scrolling areas are fun I’ll do my best to learn them and who knows? Maybe the game will be fun all around.

Everyone knows the story of Adam and Eve, right? Adam and Eve find the forbidden fruit, Adam eats it, a huge explosion happens, Eve falls into a long dark pit, and finds a being known as Smelter who can attach himself to Eve to form some sort of armor and basically turn Eve into Samus from Metroid. Yeah, that sounds about right. Anyway, Smelter has his own priorities but promises that if Eve helps him then he’d help Eve find Adam. After Smelter attaches to Eve he gives her some new abilities depending on which element is currently selected. 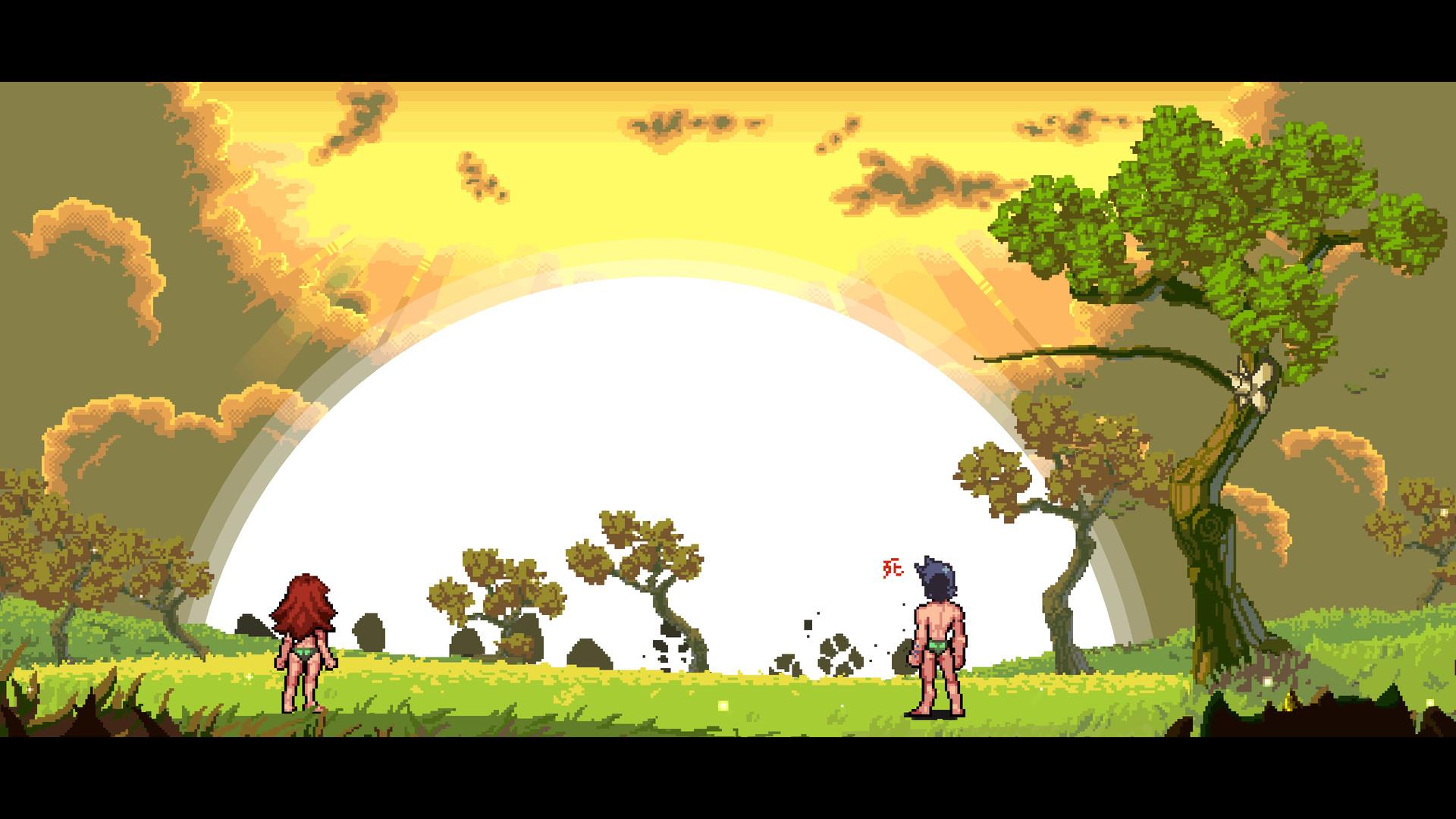 Only one element is available at first but more open up as you progress. Each element has its own basic attack and you’ll unlock new abilities as you work through the game such as a double jump, phasing through barriers, and generating stone armor to keep you weighted to the ground and provide additional defense. You can also use Smelter to “smelt” things, but outside of story elements he’s typically used to activate checkpoints and grab ropes or bars to pull you along. Attacking enemies will fill up a pink orb that, once full, you can activate an attack that sees Smelter defeat or damage all enemies within a short range.

Once you get out of the opening area you get to learn how the overhead sections work. Smelter can fly around with Eve in these areas and your basic task is to start building back his empire. This is done in a kind of simplified RTS style where you need to use a currency called Hellium to build four types of buildings: houses to have a home for Zirms (Smelters minions, so to speak), Orcharion Shrines to increase your apple supply, and Zirm Barracks and Outposts to defend against oncoming enemies that will appear from time to time (Smelter can also attack the enemies himself). The three latter buildings can accommodate one to three Zirms depending on the structure but you need to make sure of two things: the the number of Zirms don’t outnumber the number of Zirm Houses or the number of apples. Zirms will disappear if they aren’t assigned to a structure when there’s an apple shortage or a housing shortage. It can be a bit confusing at first, but after a while of playing and experimenting with the structures it’ll start to make sense. 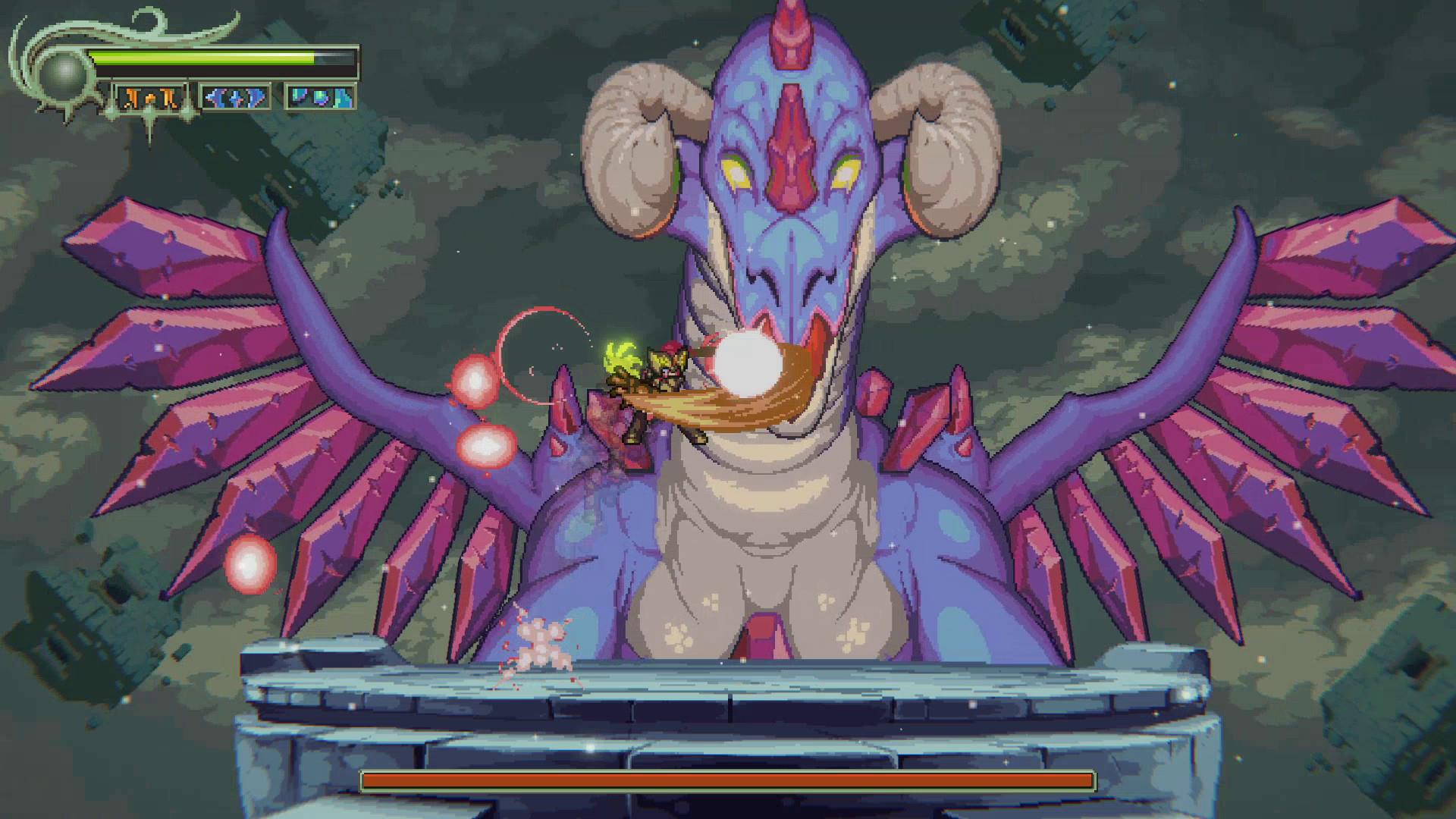 The overhead areas, called the Rumbly Lands, consist of a few sections and a few times you’ll have to play tower defense while completing an objective, such as keeping enemies from destroying some sort of structure or keeping two shrines charged up for a certain length of time. This all sounds interesting except that the overhead areas are kind of basic in terms of what you can do. Aside from assigning Zirms to your structures you have no control over what they do. If enemies approach the Zirms at your barracks or outposts, they will begin to move in and attack them. If your structures start to take too much damage you can repair them with a single press of a button when moving over top of it. Even the structures are placed on a grid-like pattern so the only real strategy is to place your houses and Orcharion Shrines back out of the way and your barracks and outposts up front, then just make sure they’re populated and you have enough apples to satisfy the Zirms and you’re set. There’s not really much to it. Even if you fail an objective during enemy attacks, there aren't really any major setbacks. While I’m not a huge RTS fan I can appreciate how simple these segments can be, but even then I really couldn’t get into them all that much.

The side-scrolling segments, on the other hand, were the complete opposite; I enjoyed the heck out of them. The controls are pretty tight for the most part and the challenge does steadily increase as you progress through the game. When you enter the first area in each section of the Rumbly Lands you’ll come to a forge not too far in that unlocks a new set of abilities. After making some progress you can swap freely between sets of abilities. 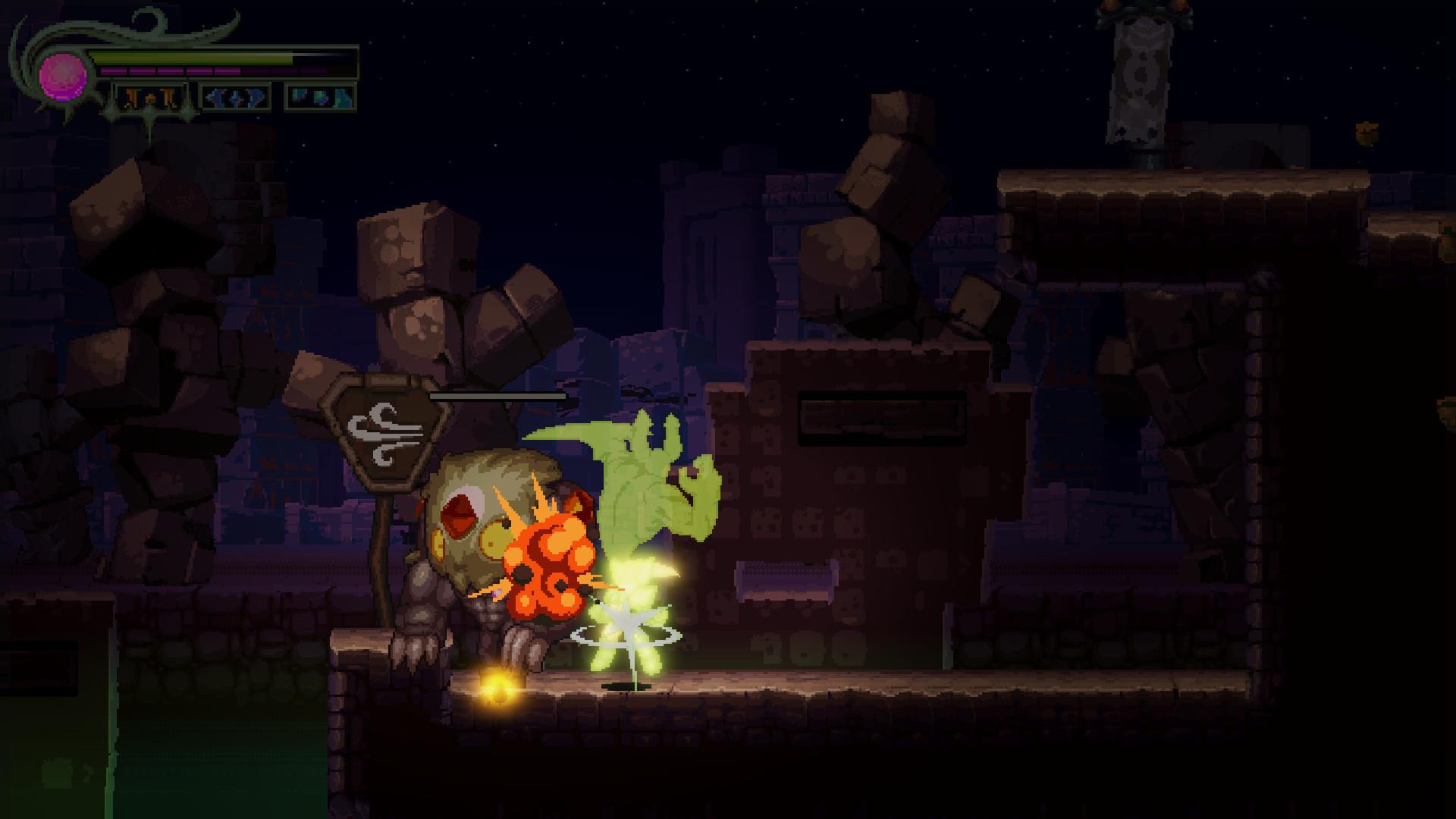 I mentioned the abilities already and mostly they all feel pretty good to use, though climbing walls may take a bit of getting used to if you’re familiar with other games that let you do this, such as Mega Man X. For me it felt a bit different in how the climbing works but it didn’t take much for me to adapt. Each area has a few different areas that kind of branch off where you can find either Apple Cores to help your apple supply or Trials that test your skills and reward you with a Trials Token afterwards. The Trials typically consist of short areas where you have to complete a task such as not getting spotted by enemies or not taking damage. You can spend the tokens at forges in the Rumbly Lands to give you new abilities to use in the side-scrolling stages. Once you’ve visited a Trial you can access it from the Rumbly Lands at any time, so you don’t have to go back into the stage it was located in and find it again.

Smelter kind of gives me mixed feelings. I did enjoy the game with the graphics and music being great and the challenge overall being pretty good. The RTS sections, though, kind of felt…there. I’m not saying they’re bad by any means; if you’ve never or rarely played an RTS game it’s a pretty simplified introduction of sorts and it does the job nicely in that regard. They do progress the story of Smelter trying to rebuild his empire. But without any real consequences for failing objectives it just seemed like a bit of a stop gap between the platforming areas. 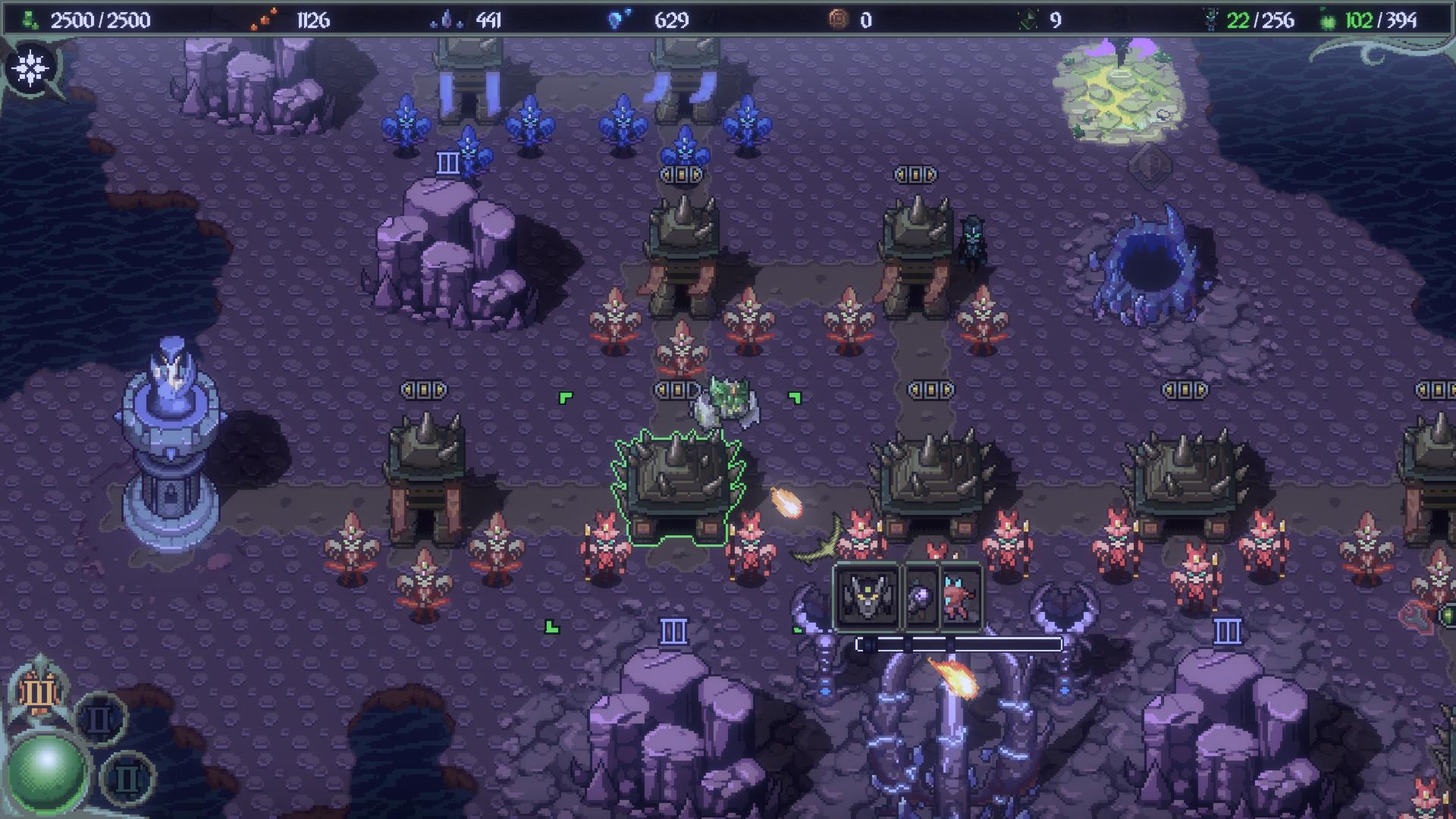 I’m absolutely terrible at RTSs and have no sense of strategy on where to place things and send units to, and while having that sense of strategy can help speed things up or make things easier, as long as I had a few barracks and outposts to defend against enemies, and houses and Orcharion Shrines to keep the Zirms fed and housed, it was only a matter of time before I was able to complete an objective and move onto the next platforming area. Again I’m not saying they’re bad. For what we’re given they were pretty decent. I think if you were required to employ a bit more strategy on where to place things and have actual consequences for your actions other than taking a few extra moments to repair a shrine or something to continue the objective, that might have gotten me more into them.

Overall Smelter is enjoyable, depending on your taste in games and difficulty. The beginning can be pretty easy, including the Trials which do a good job of testing your skills. The difficulty does ramp up as you progress. I’ve seen people say that it can ramp up too much and the game gets pretty difficult towards the end. I’m okay with that as I enjoy games that get more and more difficult towards the end with the final areas being especially challenging, putting all of your skills to the ultimate test. However, I am definitely more of a fan of the platforming than the RTS segments. As stated I’m okay with the RTS segments but they seemed more of a stop gap between platforming stages to help progress the story of Smelter and his empire. If you’re a fan of platformers with some pretty difficult challenges towards the end, Smelter is worth picking up. Even if you’re not an RTS fan it’s worth a playthrough.

Smelter is a game that's a mix of platforming and real-time strategy, though it's the platforming that shines more. The controls are tight and the challenge is pretty fair though it can ramp up quite a bit later on. Plus the Trials are a great way to test your skills and help unlock new abilities. The RTS segments aren't bad but they feel a little too simplified with no major consequences.