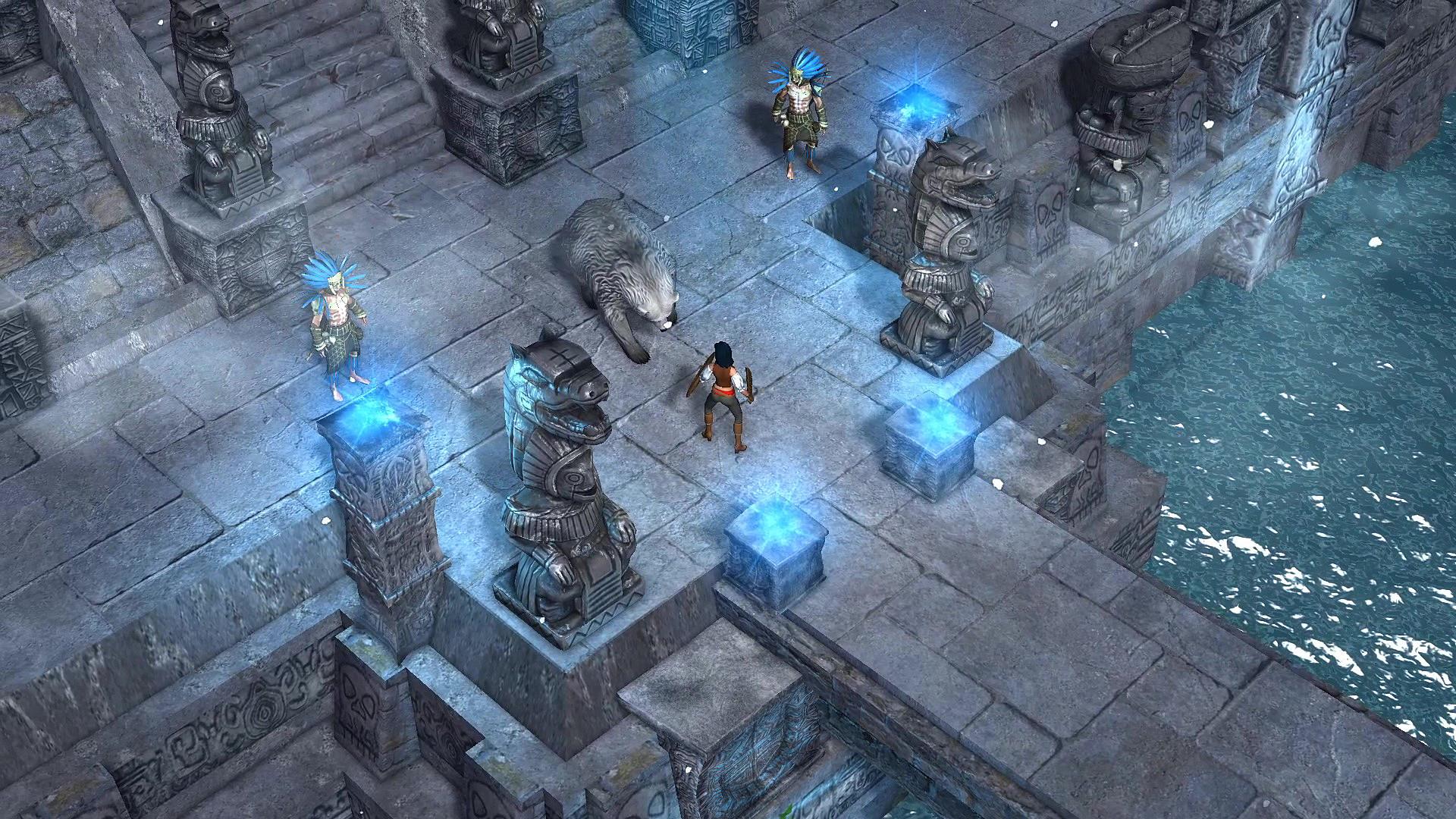 Written by Elliot Hilderbrand on 5/26/2021 for SWI
More On: Aluna: Sentinel of Shards

Our heroine is Aluna, a young woman whose conquistador father saves the Earth Goddess Pachamama. In return they have a daughter together, and now Aluna is being sent back to her roots to help aid her mother in a time of turmoil. Aluna finds herself running through jungles, caves filled with ghost pirates, seaside docks, and volcano temples to collect shards to bring power back to her mother Pachamama (who can’t be bothered to wear anything other than vines.) All the staples of the genre are represented; looting, leveling, piles of baddies to mow down with a magic spell. Aluna doesn’t bring anything distinctive, but it doesn’t do a disservice to the genre either.

The story is simple one; find the stolen and missing shards, heal the earth mother Pachamama, who also happens to be to your actual mother, and defeat the ultimate evil, that sort of mess. The story isn’t gripping, but the cutscenes are. Every now and then you get to watch a cutscene played out in the style of a comic. They look great, and it's a letdown that the developers didn’t include more of them, instead choosing to go with in game engine cutscenes. 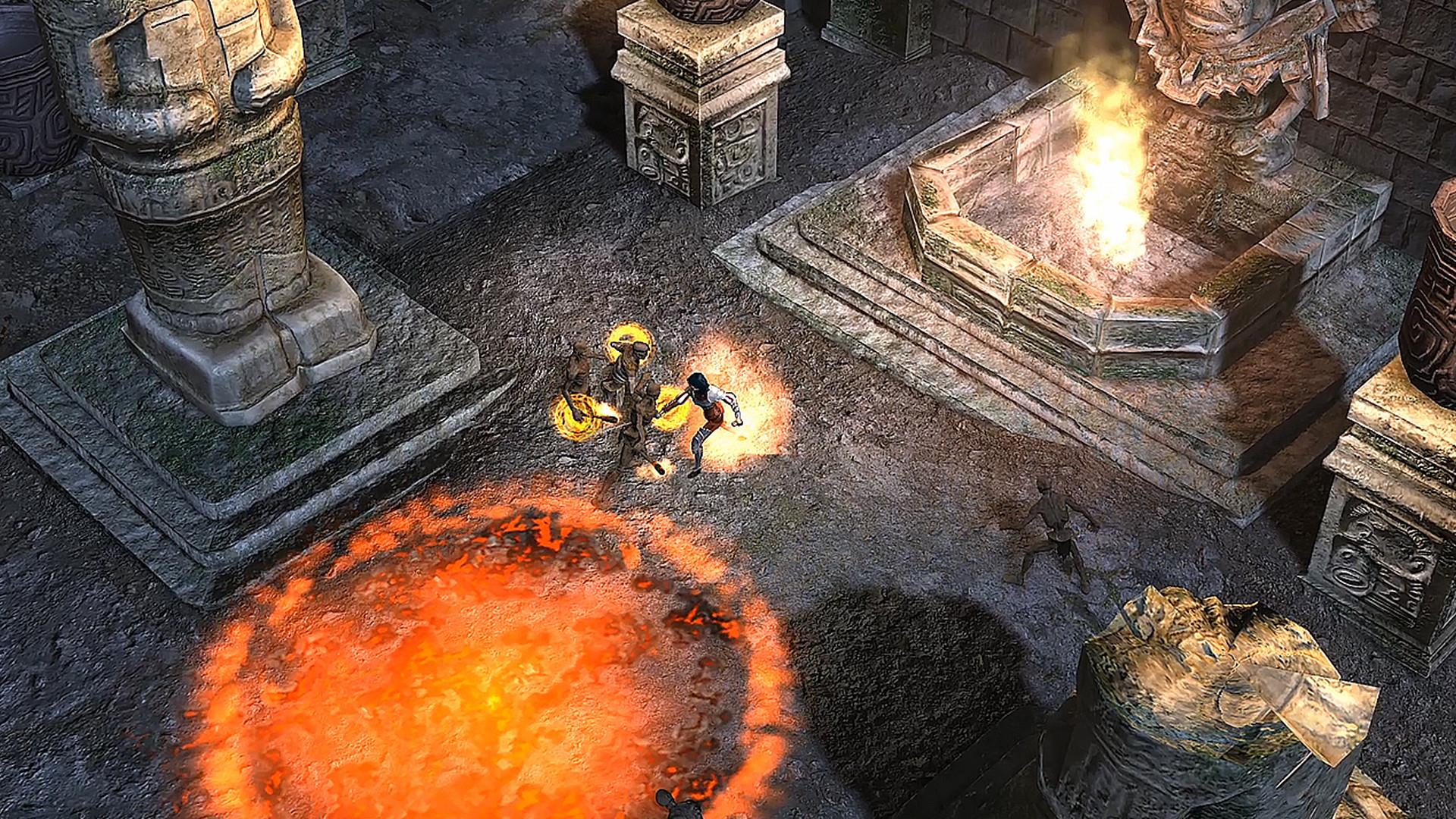 Aluna: Sentinel of the Shards is a practice in variety. It is the spice of life after all. And here it comes in all shapes and sizes, from the zones Aluna travels through, to the handful of different allies with whom she comes into contact, even the plethora of gear to loot (way too much gear to have to constantly loot by the way). Say what you want about Aluna: Sentinel of the Shards, but you can’t say it doesn’t provide choices.

I found it enjoyable to travel to every new zone on the map. Zones are different enough from one to the next that I was never visually bored with the area or the minions I was fighting. Thick jungles, seaside docks, or haunted caves provide enough change that I never felt like I was trudging through. Whether you are fighting Conquistadors, Aztecs, ghost pirates, or giant plants, the game provides a plethora of enemies to barrel through. While zones look unique, they are very straightforward. There is presumed freedom to walk around and explore the map as you see fit. But that presumption is a lie. You can go down a nook and find an extra chest, or set of baddies to mow down, but you are quickly hit with a dead end. The maps are designed to be completed one way, and that can be frustrating. Especially when the mini map tells you to head east, but the direction of the path heads west. I found myself trying to go the direction the mini map said, only to walk into wall after wall. I learned to just go down the path and eventually it will turn and head into the correct direction. 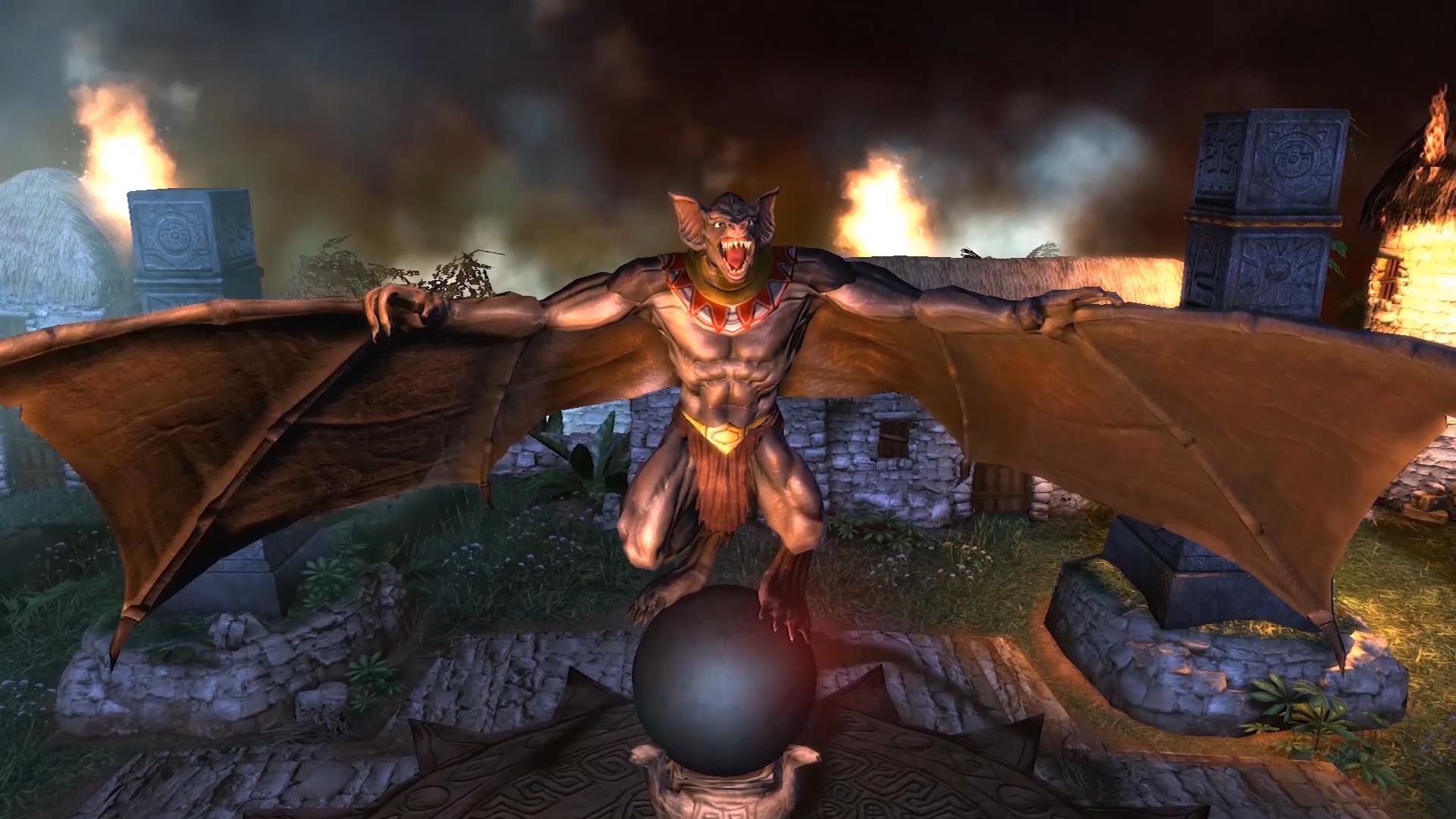 Another issue is the mini map itself. The HUD isn’t very big, and the mini map doesn’t help because of its small size.. You can’t zoom in or out of the mini map, and it will frequently appear that you can travel in one direction, but are hit with a wall, either figuratively or literally that prevents you continuing that direction. I eventually stopped relying on it altogether and if I needed help I consulted the map in the pause menu.

Aluna allows you to play the game as you see fit. There are three tech trees to choose from, melee, ranged, and magic. You can play a straight build, or mix and match. If you don’t like the build you have it doesn’t cost much gold to respec and try something else. I found myself constantly going that route to see what build worked best for my playstyle. Each tree has a handful of skills to choose from, and mapping them to almost any button I want is perfect.

The mapping of buttons is excellent, however the controls themselves are not pinpoint accurate. Telling your character to do a spin attack doesn’t mean she’ll do it right away. As your frame rate dips so does the accuracy of the controls. Even when trying to open a chest, you have to stand at the correct spot to hit the open button, and then stand in a different location a foot away to loot the items the chest just dropped. I found myself passing chests without opening them because I knew I was nearing the end of a zone and just wanted to move on. 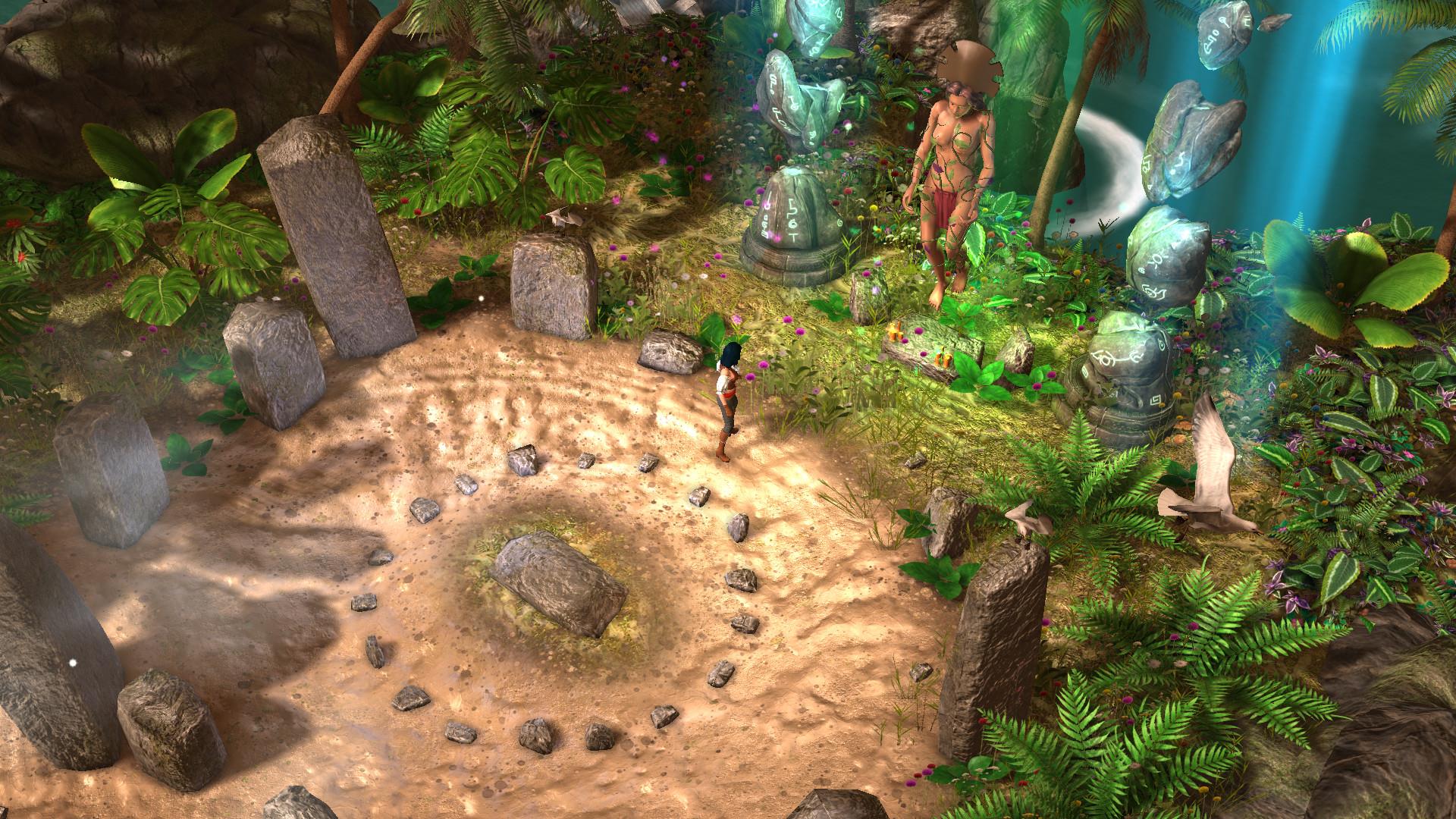 The loot system in Aluna: Sentinel of the Shards is basic. As you down enemies some of them will drop loot, you grab it, and every 10-15 minutes you check to see if you’ve acquired an upgrade. As you don’t have a limit on bag space you grab everything that you can. You can also craft and upgrade items. It’s all random so you can have to get a little lucky with getting a really useful piece.

New Game Plus is one of those features that I love to see in just about any video game. If you’re not familiar, New Game Plus allows you to play through a game a second time, but you get to keep all the items, gold, and experience you’ve acquired. Regardless of all the stuff you bring in, New Game Plus fashions the game in a way that is more challenging than the first time through. Aluna: Sentinel of the Shards includes this mode, and that alone can double your play time. Going through a second time was faster, maps were easier to get through when you know to just follow the road set out for you, but I still found myself having a good time as long as my frame rate didn’t dip too much.

The biggest challenge I had enjoying this game was the frame rate. When it comes to frame rate I am not one of those, “4K or nothing, 60 fps or it’s garbage” people (I mean the human eye can only see 30 fps anyway right?- I kid, I kid) I find that I rarely have an issue enjoying a game because of the frame rate. Having said all of that, Aluna struggles even when playing with the Switch docked, and it is very noticeable. Like most games of this genre, combat can get intense quickly. Combat is the key focus of Aluna, and when things get hot and heavy the game becomes almost unplayable. I can cast a spell, and not know if it actually went off. I see no casting animation, or I don’t see the spell until three or four seconds after I wanted it to go off. There was one zone, towards the end of the game, that I had to literally stop playing and take a break. It was the only zone I disliked; it was super confusing, with so many enemies that if I made the wrong turn I would have to engage in standstill combat. 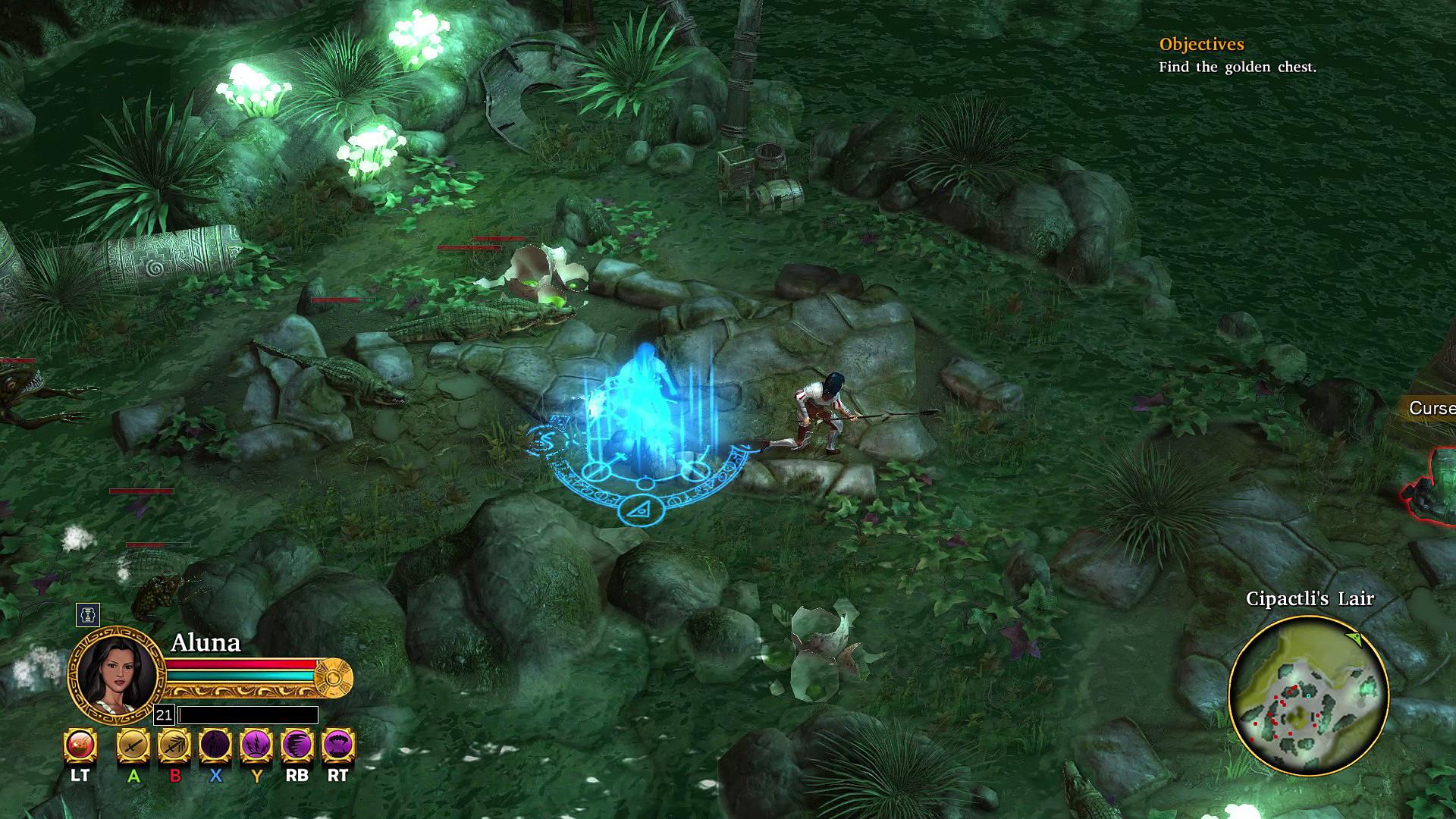 I also experienced several game crashing errors. The three that I had all came at random times, like talking to a merchant, or opening a chest. Luckily the in game saving happens enough that I didn’t have to replay much to get caught up.

There were a couple of times I found the game to do something that literally made me laugh out loud, which I don’t think was the intention. In the beginning you rescue your starting town from attack, and you frequently go back there to sell items and buy upgrades. But the corpses of the enemies you slay are still there just laying around in the town, like it’s no big deal.

I had fun with my time spent playing Aluna: Sentinel of the Shards, the comic book style cutscenes drew me in, and the systems were easy to master, because all the systems, crafting and leveling are simple. The only times I didn’t enjoy myself were always due to the frame rate, or a game crashing error, which do happen. With the New Game Plus mode I found myself playing through again just so I could max out some stats. For the reasonable price, there is plenty of entertainment to be had. If the frame rate issue could be addressed Aluna: Sentinel of the Shards would easily become my portable dungeon crawler on car rides.

Simply put, Aluna: Sentinel of the Shards is your typical action adventure RPG. Zones are fun and unique enough to satisfy. But the frame rate dips so low at times that it’s easy to become frustrated. There’s nothing eccentric here, and that’s ok. Not every game about saving the world has to be, I guess.