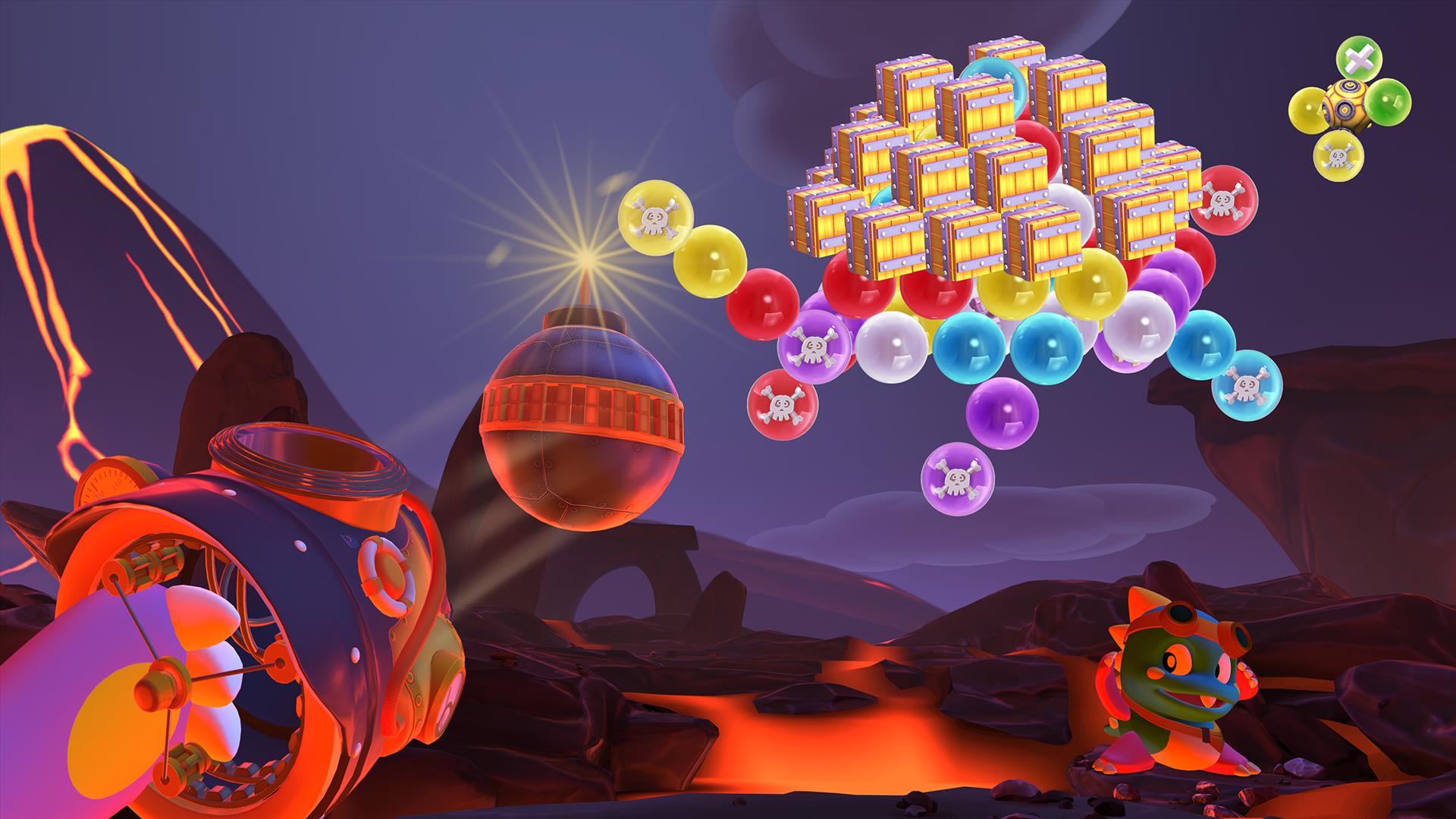 I remember waking up back in the day, rising from bed hours before work to sit on the sofa in my dingy apartment just so I could Bust-A-Move on the first PlayStation for a couple of hours before I had to leave for my shift. I was utterly entranced by the game’s mechanics, which asked players to shoot colored bubbles at an ever-descending rainbow wall, matching up bubble colors and lighting off chain reactions.

The simplicity of Bust-A-Move absolutely appealed to the deepest recesses of my lizard brain, the same part of my psyche that liked to zone out to games like Dr. Mario and Yoshi’s Cookie. I didn’t need a ton of complexity in the game, I just needed those bubbles to keep coming. I played Bust-A-Move so much that I sometimes made myself late to work.

Flash forward about 25 years, and here I am in the brilliant future. I’m seated a desk in my bedroom, where I work from home. It is 6 a.m. A Quest 2 VR headset is strapped onto my head, and I’m hovering in a beautiful, brilliant tropical paradise. I sit back in my chair and shoot colored bubbles at an ever-rising array of intricate rainbow structures, matching up colors and setting off chain reactions. I play for so long that I lose track of time, failing to stop in time to start work for the day. 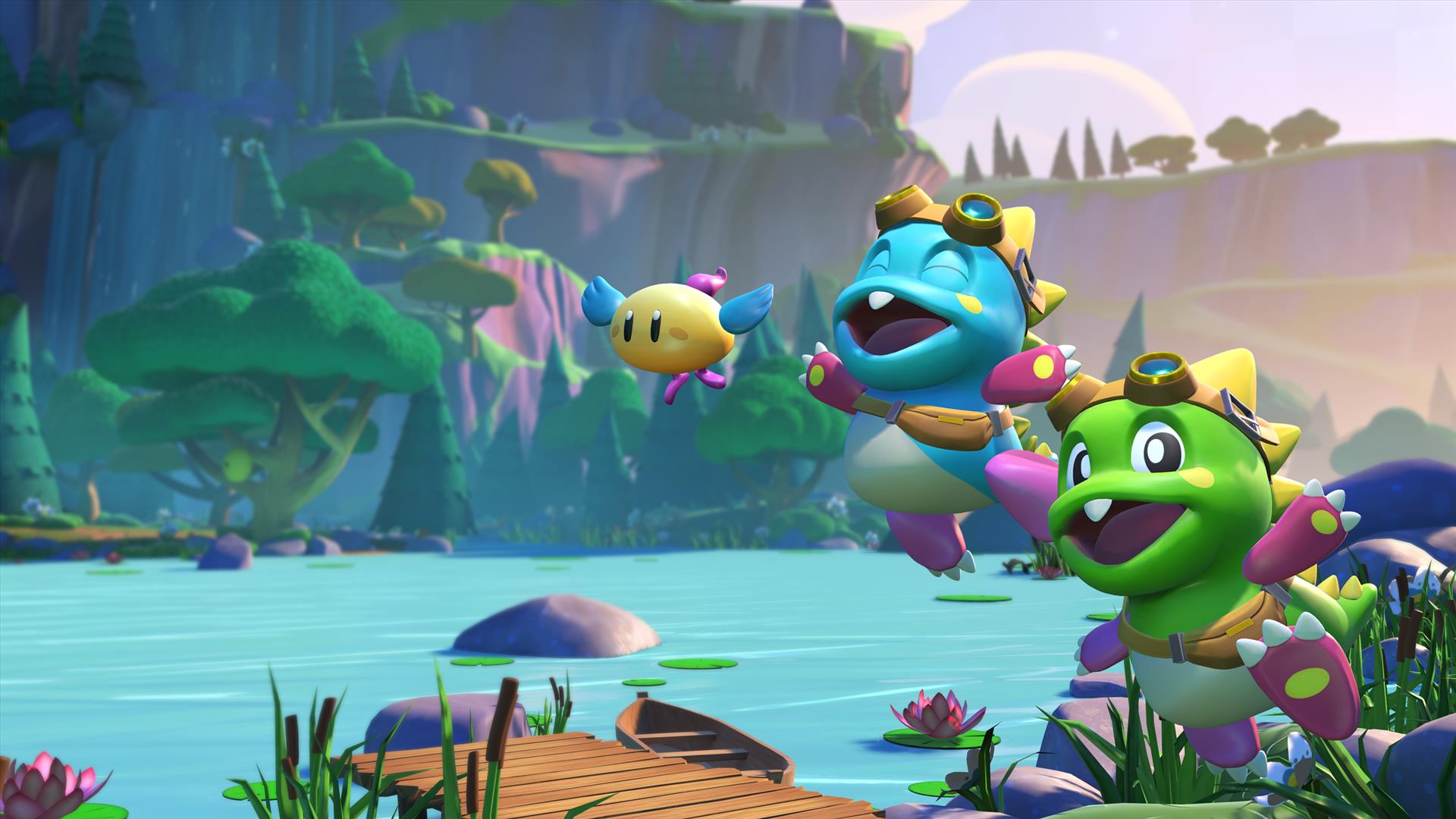 A lot has changed. Bust-A-Move was eventually renamed Puzzle Bobble. Video games can now be played in full 3D, with the player smack dab in the middle of the action. But here I still sit, popping bubbles and swearing softly to myself when I miss shots. This is more or less the same game I’ve always loved.

Puzzle Bobble VR: Vacation Odyssey was developed exclusively for Oculus Quest by VR-champ development house Survios in cooperation with O.G. Puzzle Bobble originators Taito Corporation (which is now a wholly owned subsidiary of Square Enix). Both companies’ fingerprints are all over this thing. Survios brings the VR expertise, ensuring a smooth, optimized experience. And Taito brings the devious puzzles that the series is long known for.

The big question is, did these two companies manage to convert the addictive and fun gameplay of the Puzzle Bobble franchise to VR? And the answer is yes, they totally nailed it. Everything you expect from a Puzzle Bobble game is here: the bright, cheery backgrounds, the bouncy music, and Bub the dino-lizard-mascot thing are all accounted for. And the 100+ puzzles included in the game? Spectacular. 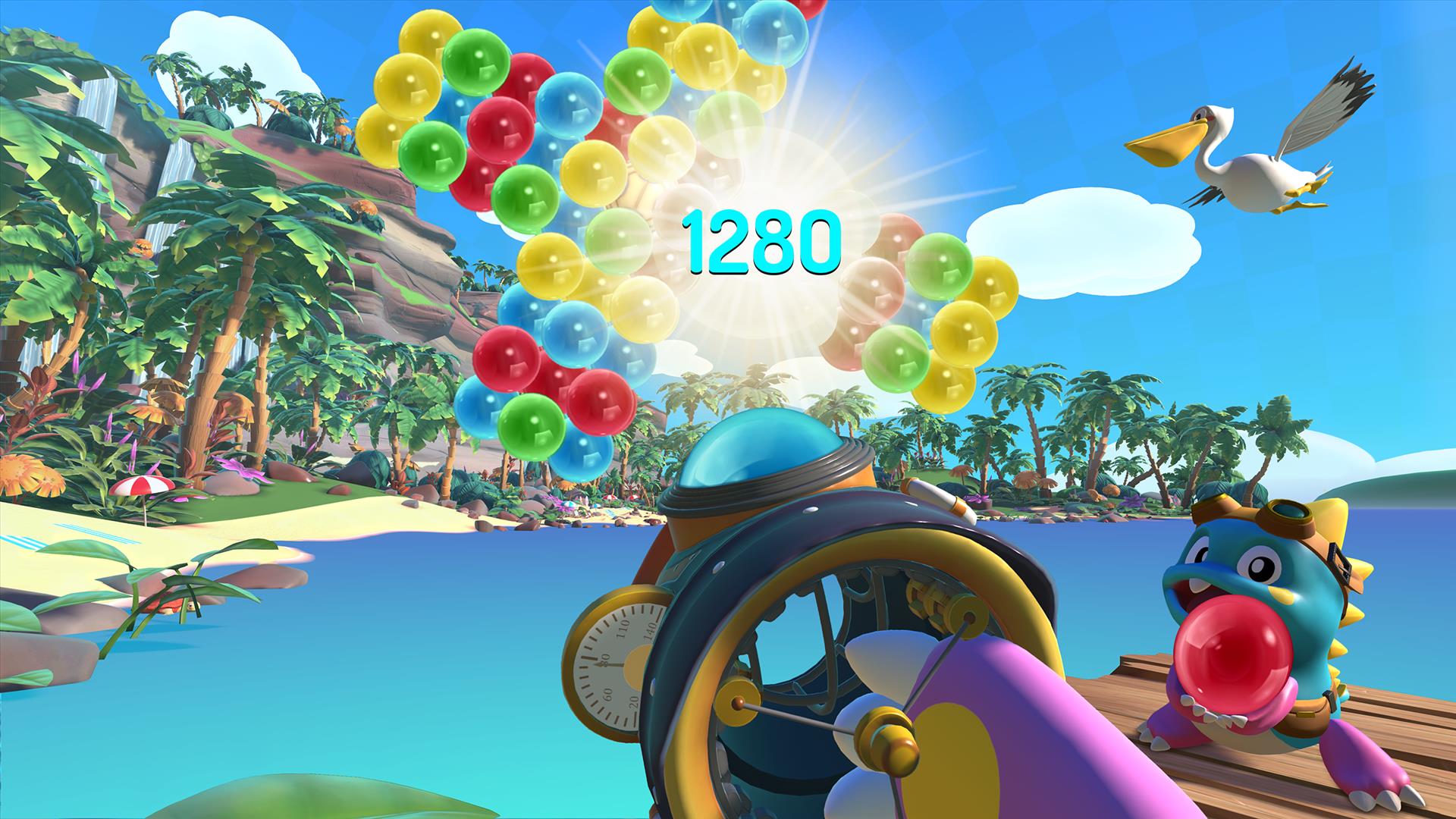 Things start out innocuously enough. A simple geometric shape floats in the air, made entirely out of brightly colored bubbles. Players start out with a slingshot in their off-hand and a specific number of colored bubbles at their disposal. With their dominant hand, they pull back on a cord, which allows them to aim and shoot a bubble at the construct. Pull back farther, and the bubble will launch faster and fly further. If the player manages to match three bubbles of a kind, those bubbles burst, and the entire construct spins with the momentum caused by the breakage. Once all the bubbles have burst, the player takes one final shot at the core of the puzzle, completing the level before moving on to the next.

But the next level is a little bigger, and maybe has an additional color or two. And then the next puzzle is even bigger, and more deviously complex, with layers of bubbles within layers of bubbles. And then puzzles begin moving, sliding back and forth across the field of play, forcing players to aim faster and shoot harder. And what’s this? Are there two puzzles on this level? Three? I don’t want to spoil some of the later complications the game throws at players, but suffice to say that the escalation continues. 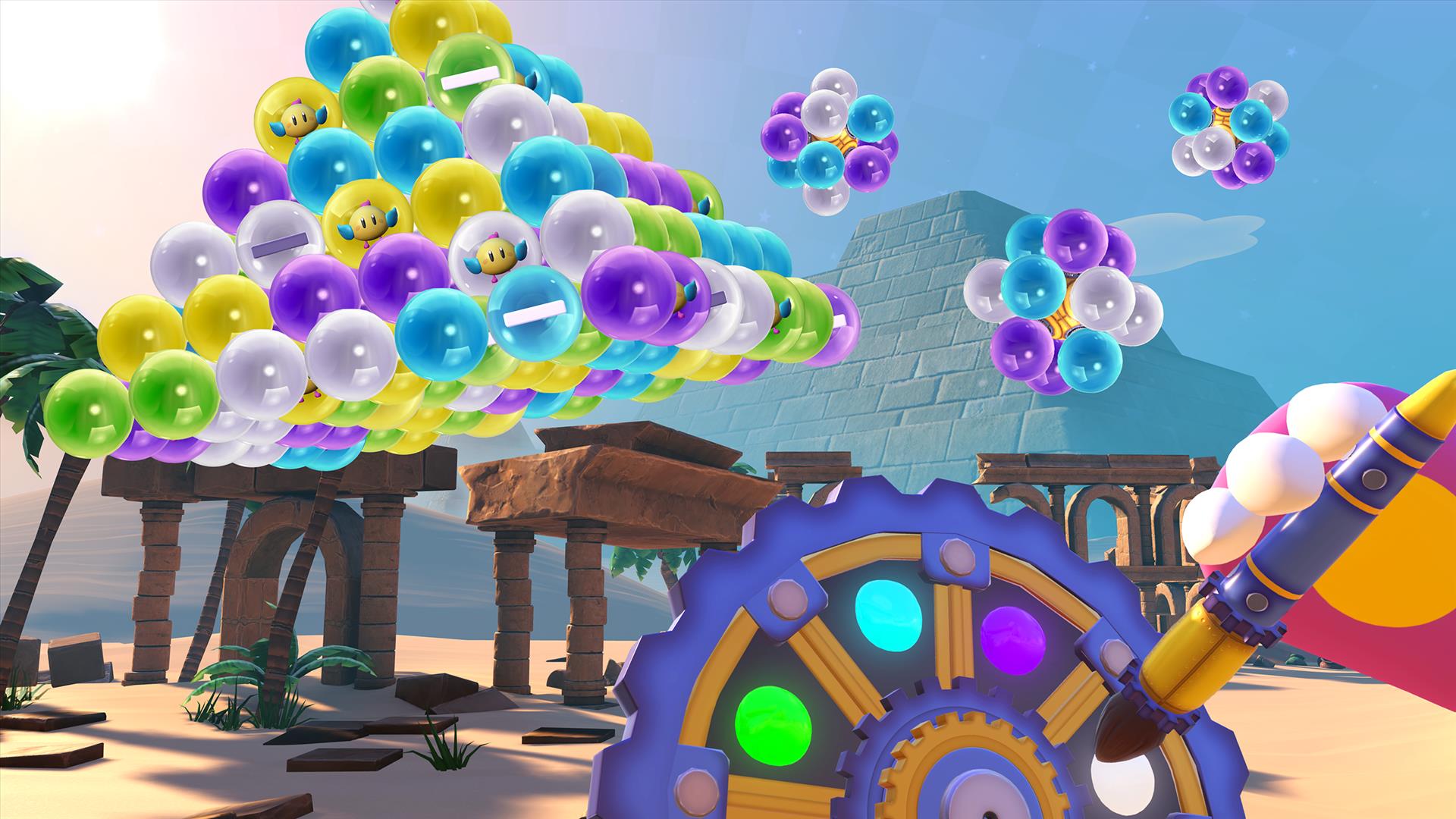 Before long, Puzzle Bobble VR ceases to be relaxing and becomes challenging. Timers come into the mix, forcing the player to quickly assess the situation and start launching carefully placed shots, trying to undo the inner connective tissue of overwhelmingly large structures. Well-placed shots decimate entire wings of intricate bubble structures, causing a little cheer to go up from an invisible crowd. You know. Puzzle Bobble.

The completion of each puzzle awards the player with a star rating, and a small number of coins. Coins eventually accumulate to the point where you can start buying a few power-ups, stuff like bomb shots, and a paintbrush you can use to change the color of your next bubble. You also have the option to switch bubbles with Bub, who is standing nearby, constantly feeding you your next shot. The power-ups are fun, but I mostly ignored them in my quest to jam through every puzzle in the game, regardless of score. I’ll go back and try to get some more stars eventually, but for my first run I was constantly compelled to push forward to see the next ridiculous bubble-architecture nightmare the game was going to push on me. The fun thing about Puzzle Bobble in VR is the scale; some of these things are enormous. 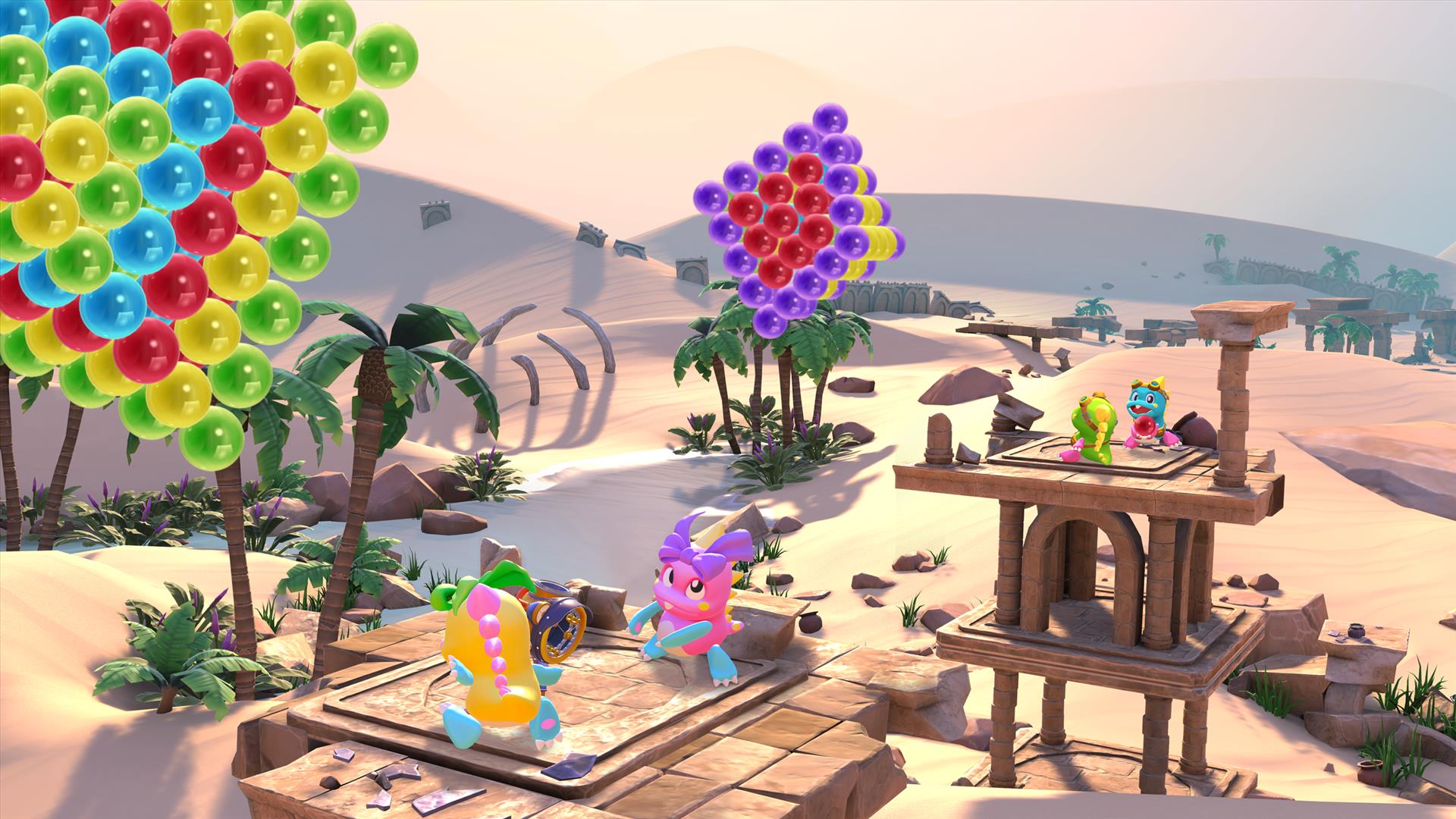 I would recommend completing the story mode before heading into Endless mode, where multiple puzzles appear at once, constantly floating upwards towards a mysterious black hole in the sky, challenging the player to pop them all before they get sucked away. You are going to need to build your skills to have any success with that one; it is tough when you are a newcomer, and I found myself failing far more quickly than I expected. A third mode allows players to compete with friends, but this being a pre-release review period, I could not find anyone to play with. No worries on my end, I am not a super competitive type. I much prefer my bubble popping to be solitary.

The only real difficulty I had with the game concerned the sensitivity of the aiming mechanic. A line extends from your slingshot to the puzzle, and you can clearly see where your intended shot will land (if you move quickly enough, that is). My hands tend to shake ever so slightly, which causes the targeted destination to flip out a little bit. It’s not a big deal (and it’s primarily my own fault), but it is something to keep in mind for prospective players. There is a level of physicality when Playing Puzzle Bobble in VR that isn’t present when aiming an arrow with a joystick.

But beyond my shaky hands, I have had a great time with Puzzle Bobble VR. It is pretty much everything you want, and everything you expect it to be. Puzzle Bobble VR: Vacation Odyssey doesn’t offer any surprises, but it does deliver the same solid gameplay fans expect, translated very successfully into the virtual arena. If you loved Puzzle Bobble in the past, you will still love it now.

Puzzle Bobble VR: Vacation Odyssey translates the franchise's beloved gameplay successfully into the VR space. With a ton of devious puzzles and a few different modes to play around with, there is plenty of content here to keep bubble poppers busy for a while. The slightly twitchy aiming can be difficult at times, but overall the game is exactly what fans might expect.