ChekhovOS – An Experiment in Gaming and Theater

When I was seventeen, I traveled to Volgograd, U.S.S.R., with a school group for a month-long student exchange. While there, our little band of Americans was exposed to the best that regional Russian culture had to offer – trips to museums, the opera, and the ballet – much of which fell upon the blind, unengaged eyes of youth. A lot of what I saw in that period is fuzzy in my memory 31 years later, except for one very memorable trip to the Volgograd New Experimental Theater for a modern, alternative performance of Romeo and Juliet. The experience was absolutely wild, with thumping electronic music, utterly non-traditional costumes and scenery, and brightly colored lights sweeping across the stage and audience. Towards the end of the play, everybody on stage got naked. So yeah, I remember that one pretty well.

Since then the words “experimental theater” have held a special place in my heart. I don’t get out to the theater to see live performances as much as I would like (certainly not at all in the last 18 months), but I’m always down to experience something new and interesting. With theatrical productions, the word “experimental” can mean a lot of things to a casual theater goer like myself, but it usually signifies that I won’t be bored. I jumped at the chance to check out the first public performance of checkovOS, the new “experimental game” presented by the Arlekin Players Theater. 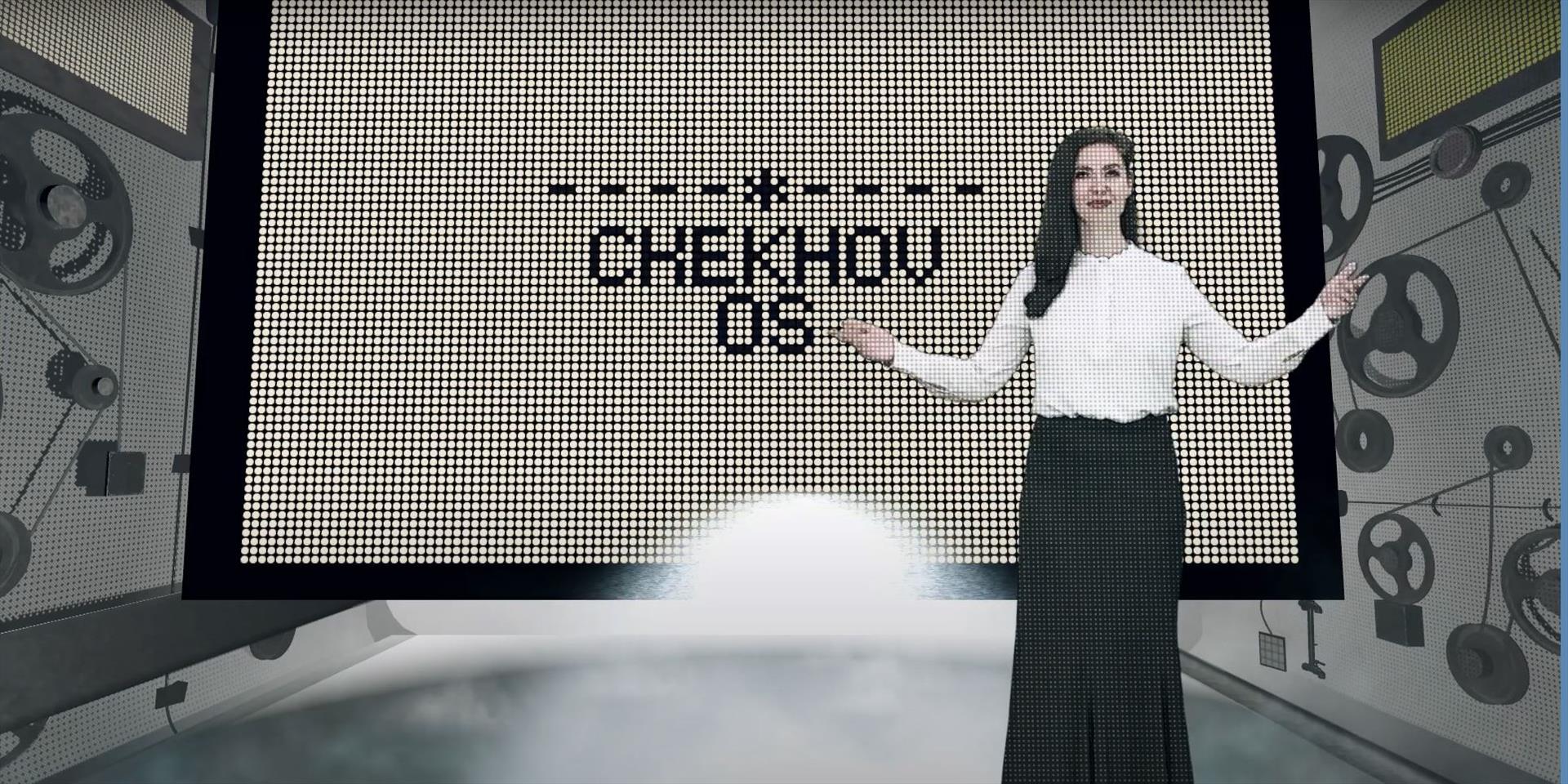 So, how experimental was chekhovOS? And why am I writing about it on a gaming website? Stick with me here, and I’ll try to break it down.

ChekhovOS is based upon the plays and writing of Anton Chekhov, one of the most revered writers of all time. While modern audiences may be less familiar with the works of Chekhov, his plays (The Seagull, Three Sisters, The Cherry Orchard, Uncle Vanya) are considered classics. Though Chekhov considered some of his plays to be comedic, to modern sensibilities they are laced with melancholic irony and an often-inevitable sense of impending tragedy. It was not terribly fun to be a character in a Chekhov play.

Which is why the characters in chekhovOS are begging to be set free. Since the late 1800s, they have been stuck in the chekhovOS, an operating system constructed by Chekhov himself, doomed to perform the same plays over and over again, suffering the same miserable fates time and again.

The entire concept of the experience is trippy and weird, blurring the lines between the performance and the audience. Even before the play begins, the Chekhov characters begin pleading with the viewer. I got an email the day before the show from “The Chekhov Characters” that included the following text:

“We beseech you, people of the future. We are tired of Anton Pavlovich Chekhov’s plays being performed, and we are tired of being perpetually unhappy in his world. We are counting on you to make the right choices, proving that humanity has finally learned how to be happy, and the Chekhov Operating System has become obsolete.”

Upon logging into the Zoom for the actual performance, the theatergoers/players were greeted with a message from “Charlotta,” the AI powering the chekhovOS, instructing them to go to a specific site on their phones to vote on outcomes during the performance. Viewers were also asked to turn their cameras on, as characters in the play would occasionally grab someone at random from the audience and ask them to participate in the performance. (Leaving your camera turned off was acceptable if you didn’t want to be put on the spot.)

When the actual performance began, Natasha – one of Chekhov’s characters – appeared in the Zoom against a greenscreen background depicting the innards of a old-timey computer. She began instructing players on what to expect, laying out the rules for interaction, and when players might be called upon to engage. While the character was speaking with praise for Chekhov on the screen, audience members were receiving increasingly frantic messages via the Zoom chat to make decisions that would “break the OS” and change the course of Chekhov’s plays. Thus, the cycle would be broken, and the characters would be freed to live their own lives. So yes, experimental game indeed.

While the subject matter is somewhat grim, the Natasha segments were fun and lively, performed against some rather stellar digital backgrounds with cool special effects that kept the pace brisk. Players were first asked to vote on which of Chekhov’s plays they wished to influence. They were then shown scenes from the chosen play somewhat out of order, acted out by some familiar faces from the world of stage, screen and film. Occasionally, Natasha would reappear to interact with the audience, start a new survey, and generally push the proceedings along.

The scenes from Chekhov’s play were performed in a dreamlike, almost lyrical fashion, with characters seemingly disconnected from the reality they were supposedly living in. The imagery surrounding them was floaty and peaceful, but the entire experience had a hint of menace. So much so in fact, that at one point my wife leaned over and commented that “This is going to give us nightmares.” And indeed it did.

Some familiarity with the source material was helpful in following along, but the play quickly became somewhat sidelined when the audience spontaneously started a revolution. By billing the experience as an “experimental game” and including many game-related creators in the production staff, the folks behind chekhovOS ended up with a very diverse audience. There were theater people, Chekhov people, and people from the gaming industry all in attendance. This turned out to be a fairly incendiary combination. 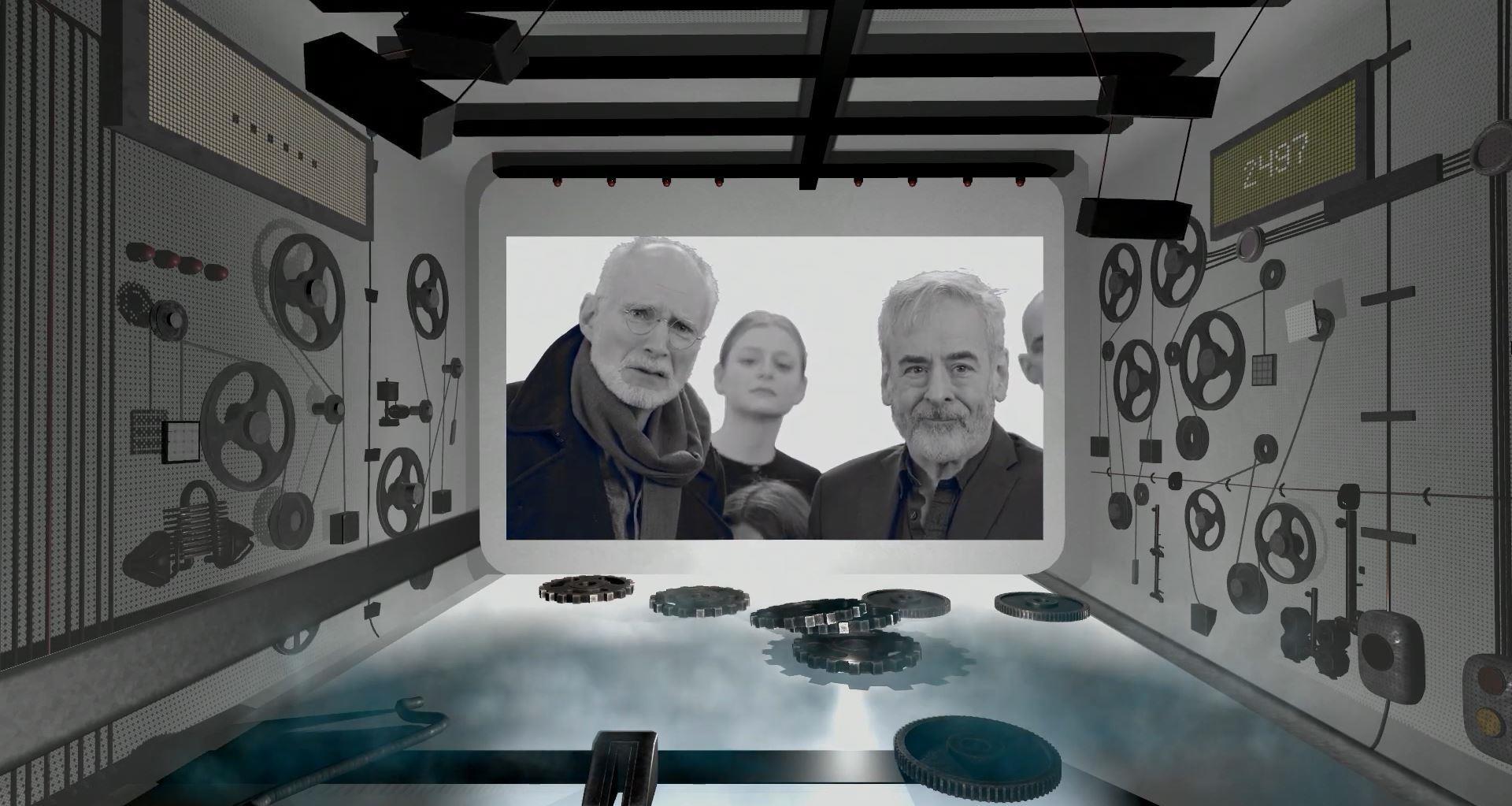 More than anything, the opening night of chekovOS felt like the creation of something new. As the program went on, the Zoom text chat slowly came to life, with audience members discussing various aspects of the experience. One by one, voiced joined the discussion. As people realized that they could speak unabated, more and more joined in, bombarding each other with questions and opinions. Were the “play” portions pre-recorded? Where the votes accurately tabulated? What would have happened if the audience had made different choices? Could people come back to another production en masse, fix the vote, and change the outcome? Did the audience actually have any agency in this experience at all?

Once the specter of the lack of agency was raised, the audience was off to the races. People had questions, and they were asking them in full view of the play’s performers, director, and producers, while the play was still being performed. The quality of performances was discussed. Surveys were taken to determine whether votes were accurate. The structure of the experience was discussed and critiqued. And the entire time, the character of Natasha was chiming in, with pleas for freedom and responses to questions.

As the play went on, the Zoom chat started lighting up so quickly that I couldn’t read every message. It seemed that all 160 audience members were chiming in on what was happening. An entire audience was live-blogging the play in real time, interacting with each other, the characters in the play, and the play’s creators in what seemed like an unprecedented exchange. Before long, the play was being commented on nonstop, resembling a Twitch chat with the rapidity and variety of comments.

“I think it's funny that democracy doesn't work to change a play about the fall of the aristocracy.”

“Guys what if we have a second shot? What if we can mess up another play?”

Call something a game, and you’re going to get some gamers.

Of course, I have my own opinions on how and whether the players were able to impact the outcome of the experience, which I will keep to myself. But the themes of the original Chekhov play we saw pieces of, as well as the themes of the overall chekhovOS experience left me with a lot to chew on, an intellectual exercise that I’m still rolling around in my head. Many people seemed to seize upon parallels to the COVID pandemic when discussing what the play was really “about,” but I think chekhovOS goes far deeper than that. I found myself pondering the current state of political and societal ills in the US, how far people will go to maintain their power, and how they feel when that power inevitably slips away from them. When is empathy due, even when those you are empathizing with don’t really deserve it?

In other words, chekhovOS made me think. In fact, chekhovOS made most of the audience think, with an immediacy that I have never experienced in my interactions with any other form of art. If chekhovOS were a rock concert, this would have been the rowdiest of crowds, screaming, stomping, and setting the curtains on fire. It was unclear whether the producers of chekhovOS quite expected the outcome they got. By giving the audience access to a voice, they inspired a level of interaction far beyond what they may have planned. By giving the audience the means to discuss the art as it unfolded, the creators of chekhovOS may have very well pioneered a new form of interactive entertainment.

ChekhovOS is still in an experimental state. The creators behind the experience commented in a talk-back after the performance that they will continue to develop and change the experience. But what they created on opening night felt like a once-in-a-lifetime experience. One guy commented in the chat that “we should create a Facebook group, because I feel like we’ve been through something.” He wasn’t far off base. I imagine the creators of chekhovOS feel as though they’ve been through something as well.

Only time will tell if the opening night of chekhovOS was lightning in a bottle, or if it will continue to ignite audiences to discuss culture, literature, theater, and games the way they did during the first performance. If you are interested in checking it out, ticket information can be found here, or email boxoffice@arlekinplayers.com. Tickets for chekhovOS are free, with an optional donation.