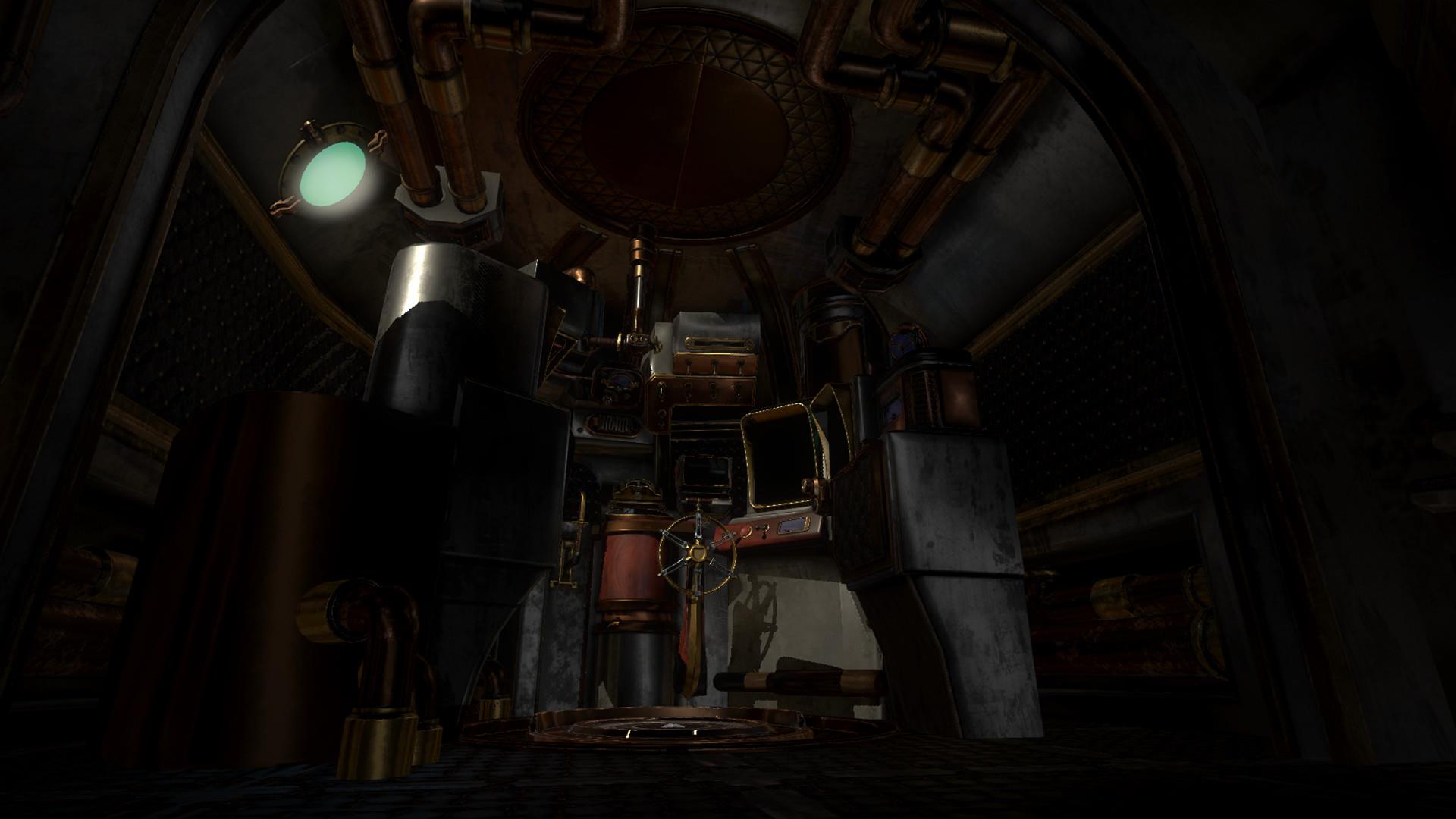 For a moment, crank your imagination to life and consider what it would feel like to get behind the wheel of a car for the first time, if you had never ridden in a car before. If you had no familiarity with what we are all attuned to consider an intuitive interface, it would probably take you quite a while to figure out that your key needs to go into the ignition. Through experimentation, you would eventually figure out how to put the car in gear, though the windshield wipers might be flapping back and forth for no reason. The first time you hit the gas and the car surged forward, you might feel a surge of victory, followed by abject terror because you don’t know how to steer and the radio is blasting out prog rock. 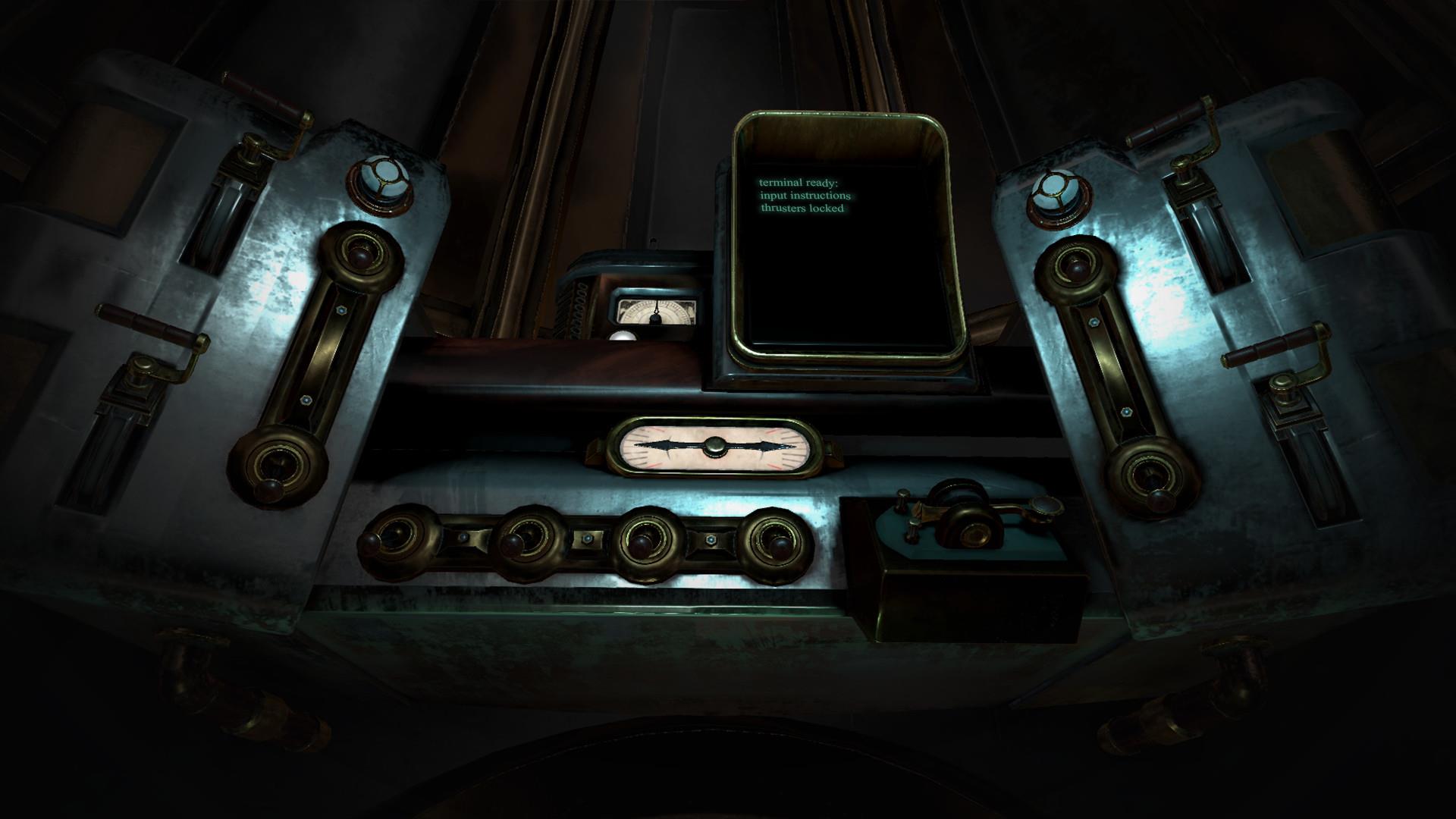 Now take that flight of fancy and apply it to a submarine. If you had never seen any submarine movies, and you only had the vaguest notion that this was a craft that was used to travel under the surface of water, would you be able to eventually figure out how to make the sub move forward? Could you get anywhere without quickly flooding the compartment and drowning yourself? What if you were attempting this complicated task, but you were a dolphin? Or a bear? Or any species that submarines are not built for?

That’s the quandary that A Rogue Escape, the new VR puzzle roguelike from developer Spare Parts Oasis and publisher Armor Games Studios, drops players into. With very little in the way of opening story, players take the helm of a Nauticrawl – a giant hunk of metal made to be controlled by…not you. The player’s mission is to escape a from wherever they currently are, and maybe find a few clues about how they got there along the way. 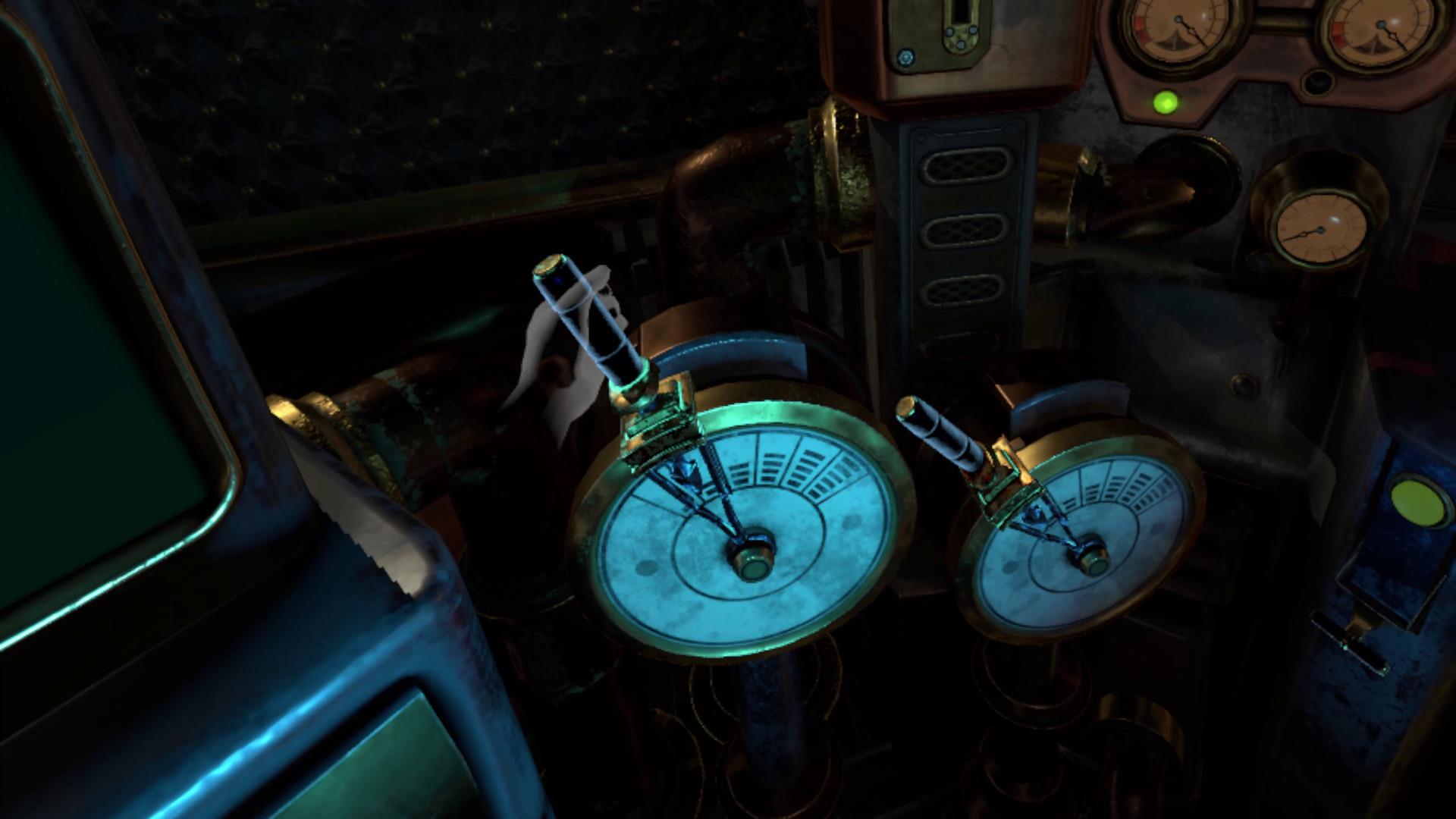 The interface that players find themselves in front of is complex and overwhelming. Knobs, switches, dials, and levers stick out from every surface. A few exploratory flicks and pulls make absolutely nothing happen. It all seems hopeless. But before long, experimentation and exploration pay off a bit. A datapad contains pictographs with the order of operations to get the Nauticrawl started. Gauges that look like heat and pressure might actually be relevant to heat and pressure. And after a fair amount of time pushing and prodding, you actually get the thing to move.

But getting the Nauticrawl to move and keeping it moving are two separate issues. Much like the imaginary submarine in the intro, there are no portholes to see where you are or where you are going. Like many terrifying real-life vehicles, the Nauticrawl must be maneuvered via instrument readings – most of which are utterly unintelligible at the beginning of the game. 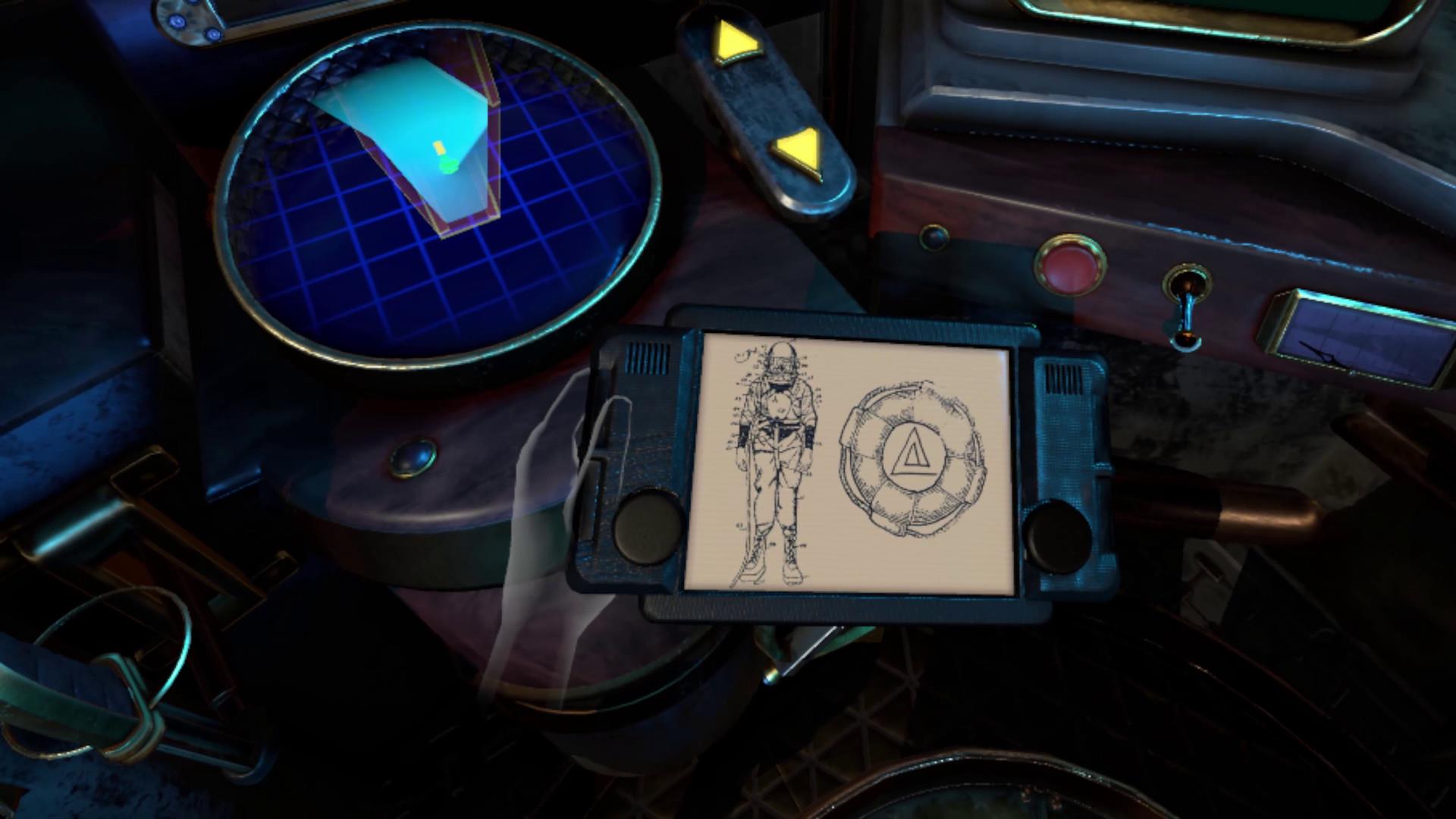 Before long, questions begin emerging. Why does the Nauticrawl keep overheating? Can I move backwards? Do I need to set a destination in the interface somewhere? Where is the fuel gauge? Do I need to keep the Nauticrawl at full steam, or will it stall out if I lower the pressure? Am I causing these issues, or is this just how Nauticrawls work? Where am I? What am I doing here? What is the meaning of life?

Before you uncover the answers to any of these questions, you will die, and be pushed back to the beginning of the game. A Rogue Escape is a roguelike, after all. It’s right there in the name. You can expect to die a lot. You may be desperate, and you many be smart, but you are not going to escape on your first try. I’ve started the Nauticrawl so many times that I have the order of operations memorized. I can flip, twist, and push that thing to life in about 10 seconds. Each time I try to escape, new things dawn on me, light bulbs switch on in my mind, and I realize that there are new paths I can take. New buttons to push. Stuff I still haven’t tried yet. 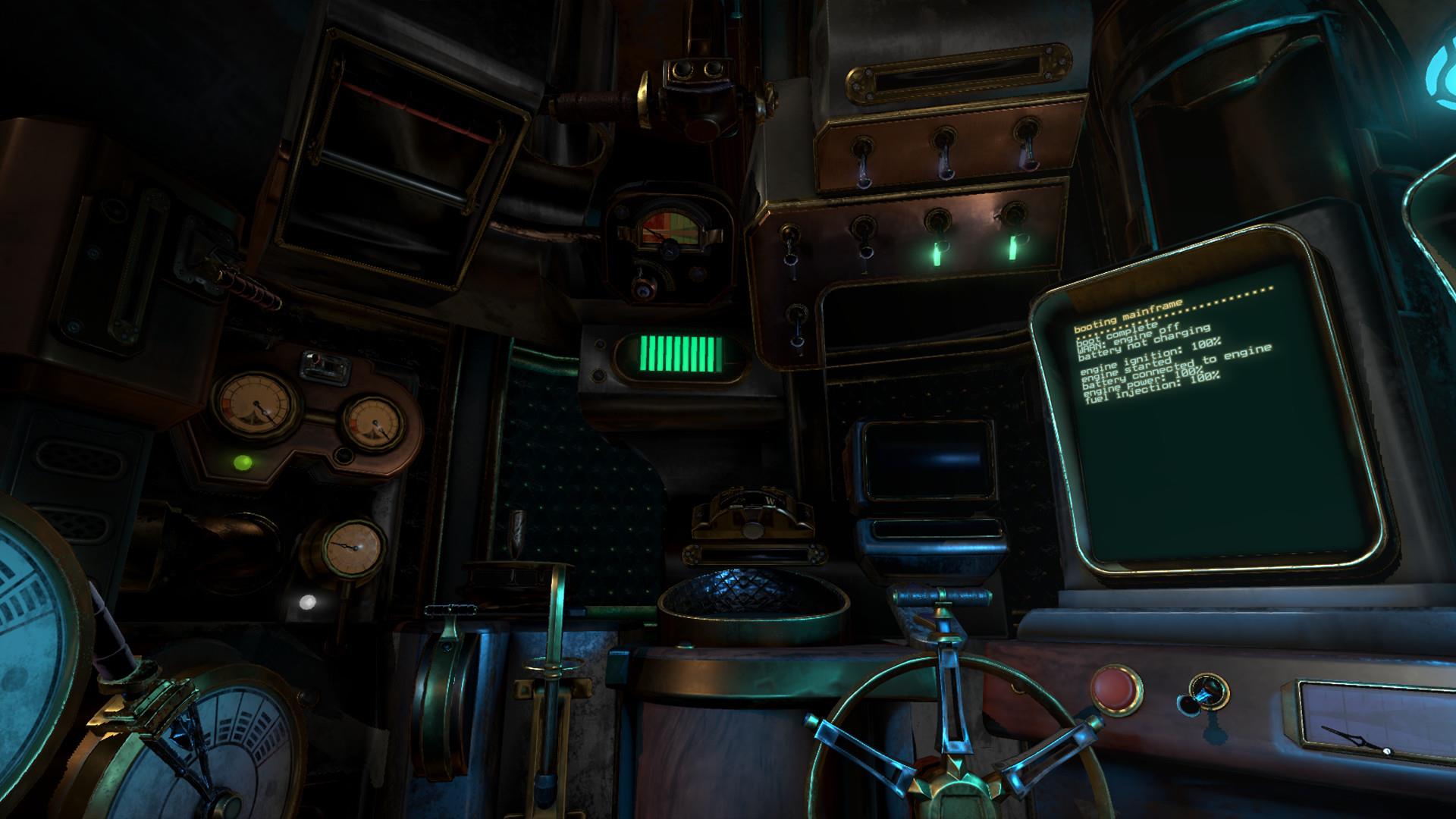 Giving just enough information for players to get started, A Rogue Escape rewards patient experimentation. The game settles into a low simmer of anxiety, allowing the player all the time in the world to fry themselves while reporting on events outside via a nearby text screen. Potential escapees should settle in for this one, because it is not the sort of experience that comes easily. Hell, it took me about 20 minutes just to activate the elevator to the mech (though this was a shameful display – once I figured it out, I was rightfully chagrined). Just set your frustration meter to “low” and your diligent experimentation threshold to “high” and you ought to be all right.

Spare Parts Oasis has produced this sort of game before, with 2019’s flatscreen title Nauticrawl. While I’ve never played that title, I feel pretty confident saying that moving the format to VR was the right move. I played on Oculus Quest 2 and found the experience to be engaging and immersive. Everything felt tactile, and the controls reacted exactly as I expected them to (though I was often unsure of what impact toggling the various widgets would have). During my play through, I ran into zero bugs, nor did I experience any VR weirdness that sometimes comes with titles like this. And taking place in stationary environments, there is zero chance that this title would make any but the most sensitive people feel at all uncomfortable.

It should be noted that A Rogue Escape is room-scale VR. Don’t plan on sitting in your office chair for this one, as you’ll need to stretch and reach for levers and knobs. The first time I played, I was in my bedroom, and kept whacking my hands into the dresser and side tables. After relocating to a more open space where I could take a few steps, things went far more smoothly. 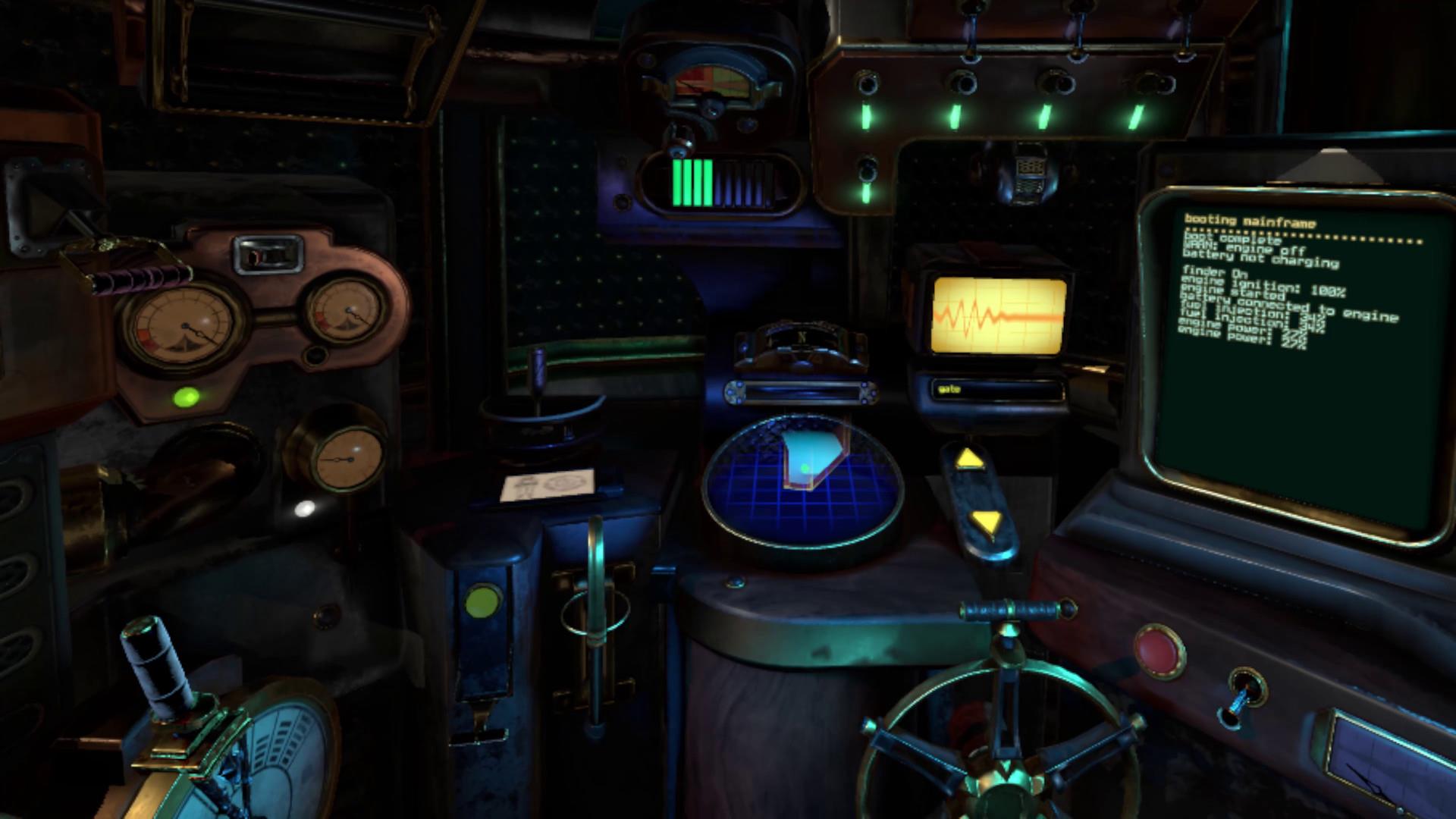 Escape room games are especially suited for VR, and this one is no exception. The loneliness of the situation is magnified by the fact that you and you alone are responsible for figuring out the Nauticrawl’s interface, which may or may not be a good thing. One of my favorite gaming memories was playing through PS VR’s Statik with my older sons on one rainy afternoon, using our collective intellect to power through that game’s savagely difficult puzzles. At certain points in A Rogue Legacy, I wanted to lay my head down on the control panel in frustrated weariness; I could have really used the input of a few more people.

But such is the nature of VR; and the fact that it all comes down to your ability to put together the pieces is what will make or break a lot of players. But for those with an insatiable curiosity and a need to assemble puzzle pieces into something coherent, A Rogue Escape will offer hours of Steampunk-y entertainment. Just remember to take your blood pressure meds before strapping on the Oculus Quest, settle in for a lot of bewildering fiddling and fussing, and 20 or 30 dead escapees later, you’ll find yourself triumphant.

A Rogue Escape gives players just enough information to get started on their escape in an alien mech, and then allows them to fiddle and fuss their way to a fast and un-triumphant death. With tactile controls and fun reveals, the game slowly unfolds like the very best escape rooms. Bring your thinking cap and patience.