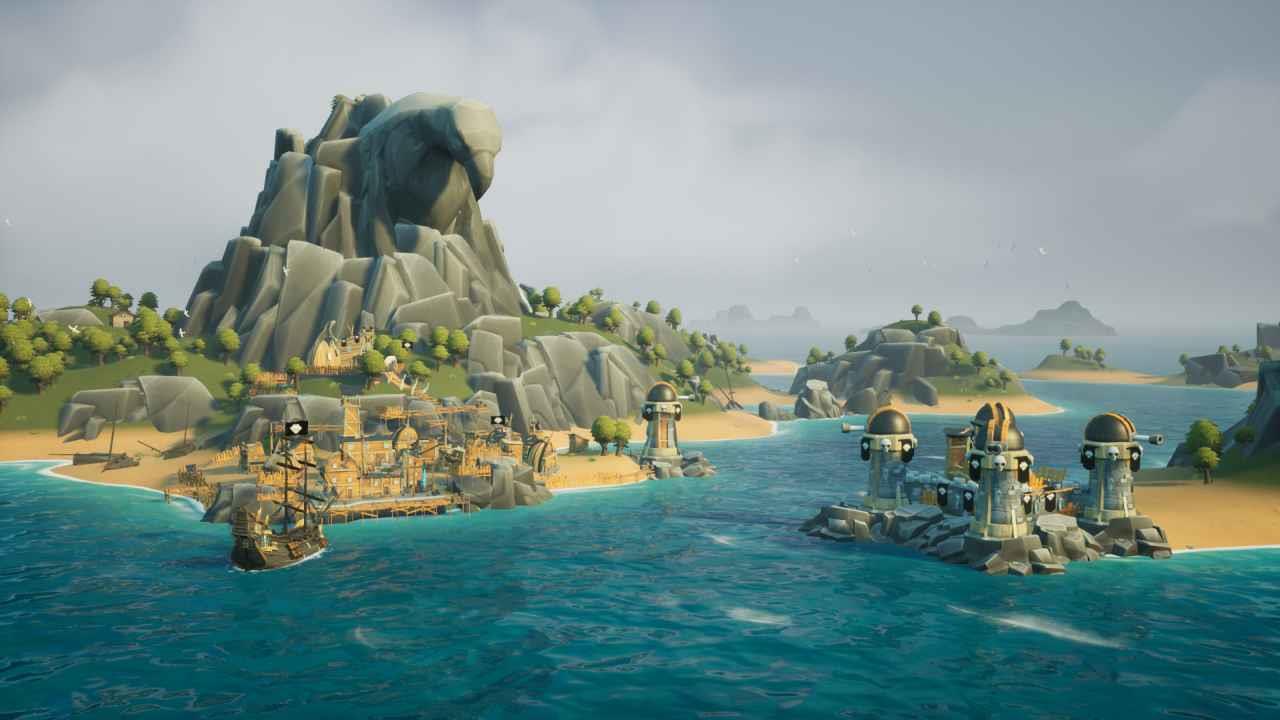 It is sometimes difficult to critique a game that you want to like. Sometimes, games come along with a great, appealing concept, lively graphics, and a good story, and you really want to love them. But one nagging thing keeps pulling your attention away from the fun, until finally you realize that you are no longer being entertained.

In the case of King of Seas, a new pirate-themed RPG, my problems almost all stem from the leveling system, and how it doesn’t allow the player to ever feel any more powerful, and sometimes even makes the player feel less so. In most RPGs, players gain new skills with increased levels, as well as some across-the-board stat boosts. At the very least, the player can choose a couple of skills and sink some points into them to feel an incremental increase in power. It is often a fun power fantasy to take your character back to the starting area of an RPG to dominate enemies that once terrified you. 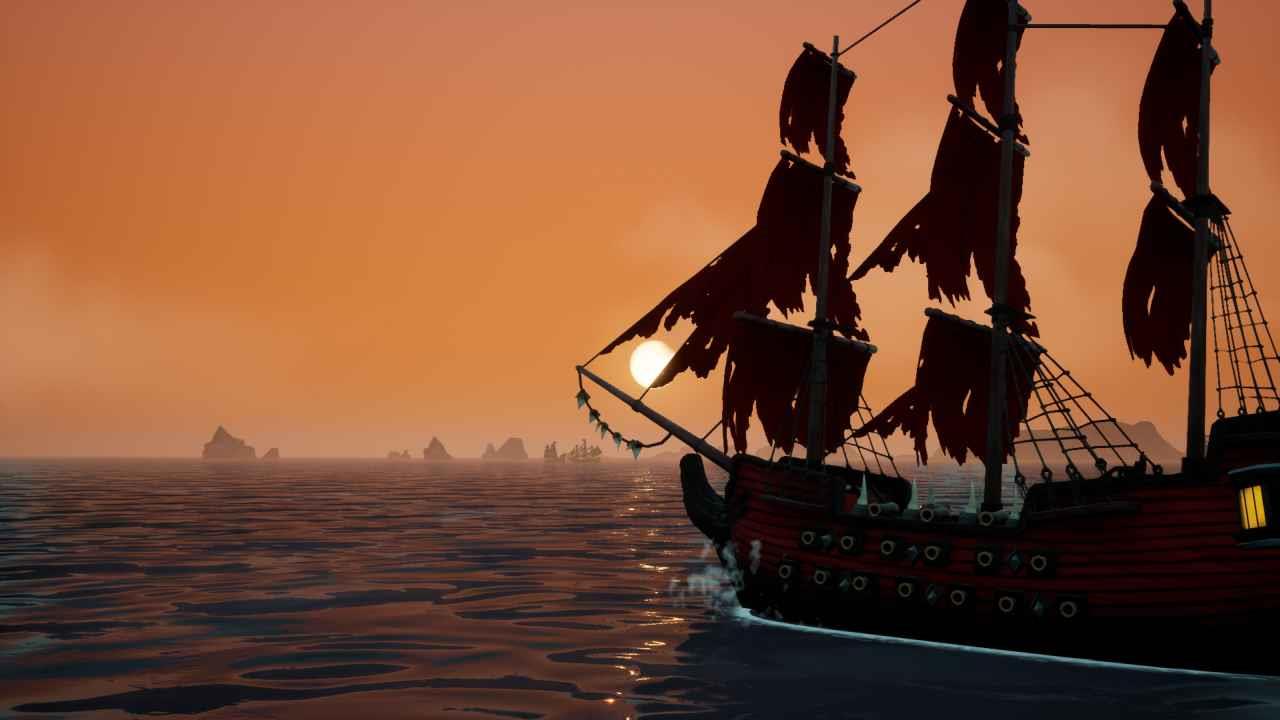 Not so with King of Seas. While the player does indeed gain levels, King of Seas’ enemies scale right along with them, creating a dynamic that forces excessive grinding to push the game forward. Worse still, King of Seas has actual quests that demand that the player grind—giving them tasks to go out and earn a certain amount of money or kill a certain number of ships. This method of game design always feels artificial to me, but it has been a while since it grated on me quite as dramatically as it does here.

It’s a shame, because there is a ton about King of Seas that I actively enjoy. The game starts with a little story vignette, done with fun cartoon-ish characters superimposed over the top-down isometric view of the sea that makes up the majority of the game. The plot is quickly outlined, explaining how the “King of Seas” was assassinated, and his child was blamed (you can choose to play as the king’s daughter or son). Rescued by pirates from an ambush, the child is quickly set up with their own ship and sent off to solve the mystery of who murdered the king while marauding the seven seas. 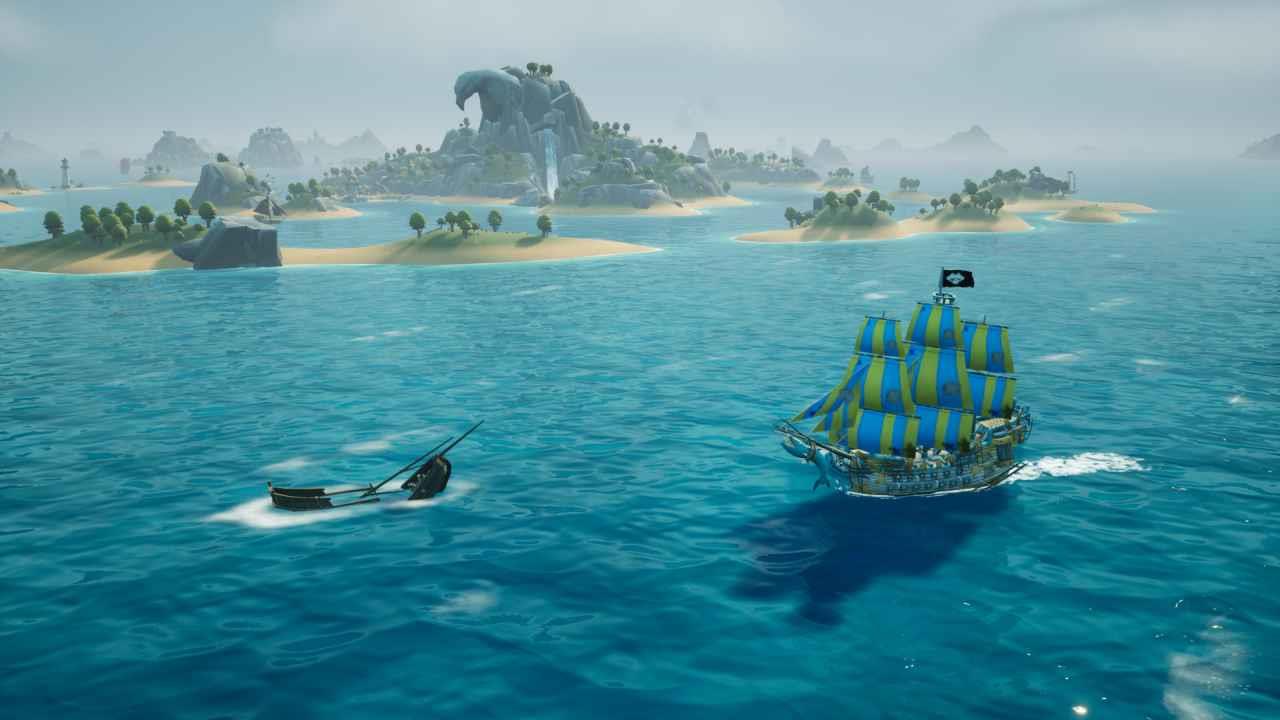 The actual sailing can be fairly bumpy at first, but I settled into it after a bit. Steering is handled by the left stick, with the left bumper buttons raising and lowering three levels of sails to speed up and slow down. Your ship has momentum, and can be damaged by crashing into stuff, so its advisable to get a handle on maneuverability as quickly as possible. Weapons are fired by depressing the triggers, and the face buttons are assigned to special magic powers that, once found, can quickly turn the tide of battle.

Along the way, you can customize your ship in plenty of really cool ways. Of course, you have to find the proper equipment to do so, but you can change the cannons on your deck, the bullets they fire, the masthead, the sails; the customizations are extensive. You can even swap out your crew for a new one with a different specialty. Each piece of equipment comes with its own stats, perks, and abilities, making the hunt for better stuff one of King of Seas’ driving forces. 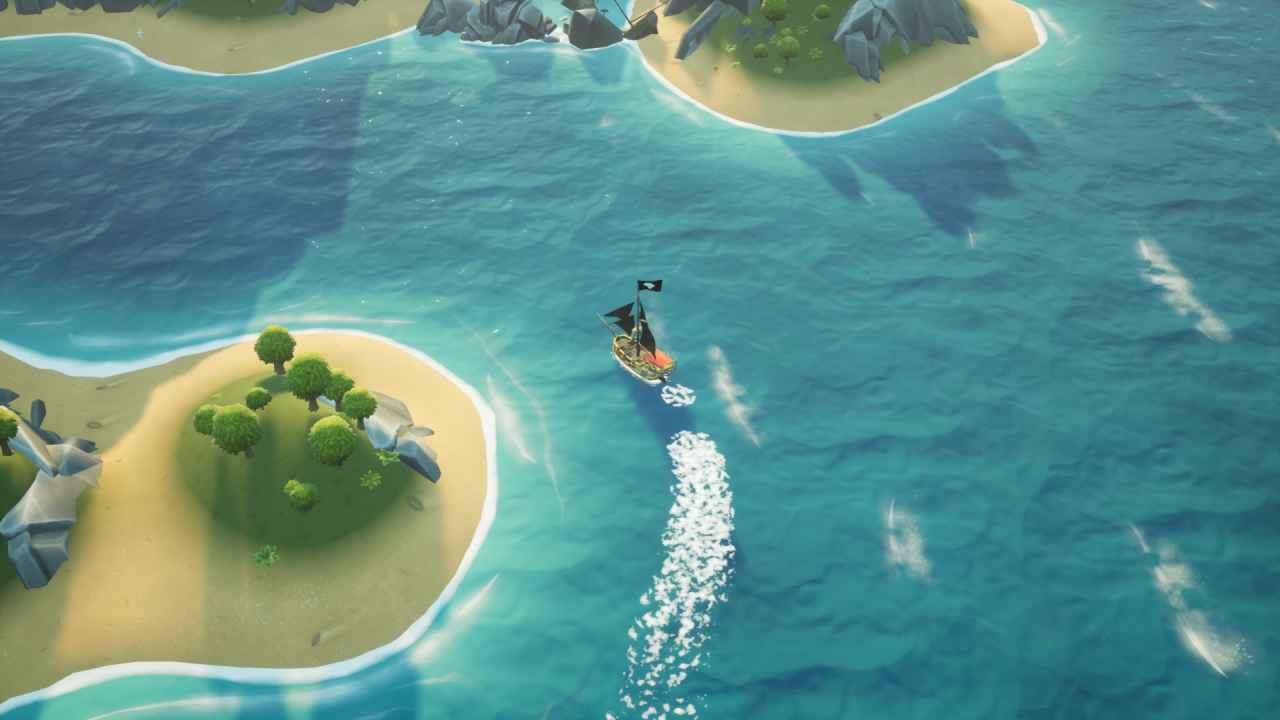 As you pursue the mystery at the core of the plot, you are free to meander around the rather sizable procedurally generated map, taking potshots at traders and smugglers, visiting the many settlements nestled in the islands, and paying weather stations to fill in pieces of your empty map. Occasional pirate hunter ships and government officers pursue you to keep you on your toes.

At first, it seems as though there is plenty to do. Treasure is all over the place, and riches can be found fairly quickly if that’s what you are after. A simple trading system can multiply your cash, if you are willing to work at it (I just tended to sell all my stuff off to whoever was handy, no matter how much or little they were paying, which still netted me plenty of cash). And, of course, you can plunder the seas, sinking other ships to gather the  that booty that bobs to the surface. 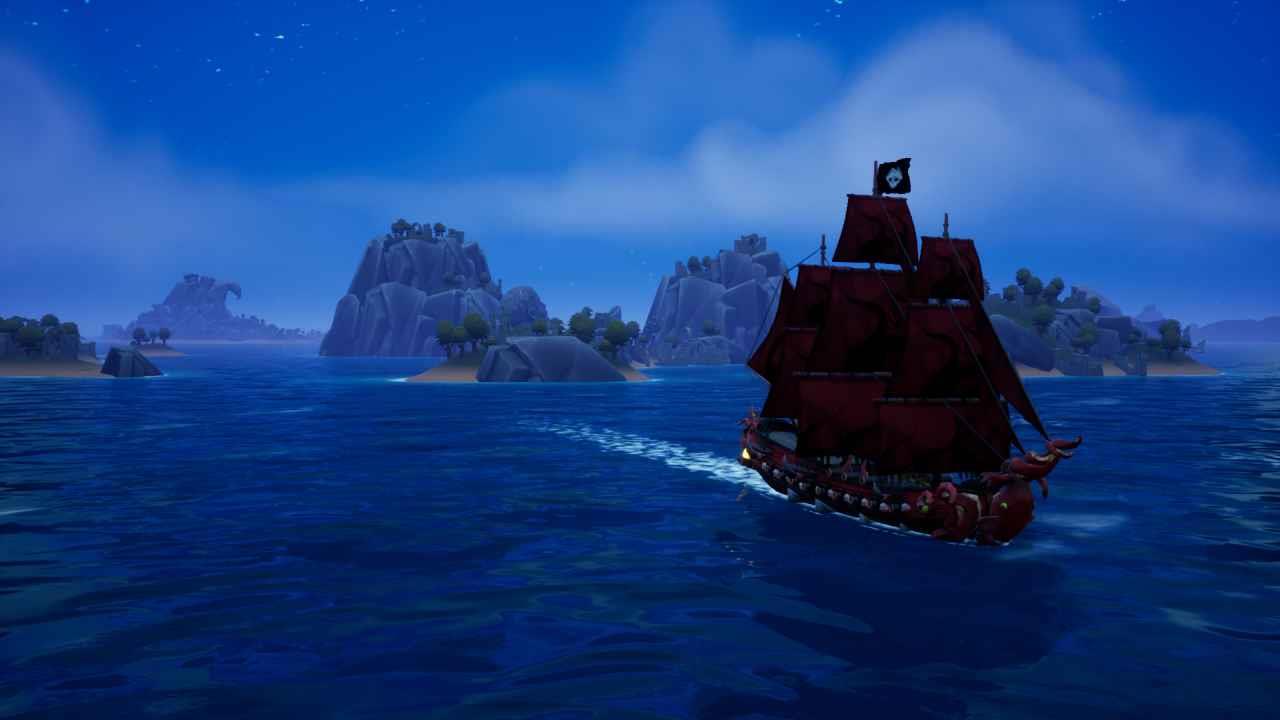 But after a few hours, you will realize that you have seen everything that King of Seas has to offer. Sure, you can pick up new quests at each settlement, but they all boil down to either “go to this place” or “go kill this dude who is way too strong for your current level.” You can phrase those two missions with whatever fancy nautical terminology you want, but in the end, they are still just fetch quests.

Exhausting all of the optional fun, the player is left to pursue King of Seas’ story, which is where things get completely bogged down. I mentioned before that the enemies scale with the player, but that isn’t quite accurate. It would be more appropriate to say that King of Seas’ enemies scale above the player. Say that you are level 15, and you accept a basic quest to go kill a military commander. Well, that guy spawns in at level 15 or 16, but if you zip over to him expecting a fair fight, you’ll soon be laying at the bottom of the ocean. These guys are way stronger than they should be, which is often frustrating. At King of Seas’ default difficulty, expect to grind for at least five levels to beat what should be fair fights. 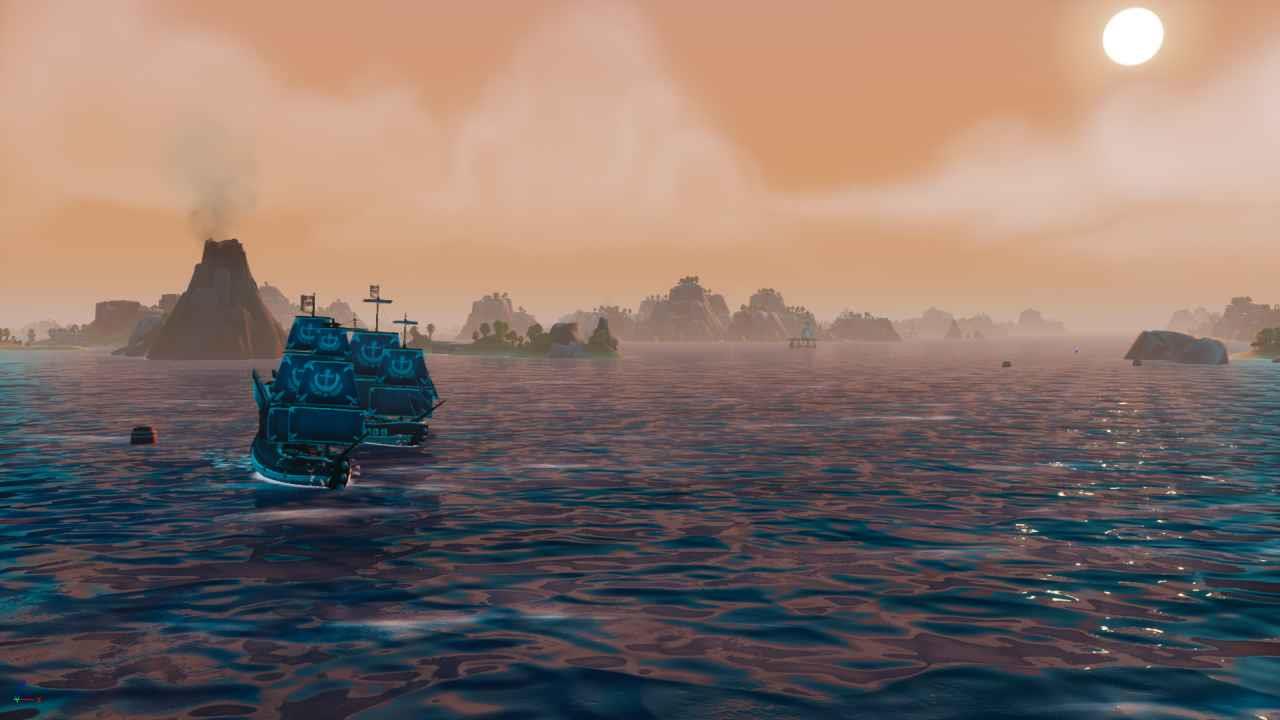 The entire game is structured like this, with story missions immediately spawning in well above your level, necessitating a bunch of grinding to move things forward. When you just want to see what happens next, this will have you grinding your teeth to nubs. It doesn’t help that when you die, you spawn all the way back at your home base, meaning that you could have a good 10 minutes of sailing (getting attacked by overzealous cop ships along the way) before you can try again. Ugh.

Other frustrations mount up to sink King of Seas. Ships you are pursuing disappear if you allow them to wander off screen for a moment. Picking up plunder often rewards the player with multiples of the same item. Gear scales with the player just like enemies do, which takes away the fun of finding a really great epic—it will just be outdated in an hour or so. The inability to rotate the camera is frustrating while sailing, but can be absolutely crippling in battle.

It’s a shame that King of Seas suffers from such structural defects, because the actual sailing, fighting, and exploration are a lot of fun. I saw none of the bugs I noted when I took a look at King of Seas demo on Switch; the game runs smooth and clean. But no matter how appealing the blue water and sea shanties are, you eventually realize that King of Seas is padding the experience at every turn to extend the voyage, which can make players feel like captives instead of captains.

While the cheerful island graphics and pirate themes are fun, King of Seas' over reliance on grinding quickly stifles the enjoyment. Exploration is highly enjoyable, but after you've seen everything, the story is the only thing left to pursue. Artificial barriers to extend the experience frustrate, as there is little satisfaction in grinding to victory.