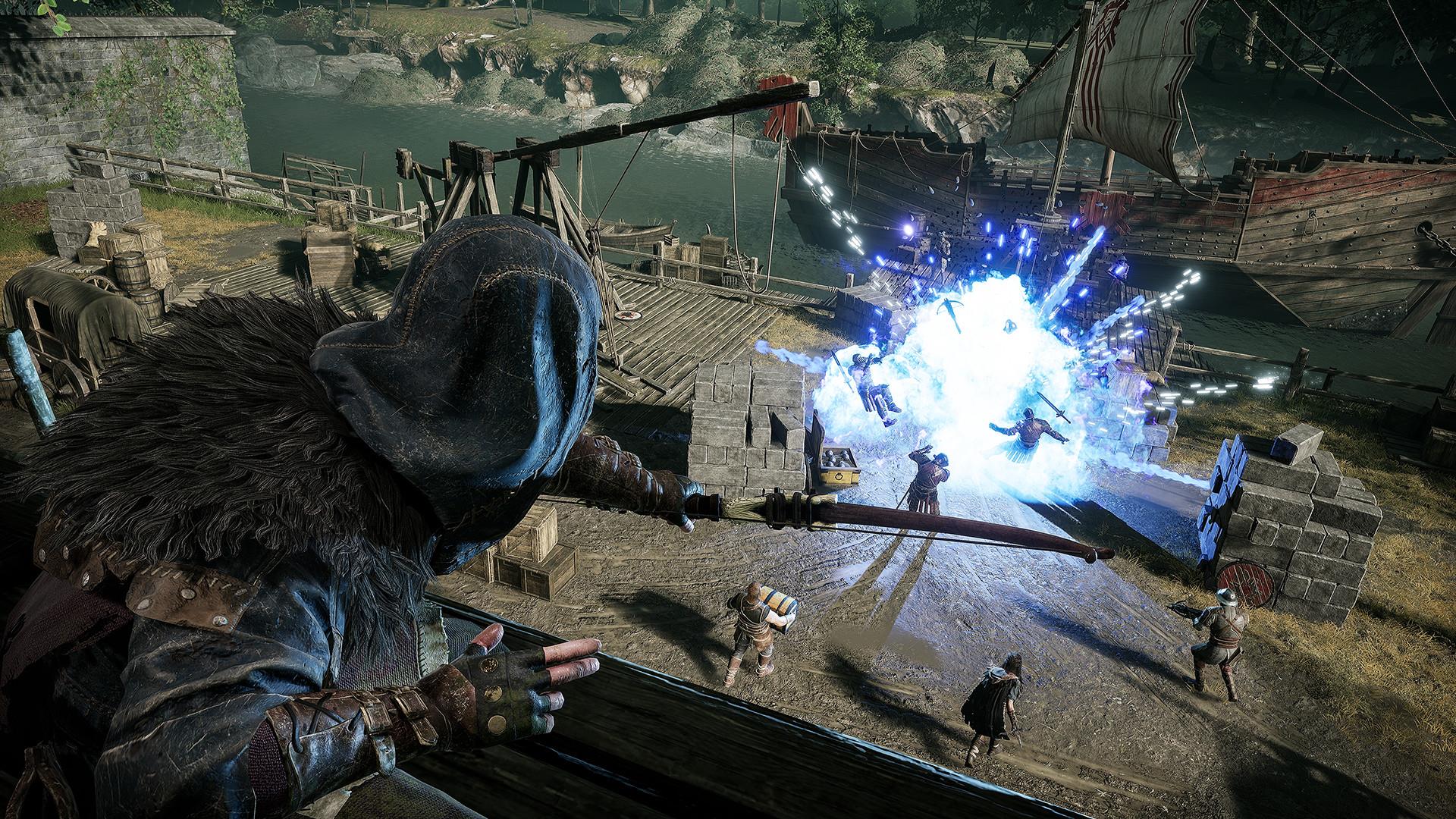 I don’t know what I expected from Hood: Outlaws and Legends, but it certainly wasn’t the game that I booted up on launch day. I was familiar with all of the game’s elements, of course, having watched and written about the many trailers leading up to the game’s release. But what caught me off guard was the dour nature of the game, the cheerless grind that traps players in a Groundhog’s Day loop of repeating heists in which little changes and rewards are few. 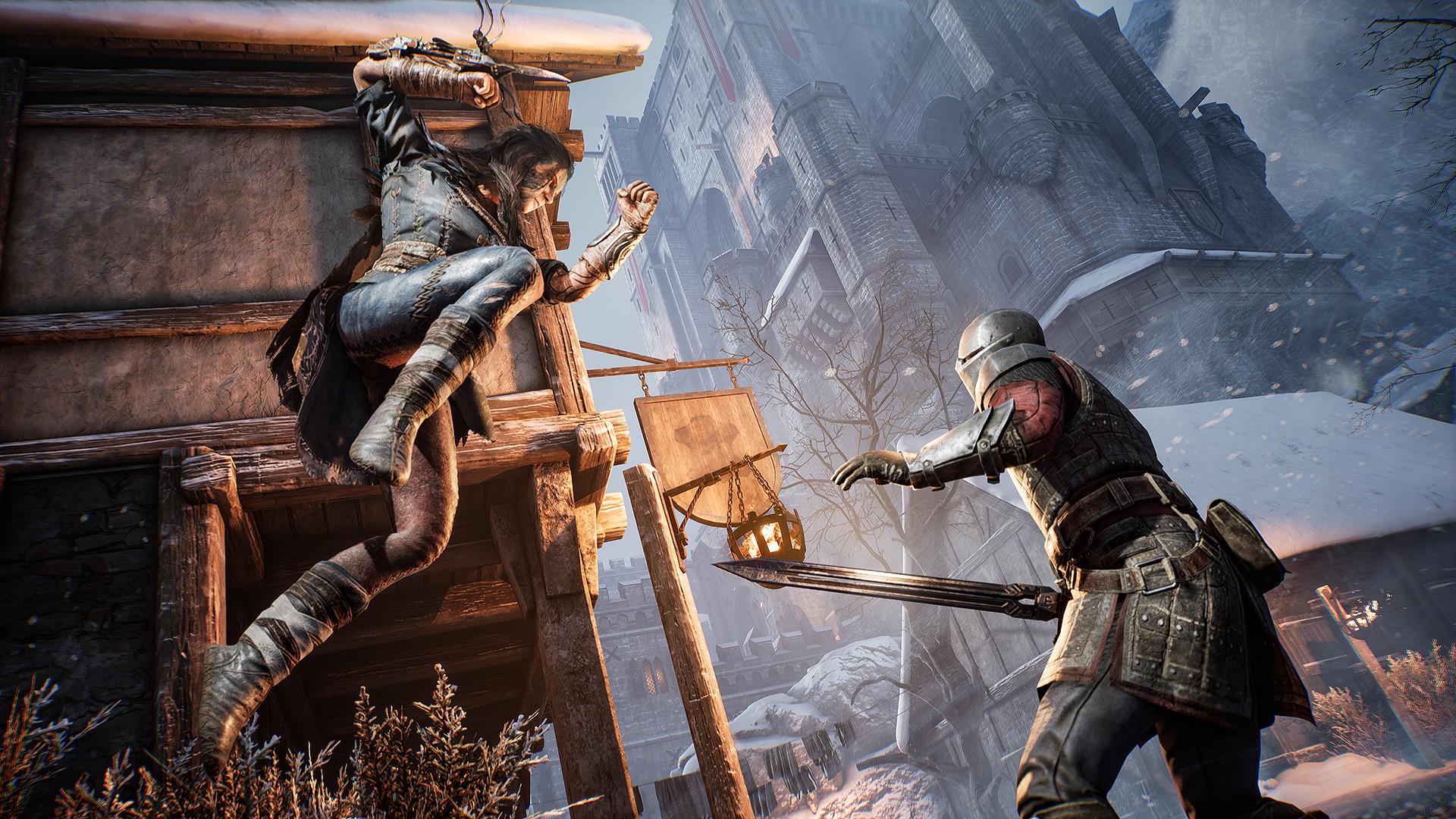 Ostensibly based upon the legend of Robin Hood, if Robin Hood were a grimdark serial killer, Hood pits two teams of four to compete against each other in a heist. Teams spawn at opposite ends on one of six maps. The goals are clear: find the “Sheriff” and pickpocket a key from his belt while his back is turned; use the key to open a vault; remove a chest of goodies from the vault and carry it to an extraction point; winch the chest up and out before the other team, winning the game.

That’s the idealized version of what happens. In reality, it goes differently. Players choose one of four iconic characters to take into the heist, each of whom has their own strengths and weaknesses. Robin is a sniper, able to take down foes with a charged-up headshot. Marianne is a gross paint-covered assassin, who can go invisible for a few seconds to better her chance at unseen backstabs. Tooke (Friar Tuck, if Friar Tuck were a dungeon-dwelling Iron Maiden artist) runs around bashing people with a flail, healing people with his special powers on very rare occasions. And Little John is a lumbering oaf who clobbers people in the head with a hammer. Each character has a few basic melee attacks, which are very dependent on Hood’s tiny, too-easily expended stamina bar. 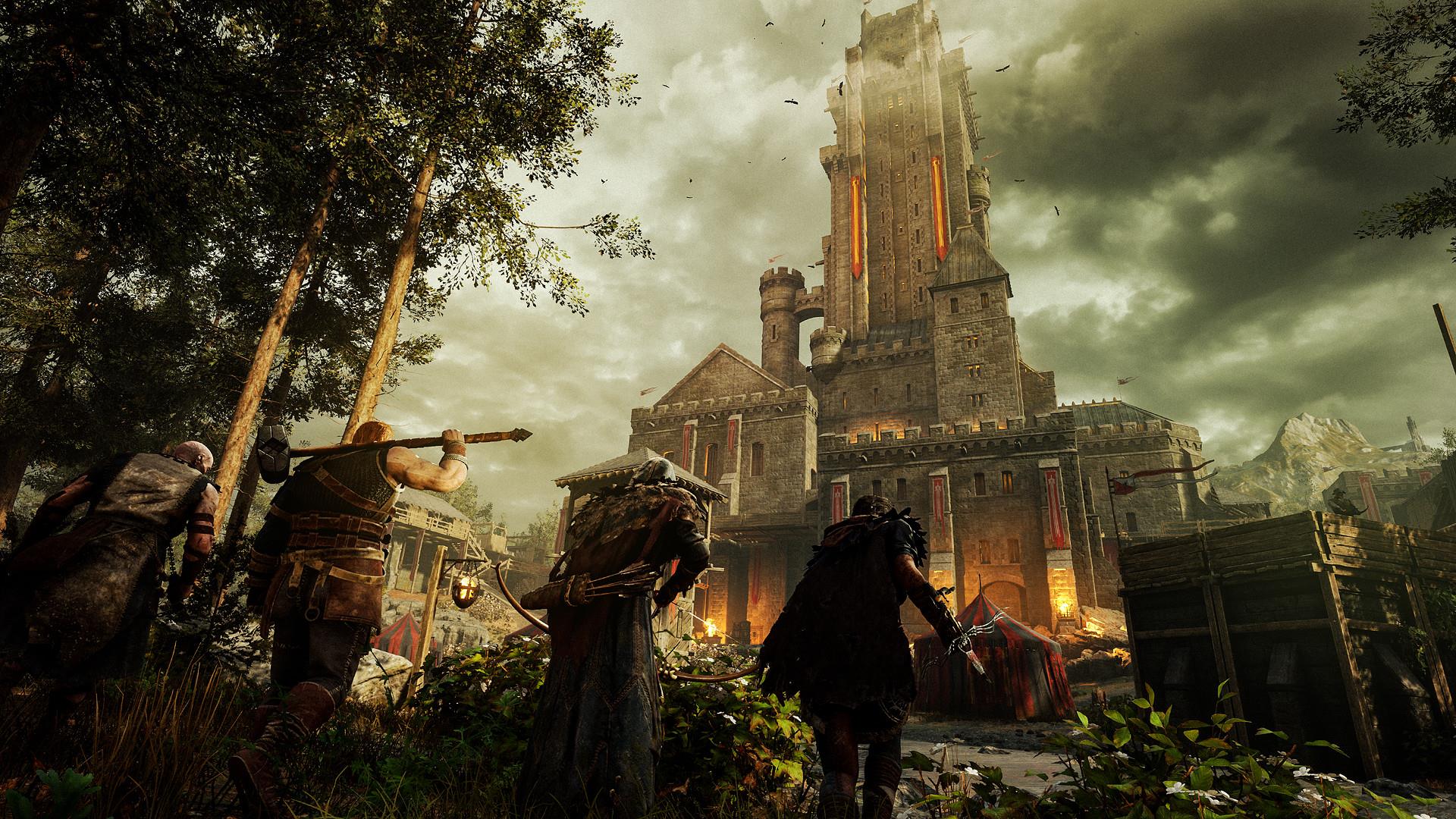 You spawn into a map with your team, which usually has several Little Johns and zero Robin Hoods. Half of your team is muted against the other half, because the second half is usually spouting a bunch of toxic nonsense. The team starts creeping forward, assassinating guards along the way and trying not to get spotted. Both teams are searching for the Sheriff, who is dangerous for the two seconds it takes to creep up to him and steal the key, at which point he returns to being the slowest, least interesting enemy in video game history.

Once the key is stolen, it is time to make your way to the vault. Chances are about 50/50 by this point that you will have encountered the other team, which can lead to a key-stealing fracas, which usually alerts the guards and creates an untenable mess. Everybody gets killed, and then you all race back from the respawn points to claim the key. 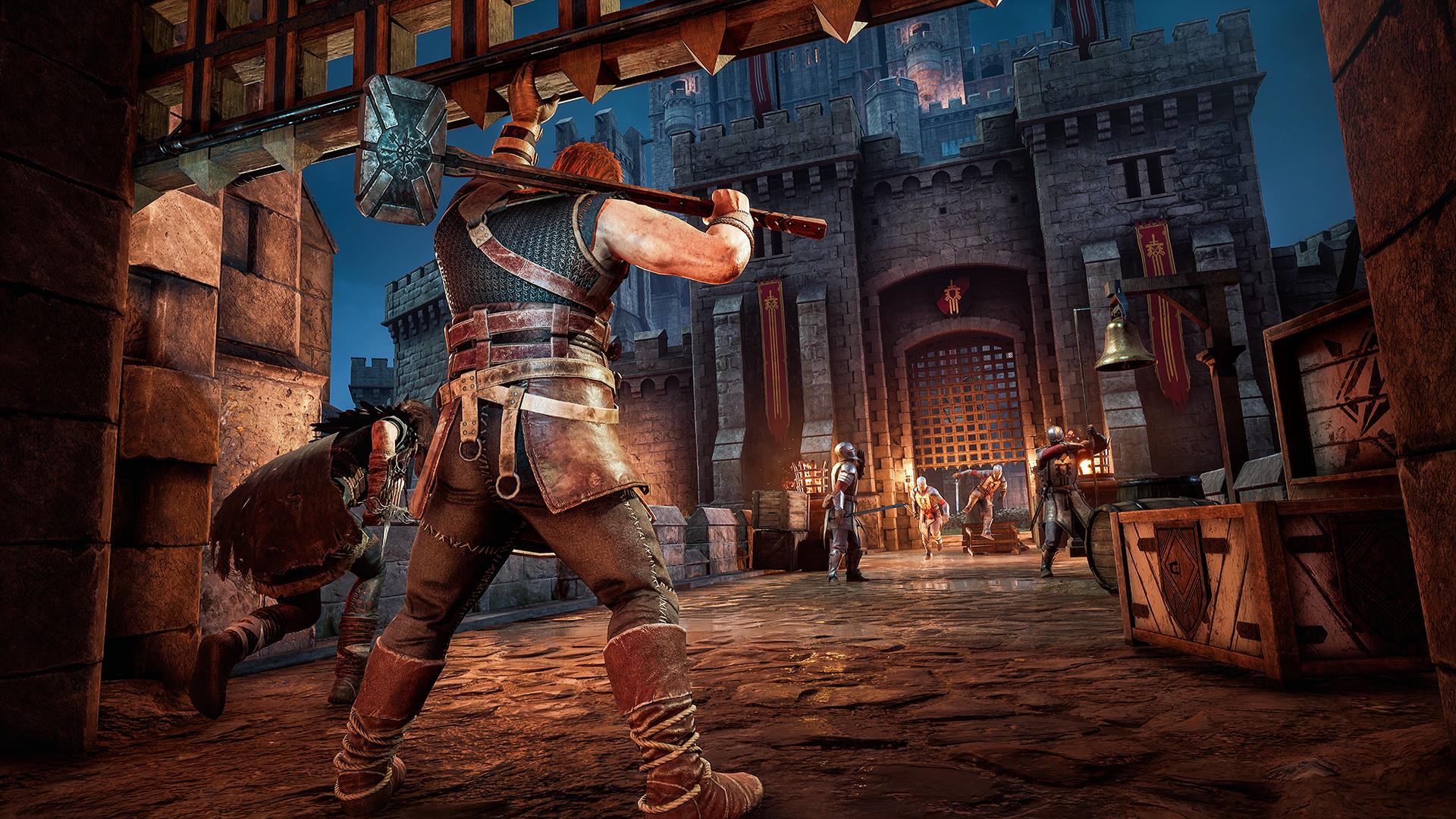 Once at the vault, one of the players picks up the chest. This player is doomed to walk slowly to an extraction point while the rest of the team “protects” them, which usually means that they hang with them for four seconds before veering off to chase enemies across a graveyard. This typically distracts both teams for the duration of the long, slow walk to the extraction point, whereupon both teams receive a notification that the treasure is being winched. Everybody freaks out and runs to the extraction point, where a free-for-all festival of murder commences.

On some occasions, the Sheriff shows up at the extraction point to help with the carnage. It is possible to kite him over there, if you are willing to move very, very slowly. Once in place, he stands there like a statue, spitting cuss words, and killing anyone dumb enough to prance into his reach. 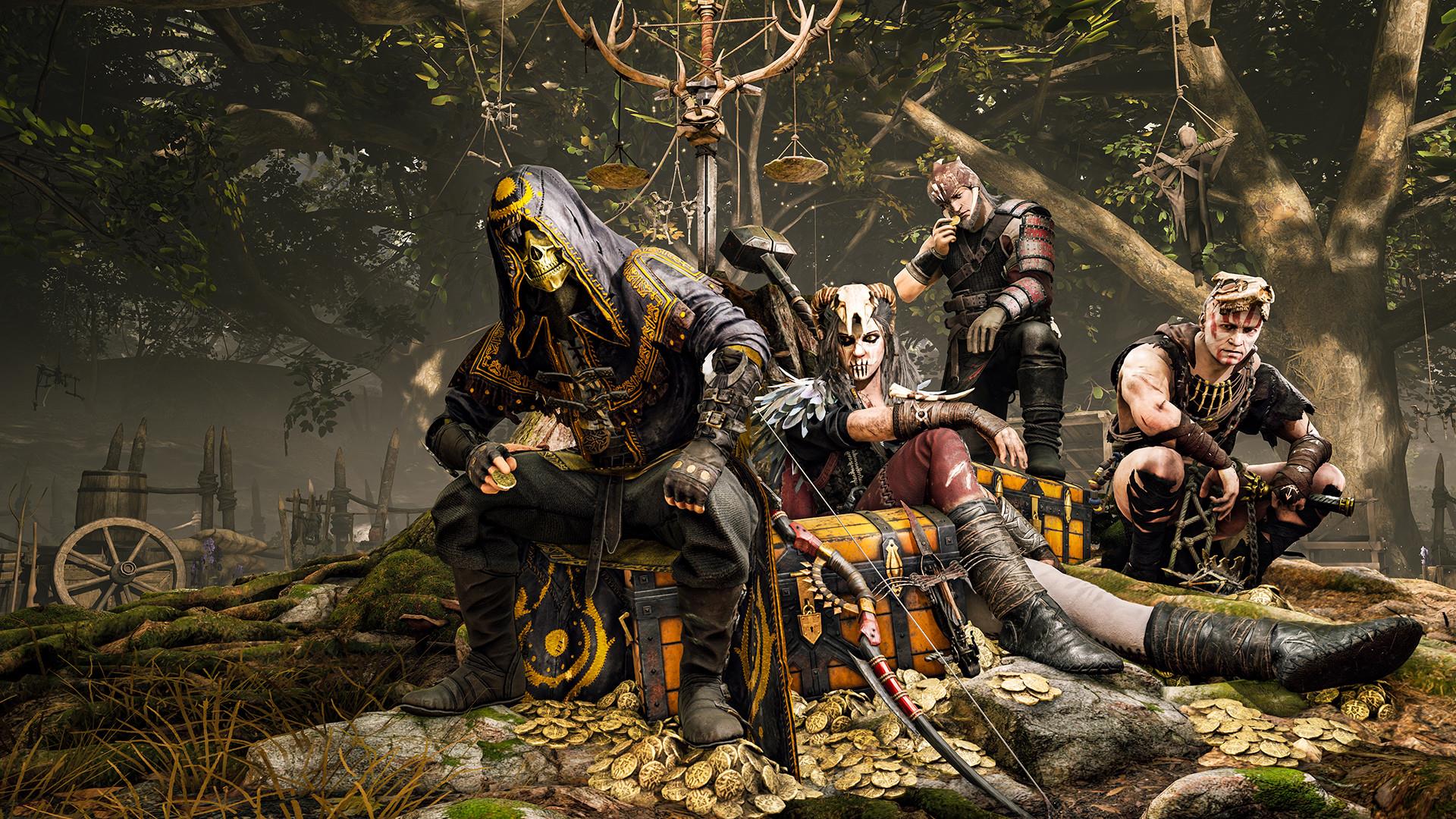 The problems with Hood’s gameplay are many and deep. Marianne’s stealth attacks don’t light up as consistently as I would like. I don’t recall ever being healed by one of Tooke’s special moves. Robin can snipe from half the map away with a skilled player at the controls, which often leads to some frustrating deaths when you have only taken two steps from the spawn point. Most of the melee attacks feel deeply imprecise – in part due to the tiny stamina bar, but also because of some weird hit-detection issues. As a result, many players default to using John, who has a powerful AOE attack that allows players to smack the ground and bash all nearby characters. That feels cheap, but most of the other attacks are inconsistent, so I can’t really blame people. 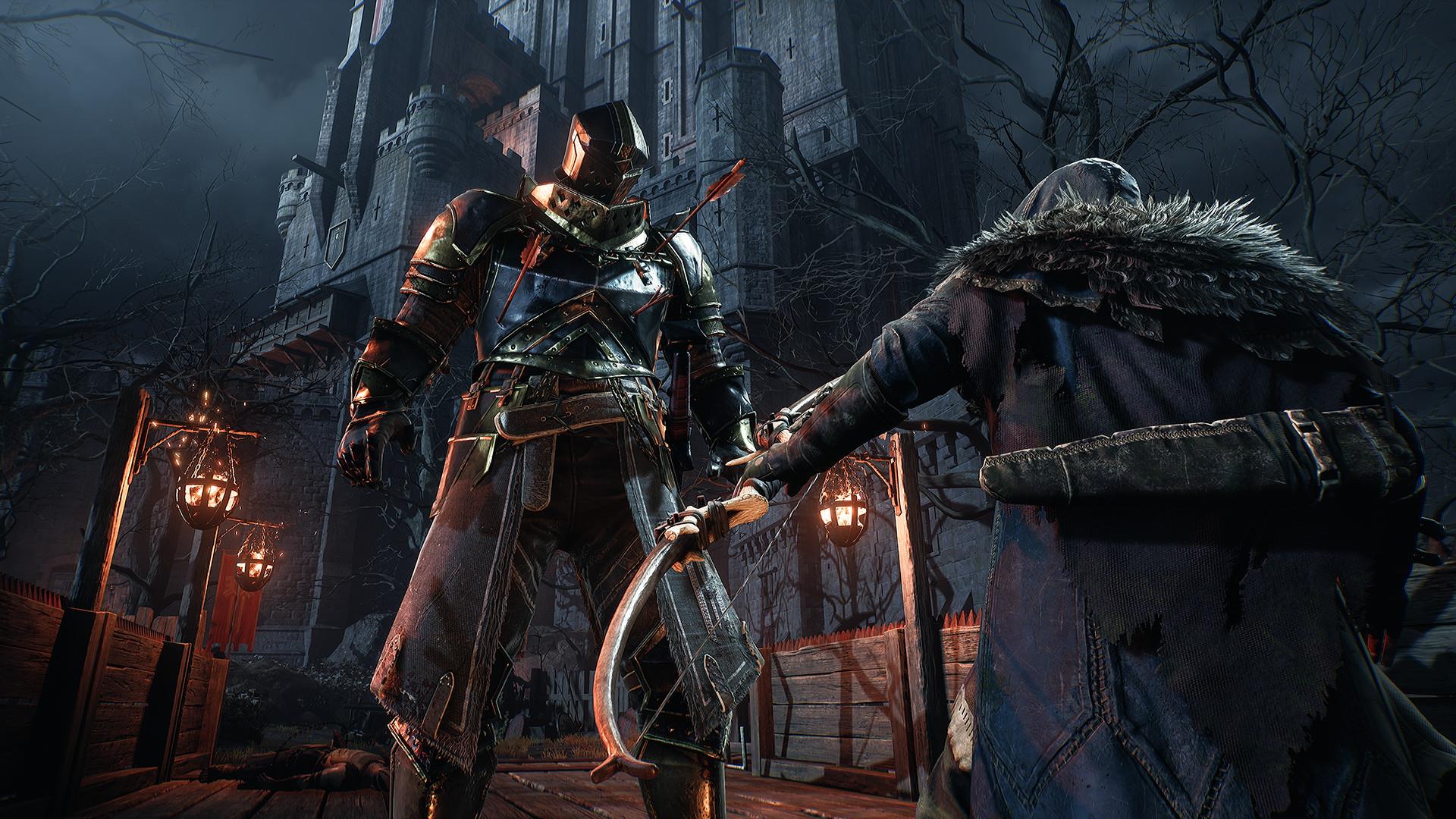 It may sound as though I completely hate Hood: Outlaws and Legends, and I must admit that my frustration has run pretty deep. But it is possible to have fun with the game, despite its deep jankiness. The maps are well designed, and creeping around sniping the dummkopf guards provides a certain, messy amusement. It is fun to pull off assassinations on the opposing team, and occasionally funny things happen, like the sight of two Robins, out of stamina and dancing around each other trying to vie for assassination position.

I should also point out that my 20-year-old son, who is far more excited about competitive multiplayer than I am, pronounced the game “great.” He immediately enlisted a couple of buddies and went to work with a team, obliterating other teams and merrily winning match after match. When I asked about the janky combat, he just shrugged. “You just learn the janky combat and make it work for you instead of against you.” Of course, he is done with school for the year, so he has time in between SMITE runs to engage in that sort of thing. Me, I just want the combat to be less janky. 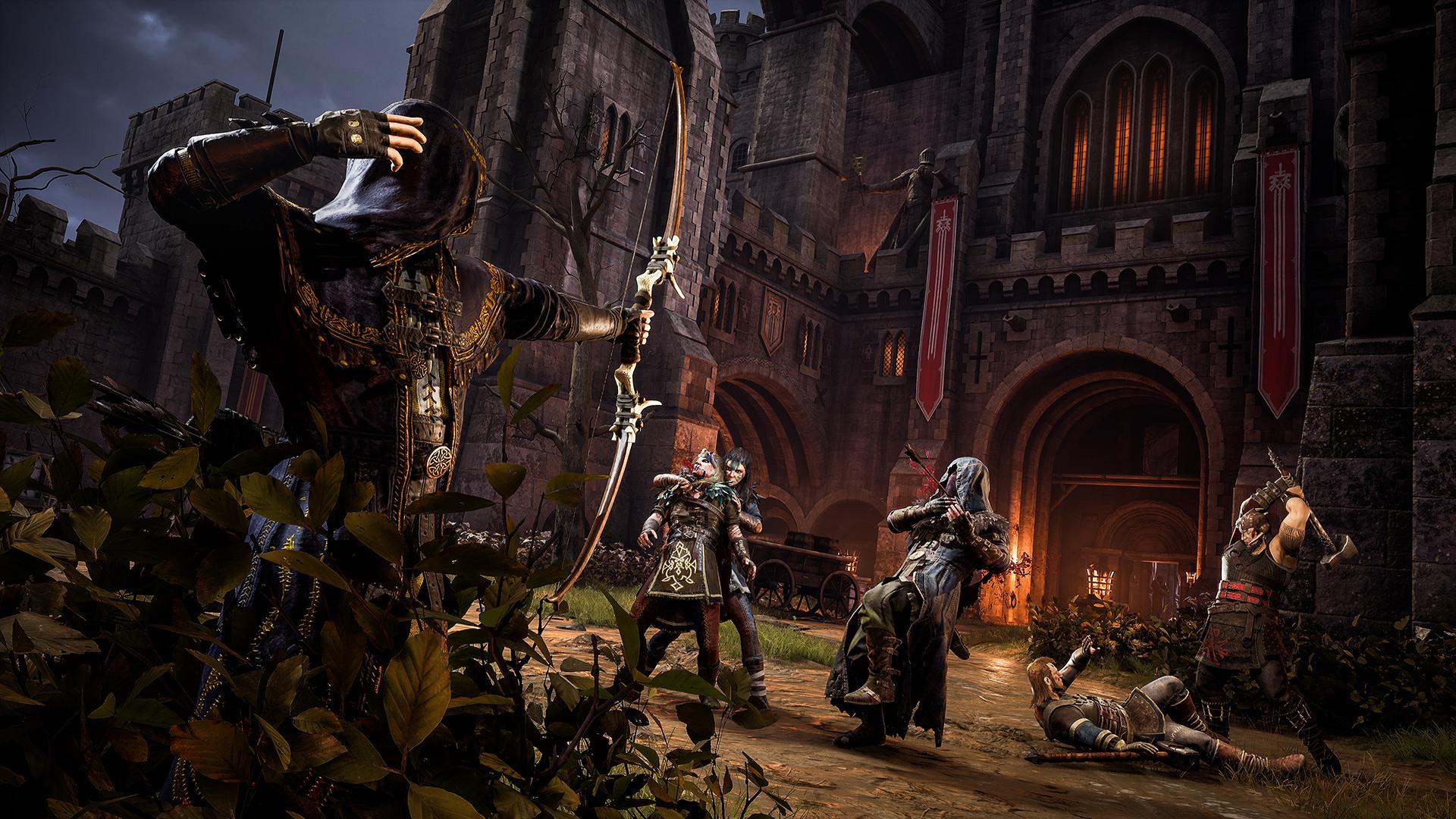 But more than anything, the question that kept rolling around in my mind was “Why?” What is the point of this endless cycle of heists? Hood offers players the option to divide their winnings between their purse and “the people,” but all donating to the poor gets you is a numeric increase on the level of your woodland camp. No people show up at the camp, no new structures appear, just a few new unlocks at menu-driven cosmetics stores. So what is the point of living out the same scenario over and over again? The entire exercise feels hopeless and dire.

I don’t want to completely dismiss Hood as a misfire. There is a core game here that many people seem to be enjoying, and the developers promise that eventually they will add new maps and characters. A season pass is also in the offing. But when the franchise is based on a legend that involves good cheer, merry men and tales of derring-do, I wanted something more than a giant guy exploding heads with a hammer. Less gore, and more fun. I was hoping for Errol Flynn, and Hood gave me Russell Crowe. It’s an okay interpretation, I suppose, but it’s not anything I want to spend a lot of time on.

Hood: Outlaws and Legends brings players into an alternate universe where Robin Hood and his Merry Men are a gang of murderous thieves. While the core heist gameplay loop offers some fun for committed players, the structure around those heists doesn't give much reason (beyond getting better) to keep playing. The thematic darkness doesn't help; when the Sherriff of Nottingham drops f-bombs and smashes people's heads like pumpkins, I kinda tap out.