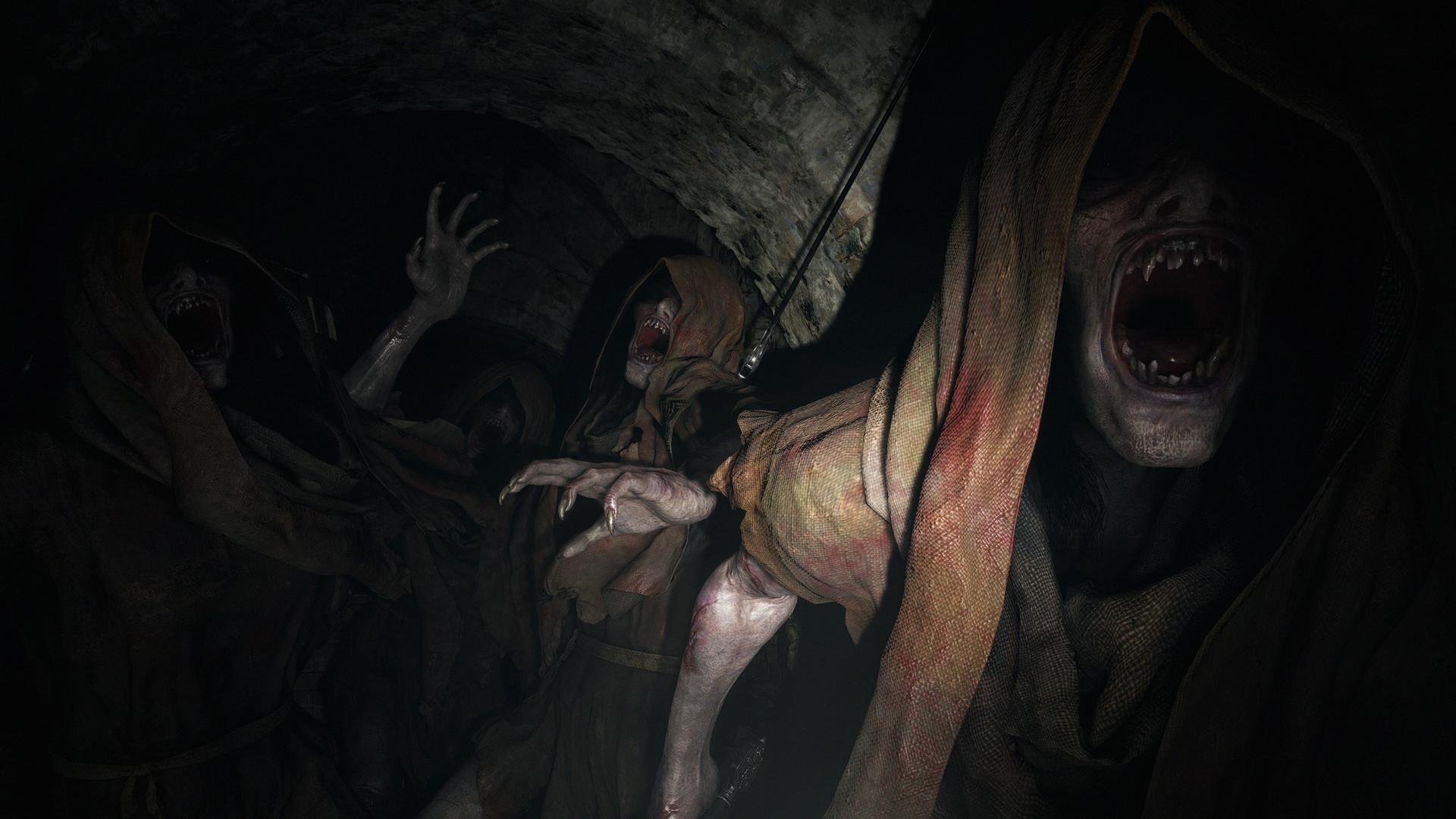 Written by Charlie Coleman on 5/12/2021 for PS4
More On: Resident Evil Village

It was only on March 22 of this year that the Resident Evil franchise enjoyed its silver anniversary (that’s 25 years for any unwed folk). It’s a franchise that has consistently mutated and evolved in order to fend off the greatest monster of all: franchise fatigue. When you take a step back and observe all the ways this series has grown and changed, across various mediums, it really is fascinating. With a franchise this long-running, it’s inevitable that some traditionalists will bemoan a new direction, so it’s imperative that Capcom retain the roots of Resident Evil but continues to evolve over 25 years later. Resident Evil 7 Biohazard introduced us to new protagonist Ethan Winters but also to an entirely new perspective: first-person. Resident Evil Village is a direct continuation from that bold new direction, but shows plenty of ambition on its own. 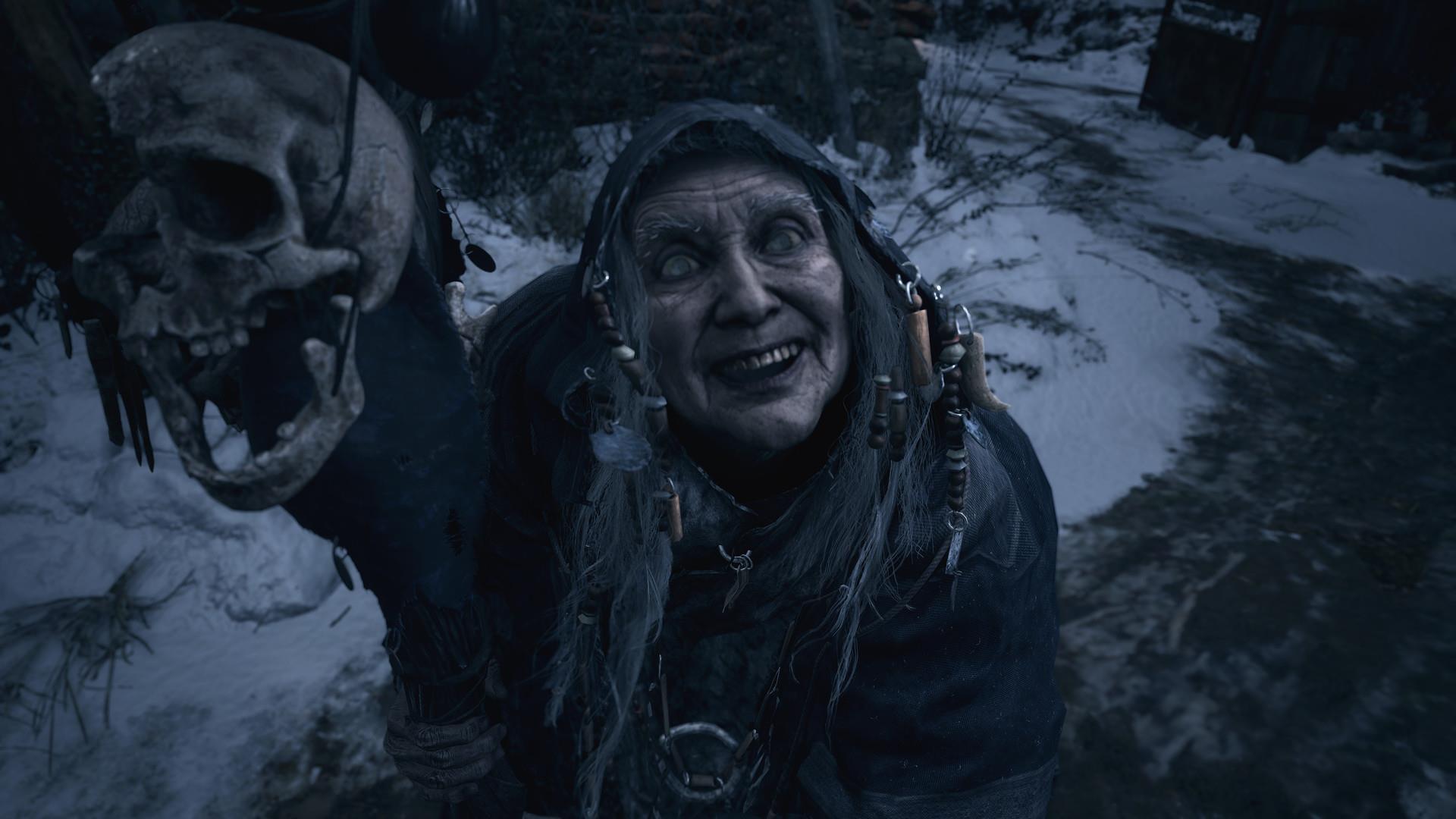 The titular Village makes for the best setting the series has seen since Resident Evil 4. Following on from his encounters with the Baker family, tragedy strikes Ethan Winters yet again. This review won’t delve into spoiler territory but Ethan soon arrives in the village that’s seemingly lost in time. Ethan is a far more fleshed-out and three-dimensional character in Village. Incidentally, I genuinely cannot remember if Ethan even had any lines of dialogue in Resident Evil 7. If he did, they were rare and forgettable. The first hour of Village explores Ethan as a character more than Resident Evil 7 did in its entirety. We see his difficulty communicating with his wife over the events they suffered in the previous game. We see Ethan forming bonds with villagers and shouting profanities at even the most intimidating of foes. 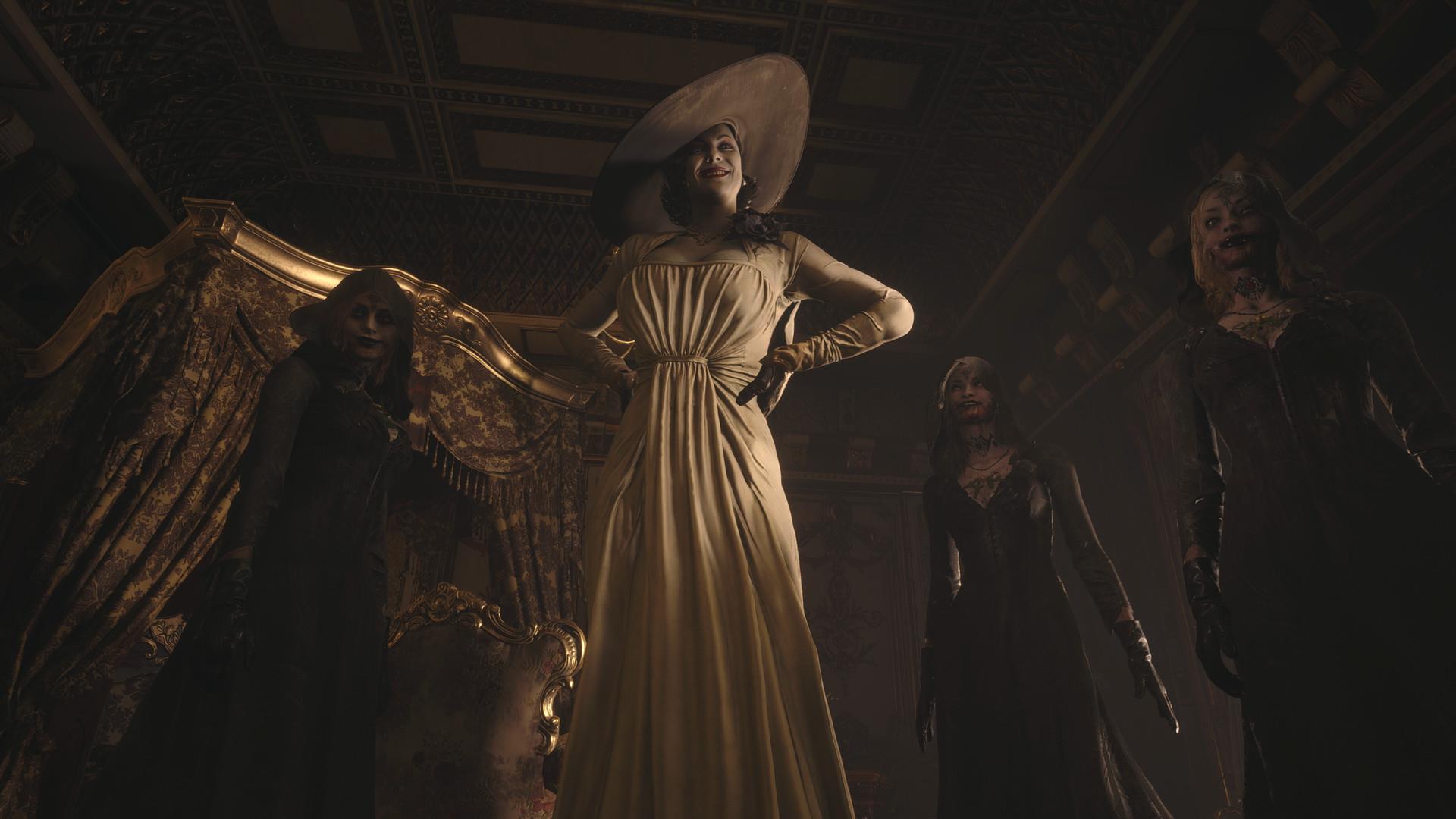 The Village is a more expansive setting for Ethan to explore than the Baker ranch. Unlike Resident Evil 7, but like Leon Kennedy in Resident Evil 4, Ethan gets his hands on a sniper rifle that does come in handy for some of the longer-range encounters that this larger environment permits. Despite the increase in magnitude, Resident Evil Village maintains a meticulous attention to detail in every aspect of its multiple environments. What initially appears as a run-down assortment of abandoned homes soon reveals alternative paths, obscure secrets, hidden treasures, all of which encourages you to venture off the beaten track and explore. Similar to a Metroidvania, there’s plenty of backtracking involved when you discover new tools that allow you to access previously inaccessible areas.

Since she’s already been the focus of social media for the last few months, Lady Dimitrescu makes for an intriguing foe. She’s the first of four lords Ethan comes across and is a Mr. X style enemy that stalks Ethan as he explores Castle Dimitrescu. My only criticism in respect to her character is that there wasn’t enough of her. My guess is Capcom never expected her to become the internet’s obsession the way that she did. If they had, I’m sure she would’ve been given an even greater presence in the game. Alas, she and the Dimitrescu castle are but one of four lords and their abode. The central village serves as a hub of sorts whilst the Dimitrescu castle and the other three houses each feature a distinct tone and atmosphere. Of course, there’s also the returning Chris Redfield in the picture - but the mystery of his actions are figured out through collectables and the game’s denouement. 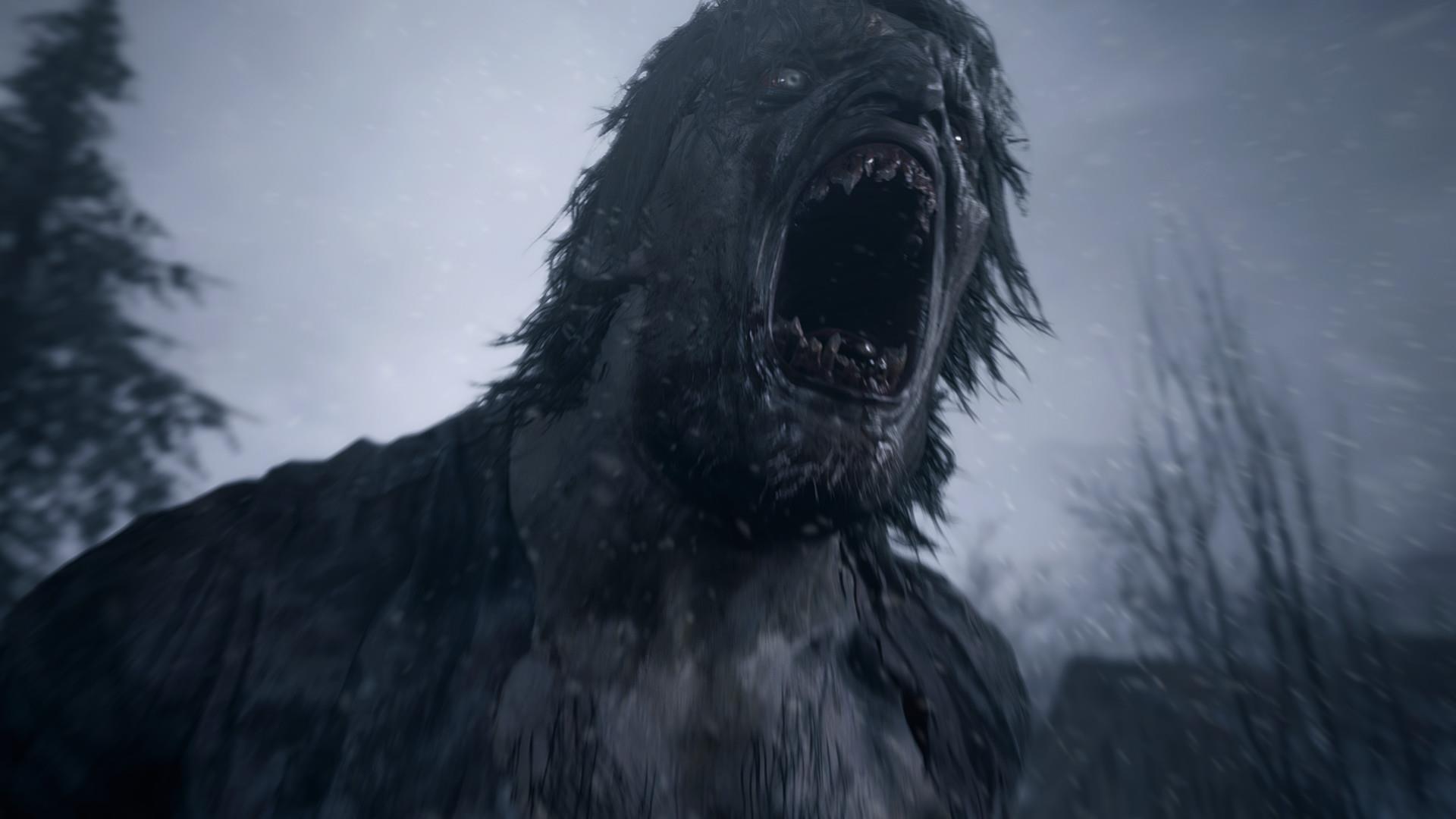 The best way to describe it is that the Village is the amusement park whilst the houses are the thrilling rides. Though there’s not a single thing amusing about the Beneviento house. It’s without a doubt one of the scariest sequences in any horror game I’ve ever played. Now that I've completed the game myself, I can’t wait to watch some of my favourite streamers encounter this section. Generally, these locations are self-contained but sprawling enough to hide secrets and treasures waiting to be uncovered. Every house adopts a different approach to horror or inspiration from different Resident Evil games. Personally, I’m all for this approach. The four houses of the Village, Dimitrescu, Beneviento, Mareau, and Heisenberg are unique; not only as distinct characters and breeds of monsters themselves, but also their abodes. It doesn’t get as distinct as the timeless luxury of the Dimitrescu castle versus the slimy decrepit mines that Mareau resides in.

My playtime lasted around 12 hours on the standard difficulty which felt like a very respectable and well-paced journey through the Village. The story offers twists and turns and adds in a personal and emotional element that carries on what Resident Evil 7 started with Ethan Winters and the well-developed Baker family. Similarly, Resident Evil Village keeps you invested in these characters and seeing the story through to the end. Puzzles are reminiscent of those we saw in Resident Evil 2, with some new fresh ideas too. Overall, they’re not too challenging and I only had to consult a guide on one occasion. Like previous Resident Evil games, Village provides plenty of reasons to play through it multiple times. Challenges and trophies such as knife-only runs or completing the game in under 3 hours which provide plenty of challenge. There’s also the return of the staple Mercenaries mode to consider which adds even more value. 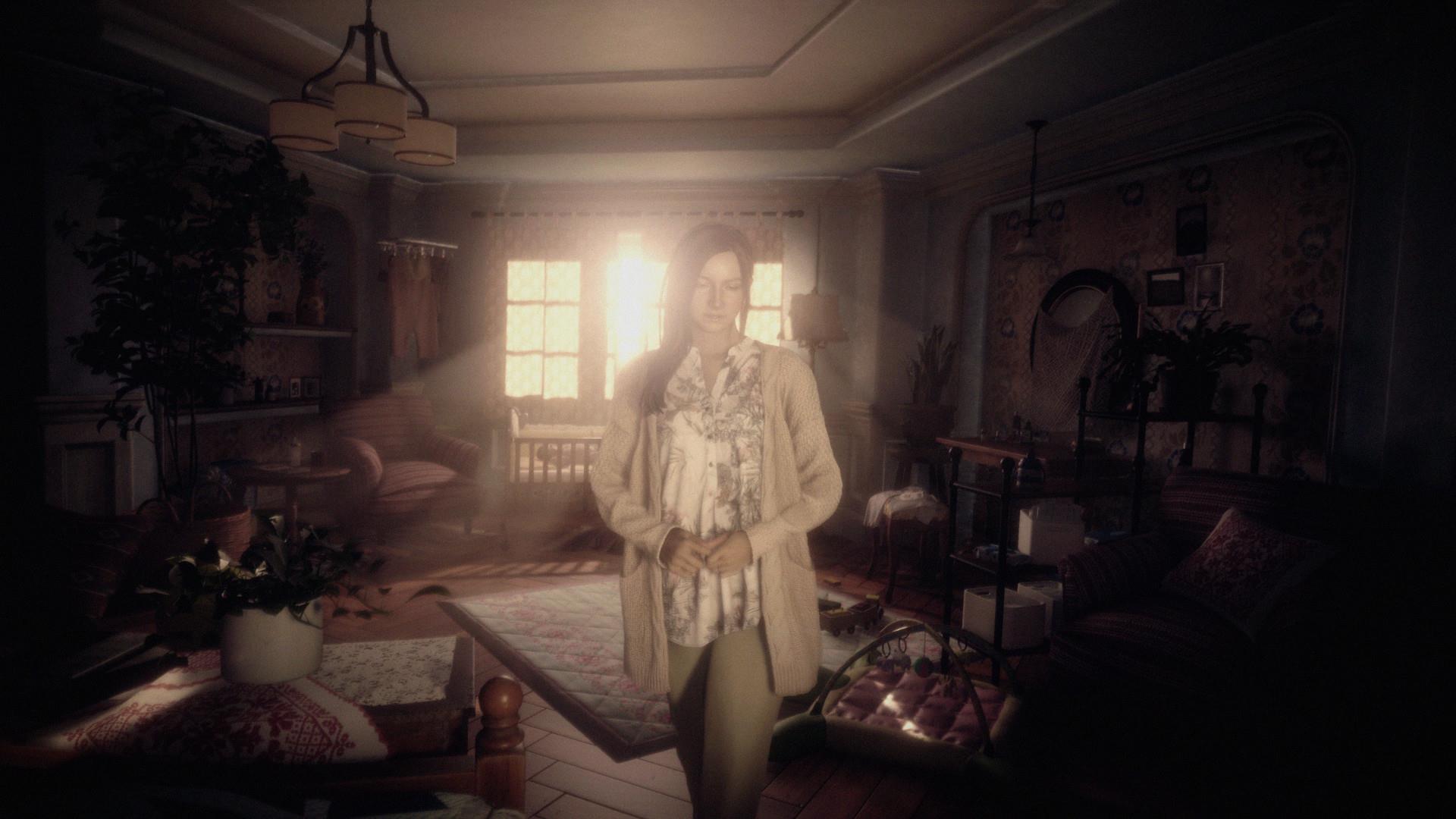 Mercenaries is only available as a bonus game mode after you complete the game at least once. Fans of the series will remember the Mercenaries mode from Resident Evil 4. Mercenaries pits the player against timed waves of incoming enemies in stages which are ever-increasing in difficulty. Players are awarded a rank based on the merits of their performance. Time boosters and power-ups are scattered across the arena to add another element of strategy. Power-ups can range from damage boosters to movement speed boosters. As it stands, there are eight stages in four playable areas but it’s entirely possible that this could be extended in future DLC.

For this review, I played the PS5 version of Resident Evil Village. This version offers unique functionality thanks to DualSense and 3D audio support. Resident Evil Village makes use of the DualSense controller’s adaptive triggers. This requires players to apply a variable amount of torque dependent on what weapon they’re firing. For shooters, this adds to the immersion as every weapon has a unique weightiness. For example, a heavier shotgun requires more torque than a light pistol and you really feel that with the DualSense. 3D audio only increases the sense of immersion. The sounds that an adversary makes are more fleshed out and fill the space in a 3D environment which brings with it an extra level of cognizance that adds to the tension. It’s a more nuanced feature than the DualSense support but it does provide a more immersive and impactful audio experience. 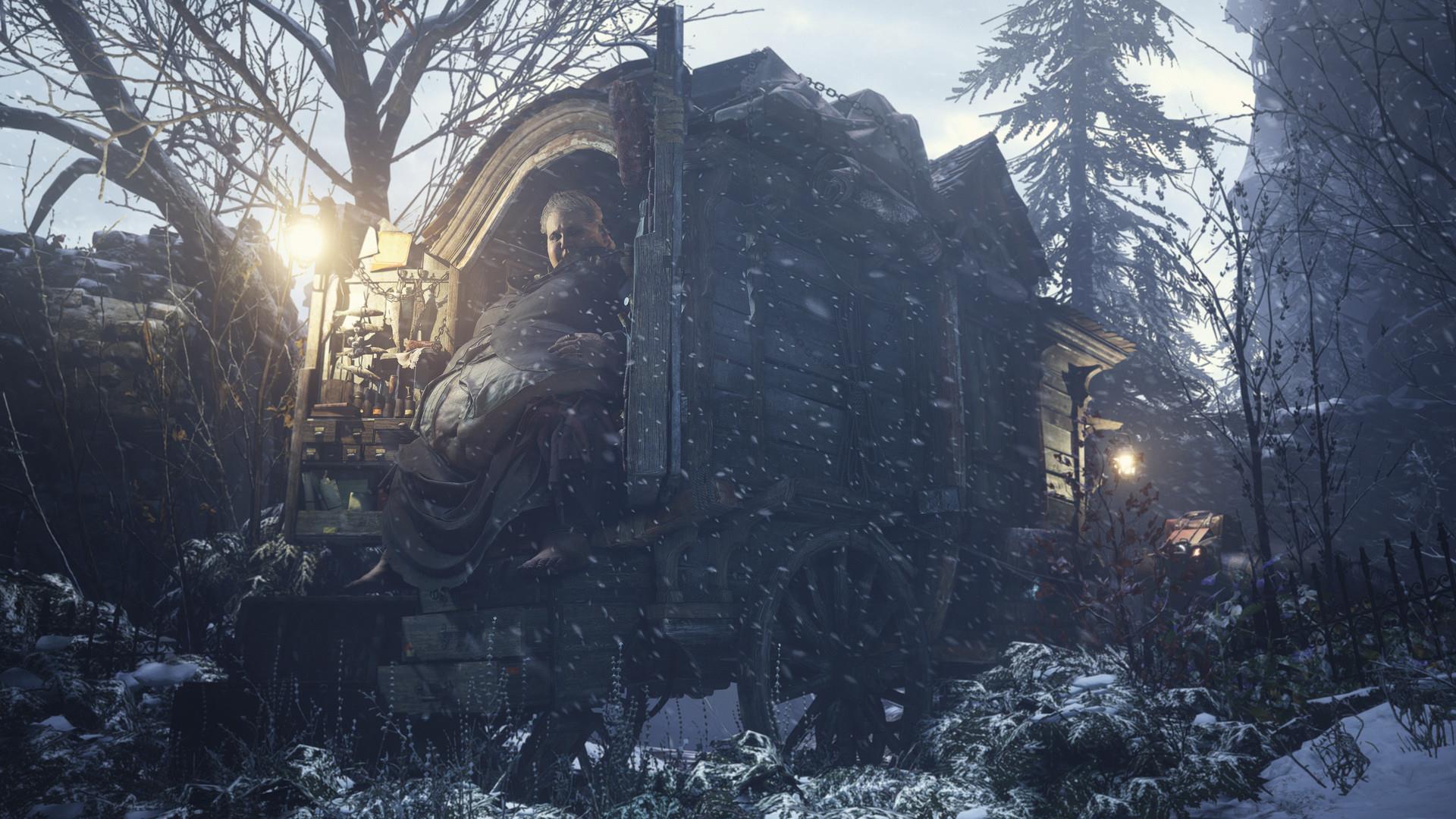 Thanks to the SSD technology in the next-gen consoles, load times are blisteringly fast in Resident Evil Village. A cold boot using the PS5’s unique activity cards means a player can go from dashboard to playing the game in mere seconds. It definitely makes dying less of a problem, and there’ll definitely be plenty of dying especially on higher difficulties. Resident Evil Village supports 4K resolution @ 60FPS and ray-tracing. The result is a spectacular visual presentation that really brings the beautiful art direction to life. Even with ray-tracing on, I rarely noticed the action drop below 60FPS even in intensive scenes. The 4K resolution provides a crisp and clear image that really does demonstrate how far console games have come since the last generation. The marrying of crisp visuals and a gorgeous art style had me popping into photo mode on multiple occasions. Having seen how the game runs on PS4, Capcom’s RE Engine is still doing a marvelous job on the outdated hardware.

For all my beaming praise, there’s also a few minor issues worth noting. For instance, the camera/movement still doesn't feel completely right and it took a fair bit of fiddling in the settings to get something that felt better. On the flip side, however, the awkwardness of control also kind of feels appropriately fitting for the character. After all, Ethan Winters is not a trained badass like Chris Redfield. The fact the controls aren’t snappy and always precise means there’s still a niggling feeling of tension and helplessness when facing adversaries. Crafting is also a bit of a nuisance with items such as herbs, previously only used for crafting medical items, now being used for crafting other items too which means resources will often stretch thin, especially on higher difficulties. 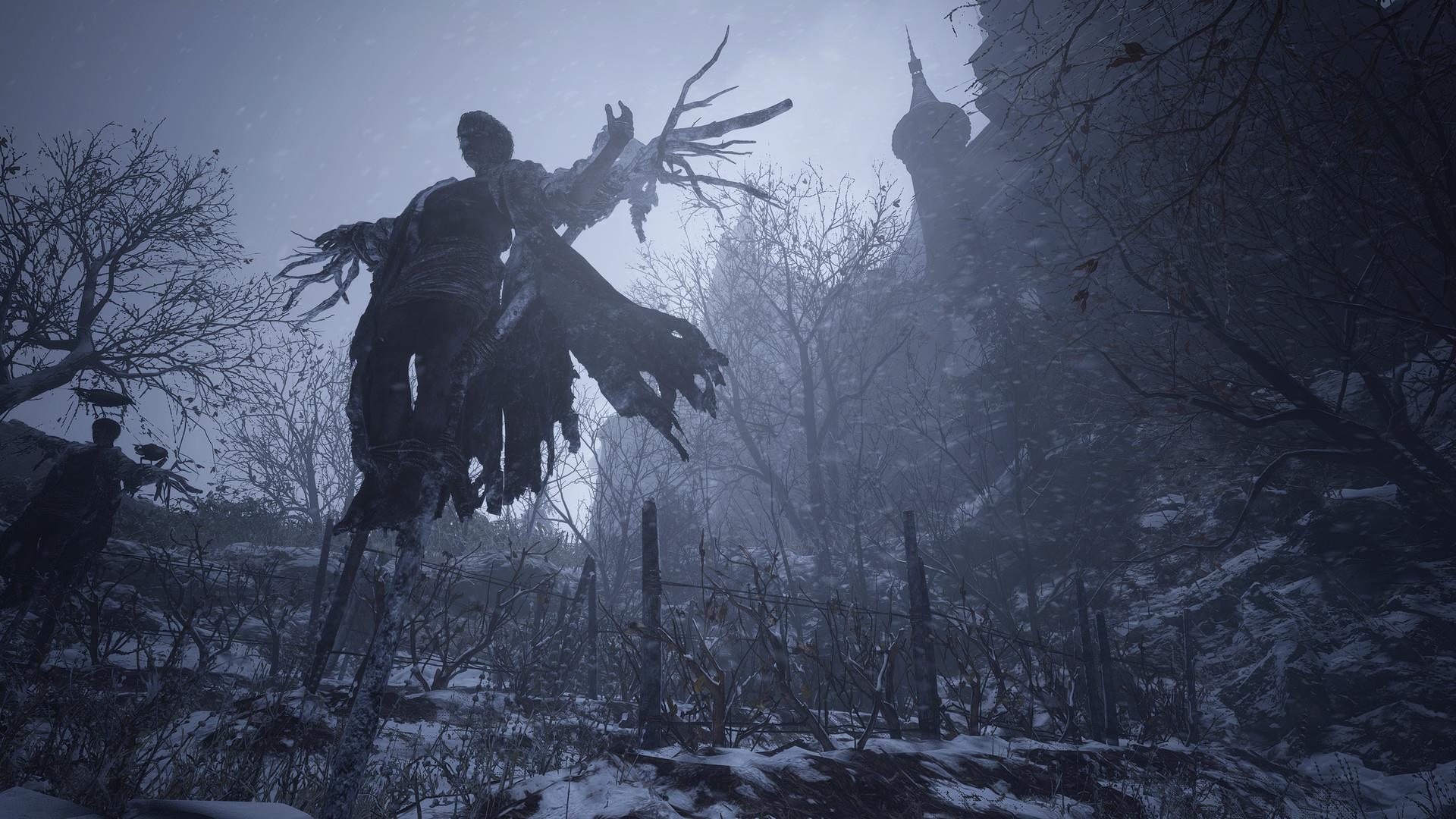