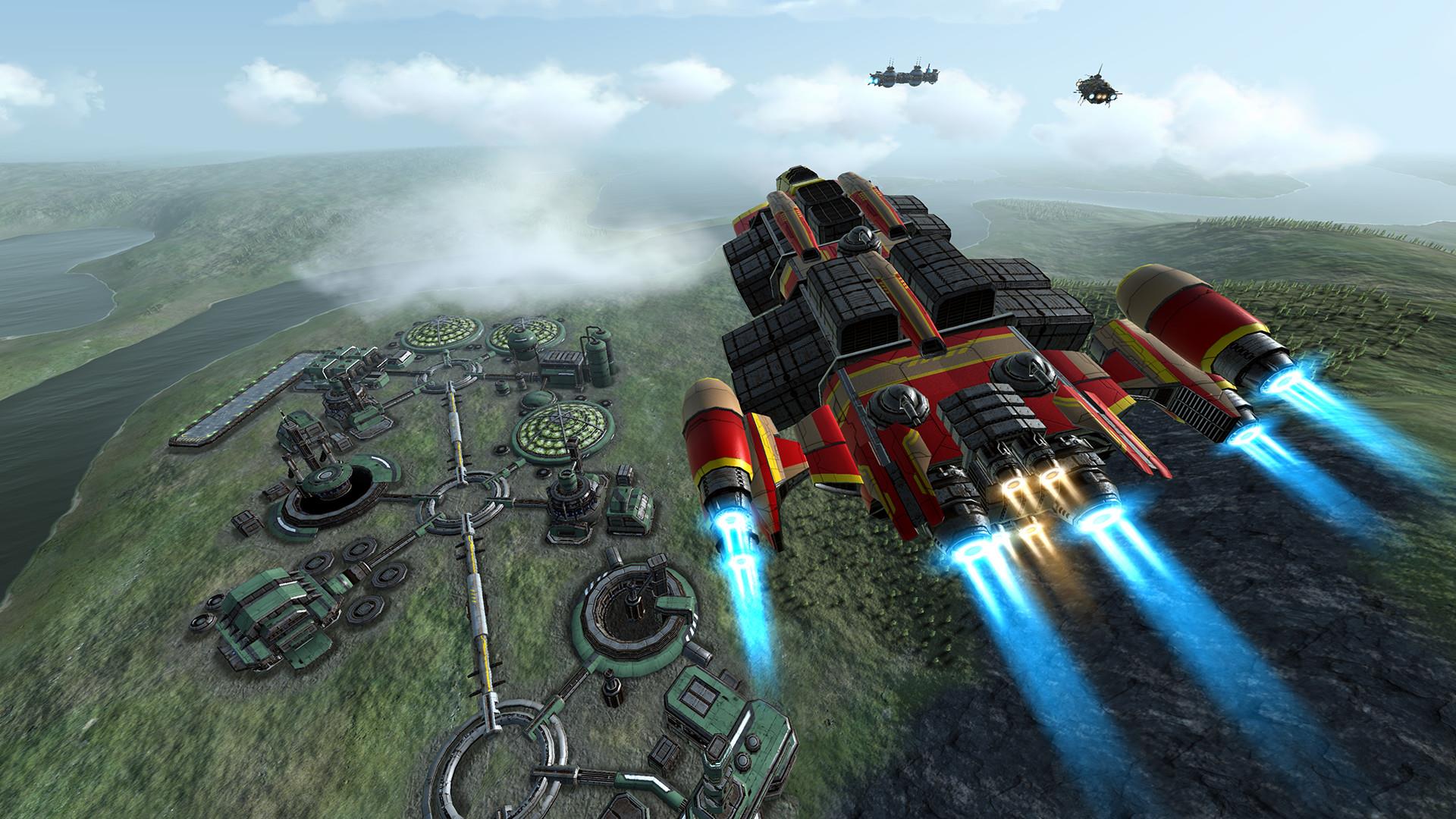 Which is probably for the best, because I’m fairly certain that after spending any amount of time with Space Commander, players won’t exactly be lining up to spend additional money on it. What works in the mobile market does not necessarily make for a good console game, and Space Commander: War and Trade has little to offer console players that will entice them to stick around. 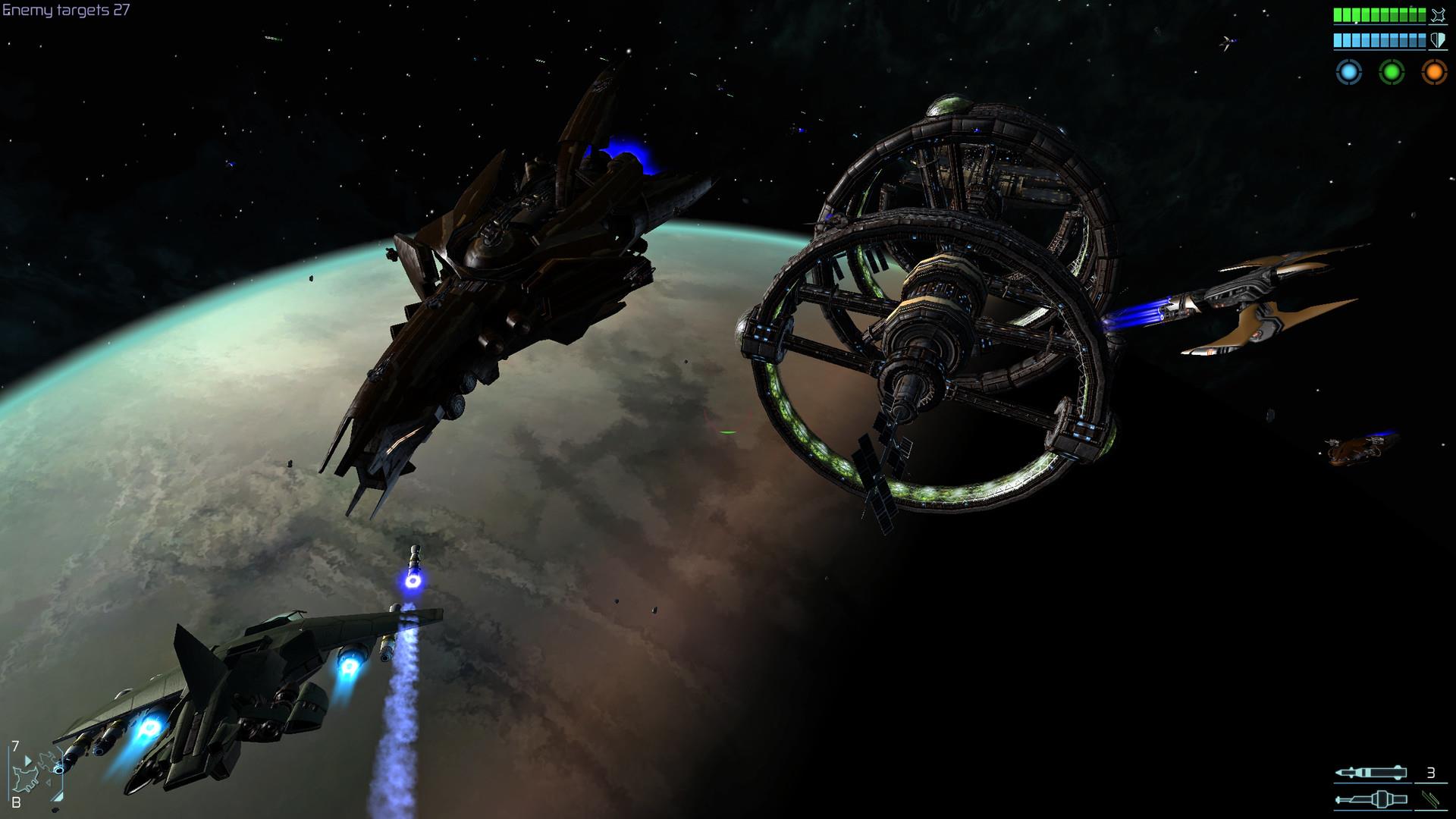 On the surface, Space Commander sounds pretty cool. Players are tasked with building a fleet of ships to take out into the solar system, where bases have sprung up on various planets and moons. Starting with just a basic fighter ship, players engage in missions, moving goods around the solar system and fighting off pirates. A series of story missions introduces the mechanics of the game, but players are able to deviate from that to spend their time trading materials and building up enough cash to expand their fleet and eventually start buying up some of those bases.

Before long, players will have a number of different ships at their disposal. Interceptors are light, weapons-heavy vessels great for taking out swarming enemies. Bombers fire missiles to take down gigantic capital ships. Freighters are used to haul goods around, making money to keep the rest of the fleet afloat. The ship designs are all pretty cool, and the game allows you to slap a coat of paint on them to customize your fleet and make it feel a little more personal. 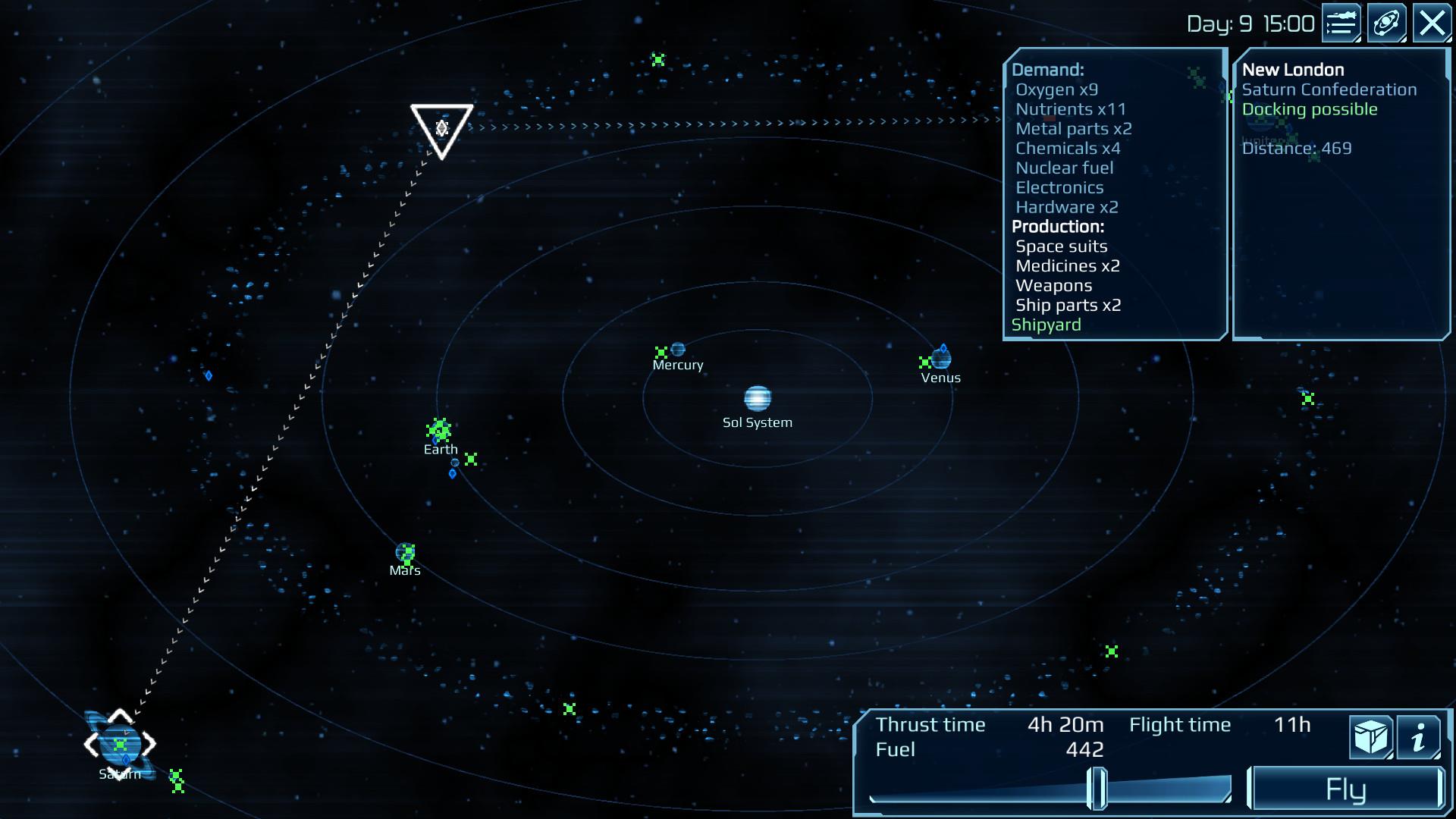 The way this game is structured is unique and kind of bizarre. There are two primary modes in Space Commander: flight and menus. The player has access to a large map of the solar system with about 25 bases scattered between the planets. You pick one you want to go to, and click on it (if you can get the curser to go where you want; the map controls are incredibly fiddly). You can then set your speed, which will impact your fuel consumption. But the speed you choose doesn’t really matter in any practical way, because as soon as you click the Fly button, you instantly arrive at your destination.

Once there, you get to fly around aimlessly, admiring the nice design of the somewhat same-y outposts and space stations, before clicking a button to instantly dock. You are then free to play with menus for as long as you desire. In these menus, you can upgrade, buy, and sell ships, buy goods to haul to a different station, sell goods that you have brought with you, and read your email about new places you can visit with the click of a button. 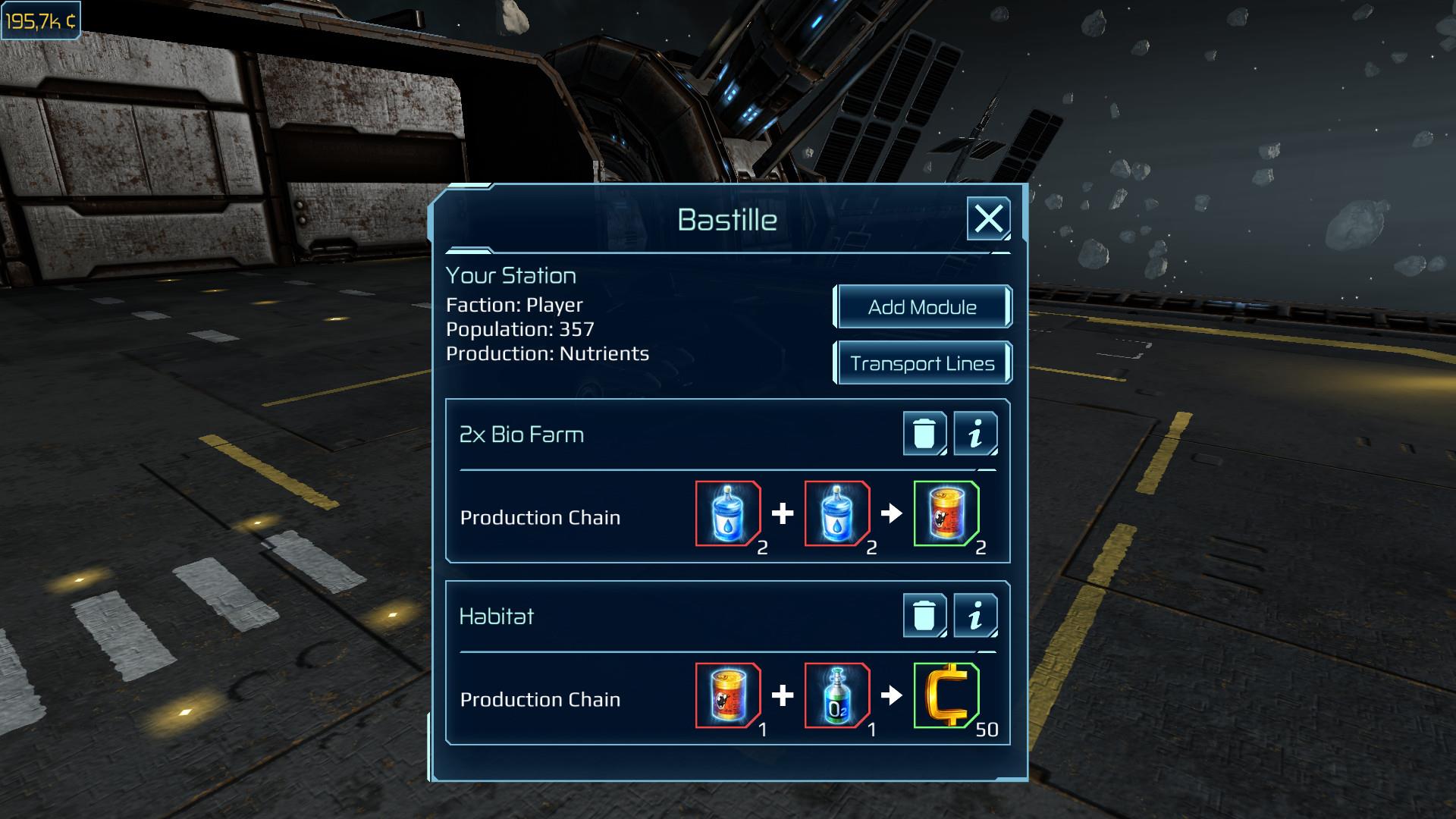 Trading is hysterically simple and quick – reminding me for all the world of something I would have played back in the Commodore 64 days. You often receive emails that tell you that certain bases will pay a premium for a particular good. Buy that good with the click of a button, and instantly haul it to the correct destination, and you will soon be rolling in the cash. Other missions are available to earn cash, but this one is so lucrative that there is little reason to engage in the provided escort missions or prisoner transfers. Before long (maybe a couple of hours of focused trading), you can buy individual bases, and start them automatically producing goods.

At that point you can go nuts and build out your fleet, but I found there was little point to having more than three or four ships. Players can only fly one ship at a time on a mission, but the way this is implemented speaks to the many strange design choices in Space Commander. 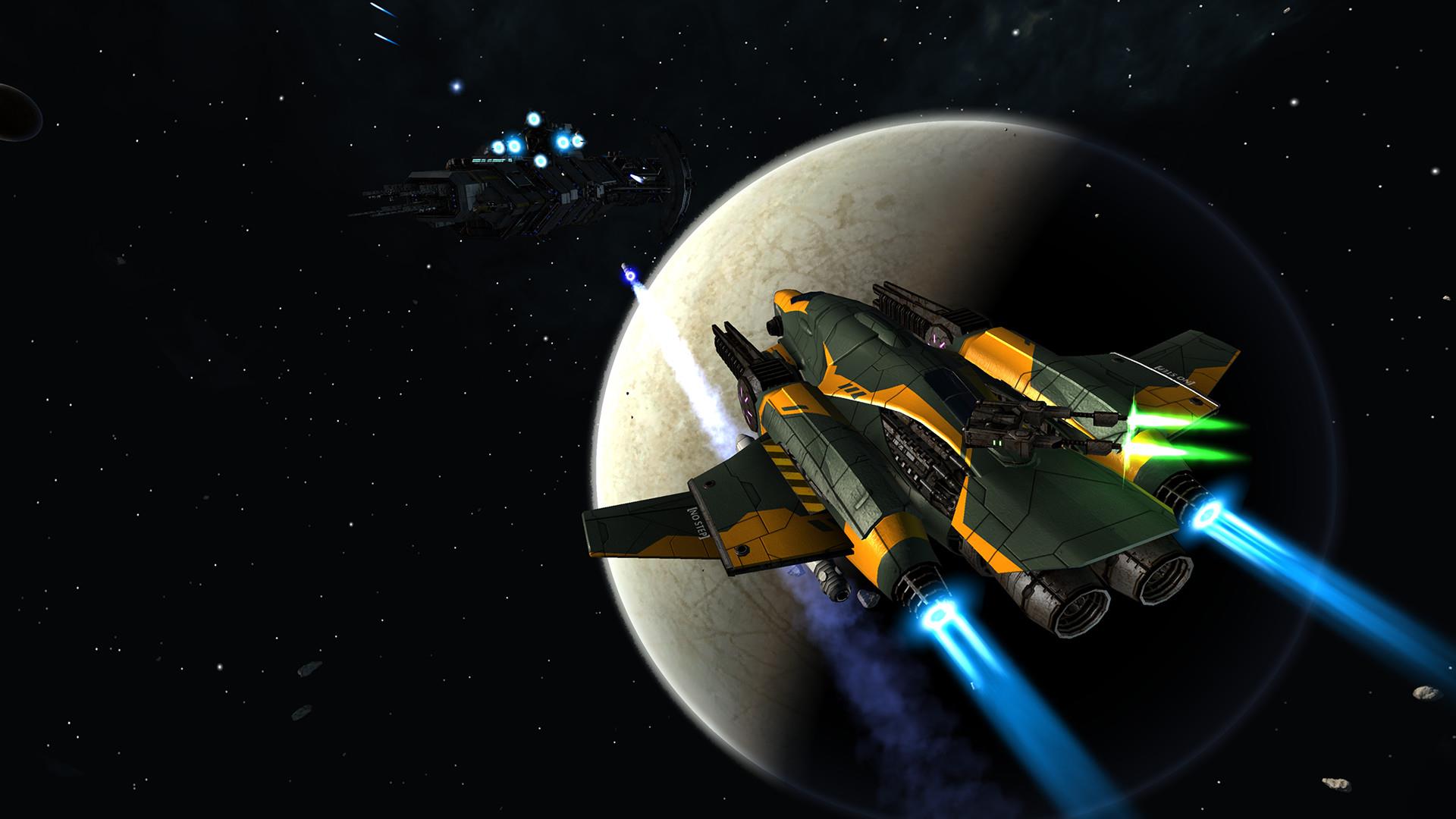 Players can build as large a fleet as they like, but after spending a few hours with Space Commander: War and Trade, it quickly becomes apparent that having too many ships just creates a financial drain that is less than optimal. While the game never quite comes out and says “limit your number of ships,” it quietly punishes the player for having too many in several ways.

Players have the option to either park a ship at a base and pay a rental fee to keep it there, or drag it with you everywhere you go, which means you have to pay for fuel. The entire setup is weird, and not terribly well explained. While you can only see one ship at a time, all of the rest of your ships magically accompany you on your trips between the planets. This is convenient in some ways. If you are having trouble completing a mission with a certain type of ship, you can dip out of the mission at any point, jaunt over to a nearby base, and return with a different ship to mop up. 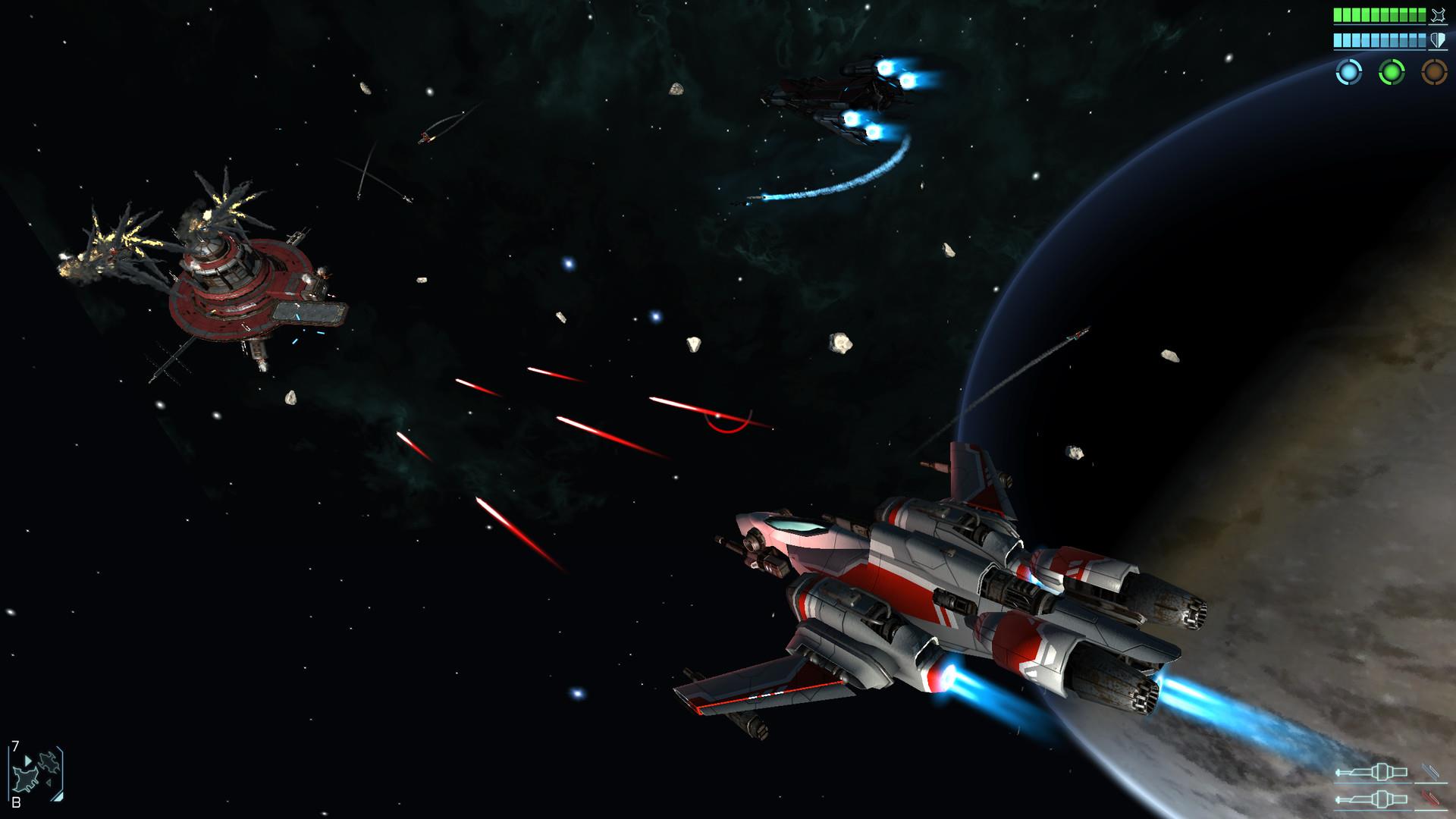 This, of course, takes any suspense or need for skill out of the already basic combat system. If your ship is getting shot up, you can literally warp away from the middle of a dogfight and get your ship repaired, then return to continue the battle. Not that players will have much trouble with battles, once they figure out the basic “lock on, use one weapon to destroy shields, use the other to blow up ships, bring in the bomber for the capital ship” flow that every single battle uses. Battles are locked onto a flat plane, a slice of space that will not allow players to flip, barrel roll, or use verticality to their advantage in any way. Much of what makes space battles fun in video games has been excised here, including the need for any real prowess to succeed.

There is nothing inherently broken about Space Commander: War and Trade. But the overall flow of the game’s systems is so simple and repetitive that I can’t see any but the most committed players sticking with it. The only challenge is realizing that one has to keep making enough money to support the costs of the campaign missions. After that, Space Commander: War and Trade devolves into halfheartedly clicking buttons until the game is over.

Space Commander: War and Trade makes the transition from mobile to console without considering what changes would make the game more palatable for console players. A very basic trading system, a fiddly map, and super simple space combat all add up to an experience that underwhelms. There is a lot going on in Space Commander, but not very much of it is fun.