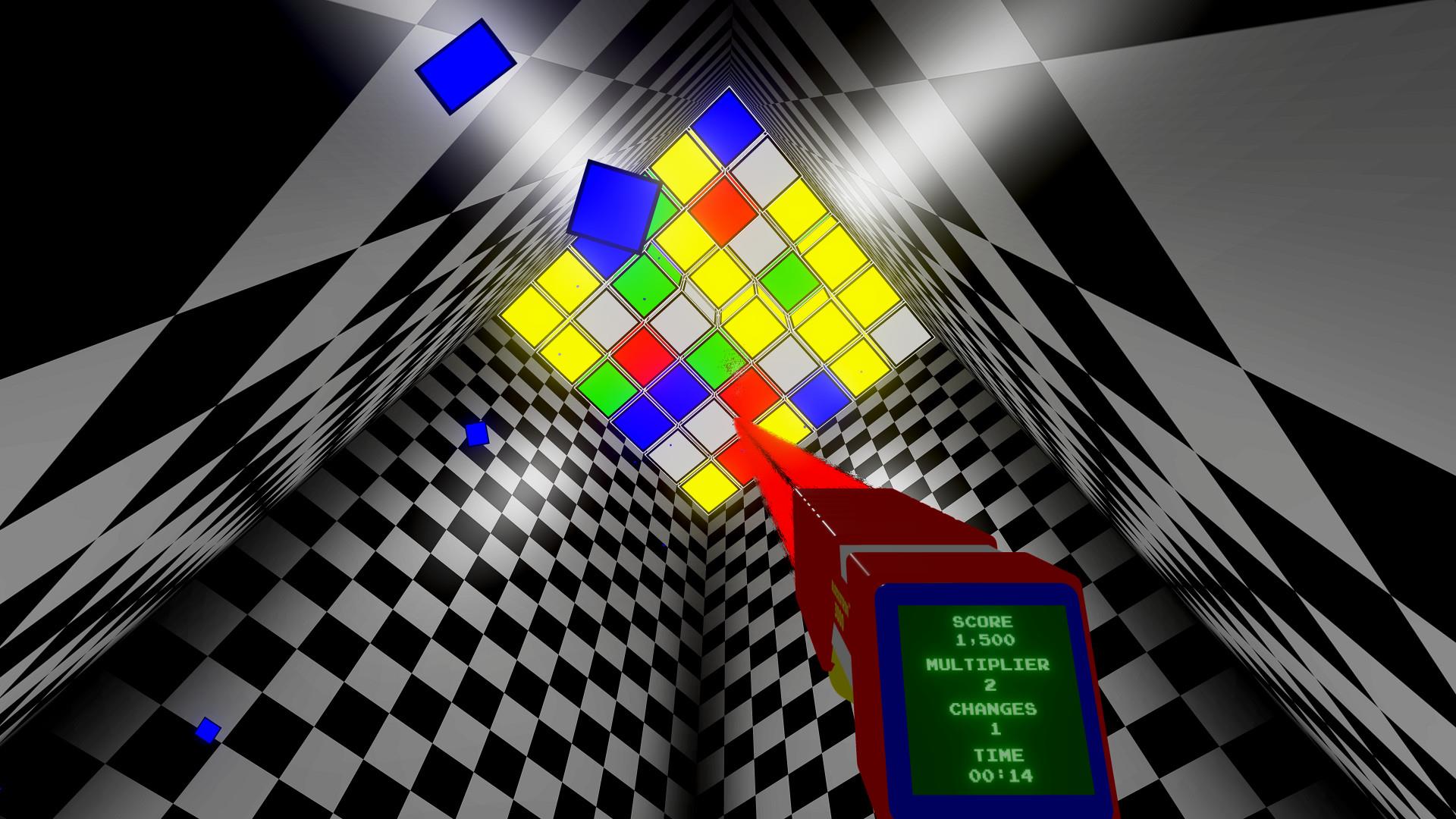 You’ve probably had the dream. After playing hours of Tetris, you find yourself in a blocky landscape, desperately trying to match full lines to keep yourself from getting crushed. Or maybe you’ve felt the brightly colored bubbles of Puzzle Bobble bearing down on you while you squirmed around, blasting away to save yourself from being absorbed. Perhaps you’ve gobbled bon-bons like a demented Lucille Ball to keep from getting crushed by candy (admittedly, I don’t know much about Candy Crush). Whatever your personal kink is, you get the idea. You play too long, the game sends insidious tendrils into your mind, and your slumbering brain then tortures you for failing to disengage before bed. 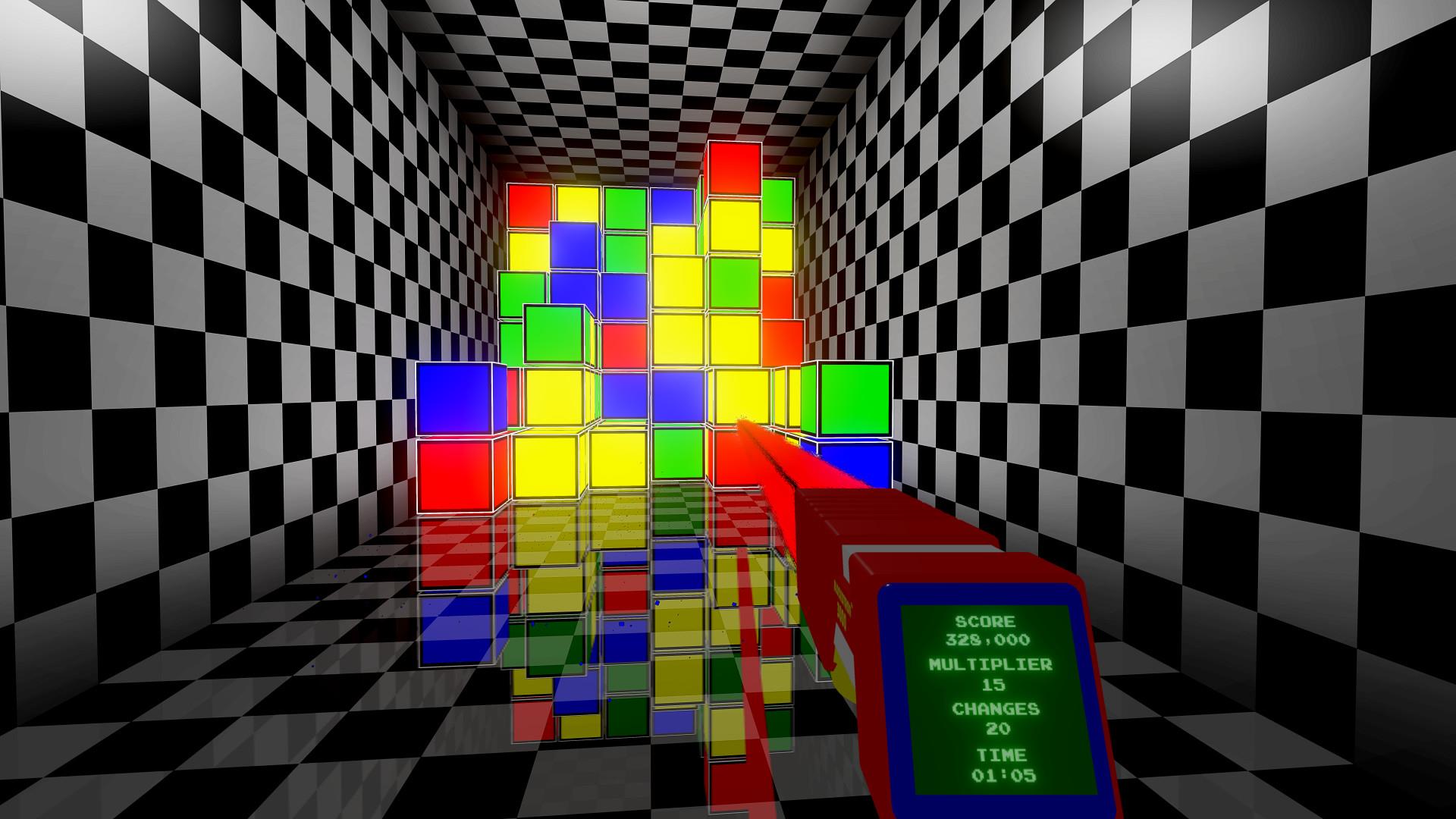 Boxed In, the new PS VR game from Red Chain Games, harnesses all of that puzzle-game anxiety and makes it real—or at least real-ish. The trick to Boxed In is that the game places the player physically among the puzzle pieces. This gives the puzzle mechanics a hideous, delicious immediacy, because keeping the puzzle going is a matter of life and death.

In Boxed In’s purest, default form, the player stands at one end of a long hallway. A wall of multicolored boxes starts slowly creeping towards the player. The player has a laser that rotates through colors that match the box colors. Point the laser at the side of a box and pull the trigger, and you can either change the color of a cube, or create a new box of the appropriate color. The red laser makes a red box, then the laser changes to blue, and you make a blue box, and so forth. If you put three of the same color boxes in a row, they disappear along with any boxes of the same color that happen to be touching them, and any boxes on top of them fall to take their place. 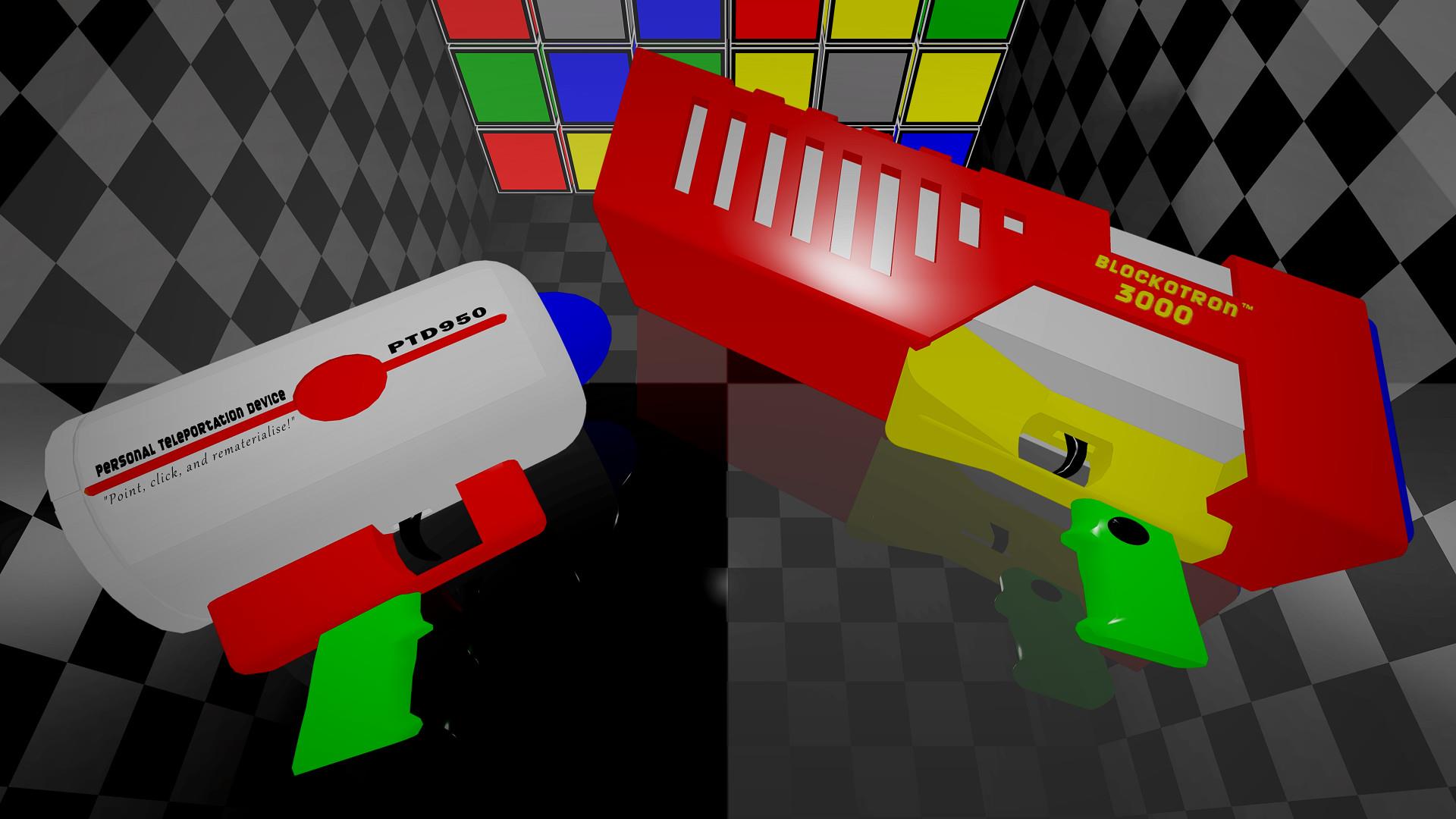 The puzzle elements—while difficult to describe—can be instantly grasped as soon as the game boots up for the first time. But what isn’t readily apparent is the sheer panic that Boxed In induces, as the looming tower of boxes slides ever closer to you and you frantically seek matches to knock the wall back and keep yourself from getting squished. You actually slide backwards along the floor, as the puzzle pushes you to your doom.

Oh, but it gets worse, because Boxed In gives you options. Not only can you stand at the end of the hallway with the boxes sliding towards you, you can also stand on the floor with boxes descending slowly from the ceiling like some deadly Skittle-colored Indiana Jones trap. Or, if you are up for a super challenging time, you can choose to have the boxes rise from the floor beneath you. I did not really understand the repercussions of playing this way, until I knocked out a big swath of boxes and then fell into the hole I had just created. Suddenly I was down in a rainbow pit, surrounded by boxes and playing the game from a completely new perspective.

It was that moment that broke open the blocker in my mind, and I realized that movement could be a part of this experience. I had been positioning myself at the furthest point, and futilely attempting to keep the boxes from reaching me. But when I realized that I could actually create holes and run into the puzzle, zapping boxes from behind, an entire new world of strategy opened up to me.

Beyond the origin point of the wall of doom, Boxed In gives the player a pile of other options to customize their experience. If a puzzle with three colors is too easy, choose to battle against four or even five colors. Don’t want to play in VR? It’s cool, Boxed In works flat, so you can play on your TV. Can’t stand the heart-pounding action? You can turn off the movement of the wall, and just try to clear a full room of boxes in Solitaire mode, which can be surprisingly relaxing and fun. 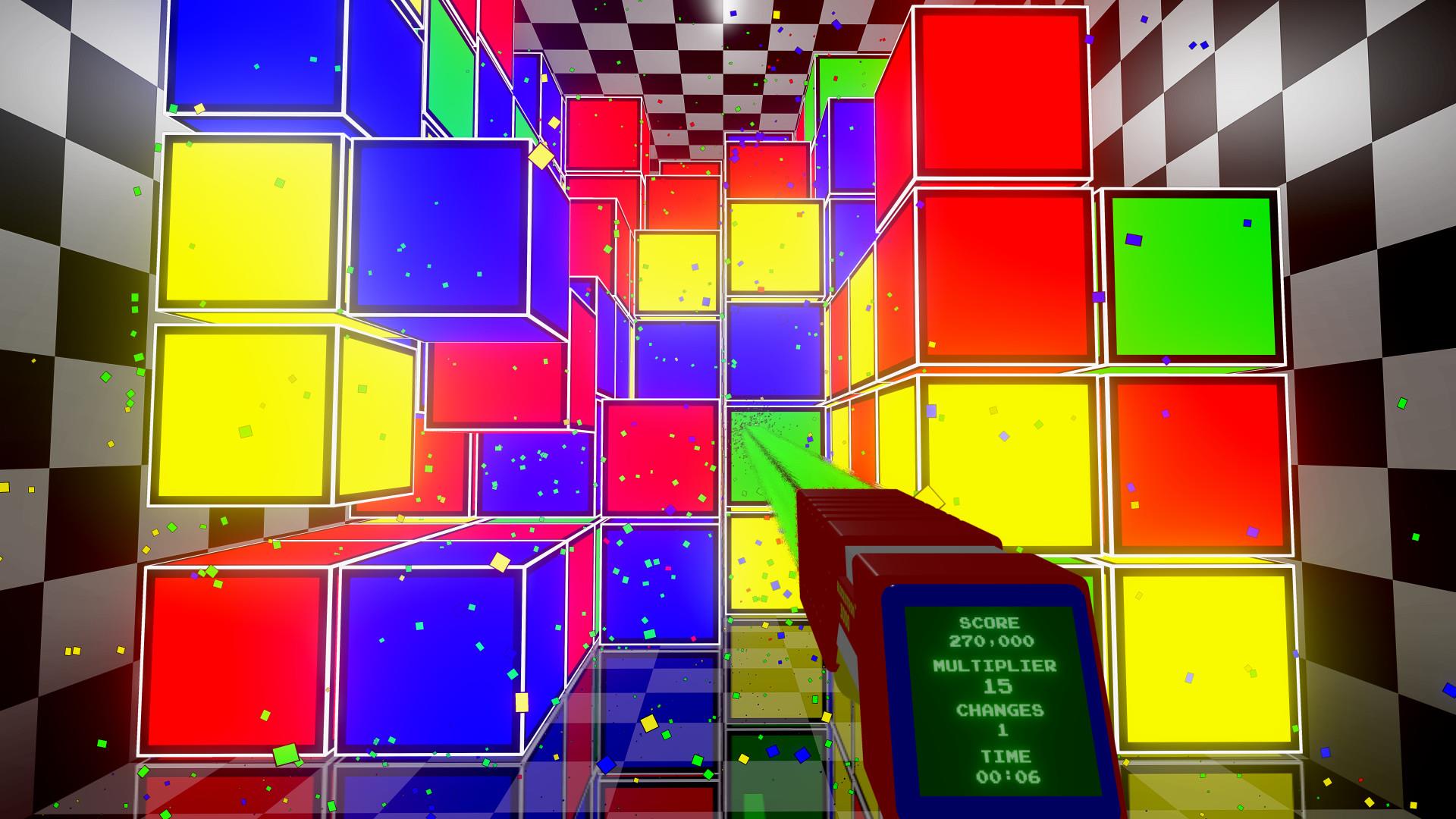 There are so many ways you can tailor your experience in Boxed In that you could play for hours and still not try every variation. Hilariously, the game awards trophies for each permutation. (“Okay, so you did four colors, from the ceiling, puzzle mode. Here’s a trophy!”) I was shocked when I got into the game to see that there are also individual leaderboards for each possible way to play. Want to be the world champion of five-color/from-the-floor mode? You can do that.

The fact that Boxed In was made by a two-man team shows a bit around the edges. This is a team that definitely prioritized function over form, giving the player tons of modes and options at the expense of flashy menus and tutorials. But frankly, the game doesn’t need all that stuff. When your back is up against the wall, the boxes are sliding towards you, and the music is ratcheting up ever louder, who gives a crap about fancy menus? You just want to survive. 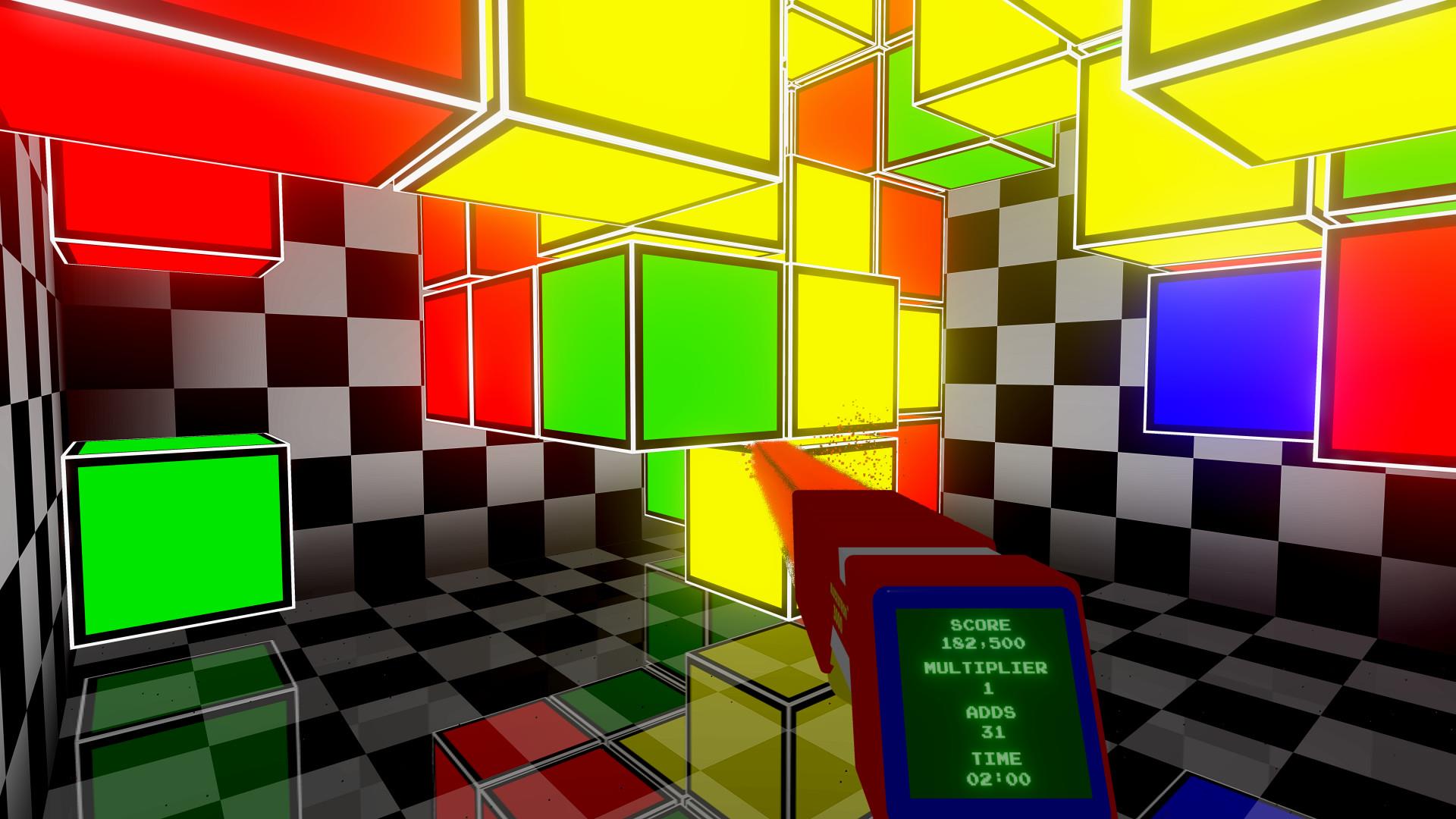 And that’s the difference between Boxed In and other puzzle games. The stakes feel immediate and real. If you don’t stop the flow of boxes, you are going to get pushed right through the wall and into…well, I’ll let you discover that answer on your own. But the point is that every time things started going south and I found myself cornered like Luke Skywalker in that trash compactor, I had an honest, emotional reaction. I was hollering at the game, yelling out colors as I placed them, cursing the rotation for not giving me just one more green, damn it.

And of course—the true sign of success—when I died, I immediately wanted to go just one more time. And then again. And again. Every time the game ended, I would say out loud, “That was nonsense. I can do better.” And it turned out that most of the time, I could. 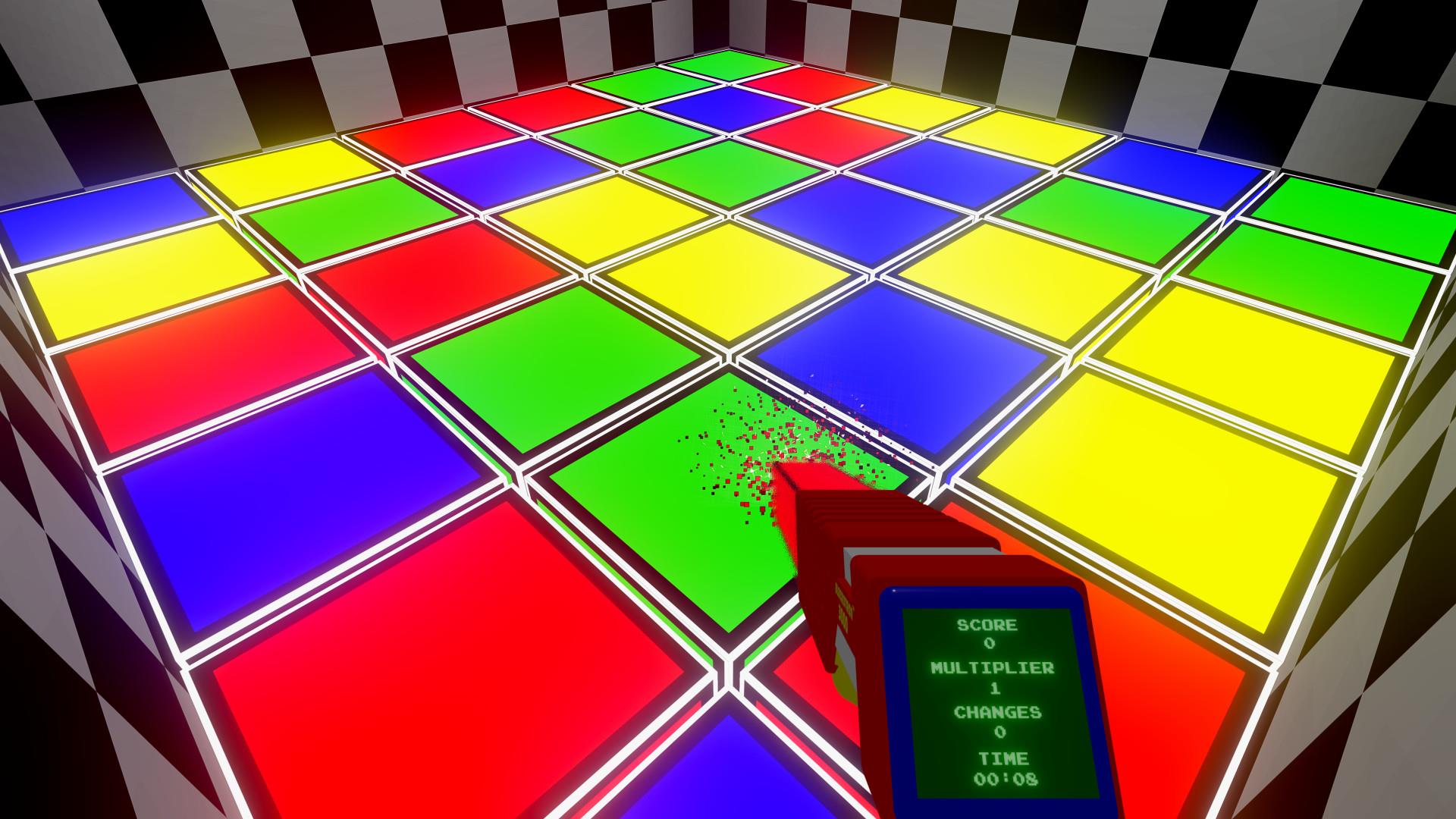 I would urge anyone with six bucks and a love for video games to give Boxed In a shot. It is one of the purest games I have played: video game goodness distilled down to its barest core. The developers decided to give the player more to actually play instead of investing in bells and whistles, and that seems like the absolute best choice. Don’t be put off by the low price or the fact that the artwork and the UI seem a bit “budget.” Boxed In is a stone-cold addictive blast, and probably the best six-dollar new release you could ever hope to buy.

By making puzzle mechanics feel immediate and dangerous, Boxed In elevates the genre. While the edges feel a bit rough, the core gameplay mechanic is pure gold, giving Boxed In that much desired one-more-try factor. Highly recommended for immediate purchase.