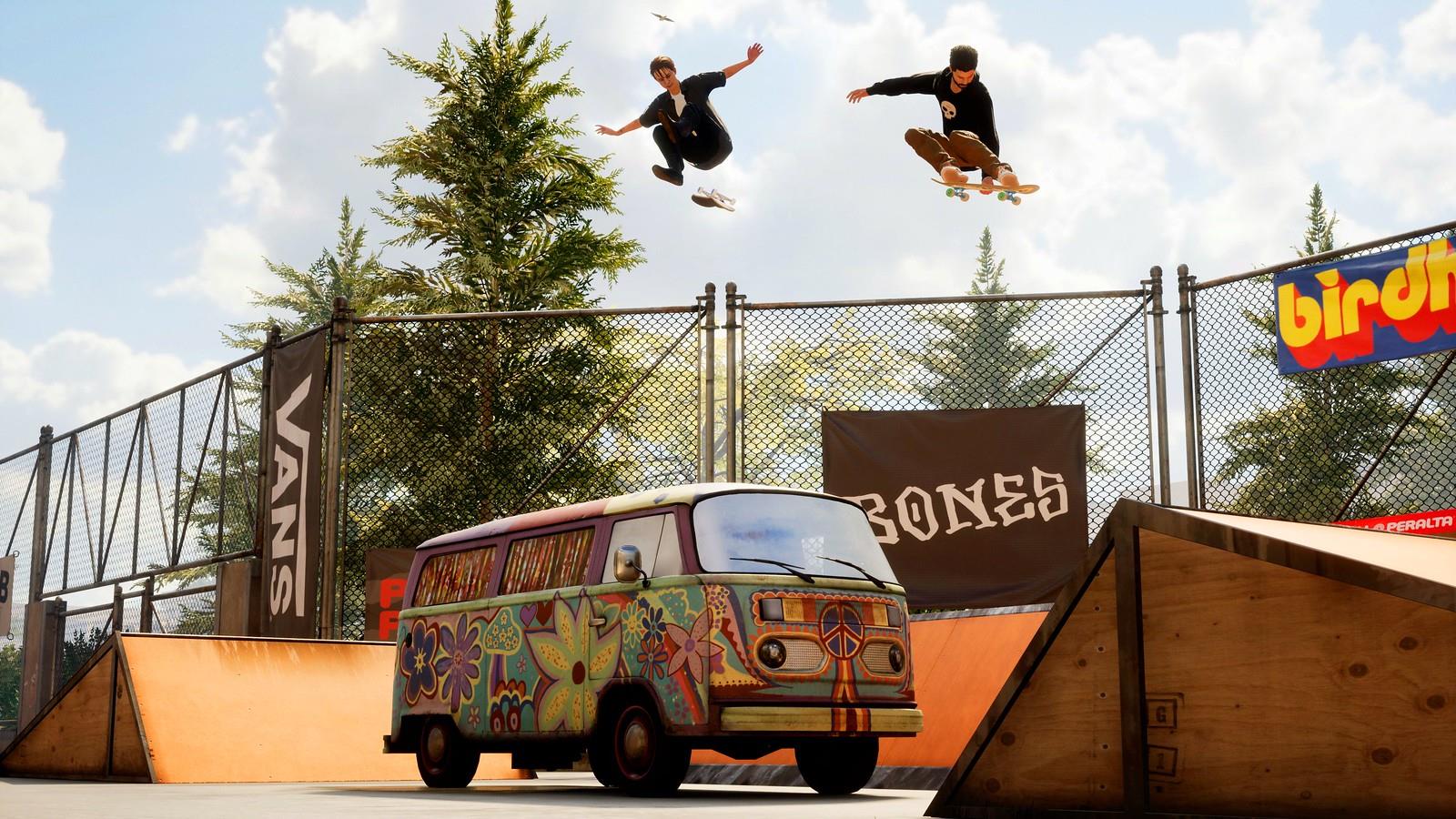 Hol up a minute. Do yourself the same favor I did while writing this piece and load the tracklist up to listen to while reading. Then thank me later: https://open.spotify.com/playlist/37i9dQZF1DX6F6y6vVLZ8H

The review code came in from Activision and Neversoft and the only real ask at the onset was: “Check out the improved graphics for PS5 and write up what you think.” I hesitated for a moment to even take it on with my review slate full, but U-turned almost immediately when I couldn’t get the opportunity to jog back in time out of my head. I just kept thinking of how much daggum fun I had playing the Tony Hawk series over 20 years ago on its first release. I had played Tony Hawk’s Pro Skater 1 + 2 as separate games on PlayStation. But I think my most fervent memories were from Tony Hawk 3 on PS2. 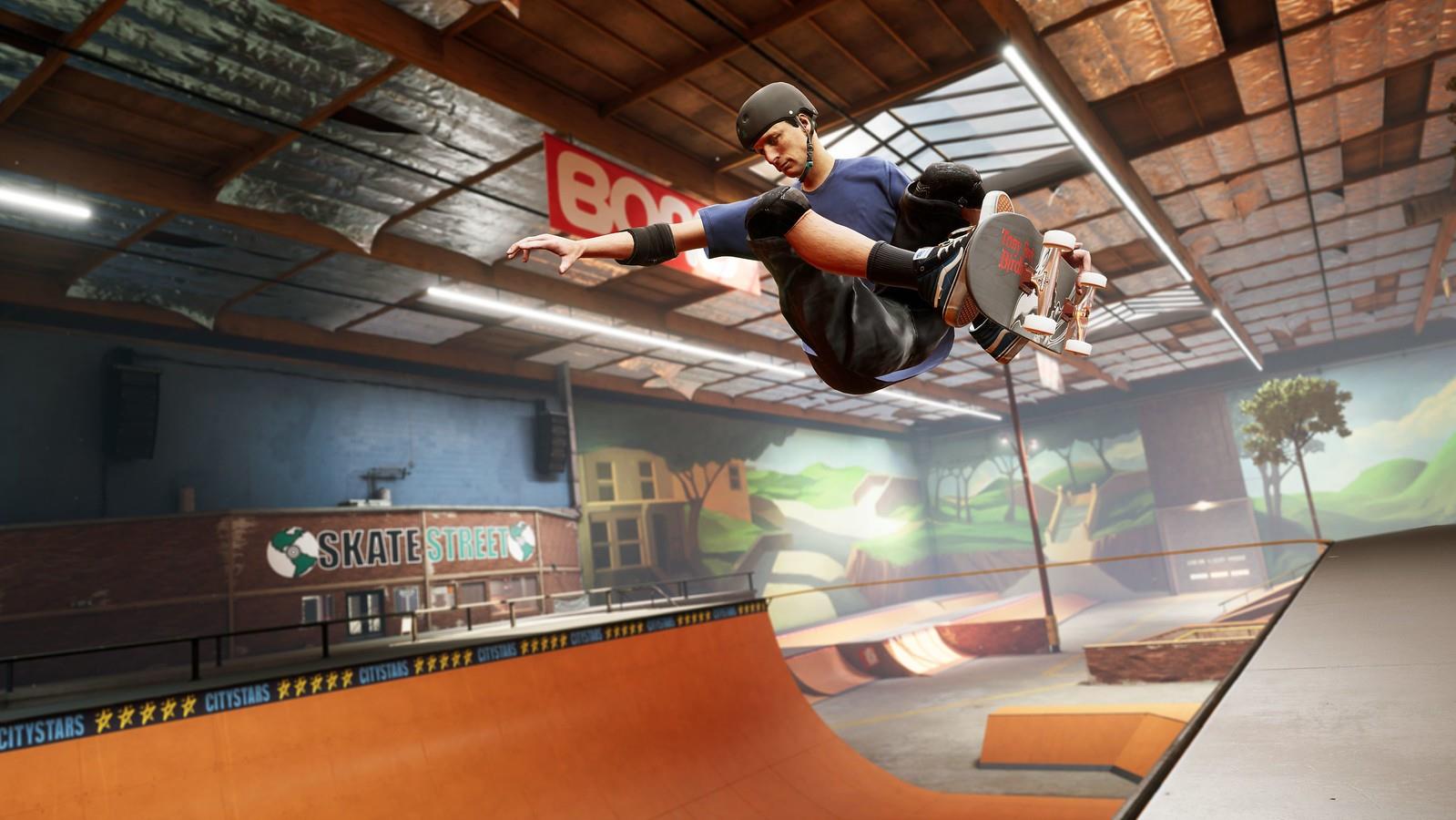 There was a time I was in between jobs; living in what basically amounted to a fraternity house of 12 dudes in a four-bedroom place in Fort Collins, Colorado (despite none of us ever having anything to do with fraternities at any point in our lives); literally dumpster diving at night (not for food but for fun); and wasting away the days either rock climbing, snowboarding, or playing Tony Hawk. It was a bit of a magical time living out my early 20's in an unheated garage through the Colorado winter, cozy in my -20 degree sleeping bag because when you’re trying to fit 12 guys into four bedrooms you can’t all get actual rooms. I have so many memories of that season, from Big City Burrito positioning itself as the best damn burritos I’ve ever had in my life, to belaying from inside a car through an open sunroof because it was too cold to stand outside and safely monitor the climb that day, to snowboarding in the middle of the street towed by our car after a big powered dump before the notoriously slow Larimer County snowplows ever caught up with demand, to endlessly grinding rails in Tony Hawk, trying to nail a new high score. Gaming has always been a part of my life, but Tony Hawk has this very special place reserved, marked by a remarkable, carefree time pocketed by adventure and joy.

So, pulling up Tony Hawk’s Pro Skater 1 + 2 for a quick graphics comparison ended up stirring a bit more nostalgia than I had bargained for. But man does this game pass the test of time. The first thing I had to do was load it up on the PS4—I can’t hardly do an accurate graphics comparison without a baseline—and the game looks fine on the PS4. There was a little bit of stutter when breaking some objects and a whole lot of pop-in, especially when using the skater customization and trying on new hairstyles, outfits, etc., but it looked good. Then I jogged upstairs to the PS5, and woah…buttery smooth. With 120 FPS at 1080p, or 60 FPS in 4K, you’ve got options and can’t go wrong. Where the game really shines is in the lighting and shadows, but the smoothness of the animations are also of note. The audio pops, too, incorporating spatial audio to grab those classic background music tracks and fill the room. 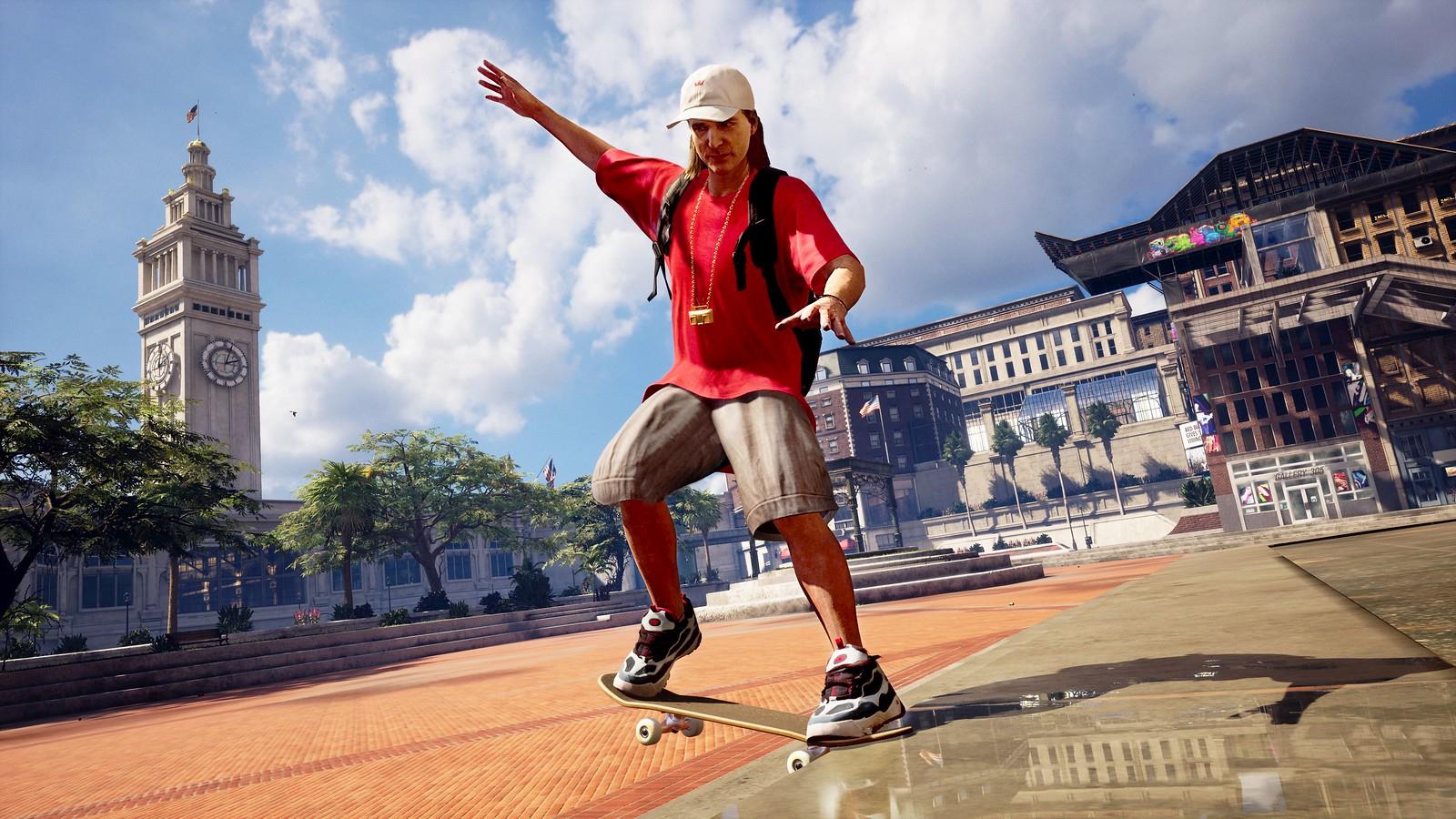 Tony Hawk's Pro Skater 1 + 2 got a bit of flack when it was first announced that the next-gen update would be a $10 up-charge, but I have no hesitancy in suggesting it’s worth it. The game is good on PS4, but it is truly great on PS5. Load times are reduced via the SSD, the 60 FPS 4K is gorgeous, and the soundtrack hits me right in the nostalgic feels. But what makes the whole experience even more worth the price of admission is simply how well this game plays and offers something you can’t readily find today. Yeah, it’s a classic. Yeah, we have a history. But even if you’ve never played a Tony Hawk game, this is a chance to take an objective-based ride down a rail to the late '90s and actually experience what gaming was like before every single outing of this ilk went all open-world on us.

It stands out, like much of the punk music powering the soundtrack, against the grain, defiant against current trends. You aren’t free to just roam, and you don’t want to be. You are given a timer and a series of tasks and a truckload of momentum behind your deck to launch off ramps, grind down rails, and master half-pipes to achieve those goals. Whether it’s collectibles, trick combos, high scores—every attempt is bound by the timer, and every run all the more intense because of it. It’s a game with bounds and limits, and it makes for frantic, poignant gameplay—something much of the open-world crowd could learn a thing or two from.

What you end up with is a legitimate game of the year contender; if not overall, then certainly in the sports genre. Because Tony Hawk's Pro Skater 1 + 2 is more than just an old game with a fresh coat of paint. It expands a kick ass soundtrack with an entire b-side of awesome, on-point tracks spanning punk, metal, and hip-hop. It features the maps of 1 + 2, but actually incorporates the best of the control schemes from across the entire series, although the purists can revert back to the 1 + 2 schemes if they insist. 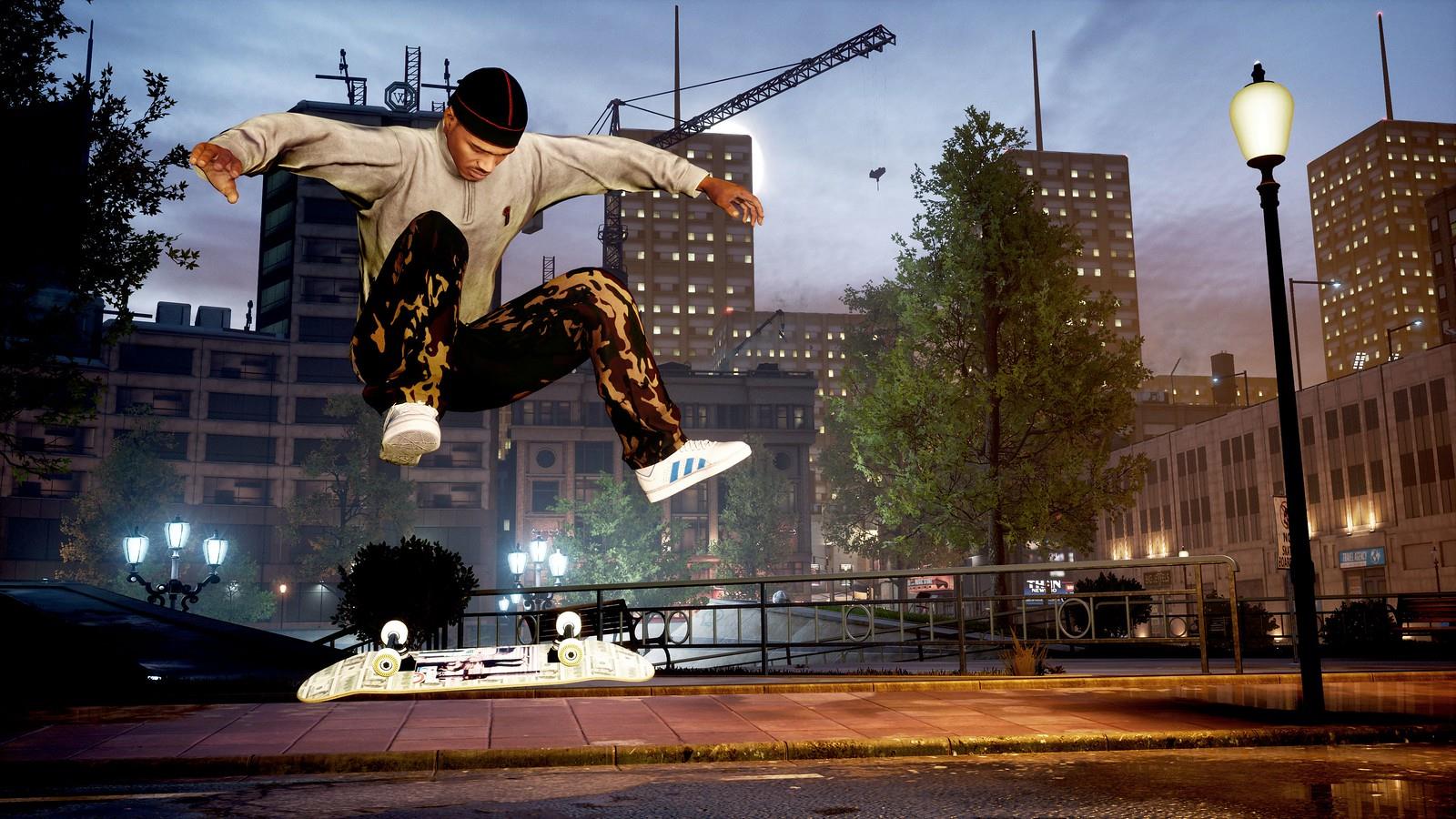 And really, what is the state of sports games now? Pretty dire in my opinion. I don't play Madden because I actively despise the NFL. FIFA is in probably it's worst state in 25 years, having sacrificed everything that made that game the best sports game, year after year, in favor of FUT and its loot boxes. Pro Evo just took this year off. The Show is critically acclaimed but baseball does nothing for me. NBA2K is now a casino for children.... So yeah, Tony Hawk's Pro Skater 1 + 2: sports game of the year for me.

The few warts in this game might revolve around the clunky interface required to transfer saves from PS4 to PS5. But is that even fair? It's a one-time, one-way action. It could be more seamless but at least the interface exists. Progress with your create-a-skater carries over and all your trophies as well, when it works anyway. It did take me two tries to get the trophies to pop, and I was locked out from those trophies without the re-do. Essentially, when you pop a low-hanging fruit trophy, like unlocking your first map or making any change to your character, if you start a save file on PS5 before doing the save transfer, make sure you delete that file from local storage on the PS5 before initiating the transfer. Because otherwise the trophies won't drop. You can make more changes and unlock new levels, but that trophy you win on first action would otherwise stay forever unticked.

Tony Hawk Pro Skater is an iconic series. It takes gameplay that is easy to learn and difficult to master, sets it to a soundtrack that highlights the very best bands of the '90s punk, metal, and hip-hop scenes, creates urgency in every run, and lays the map out with intended synchronicities to transition seamlessly down the smooth, clean lines from jumps to rails to trails. The brief was to write up impressions on the graphics and upgrades of Tony Hawk’s Pro Skater 1 + 2. But take any dip into this game and you will soon realize what you’re playing isn’t just a graphics update on a classic title. It's a reworked and remastered game of the year contender that is focused on the maps and tunes from the first two games, but incorporates the moves and skillset from the best of the entire series, beefs up the soundtrack with an entire b-side of additional tracks, and succeeds in the rarest of things: using 20-year-old concepts to breathe new life into a genre that has for too long found itself aimless in an open world.

And when it hums, it absolutely belts out an anthem. When your skill finally catches up with that vision and you're transitioning from ramp to rail to pipe, it's an aria. Sometimes you hit those notes just for the fun of it. Other times it's to stretch your limits and finally reach that last collectible or secret tape as the clock ticks out on your run. Challenge, limits, skill, reward all playing together to a backbeat of a soundtrack that, if you're not careful, you might find yourself just pausing the action to get lost in by itself.

Tony Hawk is an icon in the skating world. The video game that bears his name is a classic in the gaming world. The latest iteration of that series is a triumph in the modern gaming age. The only thing this game is missing are those personal favorite locations from Tony Hawk 3, dare I dream a little dream for DLC. Oh yeah, and the graphics look great on PS5, so buy the upgrade y'all. That was the original point of this article, right?