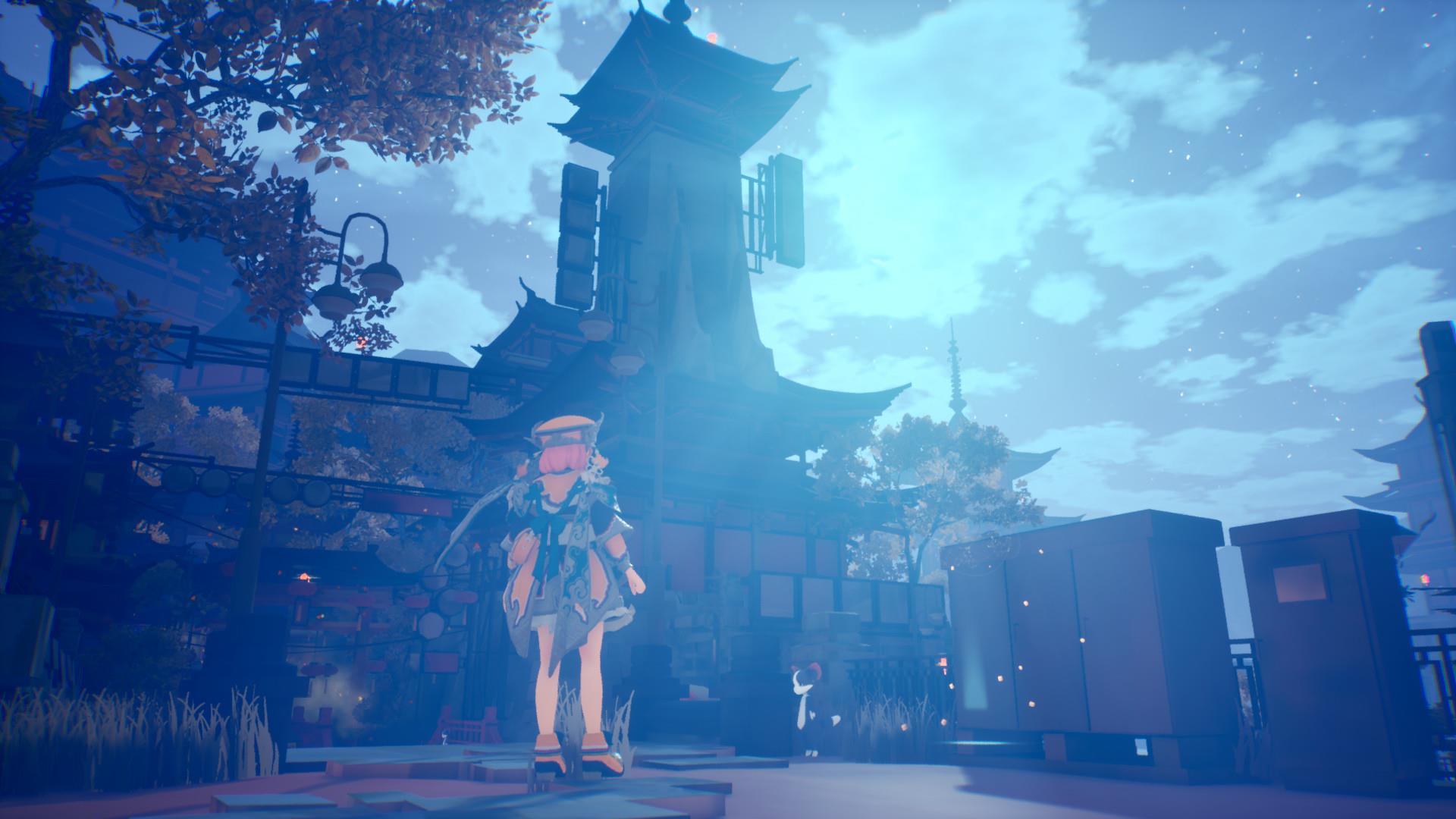 Written by Russell Archey on 5/10/2021 for PC
More On: Tasomachi: Behind the Twilight

Not to sound like a broken record but I’ve been a huge fan of platformers dating all the way back to the first time I played Super Mario Bros. on the NES. That being said, platformers can come in a variety of flavors, so to speak, from something as difficult as Mega Man or any 3D platformer, to something a lot more simple where exploration is the main focus over combat. I’m a fan of both ends of the spectrum, though the game I’m checking out today may be a bit too simple of a platformer. While I do enjoy nice and relaxing games, a degree of difficulty would still be nice. 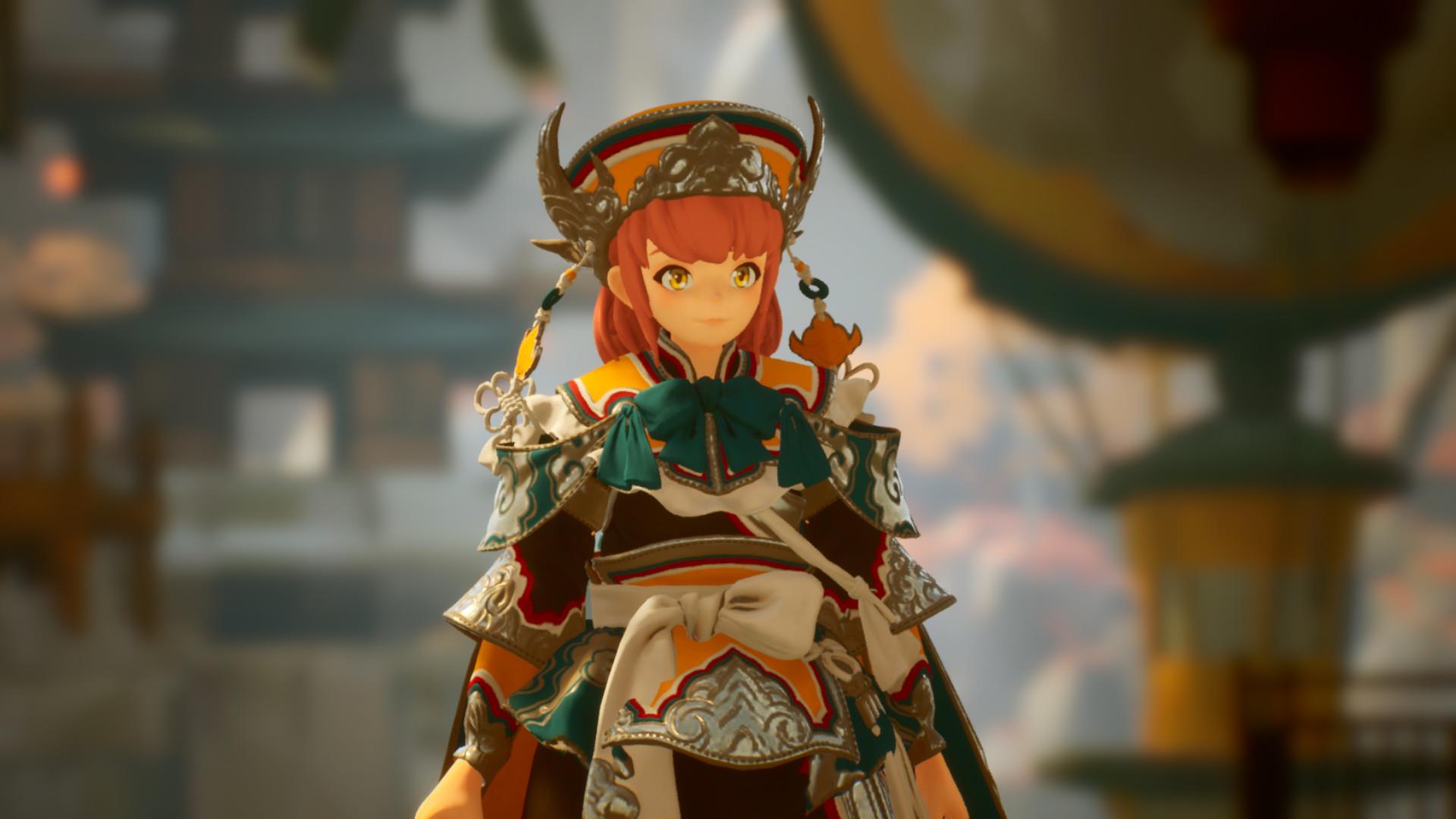 In Tasomachi: Behind the Twilight you play as Yukumo, a young girl traversing the world in her airship. As she reaches a town known as Silent Valley the airship breaks down, so she decides to look around the town for possible parts to repair the ship. However, the town itself has fallen silent with no one around, aside from a cat-like species known as the Nezu Tribe. You’re told that you can collect Sources of the Earth to repair your airship and…that’s about it in terms of the story. One of the game’s biggest downfalls is that it’s pretty light on the story. You’re told a bit at the start and you’ll get a few notes about the towns, but that’s really about it outside of a few snippets here and there as you progress.

The main goal of the game is to find Sources of the Earth to repair your airship. There are roughly 244 in the game if my math is correct (in Silent Valley you can visit your main “house” and see how many are left in each area). Aside from Silent Valley there are three other towns. Each one has a load of Sources to collect as well as having two Sanctuaries. Your initial goal is to not only collect the Sources you can find in each town but also to clear the Sanctuaries to clear out the fog placed around the town. 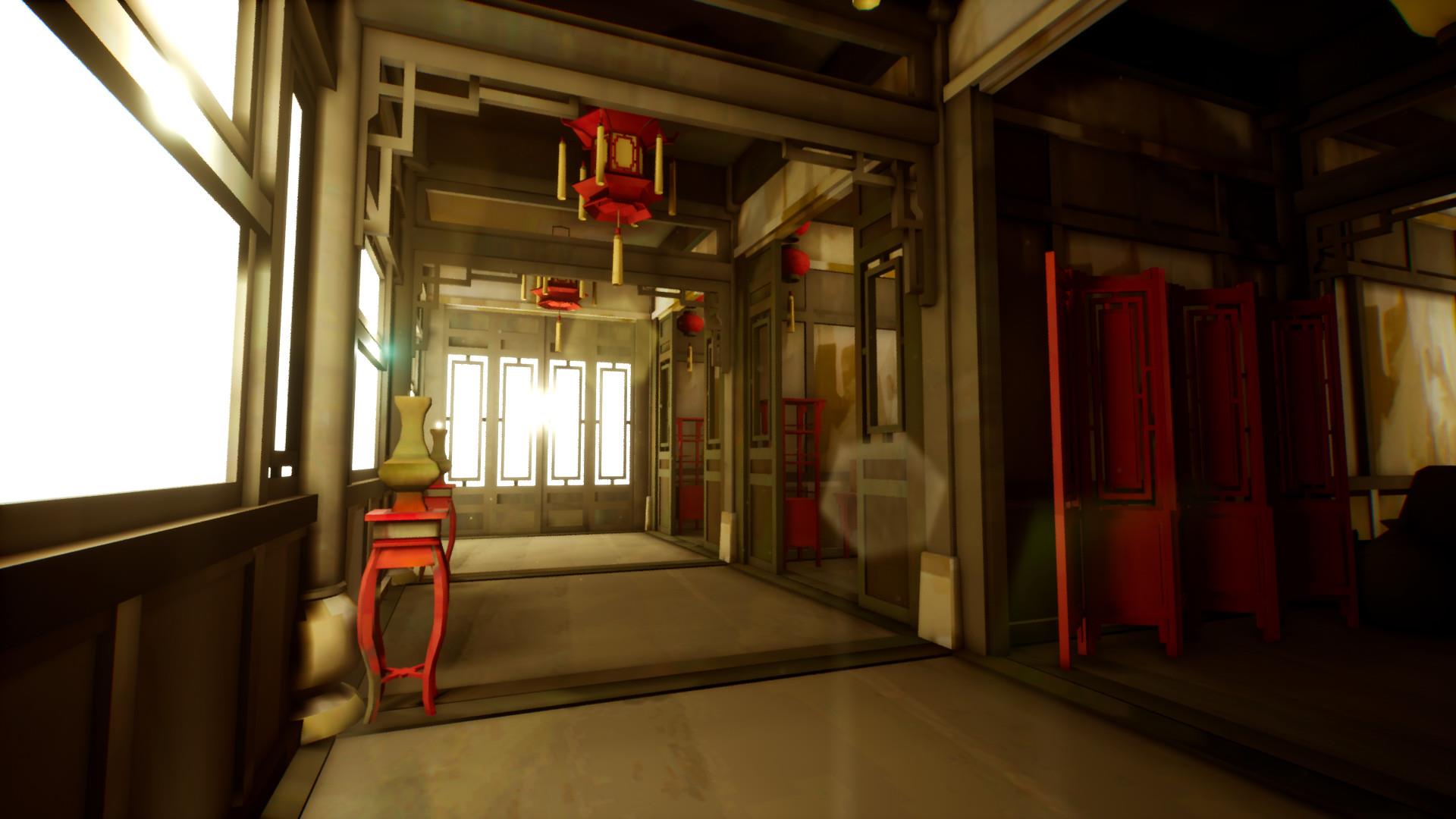 Each sanctuary consists of four rooms filled with puzzles that have to be completed before moving onto the final room to collect a Source of the Earth and revive a tree inside to clear out some of the fog. The puzzle rooms themselves aren’t anything too complicated as they typically consist of moving and jumping across various platforms, with each room typically containing a gimmick of some sort, such as moving or disappearing platforms. Aside from a few rooms that actually require some thought, none of the puzzles are too challenging, and the only penalty for falling into the water below is just being put back at the start of the puzzle.

Once you collect a Source of the Earth some of the fog around the town will lift as stated before and you can explore more of the town. This means there are now more Sources available to collect in town and one sanctuary in each town will give you a new ability, either a gound-pound like technique, an air dash, or the ability to float which is more like a double jump. After gaining an ability from a sanctuary it’ll be an important tool for the second sanctuary in that town as well as in gaining more Sources of the Earth. Mastering a technique (which really isn’t that difficult) is imperative not only to getting through the current town, but for what lies ahead further into the game. 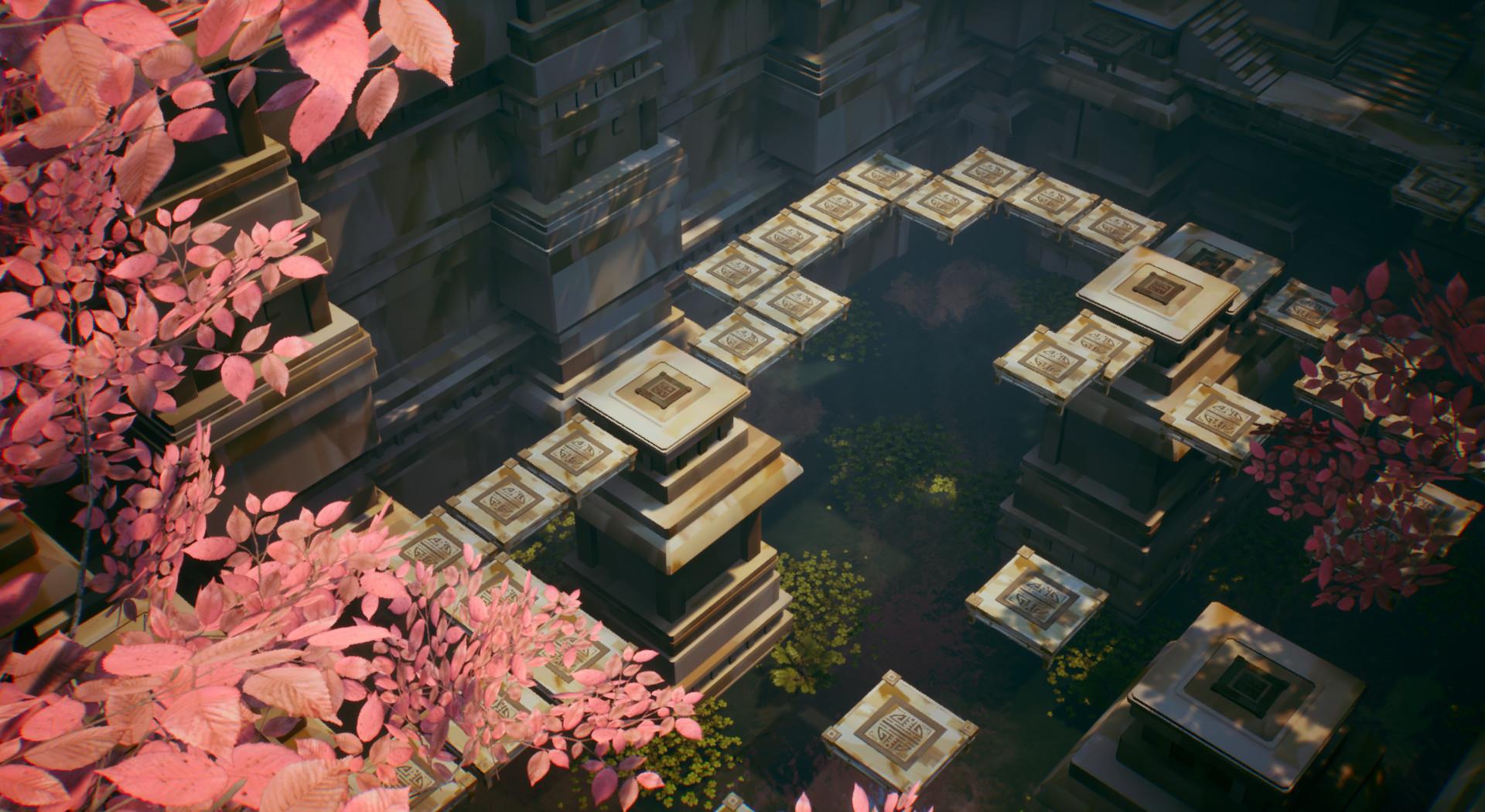 You have to collect a total of 90 Sources to repair your airship after it breaks down at Silent Valley, but you do use the airship right at the start to get to Silent Valley and begin the game proper, and sadly this has what’s probably my biggest issue with the game: for whatever reason, you can’t change the Y-Axis for the camera when using the airship. In the controls menu for the game there is the option to change the Y-Axis but for some reason it only applies to when you’re walking around the towns. If you don’t typically change this then you won’t have any issues, but the first thing I do in a game is immediately change the Y-Axis to inverted because that’s what I‘m used to. Also this wouldn’t be a major issue since the airship just breaks down basically within the first couple of minutes into the game, but later on it becomes a much bigger issue.

Remember when I mentioned there are roughly 244 Sources in the game and you need 90 to fix the airship? Once you do you can now fly the airship around each town, but you can only get a few more Sources via this method. Granted you can see more from the air so you can tell where they are, but unless they’re shaped like a balloon (the normal ones are shaped like lanterns), you can’t actually collect them from the airship. The next main goal is 150 Sources which means more hunting around the towns and sanctuaries. That’s right, each sanctuary actually has 10 sources, not five. In most puzzle rooms you might have seen a Source on a high up platform out of reach. Now that you’ve passed the 90 Sources requirement the puzzle rooms now have paths to reach those platforms, but they’re more difficult to traverse. Each puzzle room also has two Source pieces to collect with one each in the main tree room and the entry room for a total of ten pieces which will get you your tenth and final Source in a sanctuary. 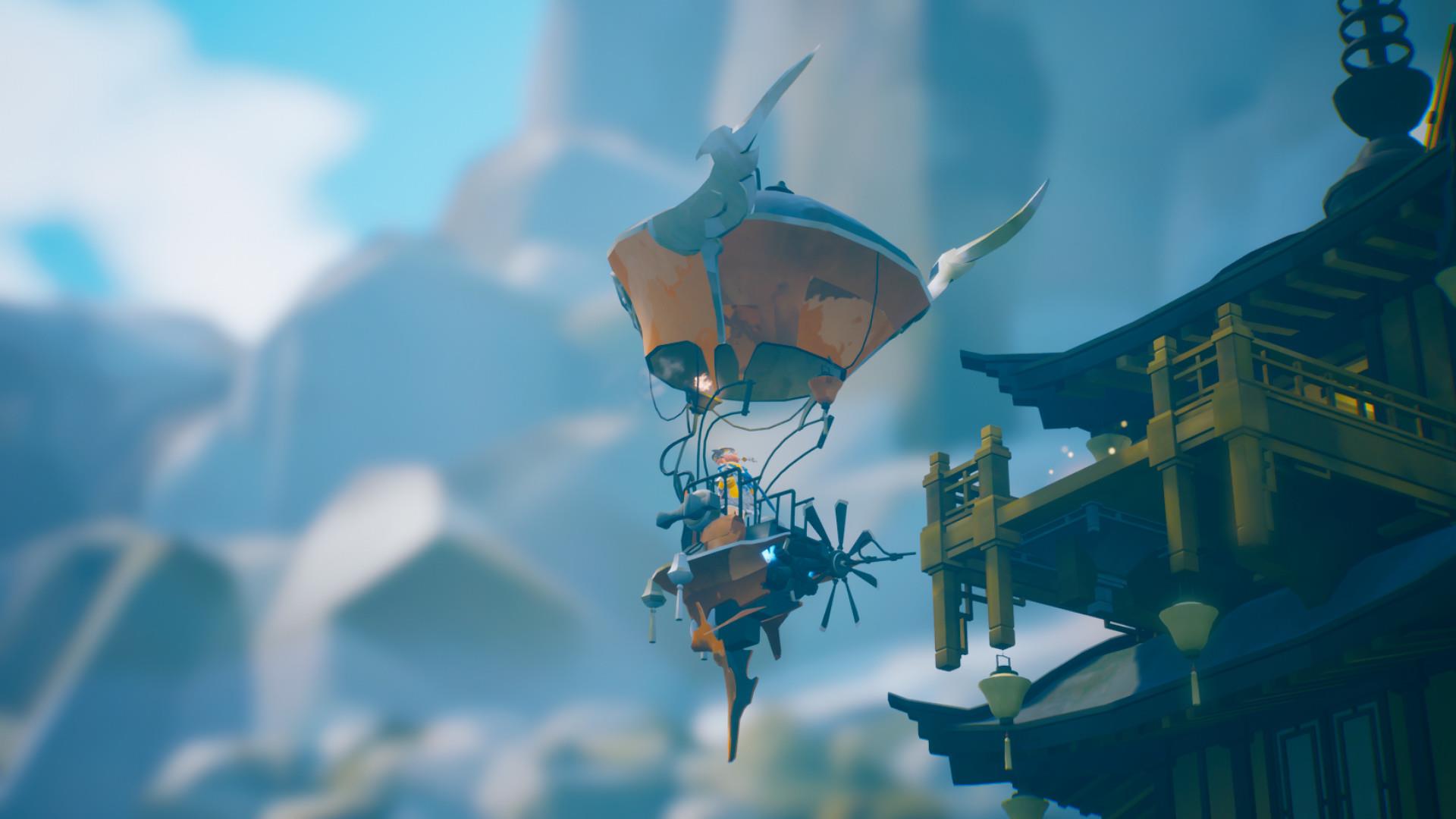 So to put this all into perspective: there are three major towns, each with two sanctuaries, and you’ll be replaying them all several times over just to get all of the Sources, but the replayability extends a bit further than that. A lot of the Sources are found by doing various tasks such as collecting pieces of a Source, digging them up from the ground, ground pounding a broken bridge to get to one below it, taking a leap of faith, pulling weeds, breaking vases, and so on. So what’s the issue with that? A lot of those tasks are repeated in all three towns meaning you’re basically playing the same thing three times over just with a different layout.

Now granted some of the Sources are a bit more difficult to figure out than others and there are a few times I’ve seen the spot where one will appear, I just have no idea how to get it outside of one of the cat creatures giving me a hint now and then. So you have your 150 Sources. Now what? I won’t spoil it any further than this, but once you complete another task you can return to the towns to unlock even more Sources to collect with a new goal of 180 which I’m guessing will unlock some more Sources and repeat ad nauseum until you have all of them. 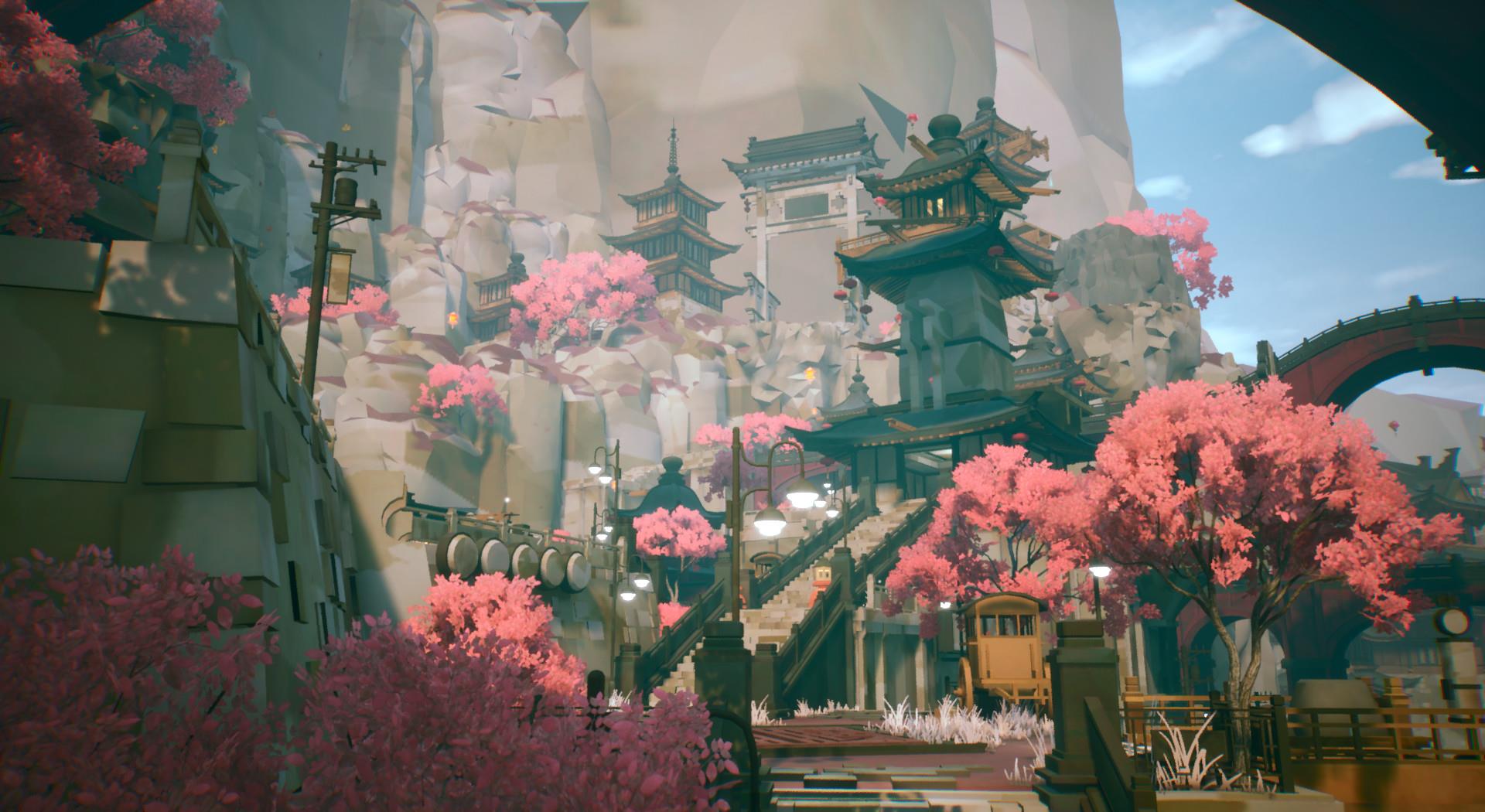 Now comes the hardest part for me with this game: giving an overall opinion on it. I’m just going to come out and say it, I really enjoyed the game for the most part, but I can definitely see where others wouldn’t. The highlights for me are the graphics and music. I’ve read other articles where people have said the graphics remind them of The Legend of Zelda: Breath of the Wild and I can definitely see where they’re coming from because, to me, the graphics are absolutely gorgeous. The music also reminds me a lot of Breath of the Wild with a lot of piano being used similar to BotW. Beyond that though is where things begin to slip a bit. Even though the game feels relaxing with no enemies and basically no penalties to taking a dive into the water in a puzzle room or surrounding the towns, there’s not a lot of challenge in the game either.

The repetition in the game is also a bit of a disappointment. Taking out the 60 total Sources between the six main sanctuaries, each town has 60 to collect with a lot locked behind some sort of barrier be it finishing a sanctuary and lifting a bit of fog, fixing the airship or completing another major task or two. Also recall that I mentioned most of the tasks to get the Sources were the same across all three towns and the repetition can get a bit boring after a while as you’re basically just doing the same things over and over aside from the sanctuaries. Overall Tasomachi: Behind the Twilight is fun but repetitive. While it looks and sounds gorgeous, I can definitely see where some people might not want to plunk down 20 dollars for a collect-a-thon with very little to no challenge.

Tasomachi: Behind the Twilight is nice and relaxing—and that's about it. While the game is nice to look at and listen to, there's very little challenge and, for a collect-a-thon, I can see where that can turn some people off. If you don't mind a simple game then the budget price tag might not seem too high. But if you're looking for a challenge, you definitely won't find it here.