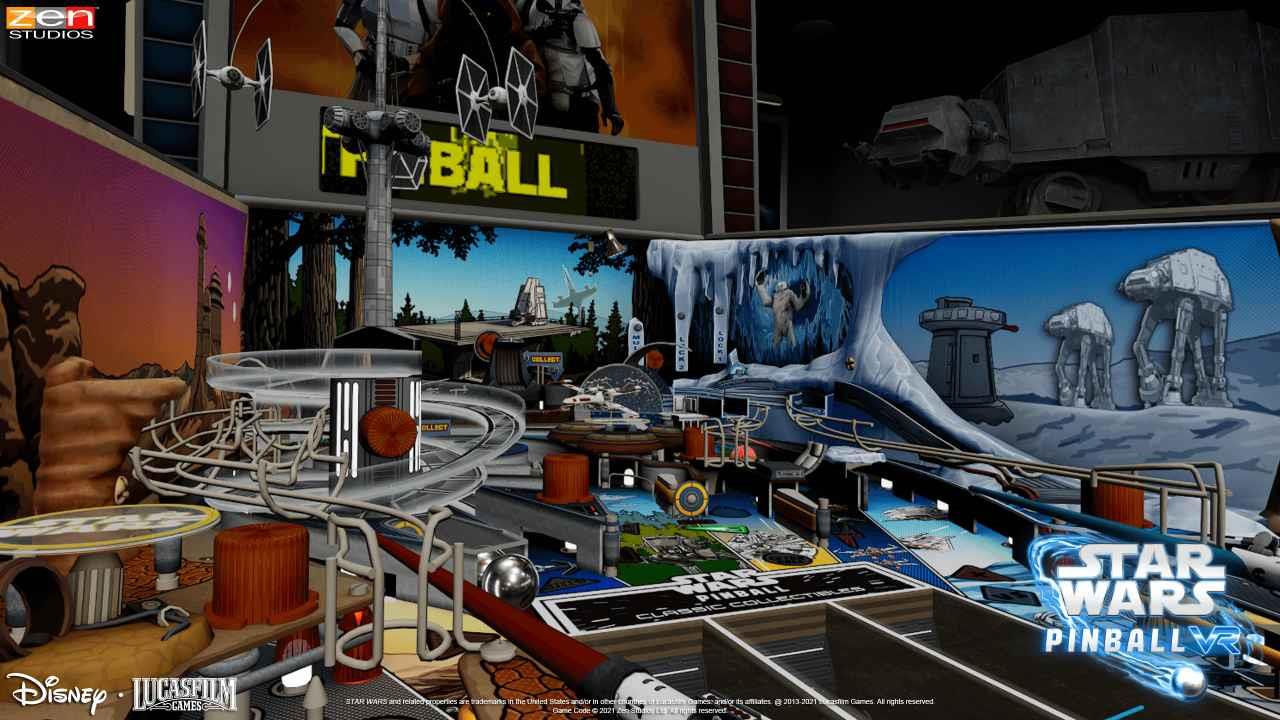 Lifting a trash bag out of the trashcan the other night, I was surprised to feel some severe soreness in my forearms, almost as though I had been working out for hours on end with a hand grip exerciser. I pondered what could have caused this condition for a moment, and then I realized “Oh yeah, Star Wars Pinball.”

Indeed, every time a Zen pinball game is released, I find myself suffering from “pinball grip”. I’ve learned over time that my forearm pain is the result of constant trigger pulls on whatever controller I’m currently using, for ludicrously long periods of time. Most video game fans will understand; when a game is good enough, the fun you get from the experience is worth a little pain. And indeed, my trash bag experience simply served to remind me that I should be playing more Star Wars Pinball VR.

It is a matter of record that I have a great deal of love for Zen Pinball in general, and Zen’s Star Wars Pinball tables in particular. I’ve probably spent weeks of my life clacking away at one Zen table or another. And the 19-table Star Wars Pinball collection released on consoles a few years back is one of the best values in gaming, offering mountains of gameplay for a very low fee (I’ve been waiting for Zen to duplicate this release with its Marvel tables, but so far no dice). When I heard that Zen was bringing the Star Wars pinball experience to VR, I was beyond excited.

The transition to VR brings a ton to the Star Wars pinball experience, not the least of which is the sensation that the player is standing in front of a real – if impossible – pinball table. One of the biggest problems I have with console pinball is finding the right view so that I can trackthe ball. Playing in VR completely alleviates that problem, allowing for perfectly natural tracking with, you know, your eyes. I cannot express what a cool experience this is, especially when playing on one of Zen’s magical tables. 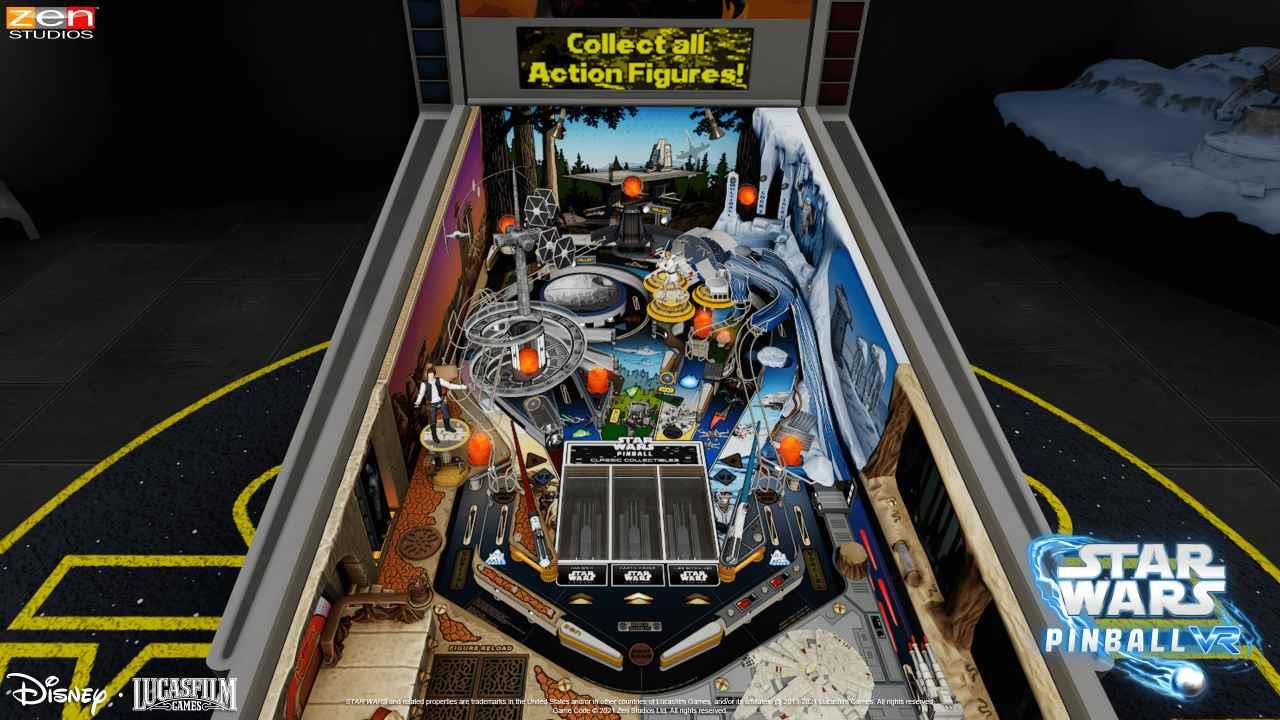 The secrets and special effects on these tables are boundless. Characters come to life, laser fights ensue, and spaceships come floating up to hover above the bumpers and ramps. It is all super, super cool, and the illusion is entirely effective. If feels as though you are playing pinball in a better alternate universe.

Those are not the only VR enhancements though. Each table comes with its own fun real-world manifestations, which show up hanging out next to the table. Luke Skywalker stands off the side, waving his lightsaber around. While you play on the Rebels table, Chopper clunks around, hopping over the table before gameplay starts. Perhaps the coolest of all is Mando, who watches and occasionally criticizes your abilities while you play on the Mandalorian table, all the while Grogu floats off to the side in his little ball. These are simple additions, but they do a lot to sell the immersion. The characters are fun, but never distracting. 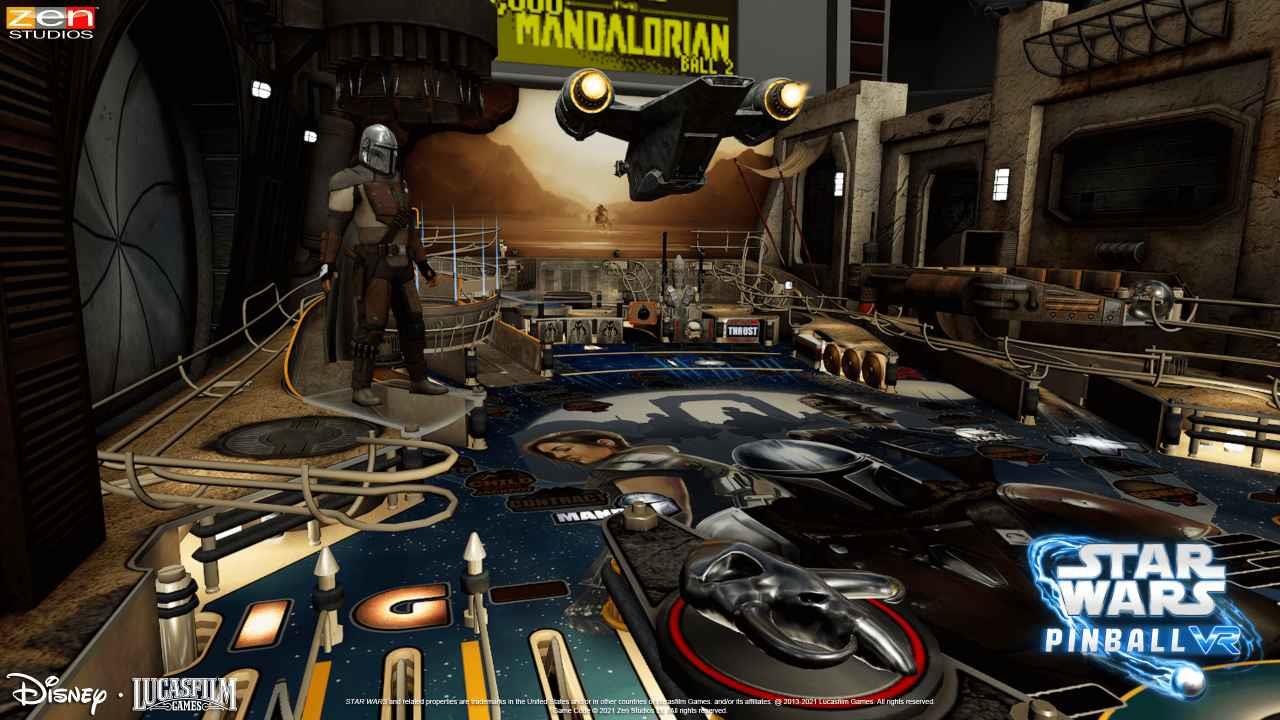 The advantages of VR really come into focus the first time you trigger one of several mini-games and find yourself teleported to a fully rendered 3D arena. For example, the dreaded lightsaber battle with Vader on the Empire Strikes Back table now places you face to face with the Sith Lord himself. Not every side mission does this – it is done infrequently enough to be jaw dropping treat when it happens.

Fans of the console version of Star Wars pinball should be aware that there is a tradeoff for all of these awesome 3D enhancements. Only eight of Zen’s Star Wars tables make the transition to VR, and though these experiences are enhanced well beyond anything one might experience on a flat screen, fans of the franchise will likely be left smarting when they see that some of their favorites have been left of the cutting room floor. 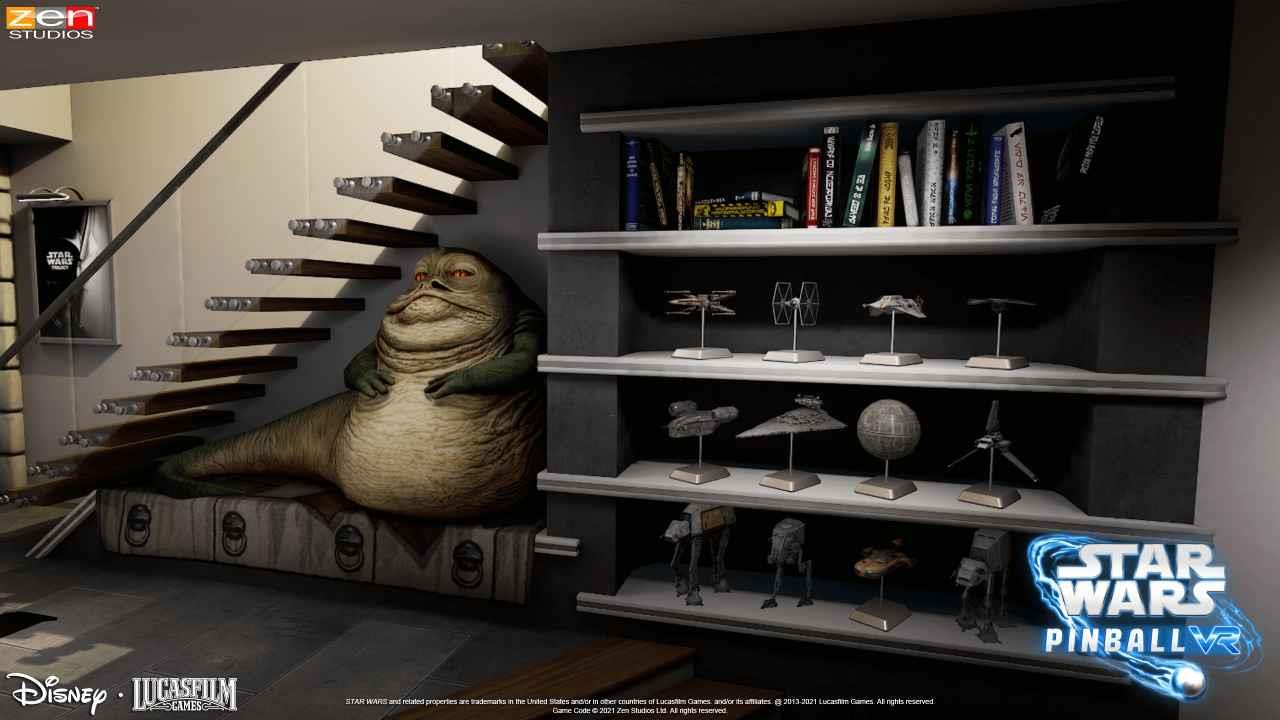 Tables based on the Star Wars prequels have always been in short supply, beyond the table based on the animated Clone Wars series. But Star Wars Pinball VR also does away with all of the recent tables based on the Disney sequel trilogy, choosing instead to focus on tables based on the classic film era – with a few new additions. While the culling of tables is very understandable, given the enhancements made to each table in this collection, it still stings a bit to see some favorites not make the cut.

Indeed, only six of the tables in Star Wars Pinball VR will be familiar to longtime fans, as this collection is rounded out by two new tables. The Mandalorian table is probably my new favorite, with swooping ramps and a fun story structure that allows players to trigger missions based on the episodes from the first season of the show. I spent a ton of time playing this table in Classic mode, which allows the player to engage with standard three-ball pinball. Last Sunday, I abandoned my family and went on a lunatic quest to top the leaderboards against the other reviewers playing prior to the game’s release. Failing that, I managed to take the top spot in Arcade mode, which allows the player to add a bunch of perks and buffs to the table. A moderate success, which I immediately captured in a screenshot to frame on my wall. 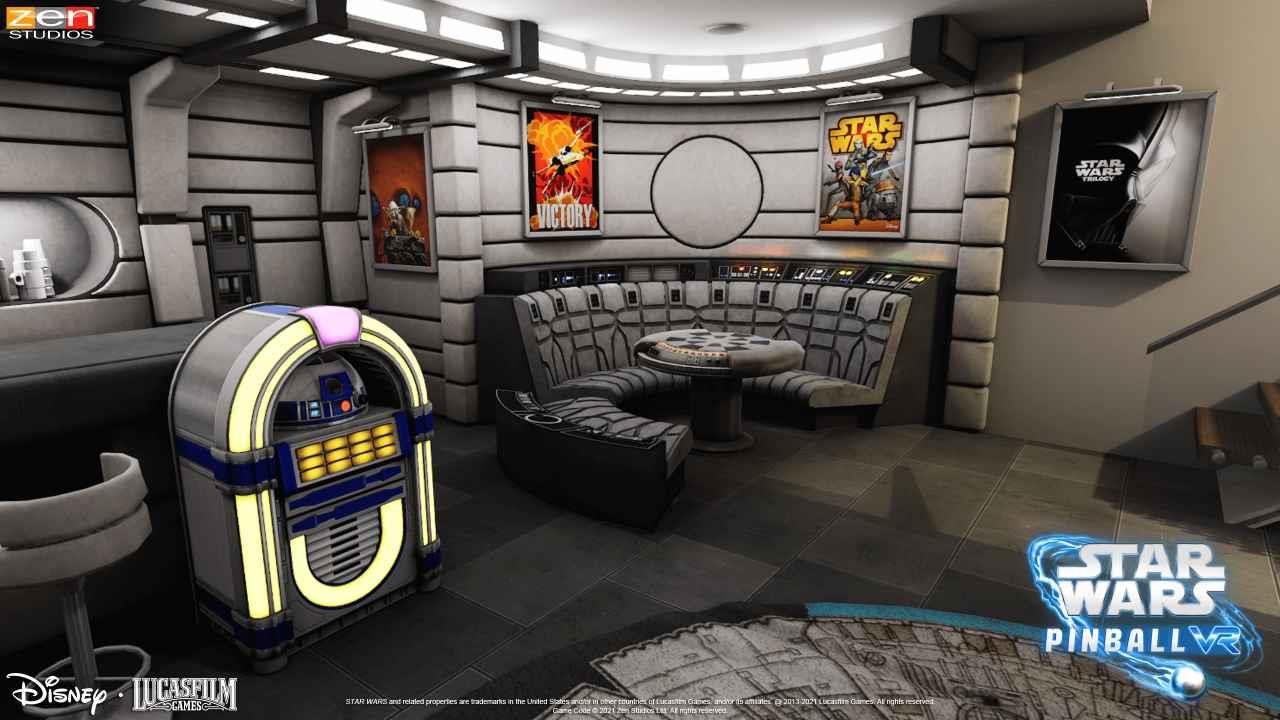 The other new table, Star Wars Classic Collectibles, was more of a mixed bag for me. Long time Zen players know that there are certain tables that click and certain tables that don’t, depending on your individual preferences and play style. In many ways, the Classic Collectibles table reminded me of the old Iron Man table; I just could not get anything going. I couldn’t shoot the ramps, I couldn’t get events started, I was an utter failure, even after studying the table guide. Oh well, you can’t win them all, and with eight tables to play on, I was able to pivot away with no hard feelings.

In addition to the afore-mentioned Arcade and Classic modes, the fantastic Career mode makes a return from the console release. This is probably my favorite way to engage with Star Wars Pinball VR, as it pits the player against a series of fun challenges on a constantly rotating selection of tables.

How high can you score on The Return of the Jedi table with two balls? If you can only shoot for two minutes? What if you can only hit the flippers 200 times? (Pro tip: don’t hit them both at the same time). Your performance is scored on a three-star basis, and every star you get can be used to unlock more bonus perks. Career mode is a great way to gain familiarity with all of the tables, with goals steadily advancing in difficulty to improve your overall performance. 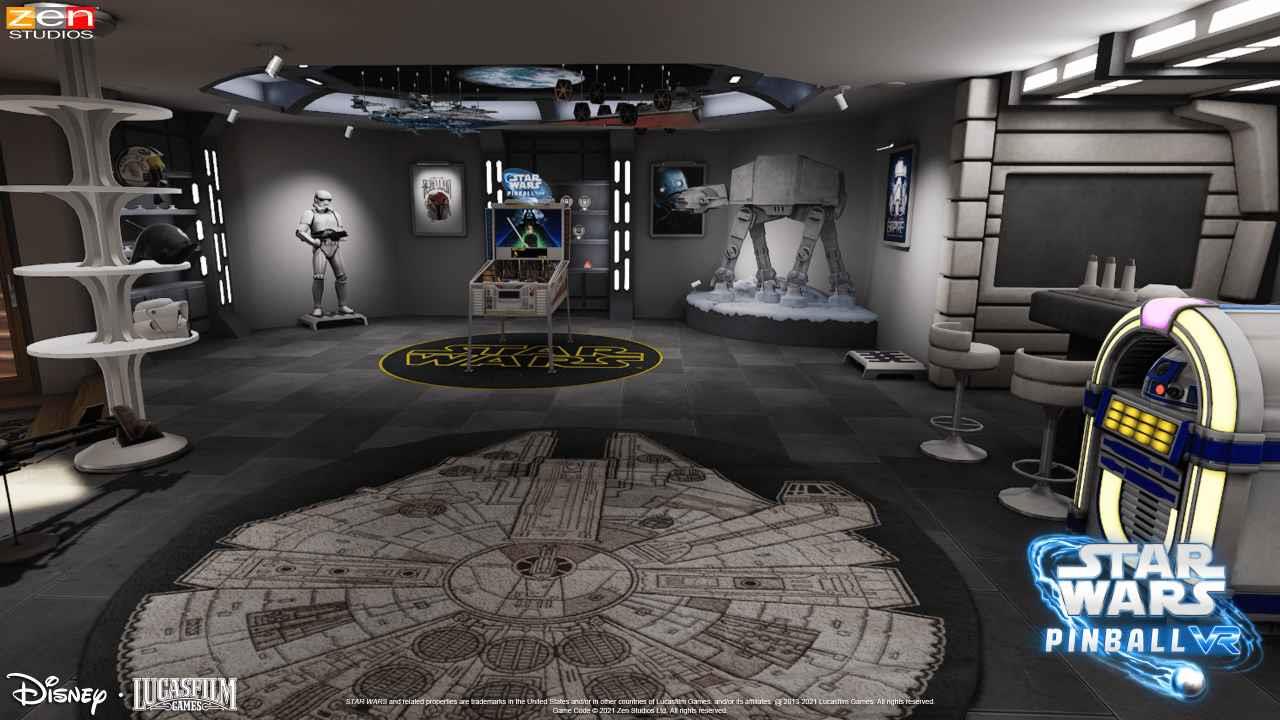 Beyond the tables themselves and the myriad ways to engage with them, Star Wars Pinball VR also offers an absolutely stellar framing device – the Star Wars basement cave. Look, I’m not going to try to tell you that this is the coolest thing I’ve ever seen in VR. But I am going to say that I enjoyed the basement cave way, way more than I expected.

You start in a basement with a bunch of empty poster frames and shelving units. As you play the tables, you start unlocking collectibles to hang on the walls and arrange on the shelves. I went full Empire, decking out my basement with full-size Stormtroopers, Death Star models, and posters of the Emperor sitting on his throne. Just the act of futzing around with your basement setup is a ton of fun – and you also unlock Star Wars tunes to play on the jukebox. It may seem a little silly, but I really got into it; Zen knows how to please their audience. 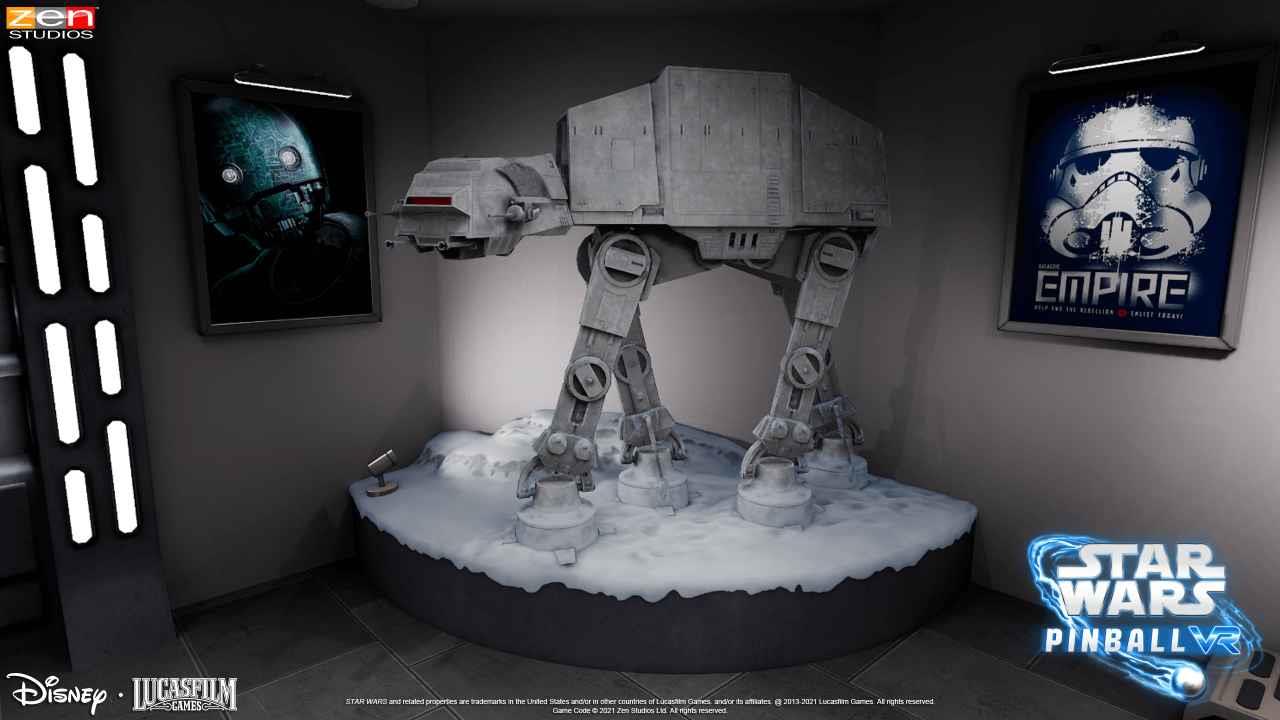 The only things holding me back from giving Star Wars Pinball VR a perfect score are a few technical hiccups I experienced in the build I was playing. Sometimes after being transported to a 3D minigame, Star Wars Pinball VR wouldn’t place me back in front of the table I was playing correctly, instead putting me several feet away. I also had a few audio issues – the sound on the Rebels table seems to be cranked to the point of distortion, and some of the voice samples on other tables seemed to vary greatly in volume. But I fully expect these issues to be addressed by patches rather quickly, leaving one of the best VR experiences I’ve ever had in pristine shape.

If you are a fan of Zen pinball, or a Star Wars fan, you simply can’t go wrong with Star Wars Pinball VR. I love it so much I’m going to buy a second copy of it on Oculus Quest 2, just so I can play it in other rooms of my house. Zen is one of the most reliable developers in gaming, and this new collection is no exception. You’ll have a blast with Star Wars Pinball VR, and if you are anything like me, you might come out of the experience with some nicely toned forearms as a bonus.

Zen Studios takes eight of their beloved Star Wars pinball tables and blows each of them out into the VR space in delightful and unexpected ways. Each of the tables offers hours of fun, and Zen provides a ton of ways to interact with them. The “basement cave” framing device provides a great extra layer of reward for engaging with the game. Recommended without reservation.