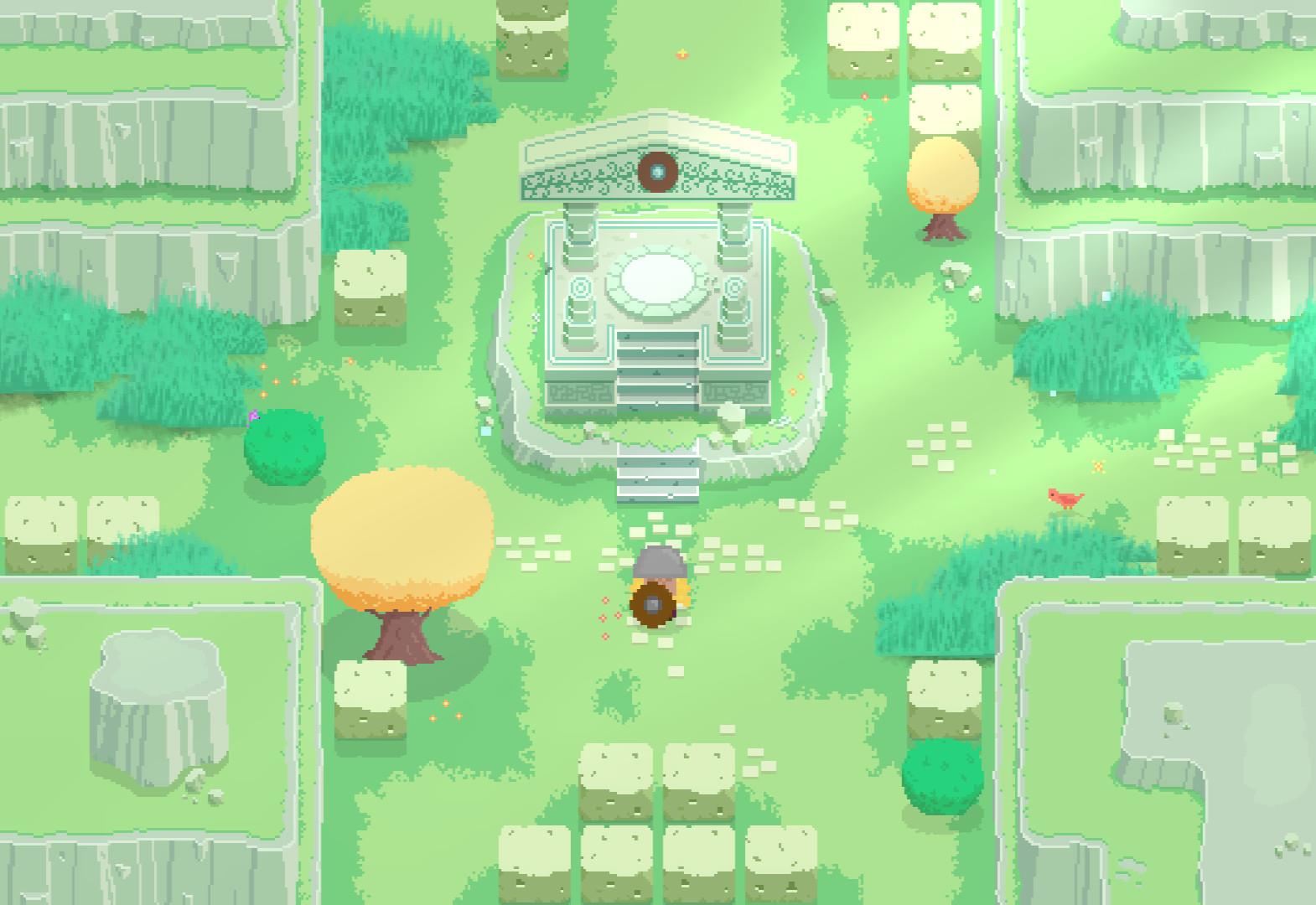 Written by Elliot Hilderbrand on 5/4/2021 for PS4
More On: Skjoldur Story

Ever heard of the old video game trope of washing ashore on a mysterious island to start a game? How about the, “It’s dangerous to go alone, take this.” If these are doing anything for you then Skjoldur Story might be for you. The maker of Skjoldur Story labels it as “A classic room-based adventure game set in an open world full of puzzles, secrets, and monsters.” If this is a genre you are even remotely familiar with then seeing the parallels it draws from a handful of obvious, well-known titles is an easy one. Luckily the games it emulates are classics, and the makers of this game have hit the nail on the head trying to take a solid foundation and build a fun, albeit short, adventure that is packed with puzzles. 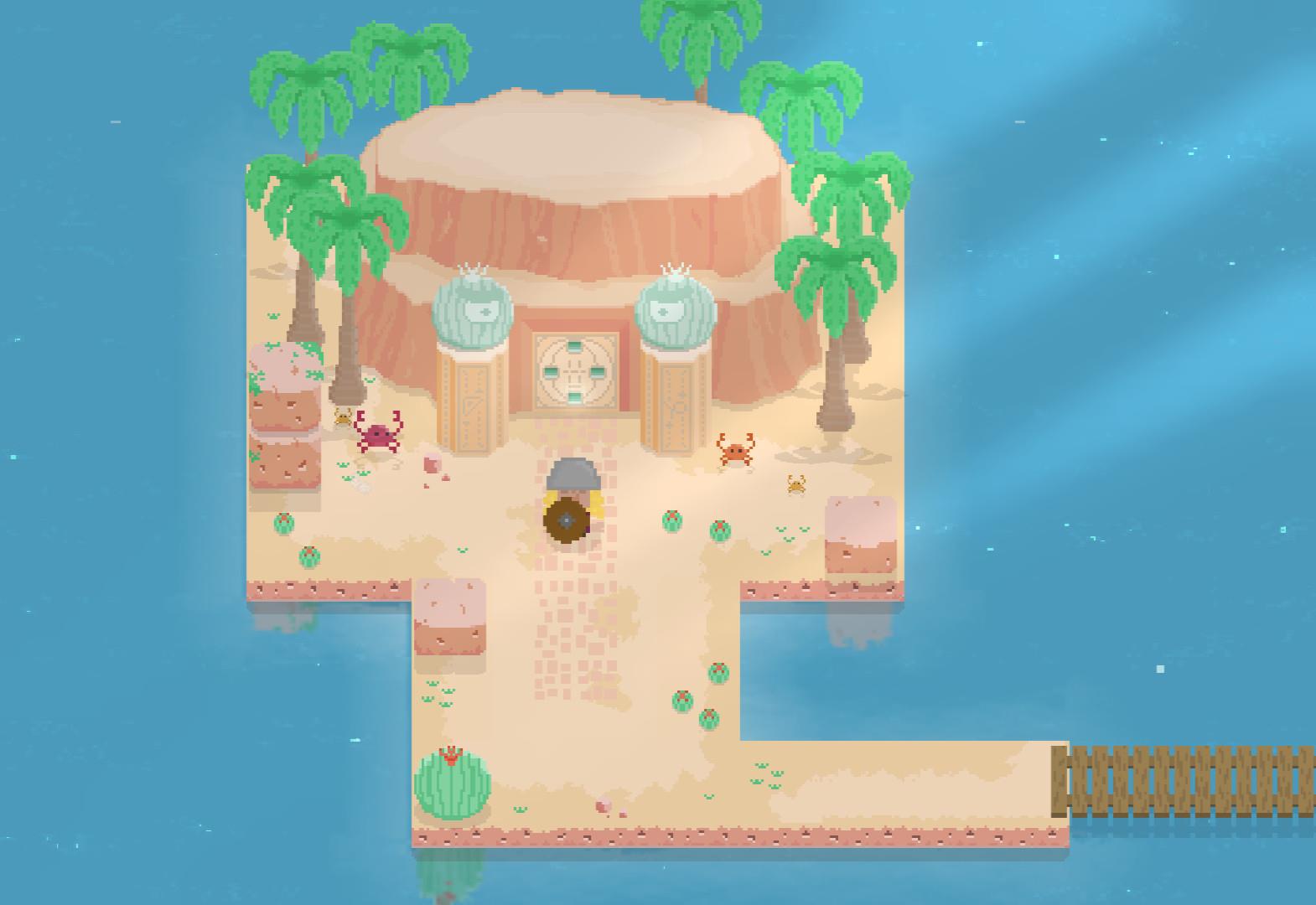 The unique aspect of Skjoldur Story is your weapon, or should I say lack of one. You are only given a shield, but it’s not just any shield. This one has some magical properties to it. Not only will it block almost any attack thrown its way, the shield will also absorb a ranged attack, letting you then fire that attack back at foes. Absorb a green glob? Shoot a handful back. You can also use your shield to slash at targets, just like a sword, even though its damage isn’t great. So, flat out saying you only have a shield is a little deceiving.

Getting used to using the shield properly took a little bit of time. Once you stop moving, your character will put the shield up. A split second too late and you get hit. It was a mild source of frustration while playing when I had thought the shield was up when it wasn’t. I eventually got the hang of it. But as I was playing I constantly wanted a button I could push to put my shield up instantly.

The world of Skjoldur Story is a colorful one full of pastels that change depending on the area you decide to adventure through at the time. Zones in the overworld, as well as the dungeons you crawl through, all have a unique look and mechanics. The same can be said with the enemies you encounter. 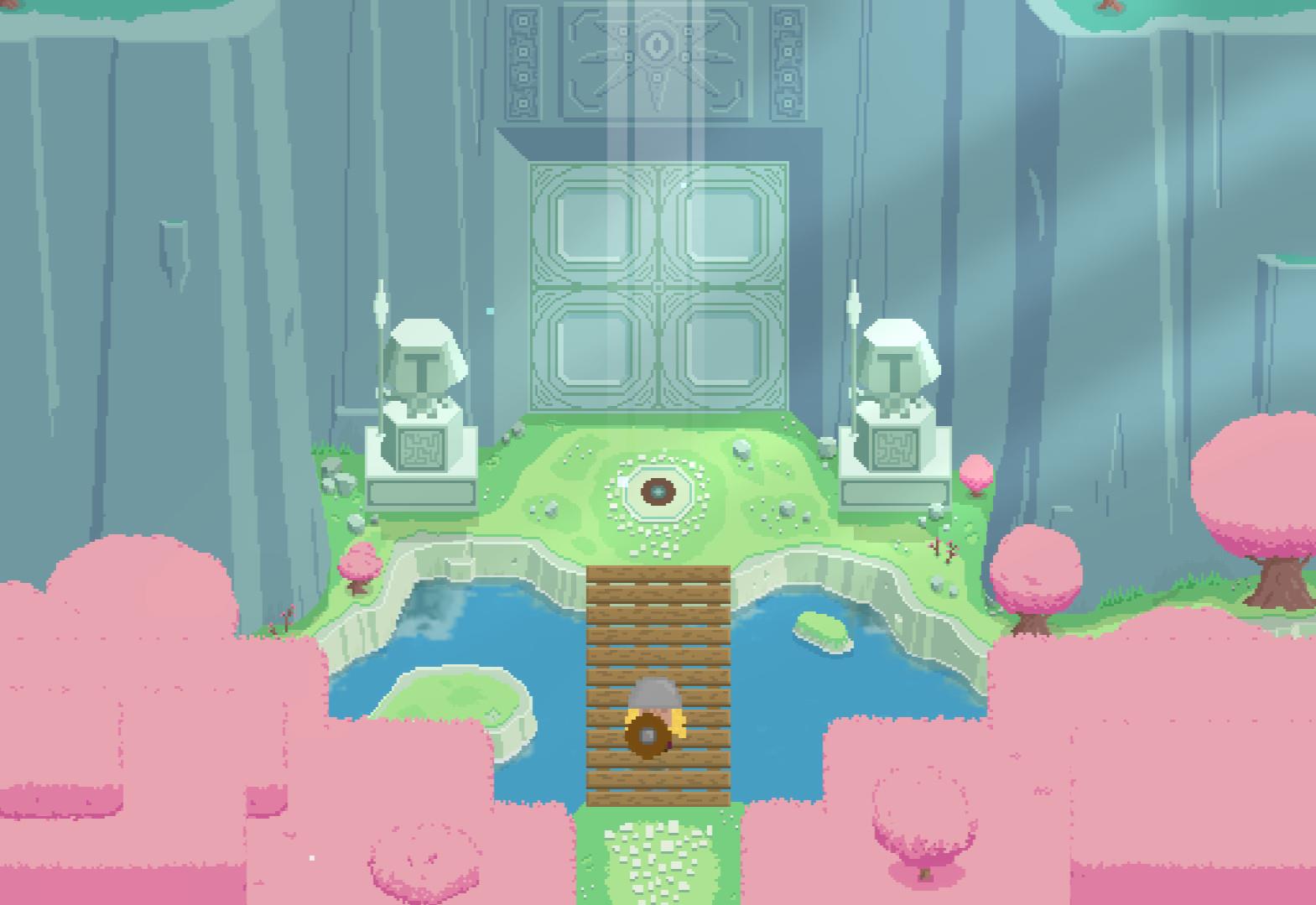 I enjoyed the enemies. Instead of the challenging enemies being further away from where you spawn, you have unique enemies based on whichever zone you are playing in. The starting grass area, for example, has ooze globs that shoot out, well, oozey globs. Once you learn the mechanic and their movement, you can counter it most times without much effort. Every now and then though, as you are trying to run through as quickly as you can to get back to the place you died, they can take a cheap shot at you, which can suck when you're early in the game and your health isn’t very high.

Your character operates in an overworld that you are 100% free to explore, limited only by your skill with the shield. You'll come across puzzles to solve of every shape and size. This is where Skjoldur Story shines brightest; the puzzles are challenging and unique. They range from simple combat to riding a ball through a course before time runs out. Typically, when you complete a puzzle in the world, you are rewarded with a coin. Earn enough coins and you can unlock a dungeon. I had a handful of puzzles that left me stumped for some time. I couldn't tell if I needed to absorb something or step on a plate. I only became frustrated to the point of having to take a break from the game one time. 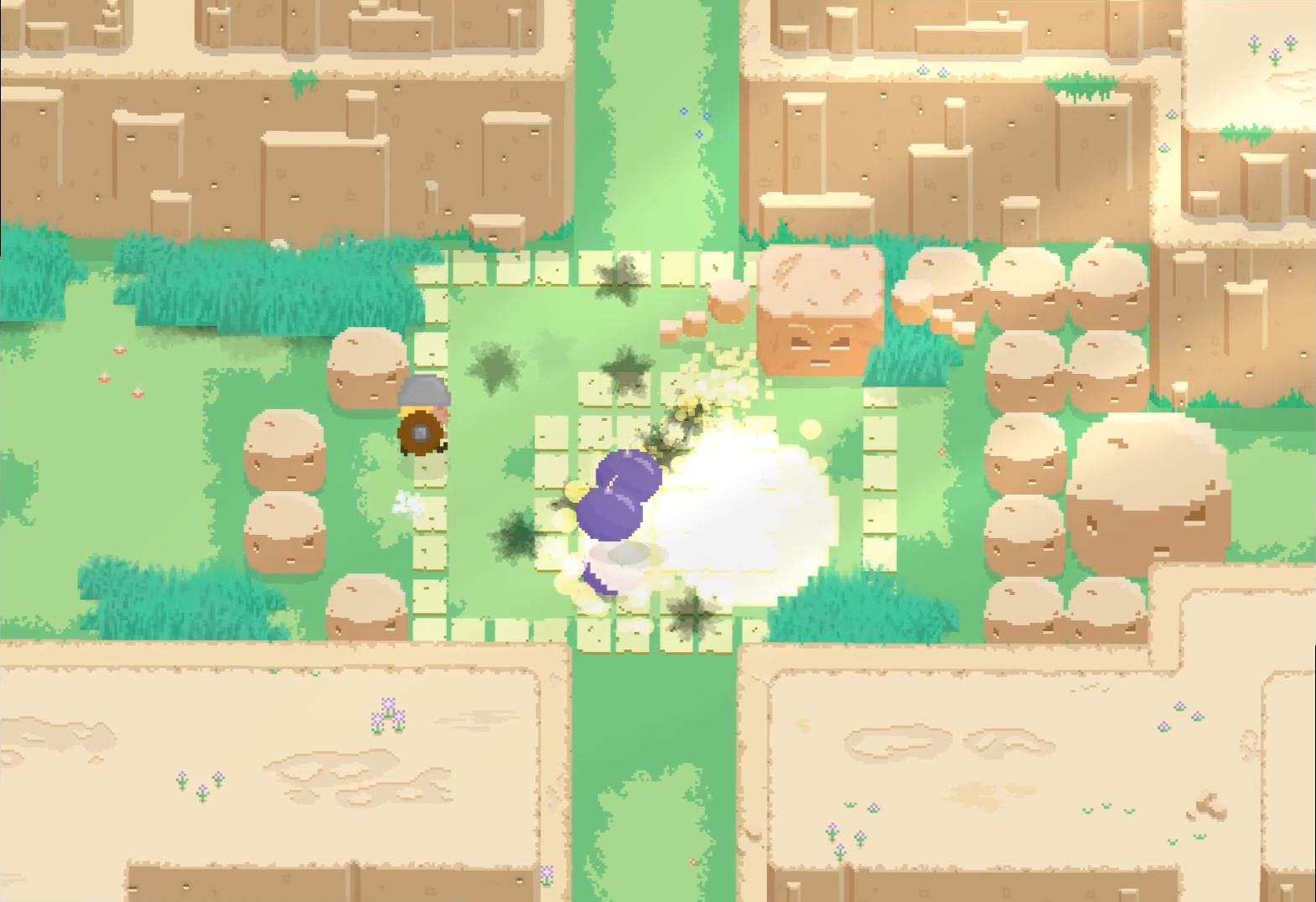 Dungeons are scattered throughout the overworld, and to unlock them you need to earn enough coins from puzzles. As I mentioned you can play the dungeons in any order, but I did find the dungeon that wanted three coins to enter easier than the one that wanted four. Coincidence? As shocking as it sounds, dungeons do have a boss at the end of them as well. All of them have a style that represents the dungeon they are in. Boomerangs in the dungeon? Boom, boomerang boss fight. Luckily if you don't defeat the boss on the first try you spawn right back in that room.

I found combat while playing with a keyboard to be irritating at times. Enemies do not hold back, and at times battles can seem downright unfair. When I decided to try plugging in a controller I felt like I was able to have an easier time with enemies, as well as with puzzles that required more precise movement. I can't recommend playing with a D-pad controller enough. It's literally game changing. 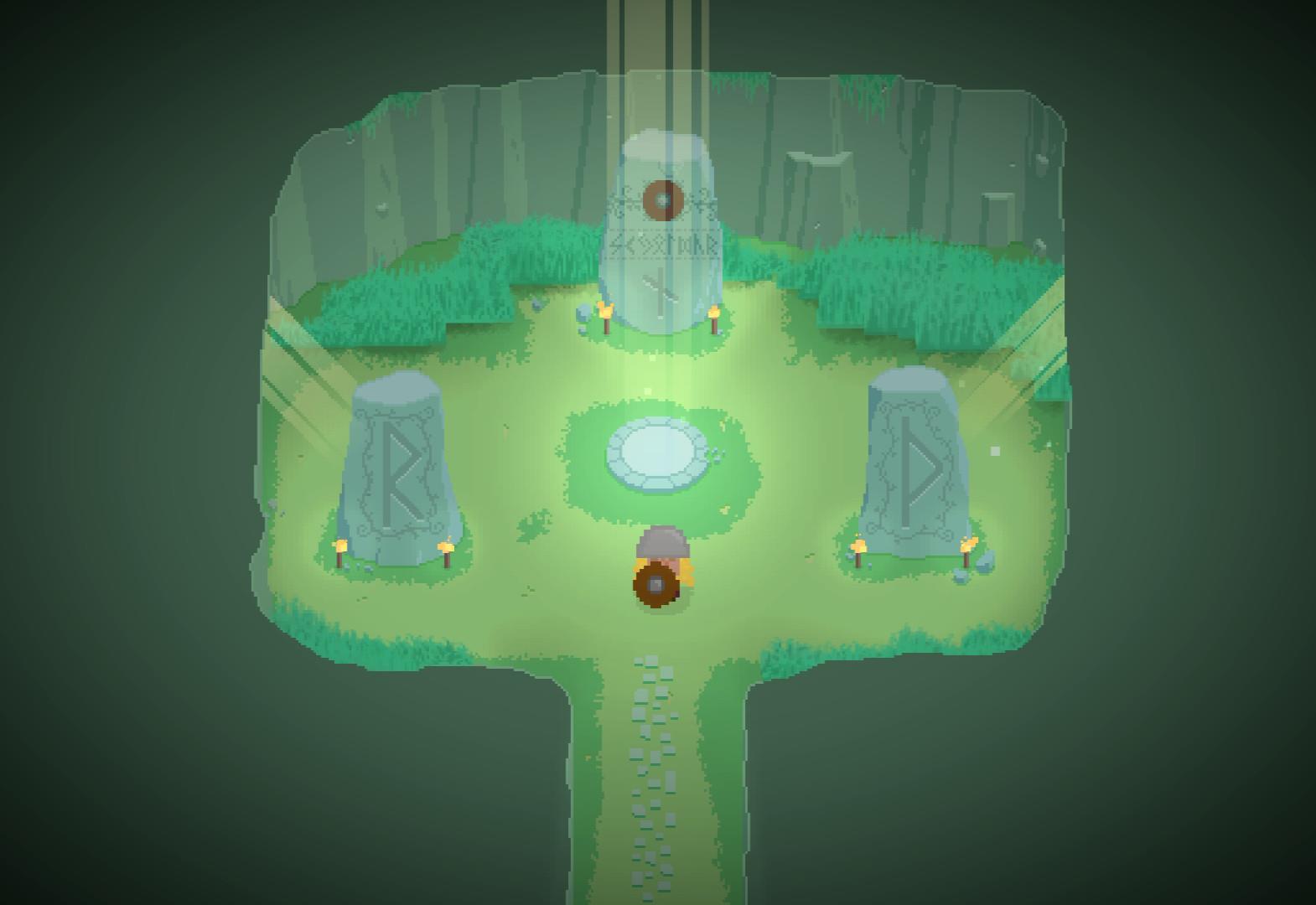 Dying might be one of the worst parts of Skjoldur Story. You always start the game in the center off the map. Dying in a tile far away from the center absolutely sucks. You don't lose items, but enemies respawn. There is nothing more defeating then clearing a path to the top, only to then trudge all the way back there because you might have cleared the puzzle, but you weren't able to open the chest to claim the reward. Another irritant - when you leave the game to continue on with your real life the game treats it as dying. Everything goes back to the way it was before. I made sure I had cleared out an area before leaving so I didn't have to repeat the process again.

Overall the game took me around 10 hours to complete, which felt solid with the amount of content that was put in on almost every tile on the overworld map. There is very little wasted space. Skjoldur Story doesn't overstay its welcome; there are plenty of puzzles in the overworld as well as in the dungeons. The most frustrating part of the game is dying, which unfortunately is a big part of gameplay. Dying and repeating what you just went through happens enough that it can become a hindrance after a handful of attempts, especially when you have to time something just right, or enemies have a mechanic that having to repeat causes a small migraine to eventually form.

Skjoldur Story shows, it doesn’t tell, and at its foundation is a puzzle game wearing an old school adventure game’s clothing. After crashing on a mysterious island the protagonist travels armed with only a shield, going in any direction, as there’s no right answer or order to tackle the map or dungeons.

Skjoldur Story doesn't have a long tale to tell, but it is packed full of puzzles galore, and put into a colorful world that is fun to explore. It can be frustrating when you have to repeat yourself when you die. Skjoldur Story can feel like a nostalgic trip, so fill up the tank, grab some snacks, and buckle up for the journey.