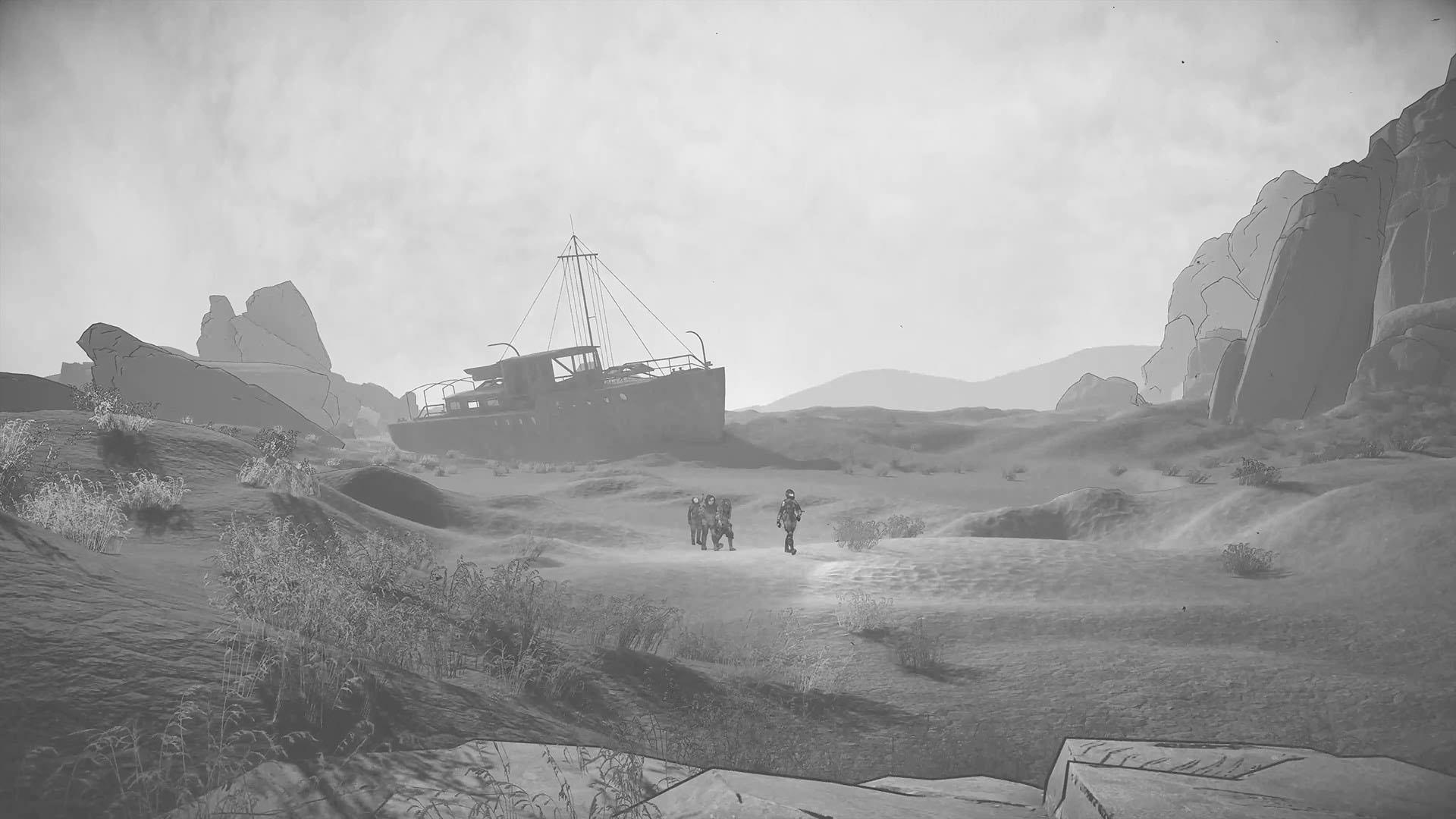 If you think I’m going to play some sketched-out, desaturated, volcanic apocalypse of a survival story—you’re 100 percent right. Ashwalkers (colon A Survival Journey) is about humans living on duct tape and a prayer. It’s The Oregon Trail, but with far more ethical dilemmas and a lot less buffalo meat.

Congratulations, your team of four survivors have been selected to make a bleak and likely fatal expedition out in the volcanic wastes. Your mission is to find the Dome of Domes, a shelter that is theorized to have had the highest probability of survival in this ashy post-societal survival adventure.

While the journey makes the destination worthwhile, Ashwalkers sports 34 different endings. That would be a save-scumming nightmare if this were a 24- or even 12-hour game. But a beginning-to-end run through the vulcan wastes takes between an hour and a half to two hours. 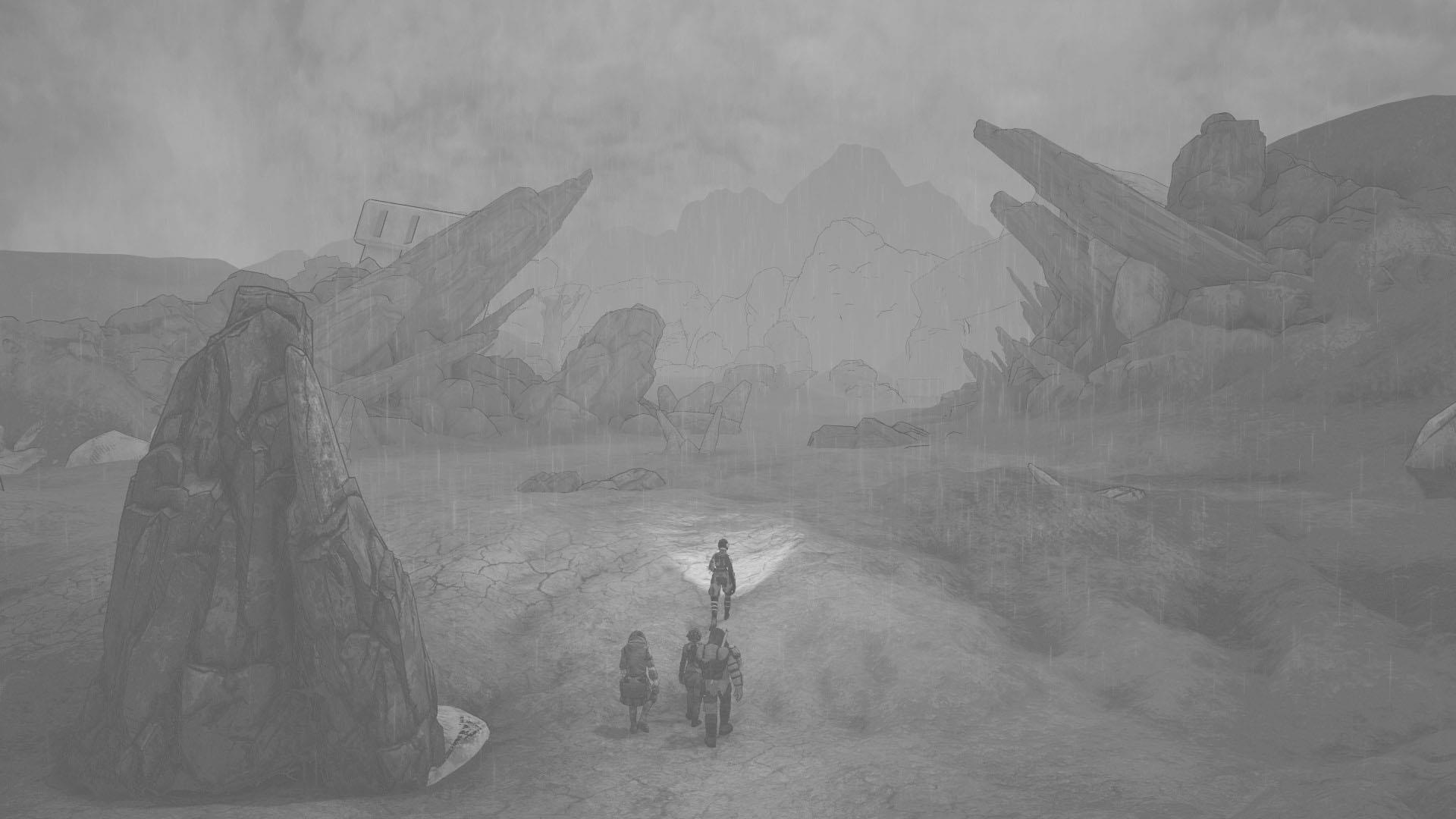 Complete the journey once and you can customize your starting point on your next try. I tried that once. Didn’t like it. Just being spit into the end game didn’t make me feel like I’d earned the next ending I got. Weigh that option carefully. On the one hand, I want to see the 34 different endings. On the other hand, I’m probably incapable of handing this game 34x two hours of my regular workweek.

Besides, there are a few major forks in the road along the way. Don’t want to miss those. Getting through it might take you up a mountain or down a valley. Taking a left might have more animals to deal with, taking a right might have more people. It’s unclear which one might prove the more dangerous route. Far more interesting to cherry-pick a new route than rehash an old one, though. 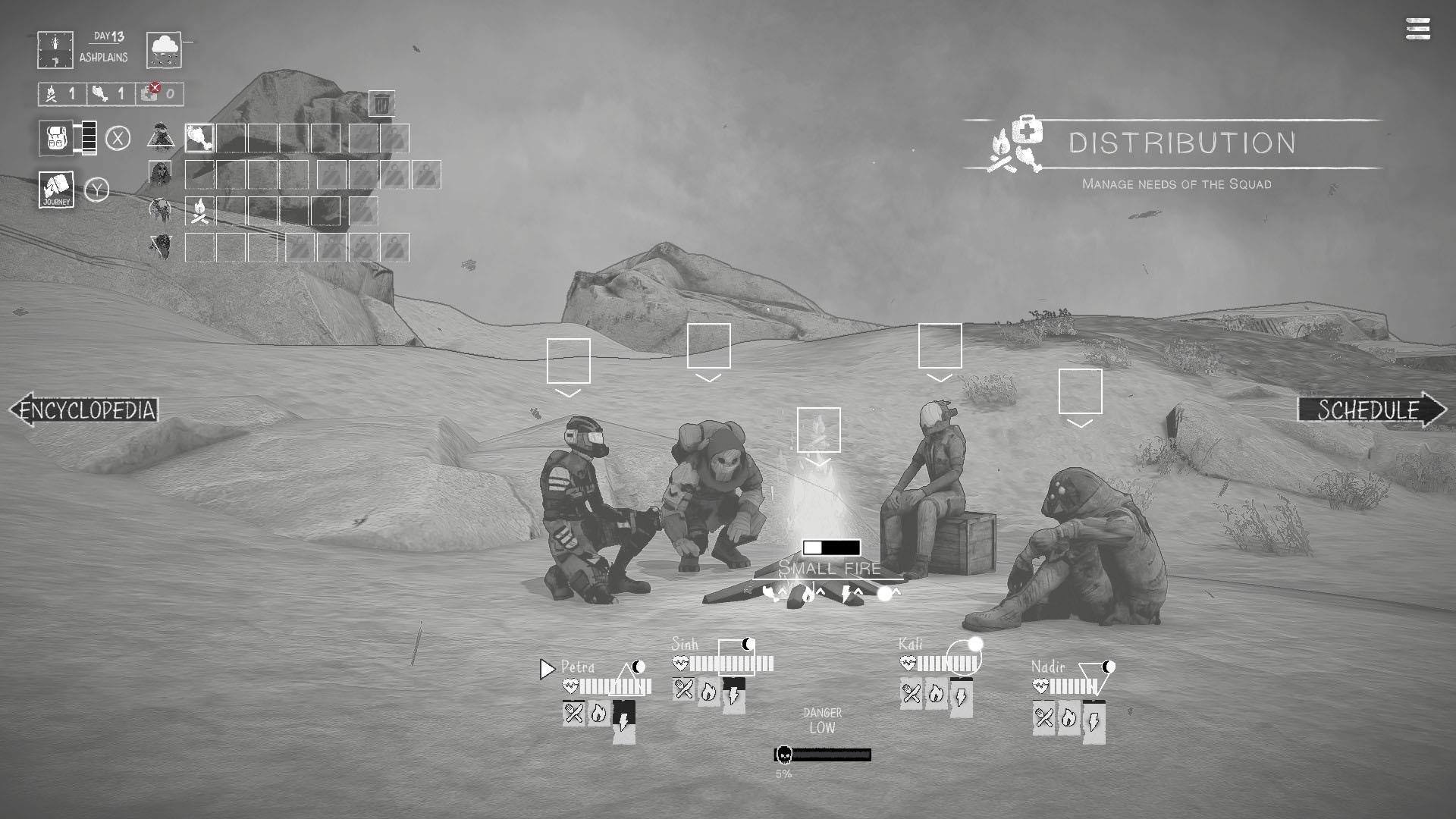 The day and night cycles are vague out here in the ash lands. Without looking at the clock in the corner, it’s sometimes hard to know where dusk ends and dawn begins. Guided by elegant cutscenes of dotted lines drawn across maps, following point-and-click lite text adventure writing, your team of four has several internal and external stressors to work through.

I’m slowly hurried (if that’s a feeling a game can convey) from beacon to beacon, the old, weathered technology looking more like space age stacks of stones than communications towers. These beacons are crucial milestones. Your team taps into the radiowaves and talks to homebase. They want to know how the search is going. Are you on the right track? Is everybody going to survive the journey? 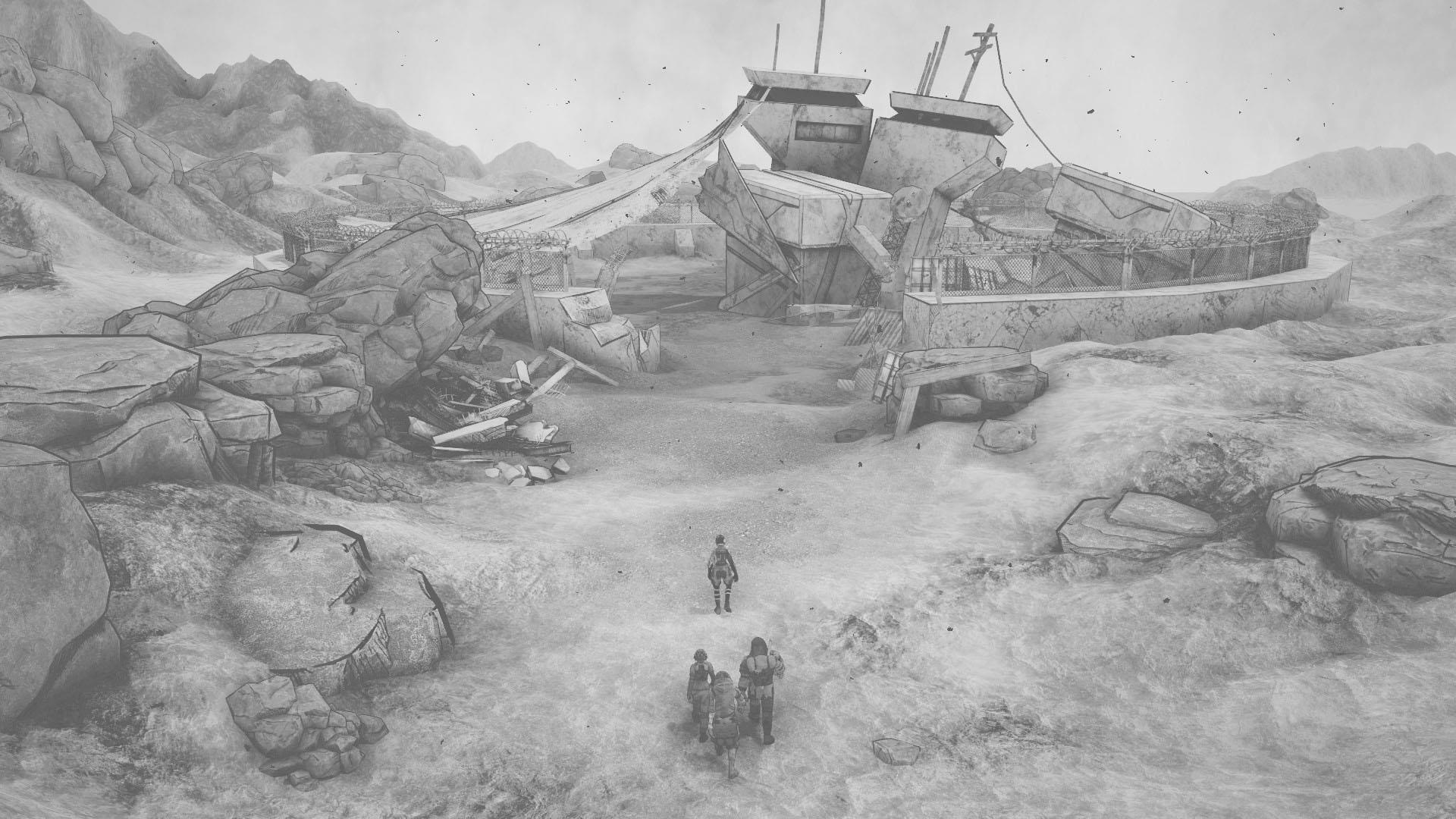 Ashwalkers is quietly, almost with a whisper, reinventing the adventure game genre. Well, it’s at least exploring adventure games’ shared border with survival sims. Plus its gentle descriptions, coupled with desaturated visuals, feel like you’re reading a confident choose-your-own adventure, pulling it right off the page and letting it walk through your imagination.

You sometimes watch your squad calmly advance across nothing but sandy plains. Other times you’re fighting the camera angles in some uncooperative interior design. You might sit and enjoy the pale light of a campfire, listening to them chit chat about this and that. Future mistakes, past hopes, the current and very real waking nightmare they’re living in. There’s a lot to talk about. I wish they’d talk more during those fireside chats. The writers spilled most of their ink around their 34 different endings. That was a good plan. I just kept wanting to have more meaningful banter that would help me get to know our four intrepid heroes. 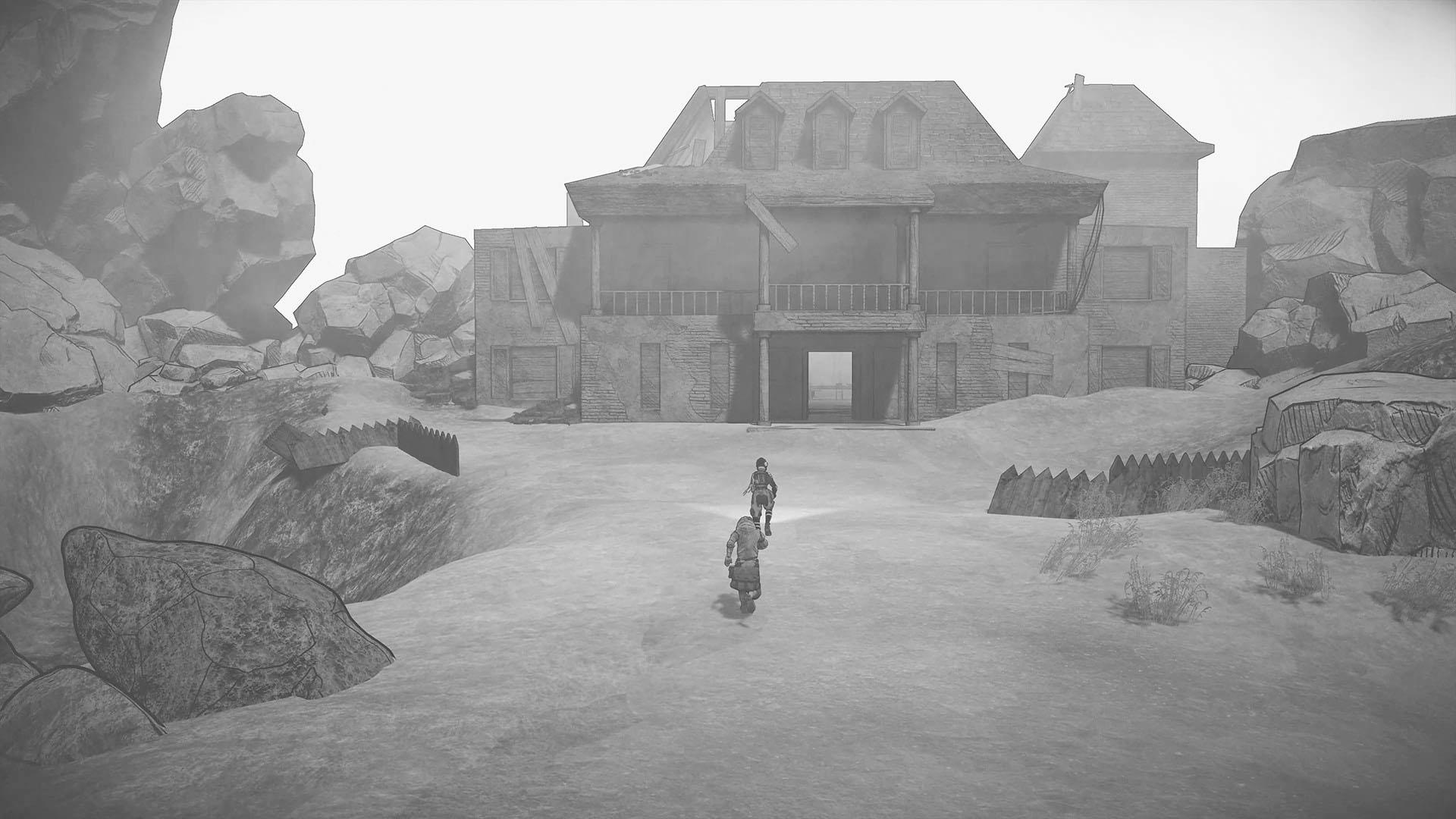 Somewhat less fun, gameplaywise, is flipping through your party of four, seeing who’s got slightly more energy than the next party member, and seeing who’s not going to be over encumbered by taking on another chicken drumstick or bundle of firewood. It’ll really break your heart when you have to start throwing away perfectly good first-aid kits because you’ve run out of (intentionally) limited inventory squares.

Your actions are executed with a frighteningly true-neutral bearing. Whether you’re kind to two “savages” pulling a sled, or you murder them on sight and take their supplies, no one in your crew says anything about it. No one is emboldened or discouraged by your actions. I mean, that’s cold. I was only testing the limits of what my team would do. But they have no limits. They just do whatever you decide. That double murder we committed had been the most frightening thing we’d done so far. No one flinched.

There were consequences, though. Later, we encountered a related scenario. What we had done earlier mattered. Good that there are consequences. Bummer that your people don’t discuss them. Decisions that feel like they should have moral weight often only feel like they have inventory weight. 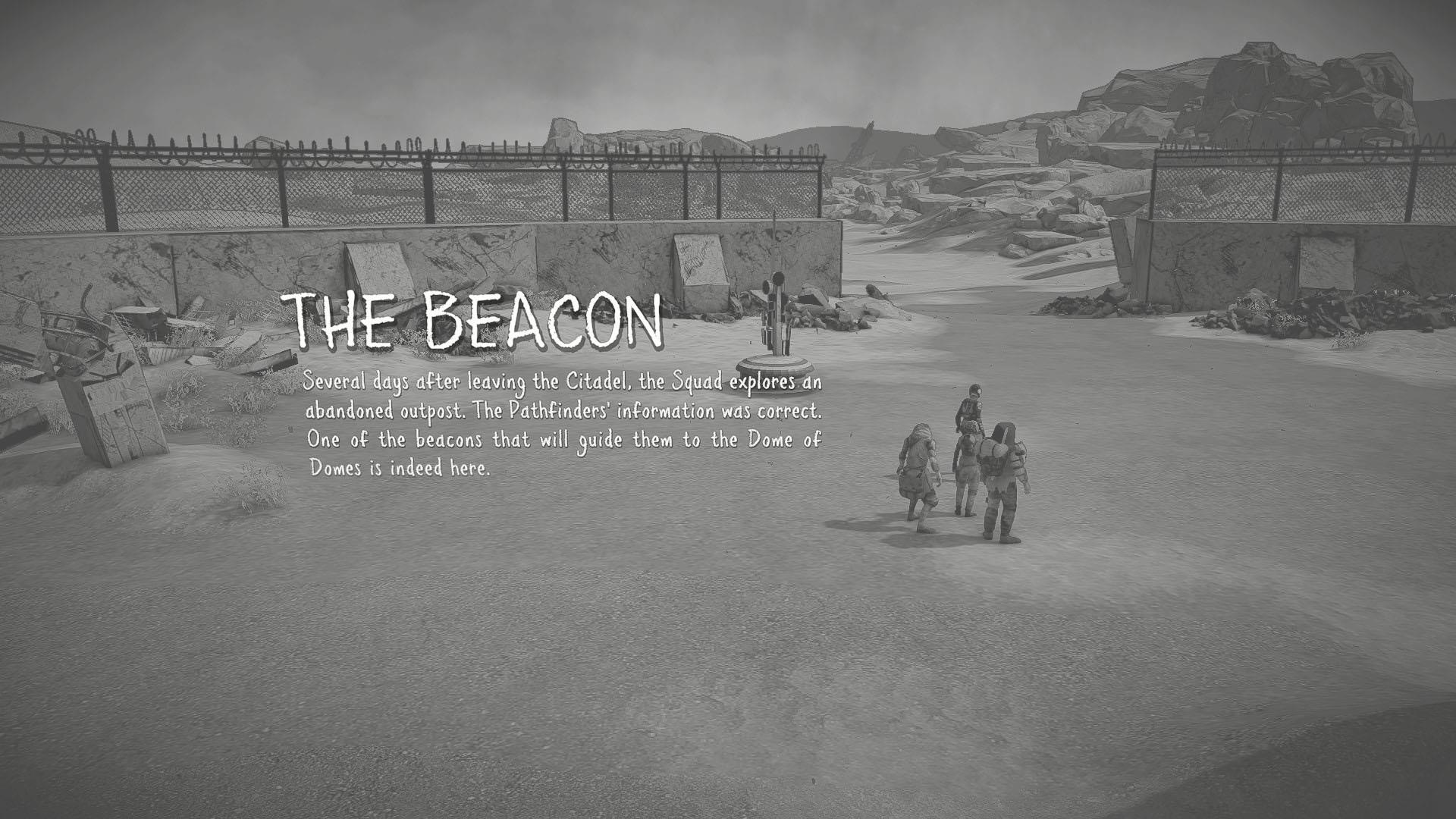 It’s startling seeing red splotches on my team’s clothing, signifying their wounds. Wounds that were either unavoidable, or mishaps due to my poor leadership. There were times when my crew was fully healed, however, and the red stains were still staring at me. Perhaps there’s no way to get those spots out, once they’re there for the chapter.

When you set up camp for the day, a little experimentation goes a long way in revealing each team member’s strengths and weaknesses. Kali is your leader, a great conversationalist that can boost morale like nobody’s business. Nadir is your sneak, scavenging while everybody is roasting marshmallows. Sinh is your muscle, ready to solve any and all problems with their fists. And Petra might’ve just been plunked into a pseudo-leadership role because she’s a jack of all trades.

Between the written dialogue, the guitar-strummed soundtrack is nice. But the ambient sounds are like a white noise generator. A different hollowness, or fullness, adds texture to every scene in the desert, in the mountains, and in the urban ruin. On occasion, the soundtrack dips into moody synths, clearly paying homage to Blade Runner’s soundtrack. It’s all melted-sounding horns and brassy notes of danger. Or a windswept AM radio static prods its way into the group’s atmosphere. 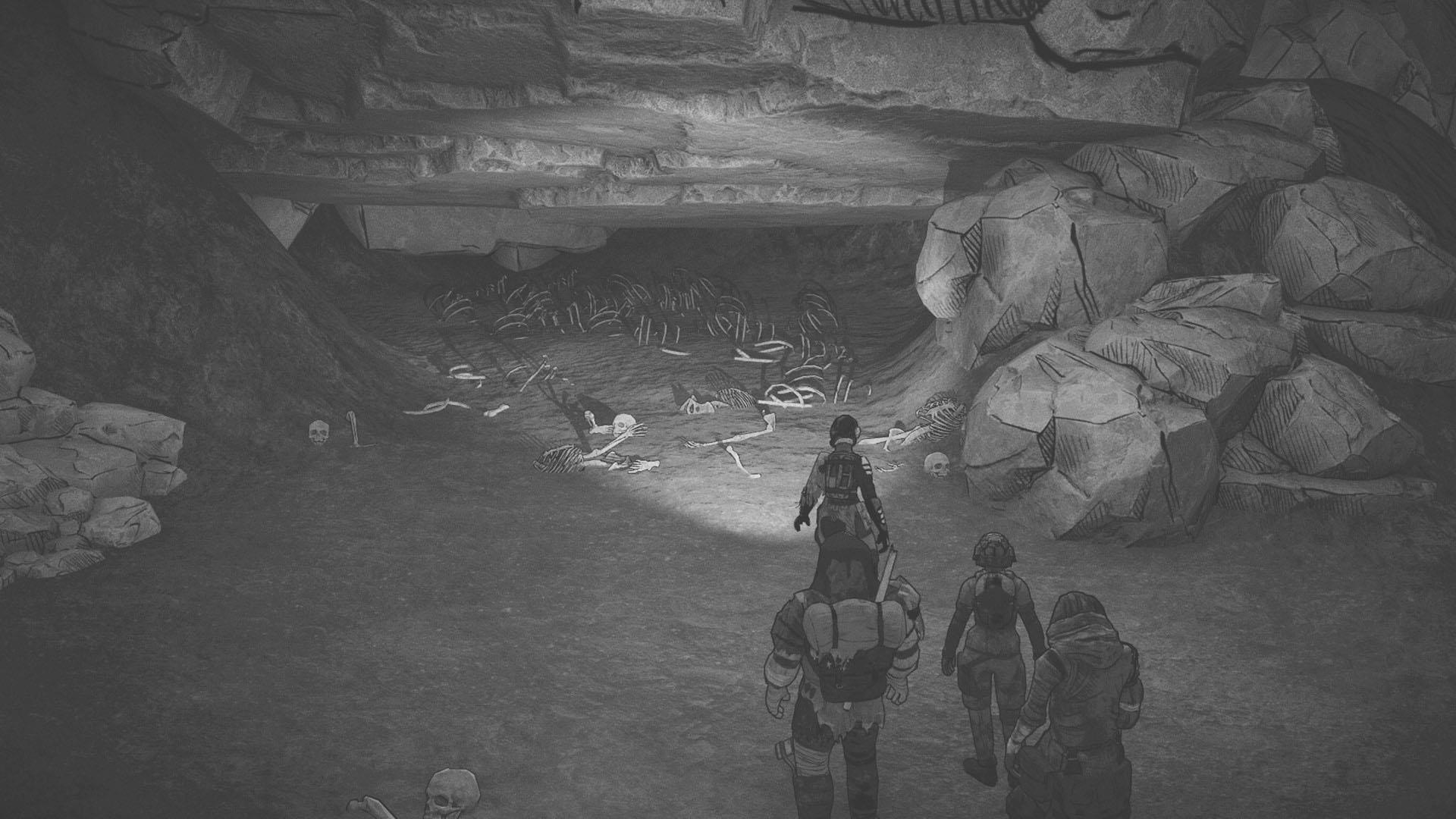 While it’s not much of a musical journey. It’s a tonal one. One worth the walking speed. Despite one game’s relatively short two-hour length, the deliberate pacing made every step of the way more meaningful. Sprinting around would’ve made the time worth less.

This is an adventure game first, and a survival game second. The wood and food is easy to spot along the trail, lights streaming upwards so that you won’t accidentally miss them. And you just click on the resources you find. No need to chop down trees or, beyond what some of the text dictates, no need to physically hunt for food.

It may seem rote simply throwing this many logs on the fire, or that much food down your squad’s gullet. But it feels good to say to yourself, “Everybody eats tonight.” On the flipside of that coin, there were times when I wanted Ashwalkers to give me its worst. I wanted it to be brutal. This is “A Survival Journey”? It certainly says so in the subtitle. Well, if that’s so, get difficult. Go all Darkest Dungeon on me. Make me fear for my life here.

Rarely would I fear for my life. 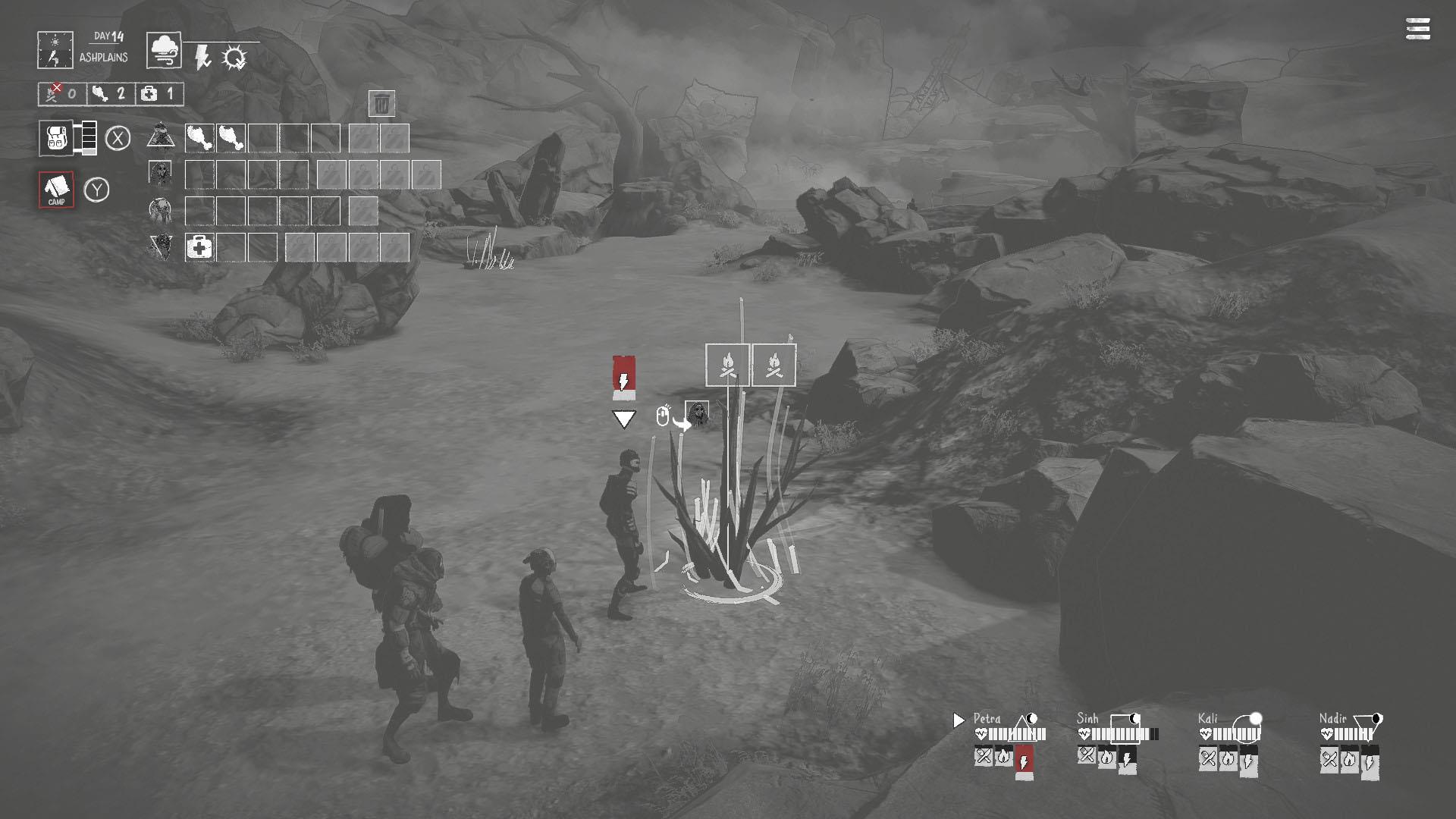 But when it comes to the end-game’s Big Huge Decisions, I’ll admit I was stumped. Stumped many times. At least one of them felt helpless and heroic, while another felt like the classical Ethics 101 Trolley problem. One ending felt accidentally ideal. Another felt like I shouldn’t have been the one making the decisions—not by a longshot.

Exploration is discouraged. Everything you need is along the path. And walking off the path on the very short leash your given makes the clock tick, wastes energy, further exposes everyone to the elements, and makes everyone hungry besides.

Ashwalkers promises a dreary trek across low-poly wastelands—and it delivers. It also seems to promise a tale rife with moral dilemmas and unassailable camaraderie—which it doesn't hit hard enough. The biggest dilemmas are often too big to comprehend on a human scale. And the human interactions left me cold and calculating when they should’ve had me digging in my heart of hearts for the answers.

When you’re advertising 34 different endings, your survival journey needs to be survivable. But Ashwalkers rarely made me feel like my survival was on the line. I was hungry for more human interactions between squad members. But the bulk of the writing is saved for the badge-ridden hall of fame at the end of this post-apocalyptic Oregon Trail.