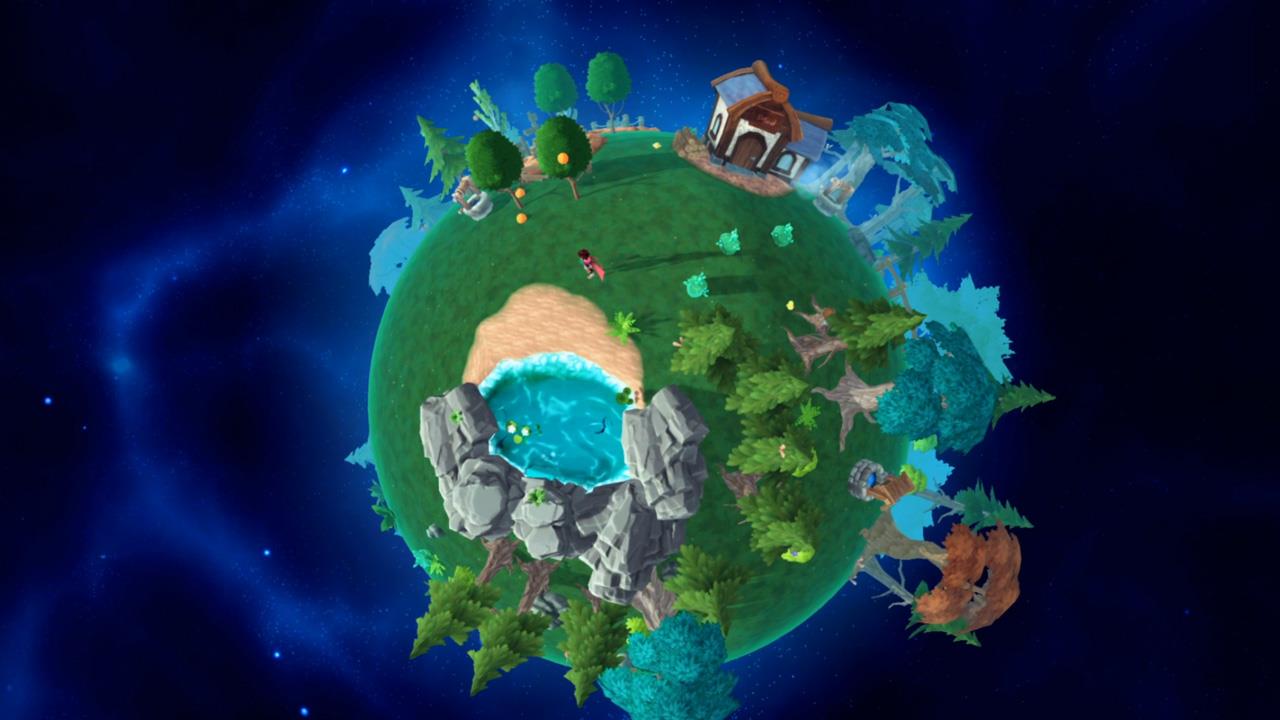 Deiland: Pocket Planet Edition is a nice, charming game that I enjoyed my time with. It is also a game that I’m not certain I can recommend to others, at least not without some serious caveats. While I was happy to spend hours zoning out to Deiland’s mellow vibe, players that are concerned with gaming mechanics like progression, quests, and any sort of organized experience will likely end up banging their heads against the wall in frustration.

Deiland: Pocket Planet Edition (hereafter known as Deiland) has a pretty fun hook. The game take well-known farming game mechanics and transports them onto a tiny Mario Galaxy-style planet. The main character – and inoffensive giggly amnesiac prince – can circumnavigate the globe in about twenty seconds, removing “exploration” from the game mechanics table right out of the gate. 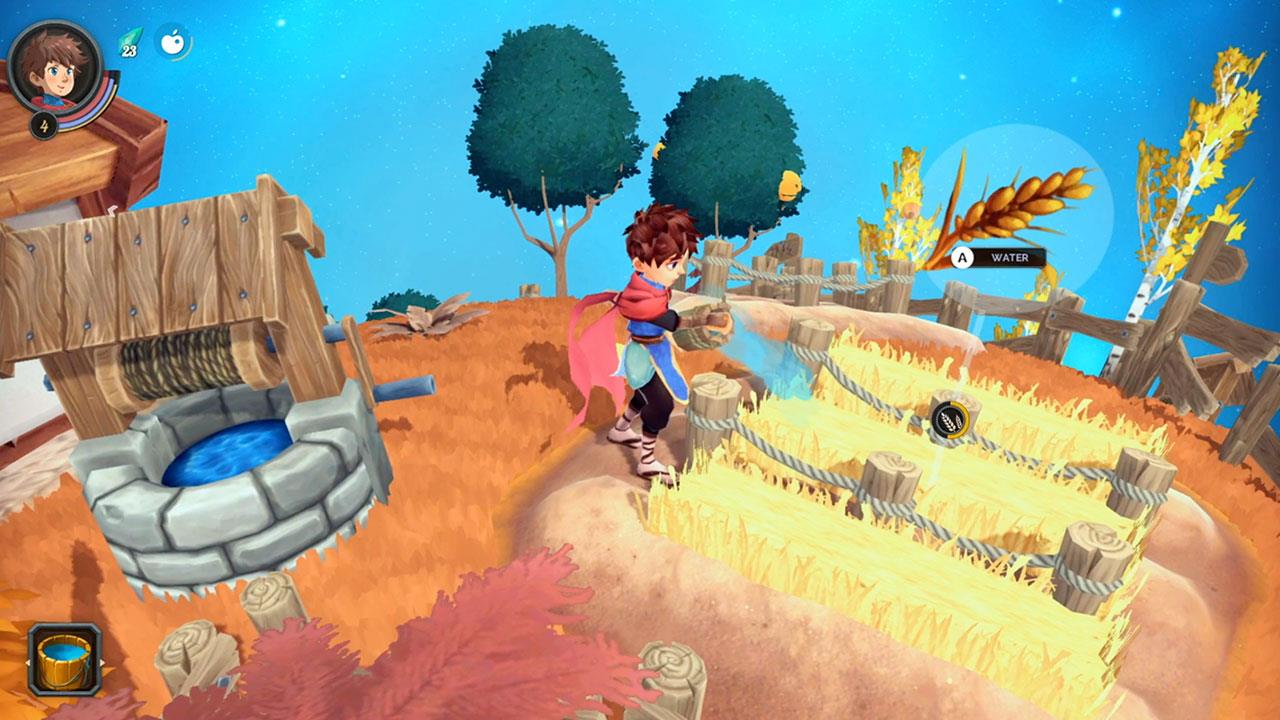 Still, there is a lot packed onto this little world. Our prince has a little house that he can work to upgrade, several fields to farm, a small lake to fish in, and plenty of rocks to smash for minerals and other materials. Eventually, the player will unlock a small mine to visit, and all of the areas can be upgraded or improved in various ways. Knowing where everything is, and being able to get there quickly, is actually kind of nice, removing long runs from the game entirely.

Right out of the gate, the prince gets started constructing the usual tools of the trade. A hoe, and axe, and a hammer are quickly added to his toolkit, allowing him to sow seeds, chop trees, and smash rocks. You really, really know the drill here if you’ve ever played a casual farming game. The player slides into a cycle of planting trees and crops, then harvesting the goods and seeds to grow more. During the plentiful downtime, plenty of rocks are strewn about waiting to be smashed, and selling the hundreds accumulated can help establish an early flow of income. 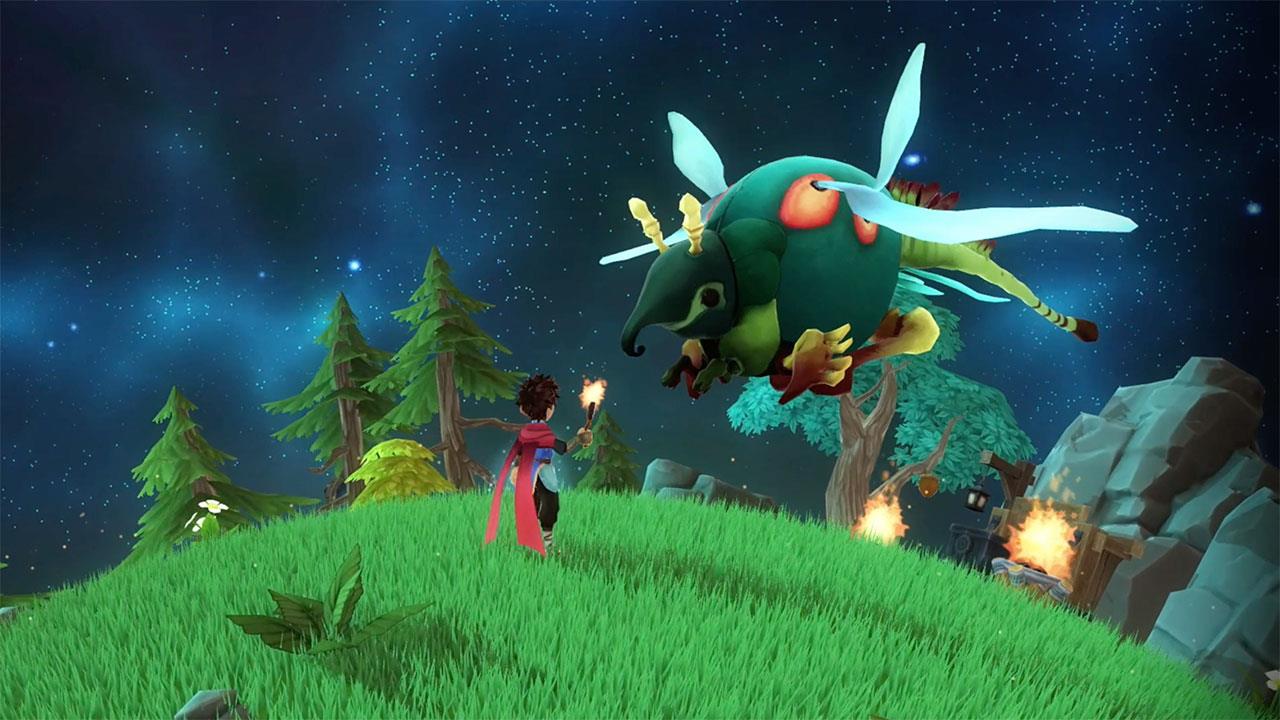 There is also a very simple but crushingly frustrating fishing minigame that allows players to catch fish, but that is best avoided unless it is absolutely being demanded by the game. Beyond the hateful fishing, everything in the game feels basic, but pleasant enough.

Occasionally, a meteor or two will crash down to the planet, and the view pans out to allow the player to spin the planet so that the meteors land harmlessly. Meteors always arrive from the upper right corner of the screen, so there is zero challenge involved with spinning your home out of the path of impact. Meteors sometimes deliver “seeds from other parts of the universe”, which can expand your farming efforts. Minerals and goods also occasionally appear in suitcase-like objects that are dropped from the sky

Maybe once every fifteen minutes, monsters show up on the planet, and the game forces the player to drop everything and go slay them. Combat is beyond simple. A couple of sword swipes, and down they go, leaving behind materials. I never once felt challenged or the slightest sense of danger from monsters. Like the rest of Deiland, they are cute and harmless. This is the perfect sort of game to share with a kid to introduce them to these time-tested and much loved farming mechanics. At least, it would be if it didn’t become so obtuse in its middle hours. 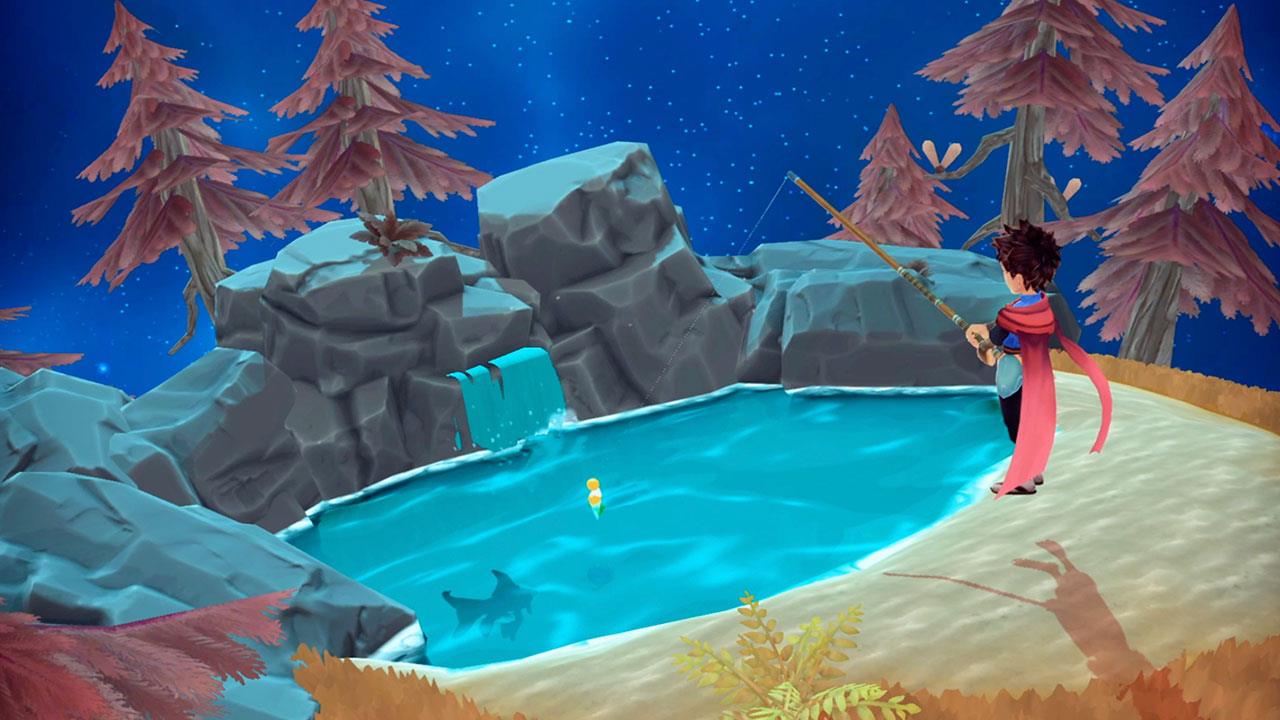 Over time, spaceships start showing up on the planet, carrying various characters that assist the player by delivering recipes and goods (some of them do double duty as merchants) and assigning quests. And that is where some of Deiland’s problems start appearing.

Visitors often assign the little prince tasks to do. Once completed, he is rewarded with a new piece of functionality – a recipe, a new seed, a new upgrade to his equipment. So basically, all progress comes to a halt until the prince can achieve the goal. Sometimes the prince already has everything he needs for the quest, and can turn it in immediately and collect his reward. But the fatal flaw in this system is that sometimes the quest-givers ask the prince to make something out of materials that he does not yet have access to. And since he can’t progress without completing the task, the game grinds to a halt until the item appears.

For example, at one point the space-chef character tasked me with making pancakes for a different character. Fine. No problem. I like pancakes. But – uh-oh - the recipe called for two jars of honey. I had one jar in my inventory, with no idea where it came from. Honey was not a resource I could produce or scavenge. I anxiously awaited the arrival of each of my space visitors, hoping that I could buy honey from them. Nobody had honey for sale. I got super excited when a bee monster showed up. But no dice. Bees drop wings, not honey. 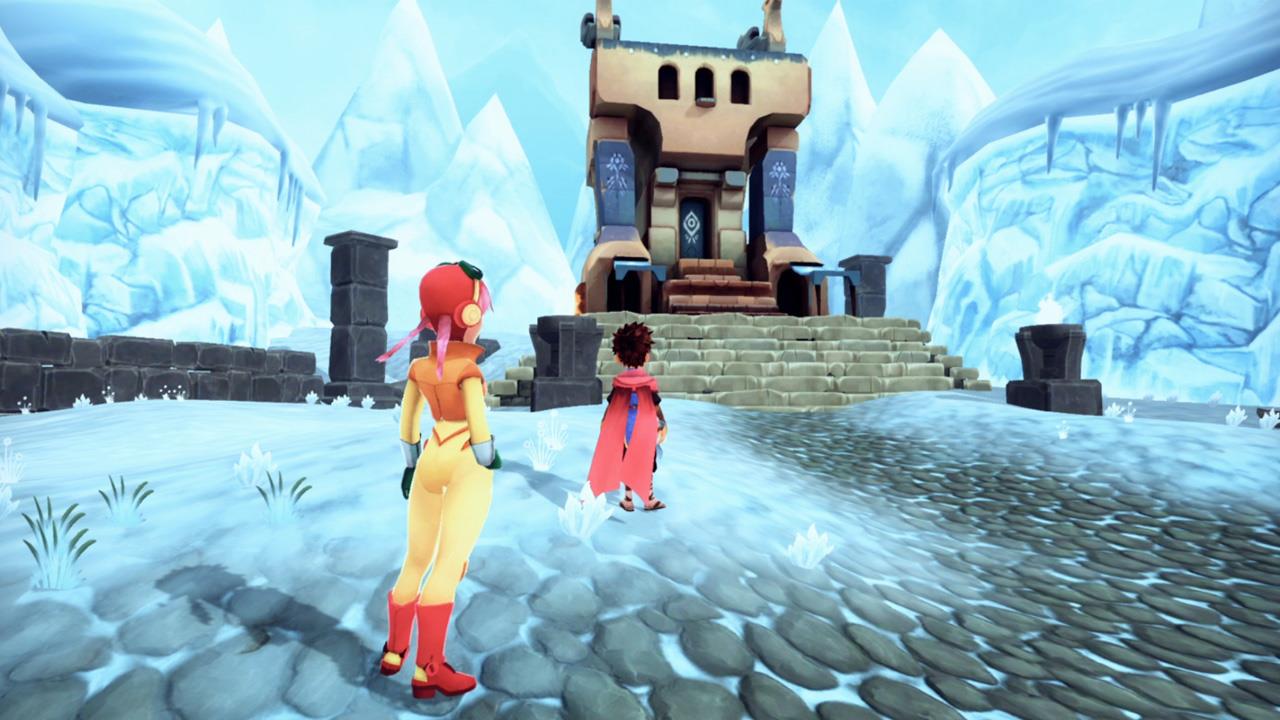 So, what did I do? Well, I planted a lot of trees and pumpkins, and smashed a lot of rocks waiting for the situation to eventually resolve itself. I meandered aimlessly across the planet, wondering if I had missed something. I grew cotton and made fifty ropes. A few hours later, I noticed that more honey had shown up in my inventory. I have no clue where it came from; maybe it arrived on a meteor. But I was able to complete the task and move the game forward.

It is this sort of inattention to the player’s experience that makes Deiland: Pocket Planet so frustrating, while still being incredibly chill. While I enjoyed planting groves of trees and upgrading my house to include a kitchen and workshop, I had to spend hours simply wandering the tiny – and in this situation, rather uninteresting – planet.

It’s entirely possible that something broke during my playthrough. Perhaps I encountered a bug that others will not see. But this honey situation was not the only time I was stumped by Deiland. Other quests (in particular, one involving pumpkins needing to be planted under the moonlight) need to be resolved in very obtuse ways, without offering the player nearly enough direction. It can be a relief, but not quite satisfying, when you finally figure out what to do (or when you simply give up and resort to Google).

Deiland: Pocket Planet Edition eventually expands outwards, and the prince does eventually get off the tiny planet, not that it is a terribly oppressive place to be. But I imagine that many players will bounce off of the game before they hit that point, either from frustration or a sense of been-there=done-that.

Don’t get me wrong, I found most of Deiland: Pocket Planet Edition to be quietly charming. But when a few moments of directionless gameplay swell into hours, frustration sets in and the game becomes a bit of a slog. With a few simple adjustments to the flow of the questlines, Deiland could quickly be converted to a winner. But until then, keep an internet browser close at hand, and be prepared for a few problems even a walk-through can’t solve.

Deiland: Pocket Planet Edition has a lovely, relaxing vibe, and some pleasant, very recognizable farming mechanics. But some quest problems lead to frustration – and worse, hours of bewildered wandering. When progression grinds to a halt and there is nothing to do but grow endless crops, Deiland starts to feel less pleasant, and more like a purgatory.