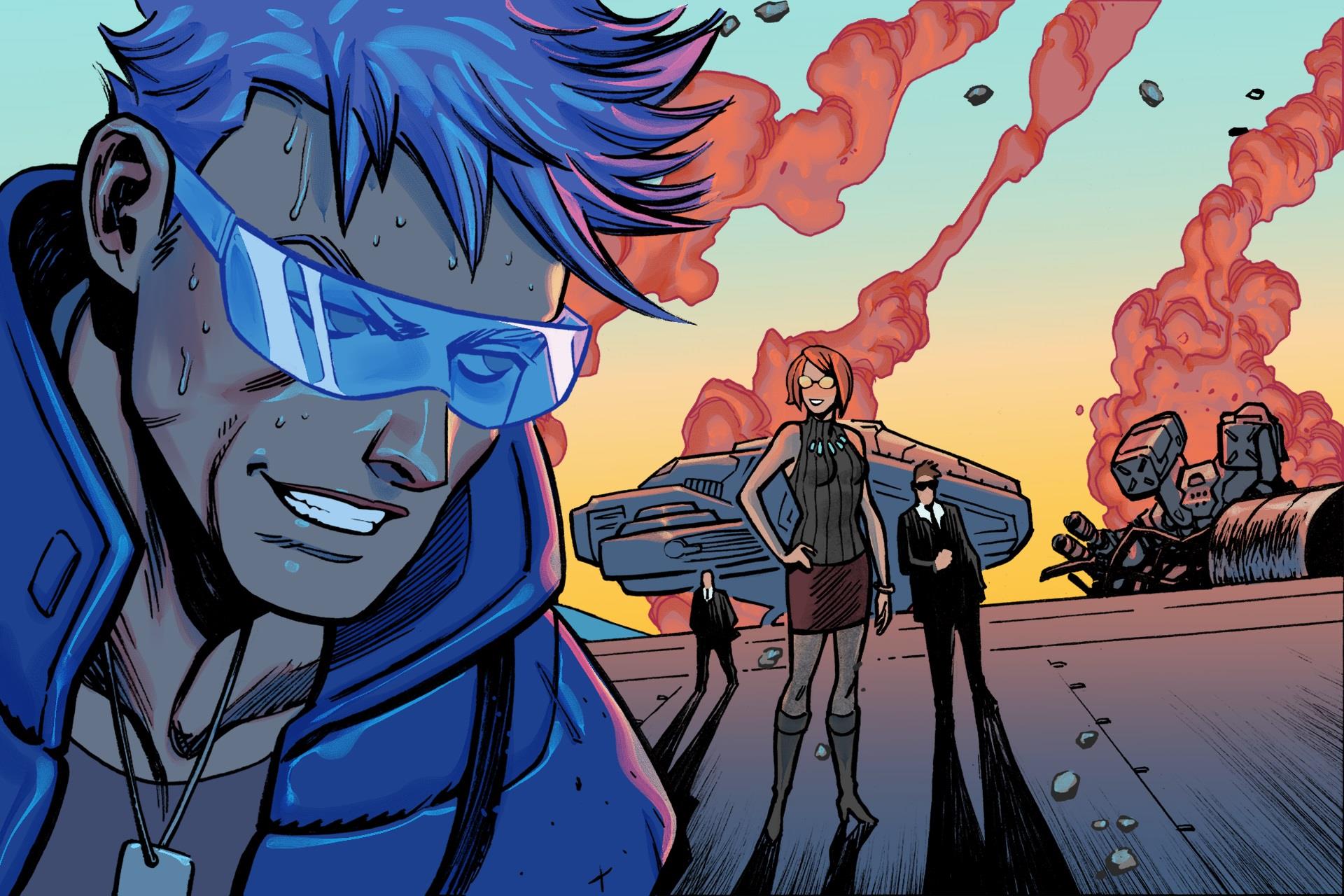 I hopped onto Open Critic and scrolled backwards through every single review I’ve ever written just so I could feel comfortable stating the following without being hyperbolic: SWARM is one of the best action/arcade VR game I’ve ever played. This is a top-tier VR title, right up there on my personal favorite list with games like Pistol Whip, Iron Man VR, and The Walking Dead: Saints & Sinners. What SWARM accomplishes is utterly unique in the VR space—wickedly fast twisting, turning motion, delivered without a trace of VR sickness. And I would know, as I’m one of the most VR-sickness-prone VR fans around. 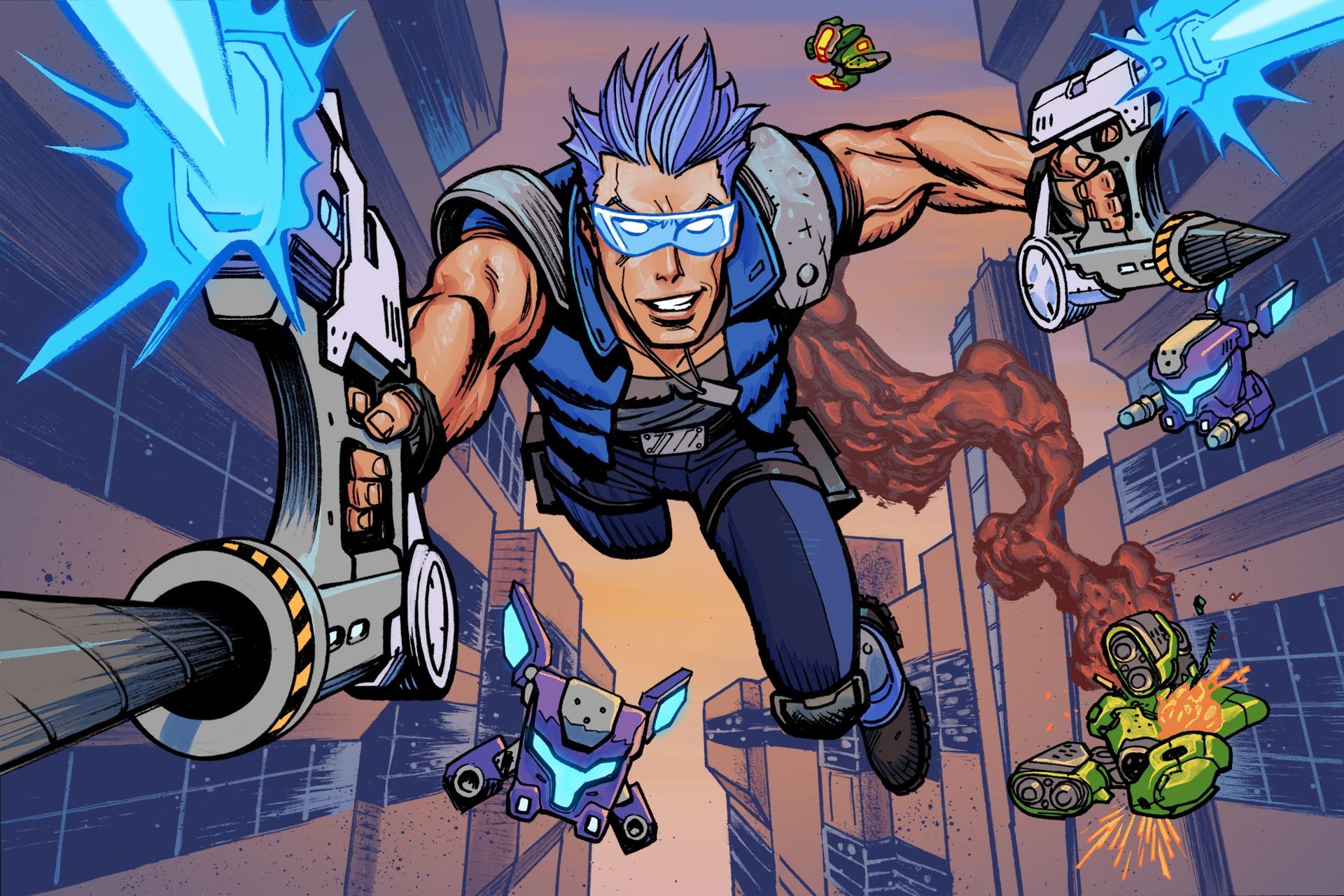 Before I get into my theories on how the team at Greensky Games accomplished this miracle, let me quickly break down the basics. SWARM’s setup is simple but fun, delivered in a quick series of amusing 3D comic book-style panels. Alien robots have invaded the earth. They are swarming all over the place, blowing stuff up. The player, taking on the role of an overly confident wisecracking sci-fi badass, is called in to stop the rampage.

That’s all the story that SWARM needs, because this game is all about the action. Levels are made up of a series of yellow-rimmed platforms, arranged up into the sky in dangerously high geometric patterns. An invisible column keeps the action contained in a tight area. The player holds a gun in each hand. Each gun can shoot and send out a grappling hook, but they can’t do both at the same time. The player’s goals are two-fold: shoot anything that moves, and don’t splatter on the ground below. 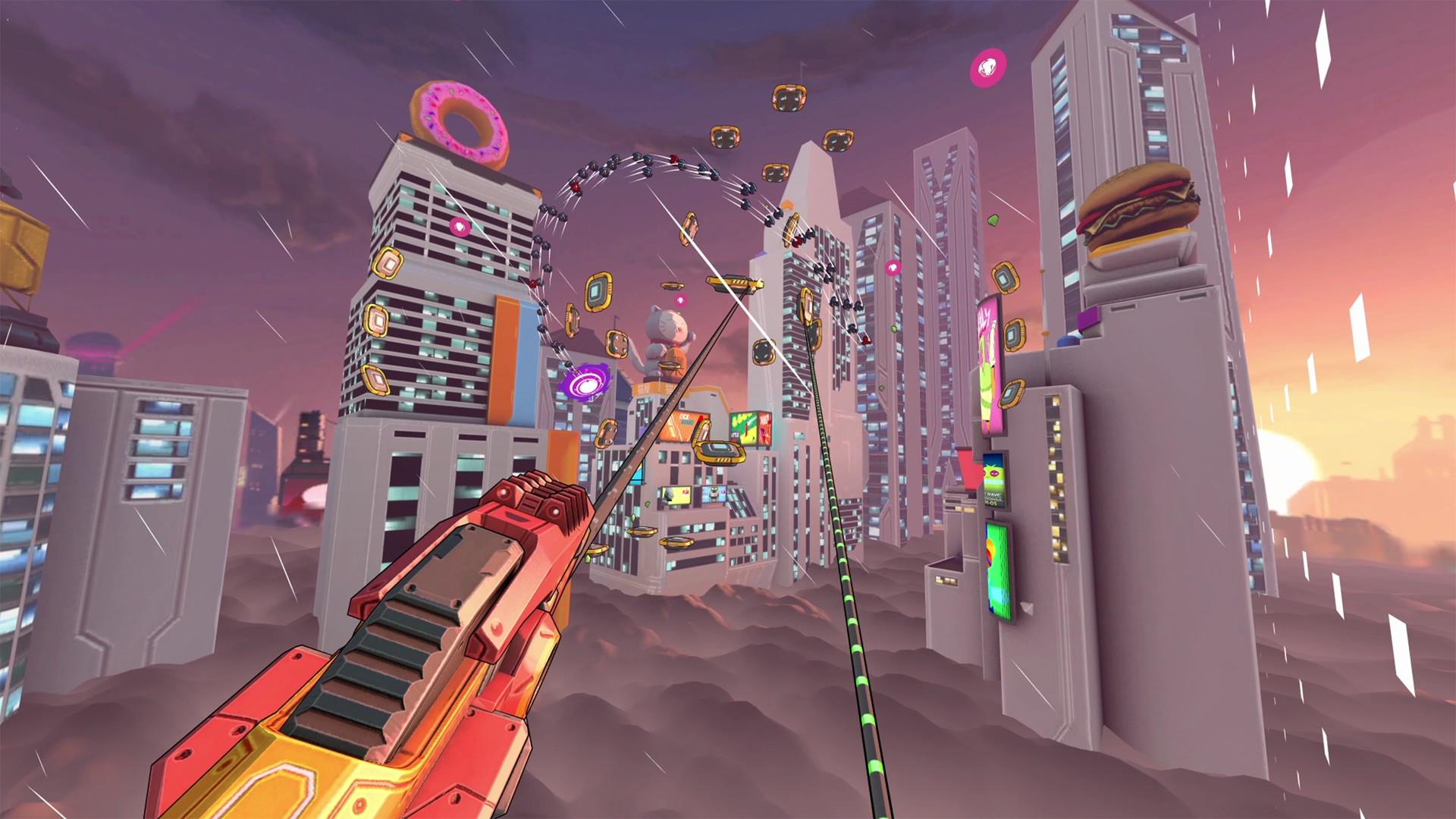 The grappling guns can instantly attach to any of the platforms, allowing the player to swing wildly through the battlefield like a hyper-violent lunatic Spider-Man. Enemies appear all around the level, sometimes swooping in battle formations en-masse from portals, sometimes warping in from points all across the sky. Players need to quickly master swinging with one hand and shooting with the other in order to successfully vanquish their foes and complete the level.

But that description doesn’t begin to do justice to the genius on display in SWARM. This is a game all about nonstop motion. If you slow down, or stop moving, or decide to hang from a single platform for a few moments to line up a shot, the pitiless robots will quickly zero in on you, resulting in a quick Game Over. I started thinking of SWARM as “Sky DOOM,” due to the way that it demands constant movement to succeed. You have to go, go, go, which is amazingly refreshing in a VR game—most of which contain carefully regulated movement to prevent players from getting that dreaded rumbling in their stomachs. 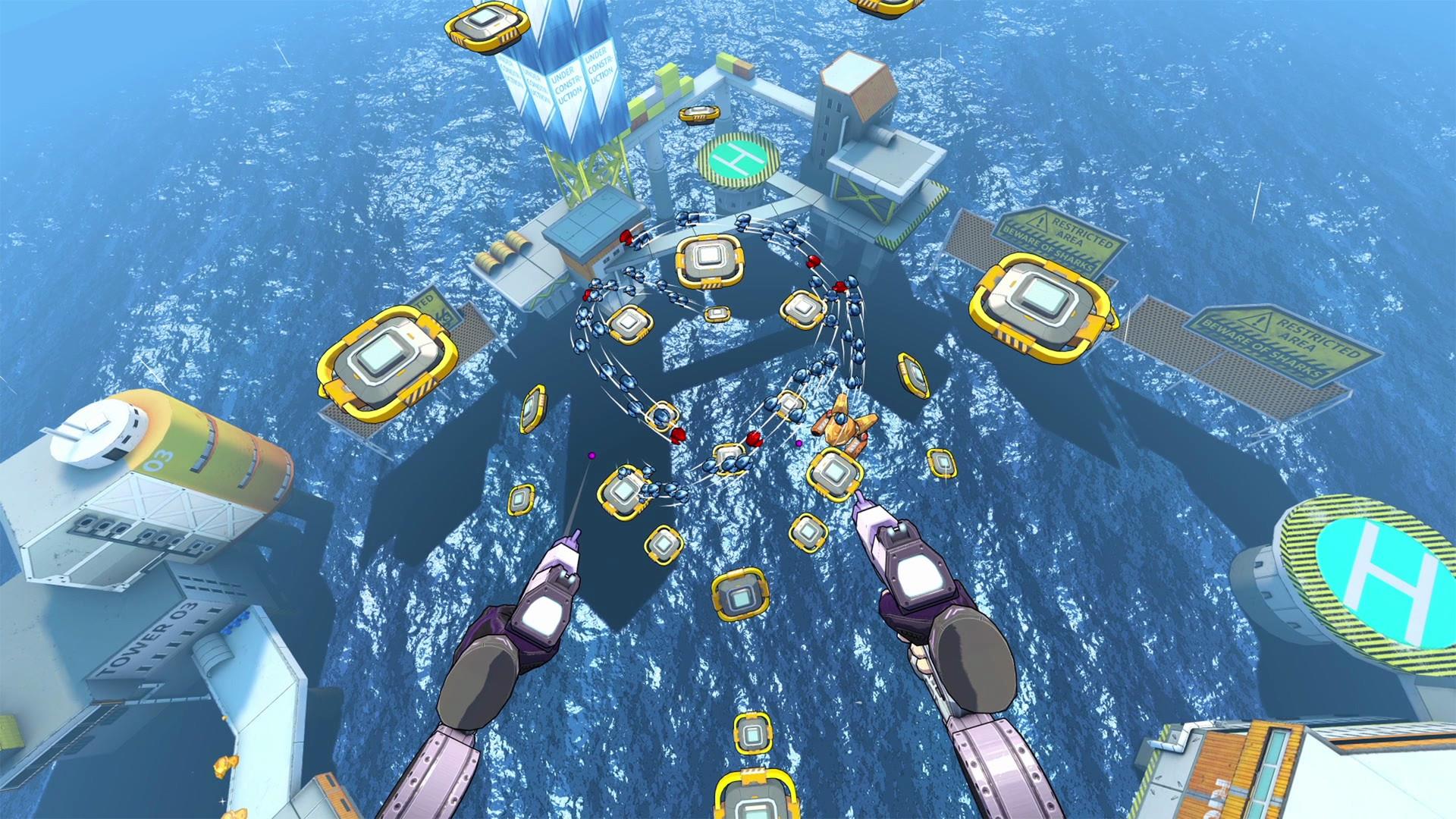 SWARM allowed me to pull off some wild moves that I would have thought to be absolutely impossible in VR without painting the room with my lunch. My favorite move is to grapple onto the highest platform and swing right past it, high into the sky, then twist in the air and plummet towards the ground, blasting away at baddies with both guns before saving myself at the last second from a splatty death with a well-timed grapple. In any other game, a move like this would have sent me scurrying for the bathroom, but in SWARM performing violent sky acrobatics only made me cackle with delight.

Which of course leads to the question of how Greensky Games pulled off such a whirling dervish of action without making players feel nauseated. My theory—and I could be wildly off base here—is that nausea is minimized by SWARM’s wide-open spaces. Each level in SWARM is designed to be outside; you can always see the sky, even when there are structures around you. When you are whipping around the platforms in SWARM, stuff moves around you, but you are not moving within an enclosed space. Walls don’t shift and turn around you when you swing through a gang of baddies. Instead, SWARM delivers fresh air and laser blasts, and the effect is incredibly energizing and liberating. I cannot express, as a person who gets VR sickness, how exciting it is to be set free to blast aliens while swooping through the sky. As opposed to making me feel bad, SWARM makes me feel good, which often leads to whoops of joy and inappropriate swearing. 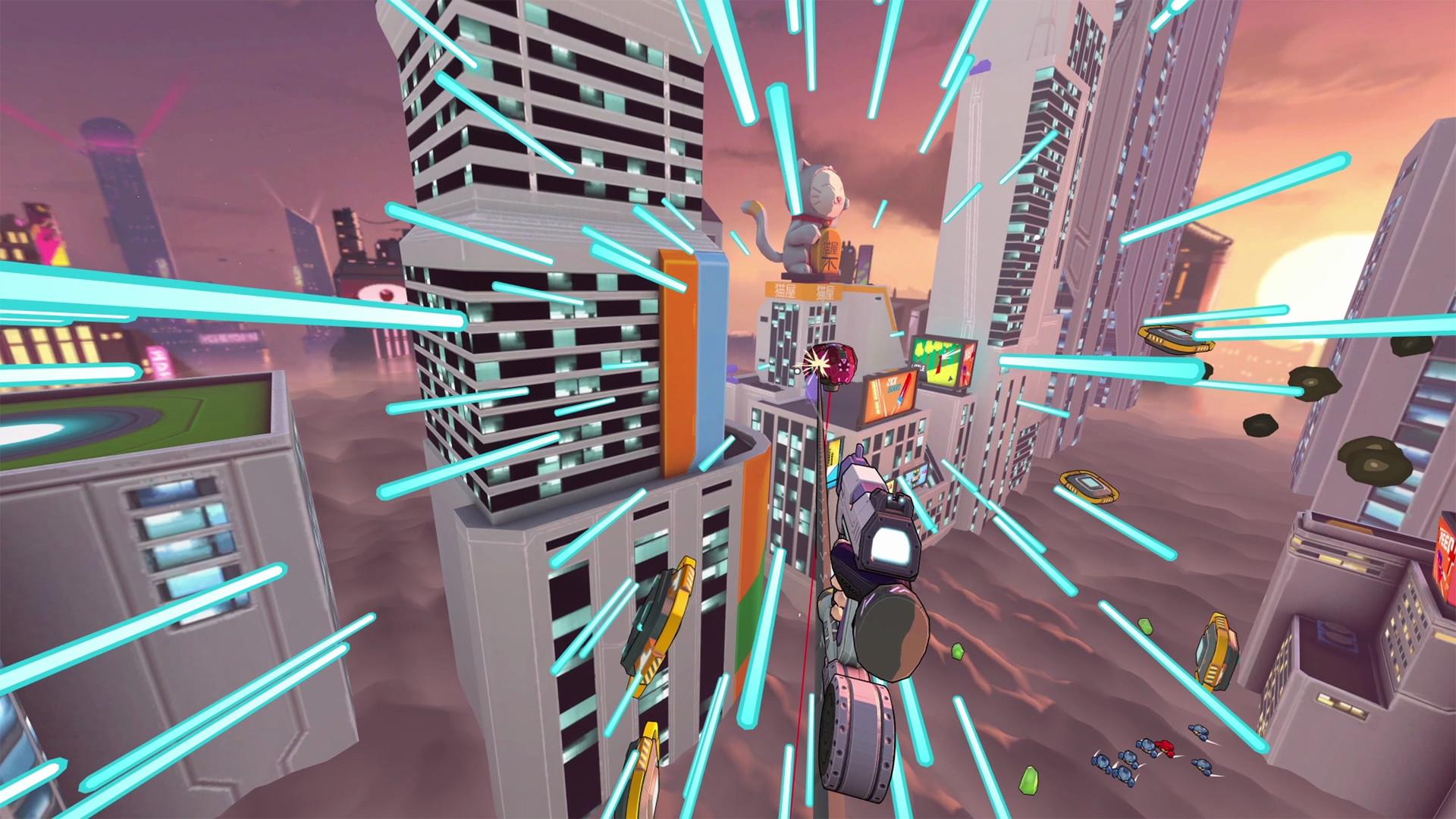 Structure-wise, SWARM is arcade to its very core. Twenty-five levels are broken up into five subsections, each of which ends with a fun boss level. Players fire away at alien robots, then scores are tallied at the end of each level and promptly displayed on a global leaderboard. Sometimes you have to shoot a certain number of aliens, sometimes you simply have to survive for a set amount of time.

Shooting every alien in a wave can grant you a huge point bonus, and blasting bad guys leaves green crystals strewn about the place, which increase your score multiplier. But I often didn’t even worry about the score. I was simply swooping and shooting for the pure joy of it. A few difficulty settings can be used to tailor the experience to your liking. I started out playing with the Casual setting to get my bearings, but before long the game poked me, asking if I was sure I didn’t want to bump up to Normal. Turns out the game was right, I was fine playing on the standard difficulty. 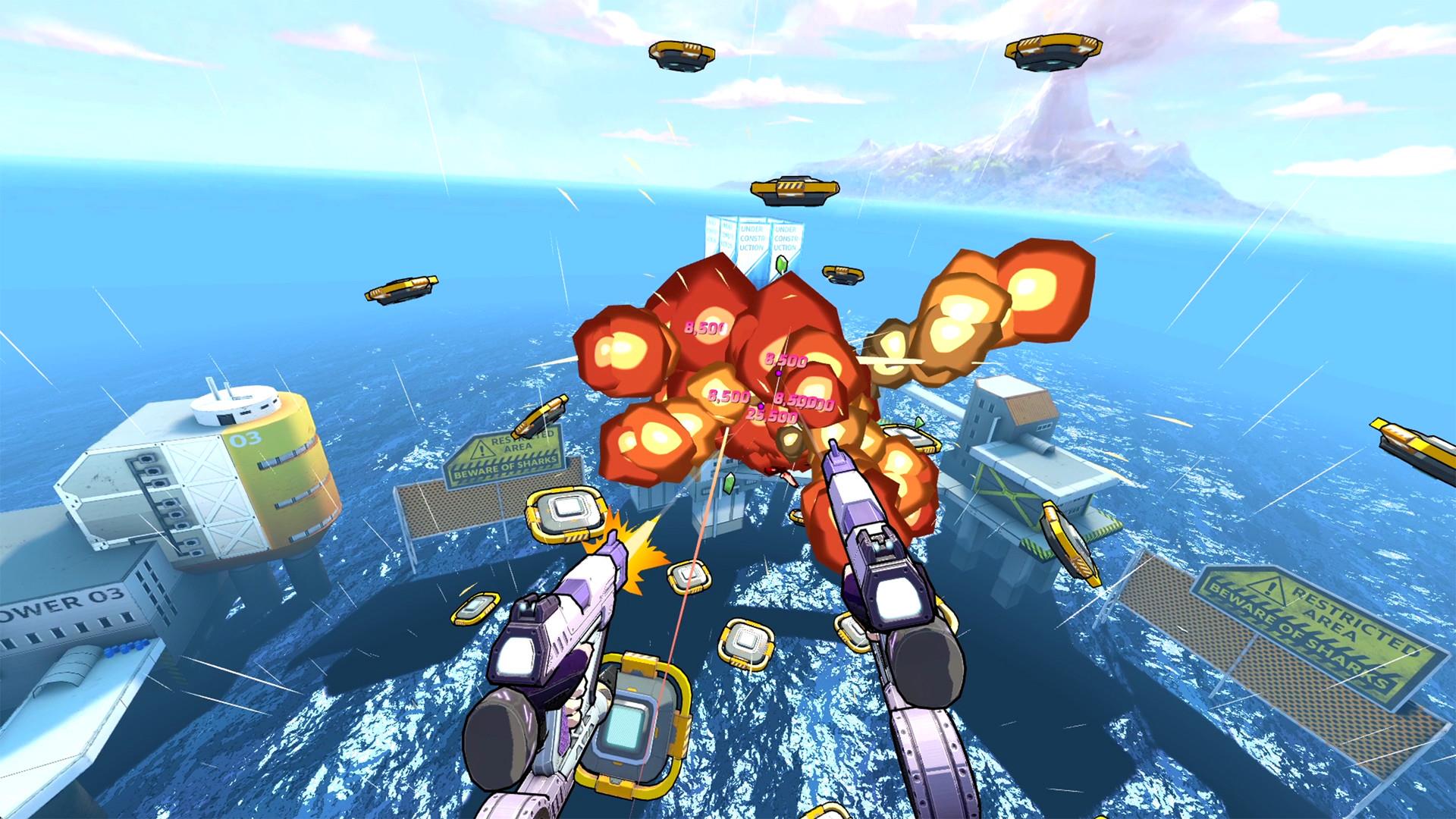 Levels are packed with a surprising amount of variety, and surprises abound. I laughed out loud when I plunged into the water on the first level, and the silhouette of a shark swam toward me and chomped me. Little touches like this really help elevate the experience. New enemy types are introduced as the game goes on, and the player eventually unlocks several new weapon types to deal with them—though your default weapons are highly capable as is.

You also gain a few superpowers fairly early in the game. Zip allows you to focus on a distant platform and send yourself hurling toward it—a surefire way to get out of the line of fire when things heat up. You also have the ability to activate a fun bullet-time slow motion mode to line up critical shots, which helps when you are trying to knock out a full line of baddies at once.

I played SWARM on the Oculus Quest 2, and I’m just gonna come right out and say this: I had no idea that the Quest 2 was capable of this sort of graphical intensity. I’m fairly new to Facebook’s newest standalone VR rig, and while I’ve been impressed by some of the games I’ve played, this is by far the crispest and cleanest I’ve seen the Quest’s visuals look. Of course, it doesn’t hurt that SWARM has a slick, cel-shaded comic book visual style, which allows for some pretty clean graphics while keeping textures under control. Nonetheless, this is one of the best-looking games I’ve played in VR on any system.

I played SWARM completely seated. Due to some current health situations, I can’t be on my feet for extended periods of time. But I had little problem keeping my view facing the right way by flicking the right control stick to turn in midair. That said, if you can play standing, I would assume that doing so would probably provide a smoother and even more immersive experience. Once I’m back on my feet, I fully plan on reengaging with SWARM in an empty room so I can spin freely. 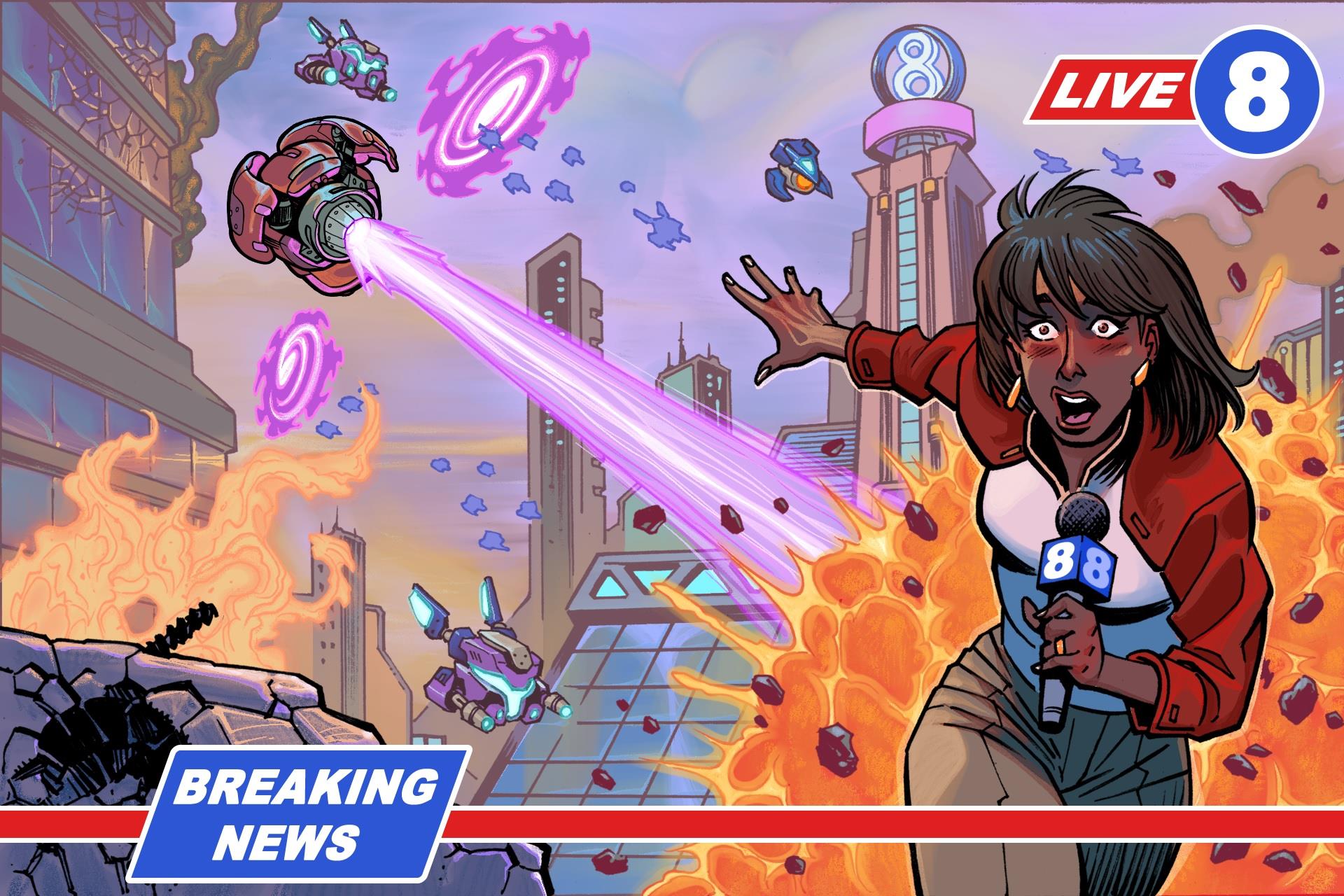 I have nothing but praise for SWARM, but I do want to be clear that this is an arcade game through and through. You can almost feel the quarters leaving your pocket when you die and click the Retry button. World building is minimal, and nothing about this experience will have you pondering the secrets of the universe once you take your VR rig off your head. This is a game to hop into, spend a few minutes blasting some aliens, and hop back out of. Play more, get better, climb the leaderboards.

But SWARM isn’t attempting to do anything except deliver an adrenaline rush and a few laughs. This is a game that knows exactly what it wants to do, and it delivers that experience extremely well. If every game had as tight a grip on its own identity as SWARM does, well, there would be a lot more 9.5 scores swinging around the internet.

SWARM performs some technological voodoo, allowing players to swoop, twist, and turn through its levels with no trace of VR sickness. An arcade game to its core, SWARM knows exactly what it is, and delivers on that experience with gusto, with smooth action and impressive visuals. An amazing amount of fun can be gained from swinging through the air and shooting evil robots. Highly recommended.