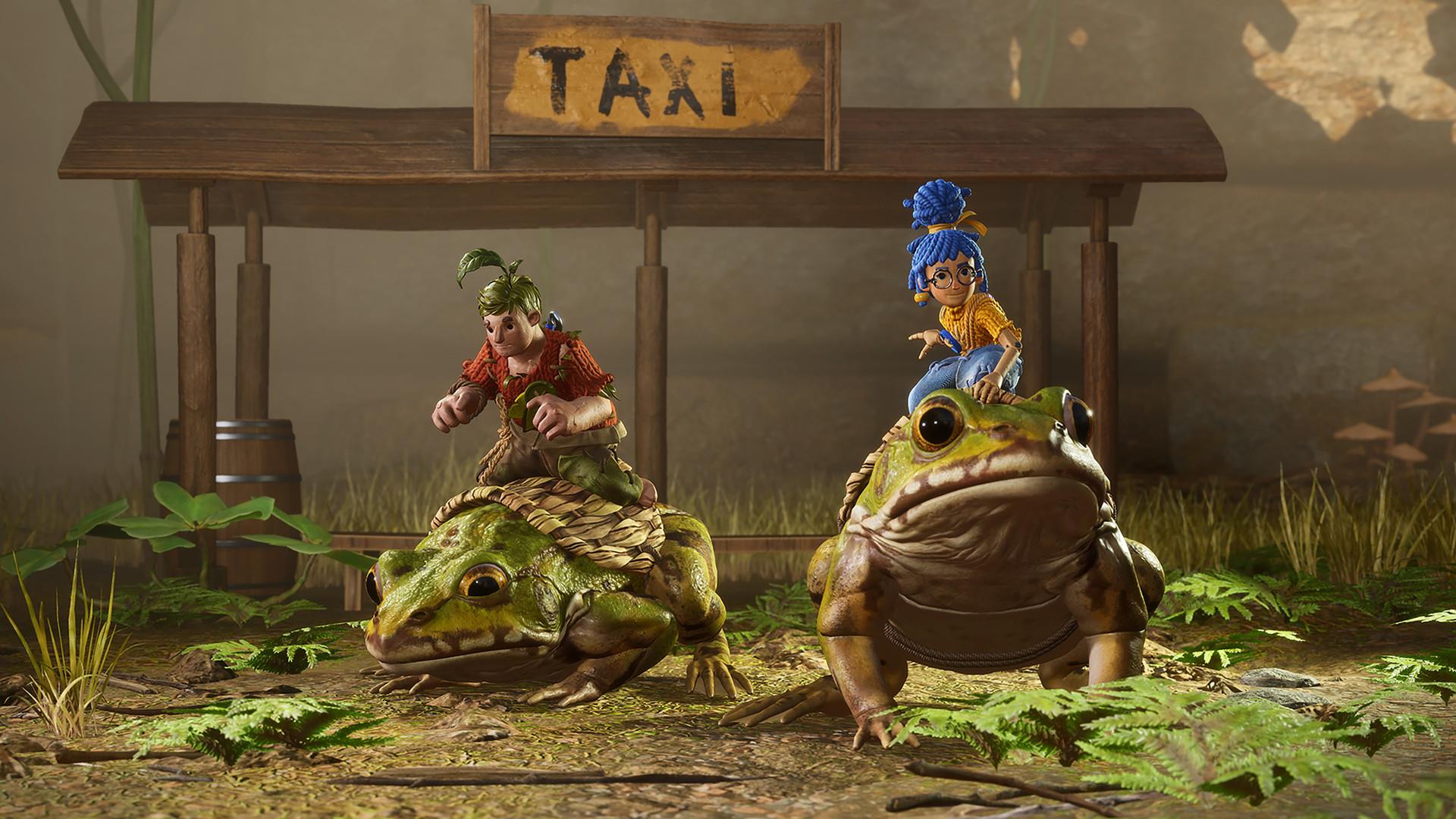 As the Marvin Gaye and Kim Weston song goes, "One can have a dream, baby. Two can make that dream so real." In the video game It Takes Two, May and Cody awake in a dream that is all too real after arguing about their imminent divorce. Their daughter, Rose, flees to the garden shed. Rose makes a childlike wish to the "Book of Love" by Dr. Hakim that her parents can become friends again. She cries on the handmade dolls of her parents who have fallen asleep in the house. The pair wake in horror when they realize they’ve inhabited the bodies of the dolls and are forced to tackle their marriage problems head-on. 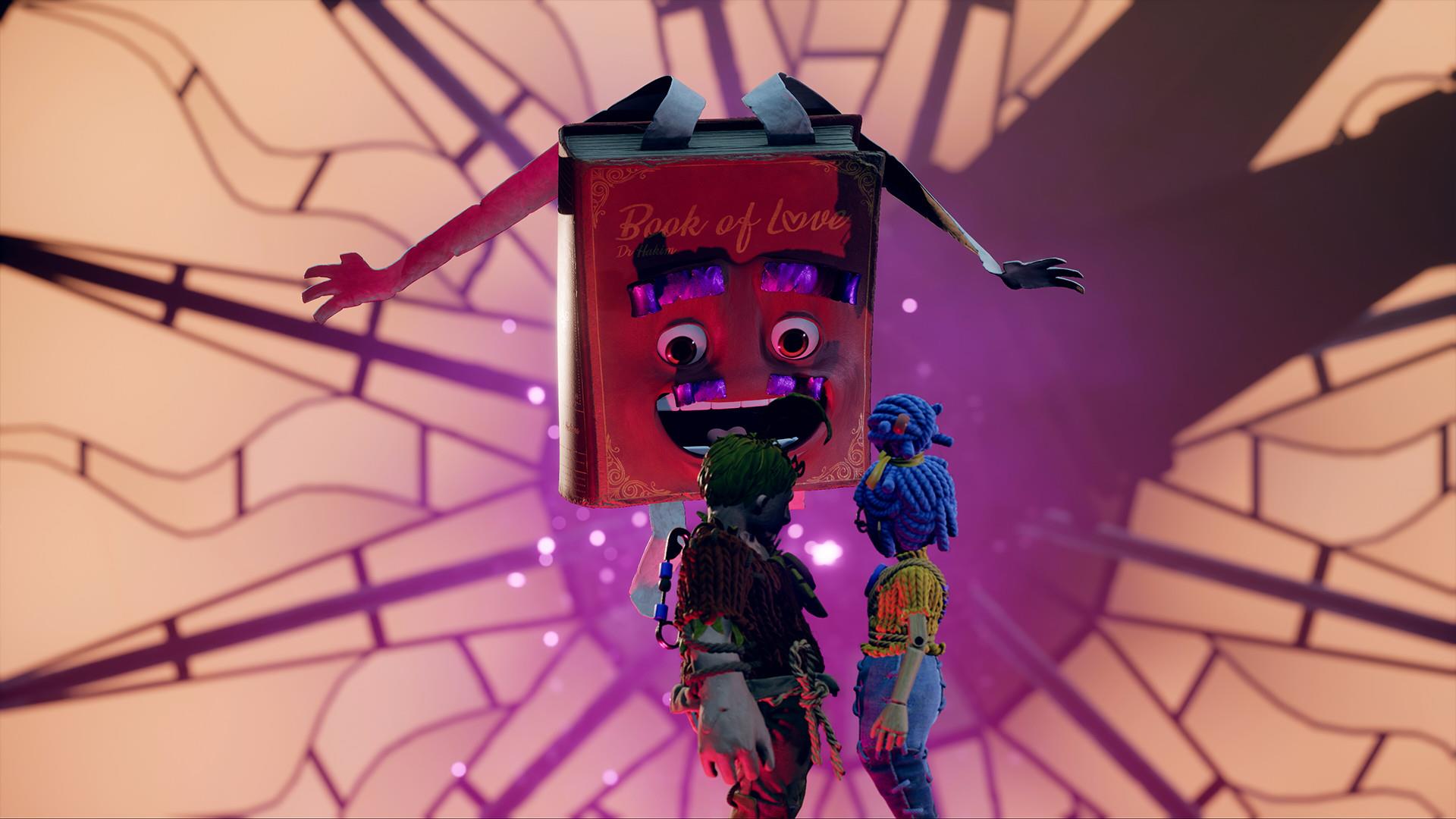 Like Hazelight Studios’ previous games, Brothers: A Tale of Two Sons and A Way Out, It Takes Two is entirely co-op centric. The only major difference being you’re no longer playing as brothers but a married couple. Personally, I’m yet to experience marriage but It Takes Two provides an insightful glimpse into how any long-term relationship can break down. I’m in such a relationship but my partner isn’t really into video games so I played It Takes Two with…my brother. We both greatly admired A Way Out and knew we had to play whatever came next so, despite the initial awkwardness, we assumed the roles of husband and wife.

While still in an awakened horror, May and Cody are greeted by the personification of Dr. Hakim taking the form of a talking book. Dr. Hakim is steadfast in his mission to help May and Cody reconnect. How does a magical talking book help a couple trapped in dolls of themselves and on the brink of divorce reconnect? Through a sprawling, sometimes dangerous, therapeutic adventure, of course. No matter who your co-op partner is, It Takes Two is an absolute blast from start to finish. Every single level brings fresh ideas and mechanics to the fore. Cooperation is intrinsic to everything you do in It Takes Two. Now, let me tell you why this is the best co-op game I’ve ever had the pleasure to play. 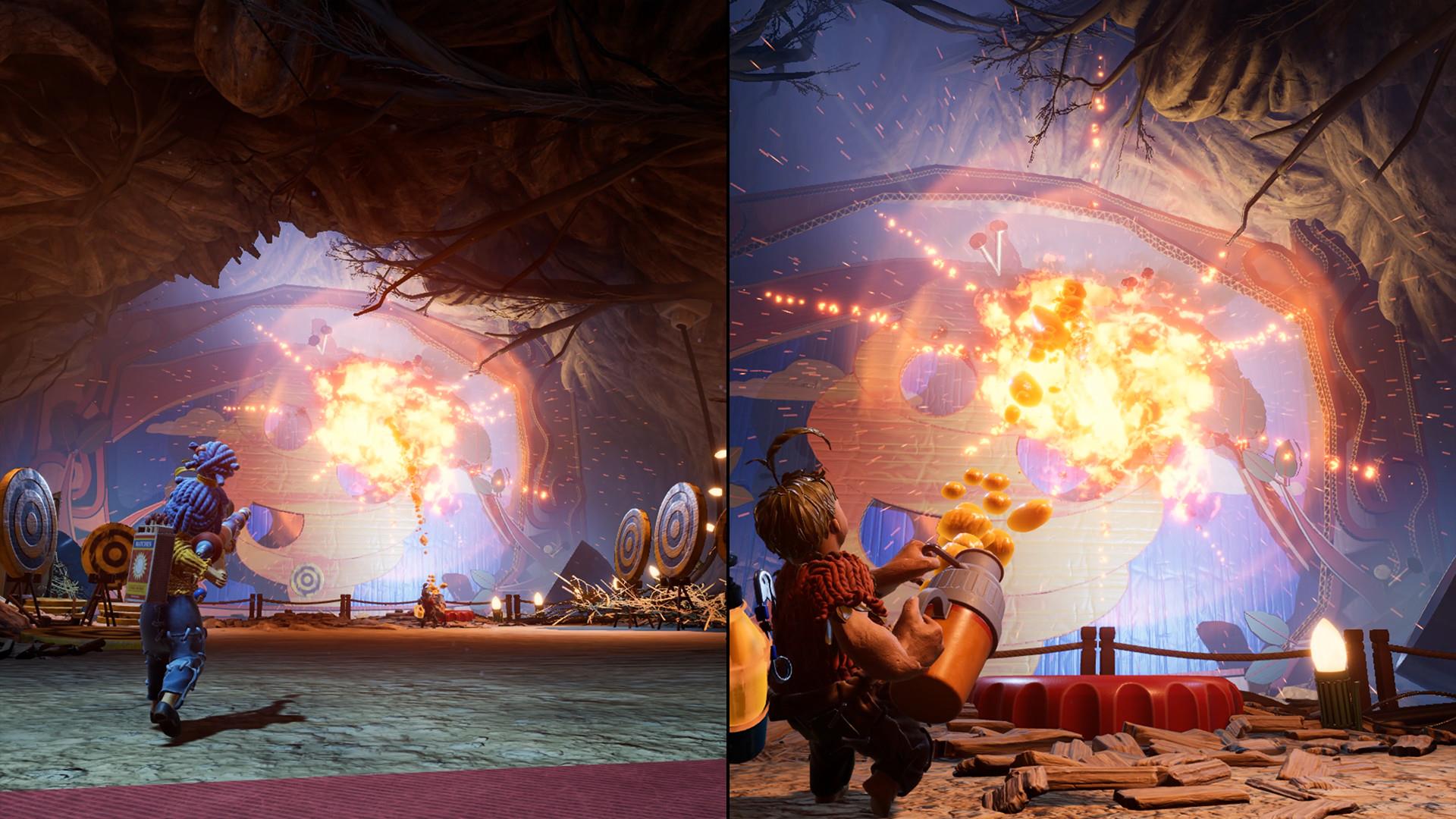 With the unwanted help of Dr. Hakim, you’ll navigate your family home in a situation that’s the opposite of Honey, I Shrunk the Kids. May and Cody must navigate various transfigured parts of the house and garden. Though, some areas have been mutated by magical maladies. Conventional household items like their old broken vacuum cleaner have been brought to life in monstrous fashion. All the while, May and Cody bicker humorously over who’s at fault. In spite of their bickering, cooperation is absolutely essential. Dr. Hakim bestows May and Cody with complimentary abilities. An early game ability allows Cody to throw nails that May can swing on. Another combat ability lets Cody fire honey that May can then shoot to explode.

What It Takes Two does so well, however, is ensuring no new ability, tool, or gameplay element overstays its welcome. In fact, there were times when I wished I had certain abilities for just a little longer. On the whole, though, they’re spaced out perfectly. Just as I mourn the loss of an ability, Dr. Hakim was there to bestow a shiny new one that is just as joyous. One particular level sees a switch from the mainstay third-person to a top-down Diablo-like action-RPG style. In said level, May and Cody become a Mage and Knight being chased by a dragon. This is far from the only example and is demonstrative of a game that’s simply oozing with creative imagination running wild. 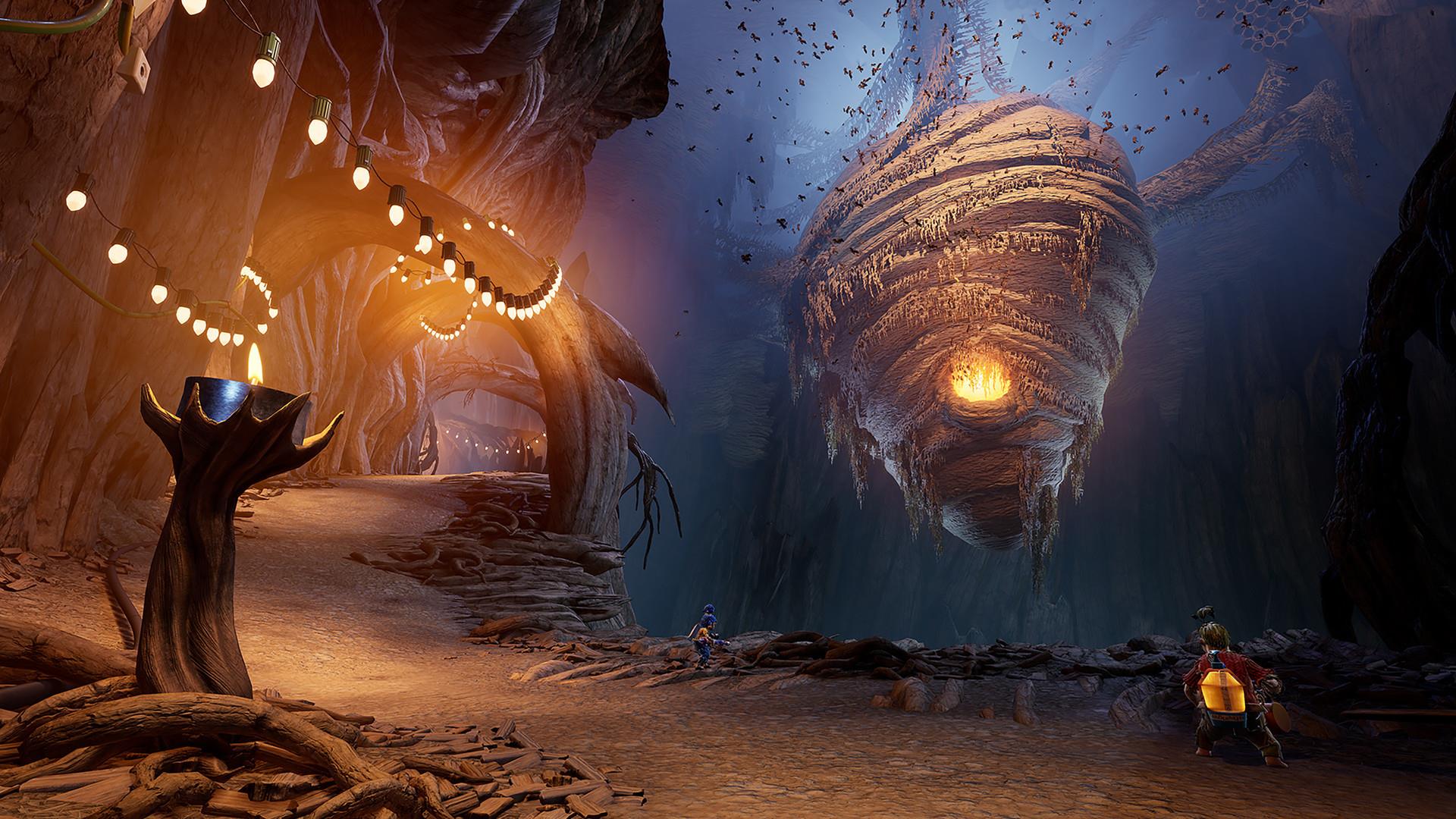 It Takes Two manages to marry Pixar-esque qualities with some mature encounters and narrative. Right off the bat, it’s one of the most aesthetically pleasing games out there. Environments, in particular, are brightly colored and the miniature world is really brought to life. Strong art direction and flawless animations are to thank for making It Takes Two one of the most visually charming and memorable games ever. Sound design is equally on point; memorable sounds range from divine orchestral pieces to glorious rock and roll. Every level is accompanied by a distinct and thematically appropriate soundtrack.

Narratively, It Takes Two is a story of reigniting love between a married couple on the verge of divorce. The narrative is fine to follow, if not anything groundbreaking. There’s doses of black comedy in there with one scene in particular sure to disturb at least one half of your co-op partnership. Gameplay-wise, It Takes Two is a love letter to gaming. At different times, it’s a linear puzzle-platformer, a Super Mario 64-esque platformer, an open world, a racing game, a third-person shooter, an arcade fight sim, an ARPG, and more. For the most part, however, it’s a puzzle platformer. All puzzles are designed with cooperation in mind and communication is imperative if you and your partner are to solve them. Puzzles aren’t too complicated but involve enough difficulty that communication and coordination is necessary. Puzzles escalate appropriately as you progress through the game but almost all showcase an undeniably simple ingenuity. 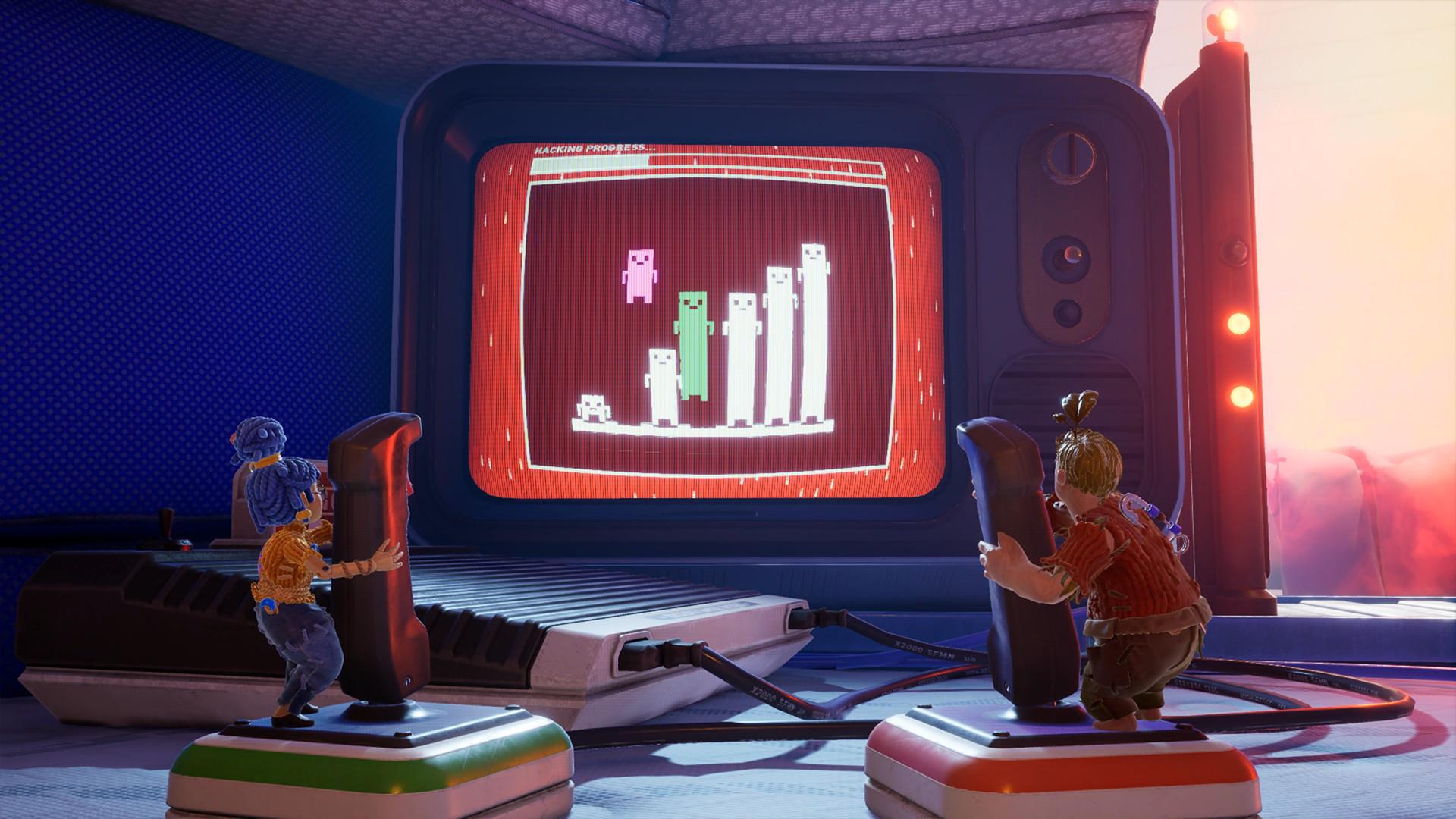 Game Director Josef Fares previously stated his distaste of collectibles in video games and thus there’s none to be found in It Takes Two. Instead, players can find a large assortment of fun and competitive minigames scattered around various levels. Some require you to take detours to find but that in itself promotes exploration. These PvP minigames will have you and your partner playfully taunting each other as you compete. Better yet, discovered minigames are accessible from the chapter select menu, meaning you can always go back for more. On top of that, there’s plenty of enjoyable interactive objects and environments to explore.

I’m reluctant to go into specific examples for sake of not spoiling any of the wonder that one experiences when encountering all of this for the first time. Even I am desperate for a second playthrough to experience it all from the other character’s perspective. Boss battles, in particular, see May and Cody take on different roles that alter how each experiences them. Moreover, the sheer amount of things to do means you’ll likely not find all of it in an initial playthrough. Incidentally, that can last anywhere between 10 to 15 hours. All in all, my 13-hour playtime felt perfectly paced and yet I’m still desperate to go back and play through it all again. Every single level is intrinsically designed to evoke a childlike joy and a true co-op experience where going solo is nigh impossible. The narrative falls flat in some areas but It Takes Two bounces right back with some truly fantastic game design. As far as co-op games go, It Takes Two pushes the boundaries of the co-op genre and is an absolute must-play.

As a video game reviewer, it's very rare I've ever awarded a perfect score. The last two games I awarded with that score were The Witcher 3 and God of War. I say this just to emphasize how It Takes Two really is, in my view, the perfect co-op experience. At least, it's the closest to perfection that I've had the joy to experience to date.