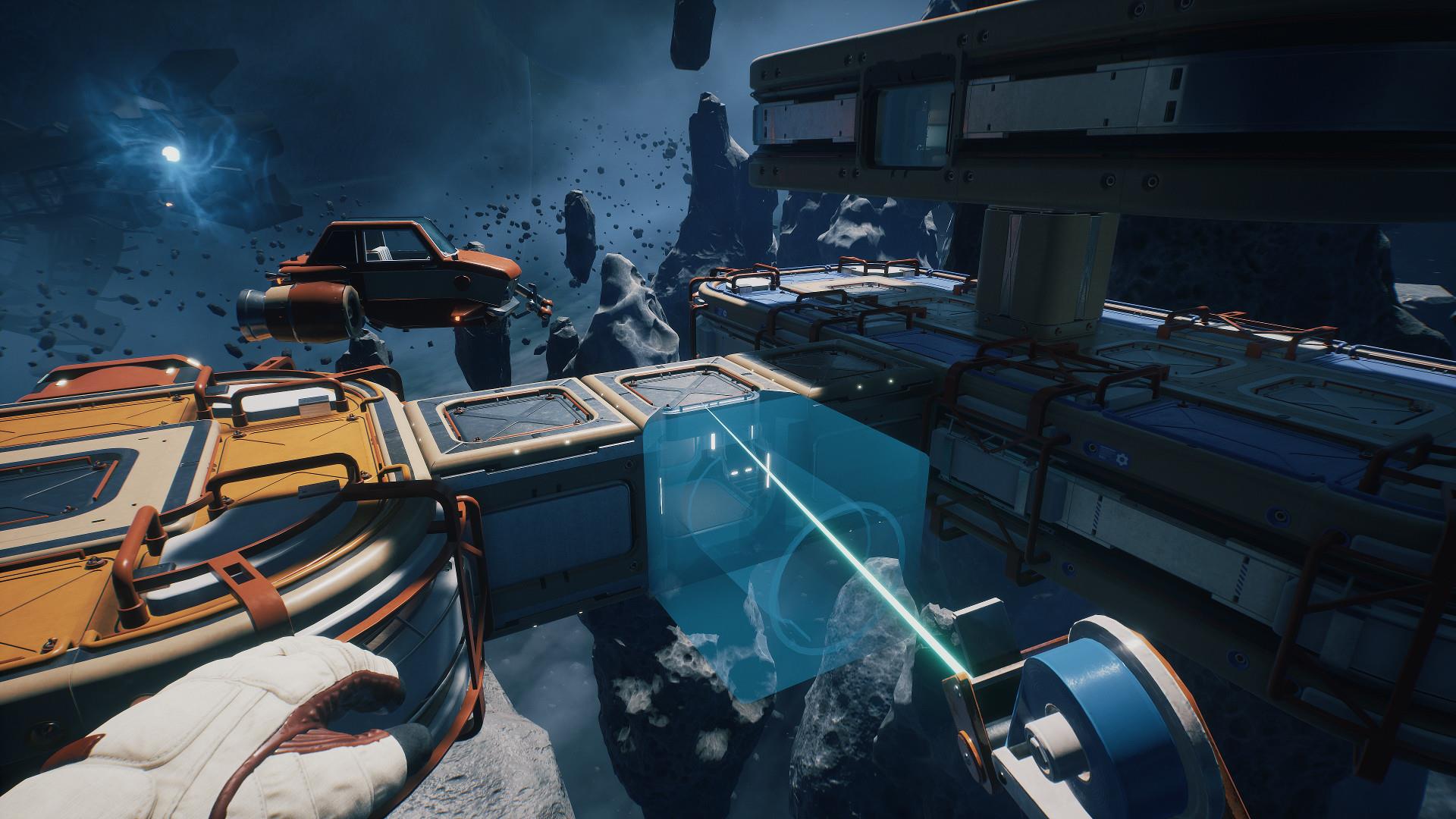 I’m of a very mixed mind on Breathedge, the humorous new survival sim from developer RedRuins Software. There is a ton to enjoy about Breathedge, particularly in its mysterious and sprawling opening levels. But for every great, laugh-out-loud moment, there is a half hour spent on amazingly slow-moving fetch quests, slogging back and forth across vast expanses with little to do but hold the analog stick forward and watch your oxygen reserves drain. And then, halfway through, the game pulls such a rapid left turn into another genre that I was left utterly bewildered.

Things in Breathedge get off to a solid start. Subnautica fans will find themselves in familiar waters during the opening levels of Breathedge, though they will need to get accustomed to performing on a much larger stage. Much like that beloved classic, Breathedge begins with the crashing of an enormous ship, leaving the player (known as “Man”) adrift in space in a small, broken shuttle, with debris from the wreckage strewn across a massive asteroid field. 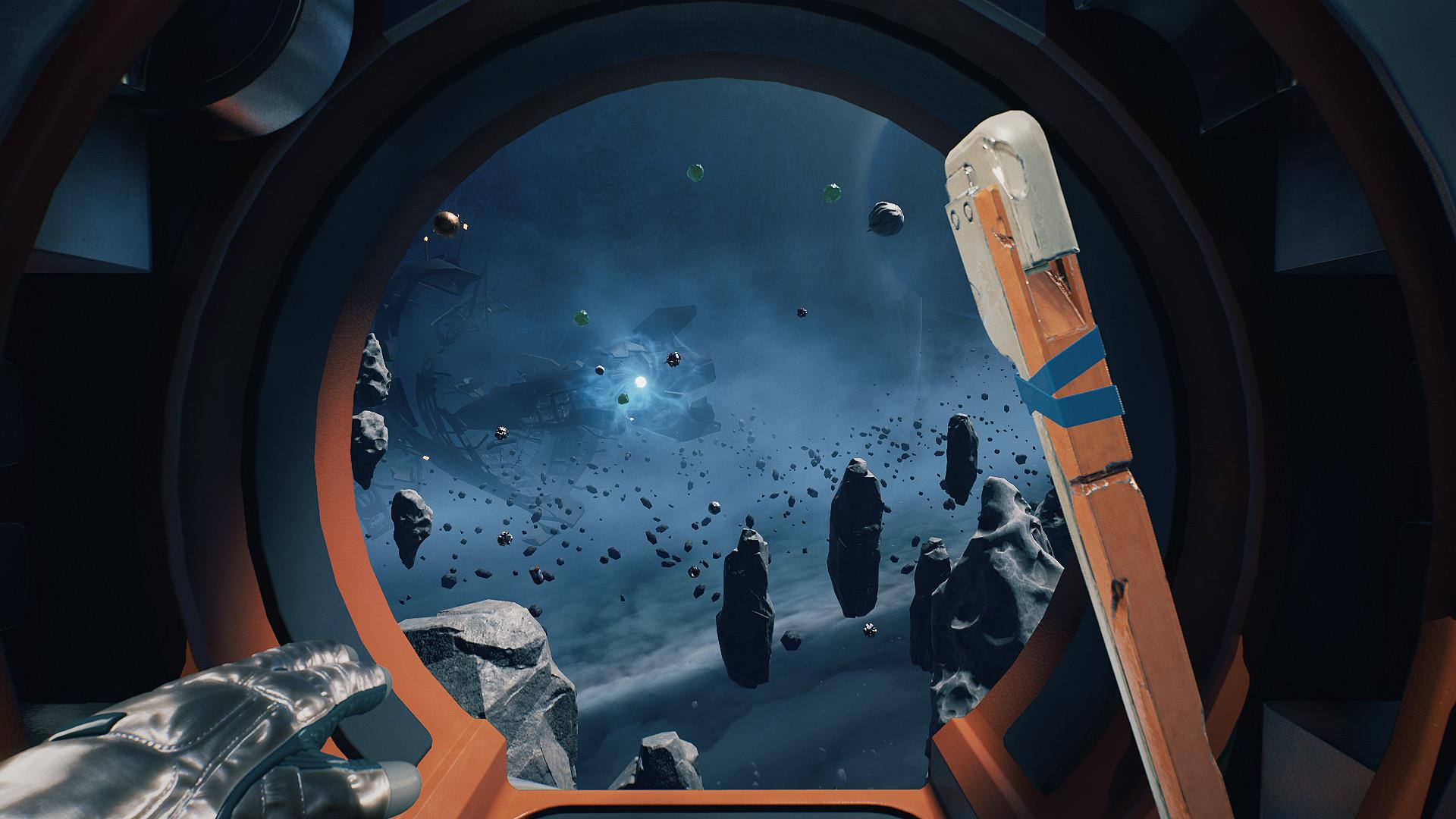 The shuttle is equipped with a construction bench and little else beyond some mementoes from the life of Man’s grandfather, who is currently floating in a coffin out in open space. To survive, Man must leave the shuttle on material-gathering expeditions—first to gather the food and water needed to survive, and later to start investigating what happened to cause the crash, and how he can start constructing the equipment needed to escape his current predicament.

Though Breathedge is laced with amusing (though adolescent) humor, these excursions can be harrowing. For much of the first level, which took me about four hours to complete, Man only has 75 seconds of oxygen with which to explore his environment. This translates to some hit-and-run exploration trips, with the player pushing out to the very edge of the invisible mechanic keeping them tethered to their shuttle, then stressing mightily on the way back while Man floats languidly toward the shuttle as his oxygen reserve ticks down. 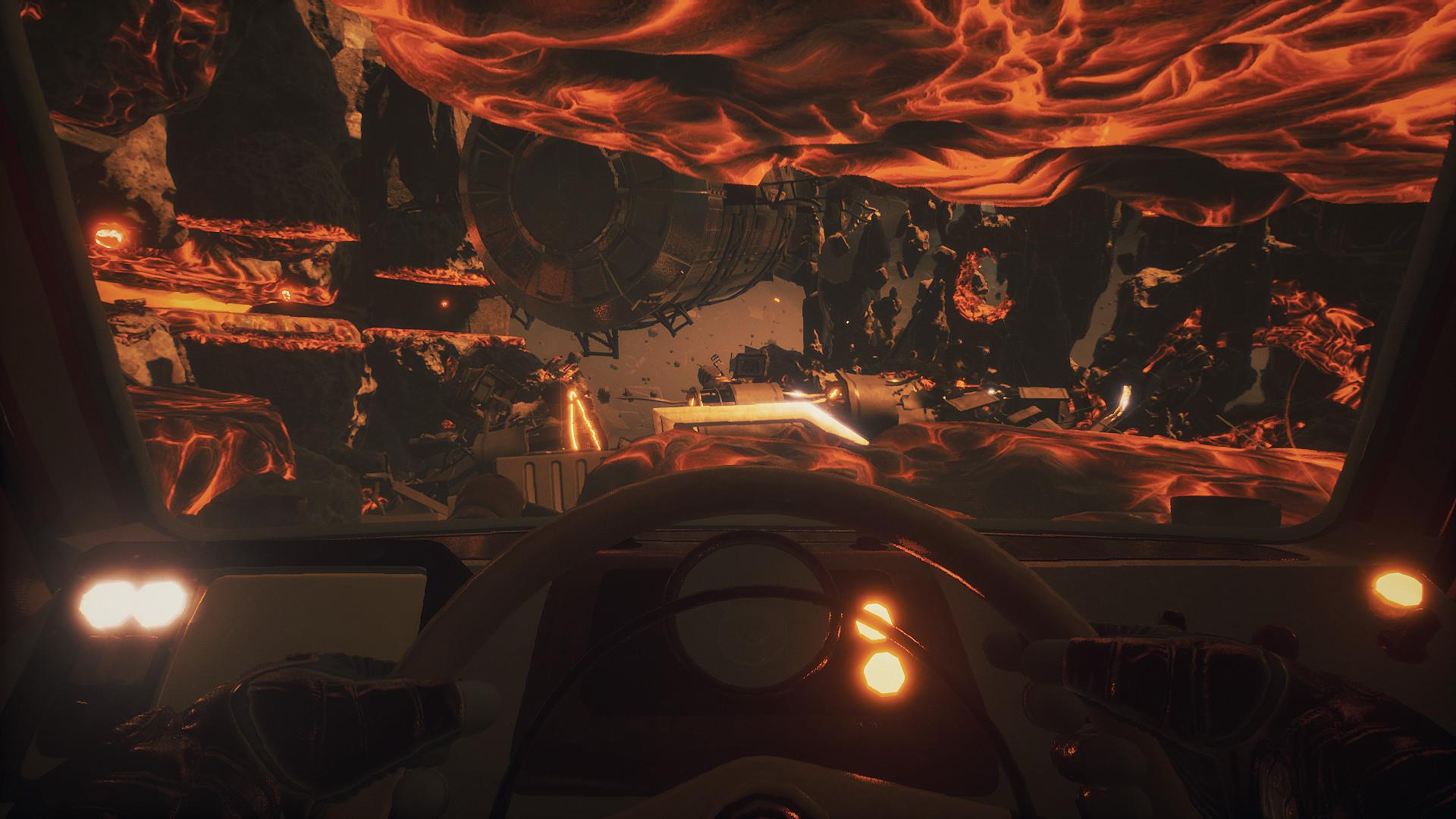 The area the player needs to explore in all of Breathedge’s open levels is enormous, and at first the task at hand seems damn near impossible. You can see where you need to go, painfully obvious across a huge open expanse, but with the limits on Man’s range dictated by his air consumption, the goals might as well be in a different galaxy. With no relevant sense of up or down, it is incredibly easy to get turned around, which can lead to some very panicky moments.

But bit by bit, Man starts gathering the stuff he needs to push further into the wreckage. Materials and blueprints are slowly uncovered, and eventually Man is building better spacesuits and portable oxygen stations to leave floating in the empty vastness. Even then, there is a careful calculus that must be adhered to, as the temptation to explore just a few seconds beyond your range is constant. Staying even a couple of moments longer than intended to gather a few more pieces of glass or lead can be the difference between life and death—and death leads to a full restart, or at least a reload to your last save. 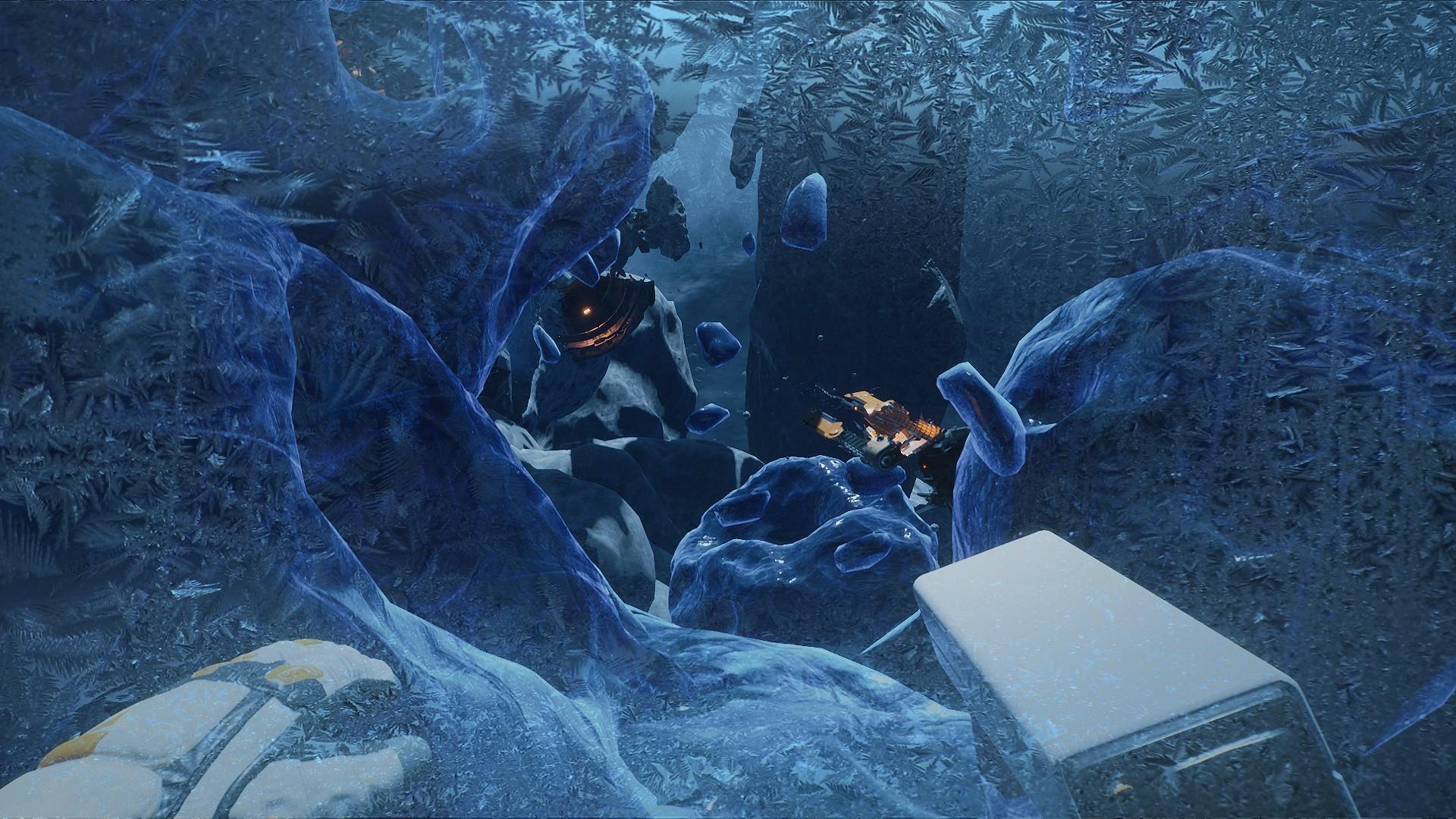 And the entire time you are out in the vacuum trying to survive, Breathedge is messing with you. I must admit that the game pulls off a few laugh-out-loud surprises, but much of the humor is delivered in a way that seemed more calculated to irritate than amuse. Exploration leads the player to regularly find the grossly funny remains of the various other people on the ship, while your onboard computer chatters merrily away, spitting out one-liners and possible instructions in a voice that speaks so fast that you often can’t understand what it is saying. 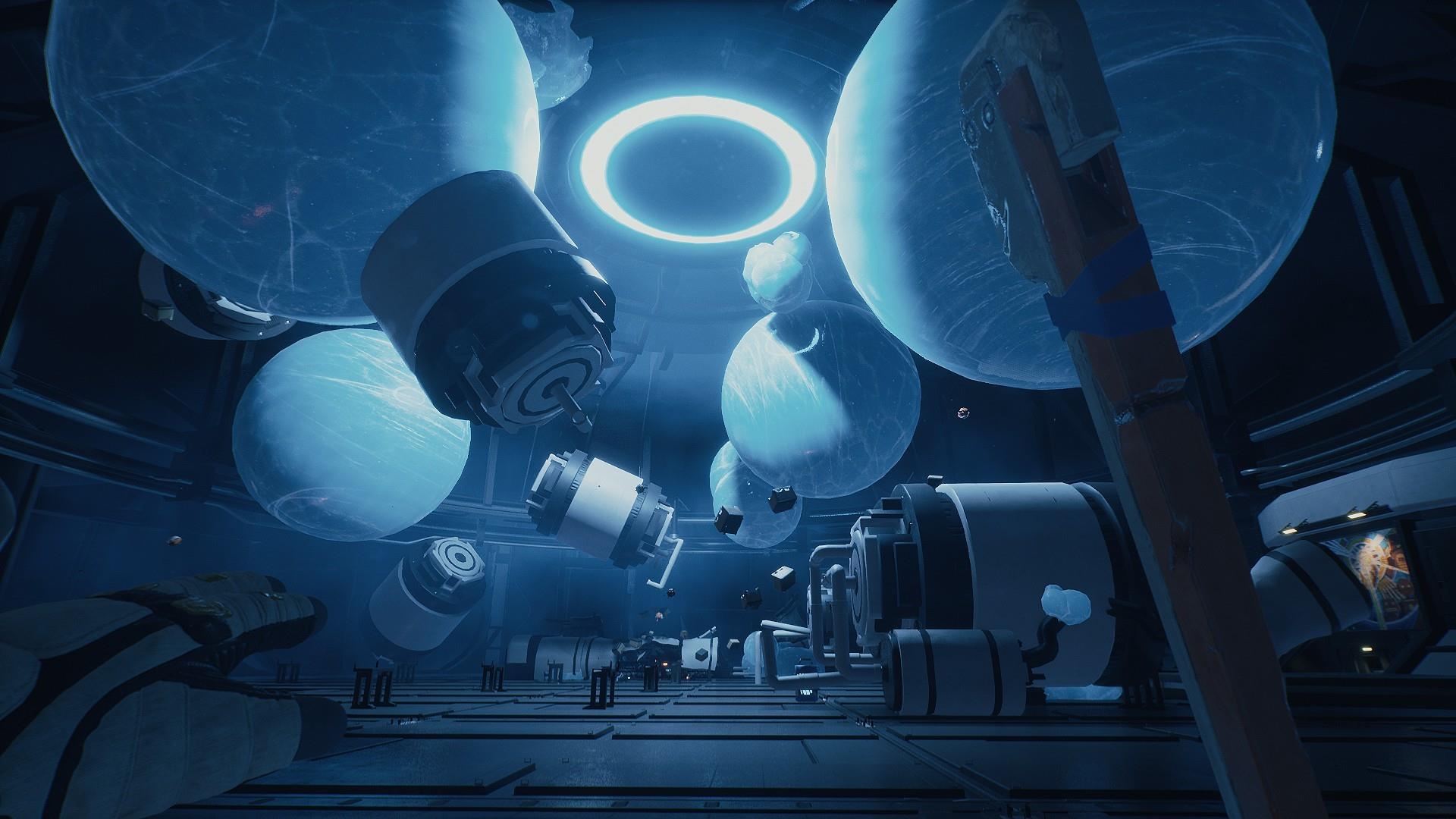 It is just that sort of flippant disregard for the player's time that had me souring on Breathedge long before it makes its wild pivot. In the first level, player movement is so painfully slow that the majority of your time is spent on snail-paced expeditions for materials, which are often tucked away in the farthest corners of the map, needlessly distant from your shuttle. This necessitates careful planning, with each trip taking up valuable materials and far too much time. Even when you get the ability to move more quickly, Breathedge remains a curious mix of satisfaction at a difficult job completed and frustration at the slog you endured to do so.

Subsequent levels are similar. The player gains the abilities to move faster and survive longer, but the world expands accordingly, which keeps the slog alive and well. That return trip to your construction station always feels like an endless trek with very little reward. Every moment of satisfying building seems to be matched by a moment of frustration, often in the guise of “humor.” And yet, there is still a certain charm to Breathedge, right up until it turns into a different game. 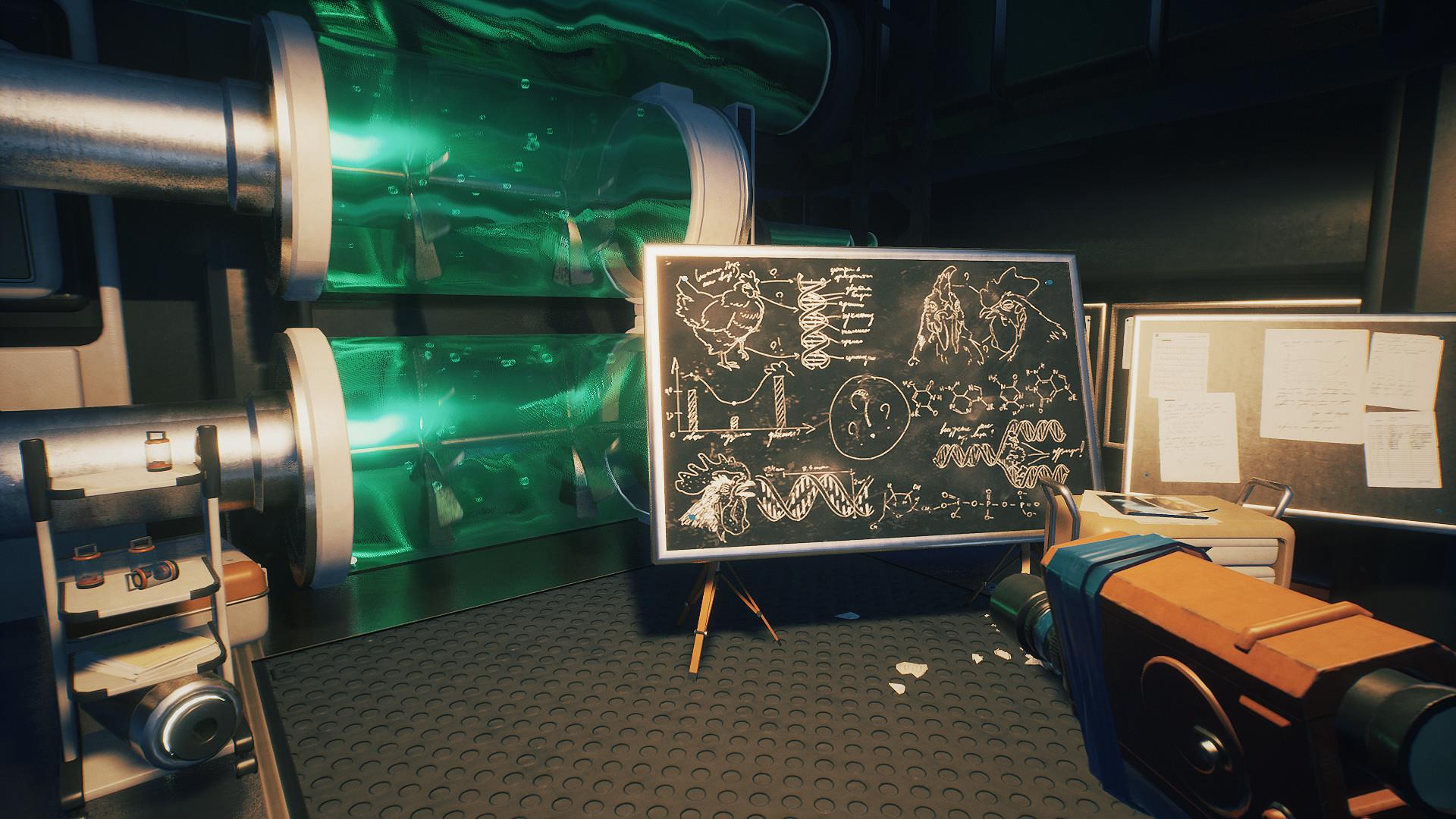 Imagine you are playing an old-school Final Fantasy game, with all of the Phoenix Downs and treasure chests and hit points that one would expect. And then, when you have progressed far enough to put Disc 3 into the PlayStation, Final Fantasy turns into a baseball game, with a few Final Fantasy mechanics still kinda lingering around the edges. Maybe you can use potions to increase your pitch speed, or megalixers to get an extra strike.

That’s the sort of weird turn that Breathedge takes in its later chapters. What was a moderately satisfying (if sometimes wearying and frustrating) survival sim becomes a walking simulator/adventure game, with the player running up and down corridors while the game attempts to wrap up its story. It still looks like Breathedge, and sounds like Breathedge, but most of the mechanics from what you think the game is are tossed right out the porthole. 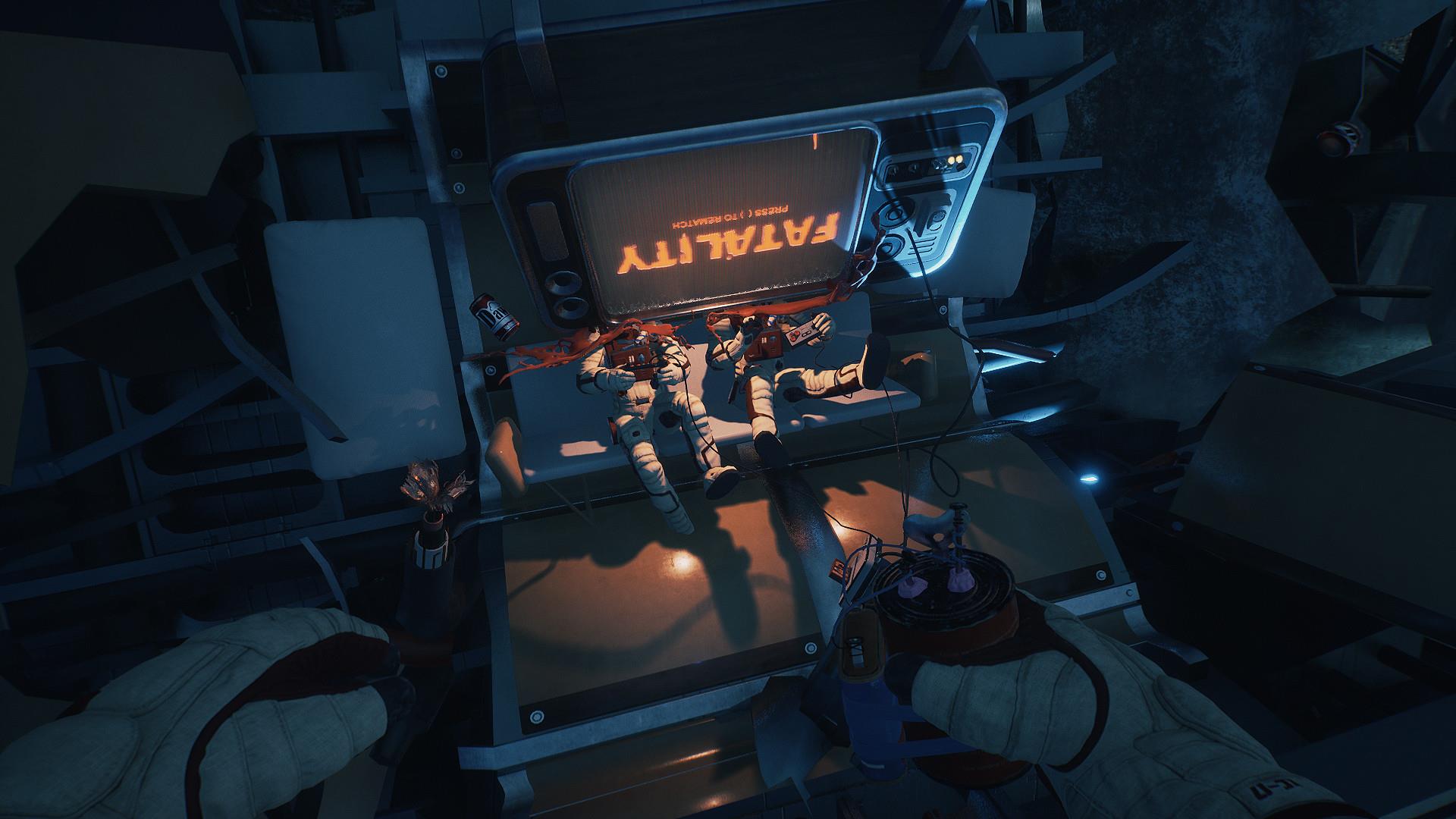 That mid-game pivot must have felt like a bit of a bait and switch to Breathedge’s early access supporters, as everything that was released leading up to the game’s launch was of the “float in space and build stuff” variety. Those excited to see how the story played out when the game launched must have been at least a little put off by the fact that they went from an open-space survival game to a corridor-based walking simulator in the blink of an eye.

A bit of the old material gathering and slogging is still in place, but for the most part, the last third of Breathedge feels like it was developed by a different company. This shift may well have been part of the original plan for Breathedge, and it isn’t exactly bad, just unexpected and weird. It does feel a bit like the folks making the game ran out of the willpower needed to compete the game using the same mechanics they started it with, and just wanted to be done already.

Breathedge does have some great moments, and achieving the game’s goals is fairly satisfying—if only for the pat on the back you give yourself for your own perseverance. At times, Breathedge can deliver a nice sense of awe at the wide-open spaces it employs, and the visuals are sharp and clear. It controls well, and there is a certain mood about the thing that interestingly hovers between silly toilet jokes and hard sci-fi. I can see many gamers enjoying the game for its mix of tension, tranquility and weird chicken-based humor. But at a certain age, I lost my tolerance for things that I feel are wasting my time. And Breathedge clicked a few too many unrewarding minutes off of my life for me to give it my full recommendation.

Breathedge offers some decent exploration and survival gameplay, tucked among very slow trips to gather materials that sometimes feel like they are wasting the player's time. A hit-and-miss sense of humor can sometimes amuse, while other times causing something close to fury. A mid-game pivot seems to drive the game off track—changing the mechanics in a way that feels jarring. Enjoyable for stretches, Breathedge can't help but shoot itself in the foot occasionally, in ways that are more frustrating than fun.