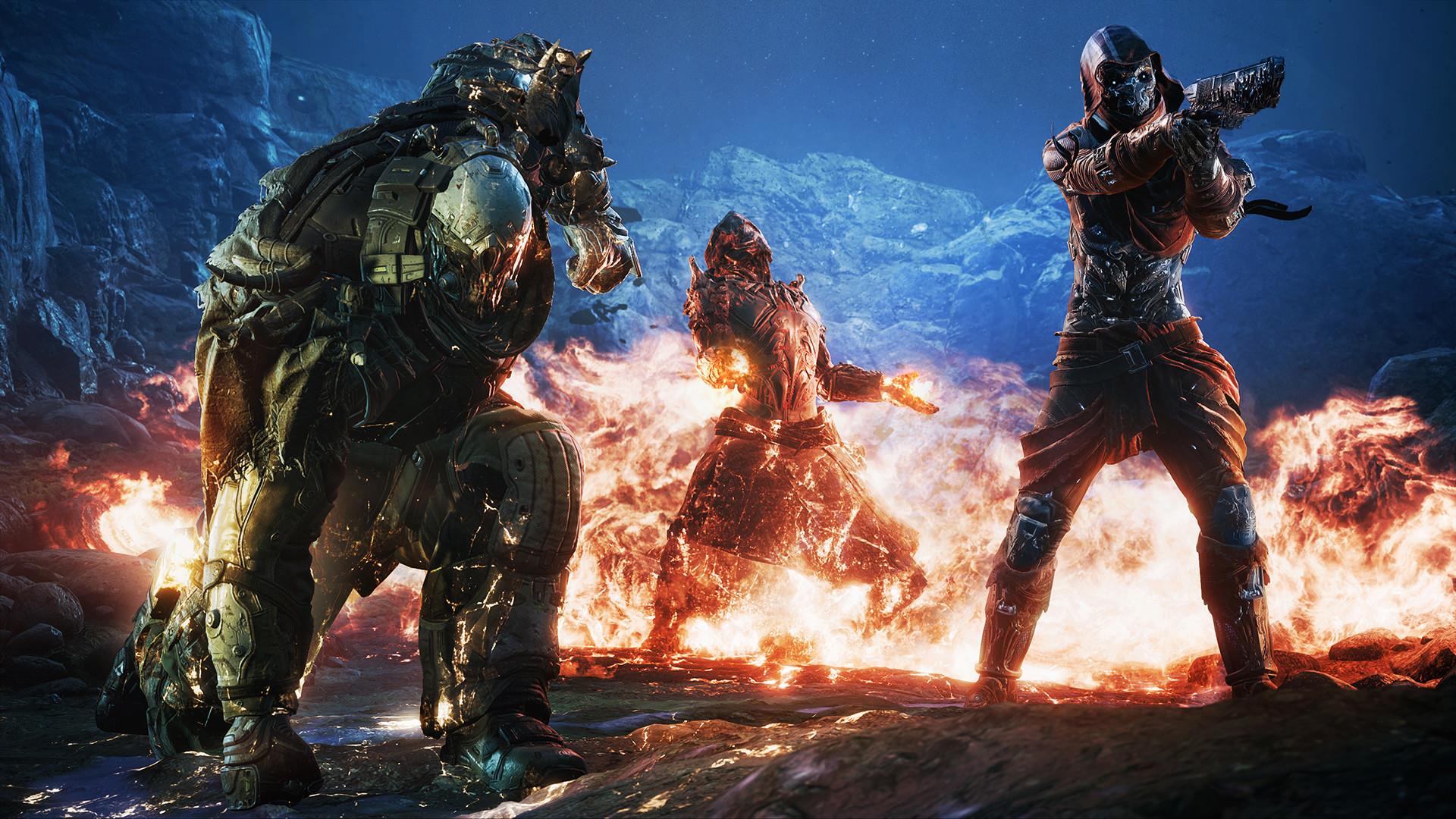 It has taken me longer than scheduled to finish my review of Outriders. Partly, that’s due to personal reasons but there’s also another reason: I have frequently experienced server issues and I even fell victim to the infamous inventory-wipe bug. Due to this, I abandoned my late game Pyromancer and started a new character. I completed most of the game on the affected account but I rushed through the main campaign on my new character to get to the ending. Thankfully, developers People Can Fly successfully patched this bug so it won’t happen henceforth, and also announced plans to restore lost items. I’m reluctant to let these issues skew my review too much, but at the time of typing this up, the login issues persist.

I spent a lot of time playing the Outriders demo for the purpose of my demo impressions. In the final line of my impressions article, I stated, “There’s enough good stuff in the demo to make me want to play the full game, but I’m hoping there’s some improvements before then.” Given the short time frame from demo to release, I was doubtful much could change. To my surprise, People Can Fly managed to fix a number of the technical issues pointed out in the demo. Issues such as sickness-inducing motion blur, poor aim assist, and camera shake are all remedied in the full game. As aforementioned, the only lingering issue from the demo is the persistent login and disconnect issues. 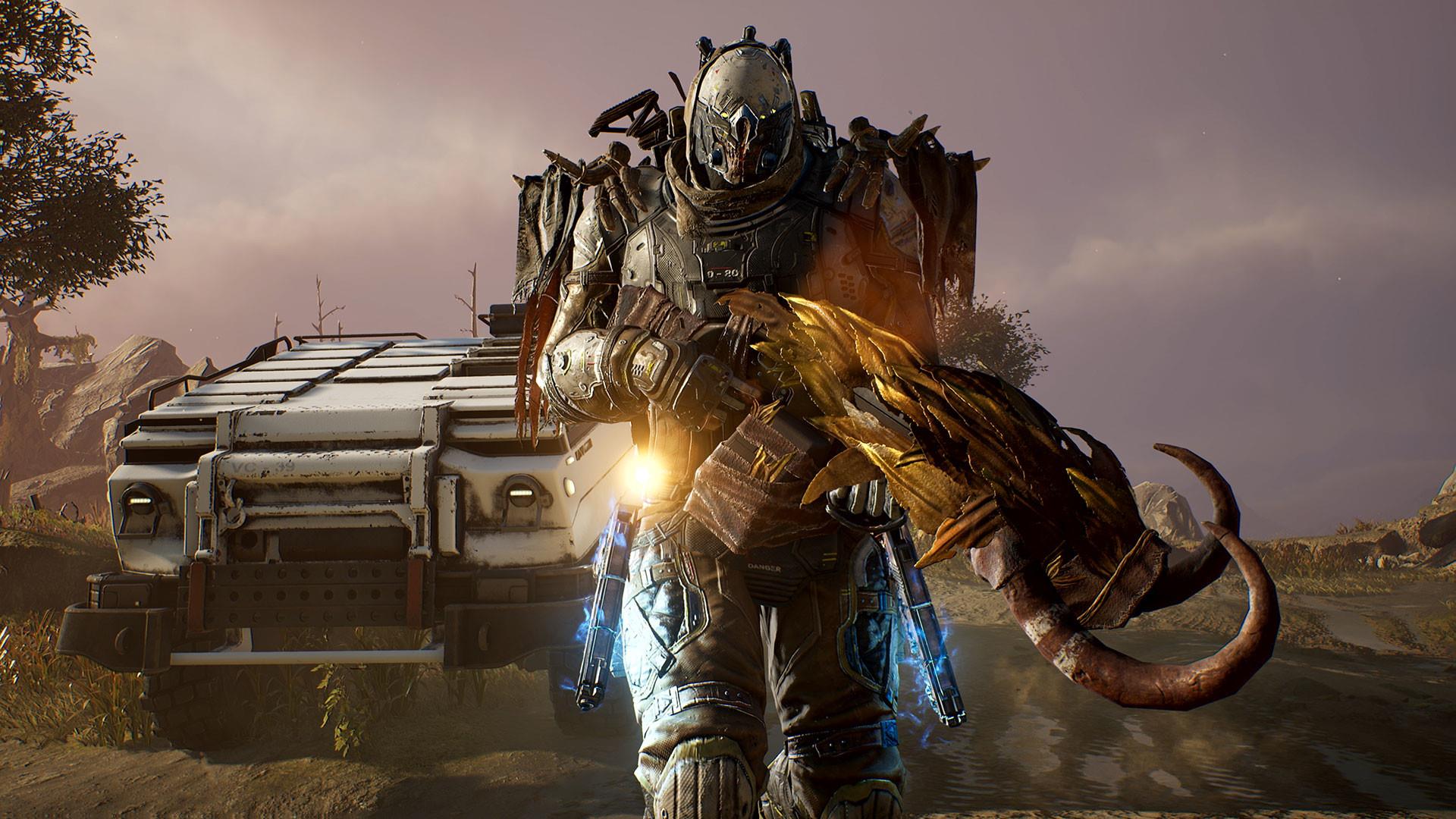 In the first few days after release, I was very patient with the connectivity issues. It’s very rare any big online-only game doesn’t experience some modicum of such issues upon release. Writing this, it’s been about three weeks since launch and the issues, albeit not as prevalent, persist. It really is a shame, too, as when you can play Outriders with no such issues, it really is great fun. I’ve spent enough words on the connectivity issues so let me draw attention to why Outriders is worth your time and money. Right off the bat, to describe most succinctly what Outriders is, imagine a mashup of Mass Effect, Destiny, and The Division. That is, a mashup of Mass Effect’s sci-fi story and dialogue, Destiny’s awe-inspiring abilities, and The Division’s gunplay.

Out of those three, Outriders feels like it belongs to the same Xbox 360 shooter era as Mass Effect. That’s not a dig, however. On PS5, it runs well at 4K resolution and 60 frames per second. It certainly doesn’t look or run like an Xbox 360 era shooter, but it really does, for better or worse, play like one. As someone who really got serious about gaming during that era, Outriders is a welcome throwback. To others, particularly a younger audience, they might not give Outriders as much leeway. At times, Outriders is visually striking and runs at a fluid 60 fps but it undeniably falls short of the technical quality of contemporary looter-shooters, à la Destiny or The Division. 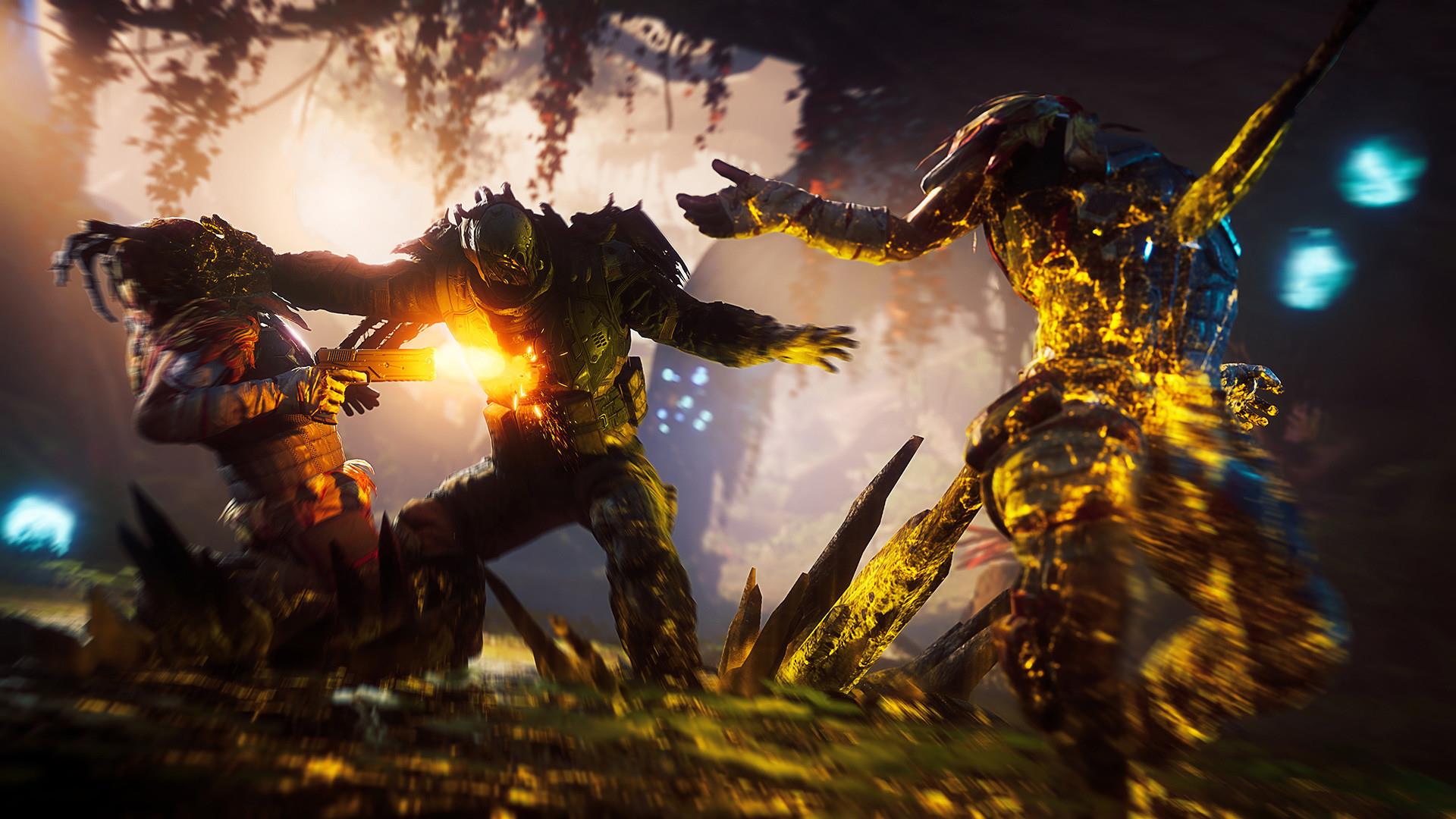 It’s also similar to Mass Effect in story and dialogue. Though, I do have a confession to make: I’ve not played the original Mass Effect Trilogy of games. Everything I know about Mass Effect is from my time playing Andromeda, reviews, word-of-mouth, and Gaming Nexus’s Randy Kalista replaying Mass Effect 14 years later. Having played Outriders, though, I can express doubt that its story will be held in as high regard as Mass Effect’s. It starts off on a promising note but it ultimately falls flat. It’s serviceable, sure, but forgettable. Issues such as poor voice acting and trouble with setting the appropriate tone only exacerbate the issue. Dialogue options are on offer to allow players to dig deeper into Enoch’s lore but this unfortunately doesn’t give you any meaningful choices.

Outriders' saving grace is, hands down, the high-octane gameplay. Similar to the Gears of War games that People Can Fly previously worked on, there’s plenty of cover in combat arenas. But unlike cover shooters that came before, it’s actually discouraged to make use of it. In Outriders, healing isn’t something done behind the safety of cover. Instead, healing is achieved through aggressive play and tactical use of an Outrider’s devastating abilities. Each character class heals in slightly different ways but one thing is consistent across all classes: an Outrider must be proactive and aggressive in order to deal. Passivity leads to certain death. 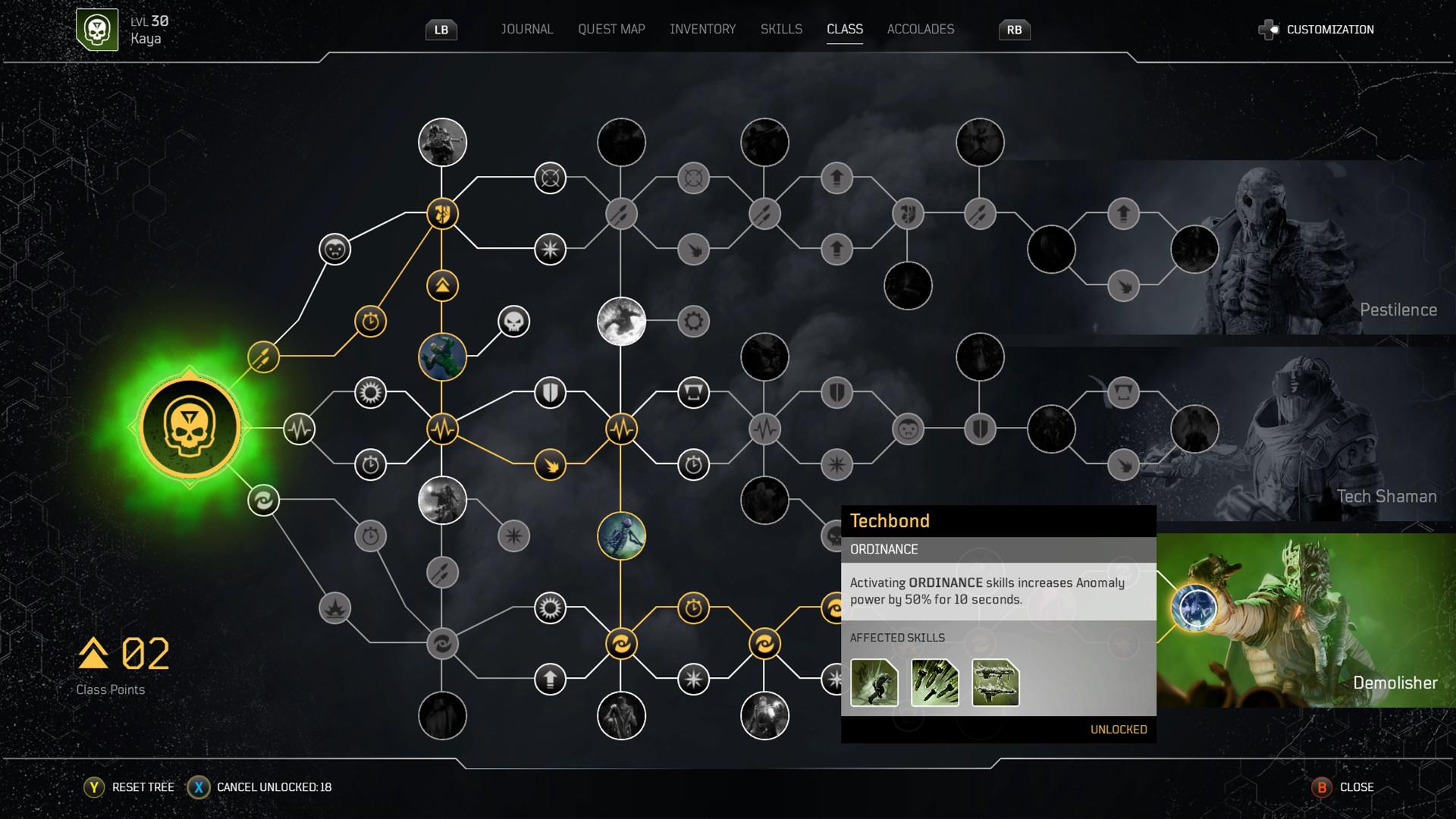 All four character classes in Outriders are largely well-rounded. The Pyromancer is a medium-range class that can conjure fire. They recover health whenever enemies marked by your skills are killed. The Devastator is a close-range tank class that manipulates the earth beneath their feet. They recover health from slain enemies that stood too close. The Trickster is another close-range class but with a focus on damage-per-second by bending time and space. The Trickster has less health than the other classes and heals by killing enemies in close proximity. It’s also the only class with a shield. Lastly, the Technomancer is a long-range support class using deadly gadgets. They heal through a percentage of damage they deal.

Outriders’ gameplay provides so much high-octane fun that it really does save an otherwise dull affair. Each character class is imbued with badass abilities and subclasses that can be tweaked to your preference. Want to be a pure DPS pyromancer? You can skill towards that. If you prefer to be tankier, you can skill towards that instead. No matter your preferred playstyle, Outriders can cater to it. Each class possesses eight unique abilities with three being equippable at any given time. Abilities are drip-fed to the Outrider as they level up. Abilities can also be swapped out on the fly so you’re never locked into any particular arrangement. 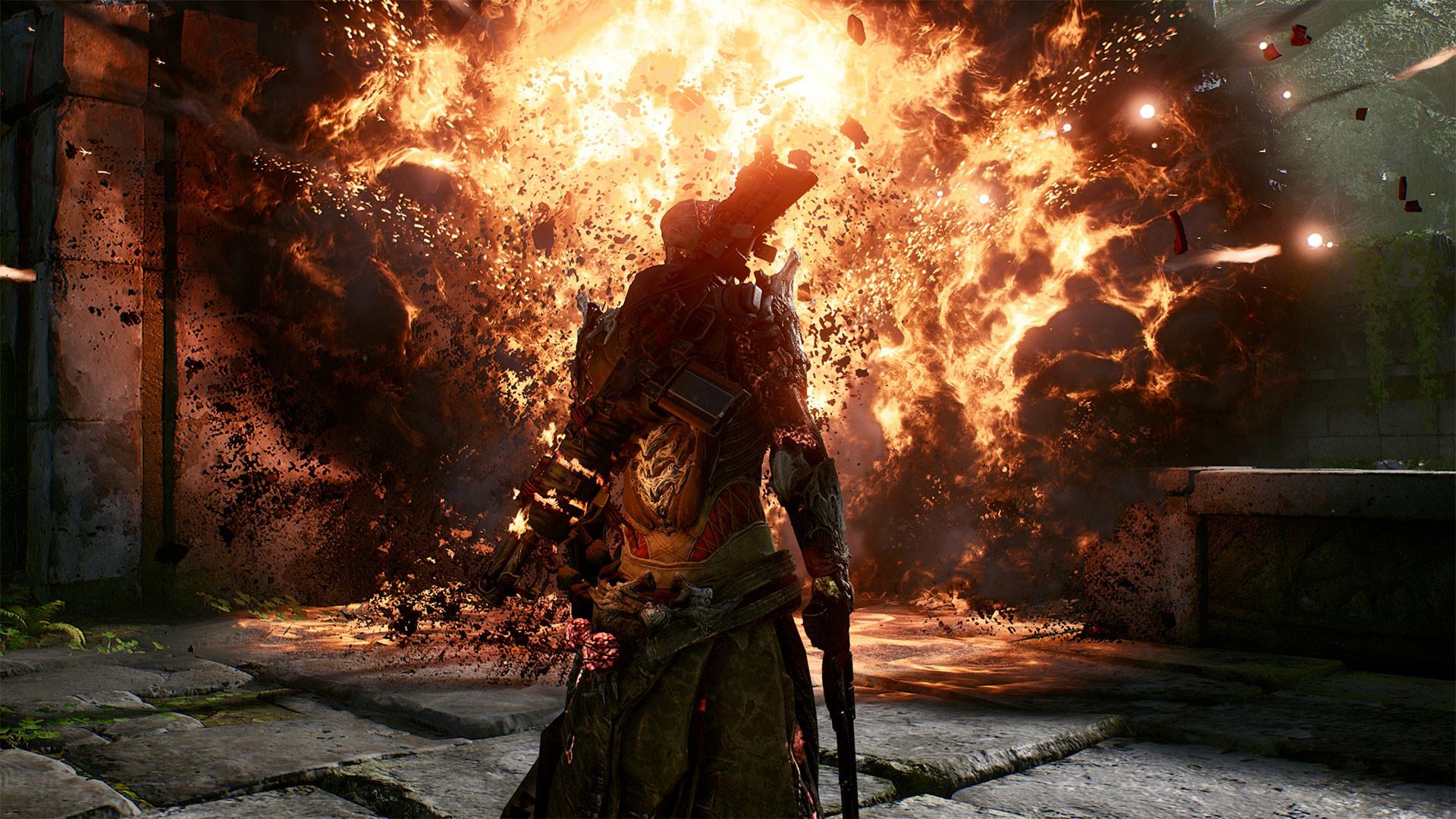 Before it fell victim to the inventory-wipe bug, my first character was a Pyromancer. The Pyromancer is able to incinerate enemies and chain together abilities thanks to short cooldowns. On my second playthrough, I opted for the Trickster, the assassin class. While I preferred all eight abilities of the Pyromancer more, I cannot deny how enjoyable it is as a Trickster to teleport behind enemies, unleash a time-slowing bubble, and then slice all enemies trapped within with the Trickster’s temporal blade. Playing solo, you are limited to one set of abilities. If you play co-op, however, you can synergize abilities with two other players and unleash all kinds of destructive power.

While the core gameplay is indeed the biggest saving grace of Outriders, that’s not to say other silver linings can’t be found. In particular, the modding system is one of the best I’ve ever seen in a video game. All Epic and Legendary items in the game possess two mod slots. One slot can be interchanged, but once you do, the other locks, so choose carefully. You can dismantle gear you don’t want in order to obtain its mods to put into other gear. There’s three tiers of mods, going up to tier three which are the most powerful mods in the game. Mods really do have a huge influence on your playstyle so it’s prudent to pay attention to the mods you equip. Some mods are ability-specific so you wouldn’t want to use them if you’re not using the corresponding ability. This allows for a lot of experimentation. I did, in fact, spend a lot of my time doing just that. 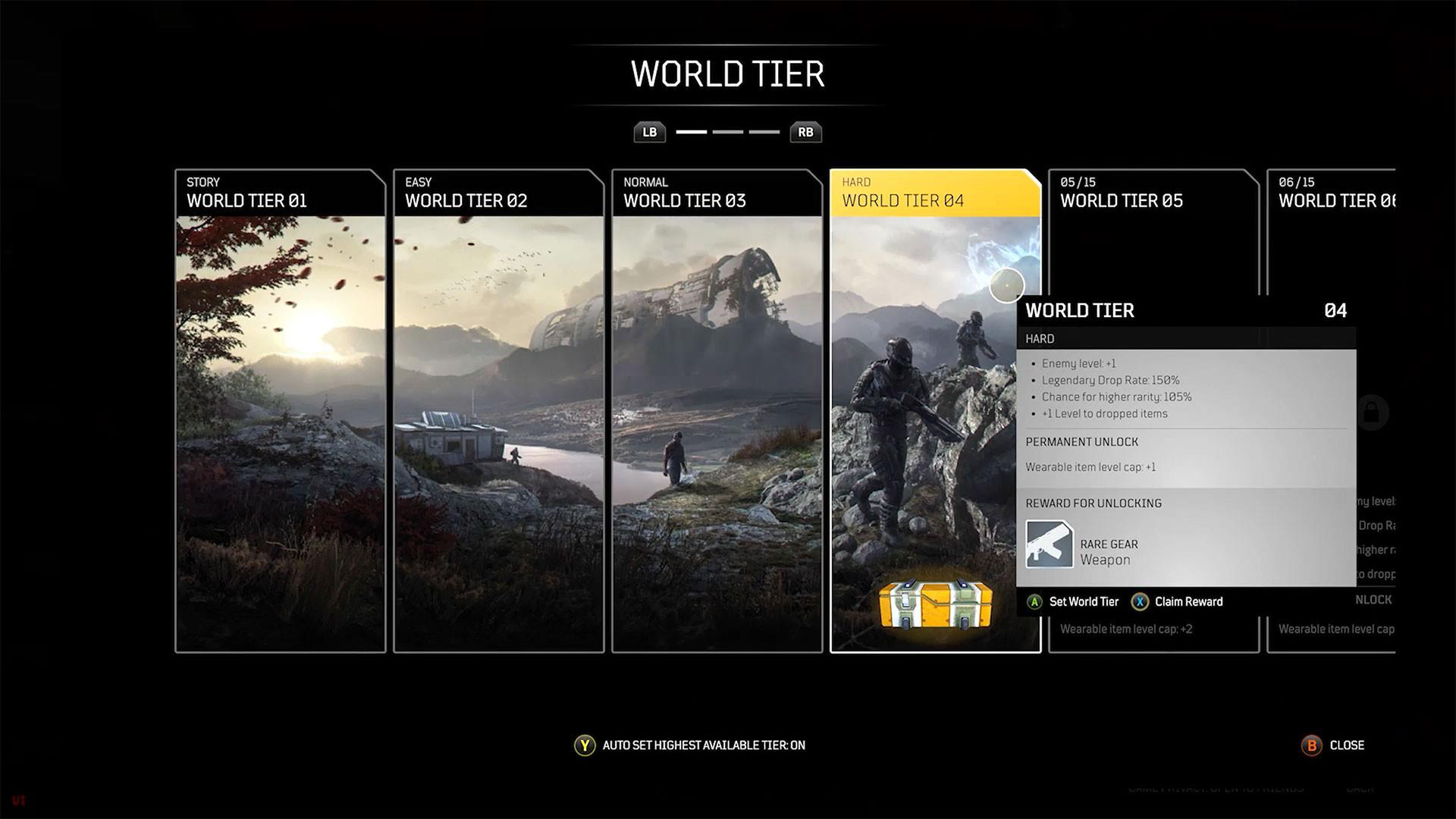 As for the loot itself, inherently one of the most important aspects of a looter shooter, there’s plenty of varied loot to be had. Fans of looter-shooters will recognize the addictive game loop of picking up missions, defeating waves of enemies, and praying that the RNG gods bestow you with high-quality gear rolled with the attributes you want. Outriders doesn’t do anything new in this regard but it doesn’t fall short either. The world tier system provides an interesting premise, however. World tiers affect how difficult the enemies are with higher world tiers providing ever-increasing difficulty but a higher chance to get better gear from chests and enemy drops.

All in all, I’m confident that fans of looter-shooters will enjoy Outriders. The gameplay loop is enticing and the combat makes you feel like a force to be reckoned with. Outriders ditches the crutch of using cover and promotes aggressive, high-octane combat. Boss battles provide a genuine challenge but there’s enough variety among lesser enemies to keep you on your toes. If you go into Outriders with expectations of a captivating sci-fi story like Mass Effect or the polish of other high-end contemporary games, you’ll be disappointed. But, if you are able to overlook these and a few other niggling issues, Outriders is an undeniably fun experience where the fun multiplies twofold or threefold when you squad up with a mate or two.

Outriders is far from perfect. But a game doesn't have to be when it facilitates such a high degree of fun and interesting gameplay mechanics.