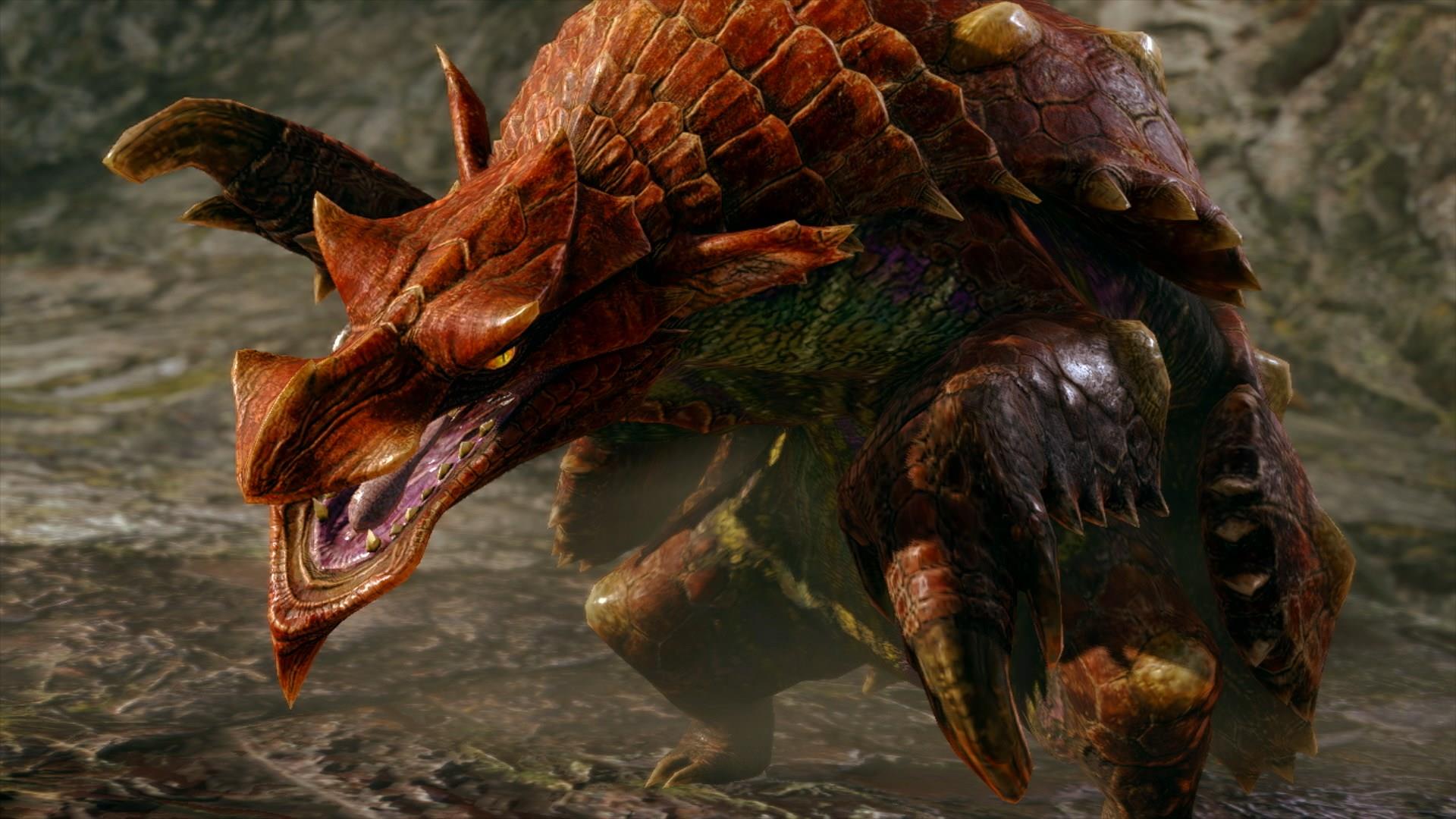 Written by Eric Hauter on 4/5/2021 for SWI
More On: Monster Hunter Rise

Monster Hunter Rise has been in my hands for a week, and after at least 30 hours of play, I feel like I am still learning the game. That is par for the course with Monster Hunter games. There are so many monsters to fight, so many recipes to craft, so many weapons to choose from, it is impossible to deliver a comprehensive review of a Monster Hunter game. I pity the QA team that has to test these things before shipping them, because the complexity at play here is completely out of control.

That is exactly what Monster Hunter fans want and expect. I wrote an article last week about how unfriendly the tutorials in Rise are to newcomers (which I totally stand by), and the internet predictably shanked me with comments and emails. There is a complexity baked into the DNA of Monster Hunter, and the impetus is on the player to push past the learning curve and figure it all out. But once you breach that barrier, Monster Hunter will never let you go. 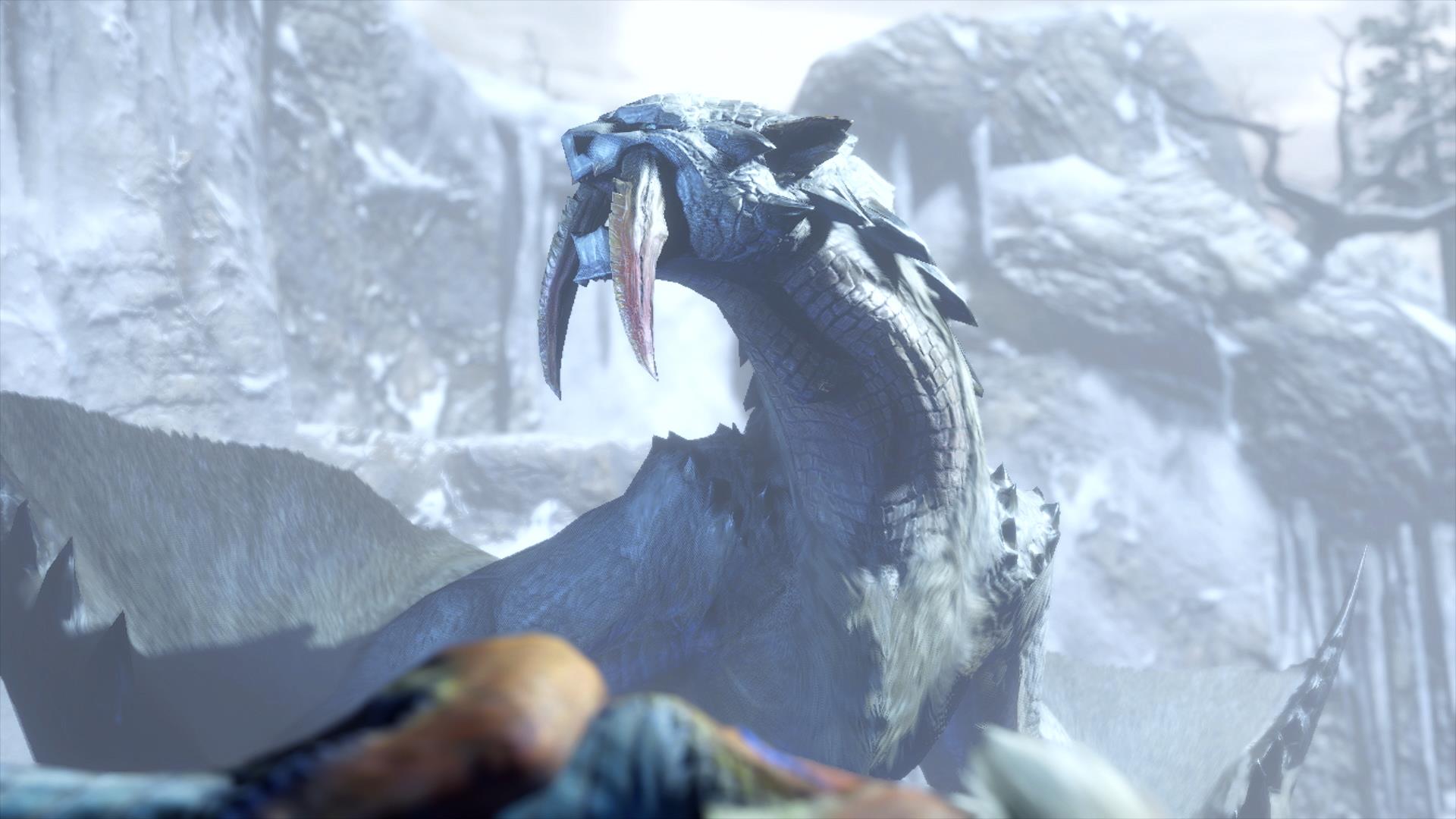 Monster Hunter games are deep beyond deep, and the more you play, the more you are compelled to hold your breath and dive under the surface and into the depths of that cold, dark menu system. The siren song of elemental advantages and well-cooked steaks beckons the player, and once the leap is taken, there is little hope of eventual escape. Monster Hunter has taken you.

Indeed, my biggest problem with Monster Hunter games is stopping playing Monster Hunter games. As a game reviewer, the gig dictates that I play a game, review it, and move along to the next one. Monster Hunter has hooks that make doing that nigh impossible. These games are built to push my particular gaming buttons, and similar to MMOs they deliver that amazing dopamine burst on such a regular basis that it feels like I am experiencing one sunrise after another. 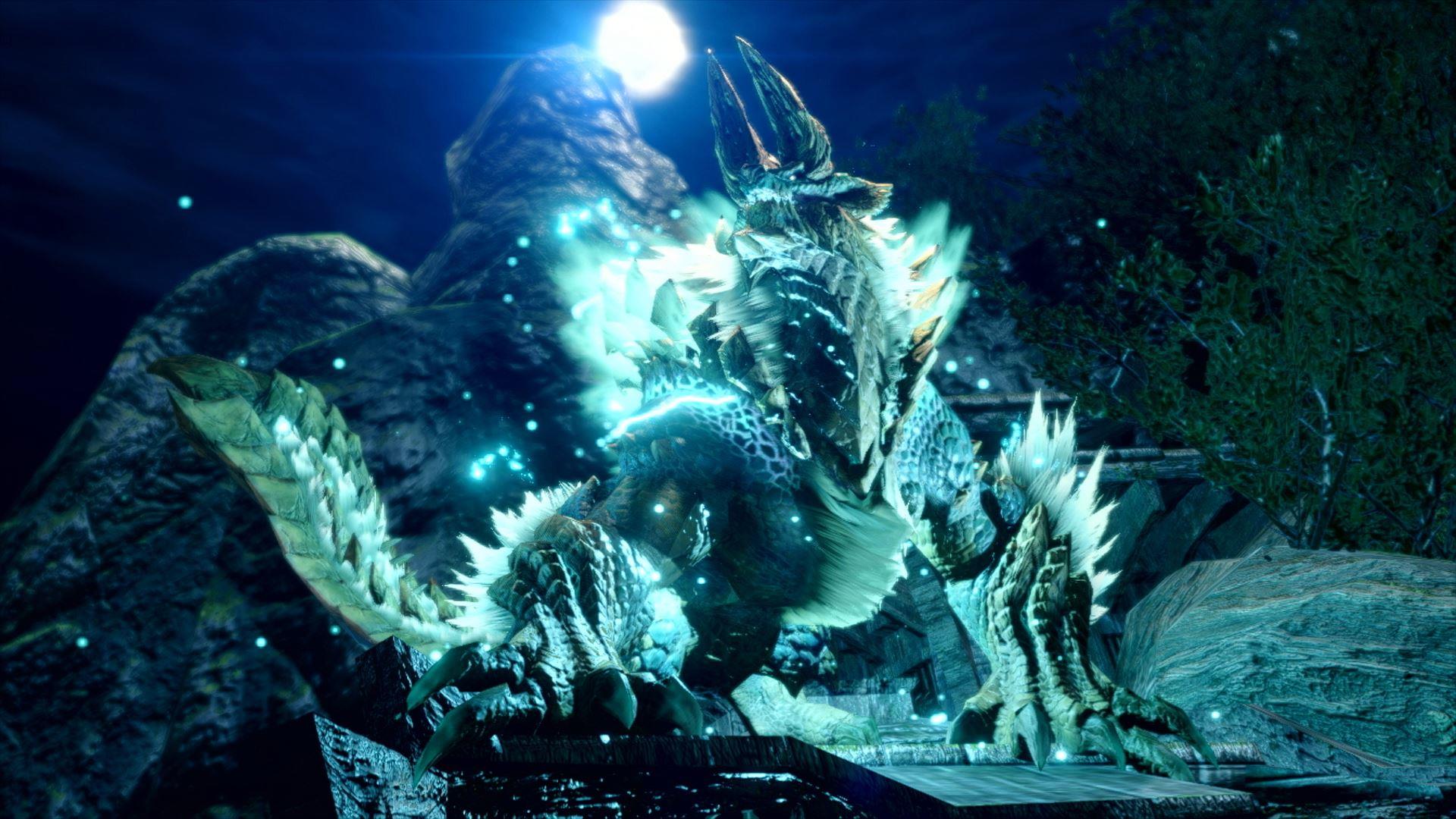 Monster Hunter Rise is no exception. Simpler to start than most mainline Monster Hunter games, and more streamlined than the sprawling Monster Hunter World, Rise feels like a hybrid of Monster Hunters past, drawing the best pieces of them all and boiling them down into suitably bite-sized chunks.

Monster Hunter Rise feels built for handheld mode. The expansive hubs of World have been compressed into smaller, easier to navigate centers, where you never get confused or turned around. There are no stairs to navigate to get to the shop, and the armor-making dude is directly across from the lady that gives you missions. Moving from quest to quest takes under a minute, as the player quickly zips around the little town taking care of shopping, eating, and grabbing a new mission. Bing, bang, boom, and its off to the next hunt. 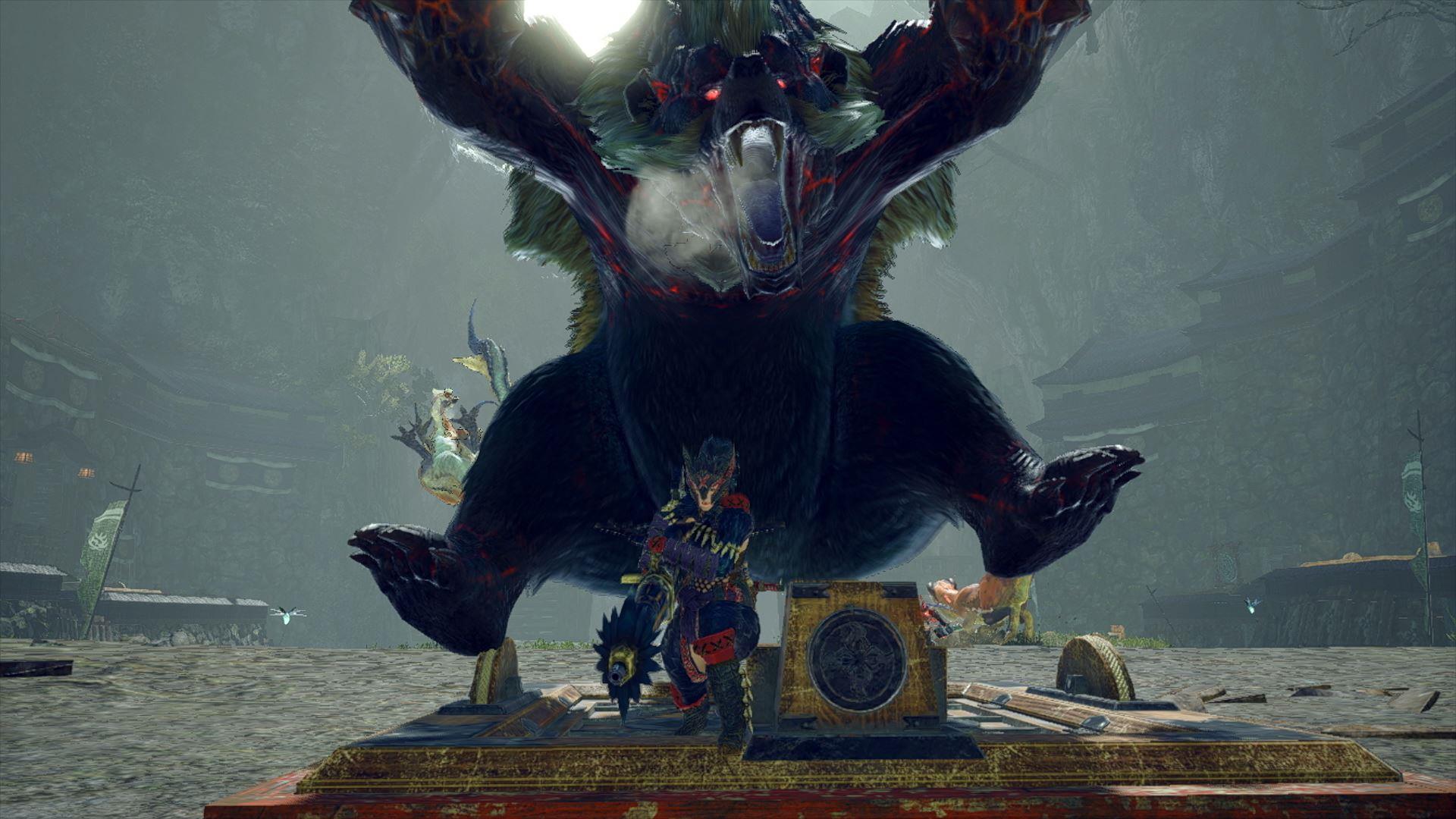 Hunts themselves are much easier to navigate as well. Gone are the days of wandering through zones, searching endlessly for the monster you need to kill or capture. These days, you just click the right analog stick, select the monster you want, and make a beeline for them. Once selected, the map will keep track of the beast, even after they shlup away trying to escape the beatdown you are delivering. This little UI change is an amazing time-saver, shaving hours of useless time spent ambling about in past games.

An even better timesaver is the addition of Palamutes, the canine steeds that you can use to zip around the map. Palamutes travel about three times the speed of a running hunter, making navigating the maps a breeze. You can even collect materials from your Palamute’s back, allowing you to whiz around each zone and grab everything in a matter of seconds. And of course, your Palamute will contribute to the hunt once you reach your destination. 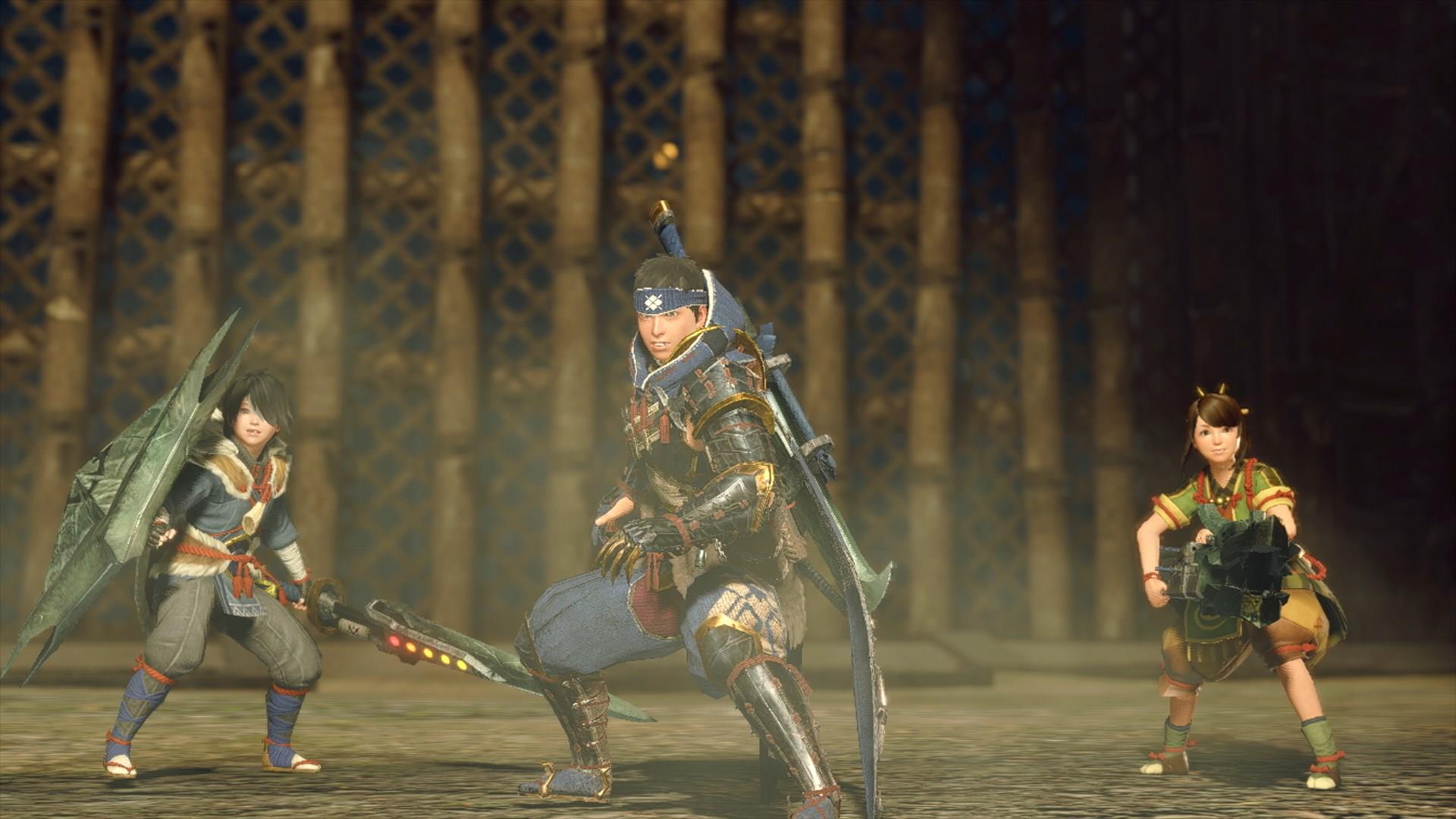 Hunts themselves feel full and challenging, but still manageable in short sessions. When playing solo, I typically set aside about a half hour for a monster I’ve never fought before, and maybe 15 minutes for one that I’m experienced with. As an added bonus, Monster Hunter Rise is not online all the time, allowing the player to put the Switch to sleep in the middle of a long battle and return later to finish it up. As a player with little kids running around the house, I can’t express how welcome this feature is.

Team battles are another matter entirely, of course. Accessed through a separate hub from solo hunts, team hunts have a completely separate progression, allowing solo players to complete the 25-ish-hour campaign in its entirety before ever jumping online to team up with friends or randos – both of which can be surprisingly fun and rewarding. The separate progression paths allow slower-moving folks like me to get accustomed to each monster, learn our weapons, and gear up with some decent weapons and armor before ever setting foot into the wild west of online play. This is a wonderful boon, as no matter how many Monster Hunter games I play, I still feel like a noob for the first 15 hours or so. 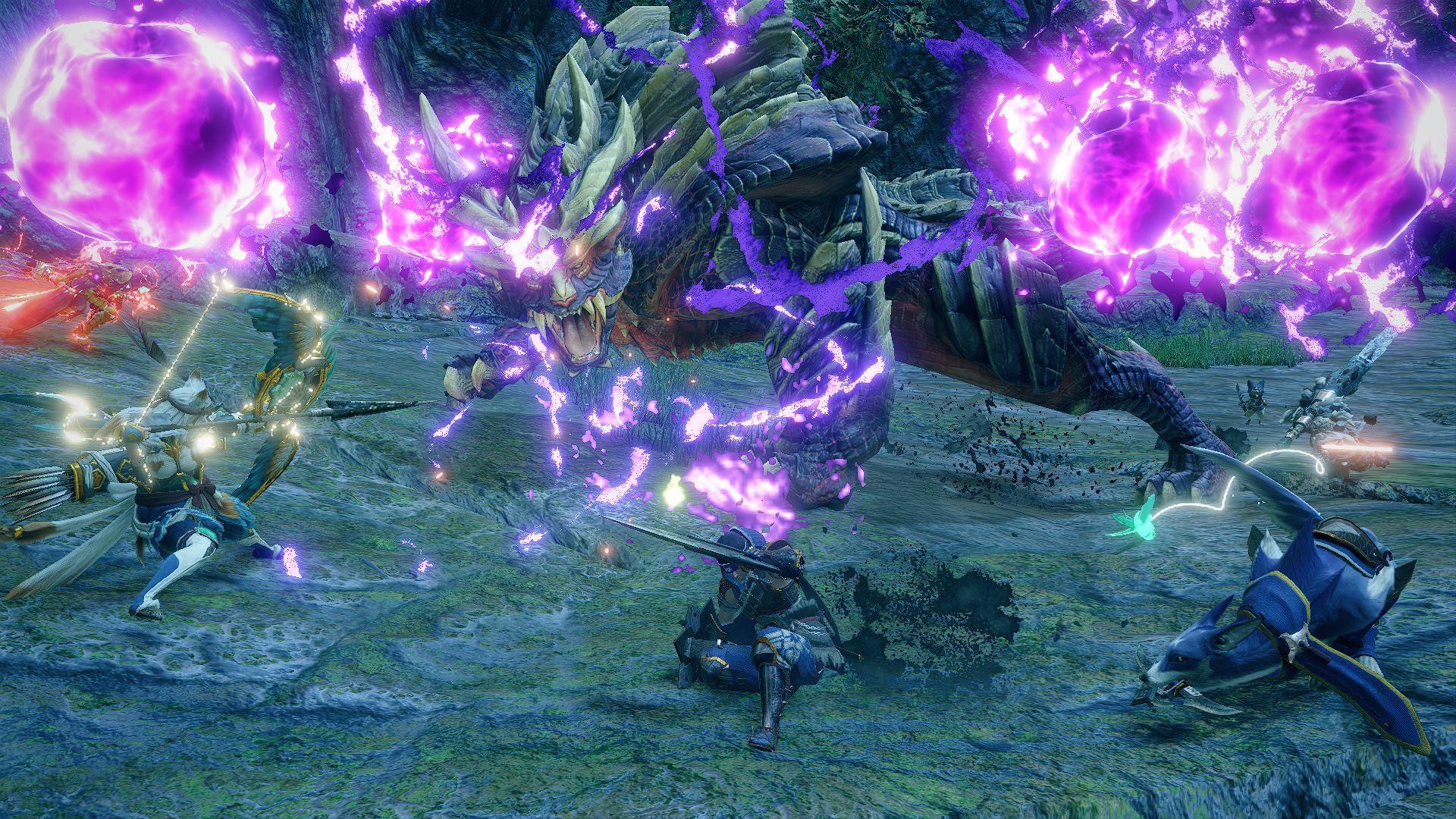 The flow of Monster Hunter Rise is still very much in line with the rest of the franchise. Players take on quests, which are usually hunts, but sometimes involve collecting materials or slaying a number of smaller animals. Once the hunt is started, players have 50 minutes to find the correct monster and slay or capture it. Doing so wins the player a pile of materials. Take those materials back to town, and hope that you have enough stuff to make a new piece of armor or a weapon variant. Rinse and repeat.

As the game goes on, more effort is required to complete armor sets, with materials coming from numerous areas or monsters. For psychos like me that must construct complete sets, there is plenty of delicious grinding to be done, diving into certain quests repeatedly to farm for materials, followed by the reward of gaining some new piece of armor. All of which bears the franchise’s patented mix of stellar design and self-parodying goofiness. 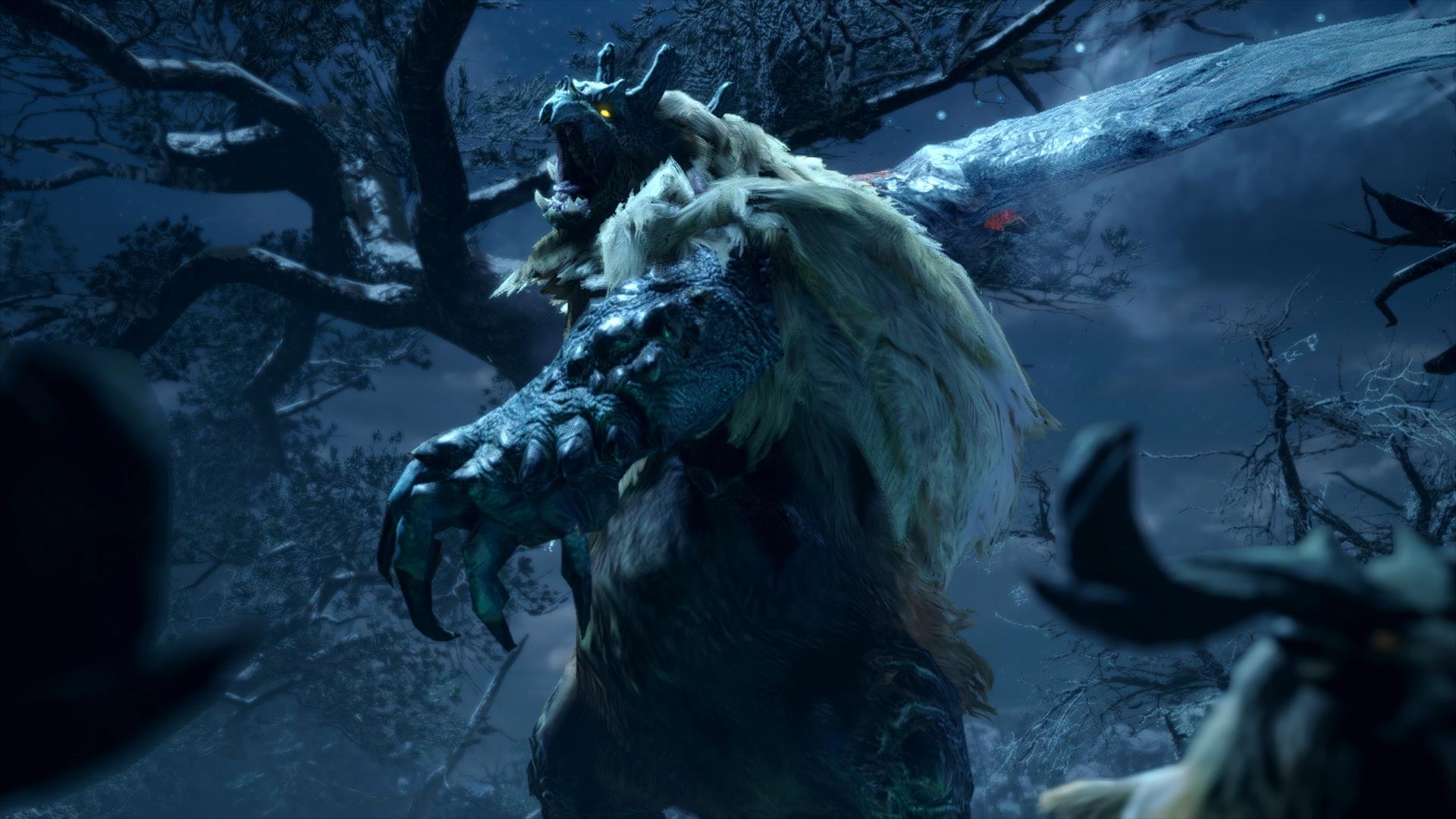 Several other clever new mechanics keep this storied and addictive loop feeling fresh. The addition of “Wirebugs” allows the player a certain verticality, giving them the ability to zip up walls and dodge attacks in midair. These become so integral to play that they can probably be considered a permanent addition to Monster Hunter, as players will rebel loudly if Capcom ever tries to pull them back out.

Along with Wirebugs, Wyvern Riding makes its debut, in all of its goofy glory. By performing certain attacks, or by letting monsters attack each other, players can create a prompt to jump on the monster’s back and ride it into battle for a few shining moments. You can attack other monsters, knocking vital materials from their bodies. Or you can just go full sadist, and launch the monster head-first into a wall. 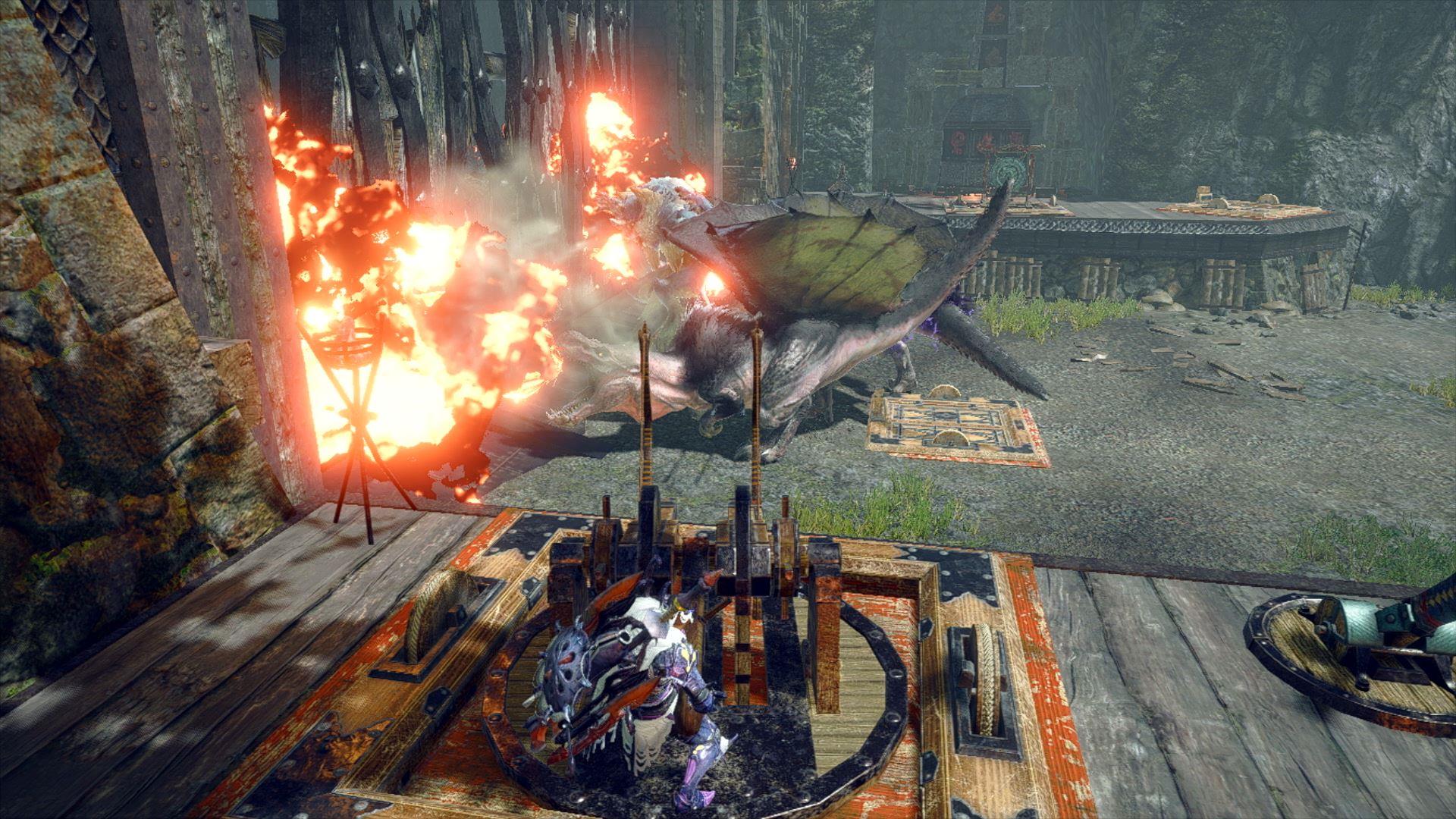 There is an underlying story to Monster Hunter Rise, but it only serves to give the game a little structure—and to occasionally push the player into some tower defense-like invasion missions. Though the story is so inconsequential that I often forgot that it was even in the game for hours on end, it doesn’t detract from the experience at all. Indeed, Monster Hunter needs this goofy glue to maintain the franchise’s careful balance of blistering action and lighthearted silliness. Its as integral to the experience as my trusty dual blades.

The Nintendo Switch acquits itself admirably here, pushing out graphics with a fidelity and detail that I would have thought impossible on a handheld. Even blown up on a large television screen, Monster Hunter Rise is a stunner. Whatever voodoo the team at Capcom is using to get this game running the way it does is beyond impressive, and is furthered by the way the game worked flawlessly on day one, without a hint of server problems, bugs, or even mild hiccups. The polish these titles launch with shames much of the rest of the video game industry.

Monster Hunter Rise has everything you want from a Monster Hunter game—weird cat cutscenes, gorgeous graphics, soaring music, amazing armors and weapons, endless quests, and a huge selection of beasts to slay—all wrapped up into a package that is remarkably suited for handheld play. If you are a fan of this franchise, there is no way to go wrong with Rise. If you are new to the fold, grab a Wiki and jump on in. There's a reason that people love these games, and an entire ecosystem of monsters and delights is waiting for you to discover it.

Monster Hunter Rise pulls the best features from past games to create an experience that feels particularly tuned for a handheld system. With plenty of quality-of-life improvements and several fun new mechanics, Rise pushes the franchise forward while retaining all of the depth and fun that fans expect. Another stellar release from Capcom.