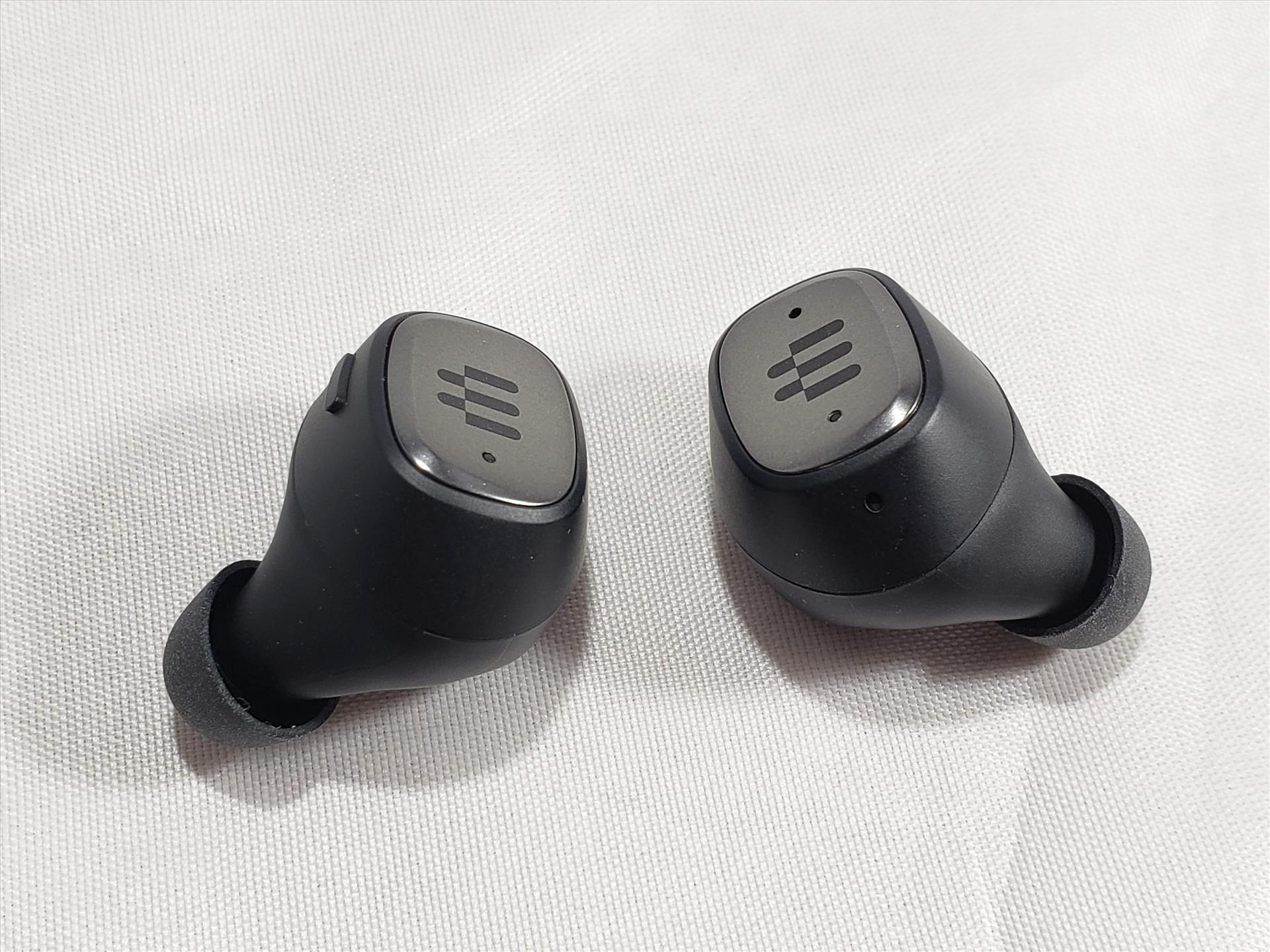 When thinking about gaming audio, I don’t expect many people think of ear buds as the best option for listening when playing a game. Most gamers have over-the-ear or on-ear cans they use when sitting in front of the computer. EPOS is looking to change that a little bit with a new set of earbuds designed for gaming.

The EPOS GTW 270 Hybrid is a set of earbuds that’s looking to deliver lag-free audio via Bluetooth aptX Low Latency. EPOS was kind enough to send me a set to test out and the timing was perfect because I was looking to do an article on Bluetooth gaming with aptX low latency. 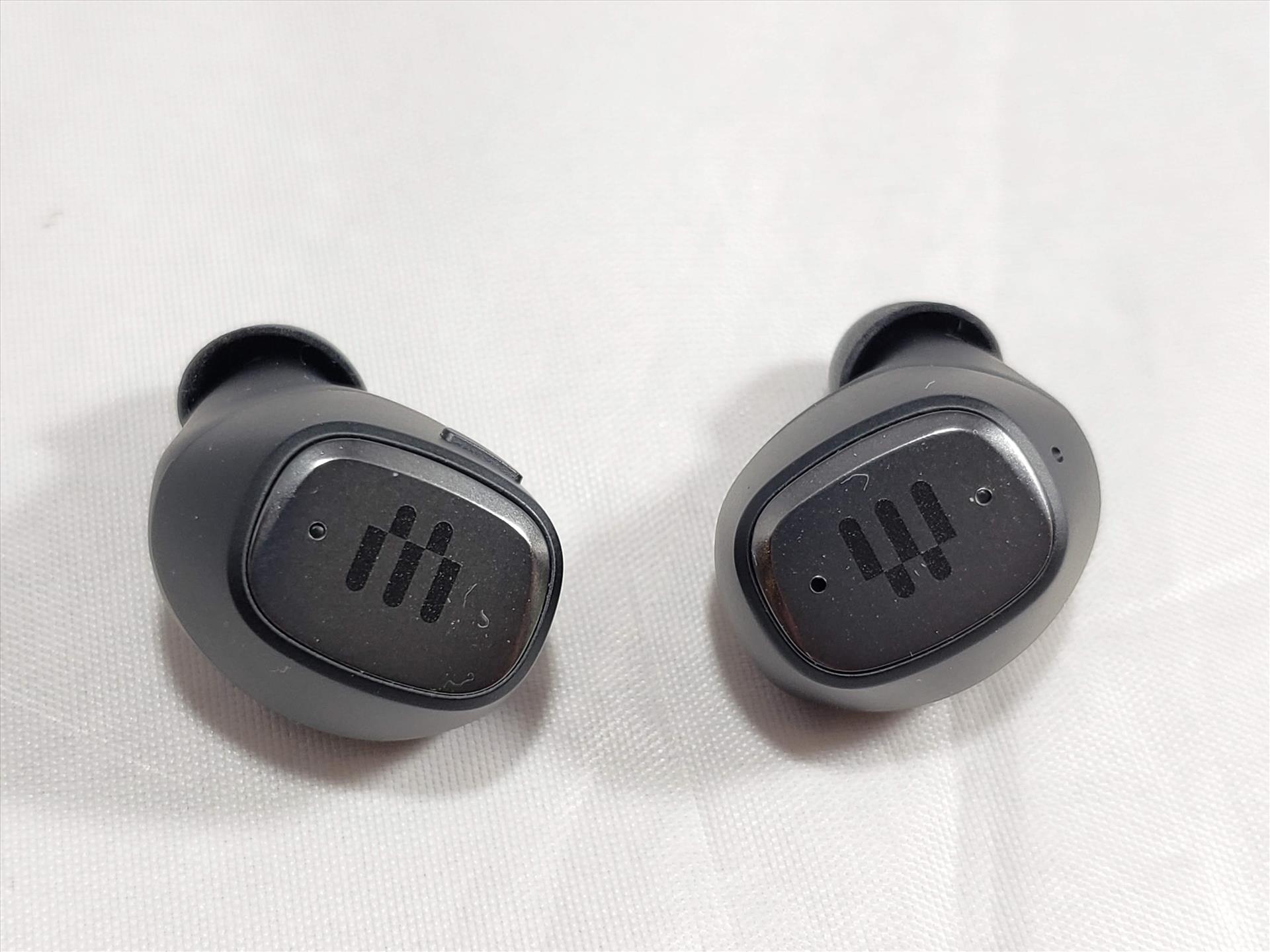 The GTW 270 Hybrid comes in a standard setup with a charging case that houses the ear buds when not in use. The ear buds fit securely in the case via magnets that are strong enough to hold them in, even when I turn the case upside down and try to shake them out with the lid off.

For the ear buds themselves, the EPOS GTW 270’s design are pretty standard. Outside is a gunmetal grey coloring with the EPOS logo. Inside are many contacts that connect to the pogo pins in the case for charging as well as for firmware updates. The silicon tips are soft and do well in blocking out sound, as well as help keeping them in place. Included are a few other tip sizes so you should be able to find one that fits your in your ear comfortably.

On the left earbud is a single button that’s used for media functionality. This is actually one of the things I found lacking in the GTW 270. In ear buds that were less expensive, I’ve seen touch controls that help you control media and adjust volume. The GTW 270’s only have a limited set of functions with the single button. You can do your basic skip, backtrack, pause, play, and some voice assistant activation. I’ll talk more about pairing with a phone in a bit, but I did miss the ability to adjust the volume n the earbuds themselves. Granted, if you are using this with a computer you’re pretty close to controls either on the keyboard or a mouse click away to adjust the volume, but I found I use the volume knobs on my other headsets a lot subconsciously, so the lack of that ability here is a little disappointing. 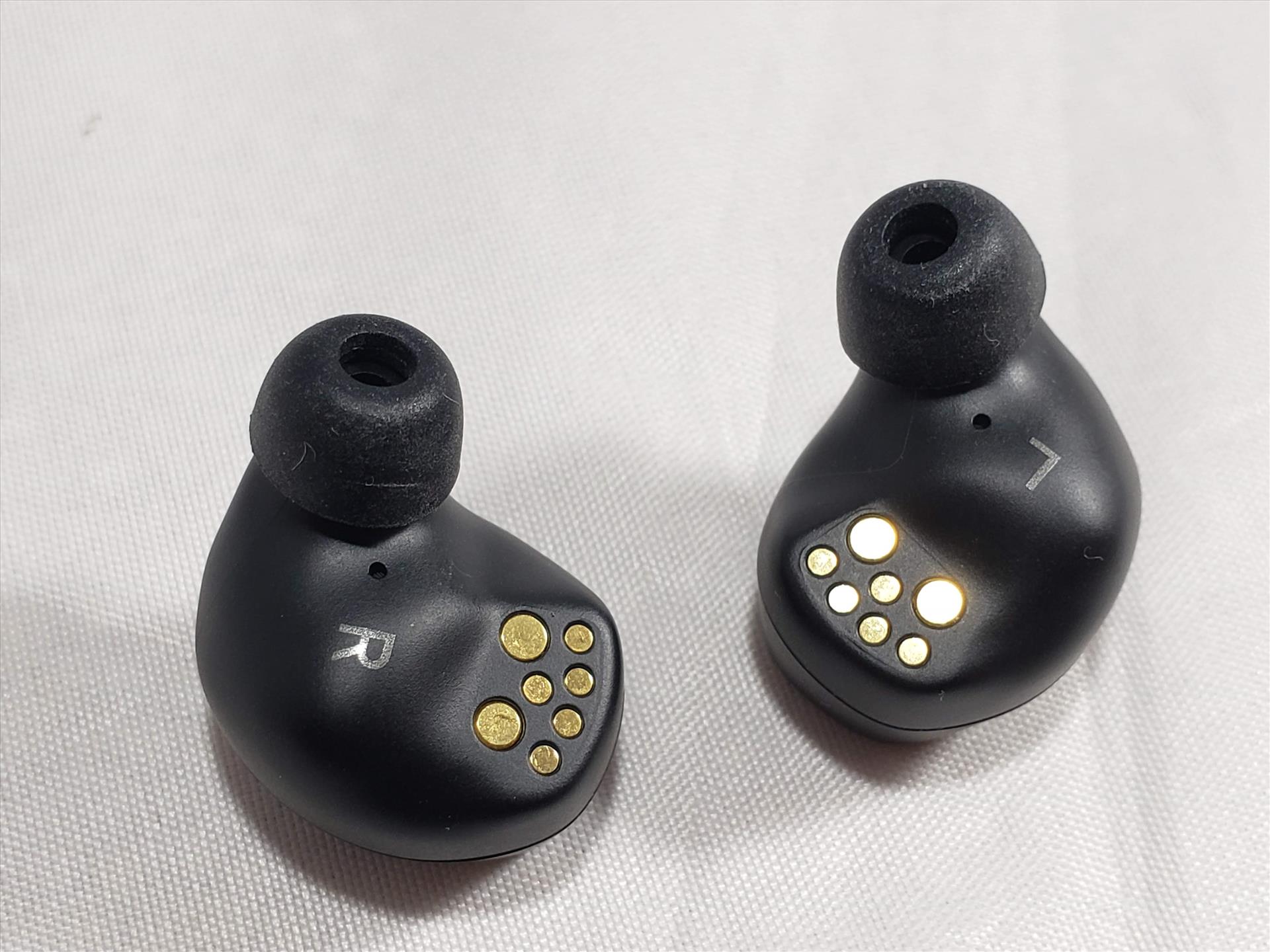 If you want to just have one earbud in, you can do fine with having the right one inserted and the left one out if you need to listen to your surroundings. One nice thing about the GTW 270 is that it does a good job of blocking outside noise. I did occasionally have to take my earbuds out to hear my daughter yell at me, but in case you do want to keep one ear free to hear others, there is that option.

The GTW 270’s are also rated at IPX5 so they can withstand some sweat as well as splashes of water. For those that will use these with their phones and going out and about, you won’t have to worry about rain damaging them, which offers great peace of mind when it comes to using expensive earbuds like the GTW 270 away from home. 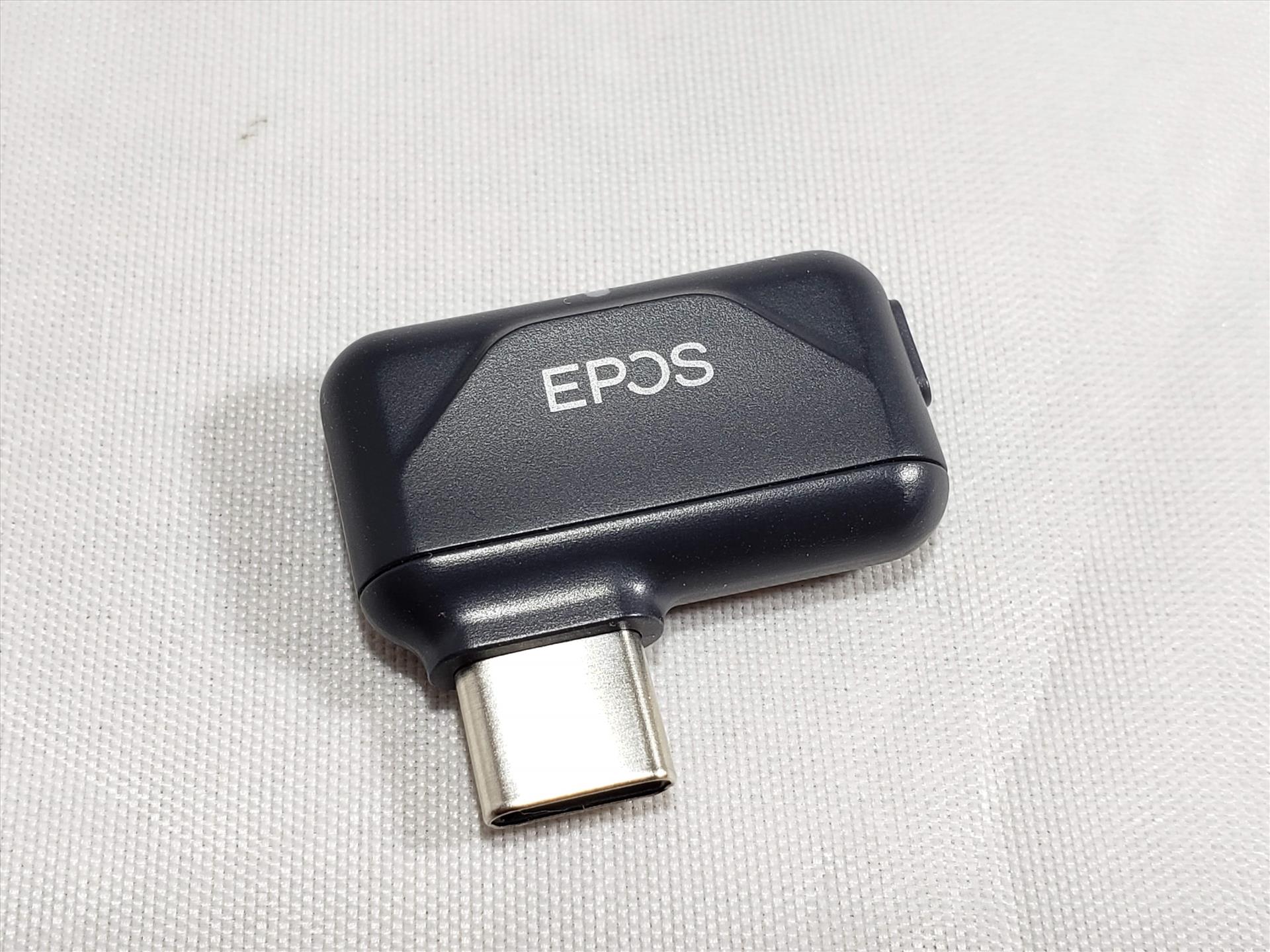 For use with a computer or a console not from Microsoft, EPOS has included a USB-C dongle as well as an extension cable for the dongle. It comes paired with the earbuds out of the box and allows for aptX low latency compatibility with the earbuds. This is essential for lag free audio and EPOS even includes a nice little cover to protect it. Now, if you already have a aptX low latency dongle (for example, the Creative Labs BT-W3), you can essentially get the GTW 270 sans dongle for $30 less and you’d have the same functionality. I say that because I was able to pair up the GTW 270 Hybrid with my BT-W3 and it worked just fine.

EPOS advertises 5 hours of use before charging with the case providing an additional 15 hours of usage. My testing confirms EPOS' claims. I was able to get through more than half a day with the earbuds before I had to pop them back into the case. The case, thankfully, has a USB-C connector to connect to your PC or charging outlet. While I think USB-C should be the norm these days, I’ve found some recent devices still using the old micro-USB connector and I’m glad EPOS decided to go with the better connector here.

When plugging the dongle into my PC and taking the earbuds out, it takes a few seconds for them to connect to the dongle then you’re good to go. It was pretty painless and for the most part, they connected when removed from the casing without any issues. There may have been once or twice in my month testing that I had to put them back in the case and take them out, but for the most part, there were pretty reliable in connecting to the dongle. 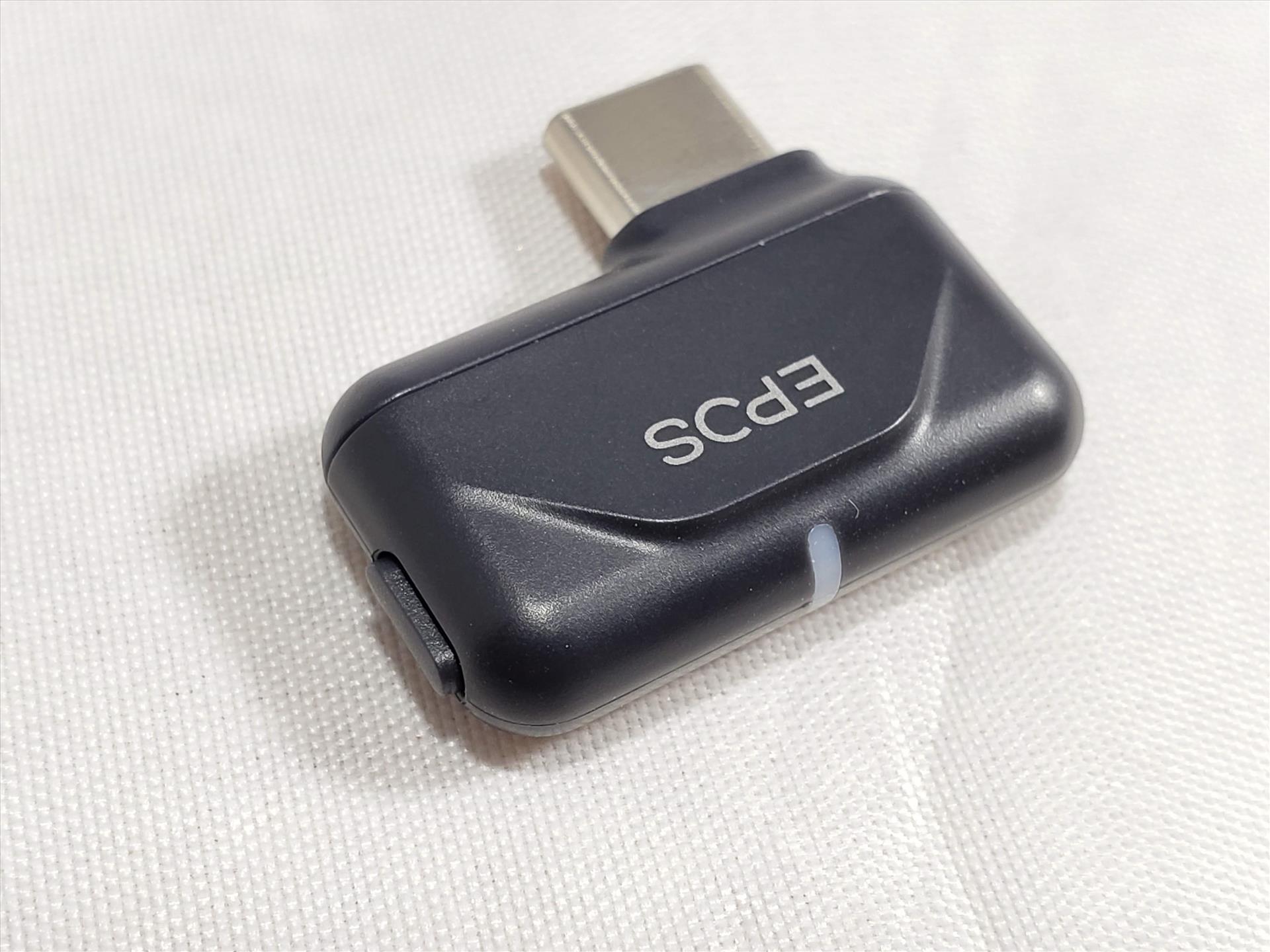 Audio is crisp, clear and somewhat punchy for earbuds. I played a variety of games from first person shooters like Call of Duty: Black Ops Cold War and 7 Days to Die, along with some third person games like Valheim to test the GTW 270s out. The mids and highs were terrific and I could make distinct sounds of gunfire and footsteps really well. I was able to hear when people were walking near me or zombies were shuffling about close to my hiding position. The bass, as I expected, was just okay, but I think that’s par for the course for most earbuds. It was fine, not too strong, but pronounced enough for earbuds. But make no mistake about it. EPOS knows audio and the GTW 270s sound great for gaming even if the bass is not as deep as a good set of similarly priced headphones.

And yes, I could not detect any lag when playing. I’ve used a ton of Bluetooth headphones to try and game and every single one that didn’t support the aptX low latency codec had a slight, noticeable delay from action to audio production. Here with the GTW 270 using aptX low latency, I found the audio to match up what was happening on the screen, which is awesome.

You might be saying, well why is that great? We have that now with wireless dongles anyways. Yes, we do, but we do have a codec now that supports pretty much lag free audio without a need for a dongle should a device support it. There are a few phones out there right now that do, but we need more. And did you know Windows 10 has aptX low latency support? There was a driver by Dell that enabled this and this was released in October of 2015, limited to certain Intel based cards. That was six years ago. If more phones and PCs supported this, we could get more Bluetooth-based audio devices that enabled playback with no noticeable lag and without the need for a dongle.

There is one downside to aptX low latency and that’s the inability to use the built in microphone when in this mode. aptX low latency doesn’t have the bandwidth to support both audio and voice so for those who want to use these earbuds on applications like Discord, you’re going to need a separate microphone, which is a big negative to this codec. With today’s environment of distanced communication through the computer, that lack of voice support makes it a pretty solid con to the entire setup. Now, if you don’t care about talking to others and just engage in single player games, then the GTW 270 will just be fine for you. If communication is important to you in gaming, then this is definitely not for you. 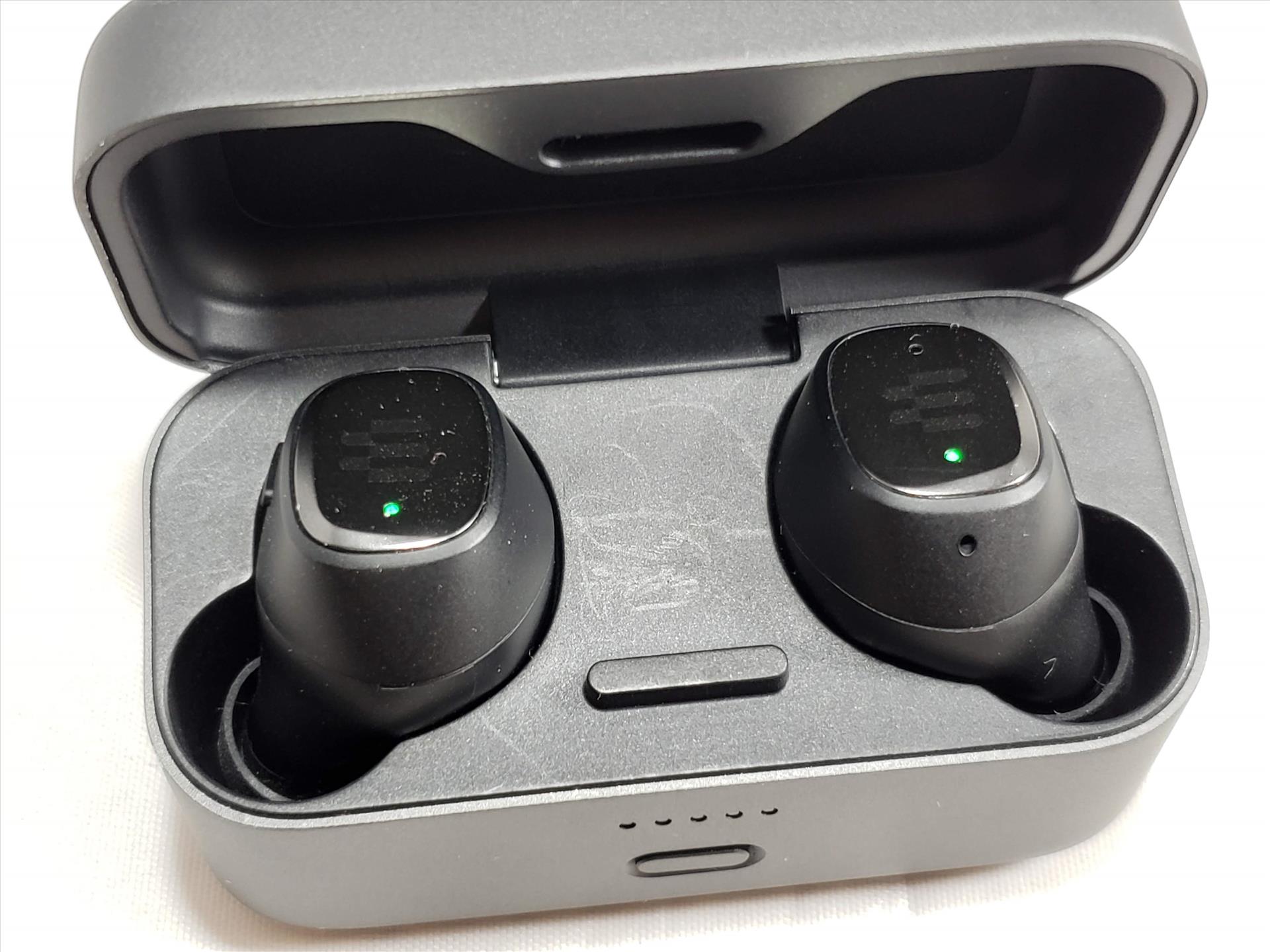 The GTW 270 does have built-in mics for normal voice calls and you can use them in that mode when paired to a phone. One nice feature is you can dual pair to the dongle and the phone and if you get a phone call, one press of the button will answer the phone and switch your audio over to the mobile device allowing you to answer the call without having to take the earbuds out.

Compatibility exists with every console but Microsoft ones. If you’re a Switch, PlayStation 4, or PlayStation 5 owner, these will work fine, and it’s nice to not have a cable connected to your controller or Switch at times. Again, voice will not work but at least with say the PlayStation 5, you can use the controller’s mic to talk to people.

Range can be a hit or miss though. It was a little inconsistent in that sometimes I could be a floor above my computer and I can hear the audio fine and there were times I was but a few feet away and it would do intermittent drop outs. EPOS does include a nice little USB extender so you can connect the dongle to it and move it away from your computer to reduce the chance of interference. It does seem aptX low latency can be a little more picky about interference and I found using the cable and hanging it away from my other computer parts does make a nice little difference in getting solid audio connection.

For those looking for a solid pair of earbuds to game with, the GTW 270 Hybrid offers great sound and lag-free gaming audio, retailing at $199. Yes, they are a little expensive, but they sound great and fit well. The lack of voice when using aptX low latency will be a deal breaker for some and the lack of touch controls or volume control is disappointing. Other than those criticisms, I found the GTW 270 Hybrid to be a solid choice for gamers wanting a small set of earbuds to game with.

The EPOS GTW 270 Hybrid are a solid set of great sounding earbuds that offer lag free gaming audio that other Bluetooth earbuds don't have. It's too bad you can't use the mic when in aptX low latency mode. I would also have liked more controls on the earbuds. They sound excellent and can pair up with your phone to answer phone calls when gaming.