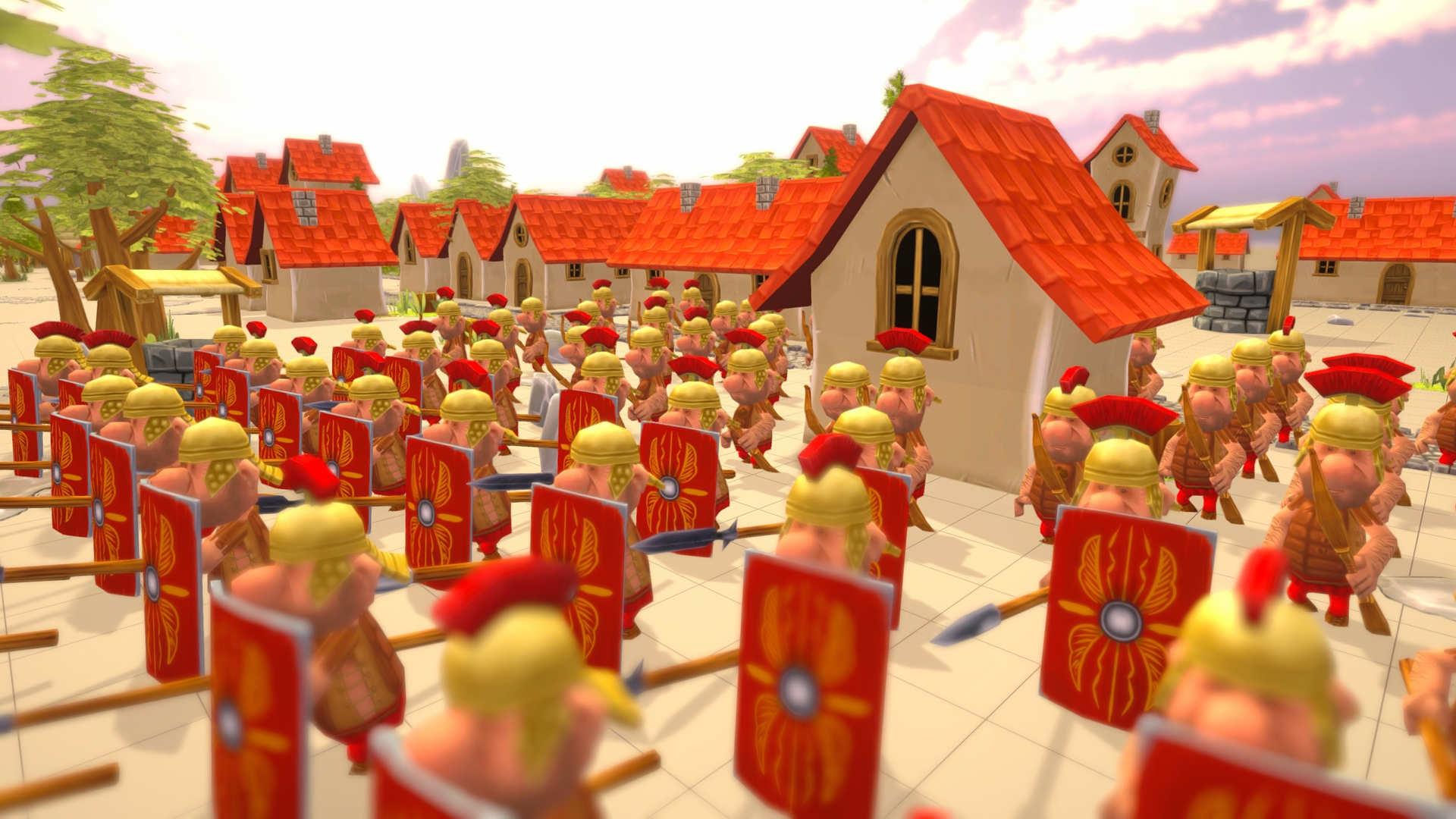 Written by Elliot Hilderbrand on 4/12/2021 for SWI
More On: Gallic Wars: Battle Simulator

Gallic Wars: Battle Simulator wants you to lead the charge to Rome and claim it for yourself. The biggest problem happens to be that they give you little sense of how to go about it. Battles go by fast, too fast to apply strategy towards once the battle begins. But that doesn’t matter because once the fighting starts there’s nothing left to do but wait for the outcome. Once I understood the mechanics (which took more effort than it should have) strategy didn’t play a big part in the experience.

The tutorial does a great job of explaining how to set up and move your units. Once you are on your own in the campaign it becomes quickly forgotten. I found myself going back to play the tutorial several times just to recall which order of button pushing I had to do. The main issue is that two or three buttons perform most of the tasks - picking the type of unit, moving units to the starting location, setting a waypoint location to move the troops. Instead of those being the buttons on the side of my controller, they were my right and left bumpers. Sometimes you hold the left bumper down, sometimes you just tap it, it all gets very confusing. I played about five games, losing pretty quickly in the early levels, before finally getting the hang of it. I still never learned how to change the direction units face before the start of the fight, but its not like it really mattered. 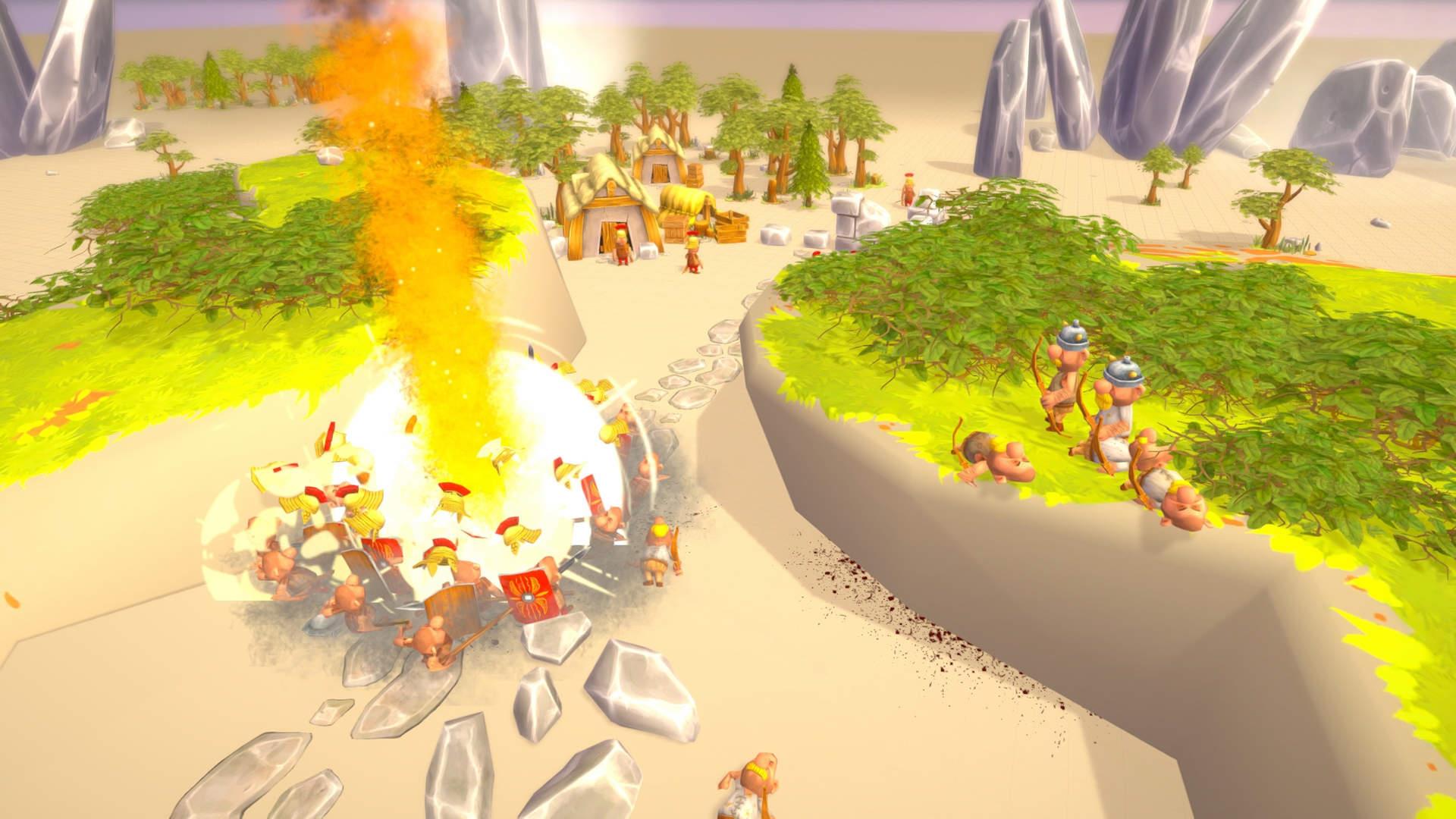 In the game you sit in front of a board. The goal is to go from your side (south) to the far side (north), which happens to be Rome, and you can get there by many different ways. You start by picking from a handful of available battles available to you, between two and three. You also select how many units you want to devote to said battle. It helps to think of each tier on the board as a level and each battle as a section on that level. You don’t have to play each section on the level, just one. Which again in theory would matter, but if you just want to beat the game then you need only pick one battle per level.

Once you win or lose, you can continue to battle on that level or move up to the next one. Staying on that level can net you more troops, or cause you to lose the campaign and have to start from scratch. I quickly learned that there was little need to stay on a level, the game was very winnable by doing one battle in every level until you reach Rome. I understand the attempt at the risk/reward of this mechanic, but the implementation feels off. The rewards only net you a few additional units, and in the grand scheme those units seem to mean very little.

The roguelike element at play lives within the battles, which are different every time you play. Great in theory, but the execution isn't there. Battles seem nearly identical from one to the next. Maybe there’s a house in this battle and a hill to go around on the next one, but that's about it. There's not much strategy to picking your battles, and once I got the hang of the game I stopped losing battles altogether. You start with the deployment phase, setting up your units, of which there are only three types, guys with swords, guys with shields and spears, and guys with bows. Almost a rock, paper, scissors format. Almost. Once you learn the trick of distancing them at certain places before battle begins you never lose a fight.

That distancing comes in the planning phase. You can set your units wherever you would like, and you can set waypoints for them to travel to, but once the battle begins you’re left to watch the mayhem. The ragdoll physics are funny and cartoony to watch, but the camera angles are poor and maps are so big that it is hard to catch all the action while it’s going down. There is also no way to move troops to new positions during battle, so you have to think about where you want to send your troops and hope that the enemy is going to meet you on the field of battle. Sometimes they do, other times you walk around each other several times before it triggers the fight. Some battles are on a field so big that it doesn’t matter how you set up your troops beforehand. I found it annoying to set my troops up, only for nothing to happen, with me having no way of controlling my units once the battle started. All I could really do during the battle was to tell them to flee, which forfeits that battle, but can help the player maintain some of their units instead of losing them completely. But that didn’t really matter either, because if I moved up to the next level my troop numbers reset, so giving up on a battle did nothing but net me a loss. 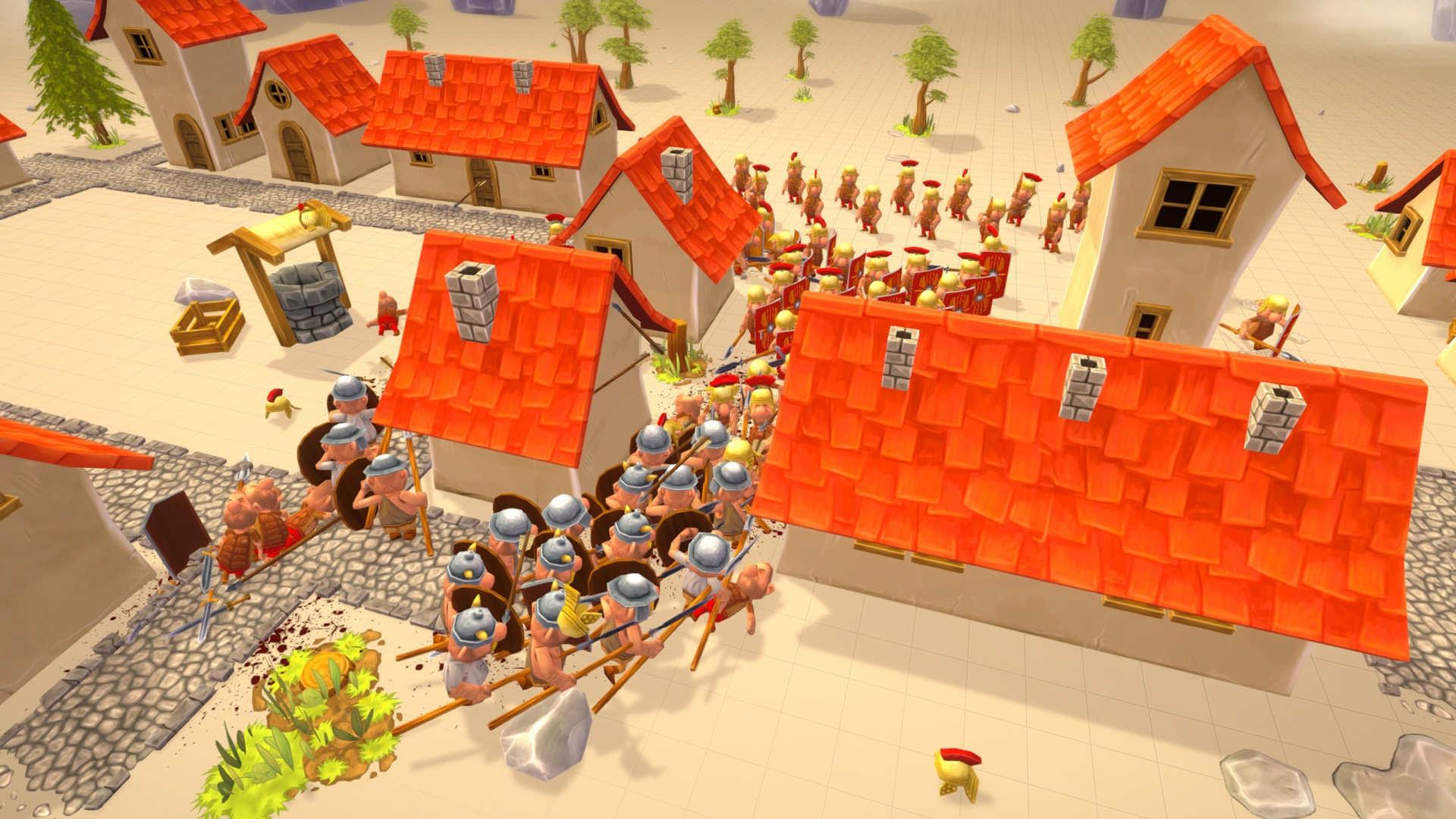 If you play your cards right, or just play until you understand how to set up your units in the correct way, you’ll find yourself at the end of the board attempting to sack Rome. By the fifth try I had found myself knocking at the gates, eager to see if this would be a true test. Spoiler alert, it wasn’t. The fight was massive, and it took several minutes to sack Rome in my glorious name. Once I had beaten the game, less than an hour after starting it, I found that I had zero motivation to play again. I forced myself into playing again immediately after winning to make sure it wasn’t pure luck, and then didn’t bother to play for the rest of the week. I figured I should give Gallic Wars: Battle Simulator another shake before reviewing, and about a week later I discovered I had already forgotten all the confusing controls, with the camera angles in battle upsetting me to the point I had to play in handheld mode so I could see what I was doing clearly. I couldn’t believe I had the patience earlier that week to play the game. 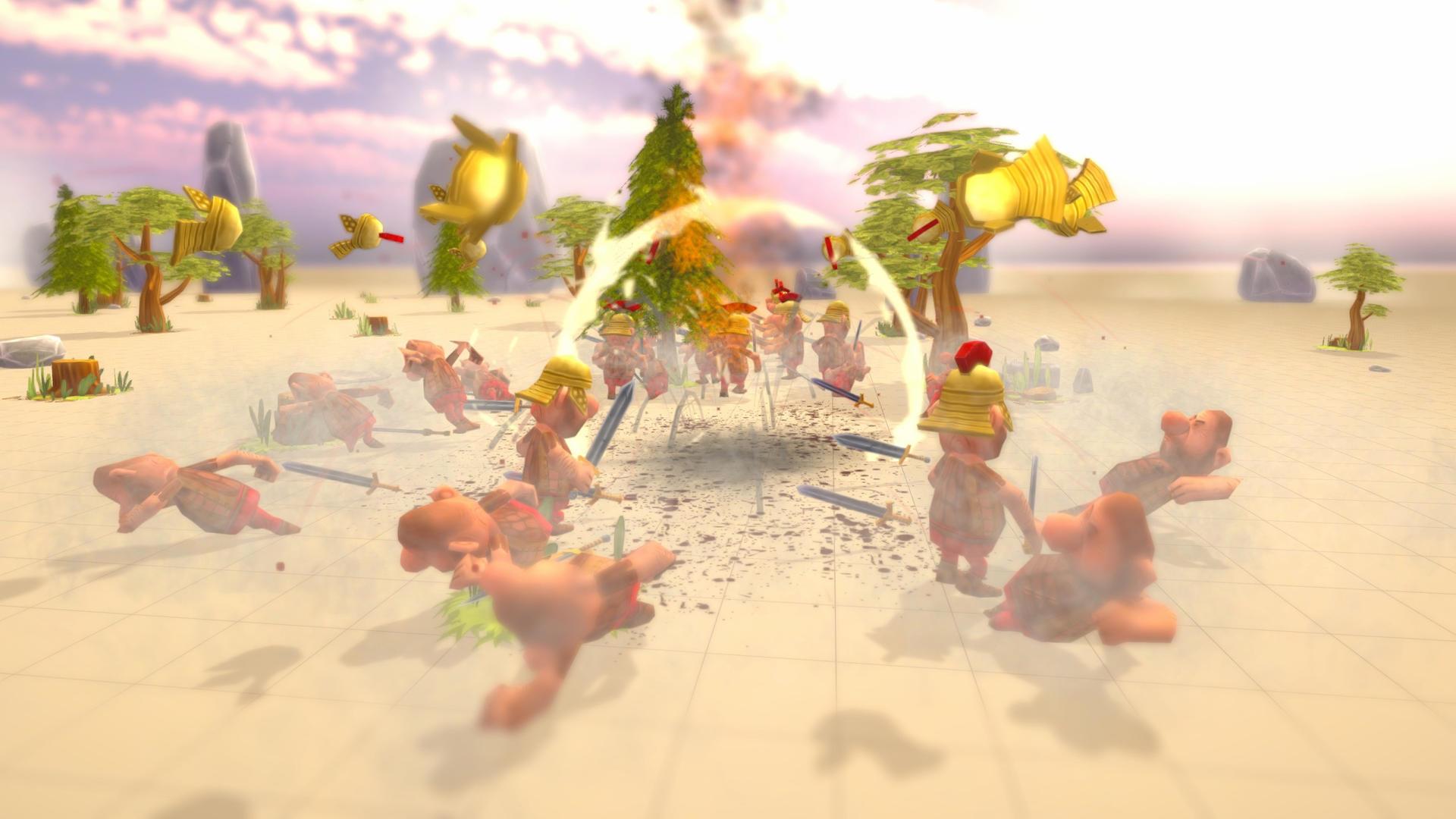 Gallic Wars: Battle Simulator has a solid foundation of ideas. The execution of the ideas leaves a lot to be desired. Gameplay consists of simply setting up units, and just by guessing you have the same chance of winning as putting thought into placement of units. There's not enough of a roguelike element to the game to find much replayability. The graphics seem a tad out of place for a game on the Switch (it’s available on PC as well), but Gallic Wars would fit well on a phone.

They say to shoot for the moon and if you miss you’ll be among the stars. Gallic Wars: Battle Simulator shoots for the moon but you quickly realize you’re not in a rocket ship but a bicycle with training wheels. Trying to fly a bicycle to the moon has a lot of issues, in this case it's the gameplay elements, the obscure camera angles, and the repetitiveness that has Gallic Wars landing in the grass five feet from takeoff.