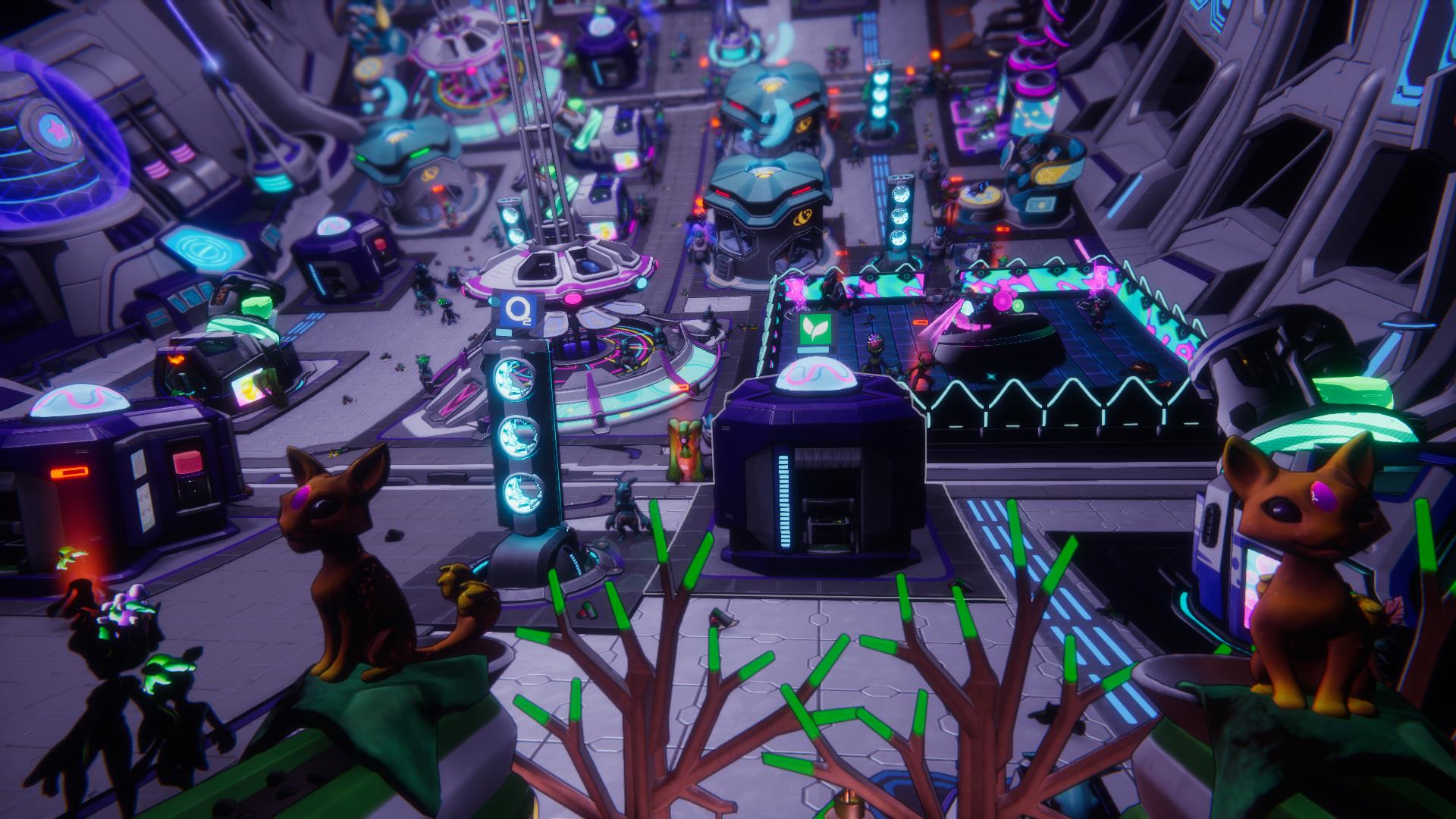 Spacebase Startopia is something of a white buffalo—it is a strategy construction game that is so laid back it is almost relaxing. Though each of the ten levels in the game adds complexity to the proceedings, the ramp is so smooth that you will barely notice how much stuff you are managing. In fact, there were times in the middle of the game that were so chill that I was able to pull out my phone to check my emails while waiting for materials to accrue. And while that isn’t necessarily a good thing, I didn’t really mind all that much. 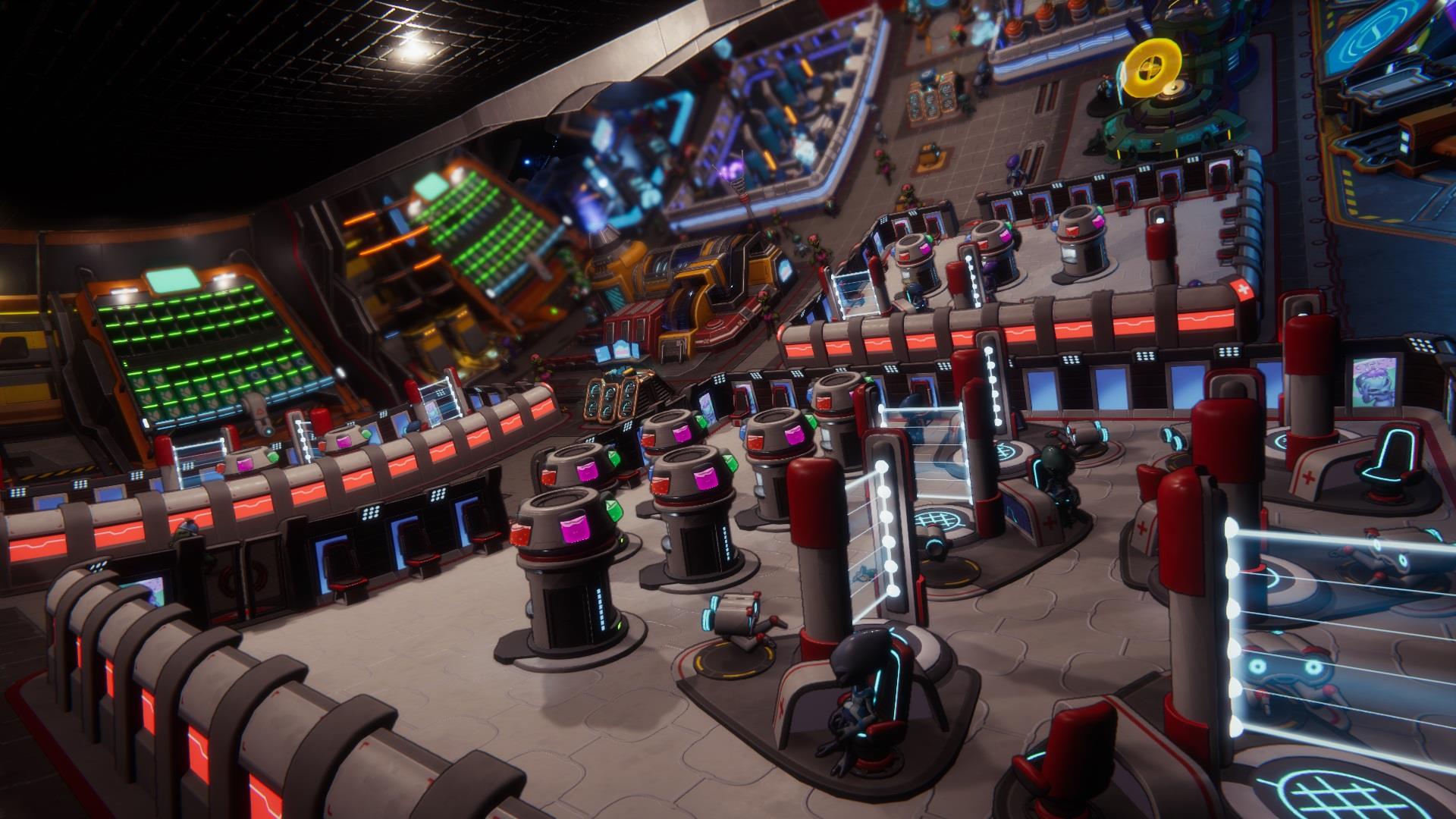 Spacebase Startopia puts the player in control of one of those round space stations that seem to proliferate modern science fiction. You know the ones. They look like big white donuts floating in space, and due to the rotation, there is some semblance of gravity on the outer wall. Each of these spacebases is a magnet for the local aliens, so it is up to the player to keep visitors happy, healthy, and entertained, while still trying to accomplish each level’s overarching goals.

Every level starts the player with a fresh spacebase, allowing them to design from a blank slate. This is not one of those hospital-building games where you construct some megalith that grows further and further out of control the longer you play. More than anything, Spacebase Startopia reminded me of an amusement park building game. But instead of endlessly expanding, the player is challenged to hit certain goals and then start over again. You hit your goals, the level ends, and it’s off to a new spacebase to start again. 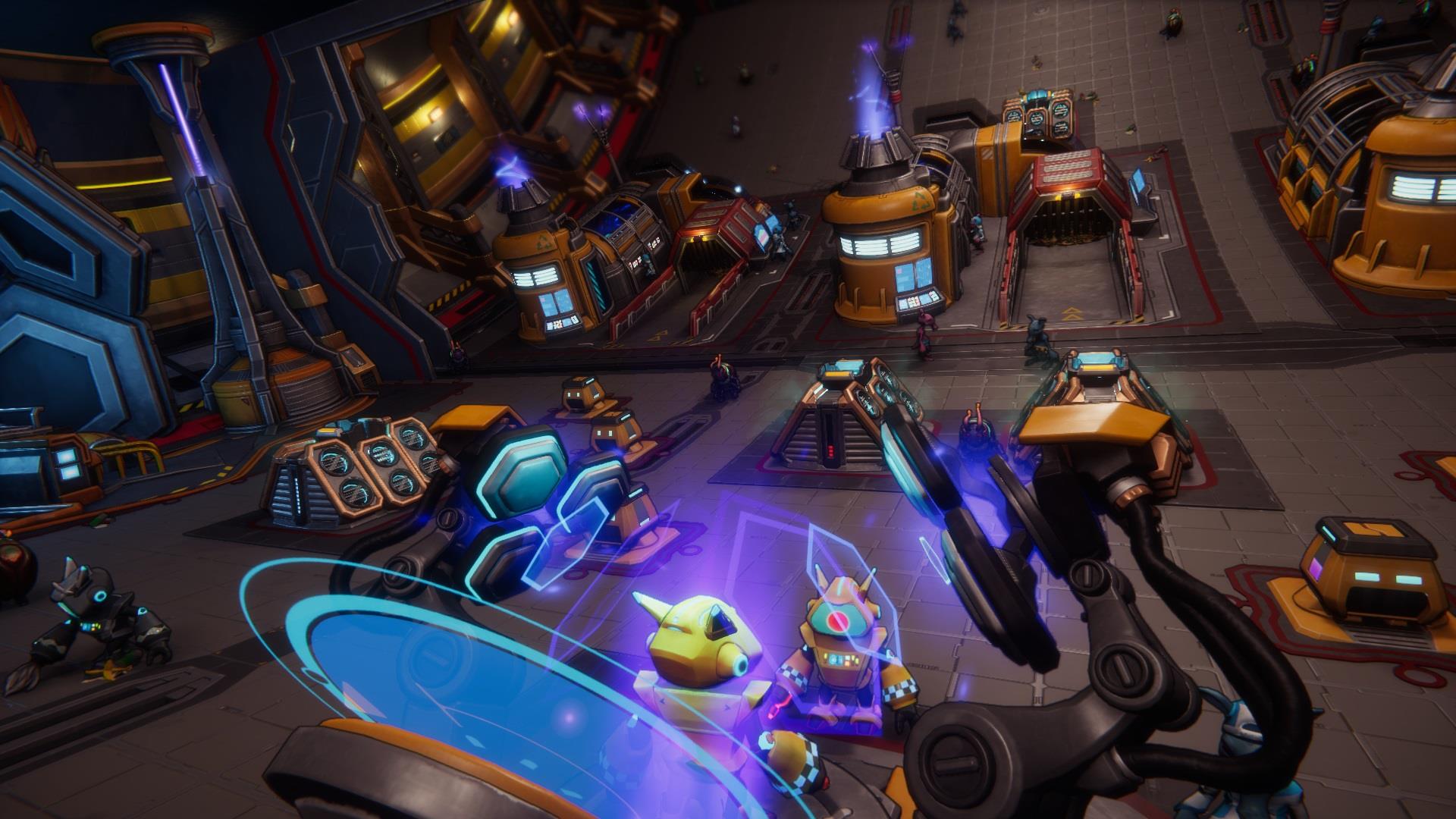 Of course, there are some initial steps to be taken that are the same every time, and players will quickly fall into a pattern at the start of each level to lay down some much-needed infrastructure before pursuing the level’s goal. You gotta slap down a Fuzzy charger (Fuzzies are the robots that do your construction and clean-up). You need a berth for visiting aliens to sleep and bathe. A medical center is never a bad idea. And before long, you’ll be building things like security centers and brigs as a matter of course.

But once you have that stuff up and running, there are even more areas to design and build. The Spacebase is split into three levels, each of which serves a distinct purpose. The Sub Deck contains all of the above stuff—the apparatus required to keep the place going. The Fun Deck is an amusement park for alien visitors, full of discos, arcades, and bizarro thrill rides. Also optional on the fun deck are those weird inflatable dancing balloon guys. I filled almost an entire deck with them once, just to see if I could. Below that is the Bio Deck, a space filled with flora and fauna from various worlds, which can be farmed for resources. A fun terraforming tool lets you build and raze areas to reassign the worlds emulated, and alter the goods being produced. 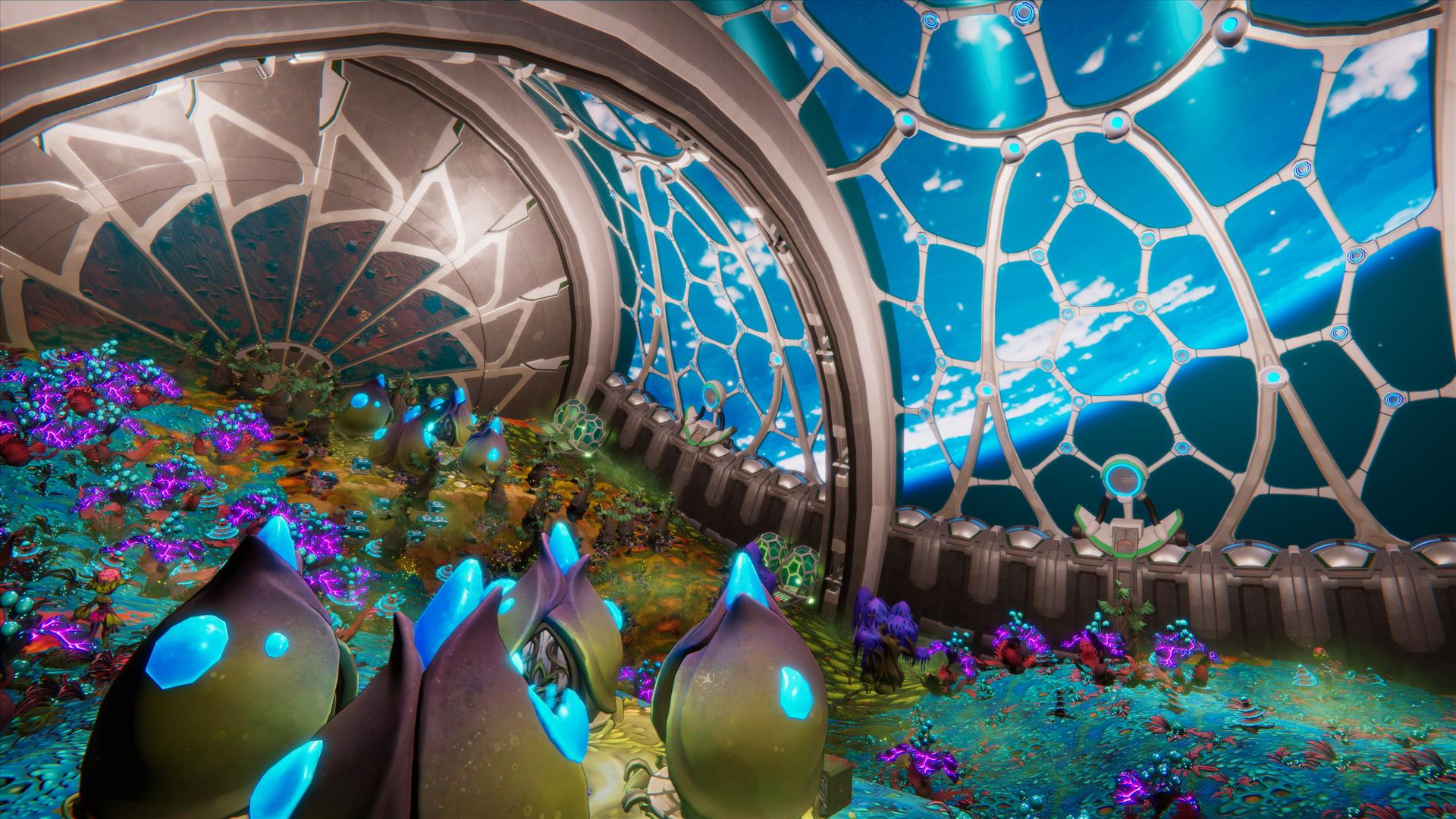 Of course, many of these features need to manned by staff, which must be hired to do stuff like run the recycling machine, or harvest the whoozits and whatzits you are growing on the biodeck. There are cop aliens to run the brig, doctor aliens to man the medical stations, and even disco aliens to keep things hopping on the dance floor. It’s up to the player to maintain proper staffing and make sure nothing on the station grinds to a halt.

Most of the game has the player flipping between the three decks, making small adjustments and dealing with the occasional catastrophe-in-the-making. In order to make this certain thing, you have to have that other thing, and in order to have that other thing, you have to grow this other-other thing. Often times, you follow the trail of stuff you need to the bottom, start something growing, and then work your way back up the chain until you have accomplished your goal. 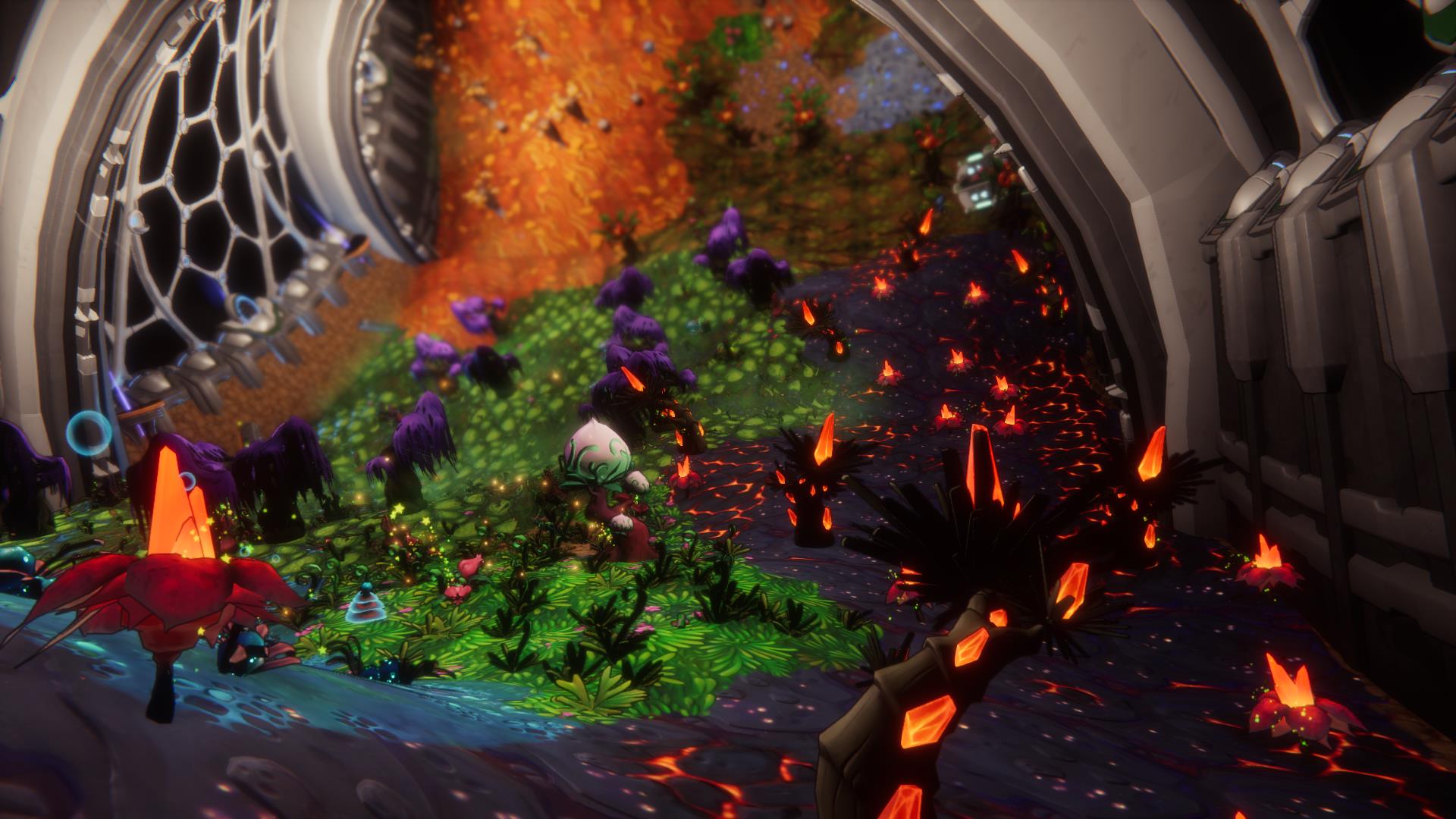 Although there is a lot going on at any given time in Spacebase Startopia, I never really felt overwhelmed. Though to be fair, I did play most of the game on the middle difficulty, so things might get a little hairier when you bump things up a notch. The biggest issue I had was simply waiting around for meters to fill up, which made me yearn for a speed setting to move things along. But of course, you can always spend your downtime picking up the endless flow of litter and squishing the tidal wave of vermin bugs that threaten to overrun your base, though both tasks are made far tougher than they should be by some seriously fiddly controls.

But for the most part, I was able to adapt to whatever the game threw at me for a few reasons: the reasonably good tutorial, and the game’s ceaseless good cheer. When I first sat down to play Spacebase Startopia, I jumped into the campaign and was horrified by the lack of a tutorial. I immediately started texting my colleagues, crying about yet another strategy game that refused to teach me how to play it. 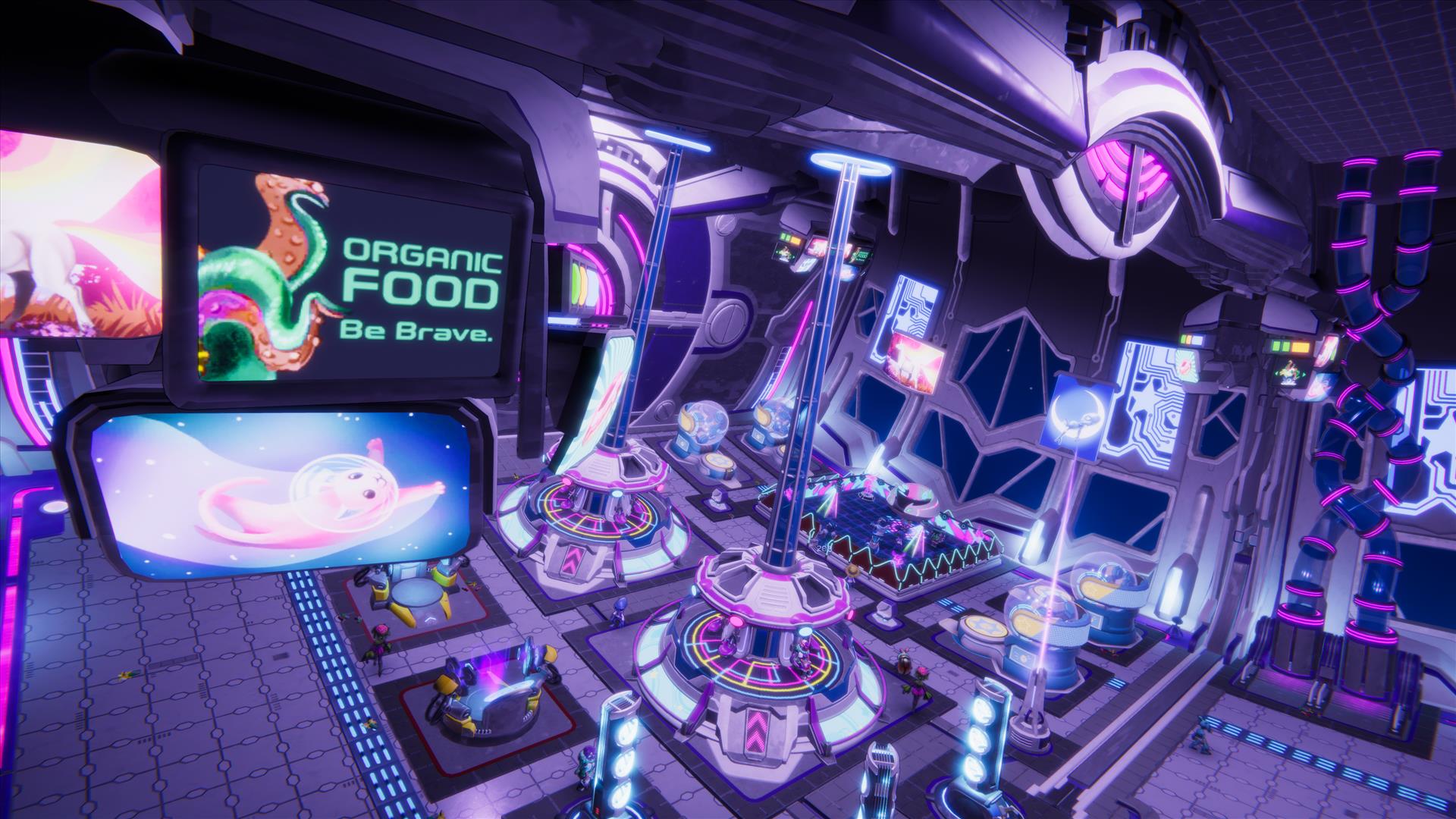 It turns out that I’m just a dummy. There is actually a nice tutorial included in the game that runs the player through several introductory missions; you simply access it from a separate menu option that I had completely missed. Of course, this tutorial doesn’t cover every single permutation of the fairly complicated control scheme, but it is enough to get you started, and I didn’t have much problem muddling through the rest.

I also enjoyed Val, the rather hateful AI assistant who accompanies players throughout the game, pointing out tasks that need to be accomplished while simultaneously slamming them in the face with brutal insults. Sure, the “rude robot” trope is pretty common in sci-fi games these days, but that doesn’t mean I didn’t enjoy some of Val’s zingers. She’s right—I do kinda suck at this. The rest of the game is equally cheery, from the disco dancing aliens, to the fuzzies zipping around picking up trash. There's always something fun to look at, and no shortage of interesting little stories playing out if you take the time to look at them. 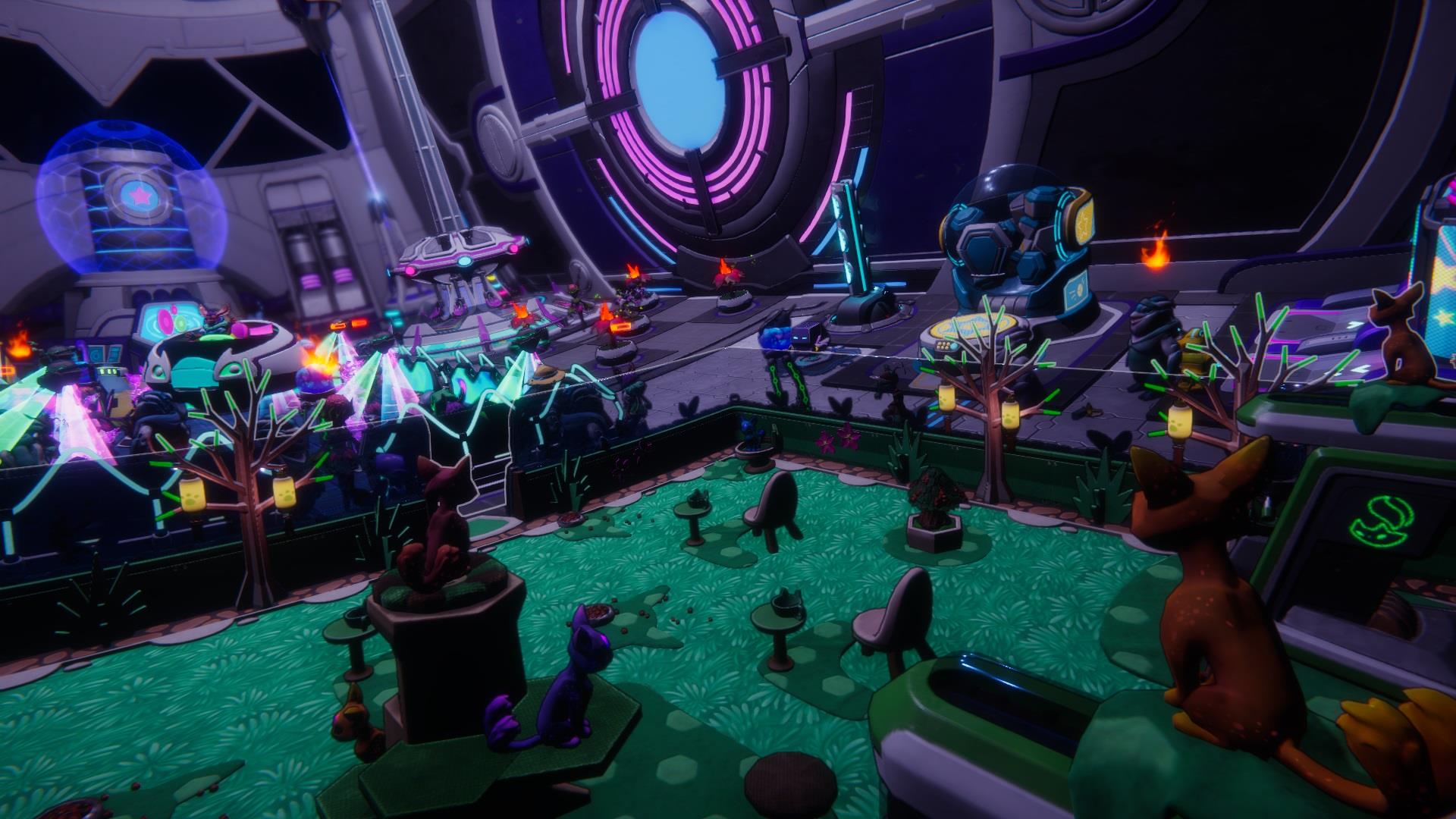 I played Spacebase Startopia on the PlayStation 5, and though the game looked spectacular, I couldn’t help but wish that I had a powerful enough PC to play it with a mouse and keyboard. Most of my frustrations with Spacebase Startopia stemmed from my inability to remember the intricate combination of button presses to properly navigate the game’s many menus, followed closely by my consternation with the floaty curser relentlessly drifting away from whatever I was trying to click on. A few other technical issues plague the game – music dropping out for no reason, or audio files playing over each other – but these will likely be resolved quickly with patches.

I enjoyed my time with Spacebase Startopia despite its quirks. Though I sometimes felt like I was wrestling with the controls, and I wished that I could speed things up a bit while waiting for resources, the game’s good cheer and interesting scenarios helped gloss over some of those issues. There’s a dearth of strategy games on the PS5 right now, so if you have been craving a bit of alien micromanagement, Spacebase Startopia might just be the space station sim you are looking for.