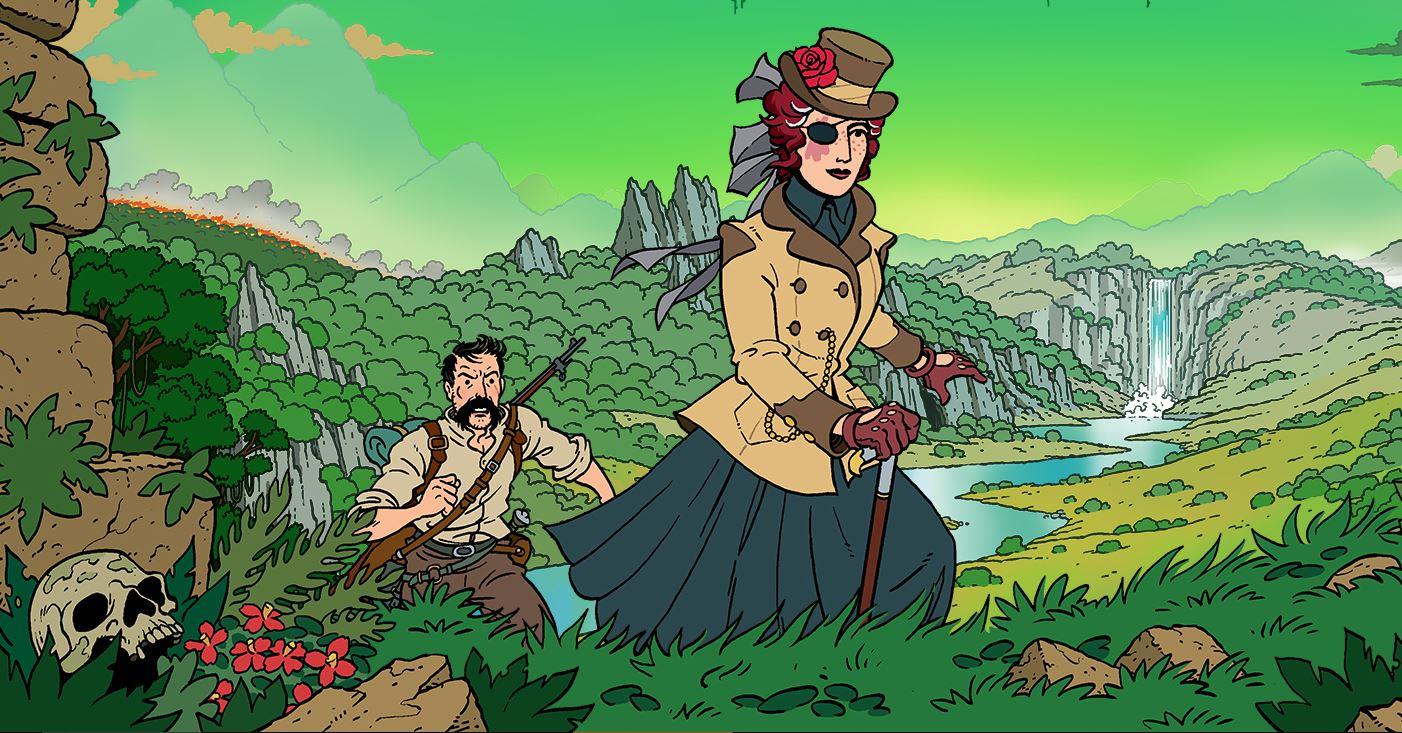 Written by Elliot Hilderbrand on 3/25/2021 for PC
More On: Curious Expedition 2

It’s 1886 in Paris, and you are put in charge of recruiting the next great exploration team while going up against the likes of Jules Verne or Annie Oakley. All the world’s greatest explorer societies (which is just three in case you wanted to know) want to show off the latest found treasures and are willing to fund just about anyone who can scrounge up a team from the local pub to do so. Lucky for you they also happen to be stationed in Paris. Find treasure, seek fame and fortune, discover the secrets of this world, or die trying. Thus begins Curious Expedition 2, an exploration roguelike with plenty of management, occasional combat, and a terrible supporting cast. In a sea of ever-evolving roguelikes, this one doesn’t wander far enough off the beaten path. 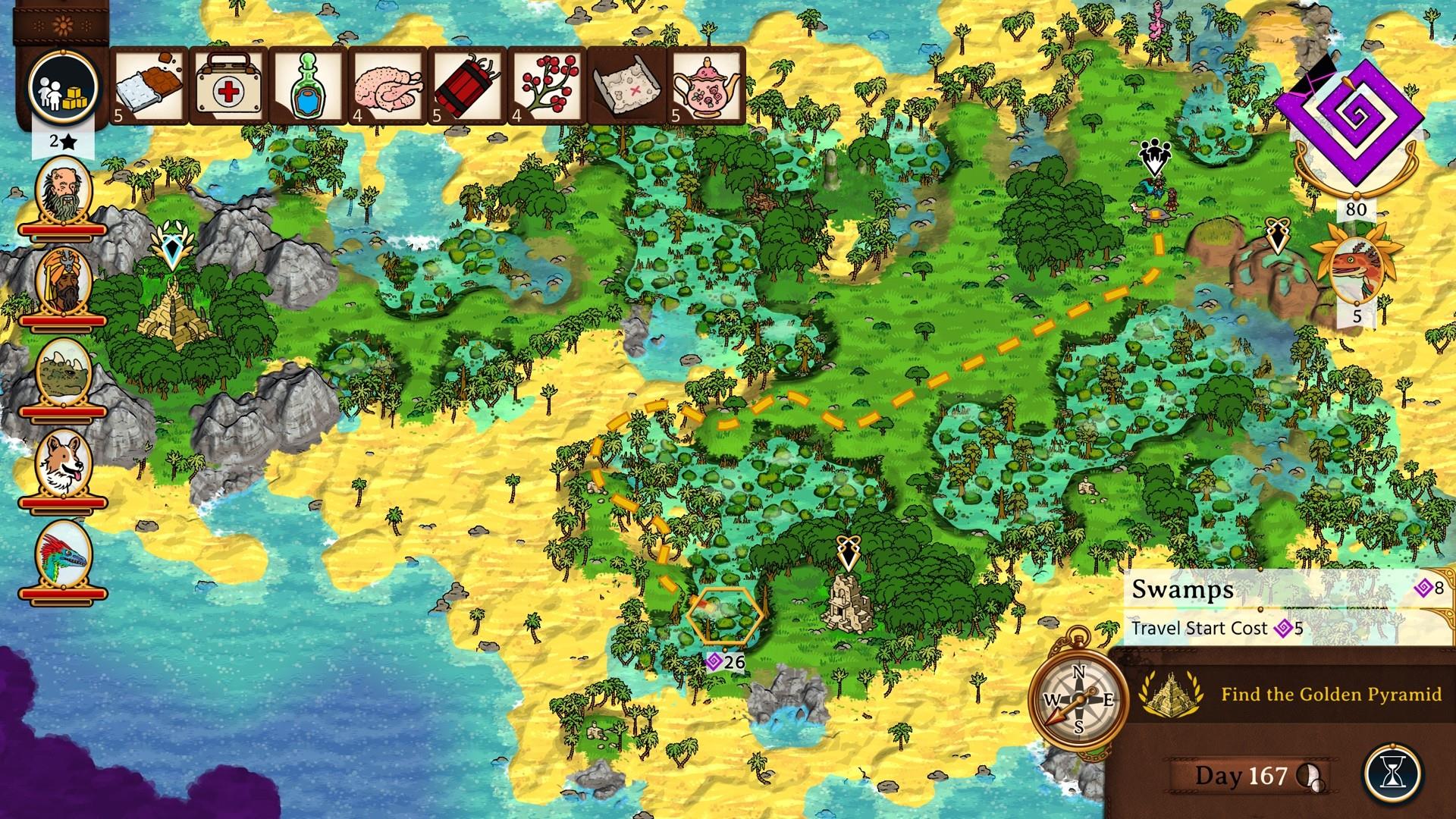 Everything done in Curious Expedition 2 is cyclical. You start by recruiting for the upcoming expedition. Sure, you don’t know what the mission is yet or where you’re going, but you need a team to do it! This is done by visiting Boussole Cassee, where you can hire cooks, sailors, or even man’s four-legged best friends to help aid you on expeditions. Characters can stay with you until any number of events remove them; you trade them out, they die, or suffer low morale. Party members can even leave you in the middle of a random island, after stealing what they feel like from you.

From there you go to actually pick your mission from a few choices, each with varying difficulty. You also pick which of the three explorer’s leagues will fund the current mission. Lux Labs is run by EdiBot, a robot made to look exactly like Thomas Edison; The Taishi Academy want to further knowledge to all (the Airbenders of this world); and The Royal Avalon Society, the most esteemed, and best dressed, of the three. 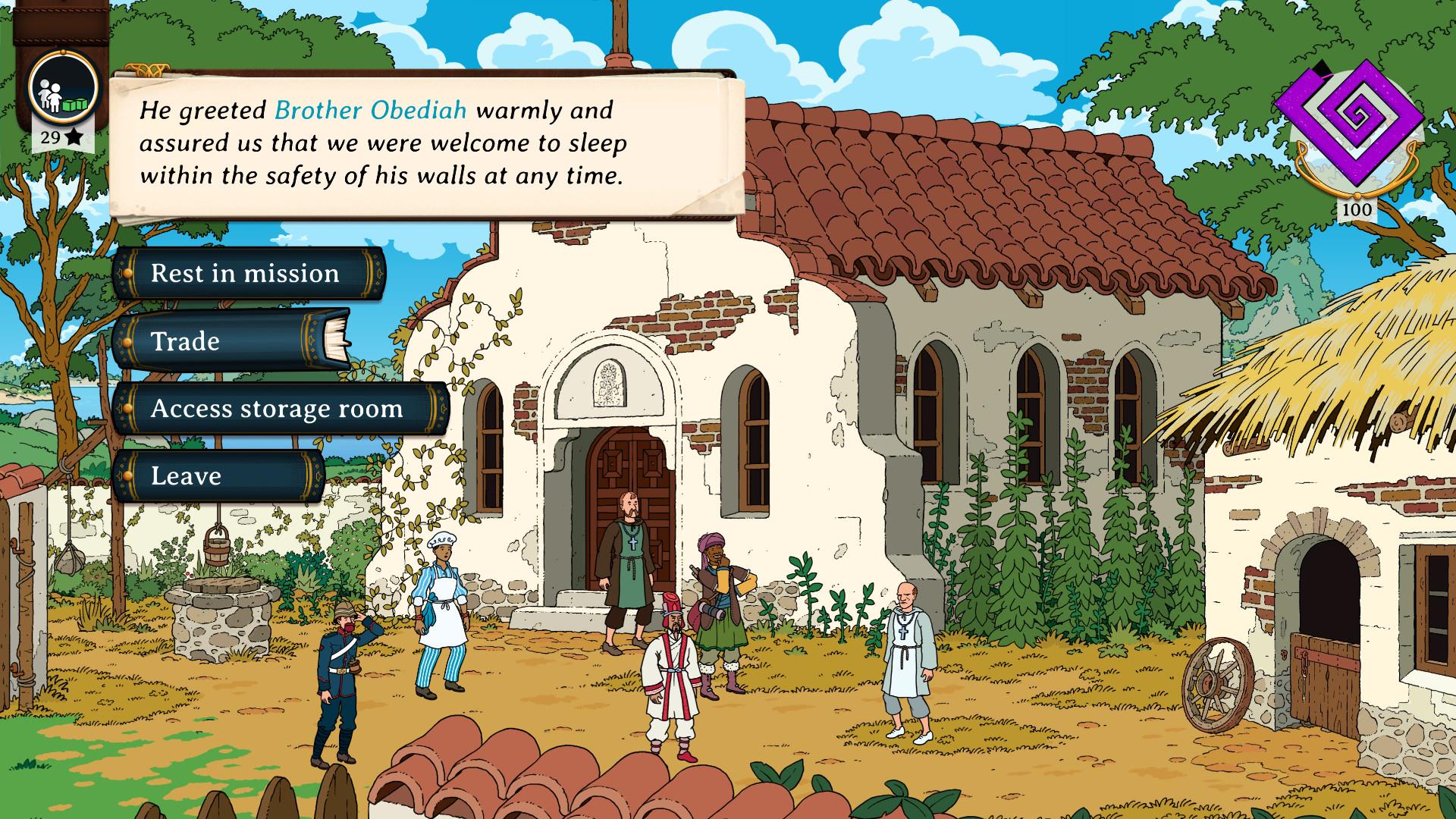 From there you purchase supplies, refill your water skin and are off to fame and fortune! Or perhaps death, it gets a little fuzzy. The management part of the game is enjoyable, the first handful of times. The management never feels overwhelming, but quickly grows to become less enjoyable after doing it before every expedition. Once an expedition is complete you turn your supplies back in for bonuses, and so are constantly rebuying equipment before each new expedition, which becomes a chore. I already bought a shovel last time, why do I have to buy it again?

The main gameplay of Curious Expedition 2 is a roguelike hex crawl. Once you land on your island you are tasked with some type of mission—meet the natives, find the temple, or just general surveying. Maps and missions can be simple and easy to complete, but at times can be downright unfair. Go the opposite direction from where you landed at, survey something, then go completely back. Plenty of random events can take place in between the main jobs that allow for all sorts of misadventures: wiped out supplies, poison party members, random combat with a tiger. 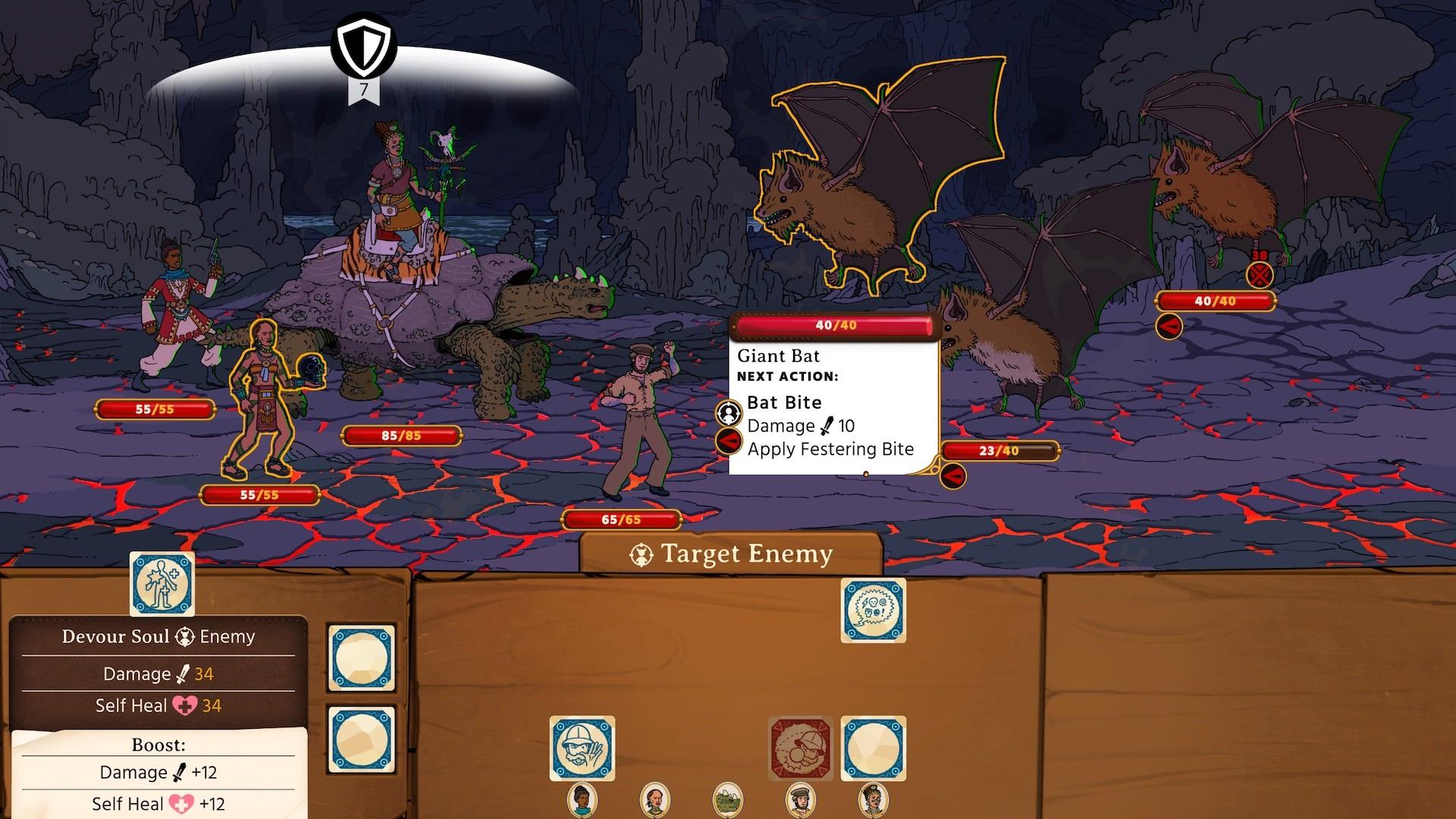 Occasionally combat enters the fray, and here it’s a standard turn-based affair. You roll the dice for your side, plug in what attack, spell or buff you want each member to do, wash and repeat until one side is downed. The dice mechanic left a bad taste in my mouth. Virtual dice rolling is never exciting for me, and even less so in Curious Expedition 2. I felt early game combat was a breeze, while in the late game combat feels stacked against you. This is when choosing your party members can really matter.

For example, the problem with recruitment is that it matters who you pick—and doesn’t at the same time. Party members have a set number of colored dice, red, blue, and green. The cook may have more greens, the dog more blues. When it comes to combat, or rolling to see if you’re able to sneak through the temple to snag up the golden goose, you need to roll several dice and have enough of certain colors come up. The difference between one member to the next doesn’t feel great enough to really matter too much. It truly feels like the luck of the die. 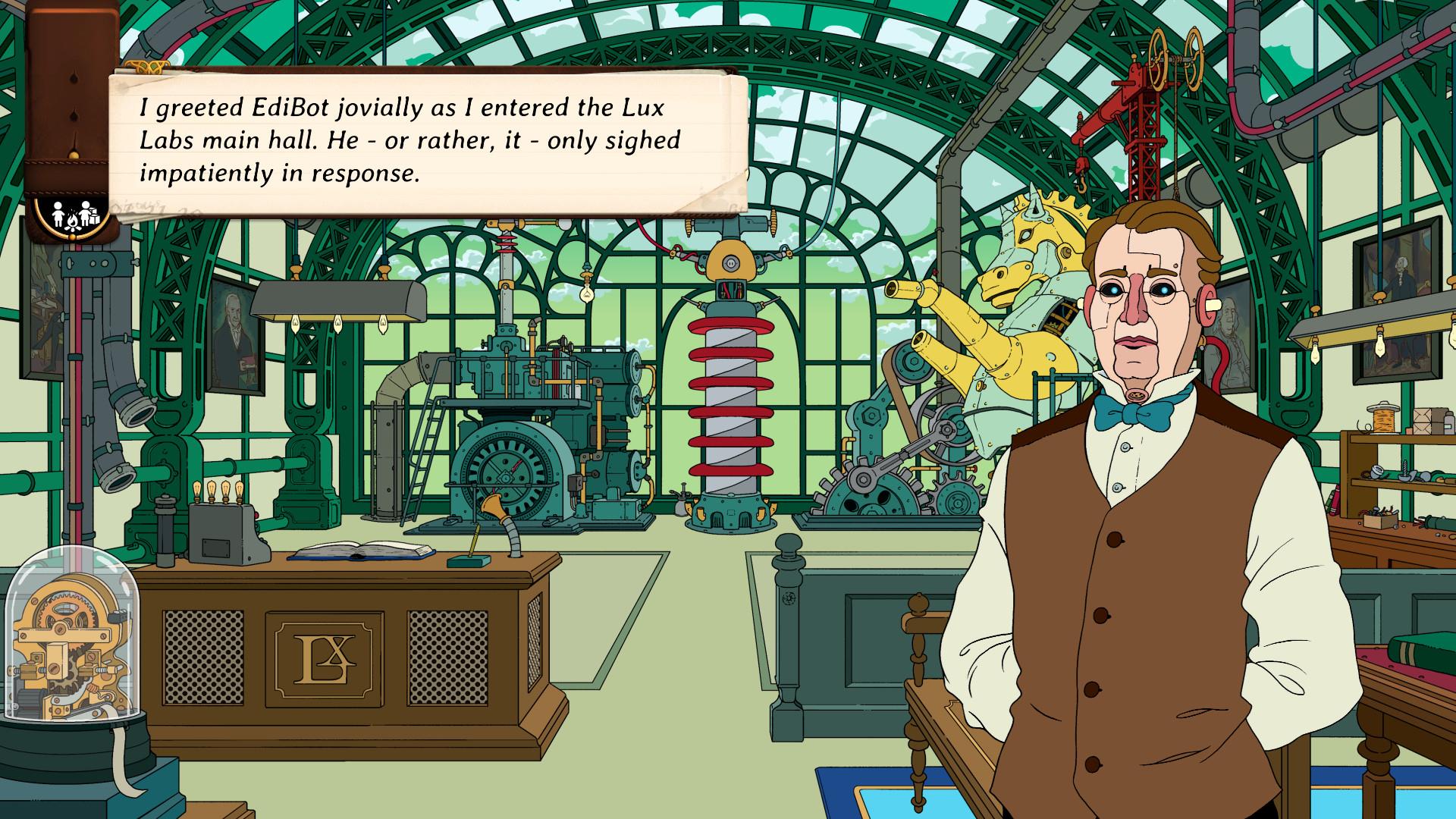 While you travel the hex map you also begin to lose sanity. Each day you lose a little, the goal being to complete the current expedition before you run out. There are numerous ways to regain sanity. Eat some chocolate, or spend a week with the locals. Early on it’s a mechanic you can ignore, while later in the game it becomes vital to keeping your party together.

Finishing the expedition on the current island sends you back to Paris instantly, no need to make a treacherous trek back to the boat. You’ll turn in your findings and equipment to the society, who will reward you with...fair tickets! Yes, the currency in the game is the 1889 Paris World’s Fair tickets, which allow you to buy from vendors or the explorer societies that offer weapons and upgrades, among other amenities. Instead of risking my life for some tickets maybe I could just like work at the local coffee shop or something? 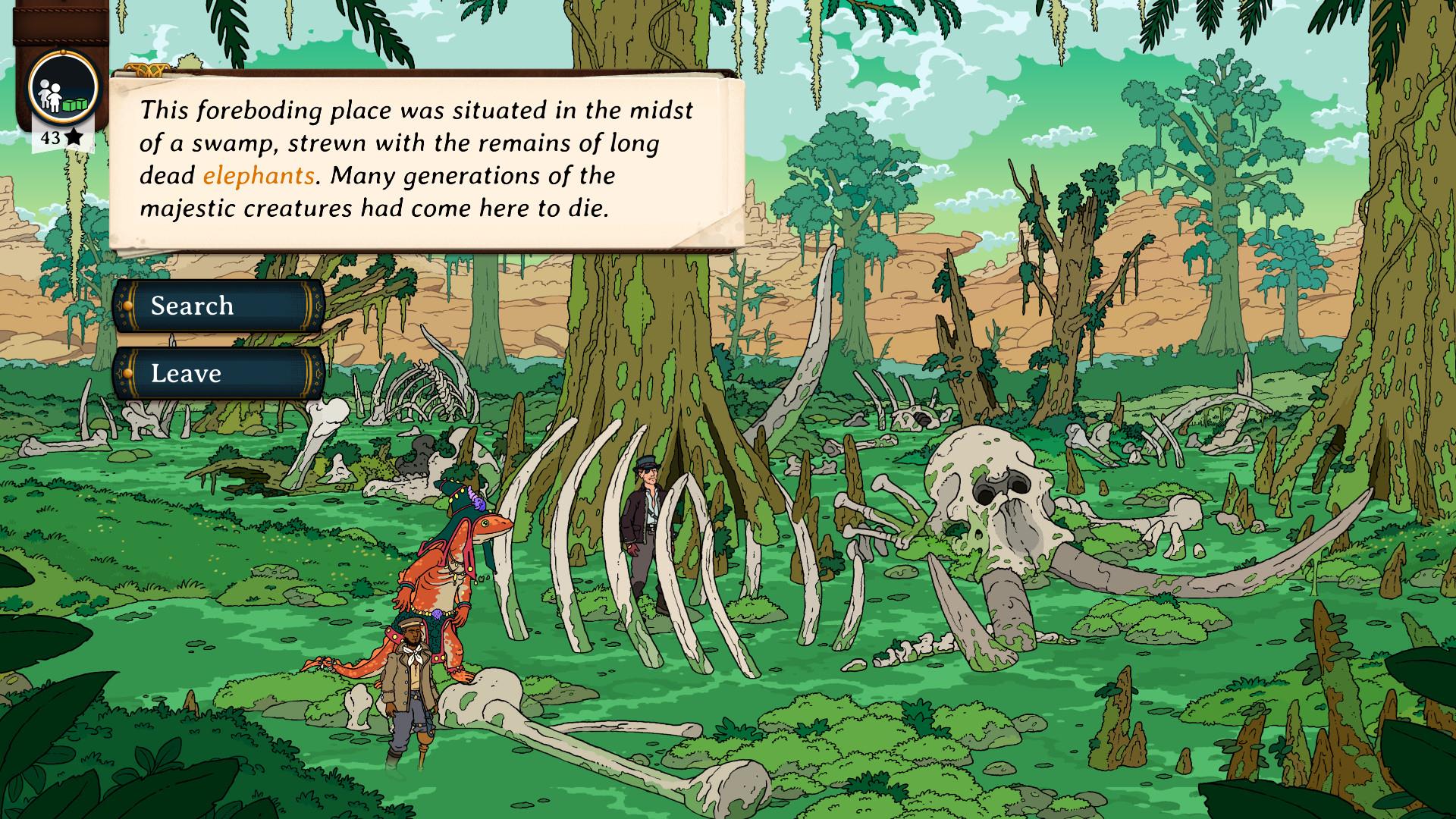 The overall problem with gameplay lies with the difficulty spike. You have three modes to choose from when starting out: traveler, adventurer, lunatic. Each allows you to change the difficulty even more by choosing to only restart an expedition when things go sour, wipe out the entire year of game time, or just simply erase your entire campaign. Early missions are no problem, but at some point the difficulty spikes without warning and it quickly becomes a Hunger Games-style survival mission. I felt like Curious Expedition 2 was too easy, and then it wasn’t. The dice make everything random. Sometimes you loot a temple because you rolled well, other times you get dysentery.

Visually, this game has two different stories to tell. The backgrounds are fantastic. The art is hand drawn and the quality is easy to see. When starting on a new expedition I look forward to seeing the new setting. Even the hex map you traverse is full of details to discover. The characters in the game also look great, but when animated look lifeless. The way their legs and arms move doesn’t seem fluid enough when compared to the colorful backgrounds they are placed upon, which detracts a bit from the visual quality. Watching a turn-based fight play out does nothing for me. 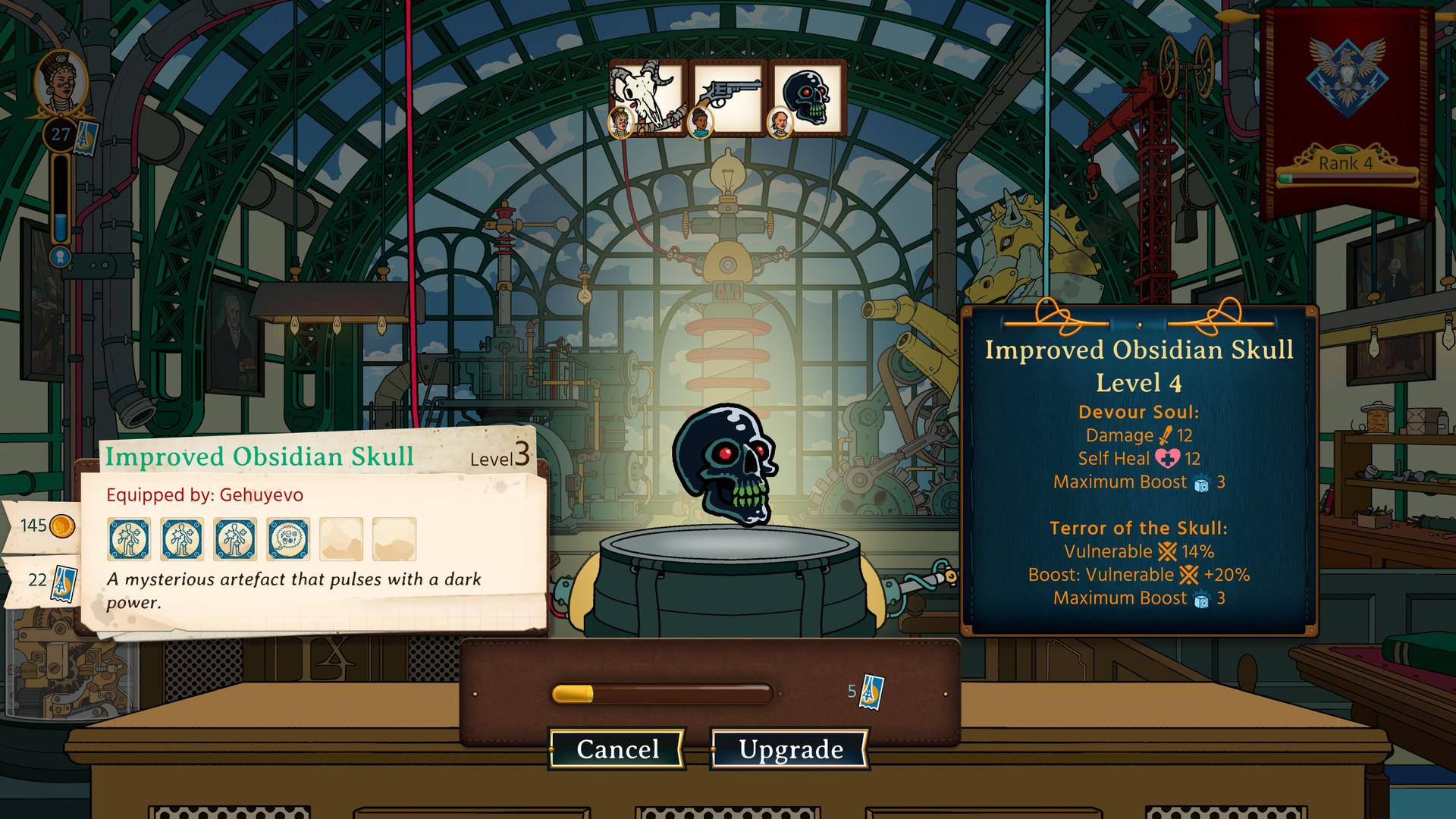 Not only do characters look dull when walking or in combat, they also feel dull while playing. Party members don’t often last long before something dire befalls them. No one is really given a personality; the game relies on their unique look to be enough. The same goes for NPCs you encounter as well. Just about any encounter has little to no meaning in the grand scheme of the story. Party member death or upsetting a village has no real significance. The same can be said for the music. The title screen theme is catchy, but in-game music is easily forgettable.

Curious Expedition 2 is visually beautiful and starts out strong. Over time the gameplay cycle becomes monotonous as party members leave, rewards for expeditions become less useful, and a spike in difficulty makes the dice mechanics unpredictable in a frustrating way. Veterans of the roguelike genre will have plenty to keep them busy here, while players new to the genre might look elsewhere to get their first taste.

Curious Expedition 2's gorgeous backgrounds and good-looking characters improve on the first title, but don't do enough to make the management part of the game sparkle. Expeditions become a trudge, especially when your party robs you of all your alcohol; and combat can be fun, but not much fun to look at.