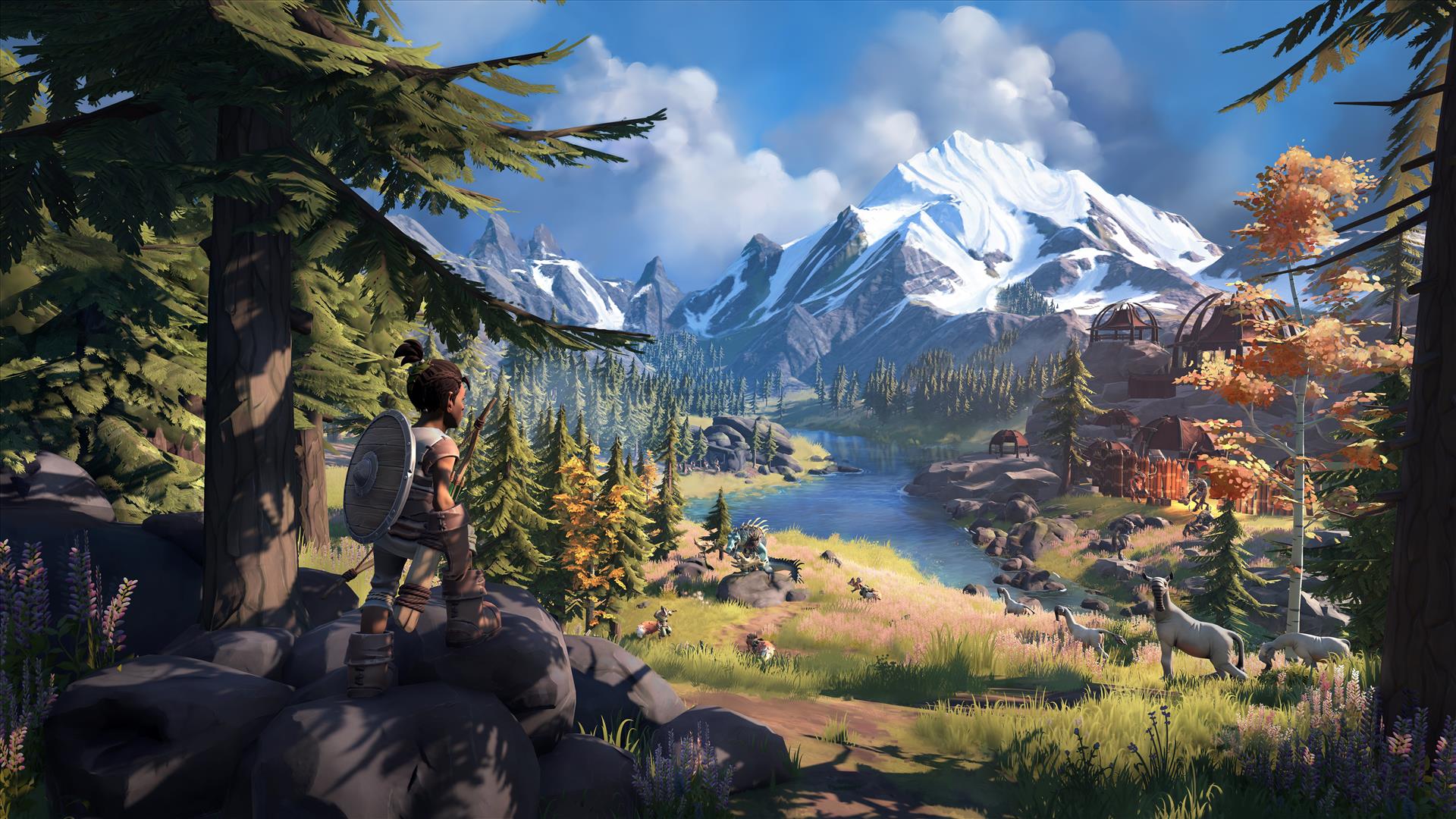 Pine is a game full of wonderful ideas that are implemented moderately well. But that said, a chef can make a delicious soup and some amazing brownies. But when you mix those two items together, you don’t necessarily have the makings of a good meal. Not every great taste tastes great together.

On paper, Pine seems like an absolute winner. Pine’s small open world contains five separate cultures, and as the main character, Hue, players must establish and maintain relationships with each of those – even though they don’t all get along, and often clash. Pine has an interesting crafting system, ranged and melee combat, and rewarding exploration. But the way these pieces fit together makes for a somewhat crooked puzzle, resulting in a game this is interesting to consider, but not terribly fun to play. There is nothing eye-rollingly bad in Pine, but there was also nothing really driving me forward to the next goal. 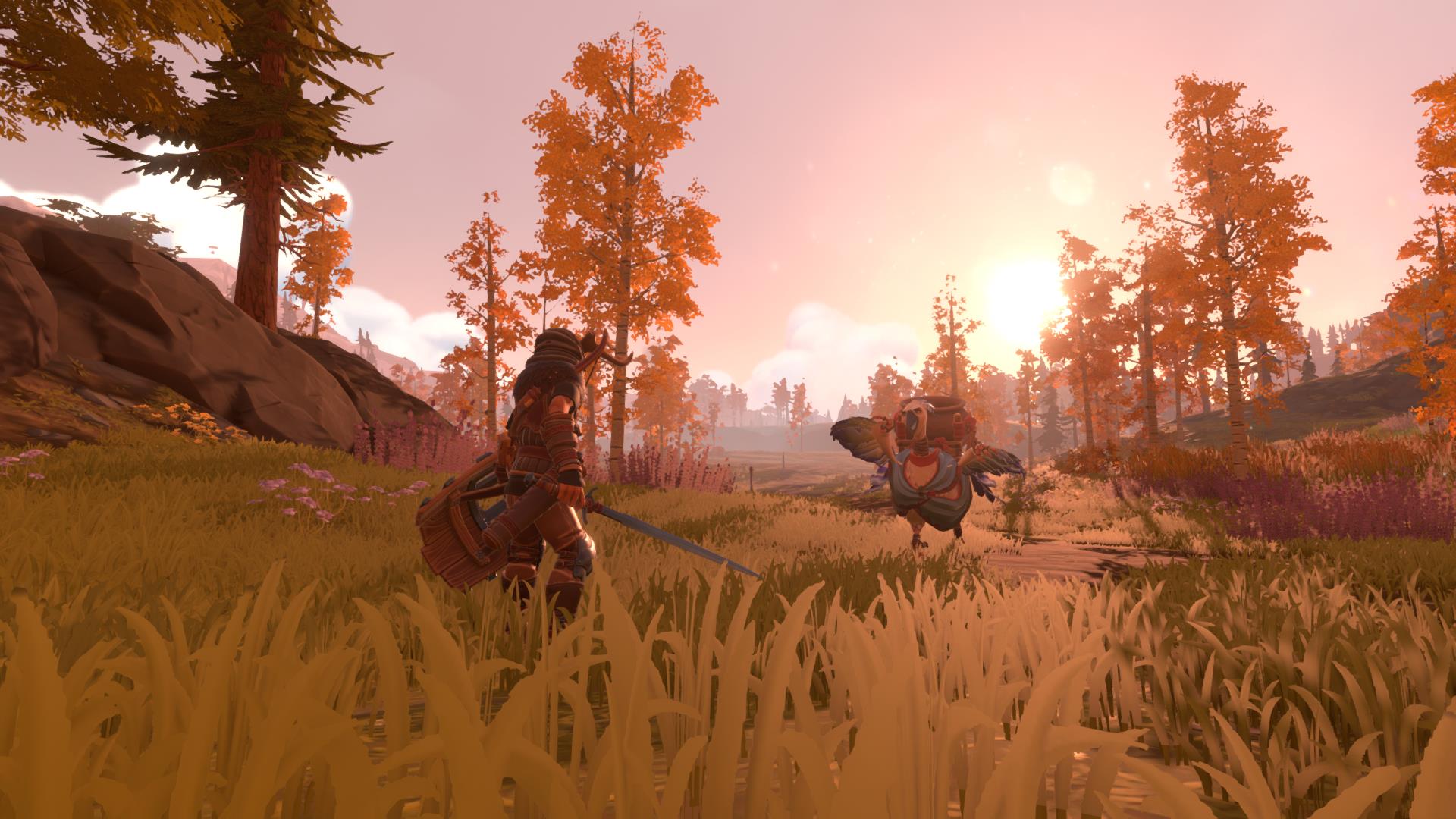 Hue starts the game living among his family and friends in a small village perched at the top of a cliff. This is an insular culture, and young people are regularly warned against exploring too far from home, which has everything the people need to survive. But then disaster strikes, and it becomes clear that the villagers can no longer stay in their unstable home. Hue ventures into the “Out,” determined to find a more suitable place for his people to settle.

As he makes his way into the world, Hue comes across various resources: logs, flowers, minerals, and the like. A quick hold on the “X” button, and he scoops them into his pack and is on his way. Before long, Hue discovers a small encampment of lizard-like people, who appear to be traders. Unfortunately, these folks attack on sight, and Hue is woefully unprepared to deal with them. But by dropping a bunch of his collected items into a nearby donation box, Hue can influence this culture first to neutrality, and then to friendliness. Unfortunately, this uses up most of the stuff Hue has collected, leaving his sack of materials looking pretty light. 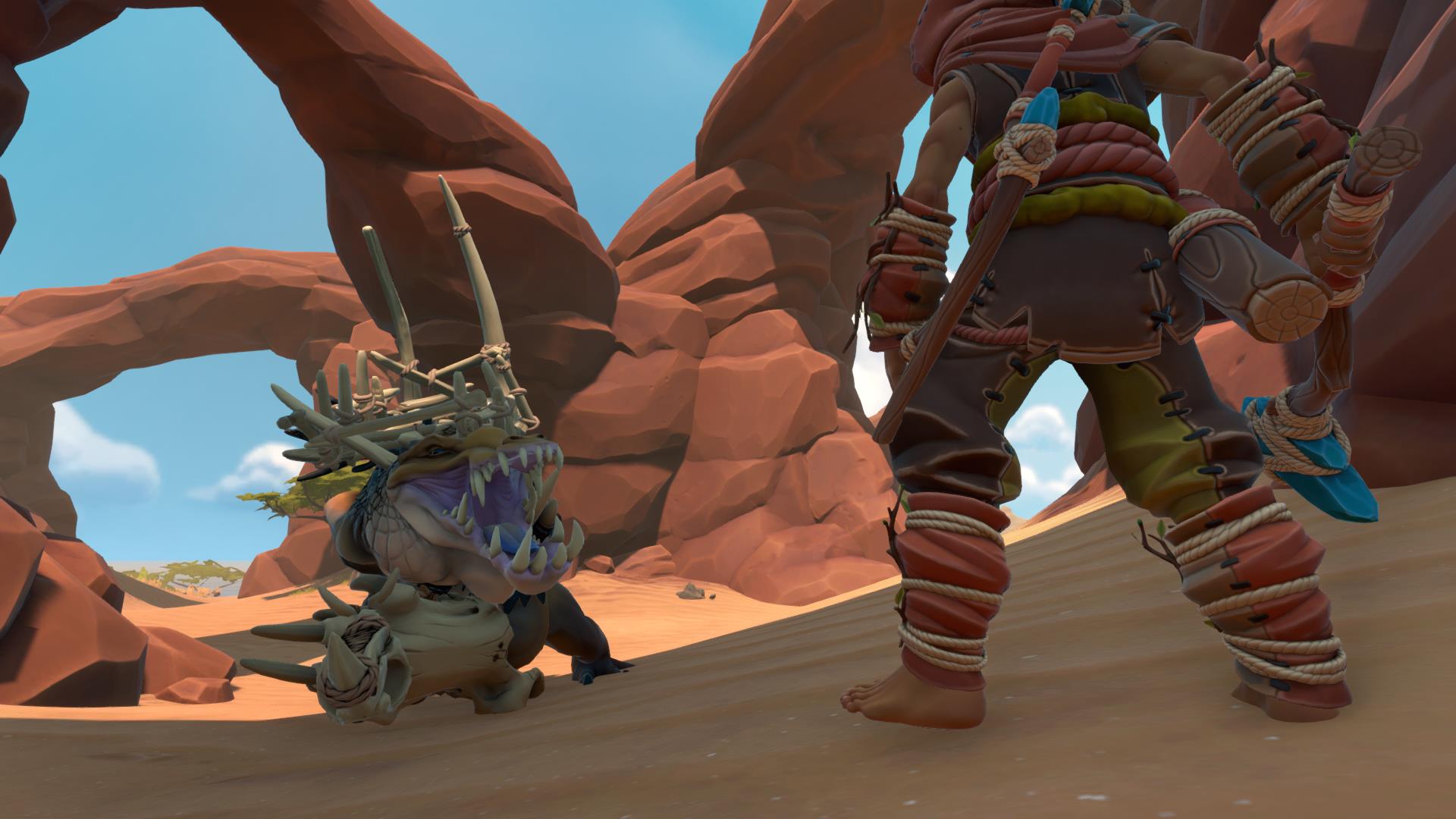 By wandering into the encampment (I hesitate to call it a village), Hue is able to chat up the lizard-people’s chief, who wants him to go and make contact with other cultures. Hue can also trade with the local goods booth for materials and crafting recipes – which further depletes his store of stuff.

This is where Pine started to fall apart for me. Hue only has so many items. The materials are found laying around, but they aren’t exactly abundant. By the time he gets recipes, he is pretty much out of materials, depending on how much time the player spent picking stuff up along the way. That would fine, if he can just retrace his steps and pick up what he needs to craft the armor and weapon upgrade recipes he now has. But these recipes call for materials that the player has never seen before. And right out of the gate, players are in an easter egg hunt for a laundry list of stuff that Hue needs if he wants to survive for more than a few seconds in combat – which is unreasonably difficult. 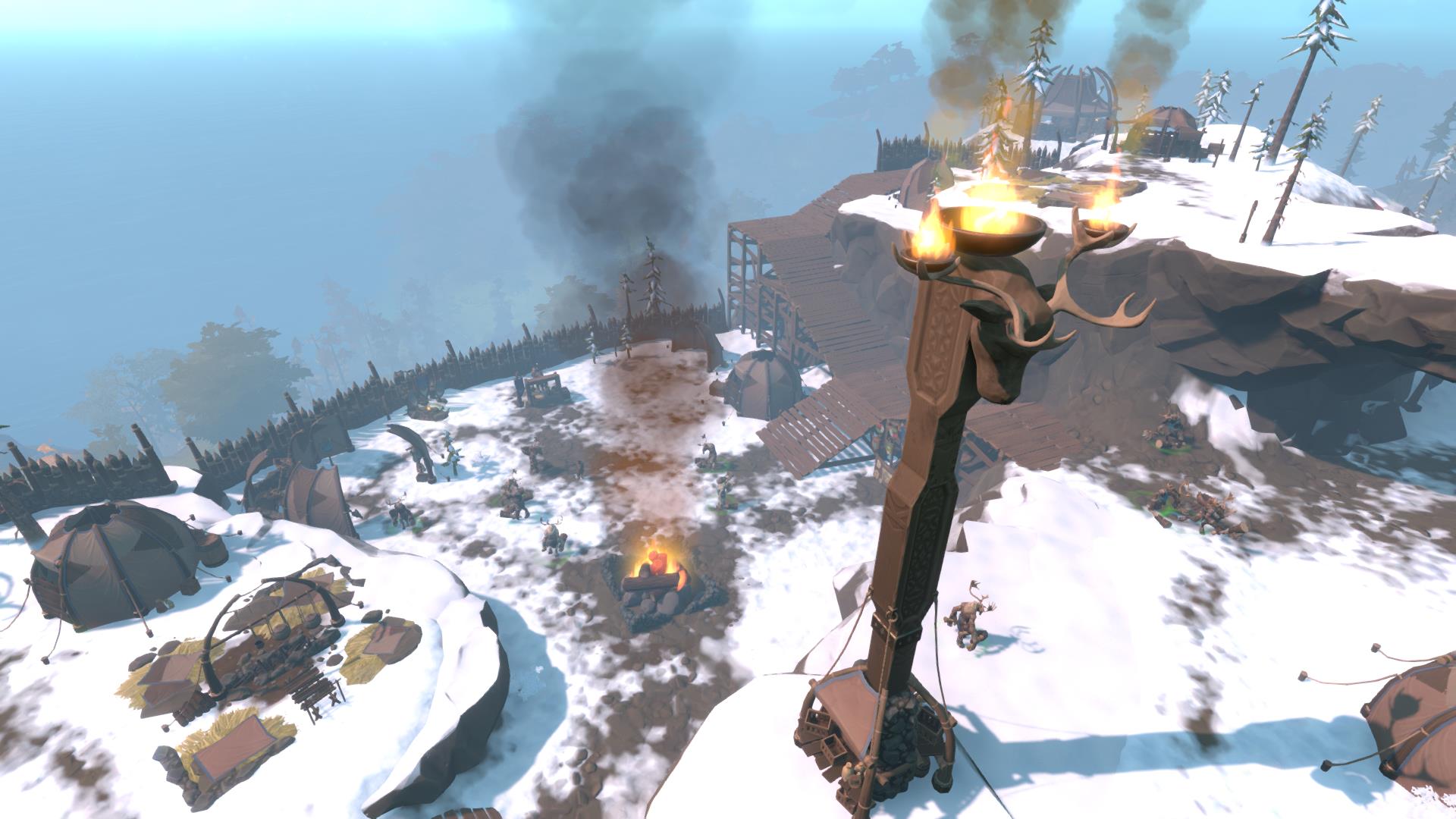 This dynamic may be interpreted as a way for Pine to push Hue out into the world to explore, but I started getting irritated when two hours later, I still hadn’t found the stuff I needed for the first upgrade. To make matters worse, each time Hue comes across a new culture, he has to go through the whole “donation box” routine again. This depletes his store of goods, which is incredibly dicey when the player knows full well that they will soon be purchasing even more recipes from a new vendor, with no knowledge of what materials those recipes could require.

This led to a dynamic where I was taking Hue out on extended wandering expeditions, with no destination in mind, just meandering around looking for stuff on the ground. Of course, Hue has very limited bag space in the beginning of the game, and the only way to unlock more space is to gather certain crystals, which can be found primarily in villages, which require more materials to enter. And did I mention that whenever you push your faction rating up in one village, it goes down in others, necessitating even further expenditure of your materials? 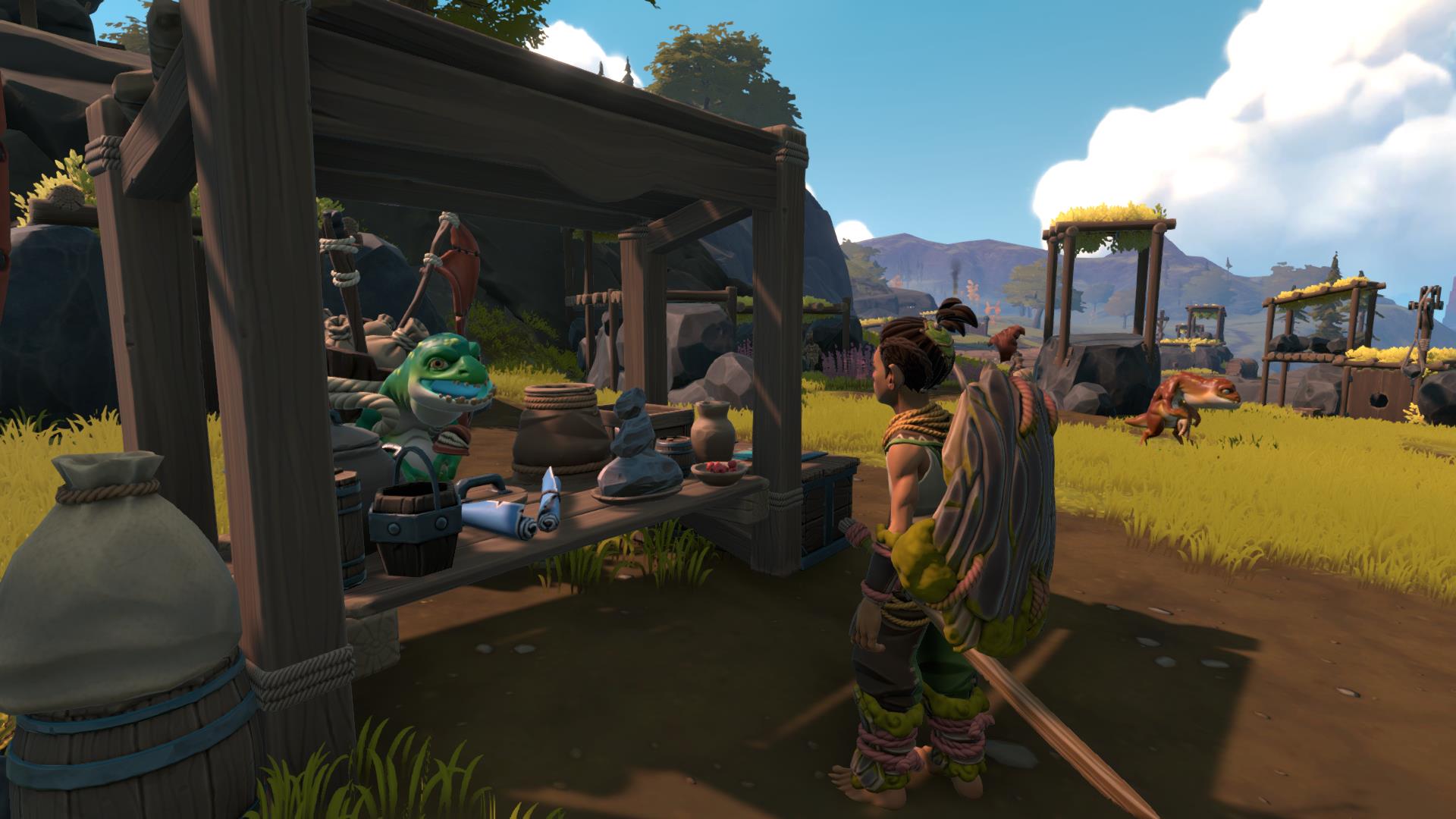 Pine doesn’t seem to want to give new players a break. The diplomacy system seems to be fine, and the crafting system works okay. But when both of these systems rely on the same materials to work, the game gets bogged down, forcing the player to poke around for wheat and crystals far too often.

The rest of Pine is a bit of a mixed bag. For every “good puzzles” there is an “unclear map.” The combat never really gels into anything that I was interested in engaging with, leaving me only going to battle when I absolutely could not avoid it. There is some fun to be had once the diplomacy mechanic gears up into full swing; I enjoyed leading hostile creatures into the camps of more friendly cultures, and watching the camp rally to my rescue. And the push and pull of the various civilizations is kinda neat – particularly the way you can help one out to the detriment of its neighbors.

But taken as a whole, Pine feels like a recipe gone awry. It is possible to not make any major mistakes, and still end up with a product that doesn’t quite work. Pine was made with a team of seven people, with funding from a successful Kickstarter. And the mission was accomplished. Every single point in that fascinating Kickstarter campaign is present in Pine. This is a team that delivered exactly what was promised – a relative rarity in Kickstarter terms. For all of its flaws, Pine does not lack in ambition. While I cannot give it a full recommendation, nothing in Pine is outright offensive. I imagine that there are plenty of players out there with forgiving hearts that will find something to enjoy in this game.

Pine has a lot of interesting systems and mechanics, but those individual pieces do not add up to a completely satisfying whole. While there is fun to be had with Pine's interesting exploration, many of the mechanics feel disjointed, with too much reliance on the game's collection-based economy. While Pine was clearly made with a lot of love, every good feature in is balanced by a mechanic that doesn't feel so great.