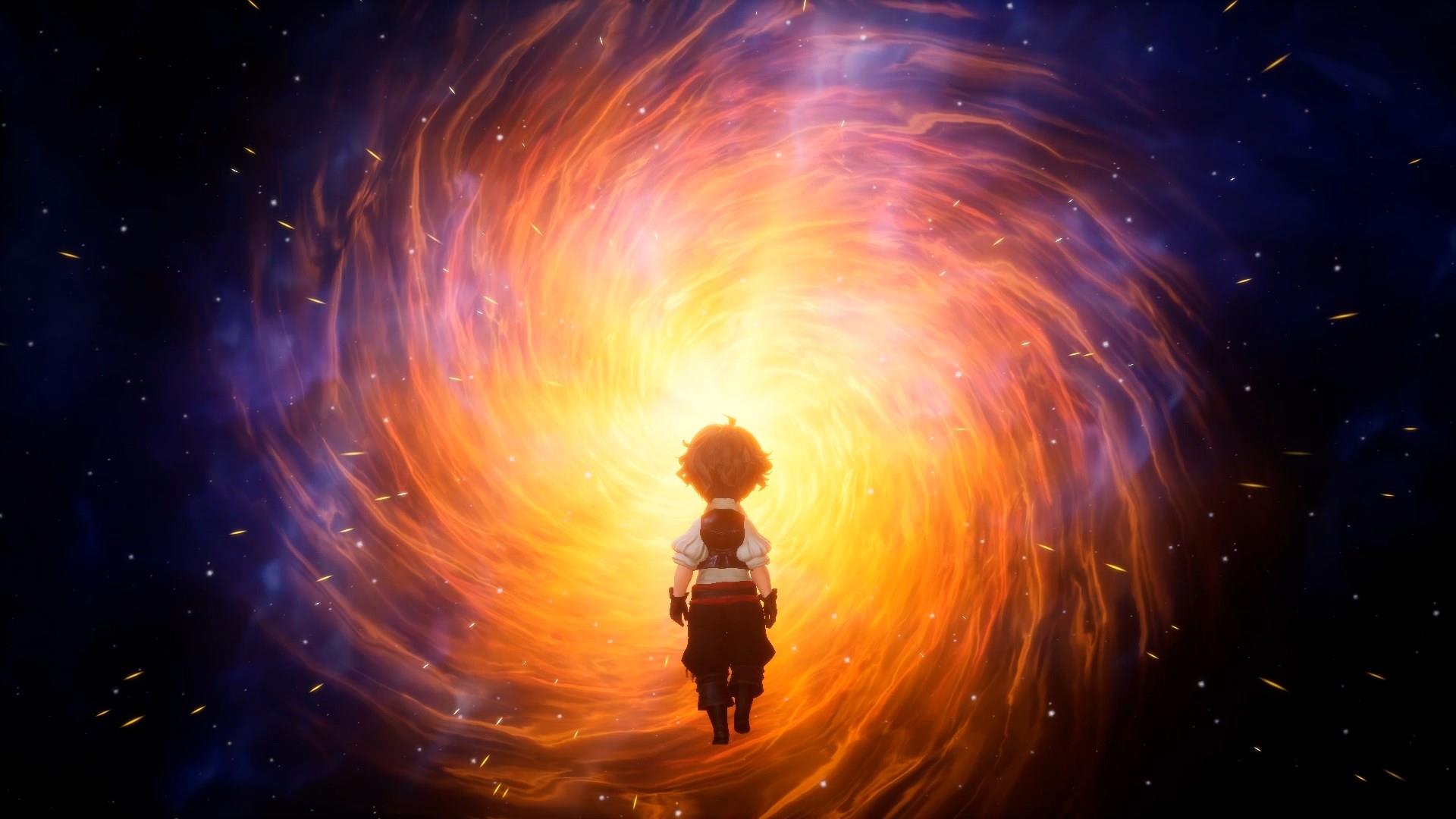 Written by Eric Hauter on 3/8/2021 for SWI
More On: Bravely Default II

There is a certain subset of gamers that look at modern role-playing games and wonder what the heck happened. For people of a certain age – those that came up playing Dragon Quest III on NES and Final Fantasy VI on SNES, spending hours running in circles to grind Cloud and the gang to level 99 in FFVII – the release of Final Fantasy X on PS2 marked the last point before major RPG releases evolved past the genre we grew up with, and became…something else.

I’m not shaking my fist at modern RPGs like a curmudgeonly old man, I’m just pointing out that for people that are hungry for a new big-budget adventure in the classic '80s style, there aren’t a ton of options out there. The modern gaming landscape has spawned hundreds of RPG categories; roguelite dungeon crawlers, open-world epics with a thousand quest lines, loot-driven action RPGs with skill trees that go for miles in every direction. 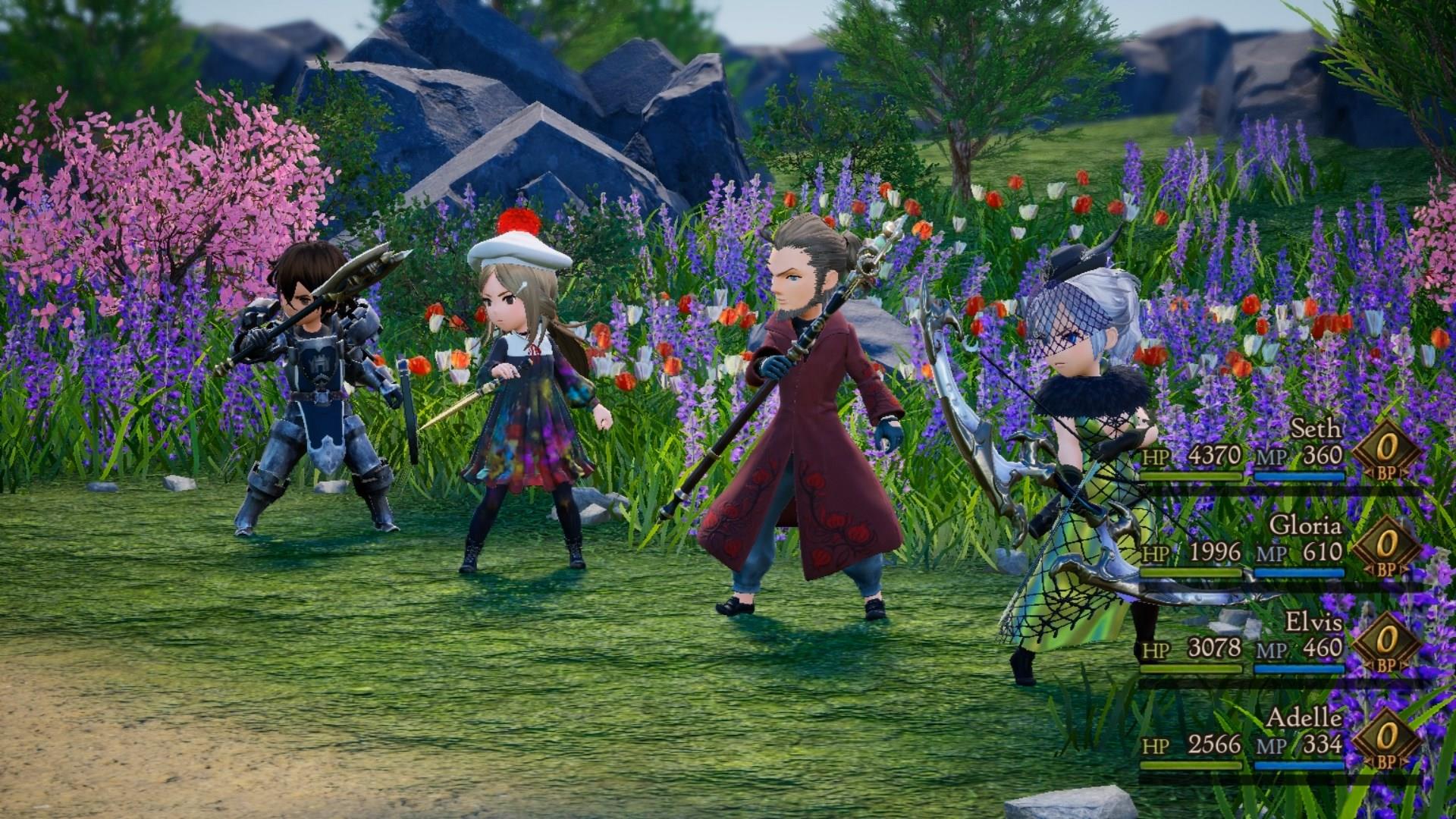 And yes, I love them all. But I have a particular itch that rarely gets scratched, a nagging need for games where I control a party of three or four, each of whom has scores of skills and abilities, all of which I ignore to just button mash X through every fight. Attack. Attack. Attack. Attack. The monsters fall, the numbers go up, and I lapse into a happy trance, cycling through my attack-happy battles and the occasional spamming of potions to recover my hit points. And every few hours, I decide that I’ve had enough grinding, and head off to stomp the next boss.

For gamers like me, that love the Skyrims, the Diablos, and yes, the modern Final Fantasies – but still miss the RPG days of old  – Square Enix created the Bravely Default series. Don’t get it twisted by reading reviews written by gamers that call Bravely Default “grind-y” or “old fashioned.” This is precisely what players like me want. This is the good stuff we’ve been waiting for. 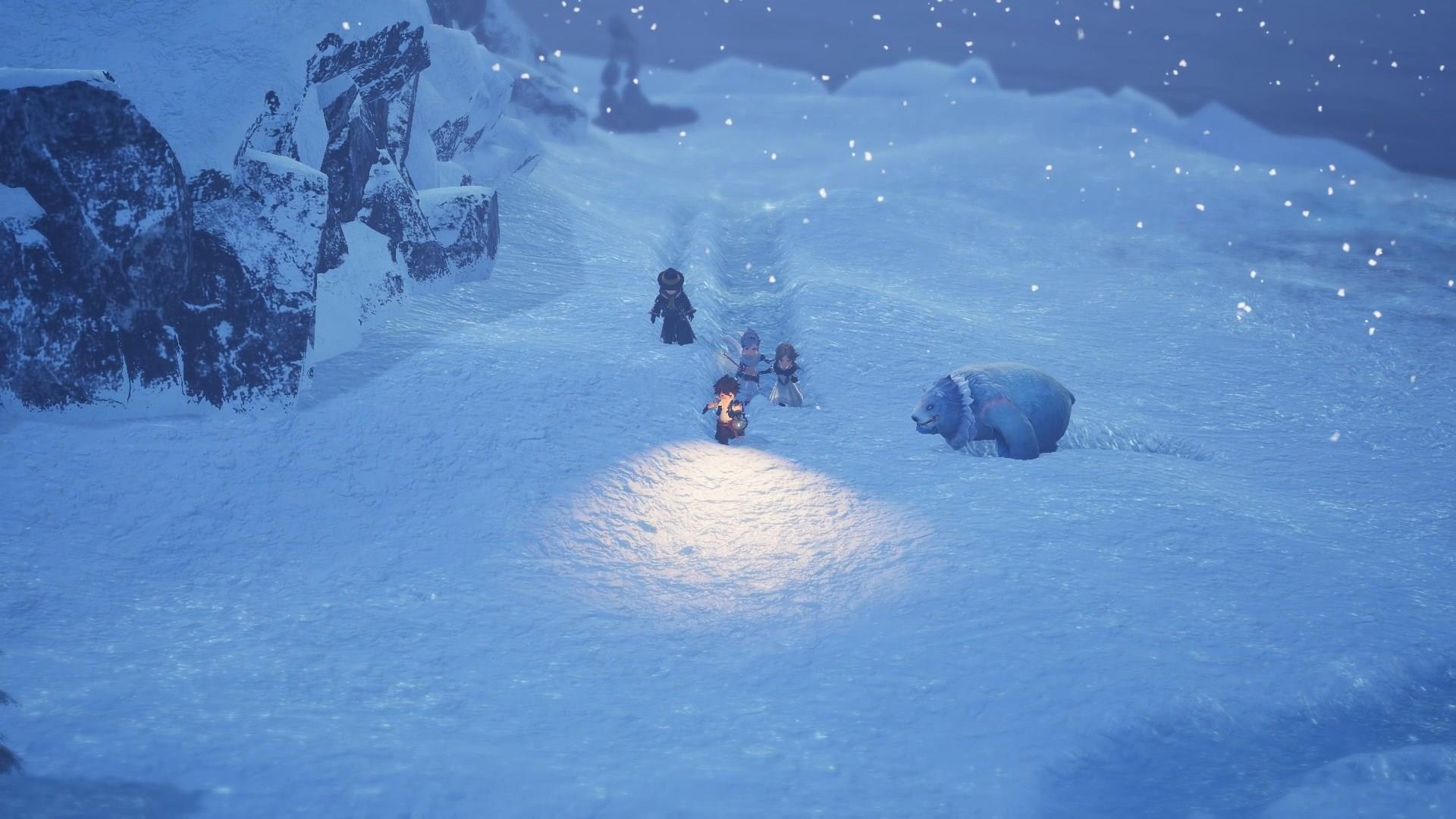 Bravely Default is for those of us that think game developers “just don’t make them like they used to.” Fans of old-school Final Fantasy games will slide into this series like a warm bath. First appearing on the 3DS in 2012, the original Bravely Default was an old-school Final Fantasy game in everything but name. And after a six-year absence (following the second game, 2015’s Bravely Second), the franchise returns to wash players in the golden light of classic RPG goodness once again.

Although it is now on a new system with updated, higher-res visuals, Bravely Default II doesn’t stray very far from the formula that made the first games so pleasurable. In fact, if you squinted, you could be forgiven for thinking that this was indeed one of those two previous games, despite the fact that you are now playing on a large television instead of a tiny four-inch screen. 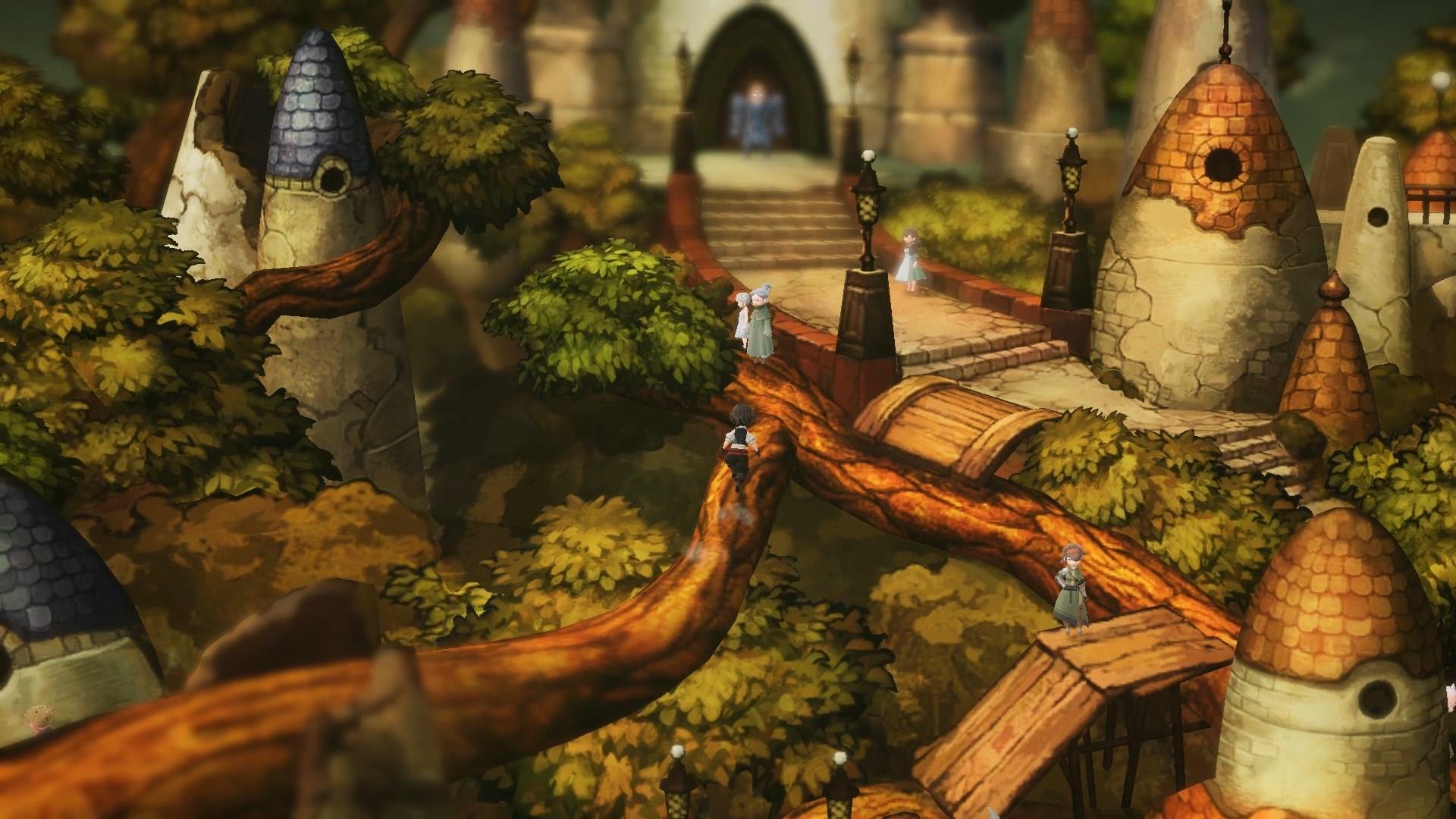 Bravely Default II continues with the unique battle system established in the earlier titles. The interface for battle is very much what one would expect from an old-school RPG. Options like Attack, Magic, and Items are all accounted for. But there is one major twist, and that involves the banking or borrowing of turns.

The strategy behind these choices all comes down to what kind of fight you are in. If you are just running around grinding on regular monsters and you feel strong enough to pull it off, you can just Brave four times with each character and knock out the entire battle in one turn. But try that in a boss fight and you will find your entire party face down in the dirt. In those situations, Defaulting to defend yourself, and then safely unleashing powerful strikes is far more strategically viable. 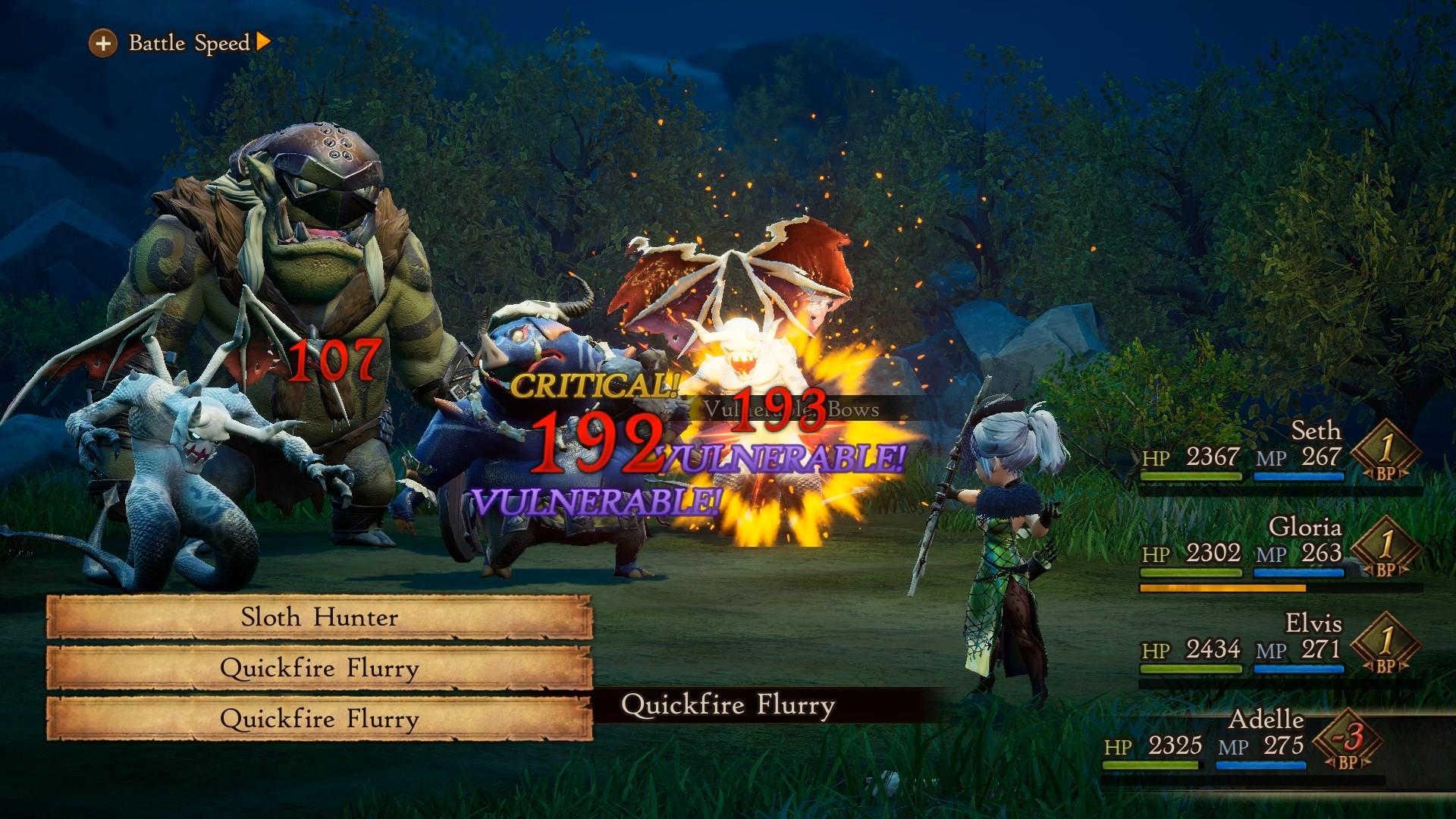 Bravely Default II continues to offer all sorts of quality-of-life enhancements to make the flow of battles smoother. The ability to increase battle speed by up to 4x makes grinding amusing and painless, as your little dudes zip and zap across the screen at light speed. And the ability to repeat the last actions taken by a character allows you to unleash hell on trash mobs with just a few button taps.

The battle system is not the only thing making a return. The character designs, artwork, and most of the general flow is very much the same as in previous titles. You control a team of four characters, wandering the countryside, beating up monsters and leveling up. The story takes you to a new city. There, you meet a couple of bad guy bosses that you will eventually fight. But first, you have to go do a quest, generally involving clearing a dungeon. At the end of the dungeon you fight the boss (or two). Defeating them wins you an “asterisk,” a mysterious object that allows your characters to take on a new job, complete with a new costume and a completely new skill set to unlock. Rinse and repeat. 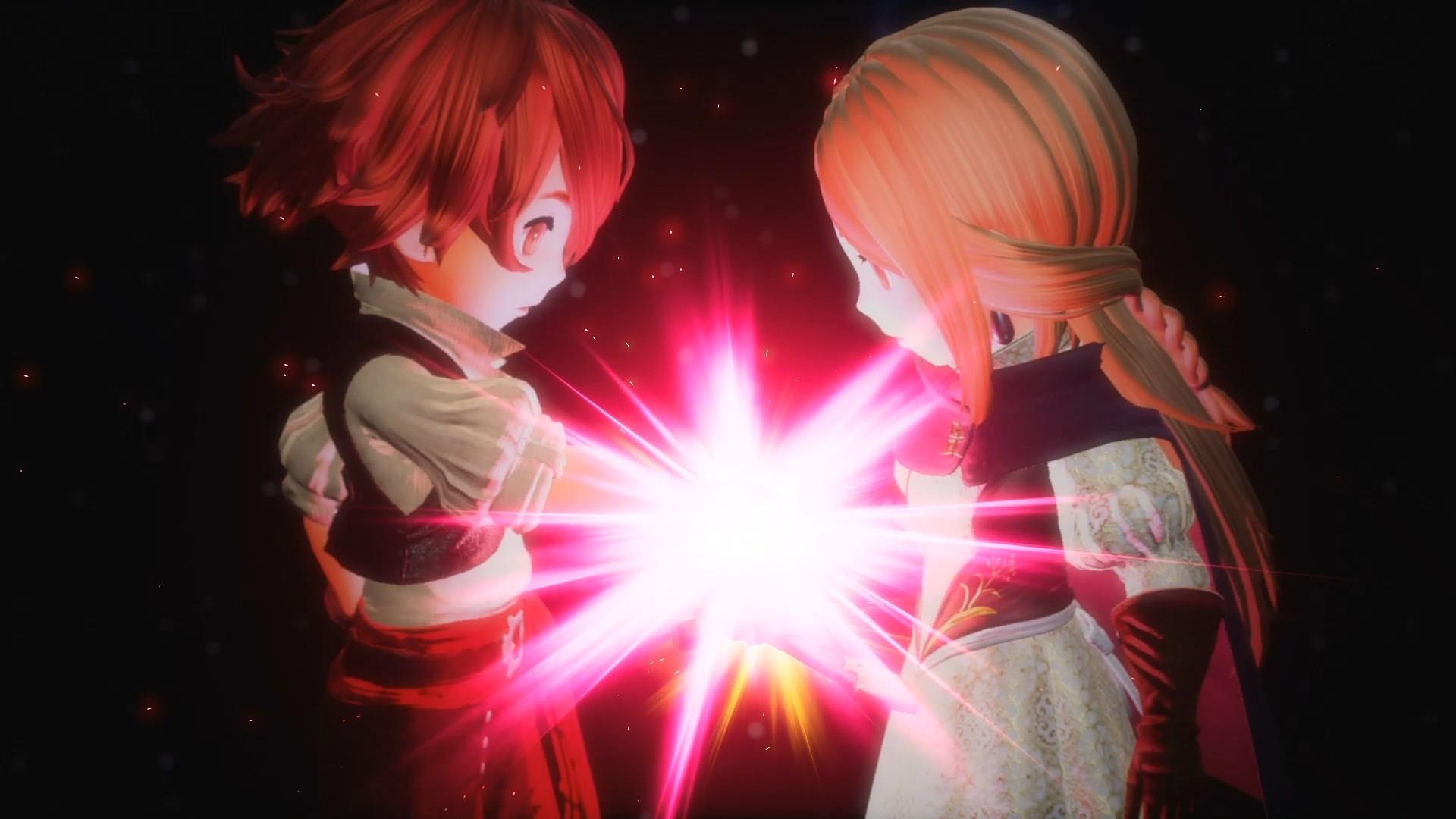 Jobs start in familiar territory. The first few you acquire include traditional Final Fantasy roles like White Mage (Curaga! Esuna!), Black Mage (Fira! Thundaga!), and Monk (Bare-Knuckle Brawler!). But before long, you will be unlocking more exotic jobs, like the Pictomancer – who debuffs bad guys by dabbing them with paint; and Arcanist – which is essentially a necromancer. There are also some more familiar FF jobs to unlock later in the story, like Dragoon and Bard. In all, the number of jobs in Bravely Default II is stunning. They just keep coming.

Every job unlocked requires its own grind to reach its full potential. At the end of each battle, the party is rewarded with XP – which levels up the characters, and JP – which levels up their current jobs. This mechanic is where the majority of Bravely Default II’s delicious grindiness comes in. When you get a new job, it is fairly weak and underpowered, making it imperative to run in circles fighting trash mobs until your newly minted job is powered up a little bit.

Old school grinding is as integral to Bravely Default II’s DNA as gills are to a fish. This is a game that could feasibly be beaten in 40 hours, but psychos like me could easily double - or even triple - that number, simply by insisting on maxing out every character with every job. This is not a game for those looking for a quick jaunt, but rather one for those in the mood for a meaty meal that could last a few weeks. 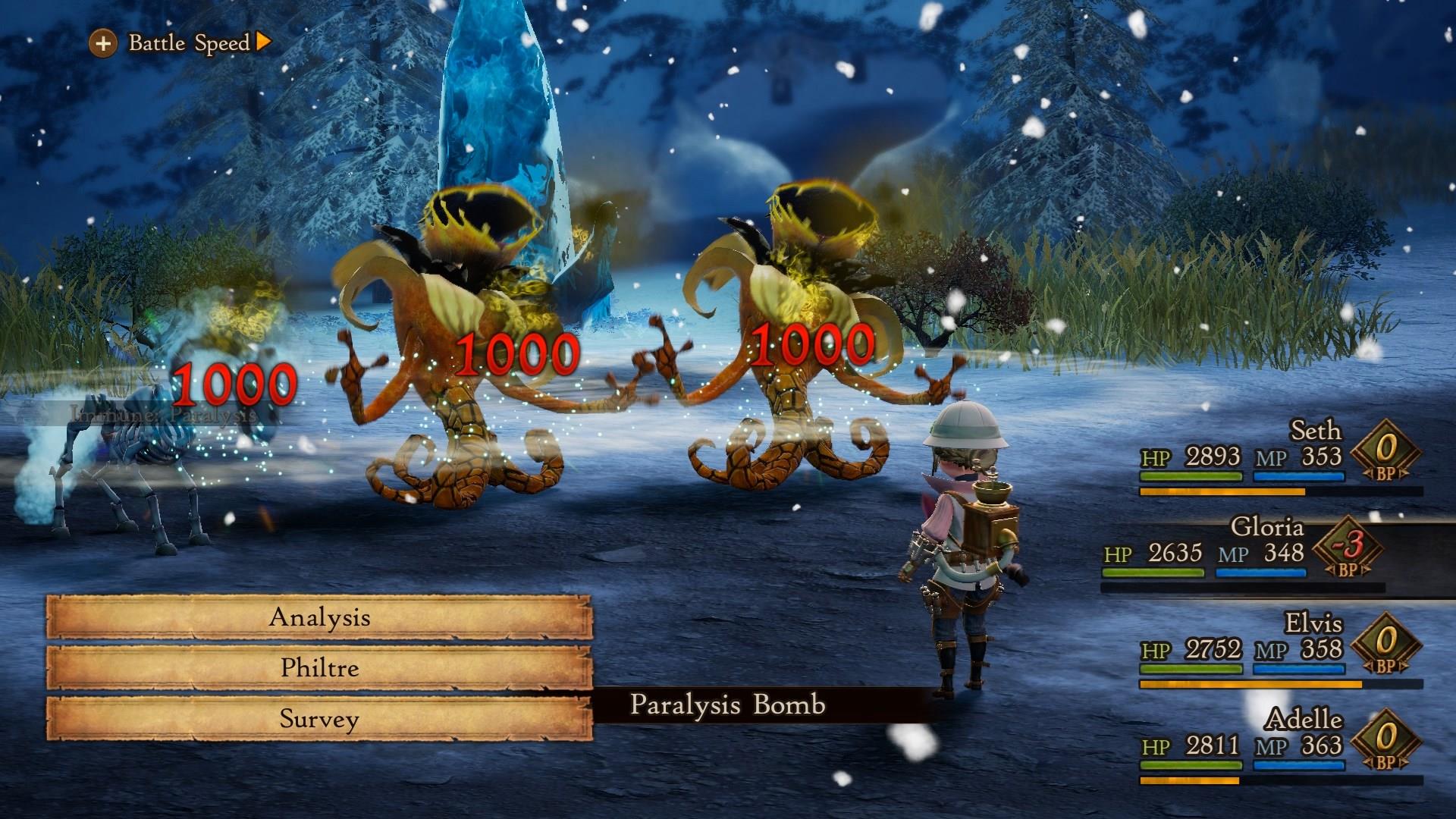 As usual with the Bravely Default series, the story is fun and light, involving the characters coming together to help one of them find some lost crystals. Though it is well-written and witty, you already know how this tale is going to play out. But the story isn’t the point here, it’s the juicy gameplay that makes Bravely Default II great. Once you unlock several jobs and start playing around with the passive abilities earned by each - slowly turning your characters into nuclear tanks - you realize just how clever the intricacies of this game really are.

A few diversions, like skippable side quests and a surprisingly engaging card game, help flesh out the experience. But players can expect to spend most of their time with Bravely Default II bashing on monsters in a happy Zen state. For certain older games like me, this series works as a time machine, taking us back to a time when mechanics like hit points and experience points only existed in one genre of game. Sure, Bravely Default II might be a little old-fashioned. But then again, so am I.

Bravely Default II is a throwback to the Final Fantasy games of the '80s, in all the best ways. Some modern quality-of-life enhancements smooth the road a bit, but all the good stuff you remember is here for the taking. If grinding monsters for levels, unlocking new skills, and hunting for missing crystals is your idea of a good time, then Bravely Default is your video game nirvana.