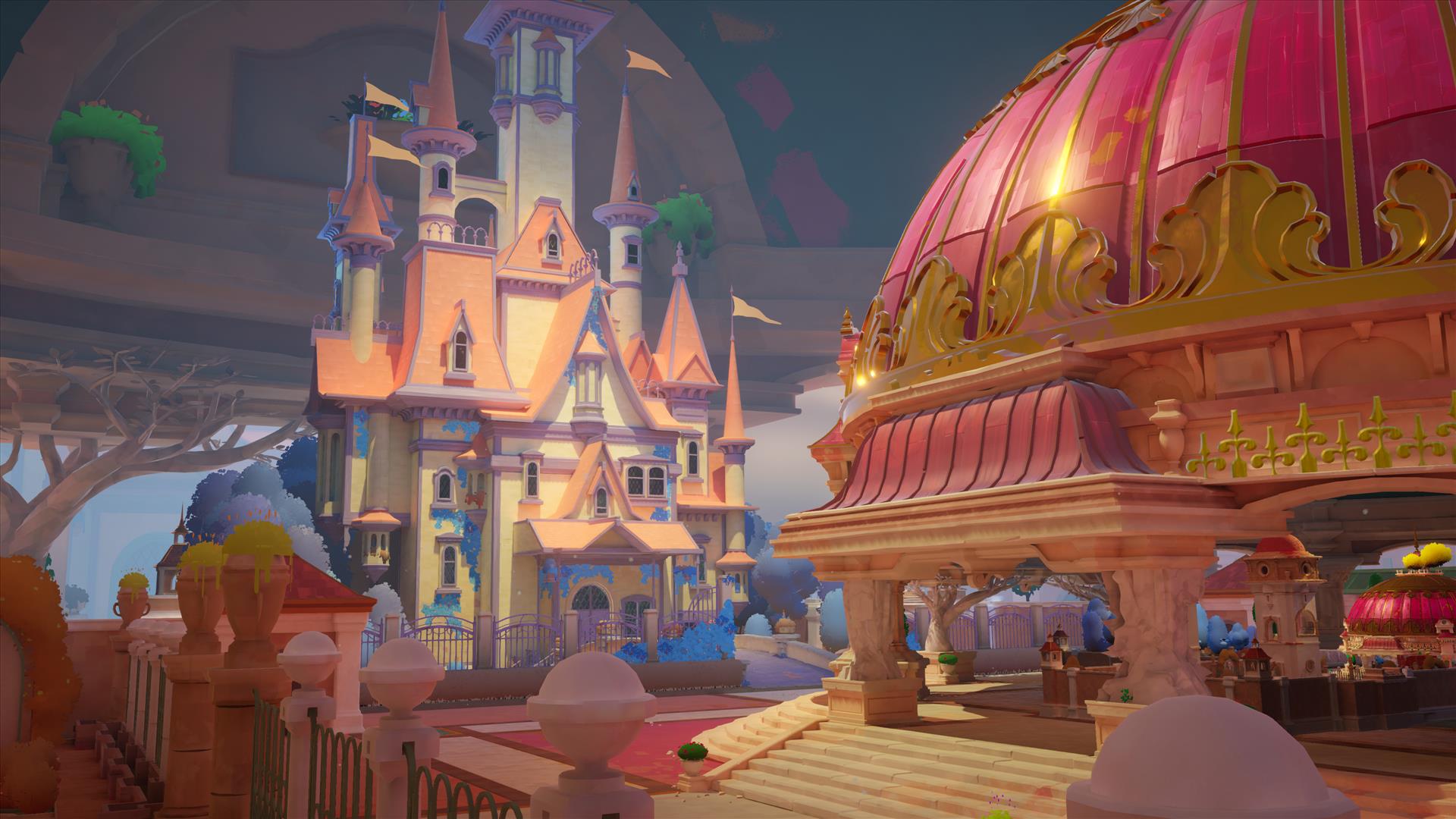 To understand the game mechanics of Maquette, it is important to understand what a maquette is. According to Wikipedia (the reliable source of all truth on the internet), “a maquette is a scale model or rough draft of an unfinished sculpture. A maquette is used to visualize and test forms and ideas without incurring the expense and effort of producing a full-scale piece.”

Of course, there is a literal maquette in the game – a model within a model within a model, which allow the player to manipulate objects in micro and impact the macro. But I was far more interested in the metaphorical maquette the game depicts, the rough draft relationship that the two protagonists enjoy -and then endure - as the game goes on. Except for those lucky few that marry their childhood sweethearts (and remain married until they die), almost all relationships can be considered maquettes, dress rehearsals for the big show. And sometimes even the big show is just a test run for the next big show. Frankly, no matter how secure you are in a relationship, you can never truly know whether you are just maquette-ing again. 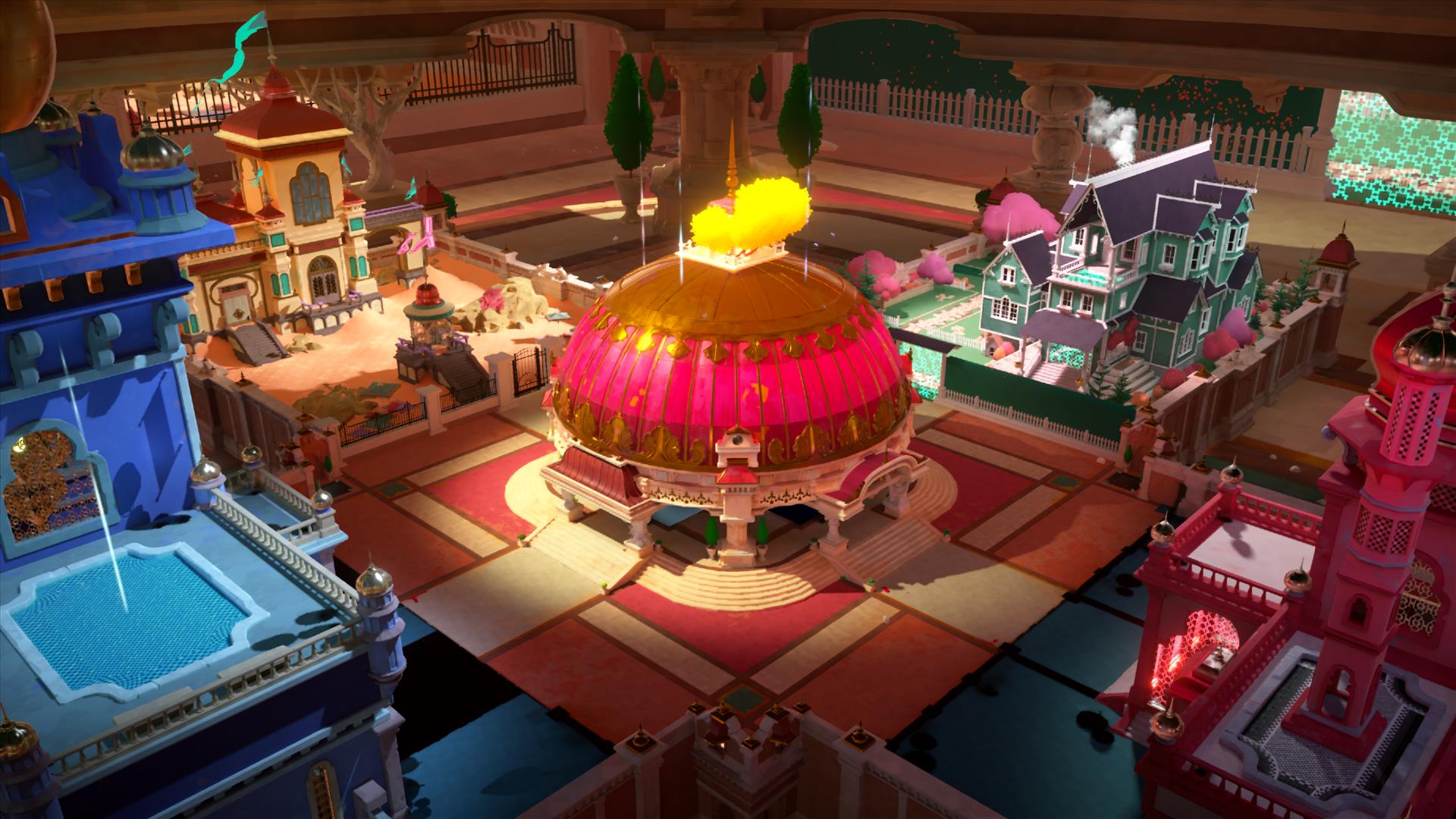 Though the game is visually gorgeous and has a soundtrack that is a feast for the ears, it was this narrative relationship arc that pushed me forward to complete the game. Every step along the way - the bittersweet familiarity of the meet-cute, the giddy honeymoon period, the eventual wear and tear as real life sets in, and the inevitable exchange of possessions on neutral ground - rang incredibly true, a mundane story that is endlessly repeated, but feels exquisitely fresh and raw when it happens to you.

Maquette tells this familiar, universal story well, through dialogue recorded by Bryce Dallas Howard and her real-life husband Seth Gabel. The couple have a natural chemistry (obviously), and the spoken vignettes are effective, lending an emotional weight to a game that is essentially about manipulating objects to solve puzzles.

These narrative moments are brief, never taking the player away from the gameplay for too long. As they appear, sketches – presumably from the couple’s shared sketchbook – slowly appear, sketched on walls to accompany the scene, much like a modern-day Cover to Cover. As the game goes on, recurring themes run through these sketches, echoing earlier conversations and events. The entire effect is rather lovely. 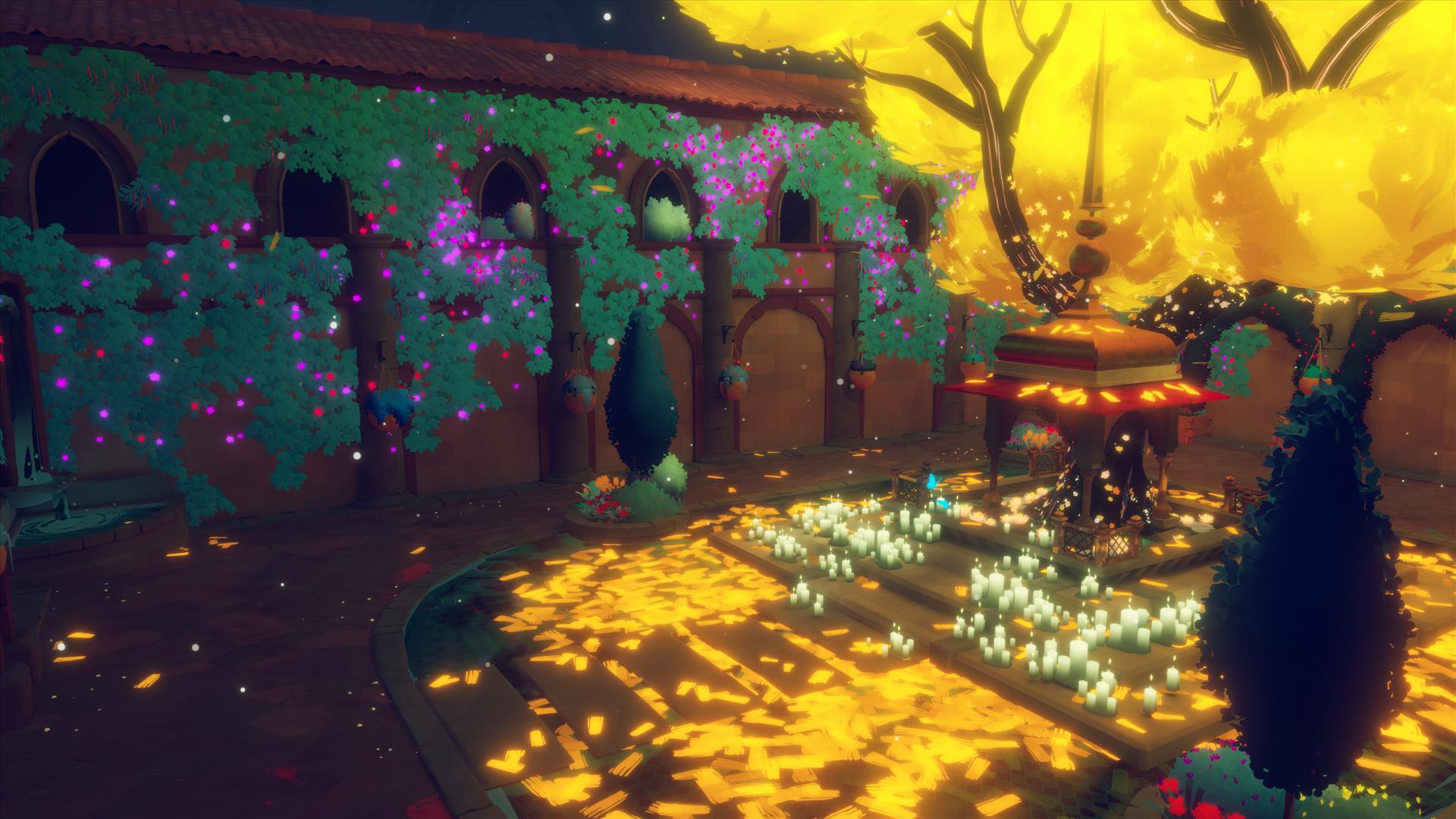 As the game went on, I realized that it was very even-handed in its depiction of the central relationship. There is no “bad guy” in this scenario, just a couple of people that enjoy each other, and then over time realize that they might not be right together. It is interesting, because I found myself identifying with first one character, then the other, as various moments rang true from my own experiences.

Though this narrative structure holds together well enough, it never quite reaches the heights of some other, similar narrative puzzle games, perhaps because the gameplay only relates back to the story on a metaphorical level. Where a game like Giant Sparrow’s What Became of Edith Finch eventually delivers an emotional wallop by blending its story more literally with its setting and puzzles, Maquette is plagued a bit by the disconnect between its gameplay and the story it is trying to tell. The player is tasked with solving puzzles to move the story forward and unlock the next scene. Unfortunately, these puzzles range from “clever and enjoyable” to “finicky and rage-inducing”, which can leave the player a bit distracted when the eventual narrative scene plays out. 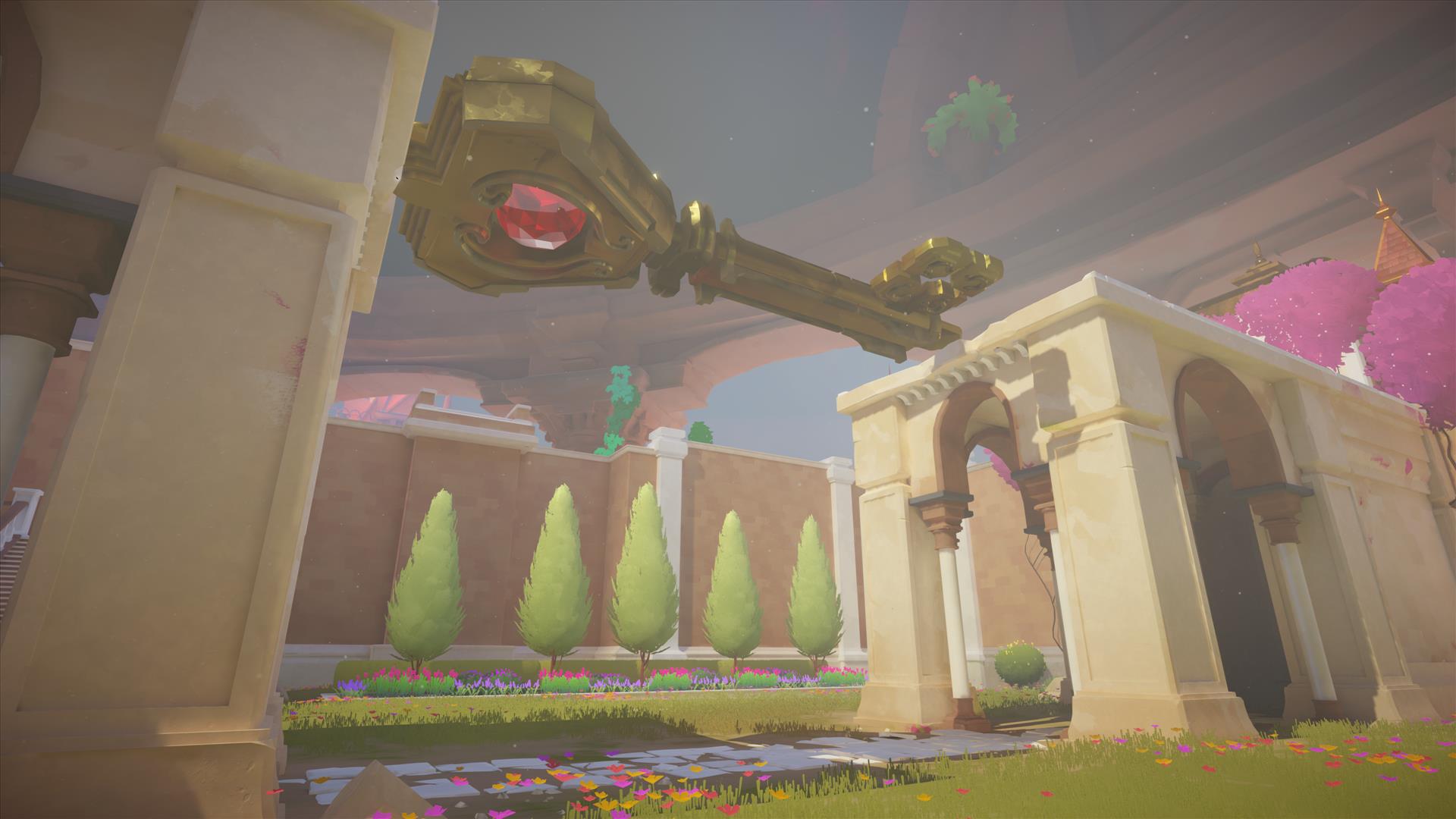 The primary brain-bending mechanic in Maquette is ridiculously clever (VR fans might recognize it from the very-thematically-different A Fisherman’s Tale from 2019). Here’s how it works: picture a dome, under which are several structures – houses, castles, courtyards, and the like. And in the middle of these structures is another dome, a perfect replica of the first. And in this smaller dome, there are smaller versions of the houses, castles, etc. And in the center of that smaller dome, there is an even tinier dome, with the houses, the castles, and yet another dome. And on and on, turtles all the way down. The turtles stack outwards as well, as the player is given the impression that bigger and bigger domes extend all the way to infinity.

But (and follow me here) the secret is that you can pass an object from one incarnation of the dome to another. Say you have a rock. You take this rock and set it in the courtyard of the “lifesize” dome. Then you move to stand above the same courtyard in the tiny dome, and there is the rock, only it is a tiny version of the rock. Pick it up and carry it out into the bigger dome, and you have just shrunk the rock. Using similar techniques, you can “grow” objects by shifting between domes and picking up bigger versions of them. 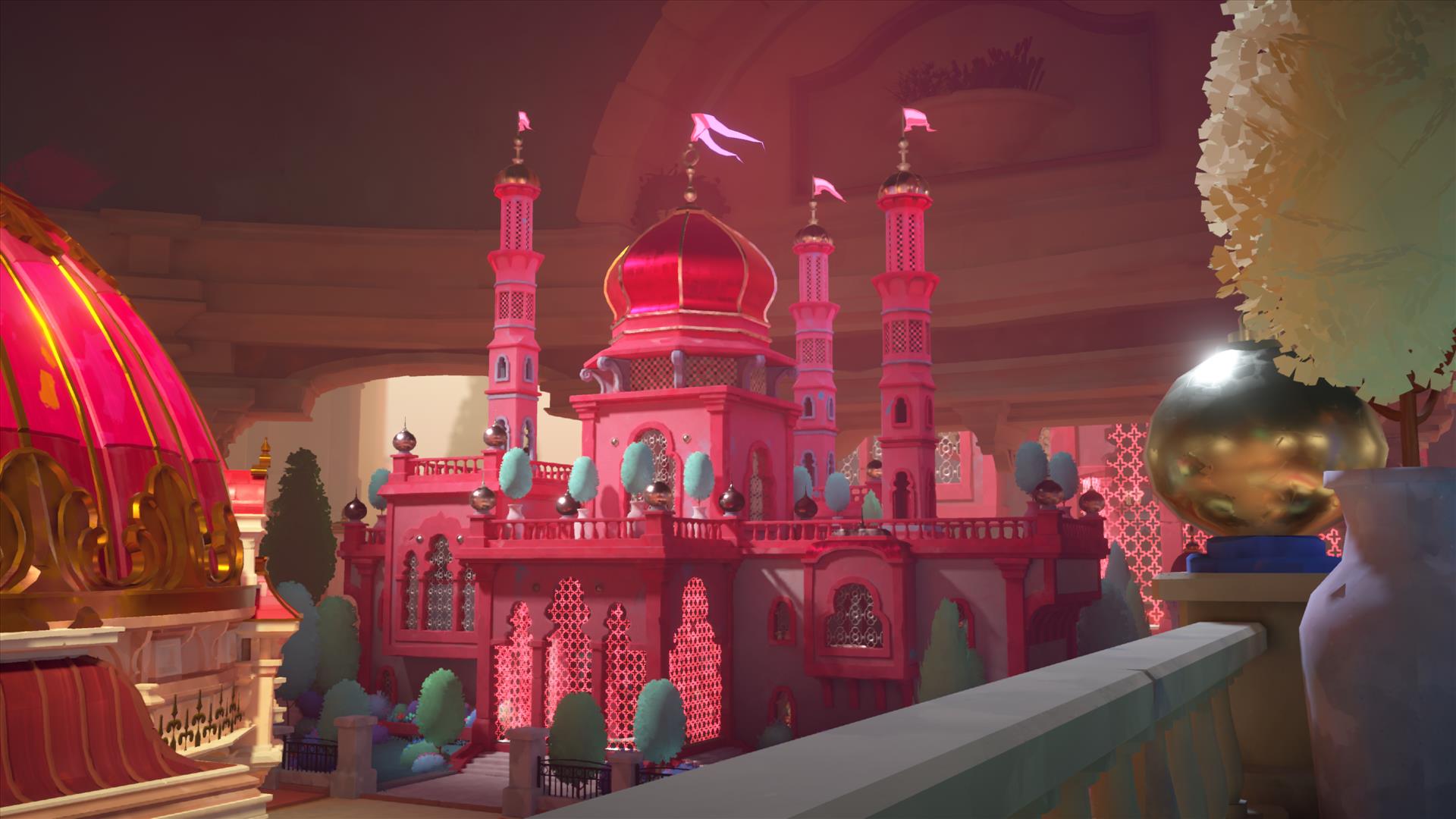 As a puzzle mechanic, this shrinking/growing object manipulation is ridiculously cool. In fact, with the way Maquette plays with scale, I found myself wishing that it were a VR game, as seeing some of these miniatures in 3D would be truly spectacular. But even as a “flat” game, the size-shifting dynamic is pretty amazing. It is very fun to put an object near a model-sized structure, and then run out and actually carry that object into a life-sized version of that structure.

The primary problem I had with Maquette’s puzzles wasn’t necessarily the size aspects of them; rather, I often found myself at a loss as to what to do with the objects once I shrunk or grew them. The landscapes under the dome can be sprawling, and the solutions to Maquette’s puzzles are often “make the object the correct size, then take it to this arbitrary location and do something incredibly unintuitive with it.”

For example, one puzzle has the player manipulating a portable flight of stairs. The eventual solution to the puzzle is to place the stairs – just so – next to a particular fence to gain access to the courtyard inside. The problem is, nothing in the game gives the player any indication that they should be heading over this particular fence, to this particular courtyard. Maquette expects players to just…figure it out.

At least a third of Maquette’s puzzles have some obtuse element like this. Puzzle fans will likely fall in love with the old-school lack of hand holding in Maquette. But more casual players (of which there will be many – this is a PlayStation Plus game) will likely throw their controllers down in bewilderment. 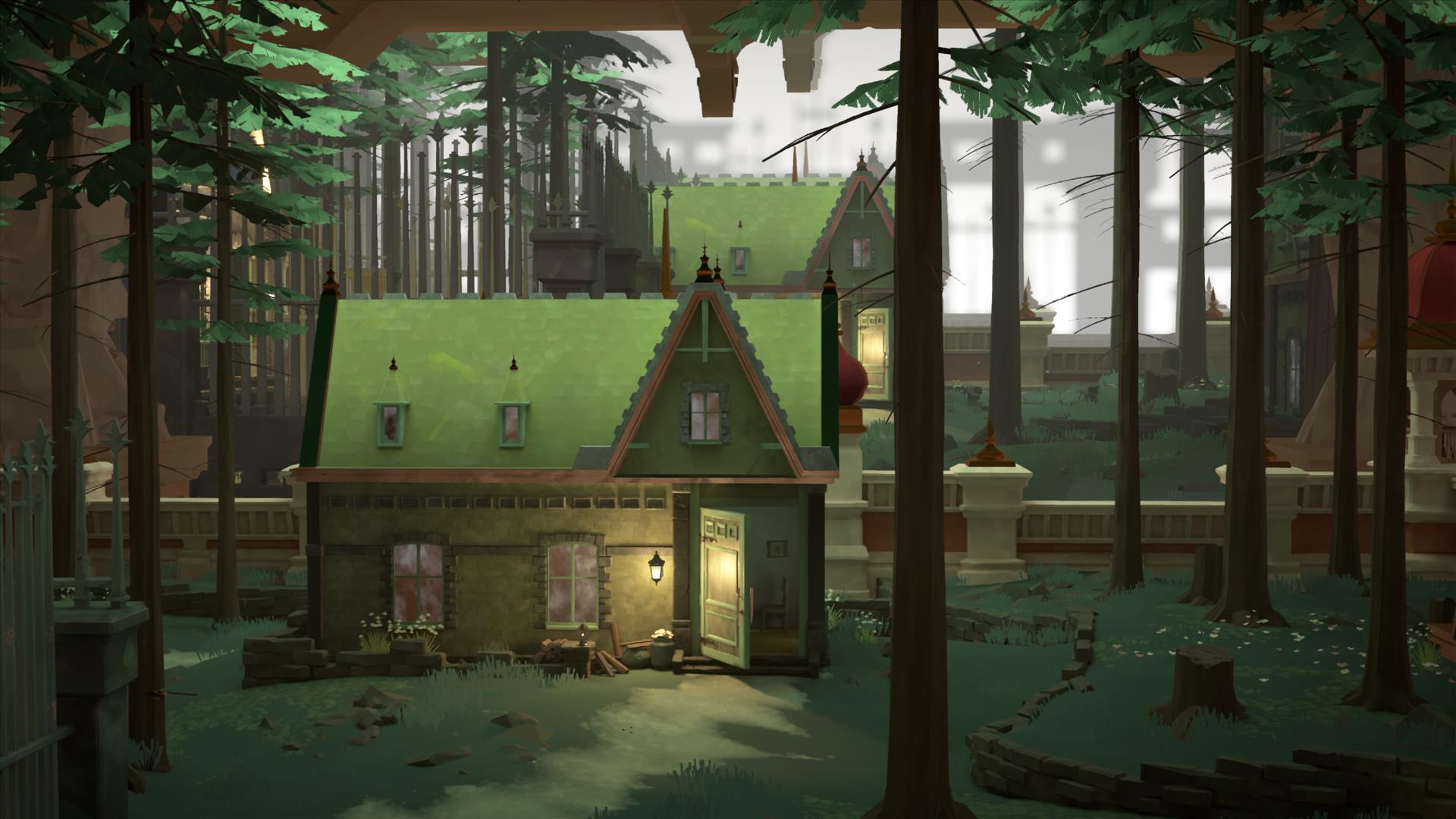 I also had some problems with actual manipulation of objects in Maquette. Even when I knew what I wanted to accomplish, I sometimes found the controls to be so finicky that I had a hard time getting the objects to go where I wanted them to go. There aren’t many puzzles in Maquette that require fine manipulation, when those moments do arise, the player is left feeling like they are handling objects with oven mitts.

Still, Maquette is a brief trip worth taking, if just to experience the story, the visuals, and the ultra-cool dome mechanic. I would also be remiss if I did not mention the stellar soundtrack, including the first needle-drop in the game, which sent me scrambling to Google to try to figure out why the song sounded so familiar. It is clear that a lot of thought went into the thematic elements in Maquette’s music, and it sets the mood and tone throughout the game nicely.

Within days (or maybe even today), guides and walkthroughs for Maquette will be available online. I would recommend keeping one of these close at hand to help you when Maquette leaves you feeling confused. With a bit of assistance to get through the rough patches, Maquette can be a rewarding, good-hearted experience. Nothing in life worth experiencing is without its challenges. Games are a lot like relationships that way.

Maquette has a great puzzle mechanic as its central hook, though it sometimes struggles with obtuse implementation and fussy controls. Nonetheless, the narrative arc of the young relationship at the center of the game is well worth a bit of frustration to experience. Some lovely visuals and music make playing Maquette that much more rewarding.