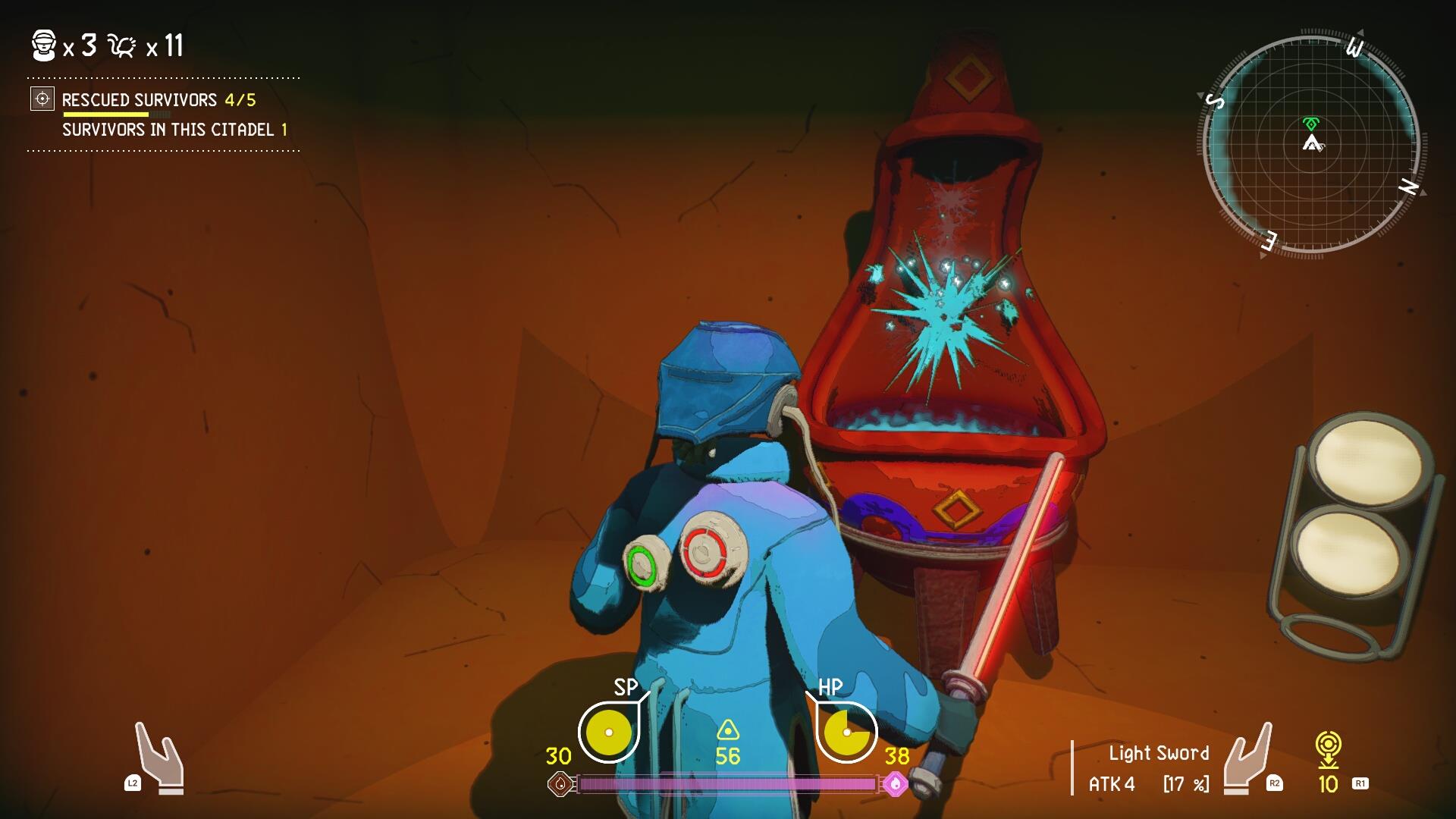 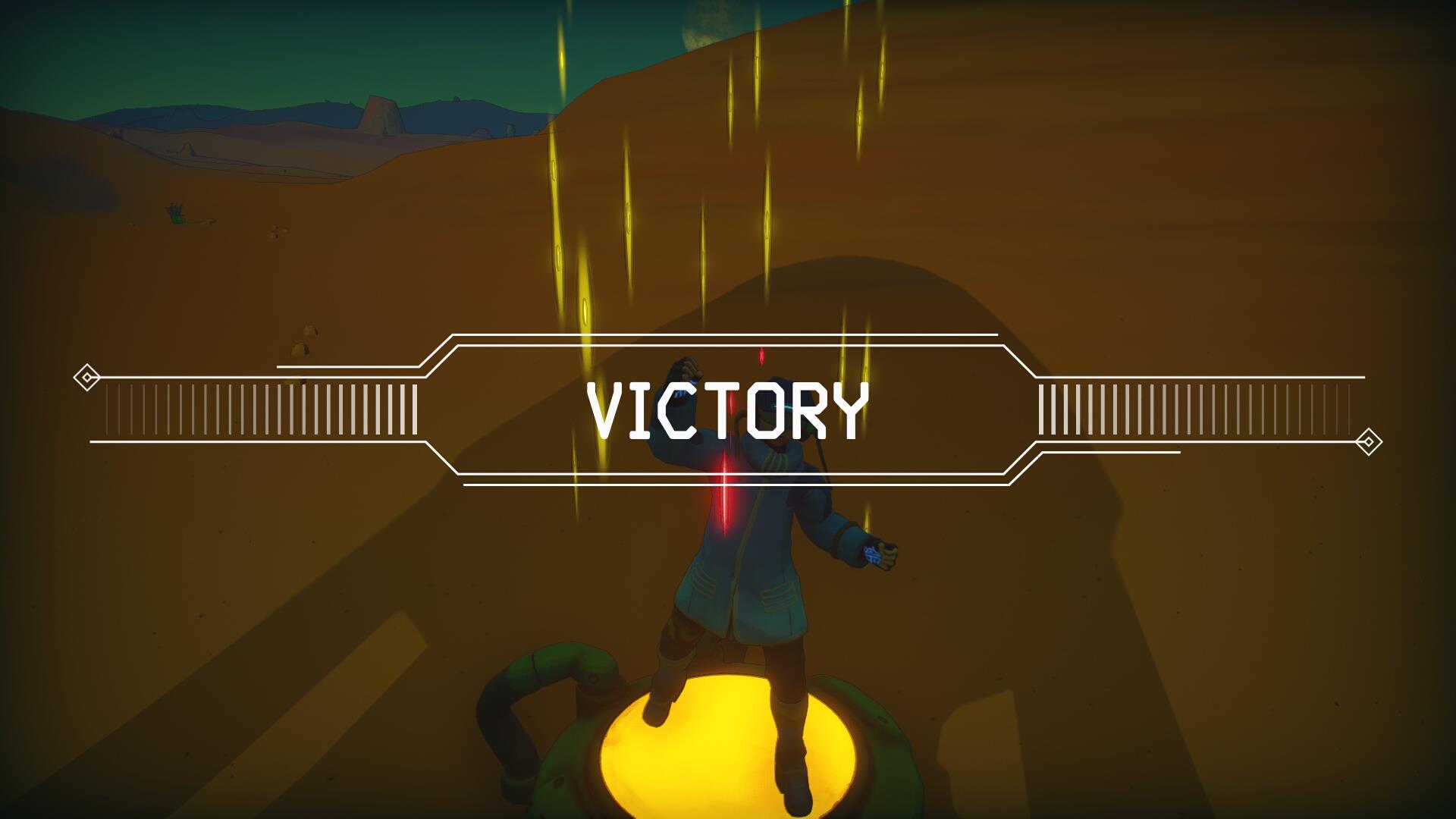 Victory! Lord, I thought I would never make it through.

If you are anything like me, your thought process when playing PixelJunk Raiders went something like this:

Oh, this game is gorgeous. This artwork is amazing.

This opening level is fun. No problems here. I’m going to love this game.

Wait, this second level is giving me a few problems.

Why do these monsters keep attacking me from behind?

Dear lord, these things are everywhere! This is only the second level!

Why is this game so damn hard?

I hate this game. I quit!

Of course, I don’t actually hate PixelJunk Raiders, and I didn’t actually quit. I knew that if I kept pushing and eventually persevered, the game’s systems would eventually become clear to me and I could start making some progress. And then I could take my learnings and put together this handy-dandy beginner’s guide with just enough info to keep new players from snapping their controllers in half – without spoiling any of PixelJunk Raiders’ stomach-acid-boiling surprises. This is a game that loves to lull you into a false sense of security, and blast you in the face with awful surprises. It's kinda awesome that way, but it'll make you cuss. 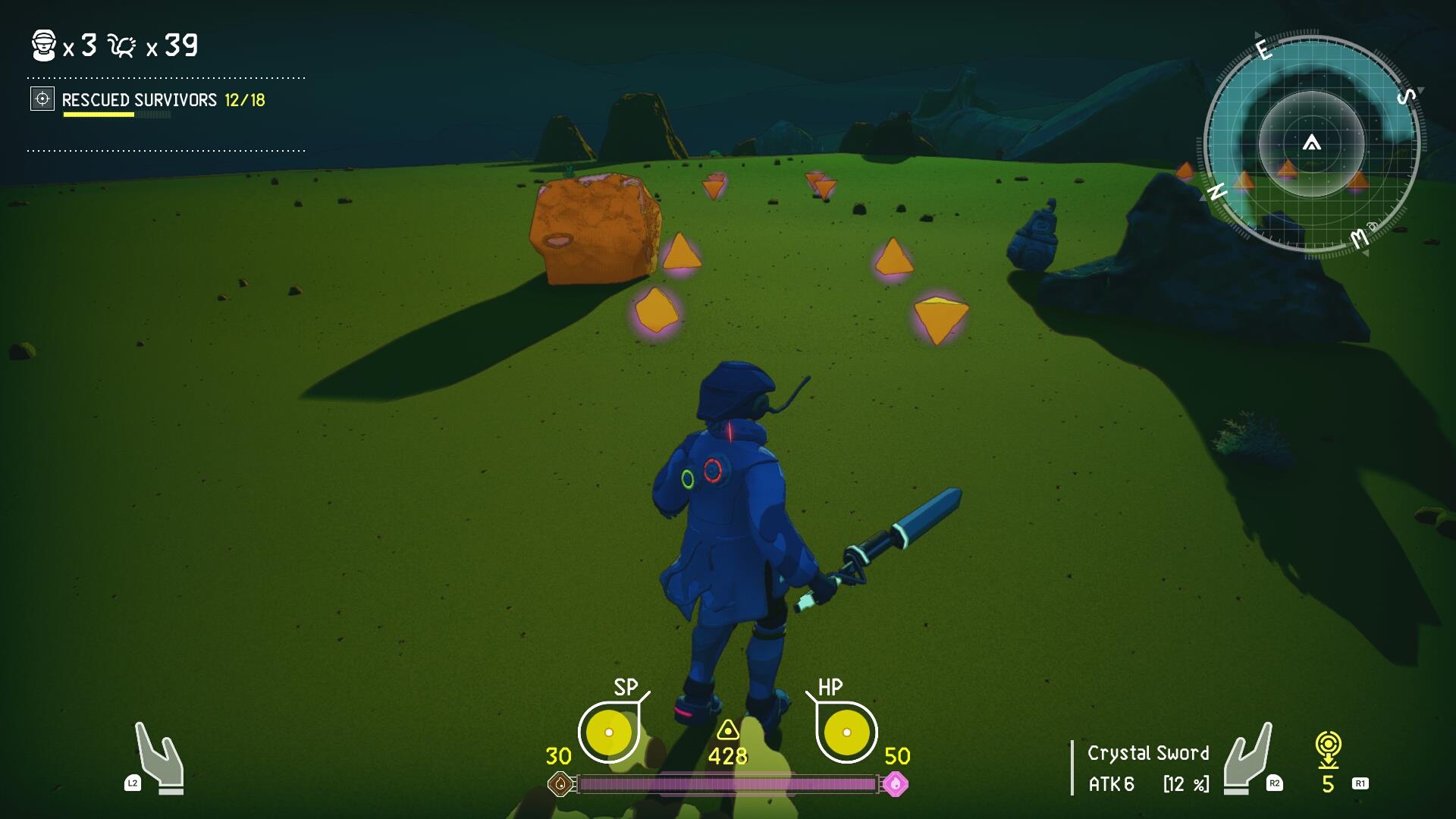 You can't see them, but there are like 13 Brians right behind me.

Keep Moving, and Always Watch Your Back

Look, this might seem like obvious advice, but hear me out. Most game designers focus attacks from baddies so that they come from the direction the player is facing, or from the peripheral. This is why players that are good at the single player version of a shooter get wrecked when they log in to try the multiplayer. Suddenly, they are getting sniped from the rear. It’s a lot to keep track of, and players need to adjust their thinking to compensate.

PixelJunk Raiders does not care about standard gaming sensibilities, and so it immediately defies players’ expectations on where attacks will be coming from. Aliens drop out of the sky silently and have no qualms about creeping up on you to attack from behind. They creep around corners. They silently surround you. Pause too long to open a jar or smash some crates, and you find yourself starting a new life – or just dying outright and losing all your stuff. You have been warned. Keep it moving, and try to be aware of all the space around you, even the places you can’t see.

Spin the Camera While Saving Survivors

On that note, make certain that you are watching your back while saving survivors. Every early mission in the game focuses on the player locating surviving “good” aliens and teleporting them to safety. This requires a five-second button hold – which is an eternity in PixelJunk Raiders.

So, even if you think that you have cleared the area of baddies, spin the camera with the right stick while you are saving survivors. That way, you can break off and deal with any attackers that creep on you while you are playing the hero. 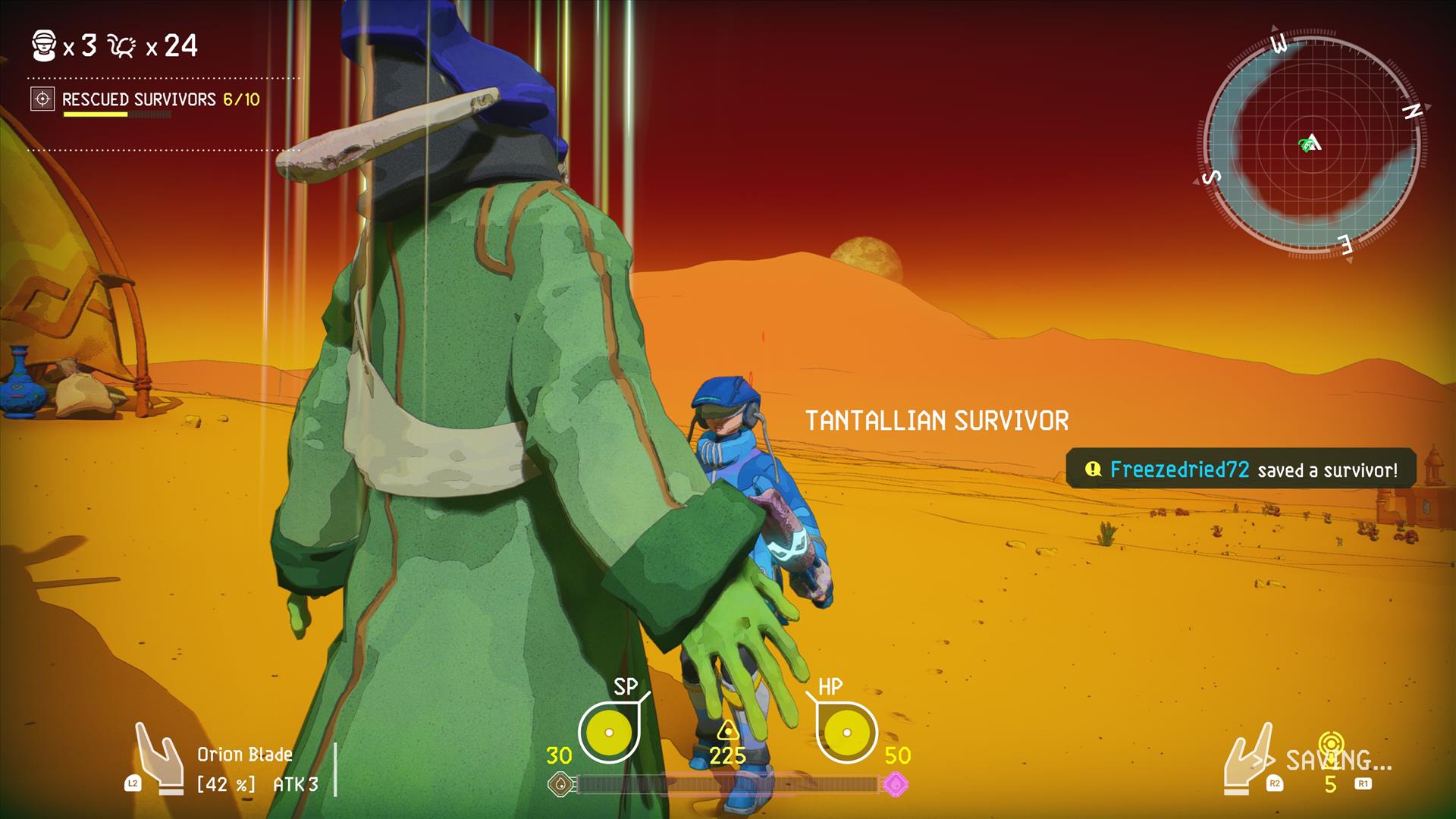 Move that camera to see behind yourself. Brians are everywhere. They live in the skies!

Wrangle the Baddies For Group Kills

While the bad aliens seem overwhelming in their numbers at the beginning of the game, there are ways to deal with them safely. If you are being attacked by more than one or two – run away. These guys are impossible to deal with in groups until you have some decent weaponry. They will attack from all sides if you are still, but they are also kinda dumb, and they will just kite along behind you in a big train if you run away.

These days, when I roll into a settlement, the first thing I do is run around and gather as many of the bad aliens as I can together in a big conga line. As long as you keep moving, they can’t get you (for the most part – they still get off a lucky shot every now and then). Once you have a bunch following you around, run those dummies through a choke point, and lay down a mine on the other side. Rinse and repeat until the area is clear-ish, then mop up any stragglers one-by-one before you try to collect any goodies. 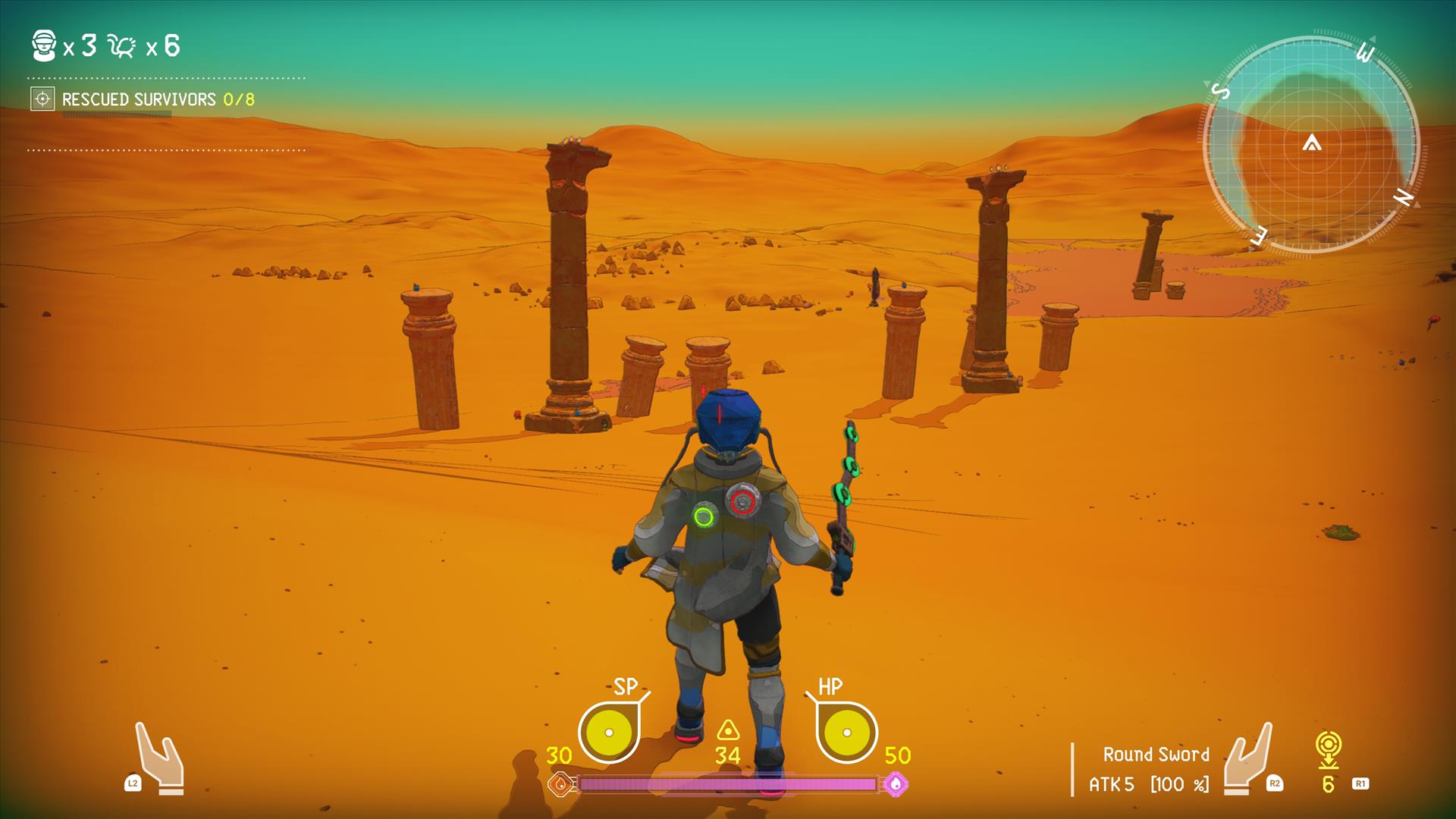 Ruins are good. Don't see any Brians there. Go get that stuff!

Pay Attention to the Music

This one is easy. The score in PixelJunk Raiders shifts when there are bad aliens around. The battle music is distinctive, so if you hear it, start looking around frantically for what is causing it. And don’t forget to look up – they come from the sky!

Explore the Full Play Area before Moving into the Settlements

Citadels – which typically house the survivors you need to save and a bucket of bad guys (which, for some reason, are named “Brian”) – are typically marked with a weird floating spaceship/Borg-cube thingy floating in the sky above them. You may be tempted to rush right towards these settlements to resolve the level as quickly as possible. Don’t do that.

Instead, take your time exploring the area. You will discover that each level has a nice, big circle that you can explore. Avoid the settlements, and head for other areas of interest. You will discover weapons, powerups, and plenty of cash money needed to unleash traps once you get to the settlements. Before you know it, you’ll have stuff coming out your ears. This makes things much, much easier when you decide to close in for the rescue. 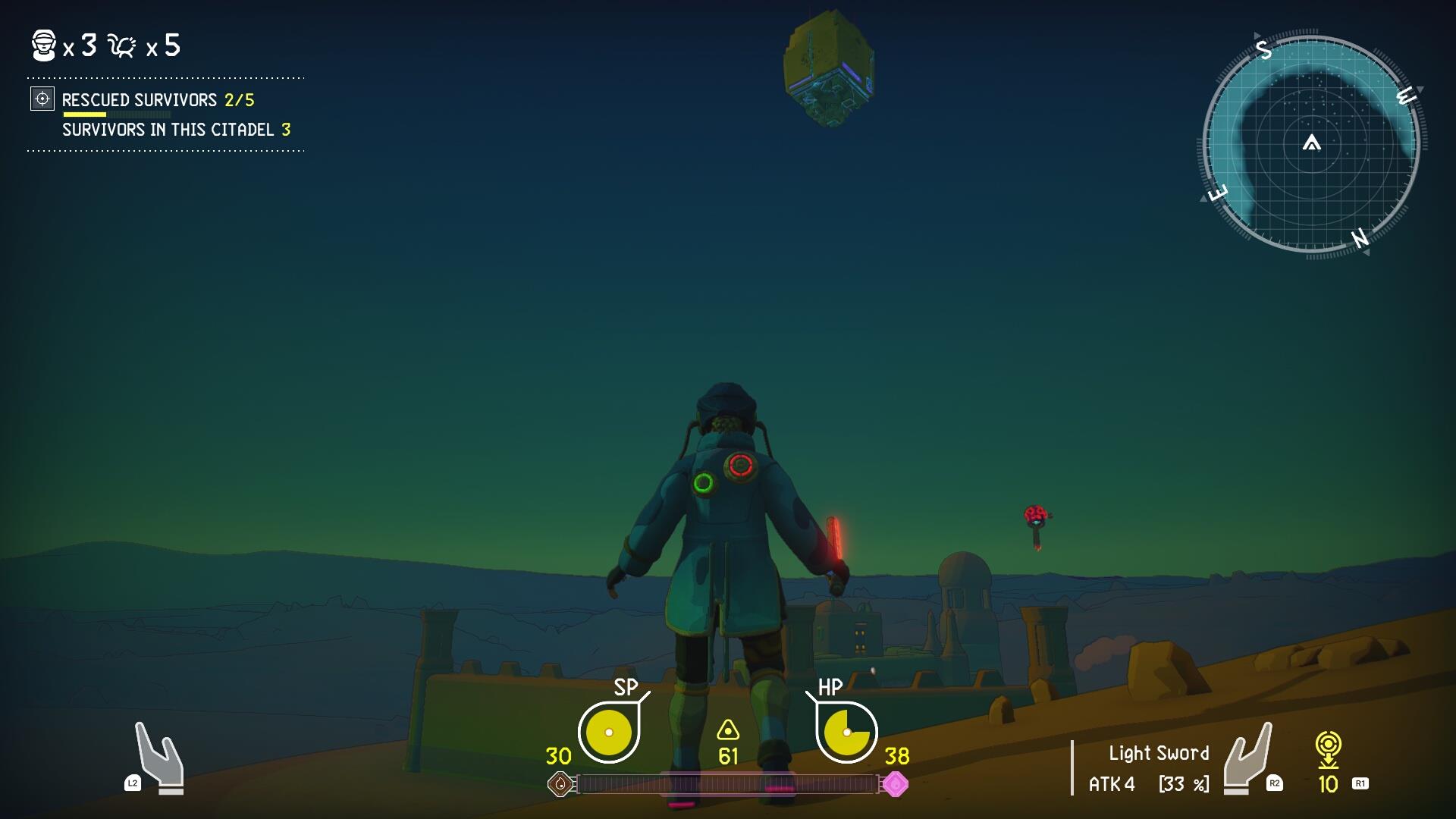 "Maybe I should run over there." Hell no, you shouldn't! You tryin to get killed? Go find some mines!

Don’t Get Overly Attached to Your Stuff

It’s best to take a “Breath of the Wild” attitude towards your stuff in PixelJunk Raiders. Not only do your weapons and shields deteriorate dramatically with each use, but you also lose everything you own if you die three times on a mission.

This can be somewhat mitigated by taking the “Corpse Looting” perk, which allows you to go find your body and get all of your stuff back, but even that feature runs by Dark Souls rules. Die on your way to recover your equipment from your corpse, and your stuff is gone for good.

Its best to just resign yourself to the fact that you are only borrowing your stuff, and that none of it really belongs to you in the long term. Even the sweetest sword will only last a few minutes, so don’t cry when it falls apart. Just equip the next one, and move on with your short, short life.

Immediately after the opening tutorial mission, you will get the opportunity to spend a single upgrade point. Your space-buddy will yammer on about how much he likes the perk that lets you disarm bad guys. Ignore him. He’s stupid. None of the bad guys at the beginning of this game have weapons. It’s just PixelJunk Raiders messing with you, as usual.

Instead, take the first health upgrade. The initial thirty hit points PixelJunk Raiders provides will only allow you to survive a couple of hits from Brians. You may have noticed that the game likes to spring things on you, and those extra twenty points will help keep you on your feet when some monstrosity comes lurching out of the sand.

Don't be afraid of these things. Punch 'em. Its good for you. Trust me.

Look, this is a purely personal choice. But hear me out. As I mentioned, your weapons deteriorate quickly in PixelJunk Raiders. Like, really fast. There are also a ton of inanimate objects in the game that you will want to punch in your quest for treasure. Of course, PixelJunk Raiders wouldn’t have your weapons deteriorate when you slash a jar open, would it? Of course, it would. This game is kind of a jerk.

Until you have a huge array of weapons at your disposal and you can afford to blow through them chopping up crates, leave your off-hand empty. That will reduce the wear and tear on your precious stuff until you are rich enough to not worry about it anymore.

If you see a jar, smash it. If you see a weirdly colored rock, break it. If monsters drop stuff on the ground, grab it. All of the stuff that you pick up in PixelJunk Raiders is tallied at the end of the level, and will give you points towards advancement to the next rank (and a new perk!). I know it goes without saying in video games, but grab everything! 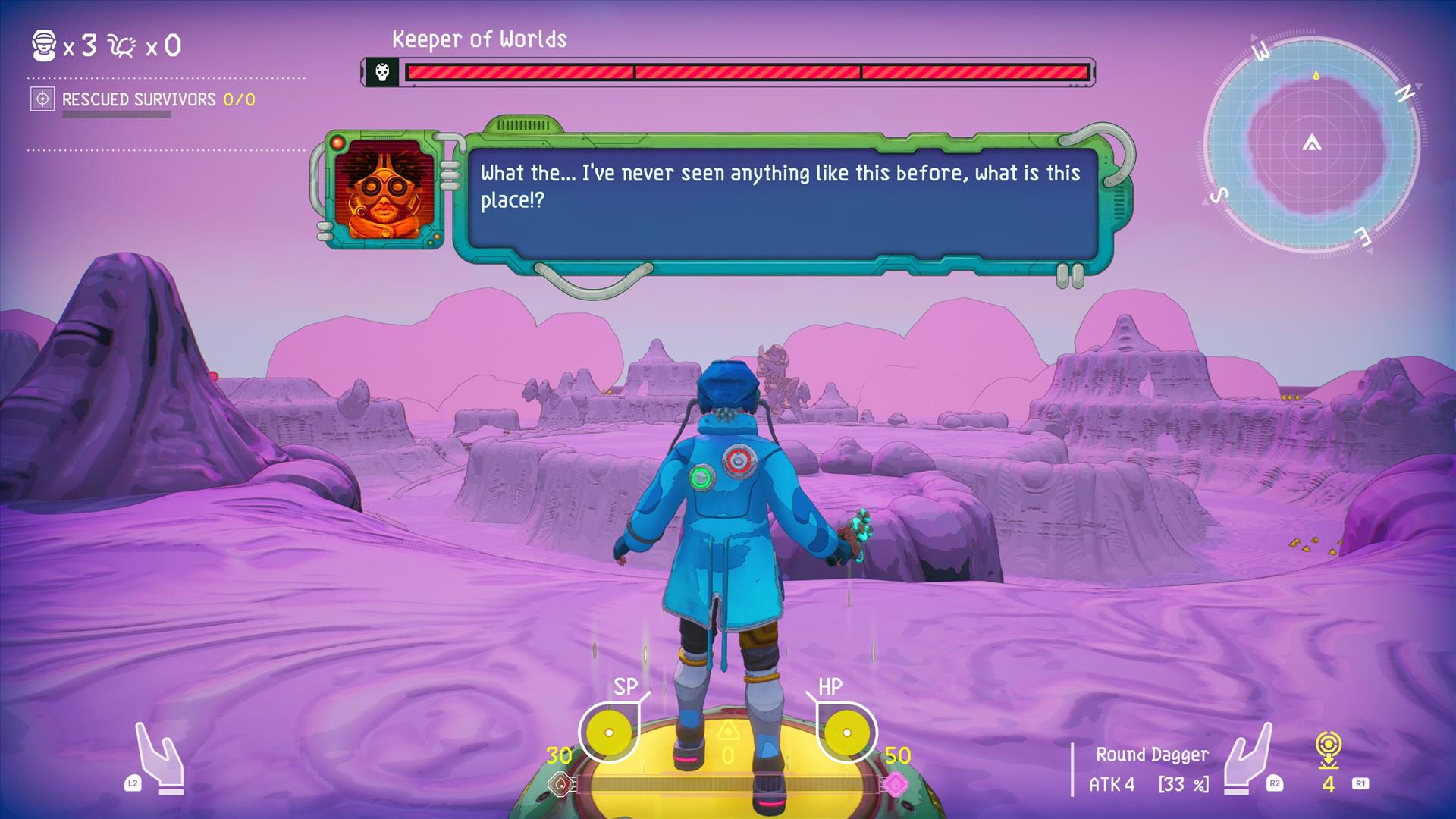 If you see this purple area, start calling your family to say goodbye. You are about to get wrecked.

You Aren't Ready for the Level 5 Boss Fight

PixelJunk Raiders is going to try to ferry you off to a boss fight with a difficulty of 5 fairly early on. You might think "Hey, I'm doing all right now, I might be able to give this a shot." No. Don't. Run. It's awful. Do anything you can to avoid this fight until you are far better equipped. If there are any other levels available, try those first. Or enter some random words into PixelJunk Raiders' weird word-based Coordinate Entry system to create levels for yourself.

Of course, if you have no choice, put your helmet on, kiss your stuff goodbye, and buckle up for the smackdown of your life. Try not to cry. You can always get new stuff. 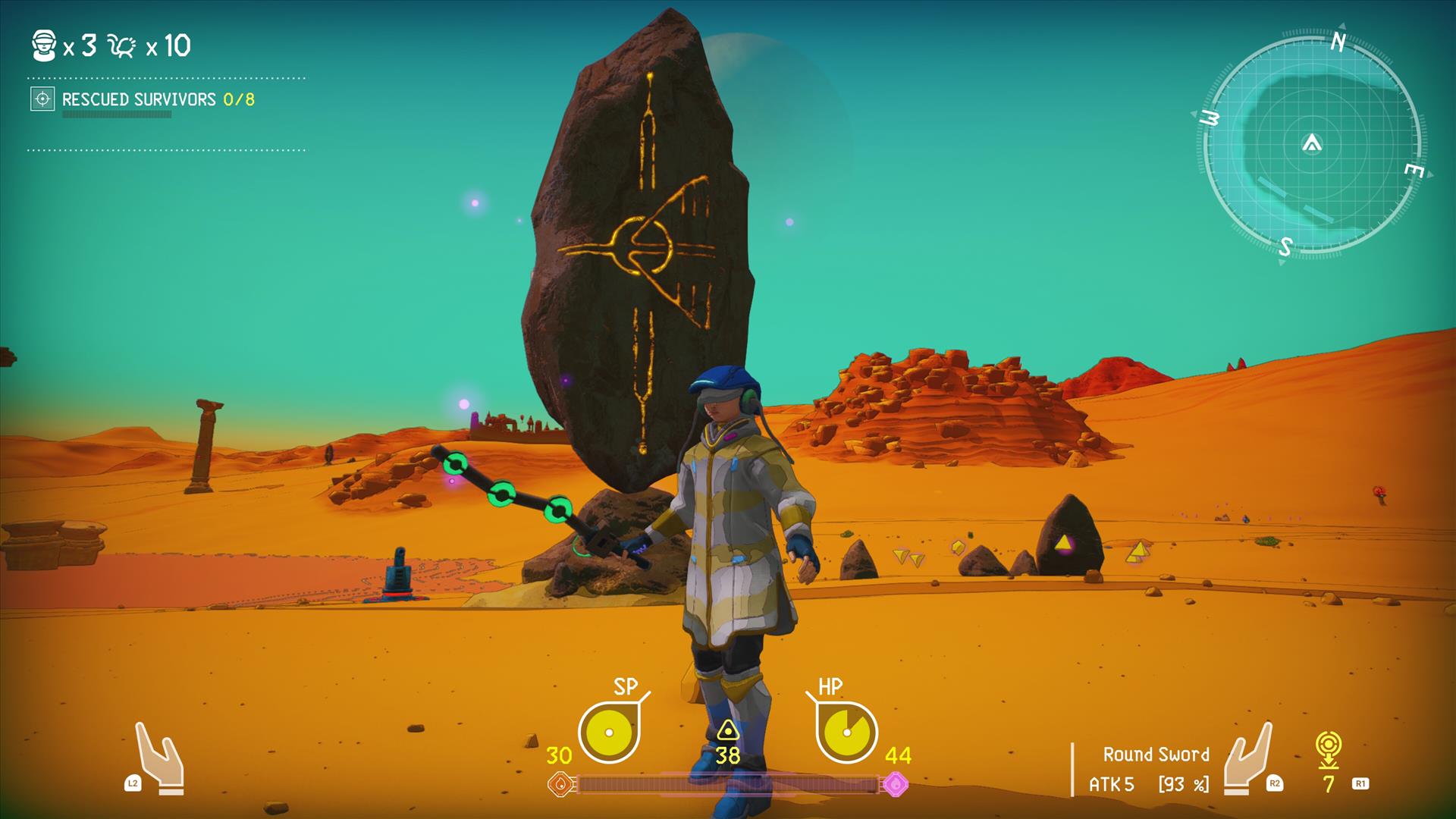 What does this big rock do? Gives you a false sense of security, that's what!

PixelJunk Raiders is tough, but once you get the hang of it, it is strangely soothing and rewarding. Hopefully, you find these tips helpful in getting your bearings in this beautiful, strange game. And shoot me a message on Twitter (@eric_hauter) if you have anything to add to the list. This is a game specifically made to crowdsource levels. I'm all for crowdsourcing this guide!