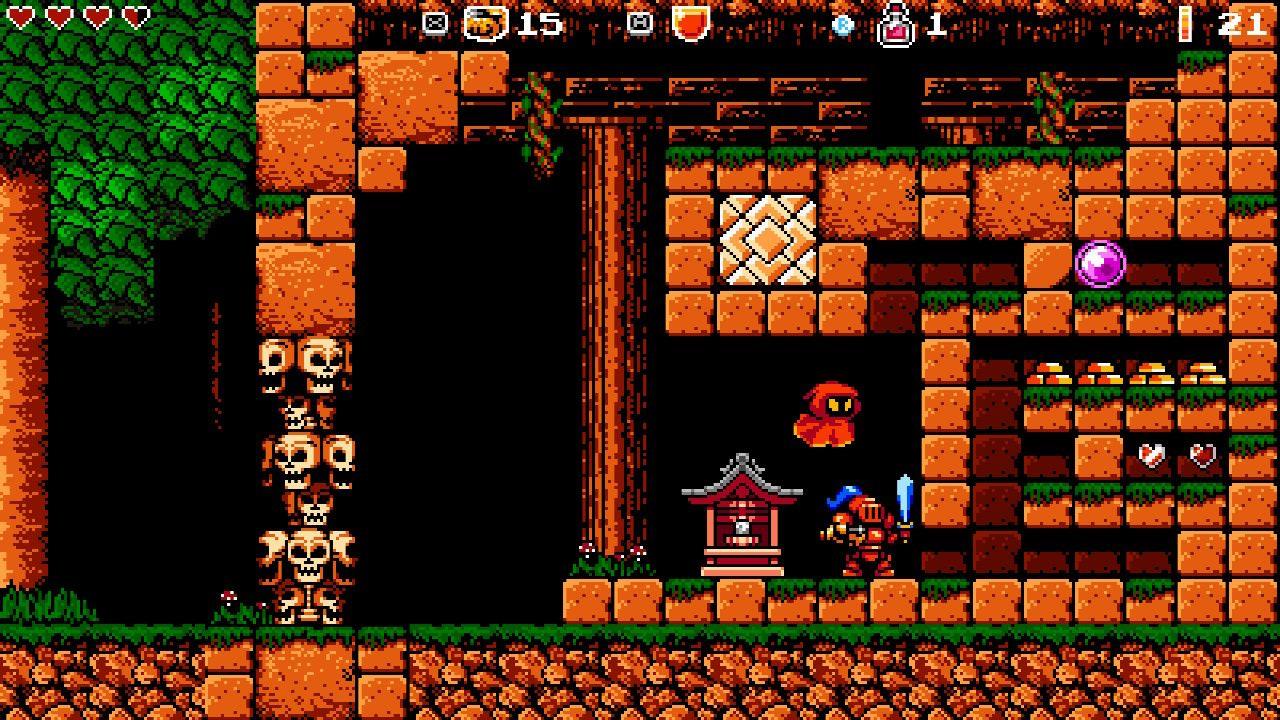 Written by Russell Archey on 3/3/2021 for SWI
More On: Cathedral

Metroidvania-style games have been around for many years now, spanning multiple generations of platforms. For those who don’t know, Metroidvania is a portmanteau of the words “Metroid” and “Castlevania” and originated from Castlevania games like Symphony of the Night and Circle of the Moon; Castlevania games that weren’t linear side-scrollers, but instead opted for the Metroid formula of an open-area you could explore. The player had to find certain weapons or items to proceed past certain road blocks, often leading to backtracking to a previous area to proceed further.  Over the years the term became ubiquitous; any game that utilizes that style is often referred to as a Metroidvania game…and I’m a huge sucker for them. When I heard that Elden Pixels, creator of Alwa’s Awakening and Alwa’s Legacy, were publishing another Metroidvania-style game - this time developed by Decemberborn Interactive - I was really excited for it. 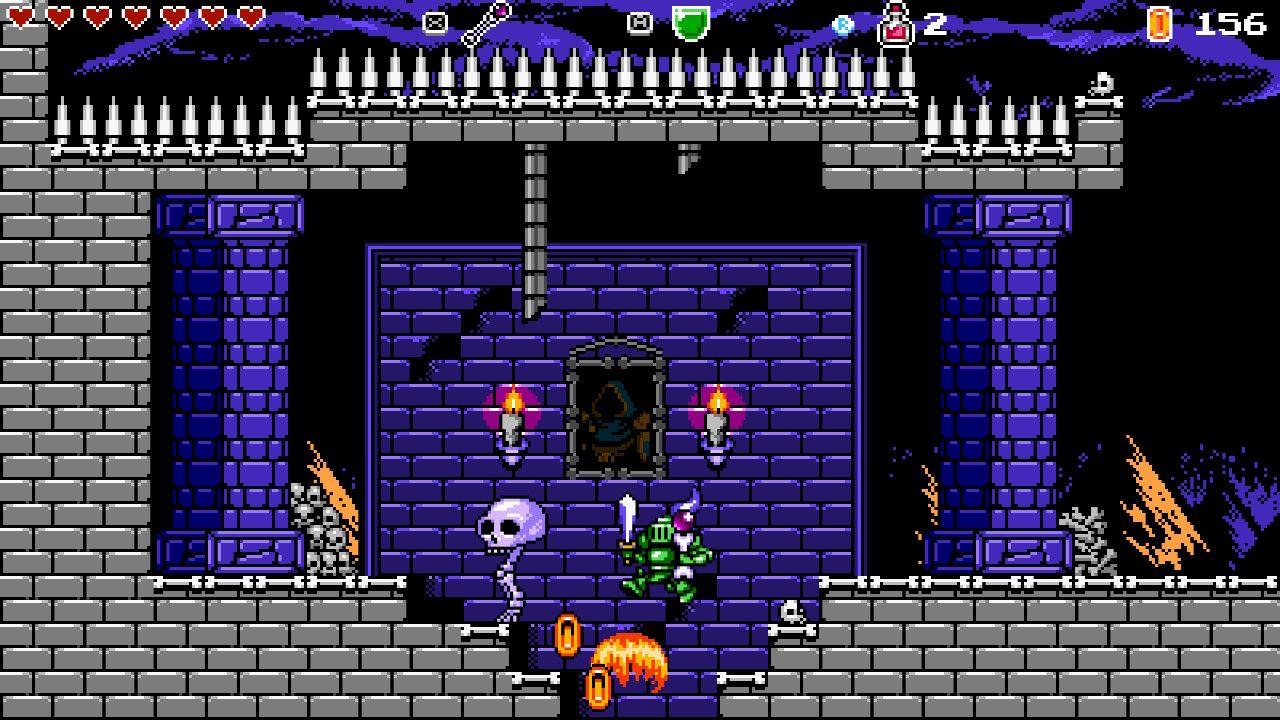 You begin the game as a nameless and silent red-armored knight who wakes up somewhere in a cathedral.  After wandering around for a bit and getting used to how the game controls, you end up at a boss fight against a giant eyeball named Augr, Guardian of the Cathedral. After taking that guy out, you meet a little spirit named Soul, who helps you out of the Cathedral. This is where the meat of the game starts. Since this is a Metroidvania-style game, you can basically go in any direction.  You have your goals, but aren’t specifically told to “go here” or “go there”.  Eventually, you’ll make your way back to the Cathedral, where you’ll find a giant door with five indentations on it. Soul just happens to have one of the five gems that fit onto the door. The other four are located in one of four other areas of the world. Your ultimate goal is to find the other gems and take on a demi-god known only as Ardur. 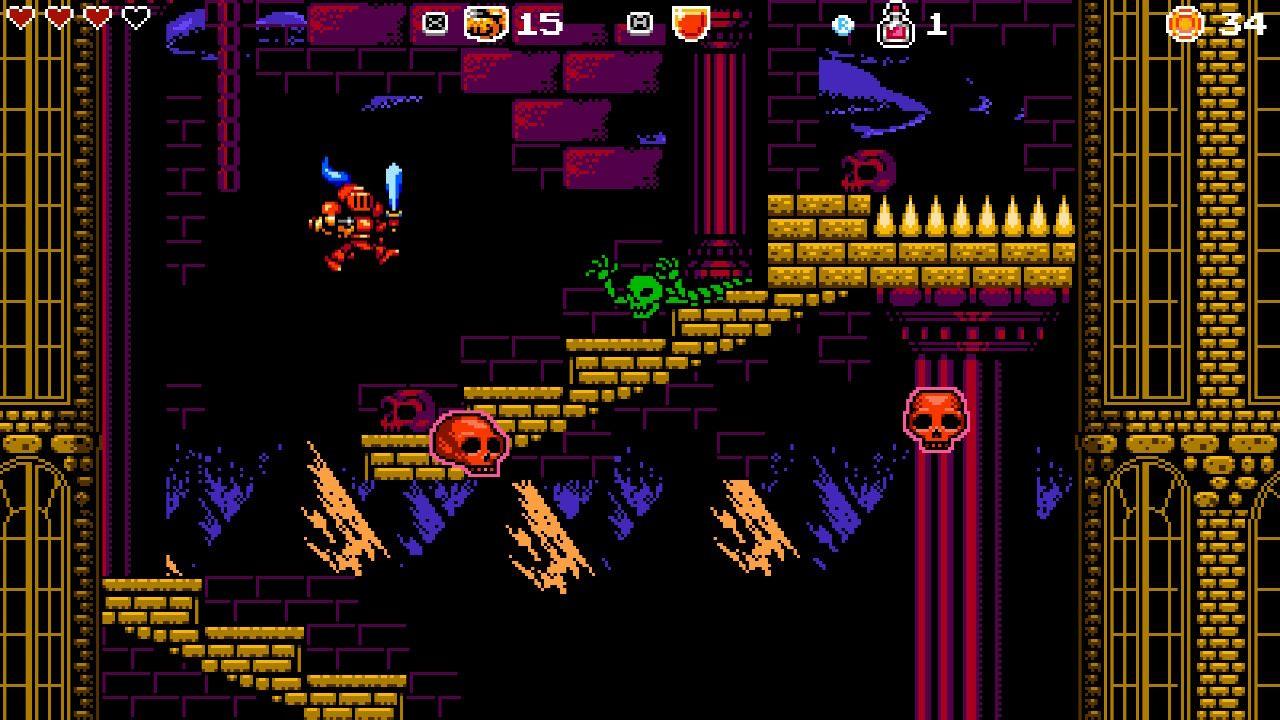 Your protagonist is armed with a sword he can use to attack enemies to the left and right, as well as bounce off of them - similar to Scrooge McDuck’s pogo bounce from Ducktales. You can use this bounce to reach higher places you normally couldn’t reach. You can keep bouncing off of enemies by hitting Down and the jump button each bounce, but it’s also very easy to accidentally overcorrect and fling yourself all over the place. As you progress, you’ll find upgrades to your sword and armor, items such as arrows you can fire off, augmentations to your armor such as being invulnerable to damage longer after being hit, charms you can equip to have Soul help you out or give you new abilities, and gold…lots of gold. Now and then you’ll also come across towns which serve as hubs. Towns include locations such as stores to purchase items and upgrades, as well as a bank to store your gold (I’ll explain why in a moment), a healer who can heal you and double your health for a cost, and a portal - which allows you to teleport to any other portal you’ve unlocked, allowing you to zip around the world more quickly. 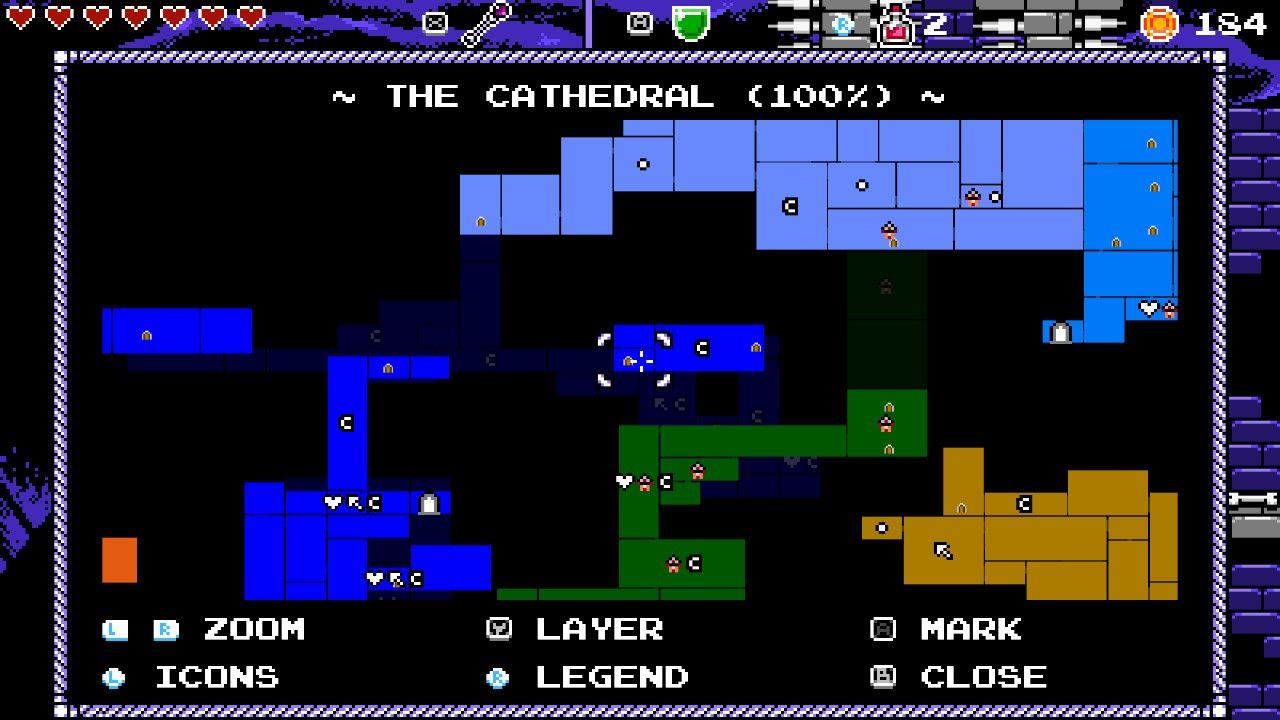 As with any Metroidvania-style game, exploration is the main theme. While you’re given ideas as to where to go and certain quests you can do, you’re not having your hand held as you play. You can go wherever you wish and tackle whatever you want. You may find the right path to proceed, you may end up at a roadblock and have to turn around, or you might wander into an area you’re definitely not supposed to be in yet and get obliterated by the first enemy you see. Even when you’re following a quest point, it is possible to get overwhelmed rather easily, and this is why you want to deposit gold at the bank in town. Whenever you die, you’ll go back to the last checkpoint you activated, but you’ll lose 10% of the gold you had. Unlike games like Shovel Knight, you can’t get that gold back by revisiting where you died. Banks start off only being able to hold a small amount of gold, but you can purchase upgrades to increase the amount for that town. Since death is inevitable and there were a few upgrades I wanted to purchase from the first shop, I upgraded its bank to hold 2000 gold as soon as I could, and kept it full while I gathered the rest of the gold I needed for the upgrades. 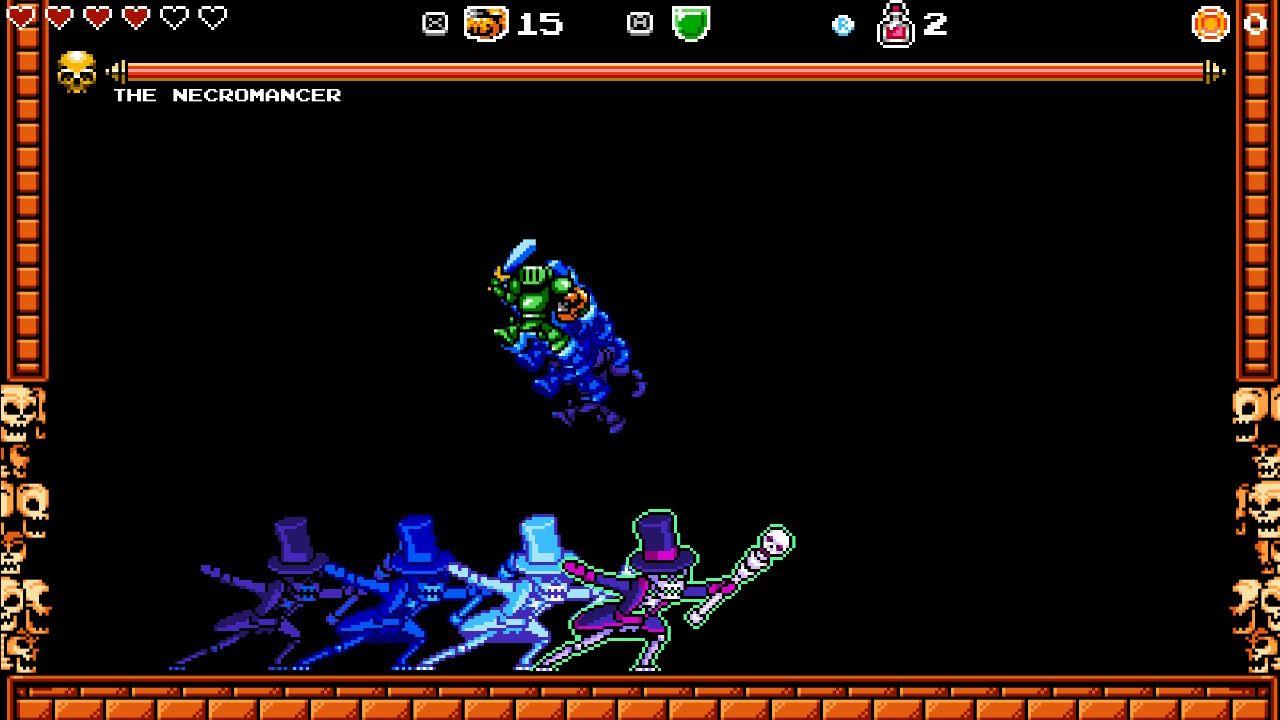 Cathedral can be rather difficult at times, even if you’re going in the right direction. Enemies typically take more than one hit to defeat, and often times they’ll get a hit in on you in the process. This often meant that you will be getting a hit or two in, then backing off while they attack, then getting in another hit or two. Usually, this isn’t too bad but there were a couple of instances when an enemy seemingly came out of nowhere to hit me, especially when moving vertically.  Early on you’ll encounter red skulls that appear and then move in your current direction.  If you’re moving upwards, you have very little time to react, and I was was caught off guard; falling to the bottom of the area, and having to climb back up.

One thing I tend to do in games is just stop and take in how a game looks and sounds.  The music in Cathedral is nice to listen to and the graphics look great. Each area has its own look to it that matches its theme; the mountains having an ice theme where everything is a bright white or blue, or an area with poison you have to avoid where everything has a purplish hue. I’ve said before that for me graphics aren’t everything, but that doesn’t mean I won’t just stop and take in how awesome a game looks. Given how often I died in the game, I had plenty of time to just stop and collect my thoughts. 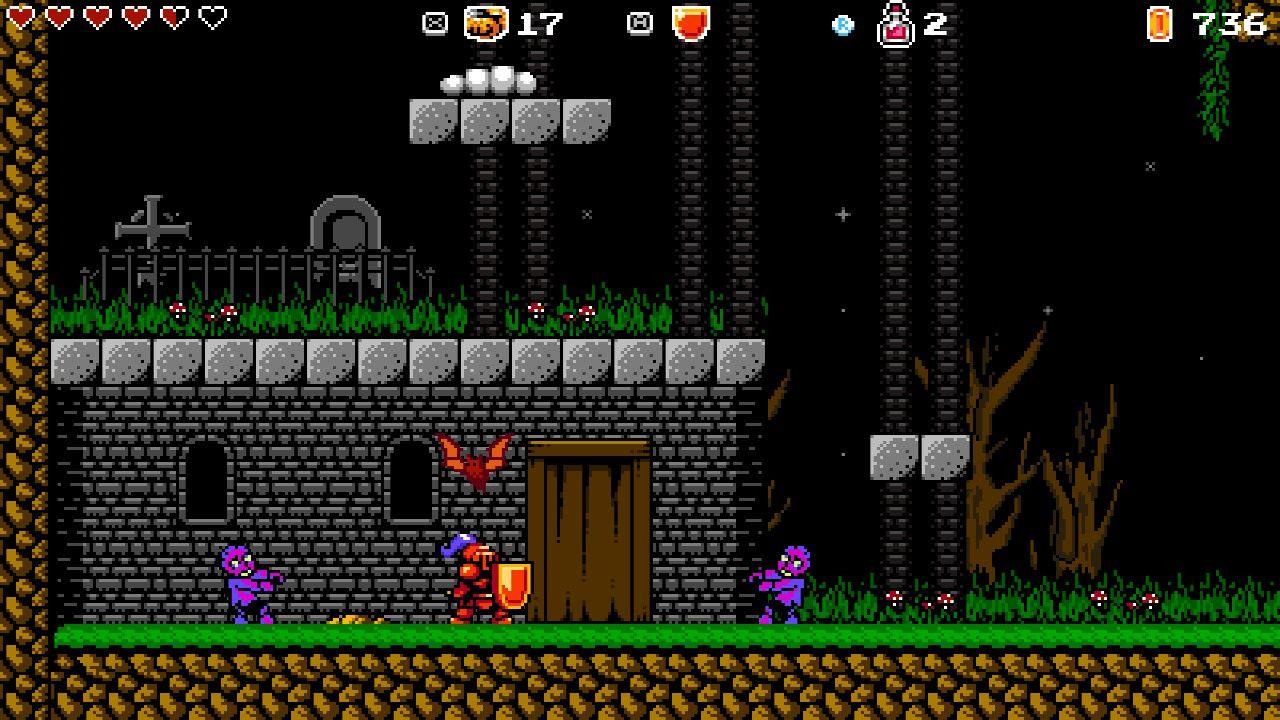 Cathedral does a pretty good job with the Metroidvania formula, and the platforming elements are solid. There’s not much that deviates from what you would expect from the genre, but sometimes that’s fine.  I enjoyed being able to explore just about anywhere I wanted and discovering for myself that an area might either be roadblocked or filled with enemies that will one-shot me - as opposed to having the game hold my hand and tell me exactly where to go. That feeling of free roaming exploration is what I enjoy about Metroidvania games. Cathedral lets you plop a note on the map to remind you to go back to an area later for whatever reason and I recommend using that feature even early on. If you enjoy Metroidvania-style games - and have a spare fifteen dollars lying around your eShop account - I’d say pick up Cathedral and give it a shot.

Cathedral is a pretty good Metroidvania-style game that can be difficult at times, though that tends to come with the genre.  That said though, the game looks great and for fifteen dollars, I’d say its definitely worth picking up.  As for me, I’ll definitely be taking another trip through the game down the road.