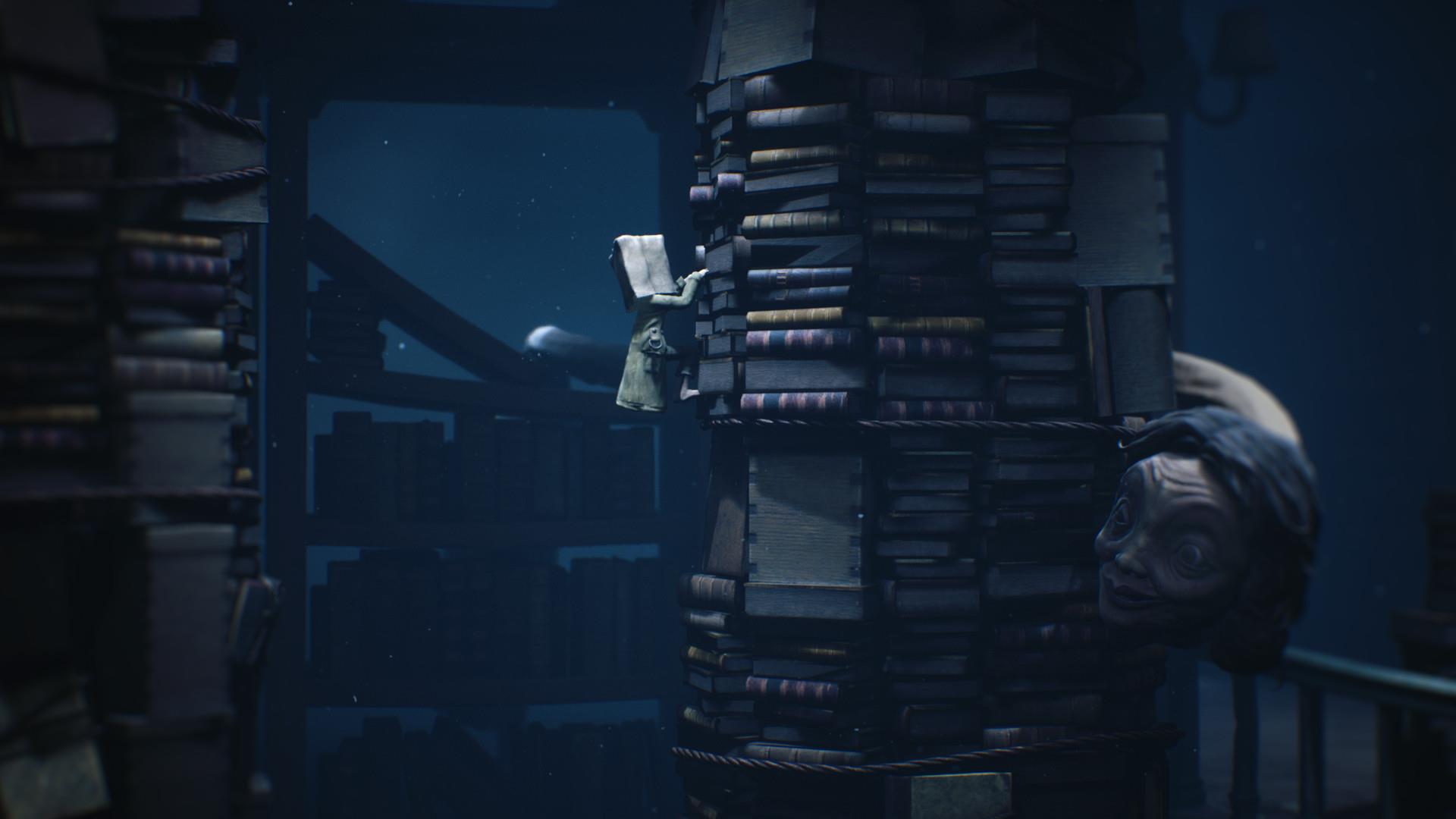 Written by Charlie Coleman on 2/24/2021 for PS4
More On: Little Nightmares II

The sequel to 2017’s nightmare-inducing puzzle-platformer Little Nightmares is familiar but grander than its predecessor. The first game took place entirely on The Maw; a ship of sorts. The sequel takes place in The Pale City; a dismal, gloomy coastal city consisting of countless looming buildings that bend and sag down like dying plants. Main protagonist of the first game, Six, along with new protagonist Mono wash up on the desolate beach of the city and must survive the grotesque horrors within. 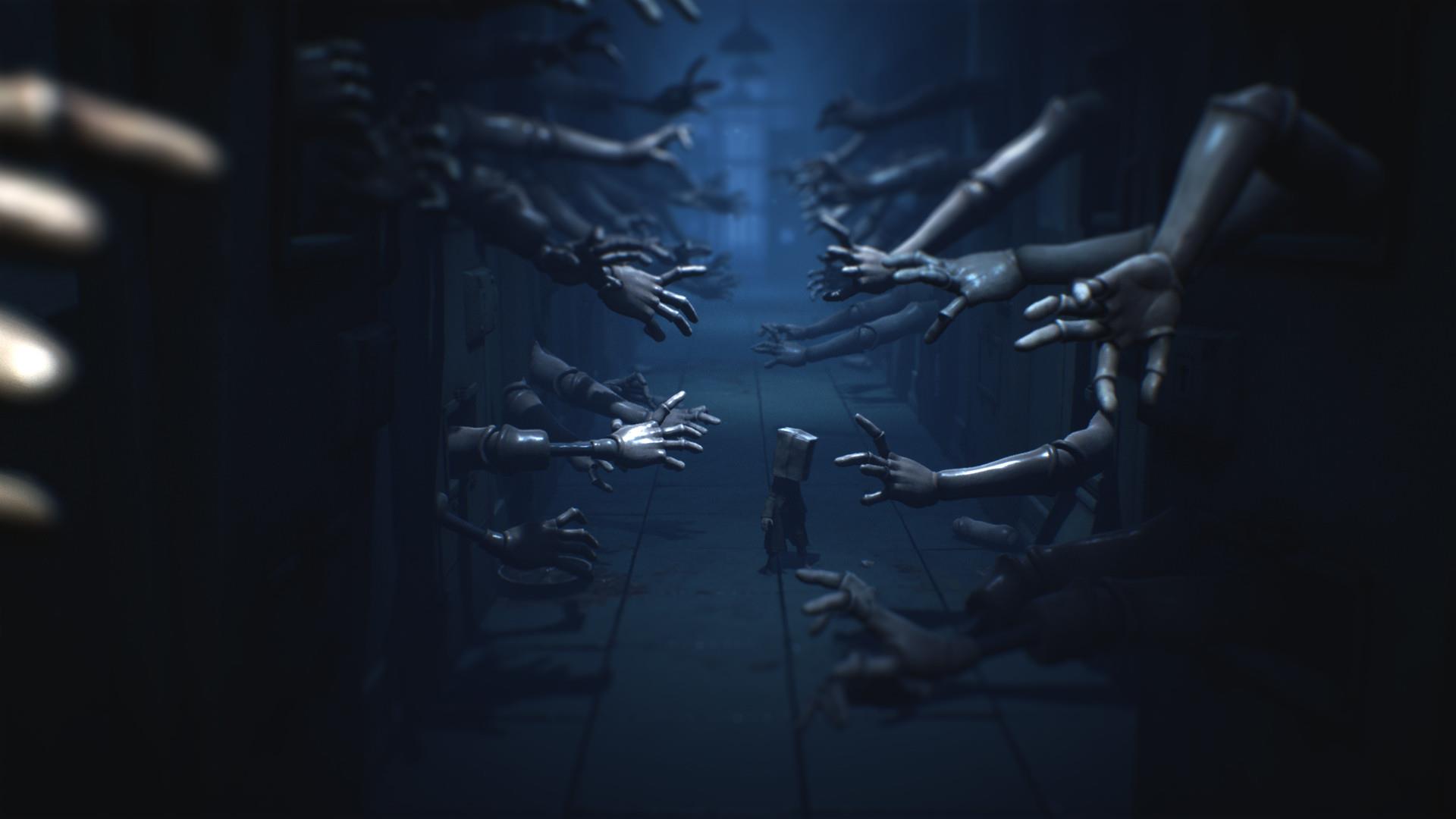 Anyone familiar with indie sensations Limbo and Inside will instantly recognize the similarities in Little Nightmares. Little Nightmares II is just as visually striking as these titles. It’s dark, unforgiving, grotesque, and it will send shivers down even the bravest of spines. It’s a transformative experience seeing everyday settings turn menacing through pint-sized eyes. It becomes apparent, however, that Little Nightmares II has matured from its more innocent predecessor. There’s still the minimal 2.5D platformer toolset consisting of running, jumping, crouching and interacting with objects. Mono, unlike Six in the first game, can temporarily wield (with a good amount of struggle) weapons such as axes.

The gameplay loop is not particularly complex, but it shouldn’t be. This loop means the player has more time to soak in the ghastly atmosphere exuded from The Pale City. The limited toolset is fitting too, taking into account our little protagonist. The addition of combat segments does, however, add a layer of gameplay that felt missing from the original. Mono, not as diminutive as Six, wields Axes and other weapons, albeit clumsily as he struggles to get them off the ground. Combat isn’t always an option, but it’s a welcome change from the first game which was an incessant game of hide-and-seek. 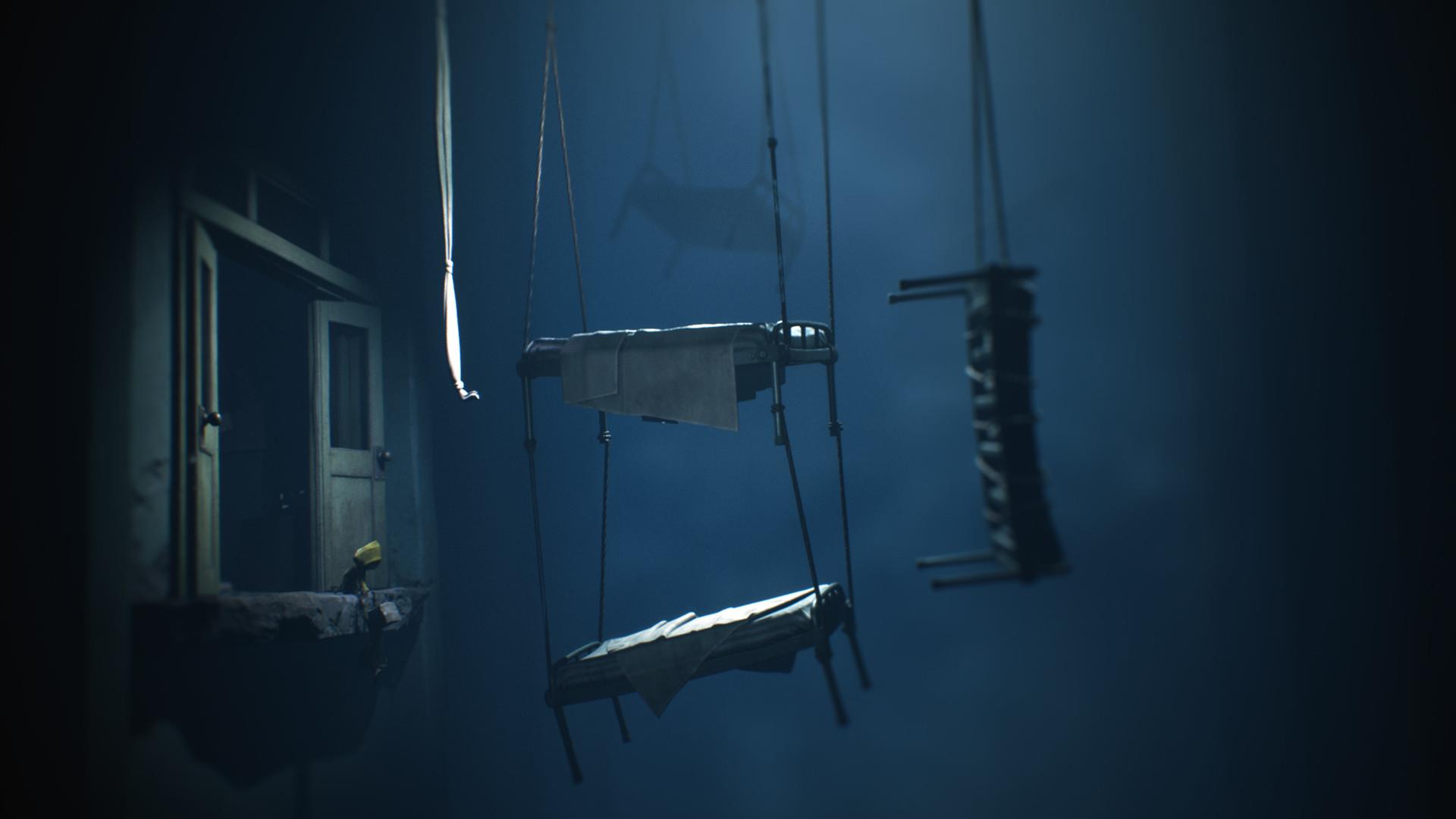 This time around, you’re not left to wade through daunting locales alone. Six, the protagonist from the first game, joins you on your journey through the city. Having Six as a companion not only introduces a more ambitious approach to puzzle design, but deepens the connection to the protagonists on an emotional level. Six makes an intelligent and tough AI companion—nobody wants to be a babysitter in this ghoulishly unforgiving world. One moment in particular, after luring an enemy into an incinerator, Six sits down and holds out her hands to enjoy the warmth of said enemy roasting alive. She’s been through a lot but damn, that was an unexpectedly chilling moment.

These new mechanics bring fresh layers to the existing gameplay loop of stealth and chases. They don’t push the old mechanics to the side; stealth is still very much the go-to option to avoid a gruesome death. “If it isn’t broke, don’t fix it,” as the saying goes, since the first game absolutely nailed that daunting dread of a thrilling game of hide-and-seek. The addition of cooperative and combat elements only enrich the experience, giving the developers more freedom in level design. Every locale makes use of stealth, combat, cooperation to defeat enemies, bosses and puzzle solving. It’s a more satisfying, complex experience than the first game as a result of these additions. 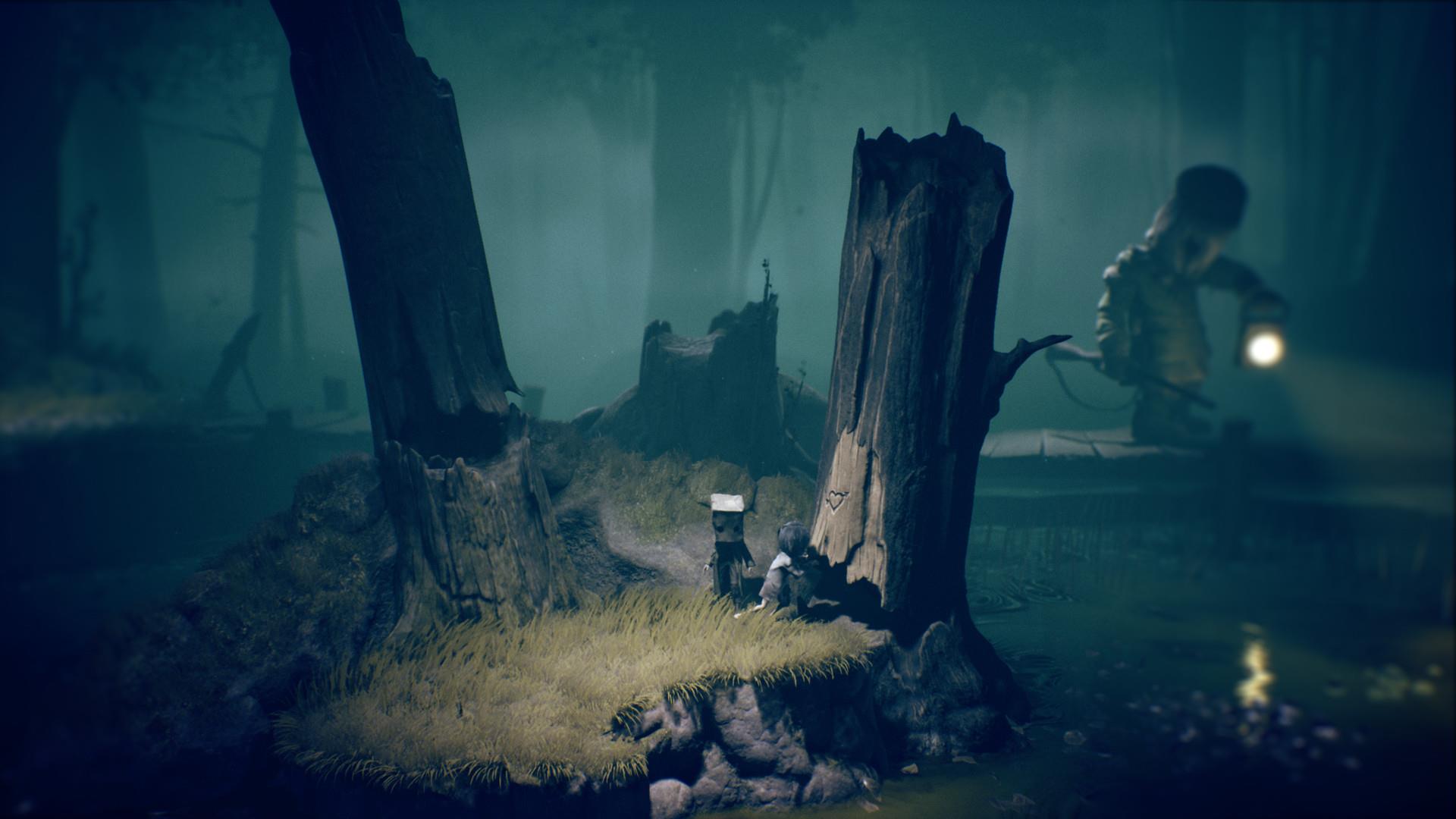 The 2.5D perspective allows for some clever trickery as your eyes might deceive you when it comes to depth. This only adds to the discombobulating feeling but can prove a slight nuisance, especially in chase sequences where even one mistake almost certainly guarantees a death. Likewise, combat controls are clumsy, and it’s completely thematically appropriate, but they, too, can end up feeling like a bit of a nuisance. On the whole, however, the controls and camera stay thematically appropriate. The resulting immersion and believability outweigh the odd grievance.

Technically, the presentation is near faultless. Ultimately, Little Nightmares II is a linear experience, a 2.5D scroller going from one sequence to the next. Within these constraints, however, there’s a level of detail and craftsmanship that’s hard to come by in large-scale games. Every nook and cranny is deliberately designed, and often hide collectibles such as hats for the protagonist to find. Every element of design just feels so precise with no part of a level overlooked. In the quieter moments, the player might soak in the ambience of the torrential rain drowning the city. It’s dark and creepy but there’s a dreamlike element to the world that makes it intoxicating. I often found myself pausing between beats to just bask in that atmosphere as I made my way to the next locale. 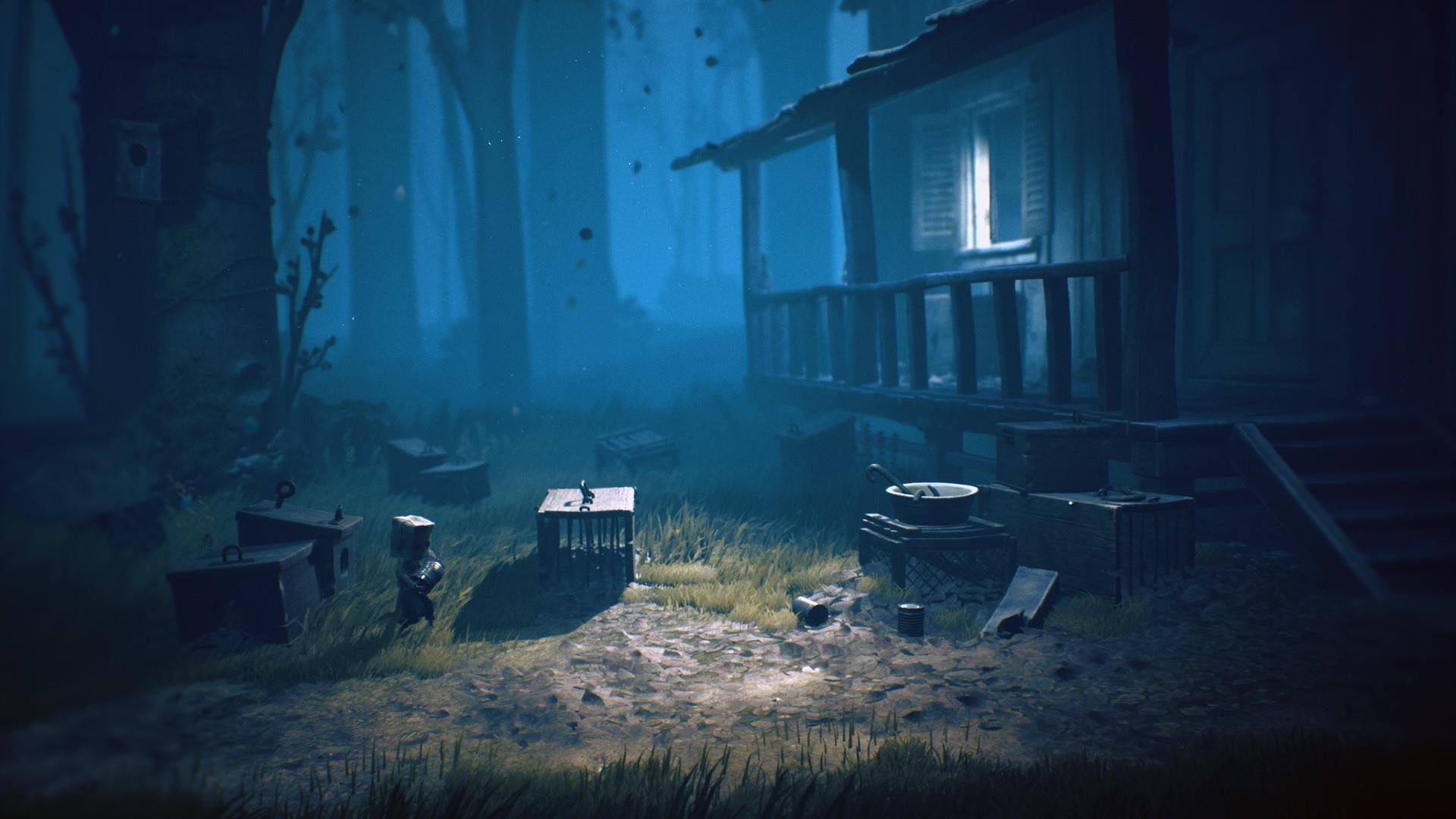 All of these visually striking moments are accompanied by a hauntingly beautiful soundtrack. There’s the calm ambient pieces that accompany the game’s more explorative moments. Conversely, nightmarish pieces dictate the tempo in chase sequences. On that note, playing with headphones is highly recommended in a game like this to fully immerse oneself. While on the topic of sound, I want to commend the remarkable job the developers, Tarsier Studios, have done in a wordless game. There’s not a single line of dialogue, but acute sounds and animations build an emotionally invested relationship between the two companions.

All in all, Little Nightmares II is simply a better game than its predecessor. As far as sequels go, that isn’t always a guarantee. New mechanics such as combat and cooperative sequences enrich the existing gameplay loop of stealth and puzzle solving. In this review, I failed to mention the ghastly locations Mono and Six must pass through. Except, I didn’t fail. I’ve restrained so that you might go into Little Nightmares II as blind as you can. It’s the fear of the unknown—not knowing what lurks behind every corner—that makes Little Nightmares II so brilliantly haunting.