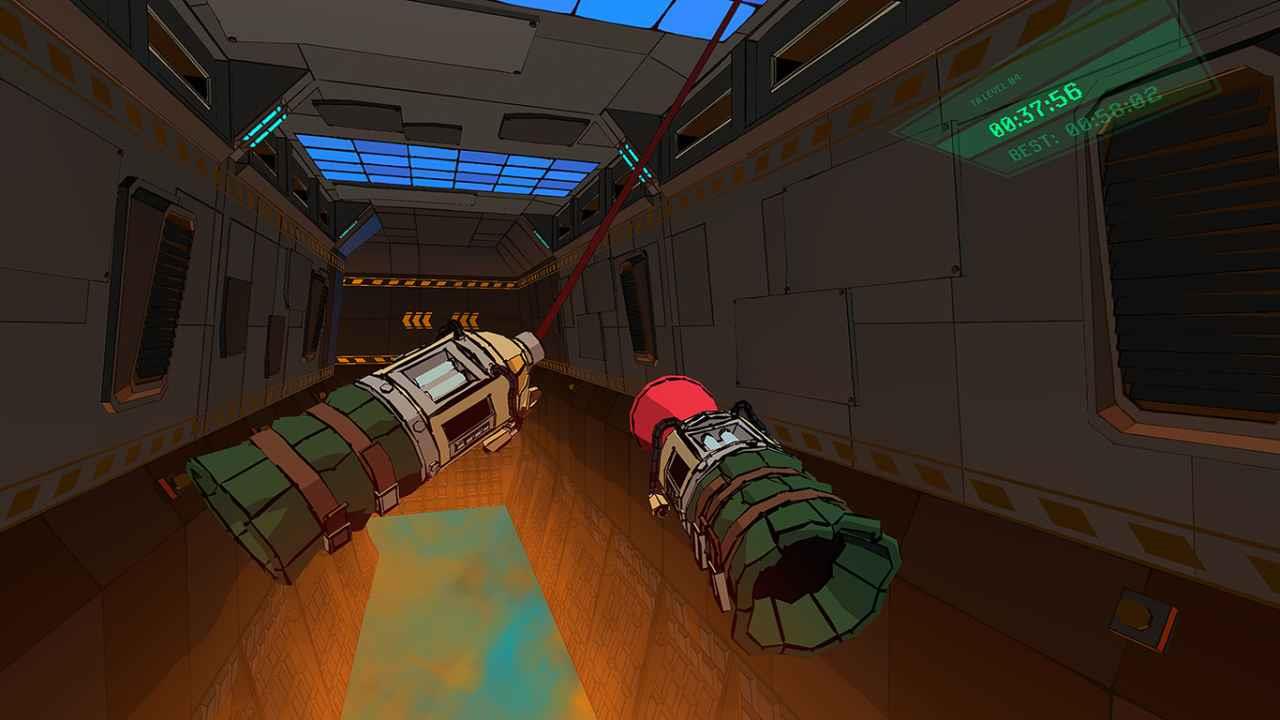 Though Yupitergrad is the first Oculus Quest game I’ve reviewed, I’ve spent hundreds – maybe thousands – of hours in VR, reviewing most of the major releases (and many lesser-known titles) on PSVR. On Sony’s VR system, I’ve played ‘em all, and through all of those experiences, I’ve only once decided that I could not review a game because the motion in VR made me feel too ill to get through it. Yupitergrad almost became the second.

It is interesting what makes one feel nauseated in VR and what doesn’t. For example – many games that use a first-person shooter-style camera make me feel wretched. But put me in control of a third-person character in the game – using the same camera – and I’ll be fine. Something about the ability to focus on the little character calms my senses right down. And some first-person games – Firewall: Zero Hour on PSVR, for example – don’t bother me a bit.

The point is that I don’t know until I get into a game whether its going to bother me or not, and the majority of the time my “VR legs” can carry me through slightly sickening experiences. I can ignore a bit of queasiness, more often than not. But Yupitergrad laid me right out. After playing through just the game’s brief tutorial, I was on the sofa with the hot water bottle, sweating and swearing up and down that I couldn’t get through the game. 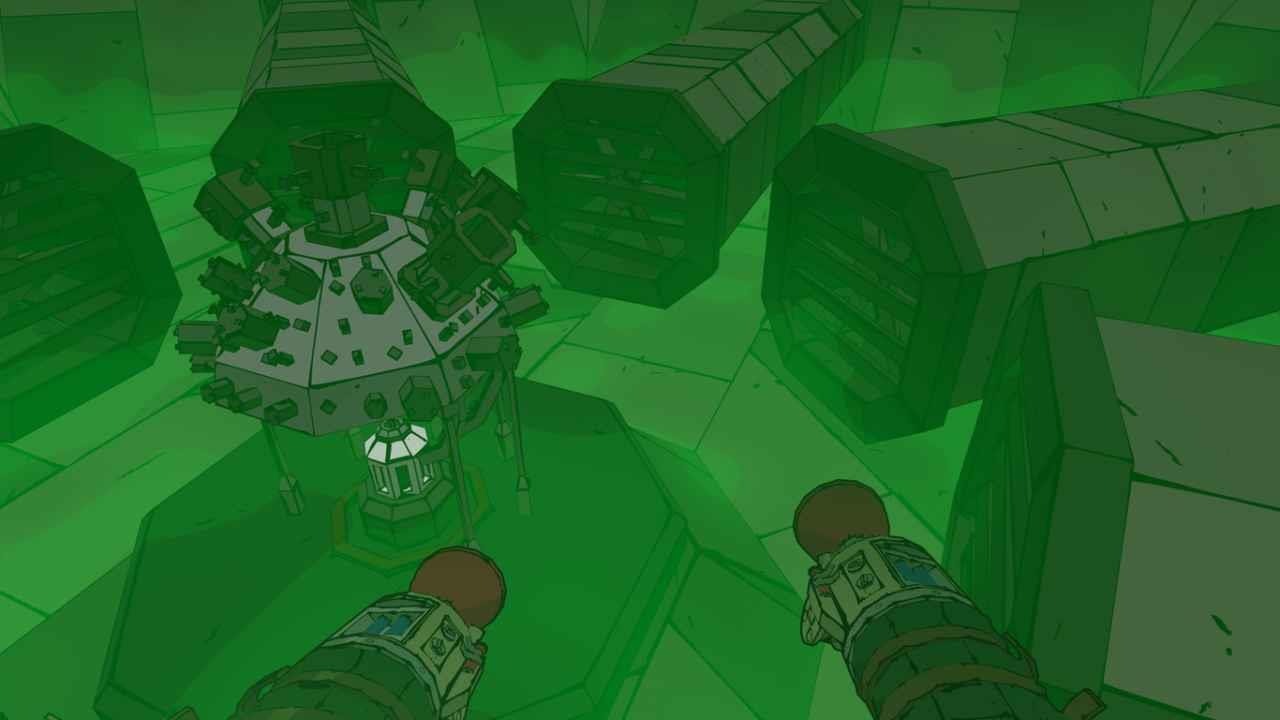 I almost called it quits right there, but I decided to give Yupitergrad another shot. I broke out the Dramamine, playing in the morning before eating anything, and splitting the 2-3 hour campaign up over a couple of days so that I could take breaks when I started feeling bad. And I made it through to the end – though I don’t think that I’ll be jumping into Yupitergrad’s new time trial mode any time soon.

In the end, it’s not Yupitergrad’s fault that my stomach couldn’t handle its web-swinging gameplay – though I do wonder if the game could have added in more comfort features beyond snap-turning. I’m never a fan of playing through a pigeon-hole reduced viewpoint, but sometimes my digestive system and equilibrium demand it. 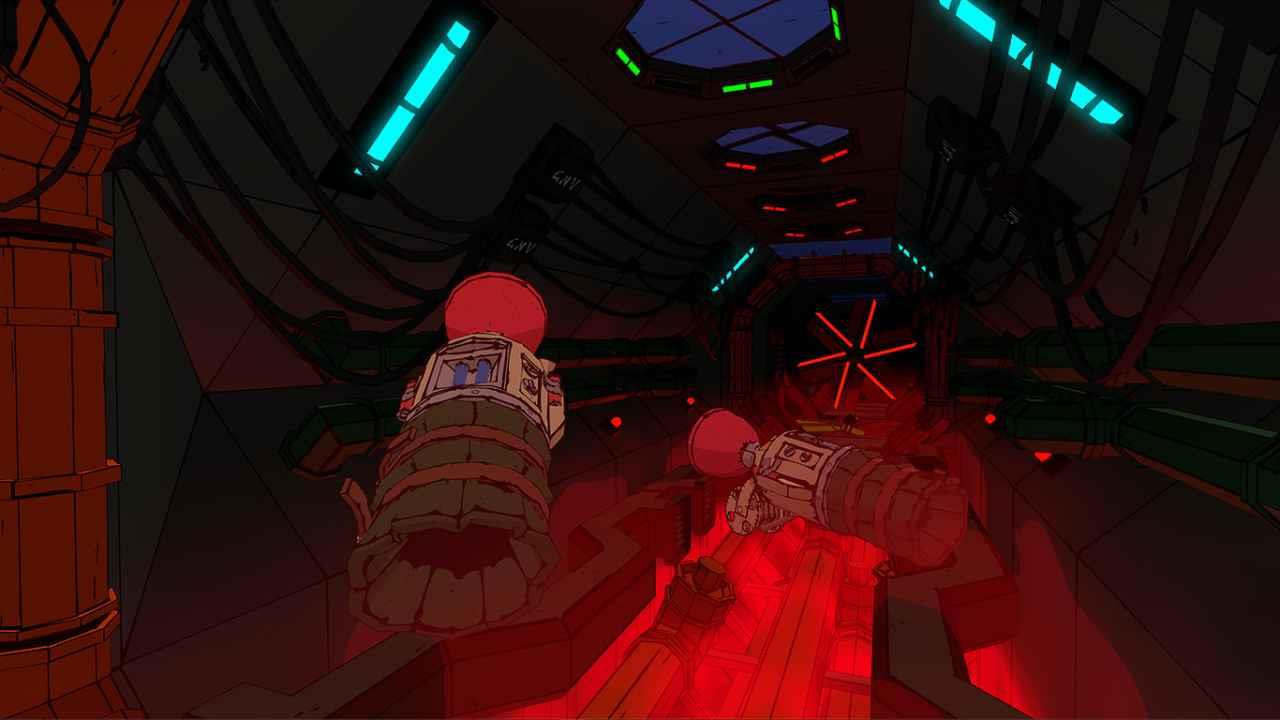 But setting aside the nausea issues, how is Yupitergrad as a game? If a VR player has nerves of steel, would I recommend taking a run through this game’s campaign? Well, maybe, if you have a high tolerance for a few other issues that might make the acid in your stomach boil.

Yupitergrad starts with a basic concept – web-swinging through a space station - and iterates on that concept in some interesting, but ultimately frustrating, ways. What starts out as almost joyous fun eventually becomes rage-inducing, as Yupitergrad asks players to pull off some super heroic maneuvers that eventually devolve into teeth-grinding difficulty. 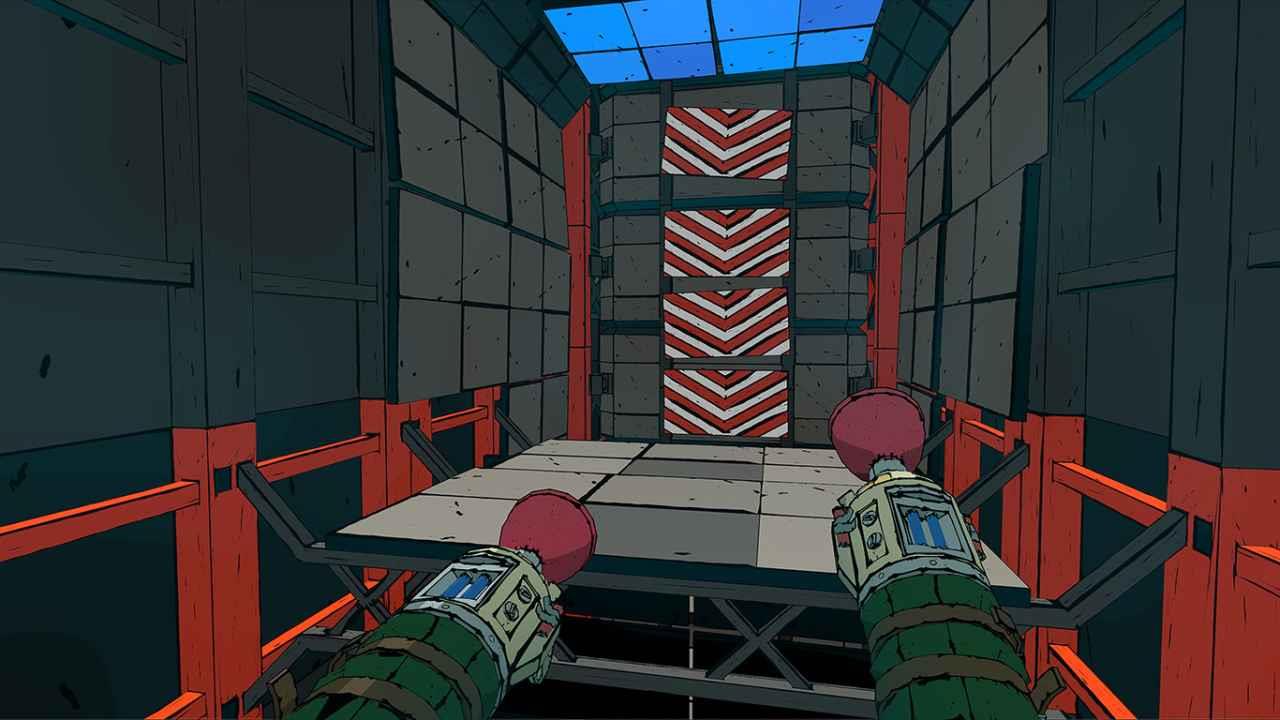 This is one of those games that is easy to pick up but hard to master. Players are equipped with a couple of arm canons with suction cups on the end of them. By simply aiming your arm and pulling a trigger, the suction cup is deployed – though it will only attach to blue surfaces. Once attached to a surface, the player can pull themselves towards it by pulling the controller away from the suction cup, relying on the elasticity of the band to pull you in the right direction.

This method of traversal is a ton of fun at first, though getting any sort of precision out of it takes a lot fo practice. The tutorial has players swinging down long hallways and into smaller holes, which can be difficult to line up and time correctly. And even after I got the hang of things, I still found myself craning my neck around a lot during story moments, struggling to make minute adjustments to my position to get a better view. Not being able to walk, the suction-cup-swinging is your only method of traversal, which can lead to some fiddly moments. I ended up shooting my suction cups at a lot of wall, just to tug myself ever so slightly into a better position. 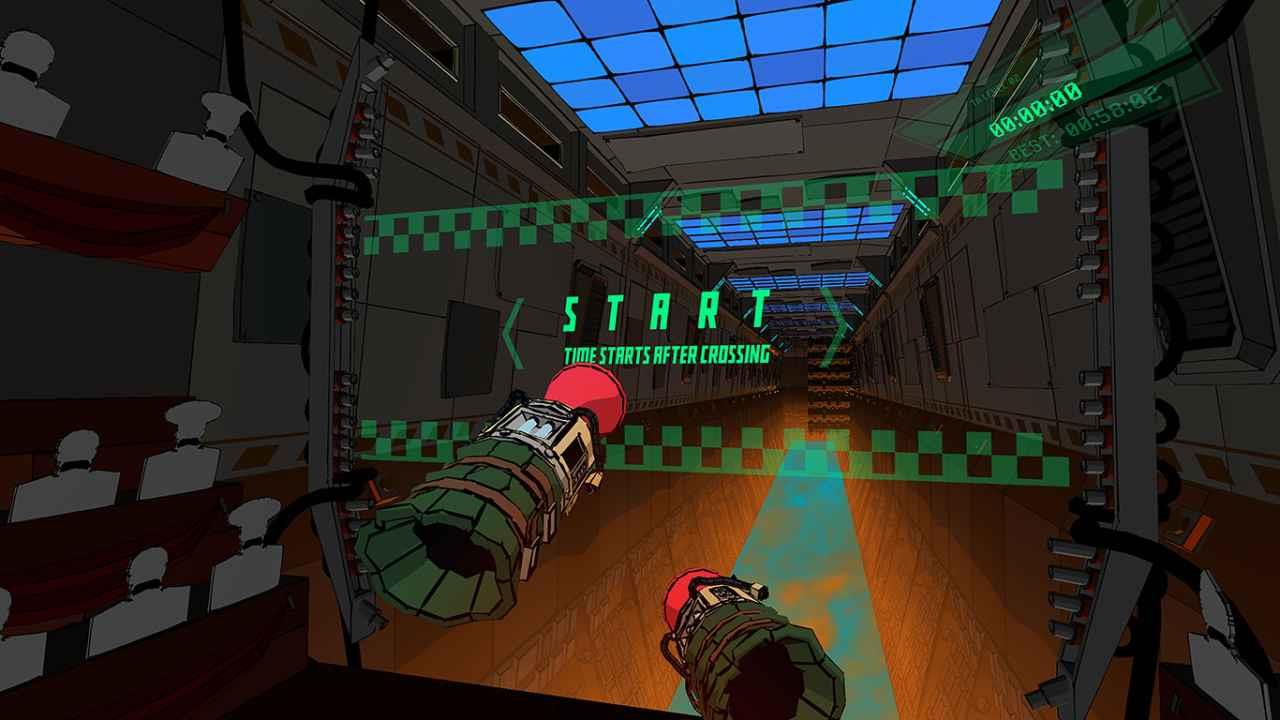 Still, once you get into the swing of things, the possibility for fun exists. “Yupitergrad” itself is an alternate-universe Soviet space station. As long-time VR players may have guessed (stop me if you’ve heard this one before), the station has been abandoned, so it is up to the player to figure out what went wrong and take steps to keep the joint afloat. I enjoyed the humorous dialogue offered by the AI assistant, who offers advice and thinly veiled criticism to the player in a deadpan, computerized voice. And Yupitergrad looks fantastic, with brightly colored cell-shaded graphics that absolutely pop in VR. Indeed, Yupitergrad plays as though it were made for the Quest 2 - and though I wouldn't recommend tossing beginners into it's comic-like corridors, it would make a great demo of the system for VR veterans.

For a time, all is well, while the player swings around the station, solving minor puzzles and pushing the story forward. But before long, the “puzzle” aspect of Yupitergrad takes hold, and that’s where the game went off the rails for me. Most of the difficulty in Yupitergrad comes not from figuring out what to do next, but rather pulling off difficult moves.

The blue panels that the suction cups can latch onto become more and more sparce, and the game starts putting slamming doors and spinny-toothy grinder things in your path, forcing the player to make tough moves in order to progress. This is fine, I guess, as the swinging is the real hook of the game. But I was already struggling to just get down a corridor correctly, so timing a swing through the jaws of death was a bit beyond my abilities. This led to a lot of repeated attempts and quietly muttered curses of frustration. It could be that I am simply terrible at Yupitergrad’s traversal system – but I found that building an entire game around this mechanic to be…tiring. 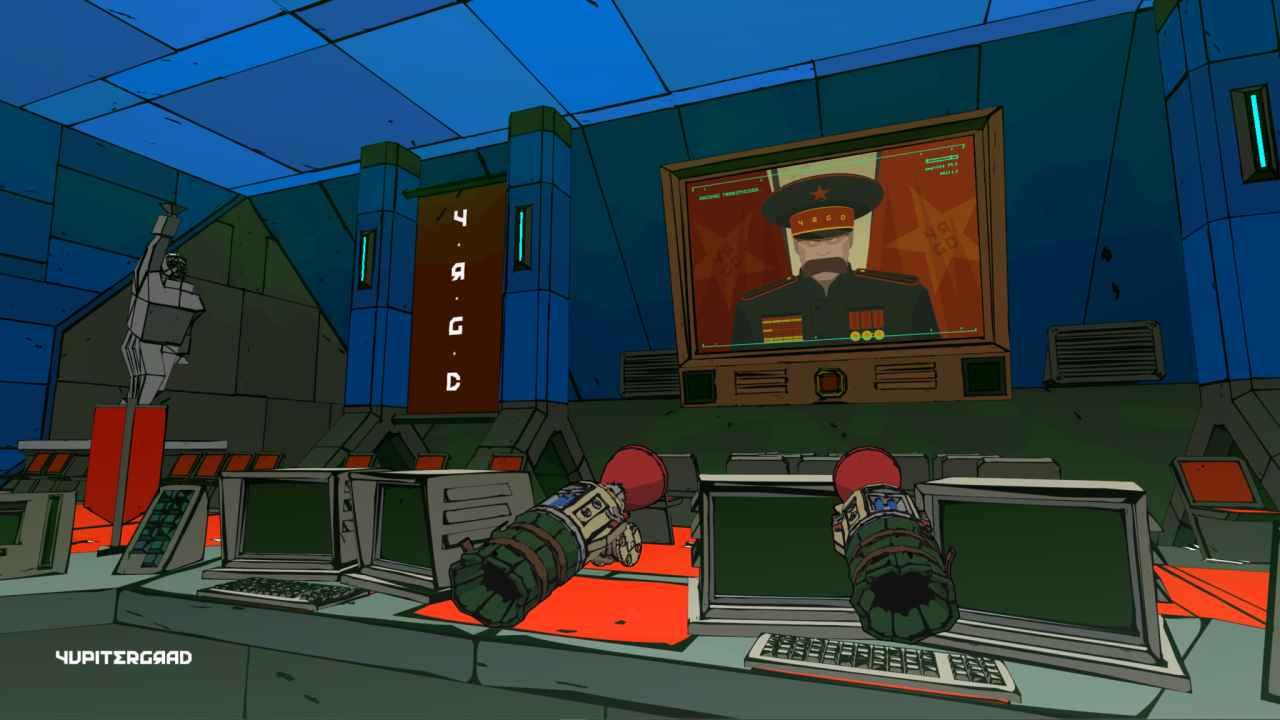 A few other sections of Yupitergrad have the player zipping around underwater, using little jets built into the suction-cup-arm thingies. I actually enjoyed these sections a bit more than the swinging, partially because they broke the game up a little, but also because they gave my beleaguered stomach a little break.

Look, every game isn’t meant for every player. That’s why we all have genres that we prefer. I am willing to concede that Yupitergrad is a well-made game – graphically and mechanically impressive – that many players will likely enjoy. And I would have been happy to tolerate the motion sickness if not for the searing difficulty. So the next time I go into a VR Soviet space station, I’m more likely to rocket to Mars in the more cerebral Red Matter than to swing back into the action-oriented Yupitergrad. My stomach – and my blood pressure – simply couldn’t tolerate a return trip.

Yupitergrad is a well-made game that I simply didn’t enjoy very much. The suction-cup based line swinging works great and is a lot of fun on its own. But trying to get through difficult sections with any sort of precision can be very challenging. For the strong-willed and strong-stomached only.