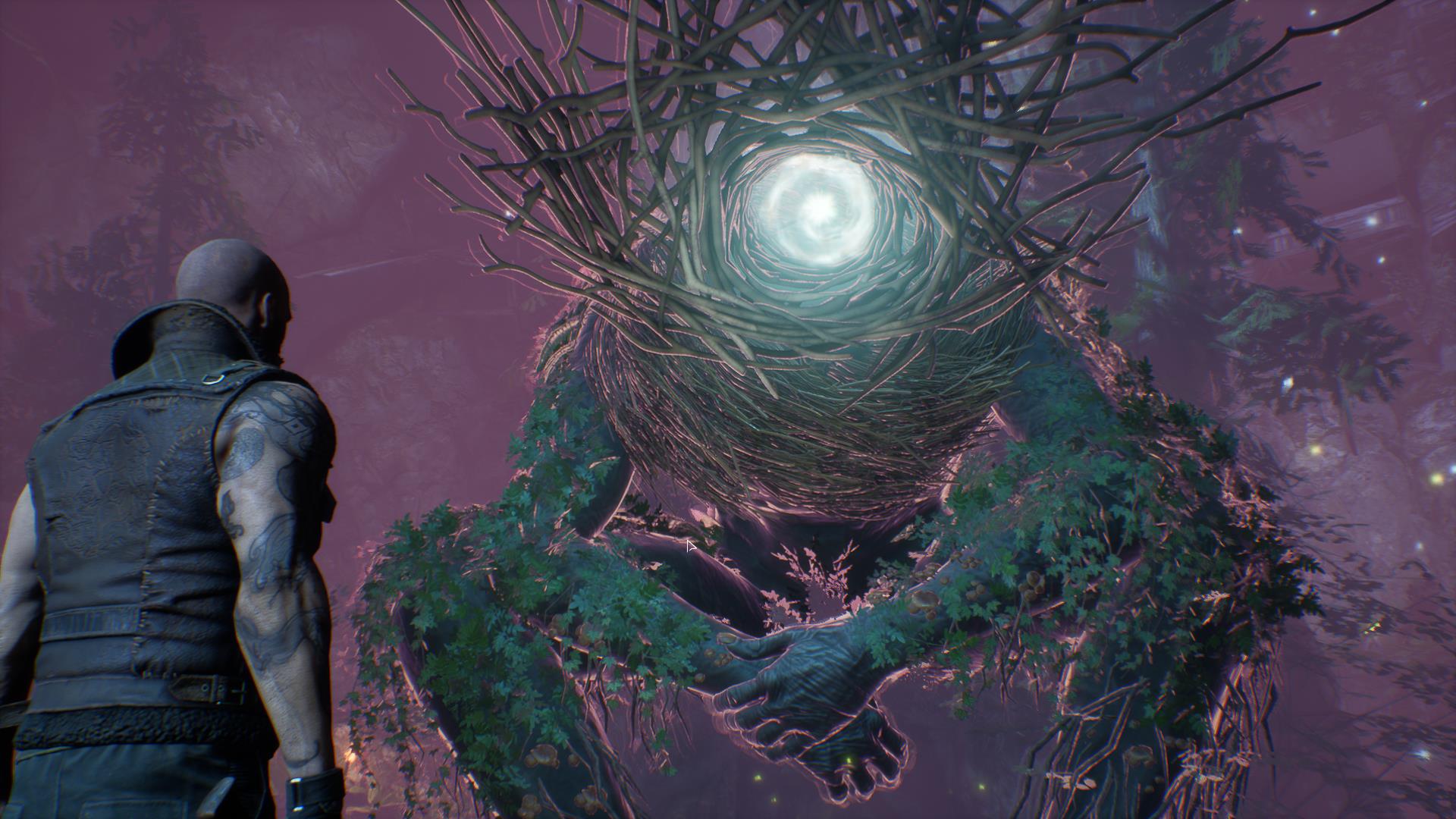 Werewolf: The Apocalypse – Earthblood has one question: Do you wanna be a werewolf and tear stuff up? My answer is: Yes I do.

Earthblood banks heavily on its rock-and-roll image. You look like a 50-something Hells Angel One-Percenter with his own prison fitness YouTube channel. You’re a dog-man that despises humans that hurt the Earth, but your own humanity recognizes that the humans doing the damage are hashtag not all humans. On top of your tatted-up badassery, you transform from Homid (man) to Lupus (wolf) to Crinos (werewolf) pretty much at will.

Correct. In a game called Werewolf: The Apocalypse – Earthblood, you should know that becoming a werewolf was always in the design document. And in keeping with its action-oriented beat ‘em up premise, you won’t have to wait for a full moon to make it happen. 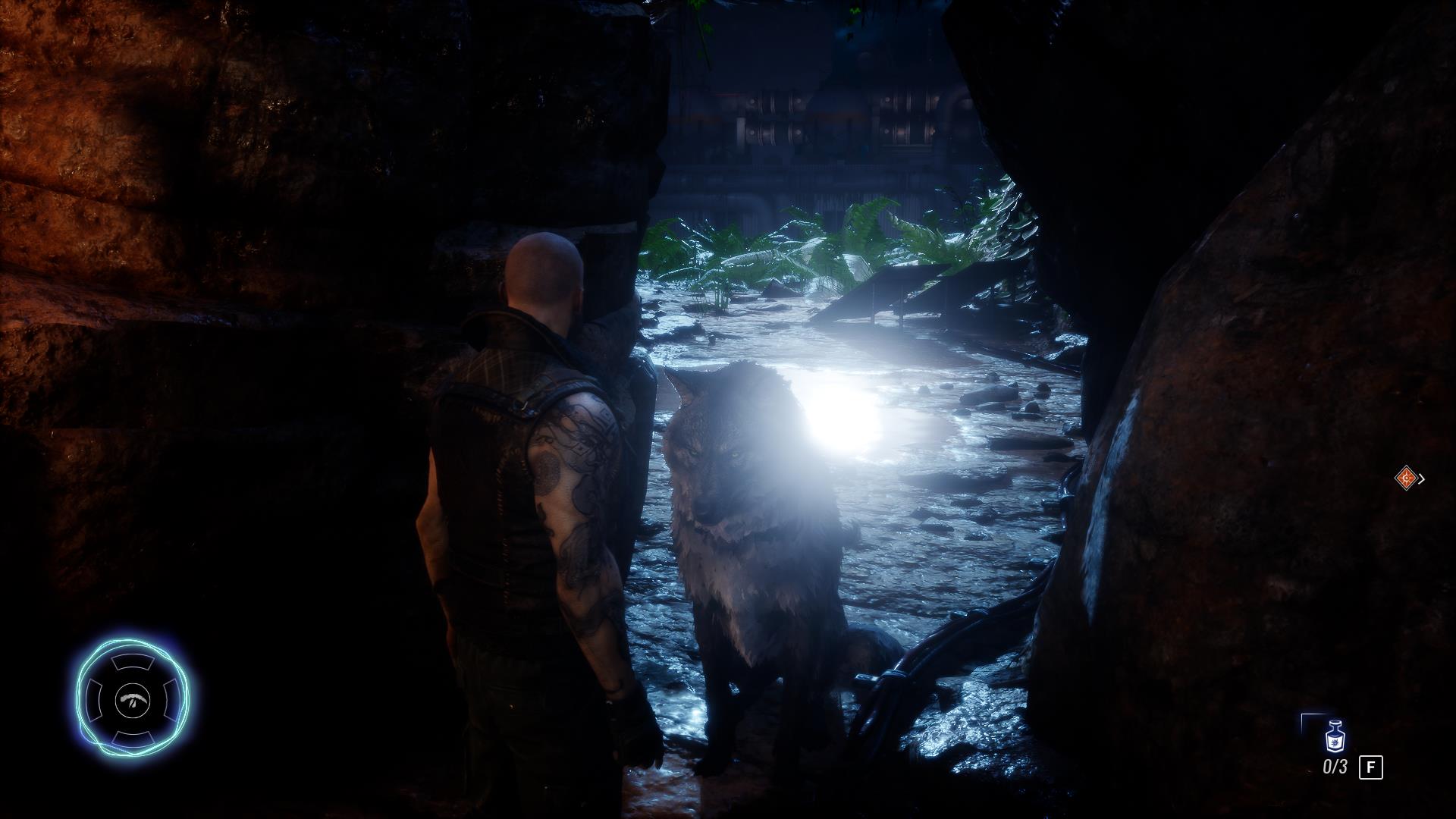 As a lupus, you'll lope around quietly, accessing nicely lit air conditioning ducts, and leaping around environments with the ease of a quadruped. As a homid, you'll snatch people from behind, sabotage security terminals, and headshot fools with your crossbow. As a werewolf, well, that's for when you absolutely, positively have to kill everybody in the room.

There’s a misfiring emotional core to Earthblood's story. There’s a father-daughter narrative that, I’ll be honest, doesn’t land on any level. Cahal, that’s the dad, and Aedanna, that’s the daughter, don’t interact any further than what’s required to push the mission structure forward. When dialogue about your daughter does come up, she’s talked about with a sense of duty more than with a grasp of fatherhood. 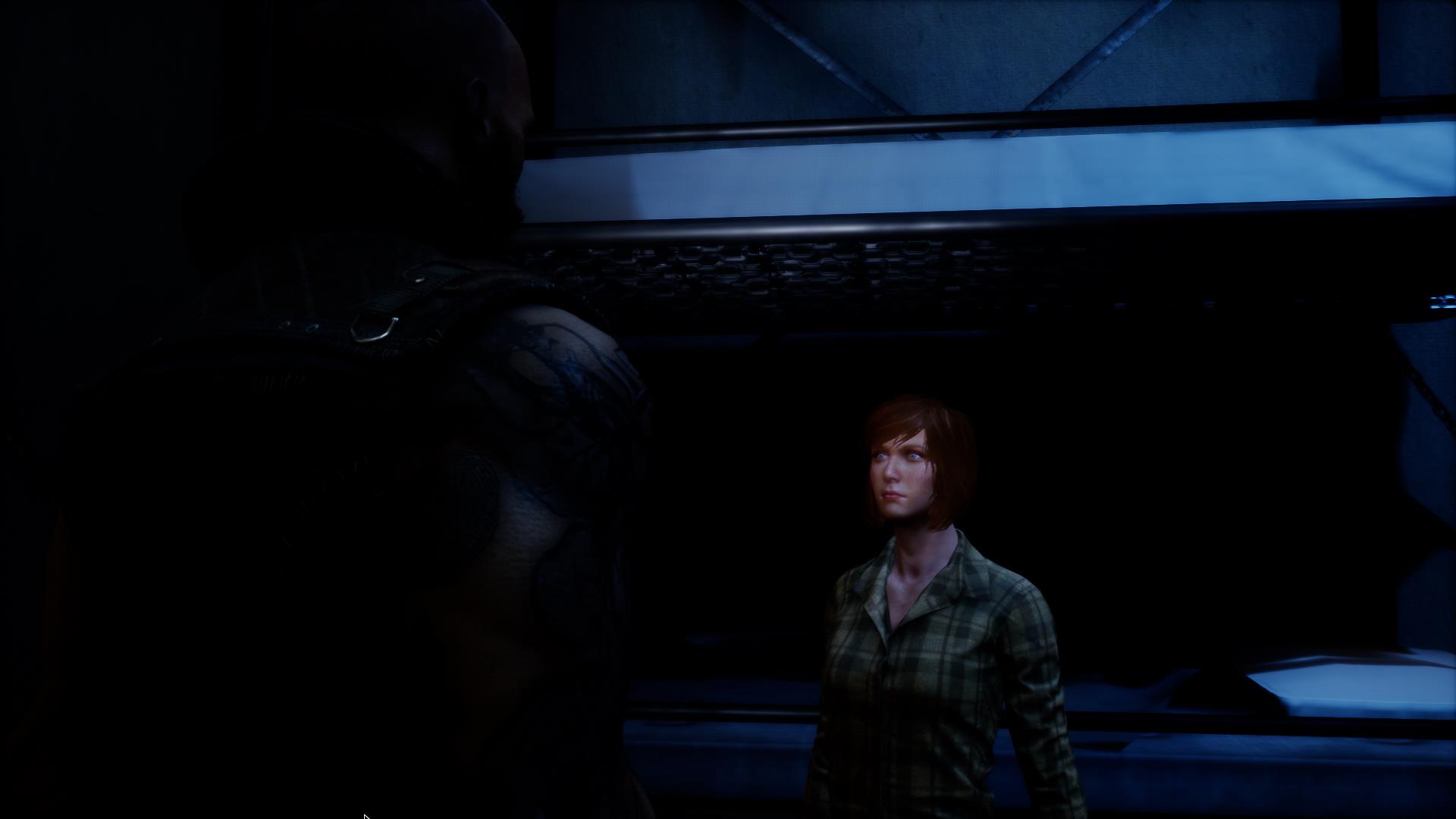 If nothing else, playing as a werewolf seems like a great way to look like a Days Gone biker gang stunt double but still worship something as Tolkien-sounding as “Mother Gaia.” At the same time, it's great to paint the whole room red with blood, then revert back to being a human, reflecting on all the carnage you’ve created. That’s when Earthblood is a good time.

Werewolf is an intentionally simple beat 'em up with lite stealth elements and an easy-to-parse skill tree. Nothing fancy. This is a budget brand, punching above its weight, and with that in mind, it sometimes delivers on its promise. That promise being: be a werewolf, break stuff, rip people in half, and learn a lot of pronouns from the source material: the World of Darkness tabletop role-playing game. 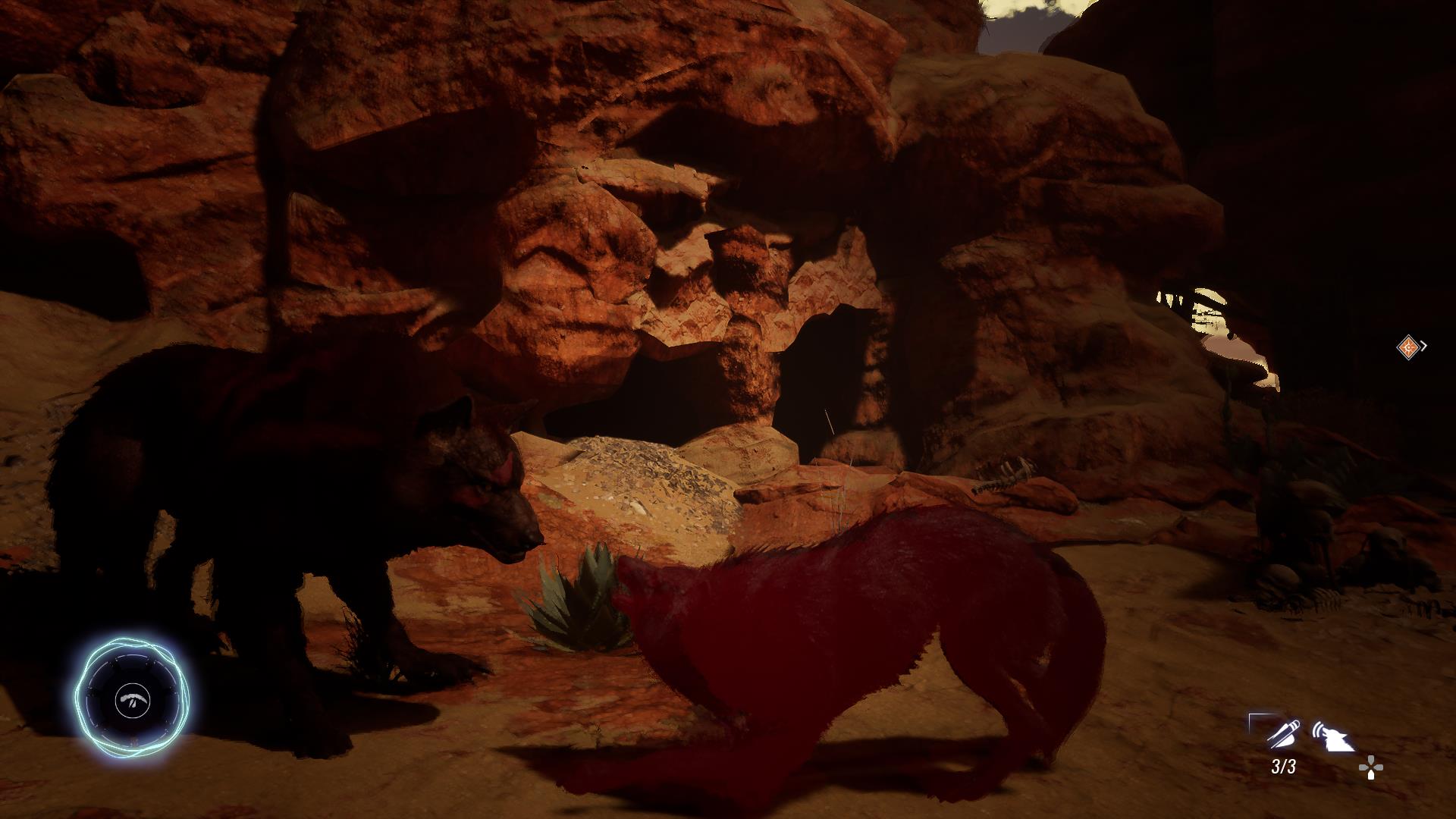 I can vouch that there’s a short gameplay loop. There's also downtime, to be sure. But when you're on a mission, you’re mostly lurking through industrial settings and laboratories with lots of square geometry, plenty of guards pacing about, where you must guess at their field of view. Then you either keep the mission on the down low, or you go in hot when you turn into a man-dog. I'm not even mad when I'm spotted and the room goes sideways. That's when I get to turn into a werewolf, of course. That's when things get good.

For an entire decade, it seems I've watched video game developers toss White Wolf Publishing’s Werewolf: The Apocalypse license back and forth—with nothing to show for it. Werewolf isn't a completely unpopular tabletop role-playing game, but it doesn’t fill the shelves like Dungeons & Dragons, Warhammer, or even its sister publication, Vampire: The Masquerade, all seem to do. When it comes to RPGs, both in hobby shops and video game stores, werewolves get short shrift. 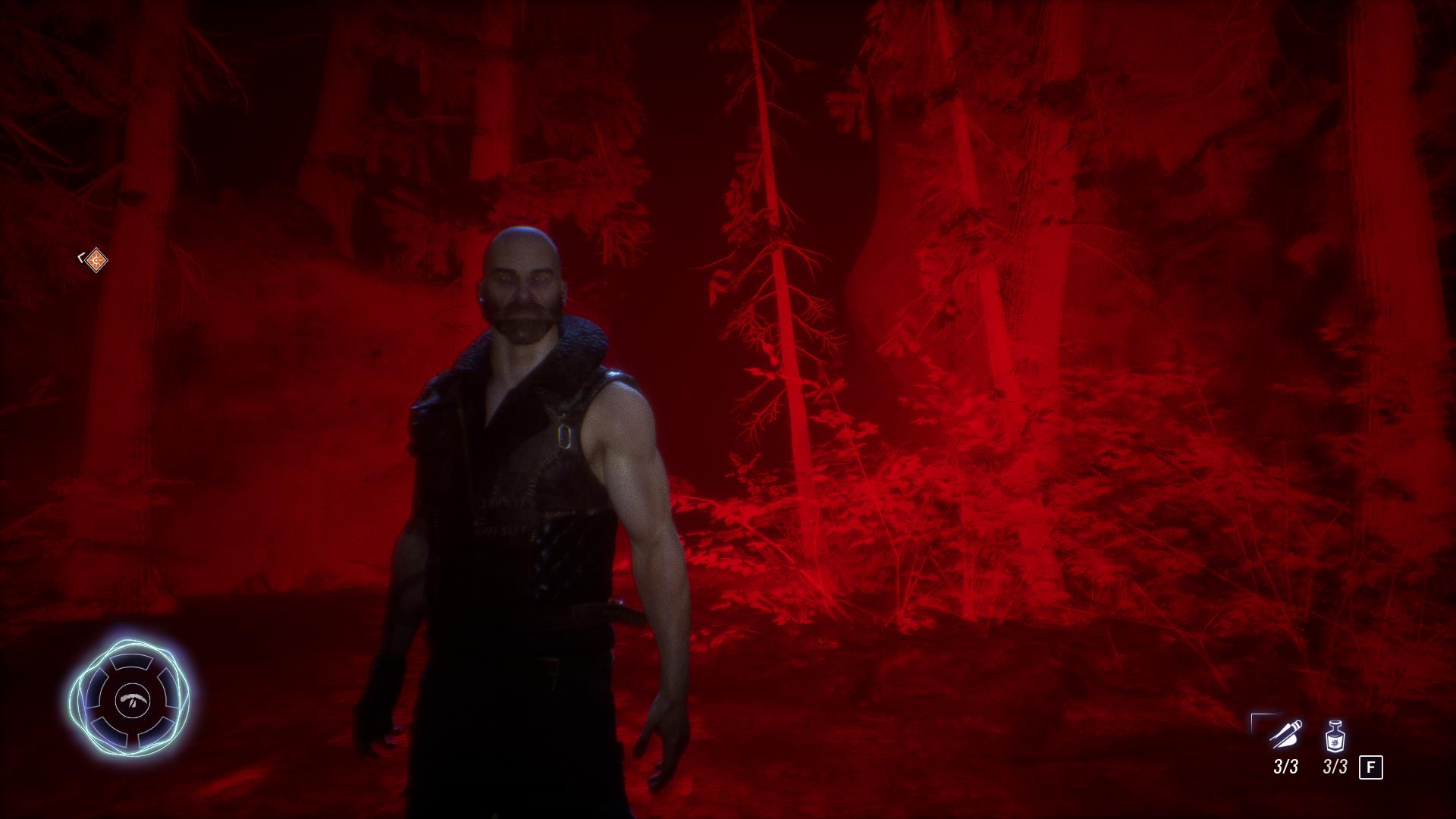 So it’s not Earthblood’s fault that it’s starting from a deficit. Unless your name is Altered Beast or The Elder Scrolls Bloodmoon DLC, werewolves don't get a lot of play in video games anyway. But Earthblood punches you in the shoulder and says, “You’ve heard of werewolves, right? You know, full moons, shredded clothes, vulnerable to silver bullets?” Then in a more conspiratorial tone it asks again, “Wouldn’t it be fun to be one?”

Again, yeah. Being a werewolf sounds fun. Earthblood even hits me with a dose of canine adrenaline on occasion. But other times, it’s got me going to bed early, sleepy, feeling self-conscious that I’m missing something. It’s a B-game. I get that. You can see the red pen marking up the developer’s budget-constraints spreadsheets. That doesn't give it a free pass. But also, Cyanide Studio isn't competing against the thousands of people that make Ubisoft, EA, or Rockstar games. It's weird that there's a part of me that wants to pit Cyanide against those big dogs. That tells you that there's something at the core of this game that really works. It also works to this game's disadvantage, because Earthblood won't live up to those lofty expectations. 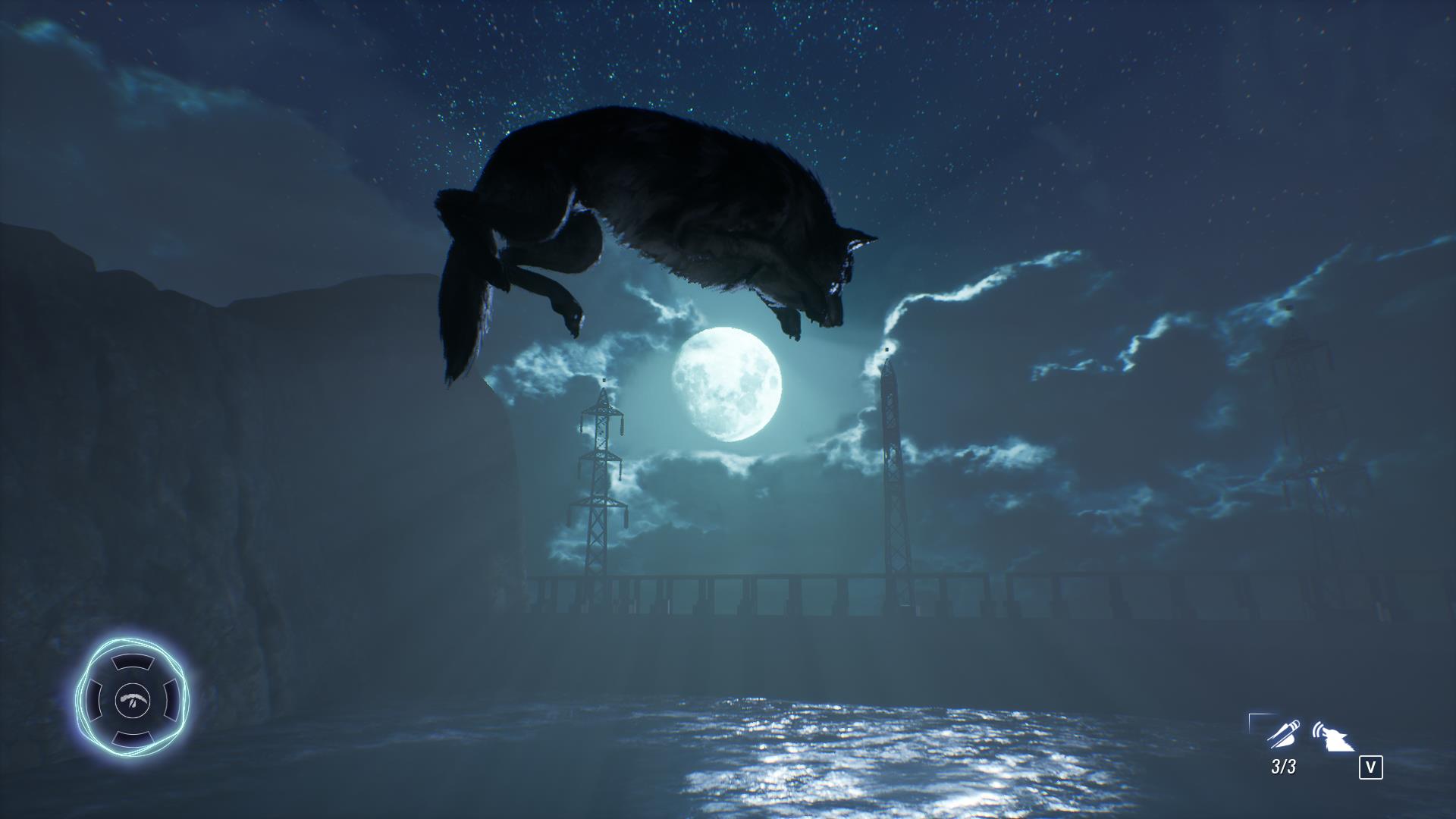 That, however, helps Earthblood execute solidly on its lowest promises: to put a player in small, stealthy arenas, let them get a few stealth takedowns, then transform them into the ultimate eco-warrior so they can mop the floor with some Big Oil jerkoffs.

Your enemy is Endron, not at all based on real-world bad guys Enron, wink wink. Enron, the real-world natural gas company, went through an enormous accounting scandal about 20 years ago. Endron, the in-game oil fracking company, is getting into some funky gene-modification business. It’s ugly. It eventually starts turning people’s heads into tentacles. Destroying the planet is Endron’s normal “Haha! Business!” routine. Turning humans into Lovecraftian soldiers is the kicker. 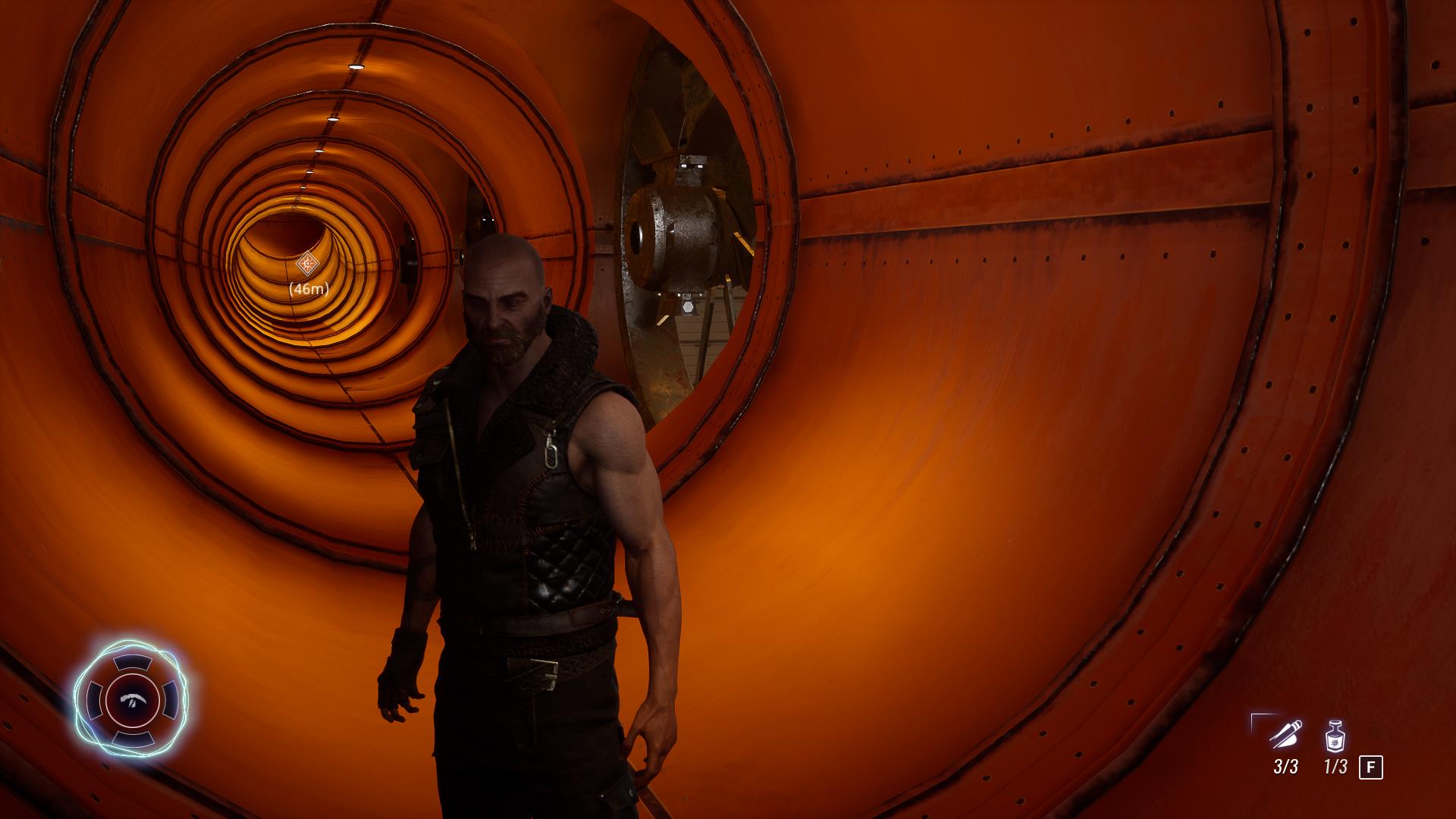 There are some ham-fisted philosophical ponderings. Like the guards that have “sold their souls to Endron,” therefore deserving no mercy. But whether you’re declaring werewolves to be “the vindication of Gaia,” or you’re reconnecting with your estranged daughter, or even if you’re just receiving directions to the nearest security laptop, every line is delivered with the verve and panache of central casting. The voice actors aren't acting. They're just reading.

You can feel the B-game-ness throughout. Like it’s running on an evolution of the engine that made games like 50 Cent: Blood on the Sand. Your dude moves like he’s on a fast-action Roomba. Your daughter’s character model is just a downsized adult—although there may be a metaphor somewhere in there. And bringing up that 50 Cent game wasn’t a mistake. Earthblood feels like it’s also from circa 2010. If this game was 10 years old, it’d be a cult classic. If it was 20 years old, it would’ve made a game of the year list or two. 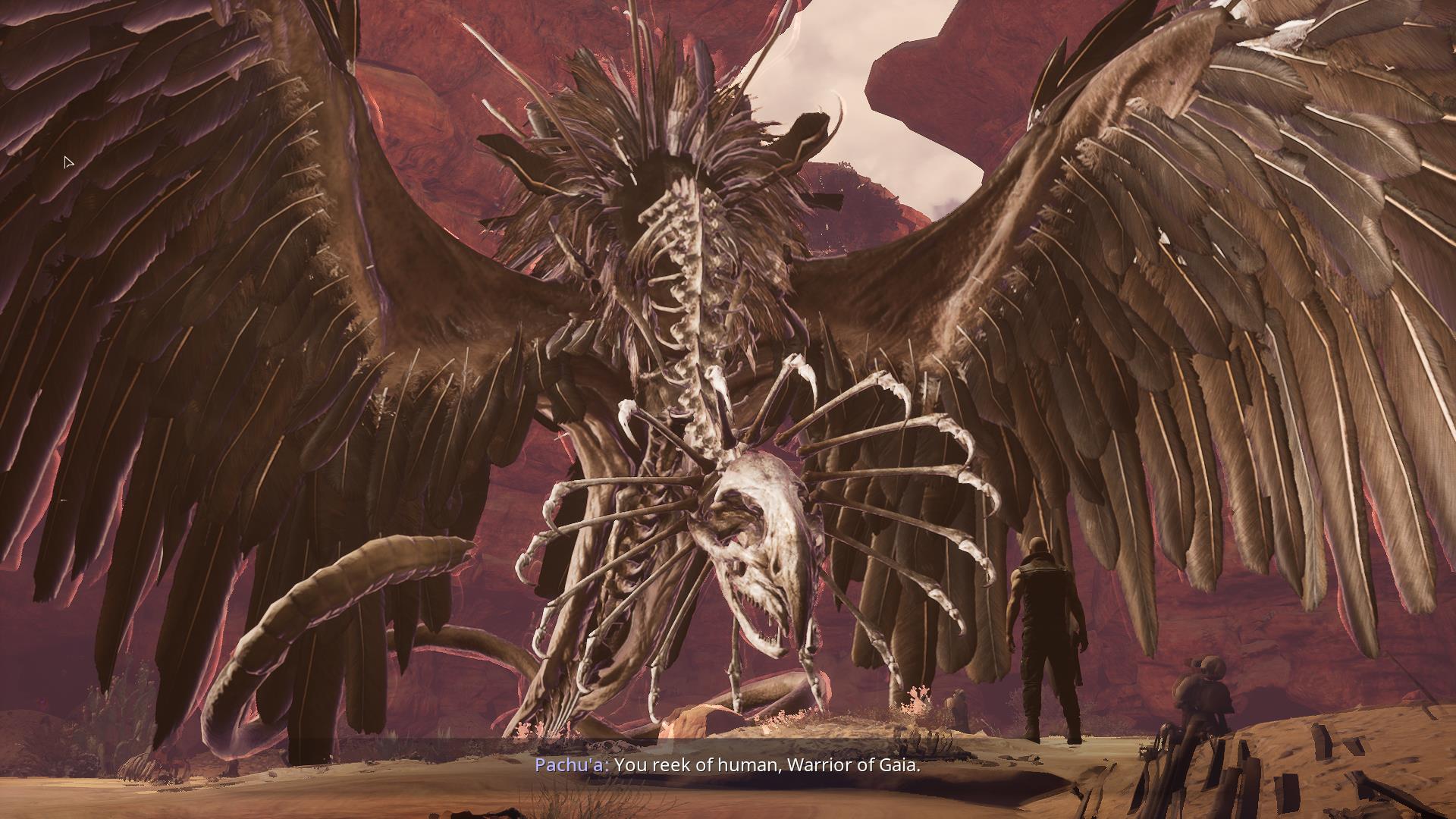 Interactions are similarly primitive. Guards stand stock still or walk short, rigid routes. You read dryly written journal pages and emails scattered around rooms. Sometimes, though, you commune with a spirit with a bird nest for a head. Or with a giant buzzard skeleton the size of the Georgia Dome. Those fellas are kinda cool. But you don't necessarily react to them with any more awe and reverence than you'd give lookalike NPC #3849654.

Be prepared for a lot of nouns, too. “Once one of the proudest of the Garou Tribes, the White Howlers abandon their name and their valor to become the Black Spiral Dancers, the Wolves of the Wyrm.” I can appreciate that behind-the-curtain depth, though. The fighting is fast and fun and frantic. The stealth is maybe rote and stiff but serviceable. And the developers couldn’t lift any drama off the page when it came to the talky parts or the texty parts. But there is world building back there. It's just presented in this bland layer cake of expository dialogue, monotone emails, and tiring cutscenes. 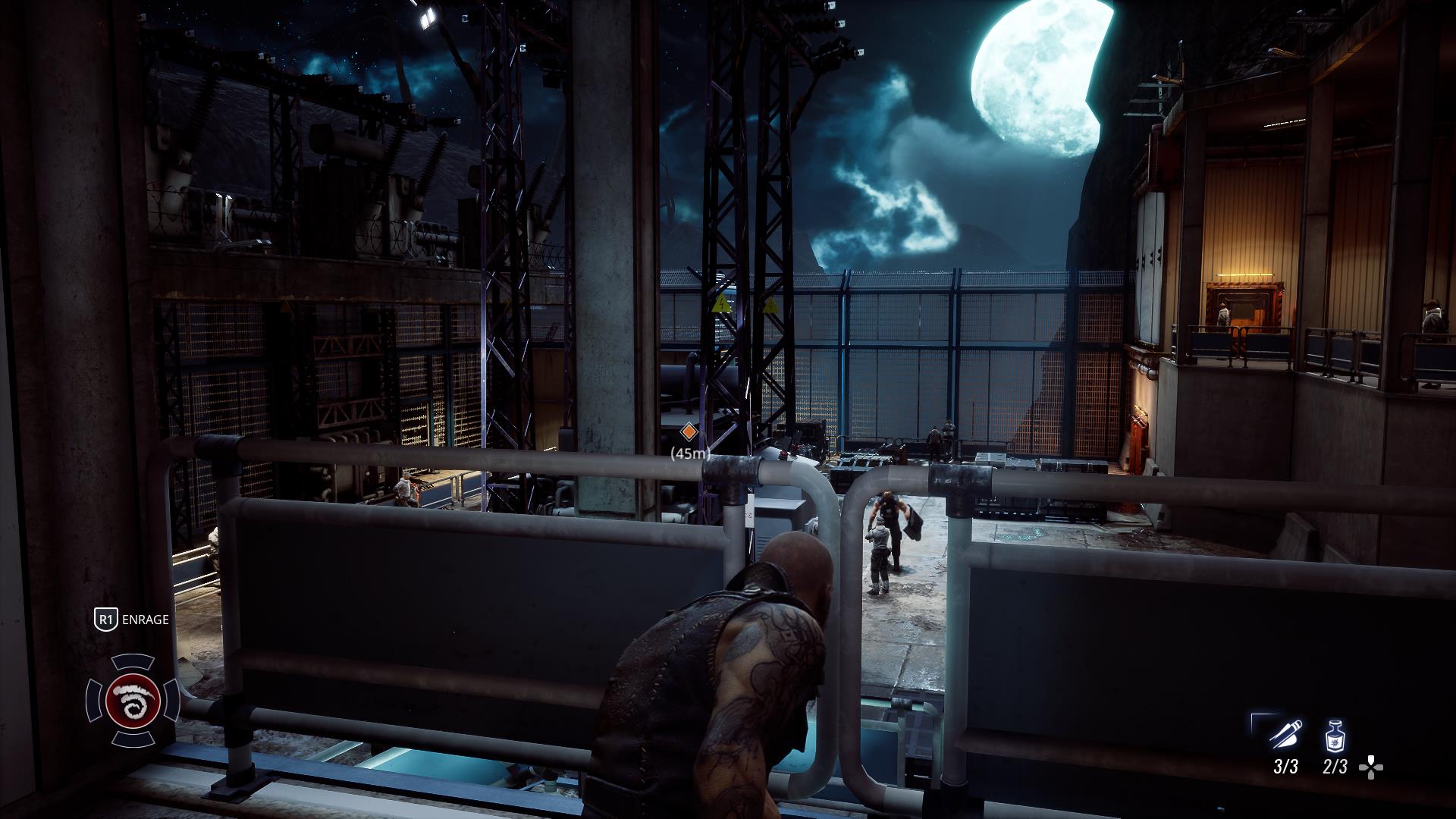 Earthblood starts off in the great Pacific Northwest. Washington State. Near to my home and dear to my heart. None of the environments, however, look familiar or unfamiliar. They’re just cobbled together. They sometimes look like the artists were just drawing from memory. Earthblood can feasibly run on any system you throw it at, but there’s nothing striking or memorable about the places you’ll visit. In fact, major set changes look like reskins of one another.

There’s a comforting slash, rinse, repeat ebb and flow to the combat, though, and that's what I keep coming back to. Quietly taking enemies out one by one is satisfying, but going into a frenzy and taking enemies out by the handful is even better. It’s good when you can turn a wave of enemies into a puddle of strawberry jam, then do it again when you hear a buzzer and they send in reinforcements. It just works. 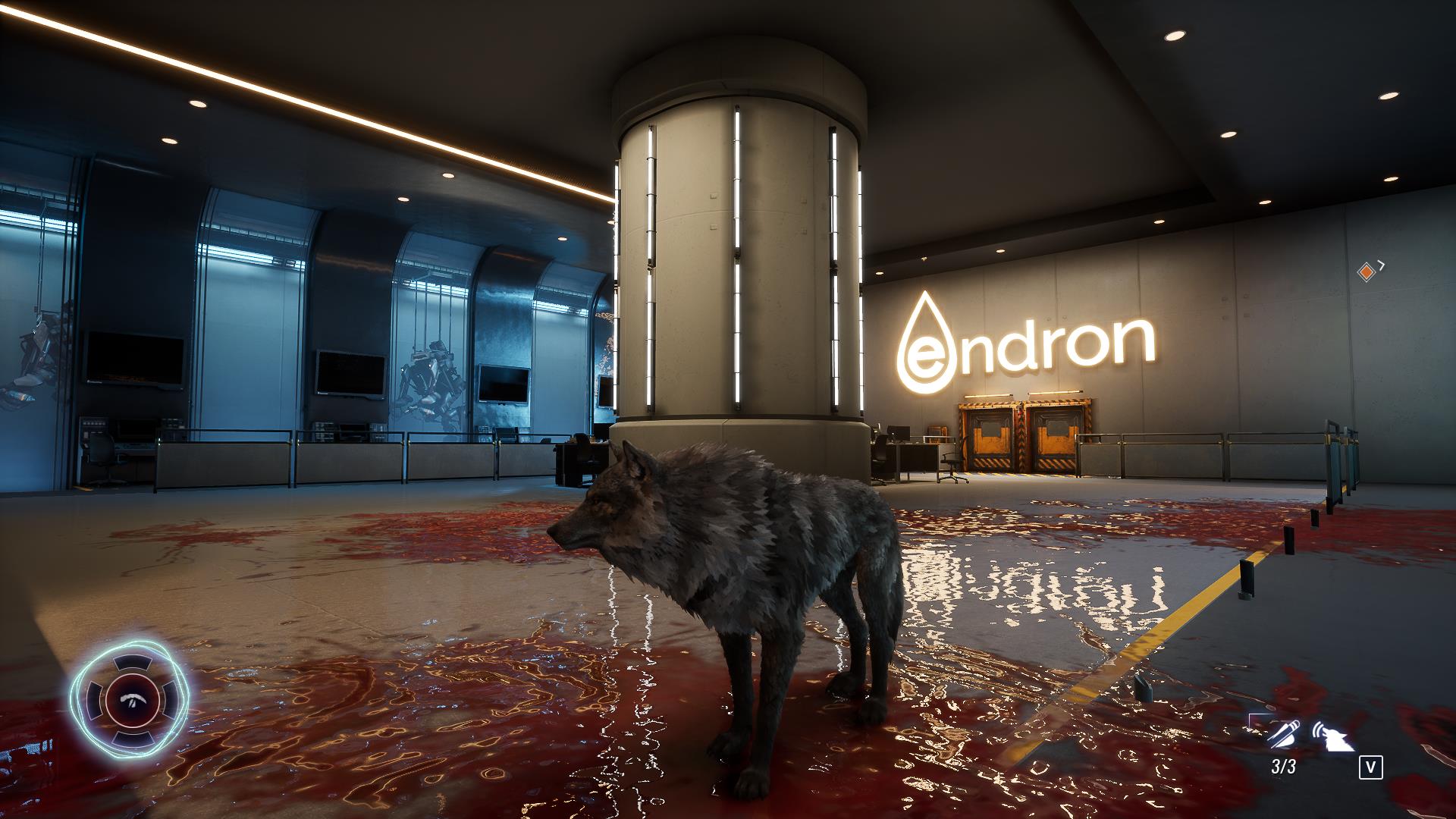 I’m sure you’re also aware, the game says, that werewolves have rage issues. They’re just angry little things. The howling. The clawing. The righteous beards. This here? This is all power fantasy. You’ll barely have to look at your health bar. You’re just going to mash the attack buttons, and if the camera could keep up with you, that might’ve been enough to carry me to the end credits. Might have.

I can’t help but want to cheer for Werewolf: The Apocalypse – Earthblood. It’s not trying to be the next AAA superstar. But it is trying to make room for itself in the B-game space. It’s perhaps a little strange how seriously it takes itself. I feel like Earthblood could have, and should have, leaned harder into its inherent weirdness, but it doesn’t. That would’ve been the braver choice, and let Earthblood in on its own joke. Werewolves don't get much play in video games. But at least the combat here is dumb fun, and that's all this game needed to be.

Werewolf is firing on all cylinders when it lets you take on a wave of enemies, turning them all into puddles of jam. You don't have to think too much about the gameplay, and that gradually becomes a good thing. If this came out 20 years ago, I'd be thinking about it more during end-of-the-year talks.