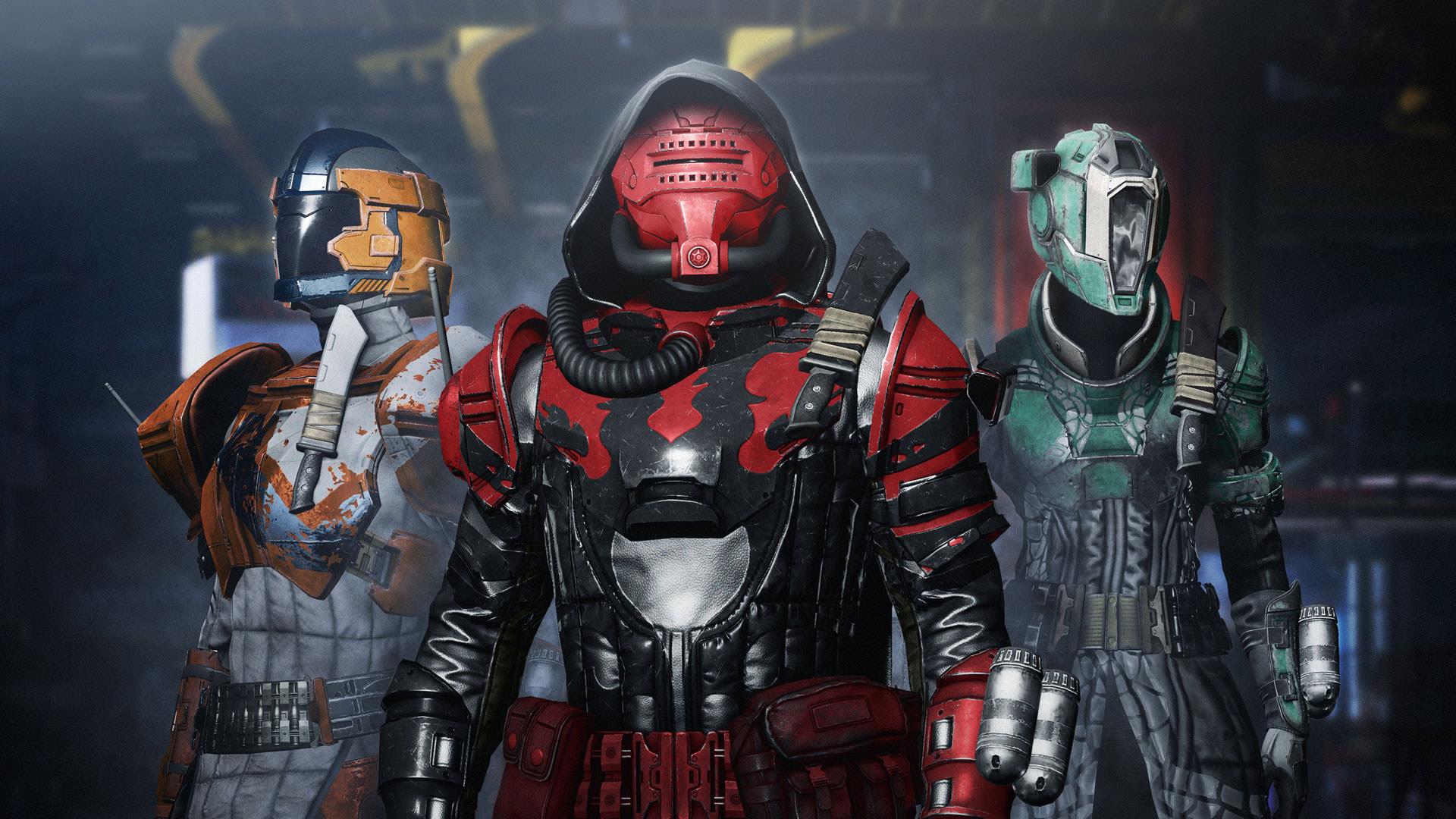 Destiny 2 Has a PVP Problem 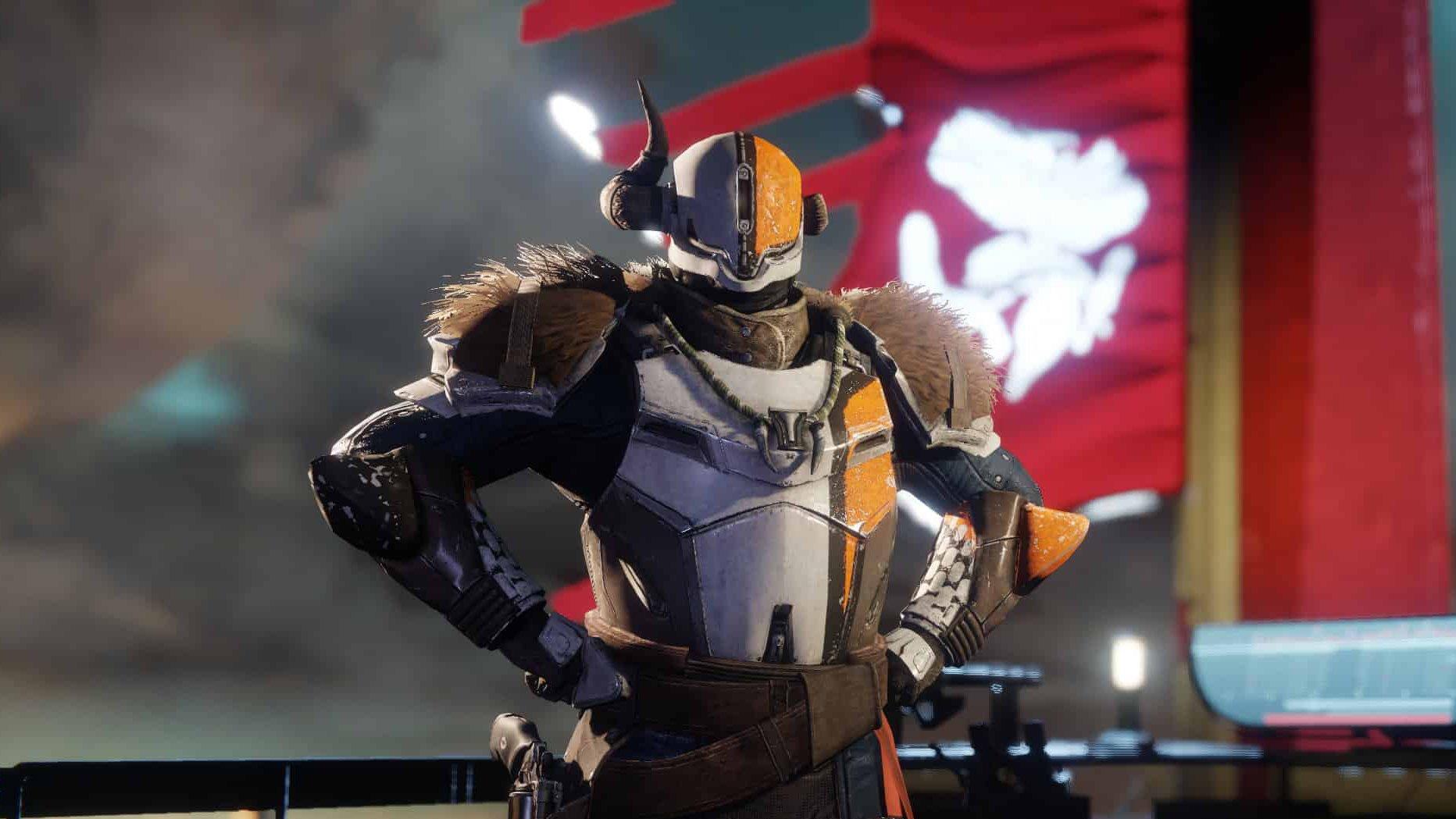 Destiny 2: Beyond Light is an excellent expansion. Well, that’s absolutely true if you’re only talking about narrative and PvE aspects. Even when it comes to weapons and balancing, it’s a really good sandbox for the game. The problem is in PvP.

Crucible has long been a point of contention. If you’re part of the Destiny online community, you’ll know that me speaking about this isn’t out of the blue. This month there have been some high profile names that have been talking about PvP, and one notable content creator who has decided to quit Destiny 2, for now at least.

So, what are the issues? There are a handful in my opinion. Now, it’s likely that you’ll have seen these talking points elsewhere. That’s because we don’t live in a vacuum, and some of these problems are so entrenched in the game that it’s nothing new that we’ll be talking about, at least for veterans.

The list of issues includes lack of incentive (which is the biggie), lack of new maps, maps being taken away, lack of modes and options, and the overall structure. The most recent bone of contention in the community is the presence of Stasis. I would also propose that the very nature of what Destiny 2 is means that PvP will always be contentious.

Let’s talk about the biggest issue first, incentive. This includes the reason we play the game in the first place: rewards. The dopamine fix that we get when the numbers go up, when the chime goes off and an exotic drops, when we finally get the god roll we’ve been looking for. Destiny players will grind out the most boring activities for hours upon hours in order to get coveted loot, so it speaks volumes when we finally get fed up with an activity.

This area of the game absolutely exposes the way Bungie has neglected the Crucible up until this point. The armor set is the same set for strikes and Gambit. Taste is a personal thing, however, the armor set for this year is hideous. I thank Bungie for implementing universal ornaments last year so that I don’t have to look at it.

Despite that, Crucible only has one legendary weapon reward tied to it. Sure, Bungie said we’re getting two more in the next season, but that’s like putting a Band-Aid on an already burst dam. 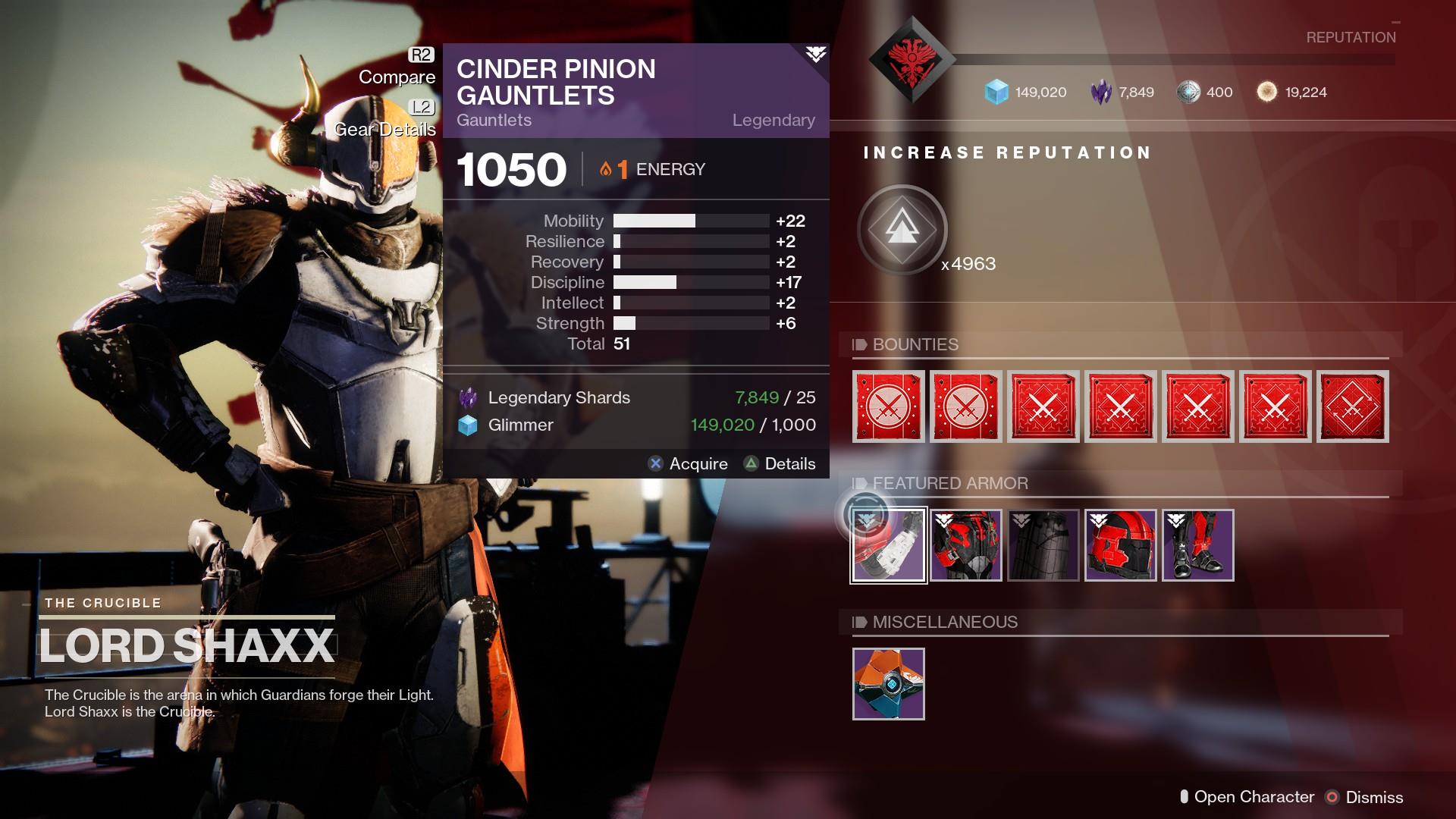 Besides no exclusive loot, the Crucible also lacks focused loot grinding, the same type we see in seasonal activities now. The new raid’s final boss chest is now a mini-vendor where you can spend the raid currency to get better rolls of the guns and armor you’ve earned. Why doesn’t the lighthouse have the same system for Trials of Osiris? Or even the competitive playlists?

Another reward that is lacking in Crucible is upgrade materials. If you want ascendant shards, enhancement cores, or enhancement prisms, then you play PvE. Sure, the new ghost mod system has a limited time mod that earns you a chance at enhancement prisms when you get a precision kill in Crucible. While that’s a good move, it’s not enough, especially since it’s got a return of about one shard per every four to five matches, depending on the circumstances.

Therefore, my suggestion is that we need a better flow of material rewards from Crucible, as well as better PvP loot. And these rewards need to be farmable in an intentional way by players. Without proper incentive, we will never have the PvP population the game deserves.

The next big issue (not necessarily in terms of importance) is that it’s been over a year since we got maps added to Destiny 2 PvP. Notice that I didn’t say new maps. The previously added maps are reworked versions of Destiny 1 maps. The last truly new maps came with Forsaken. Some were so widely panned that Bungie took them all out of the game. An overreaction for sure. Still, why hasn’t Bungie added a map on Europa? Where are more Dreaming City and Tangled Shore maps? Anything would be great.

Hand in hand with maps is modes. With the Destiny Content Vault, Bungie removed a slew of modes from the game. Sure, they were on rotation and took up a lot of space. This doesn’t fix the lack of new modes. Even old fan favorite modes would be great, like the one everyone always talks about: Rift. 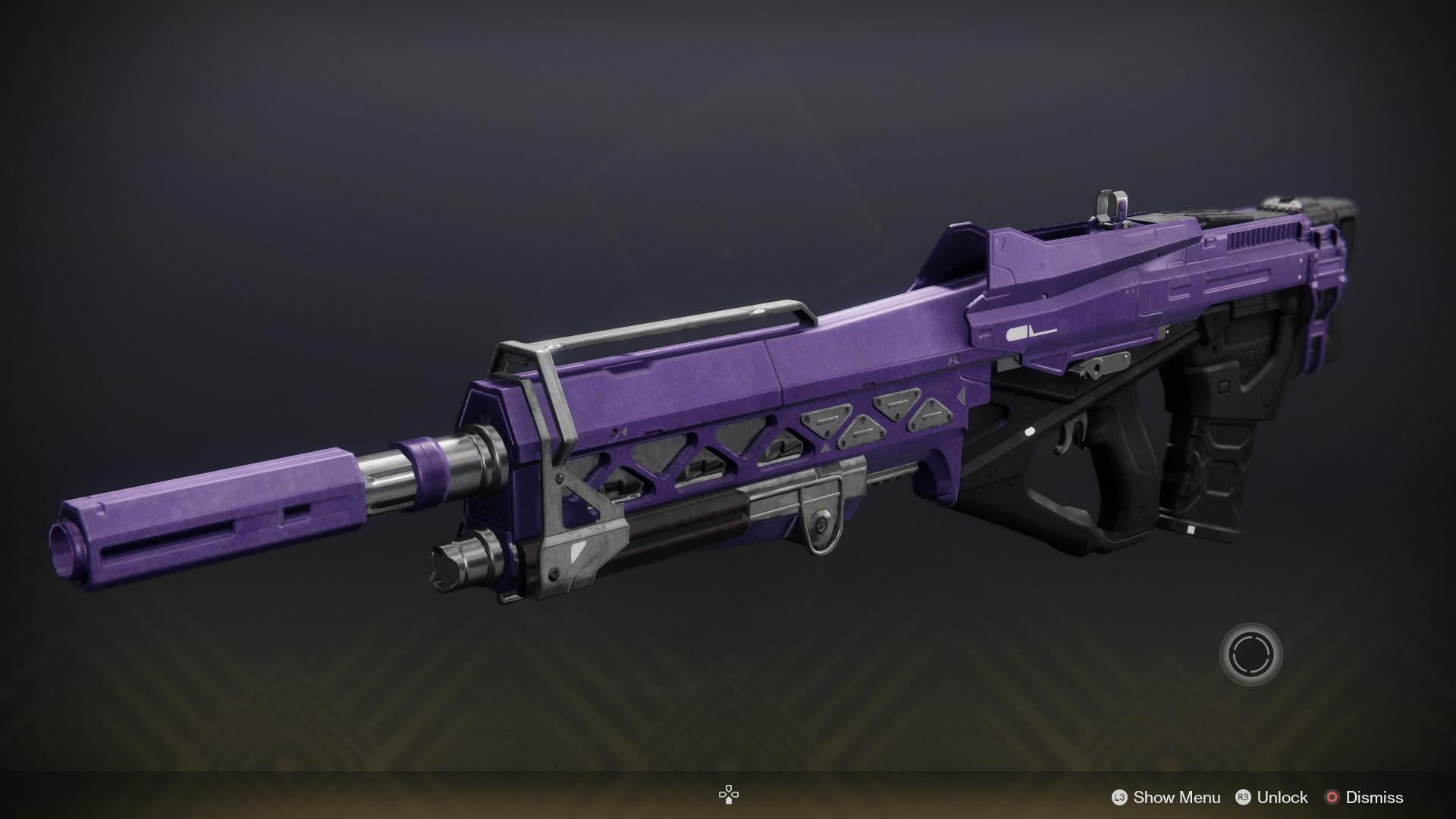 A possible explanation for the lack of maps and modes, and essentially the neglect the Crucible has experienced for a long time now, is a lack of resources. No, Bungie isn’t poor. There is simply no priority given to the Crucible, because the studio is working on new IP. Unfortunately it’s going to be a long time before Bungie fixes anything about the Crucible in a satisfying or substantial way.

On top of that, Bungie’s silence on the matter is a huge point of frustration for the community. Bungie is a company that communicates with its community often, yet they stay silent on some of the bigger issues that the game has had for a long time. It’s understandable that players would get a little negative about the state of affairs.

Next on the agenda is Stasis. Depending on which camp you’re in, you might say that Stasis has been plaguing Crucible since Beyond Light launched. Now, I’m neither a Stasis apologist (not that many are out there), nor am I one of the extreme proponents of it being entirely removed from Crucible, or even the game. 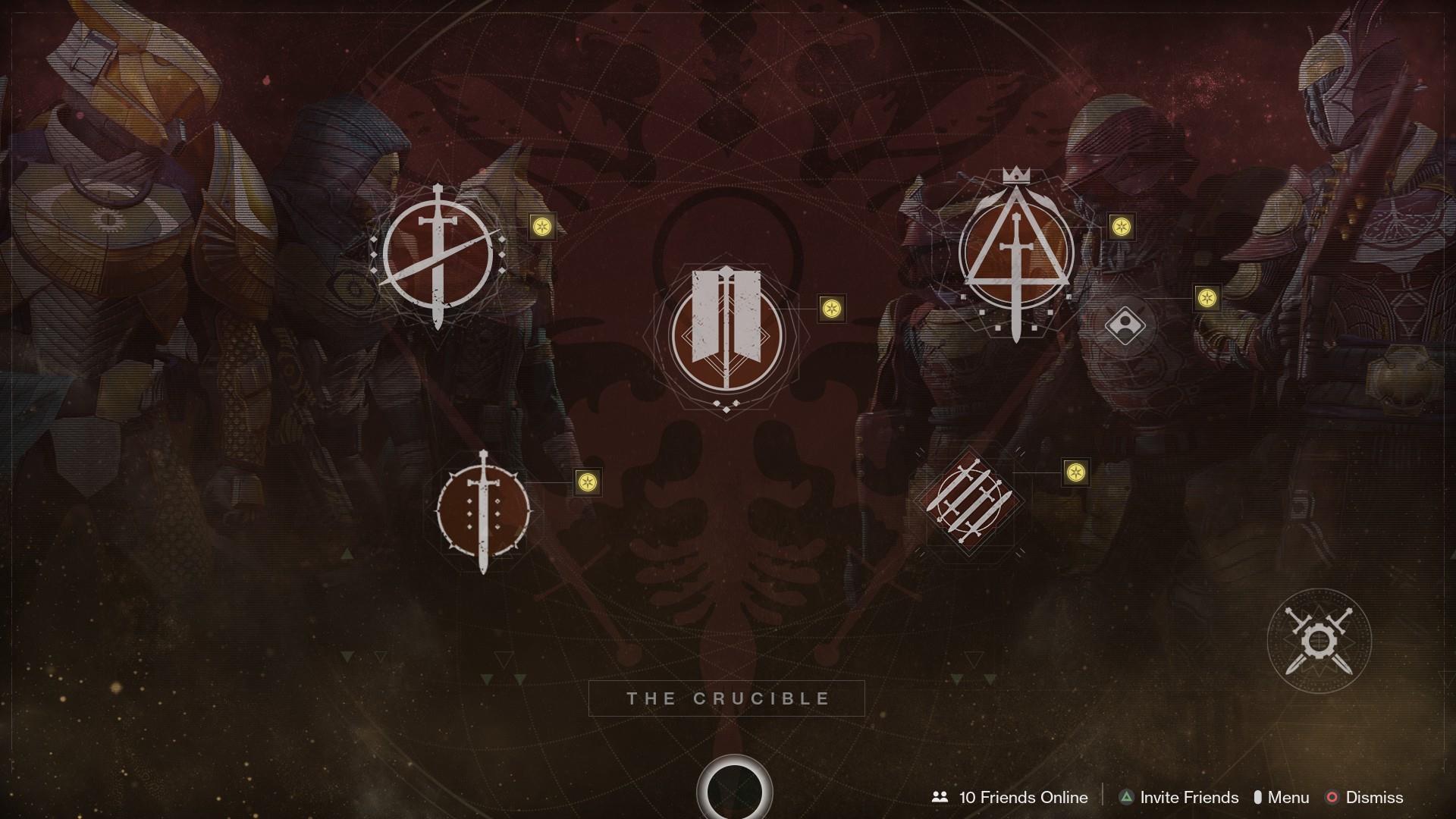 It’s undeniable that Stasis is a force to be reckoned with in Crucible. In my opinion this is an issue of Stasis itself being poorly balanced for PvP on top of inherent issues Destiny’s Crucible has.

The reality of the situation is that Stasis is easy to use and rewards a low-skill style of play. I’m not saying that as a great PvP player. In fact, I’m on the mediocre side of average. Games, whether PvE or PvP, should always reward skill. The best games are those that are easy to pick up and difficult to master. Stasis is easy to pick up and mindless to master. With a little bit of speed and incentive, you can wipe an entire enemy team off of spawn with a Revenant Hunter. Of course, not everyone is an idiot, and it would take some luck to kill all six guardians with a single grenade and shatter dive (not firing a single bullet, by the way). Just the other day, I witnessed an enemy player achieve almost exactly this scenario, but three of us were observant and sidestepped the insta-kill cheese, while the three who hadn’t been paying attention suffered for it.

I vacillate between saying Stasis is broken and saying it simply needs to be balanced. Usually, I err on the side of balance. Stasis simply needs to have a PvP version that is toned down and a PvE version that is the same as it is now. If you nerf Stasis across the board, it will kill the brand new subclass. Stasis is already in a position where it’s not the most optimal build in a high tier PvE activity. If you’re serious about raids or Grand Master Nightfalls, you don’t run Stasis.

And this is what Stasis exposes about the nature of Destiny 2 PvP. Destiny is always seeking the balance between PvE and PvP. Too many times in the past has it happened that something was nerfed with PvP in mind and killed off in PvE too. Often vice versa. I’m not here to propose a neat solution to that; there isn’t one. The inherent problem of Destiny is that it will never be a perfectly balanced game.

However, I think that there are cases where Bungie ought to balance something separately for PvE and PvP. This is one of those cases. The developers need to do their black magic deverry (it’s a word because I say so) and tune Stasis differently for PvP and for PvE.

I’ve even thought of some examples. The most important is: Stasis should never entirely freeze a guardian. Fine, slow them down. We already had that in the game with various effects from the Hunter and Titan subclasses and some exotics. However, freezing a guardian, especially one in a super (especially a solar subclass, Bungie, please explain that logic to me) stops the flow of the game and is an instant win button. Freeze PvE enemies all you want. Never allow a guardian to be frozen. I think that single change will address most people’s issues with Stasis.

When it comes to the timing of the Stasis effects on guardians, those should also be kept to a minimum. Bungie already fixed that earlier this season, so it should never have a longer effect than it has now.

Another suggestion is about the Duskfield grenade. It is an excellent area-denial tool. However, it’s also an excellent route to giving people an aneurysm. An effect the grenade has is to suck all players or PvE enemies in the vicinity into the area of effect. Even those at a reasonable distance. This is jarring and, at least in my opinion, excessively unfair. It should still do that in PvE to our enemies, but the big suck should be disabled for guardians.

I’m not here to hate on Stasis, or even PvP, so I won’t waffle on and on, even though I’m sure there are many constructive ideas in the community about how to improve the game.

Ultimately, Bungie needs to sort out a few major issues it has been neglecting. The playerbase is bleeding out, especially in PvP. As a console player, the issue of cheating hasn’t even crossed my mind during this post. Yet, if you ask any PC player, especially those playing Trials and comp, cheaters and hackers are rife.

Unfortunately, the issues aren’t easy to fix, and they won’t be fixed soon. It breaks my heart to speak so negatively about a game that I adore, but as a community we need to speak about the state of the game so that the developers have a chance to hear our thoughts. Please remember to always keep things civil on social media, and remember that it’s just people behind the scenes. 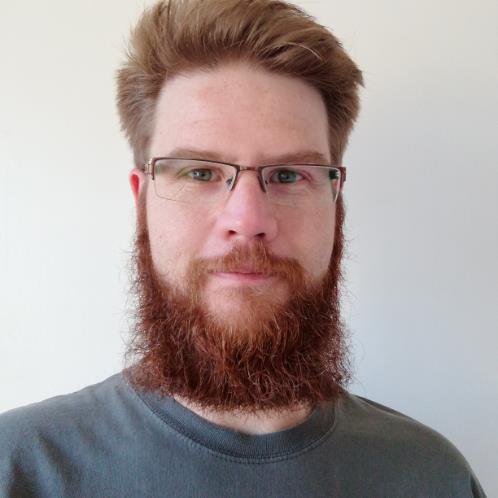