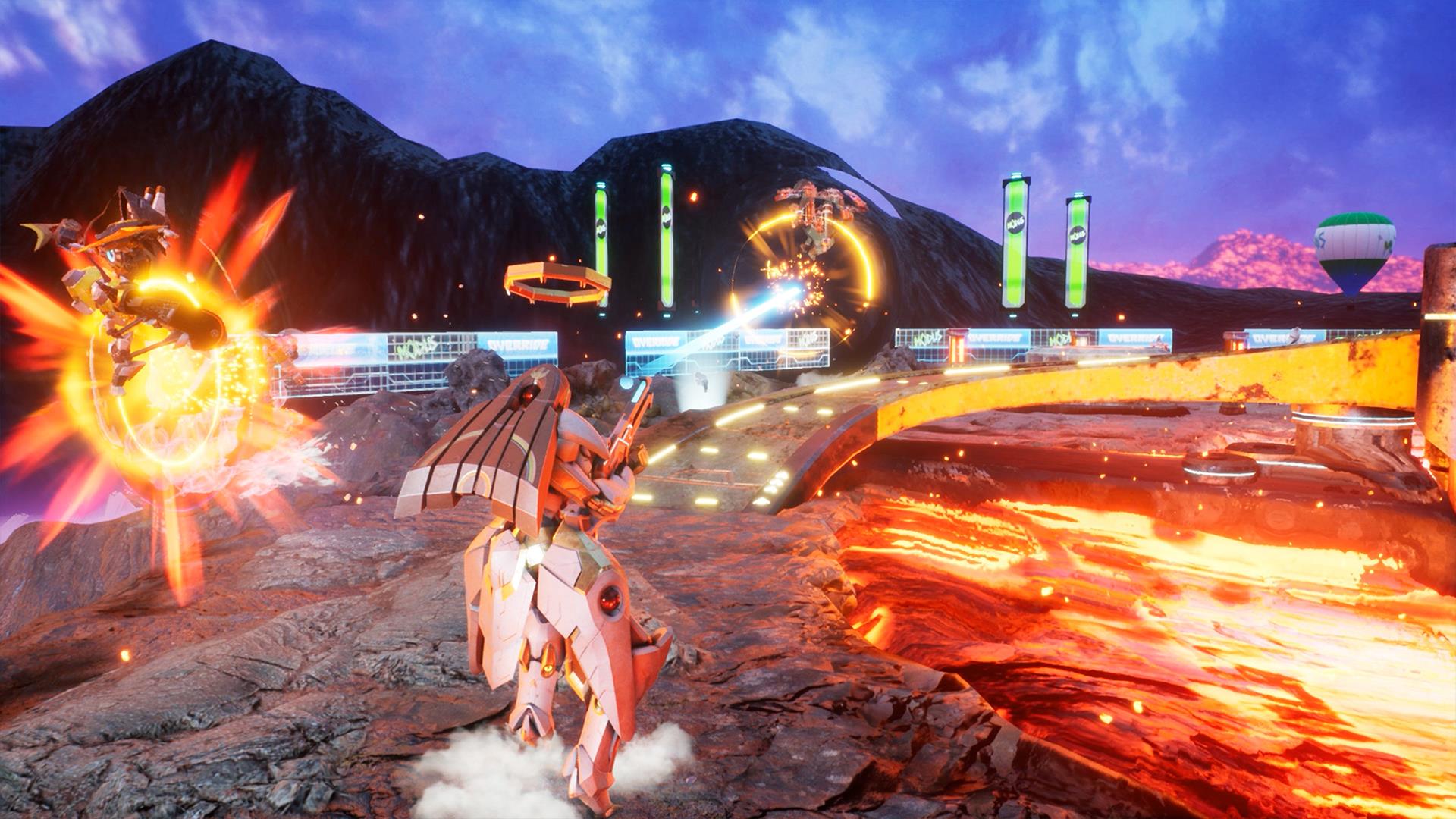 Override 2: Super Mech League is perhaps the most unlikely sequel of 2020. While I really enjoyed the original Override’s brand of 3D mech fighting, it never seemed to catch on much with the gaming community. I was dismayed when I saw Override: Mech City Brawl selling for a heavily discounted price just a few weeks after it’s initial 2018 release. The game was clearly a labor of love, with its goofy mech designs and flashy special effects, and it was a shame to see Override struggle to find an audience. 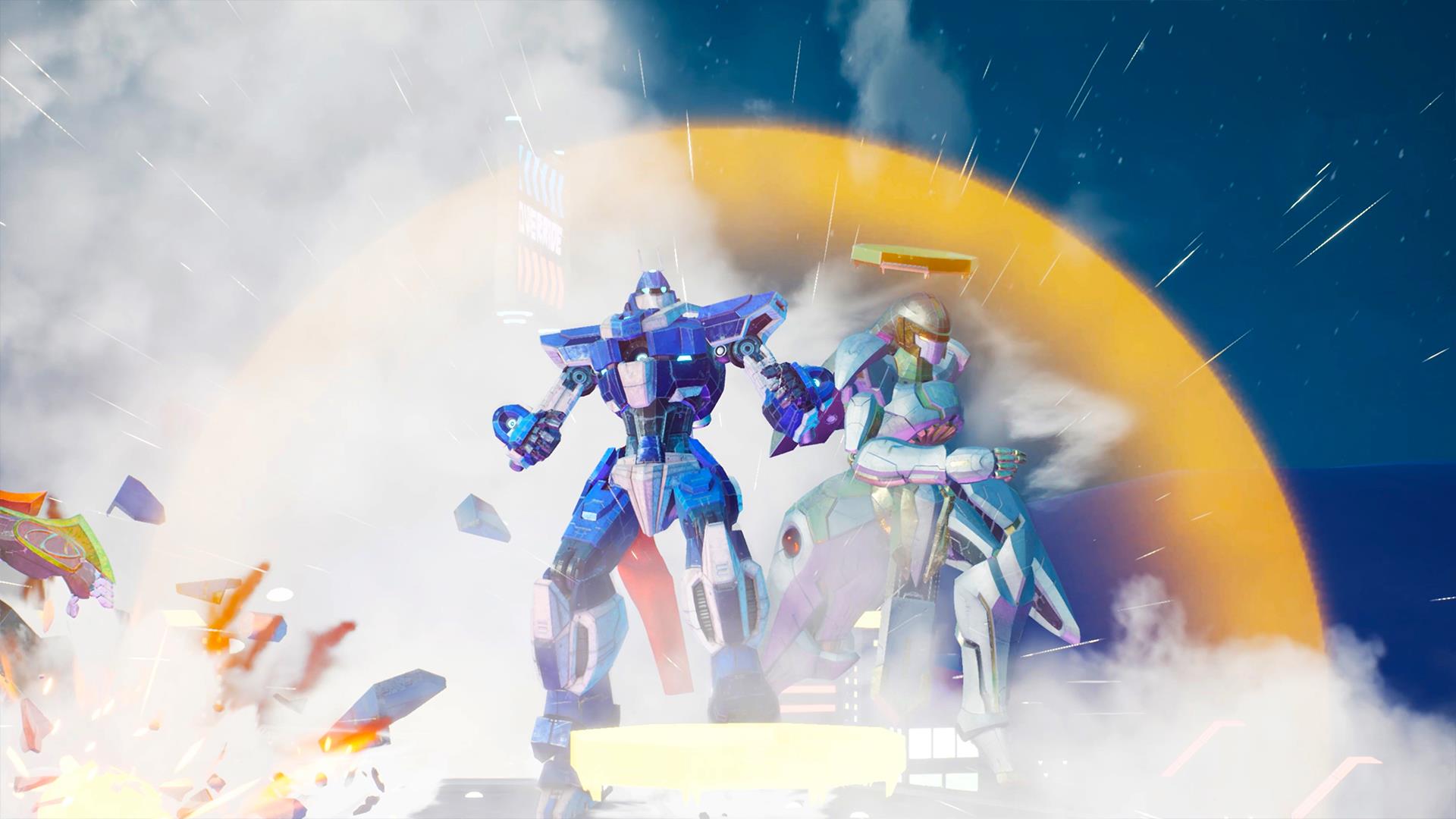 But now it’s 2020, and against all odds, a second Override game has arrived. Correcting many of the issues players had with the original title and adding a bunch of new characters to the mix while refining old favorites, Override 2: Super Mech League is a ton of fun – even if the online implementation and AI struggle a bit to keep up with the modern gaming audience’s expectations.

Override 2’s gameplay is unique in the marketplace. There simply aren’t that many other games that offer Override’s brand of mech brawling. In many ways, Override games remind me of the beloved Dreamcast title Power Stone – with players stomping around a 3D arena, hurling overpowered attacks at each other and grabbing pick-ups for temporary power boosts.

Players choose from a large roster of twenty mechs to take into battle (with Ultraman and three more friends available via DLC), each with completely unique power sets. It is an incredible feat that Modus Games Brazil was able to develop a gang of mechs this diverse, as each character feels and plays very differently from all the others.

Attacks are mapped to the shoulder buttons. If I am speaking in generalities, the four buttons are mapped to light and heavy punches, and light and heavy kicks – but how these attacks play out varies wildly from character to character. I’m not just talking about visual differences, either; one heavy attack might kick an opponent across the arena, whereas another might lock them in to a flurry of unavoidable blows. When playing a new character, it is really best to take a second to fiddle with their attacks to figure out how everything shakes out. 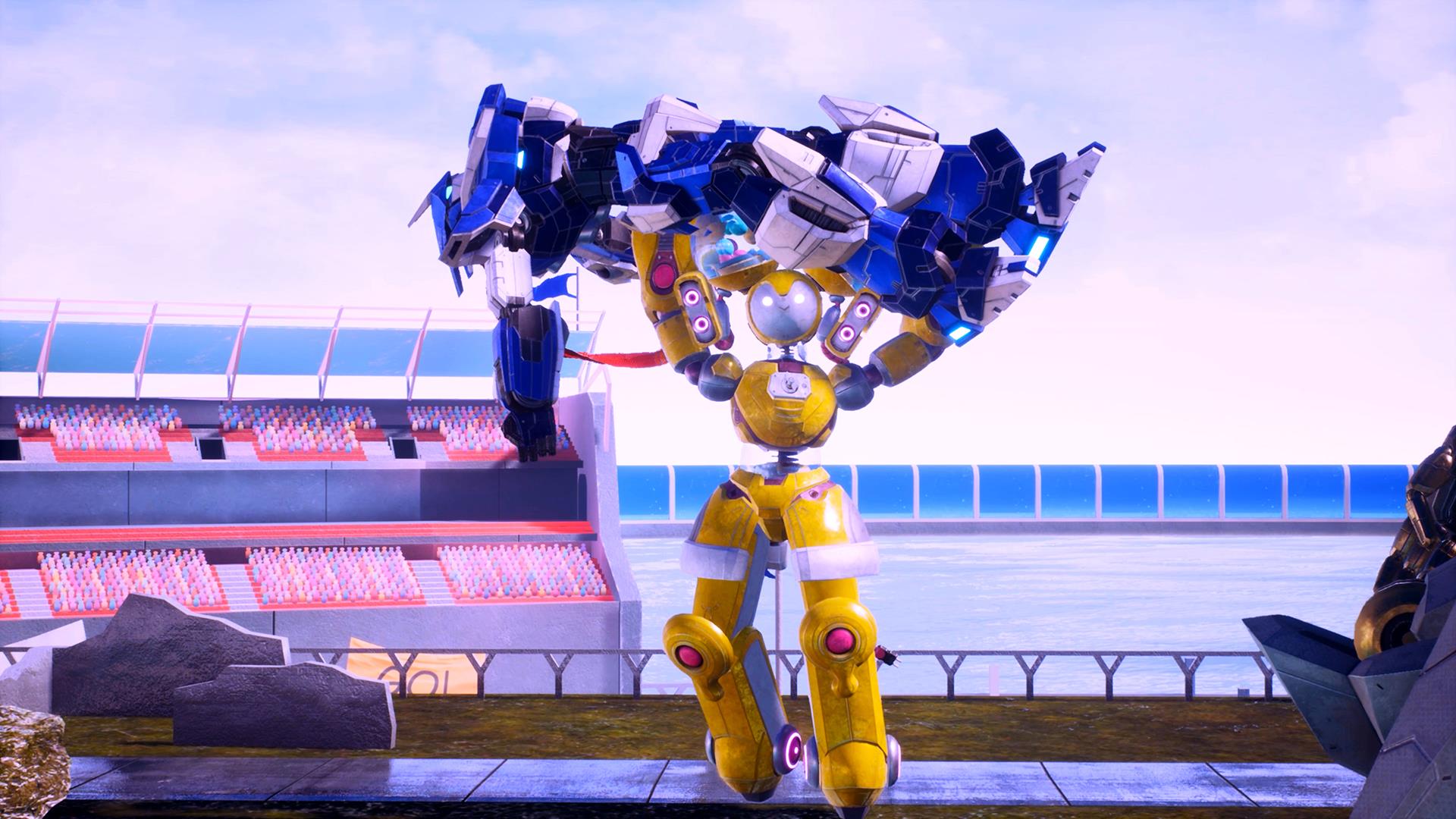 But that’s only the tip of the iceberg. By pressing various combinations of the shoulder buttons (both the right buttons, both the front buttons, etc.), players can fire off special attacks, and that is where the variety between these characters really starts to shine. Sure, pressing both front buttons will generally fire off a ranged attack – but what that attack is and how it plays out varies wildly between mechs.

The Voltron-looking dude (sorry, I’m terrible with the names) fires off a basic missile, but the archer lady  shoots arrows. The Aztec warrior guy shoots his hand across the arena. There are guided missiles, an array of rapid-fire gumballs, concussive mines, burst damaging rockets, the list just goes on and on – and that’s just for the ranged attacks. Every character in the game has a variety of specials and an ultimate that you can charge by controlling a certain point on the battlefield. There’s a lot to learn with each character, and all of it is fun. In multiplayer, grabbing a new character and taking them blindly into battle is wildly unpredictable and entertaining. New players can expect a lot of “Oh my God, what was that?” moments from opponents as they figure out the moves in their arsenal. 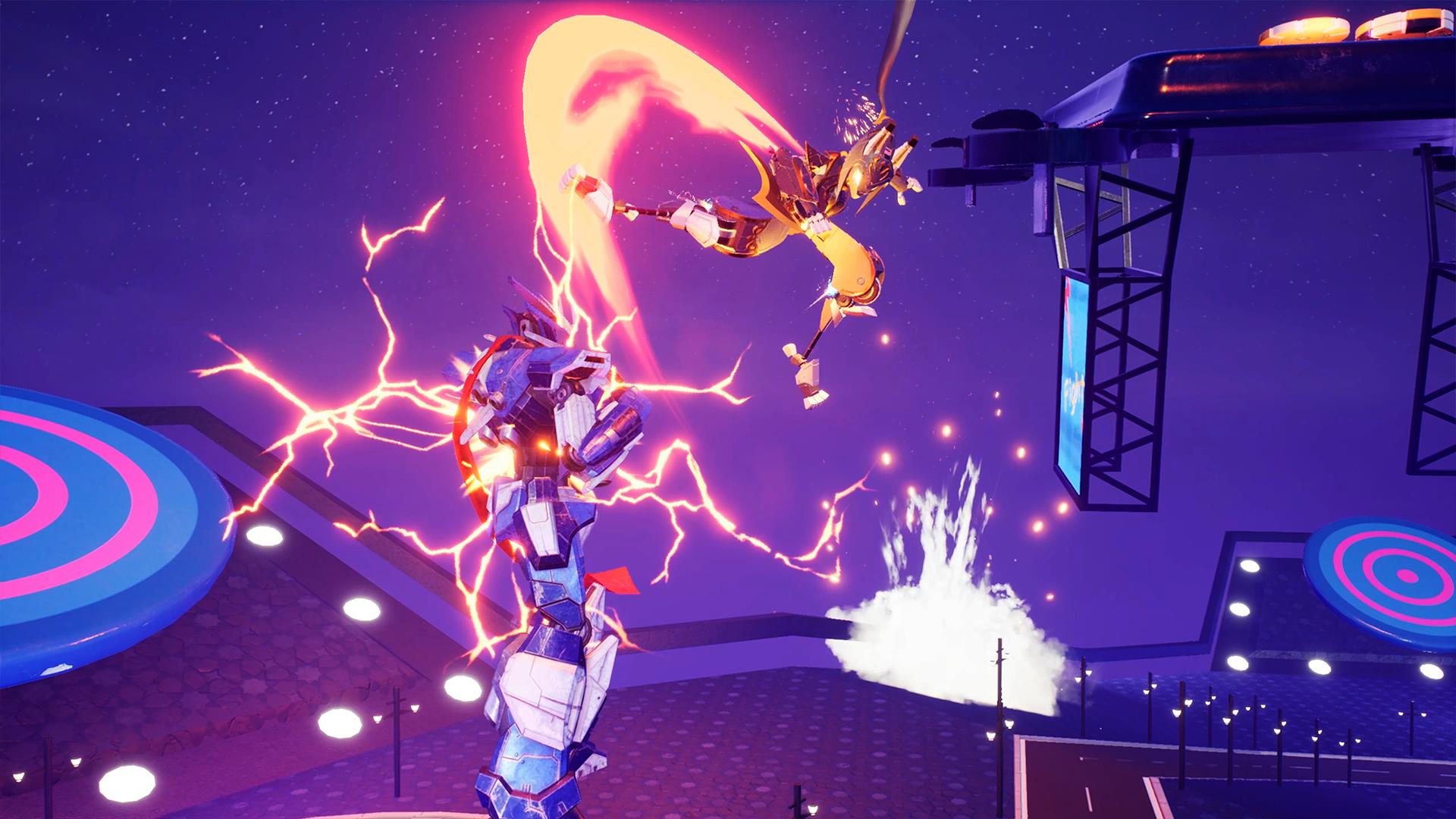 In addition to all of your inherent abilities, game-changing weapons regularly spawn around the arena. There are lances, swords, shotguns, rocket launchers, and even a good old-fashioned frying pan that you can pick up to start whapping your opponent. Ignore these at your peril, because if your opponent gets their hands on a shotgun, you are in for at least 20 seconds of hardcore damage while you scramble to figure out how to counter it.

A nice selection of game modes gives a lot of variety to Override. There are 1v1 fights, 2v2 battles, 4-person free-for-alls. There is also an interesting mode where players try to stay within an ever-shrinking circle while taking damage if they get tossed outside – sort of a mini mech battle royale. Another mode has players battling waves of progressively more difficult mechanical baddies. 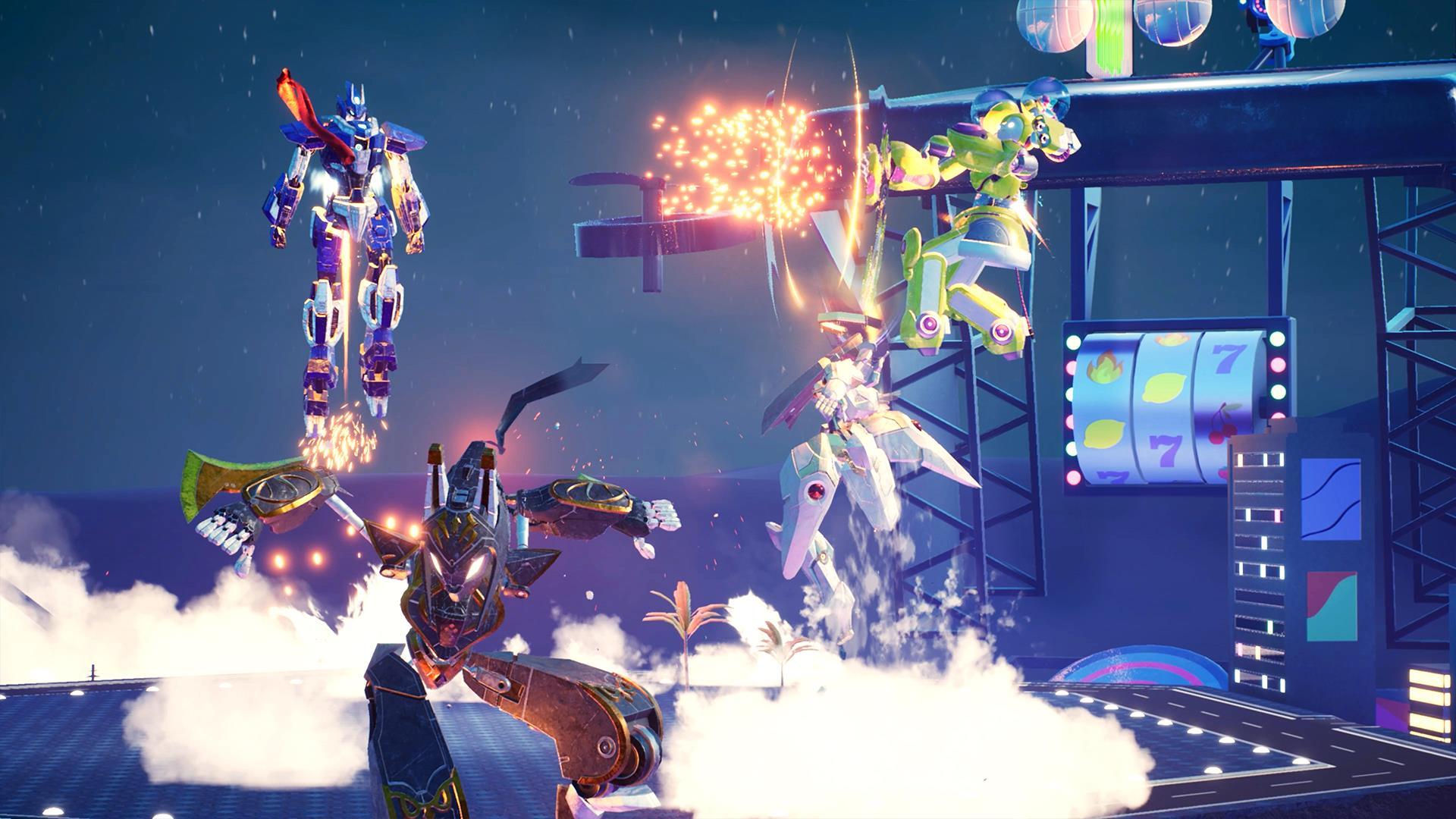 A single-player mode has players progressing through a series of leagues that each focus on one of these game modes, picking up sponsors and earning cash to spend on new mechs and cool (and often weird and funny) cosmetics. But multiplayer is where the meat of Override 2 is, and even the league mode allows players to hop online to look for opponents instead of fighting bots. I expect that a lot of players will mess with league mode for a while but will then pivot over to multiplayer once they have their bearings. But the devil is in the details, and for Override 2, those details reveal a lot of missed opportunities to allow friends to play with each other.

Override 2: Super Mech League offers local multiplayer with up to four players duking it out via split-screen – which is awesome. Not enough developers focus on local, so it’s always welcome, and Override 2 is a fantastic party game. But online, there are some strange configuration issues that put limitations on how players engage with each other. Players can hop online alone and attempt to find some random groups to play with – not the easiest task, as Override isn’t exactly the most popular game franchise. Or, if you have friends that own the game, you can hop into games with them. But you can’t do both. If you and only one other friend own Override 2, you can’t go online and look for randos to play with – you are stuck with bots to fill out four-player game modes. And even cranking the bots all the way to the most aggressive difficulty, my friends and I have found them to be pushovers, presenting little challenge. We generally make fast work of the bots, then focus on each other. 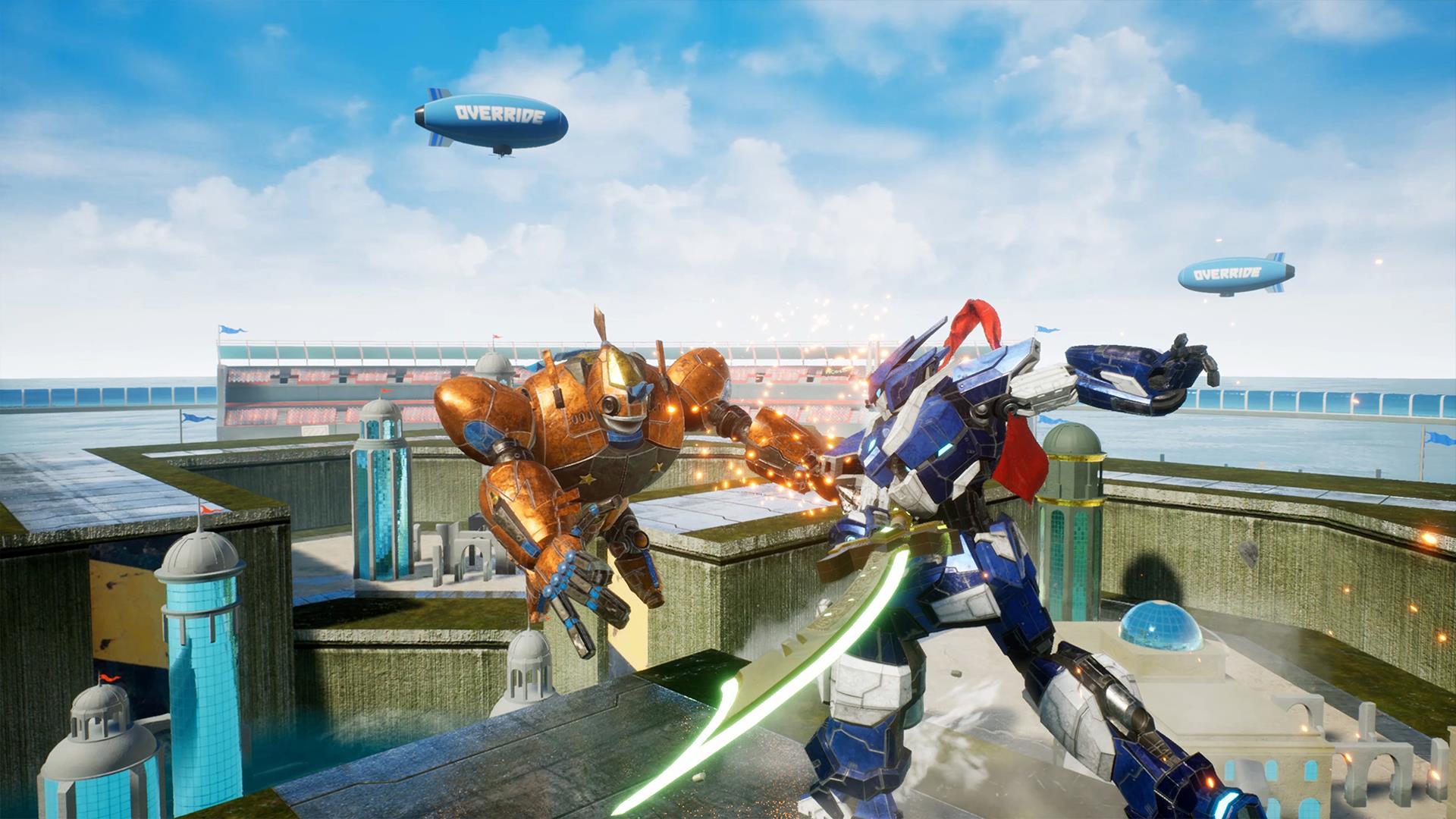 Further exacerbating the online difficulties is the lack of cross-play – not just between platforms, but also between generations. I have the PS5 version, but my buddies are on PS4. I had to download the PS4 version to play with them – not a deal breaker, but I am missing out on the super slick 60 FPS 4K visuals when I want to play with my friends – and my progress and any money I earn in those battles doesn’t carry over to the PS5 version.

I understand that Override 2: Super Mech League was produced on a budget, and some of these features were likely sacrificed in order to include stuff like higher resolution and more characters. But when the multiplayer is the most compelling way to play, segmenting off the PS5 version from the PS4’s massive player base feels like a big miss, making it far to difficult for those players with the new-gen version to find buddies to battle.

Override 2: Super Mech League is a grand budget title, offering hours of entertainment for a reasonable price. But understanding that this game contains some limitations will likely smooth over any potential disappointment that players might experience once they get online and dig in. Go into Override 2 with slightly lowered expectations, understanding that this is one hell of an effort for a non-AAA title, and you will likely have a fantastic time.

Override 2: Super Mech League is a great local and online multiplayer 3D brawler. With a ton of moves, a huge roster of cool and unique characters, and flashy special effects, Override 2 offers hours of fun. Go into the game with the knowledge that the online implementation is somewhat limited, with no cross-platform or cross-generation play. But when battling friends at home or online, Override 3 can’t be beat.