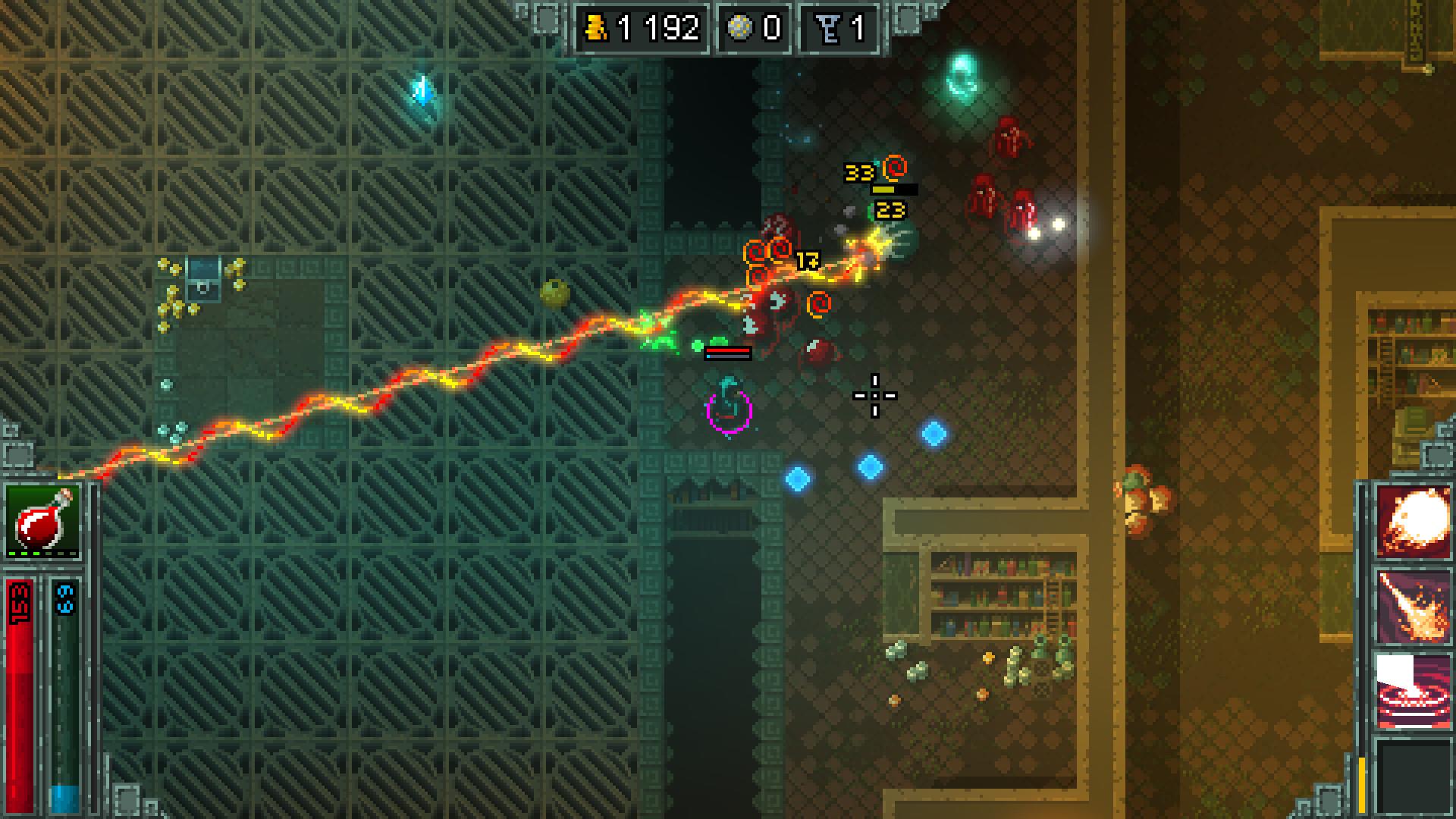 Although in our streams my party and I love to praise and curse Blitworks (“Thanks a lot, Blitworks” we mutter when our team wipes), that company is actually Heroes of Hammersmith’s publisher. The developer of the game is Crackshell – a five-person team based in Stockholm, Sweden. Heroes is Crackshell’s sequel to the original Hammerwatch, a hack ‘n slash RPG published in 2013. Heroes has been bopping around Steam since March 2018, collecting fans and piling up DLC, but it wasn’t until the Ultimate Edition released on PS4 that the franchise came to my attention.

At Heroes of Hammerwatch’s outset, players can select one of several hero archtypes, each of which has their own strengths and weaknesses. The Paladin plunges into battle with higher armor, and quickly gains a heal spell. The Magician excels at crowd control, but can’t take too many hits. I eventually settled on the Ranger – who can try to stay out of the fray with ranged attacks, but can take more than one hit before crumbling. Including all of the included DLC, players have five or six archetypes to choose from, with others that can be unlocked by playing the game. Heroes of Hammerwatch even allows players to customize their characters – which is funny in a pixel-art game. You are basically changing the colors of your little blob, and your little blob’s blobby clothes, which is pretty amusing. 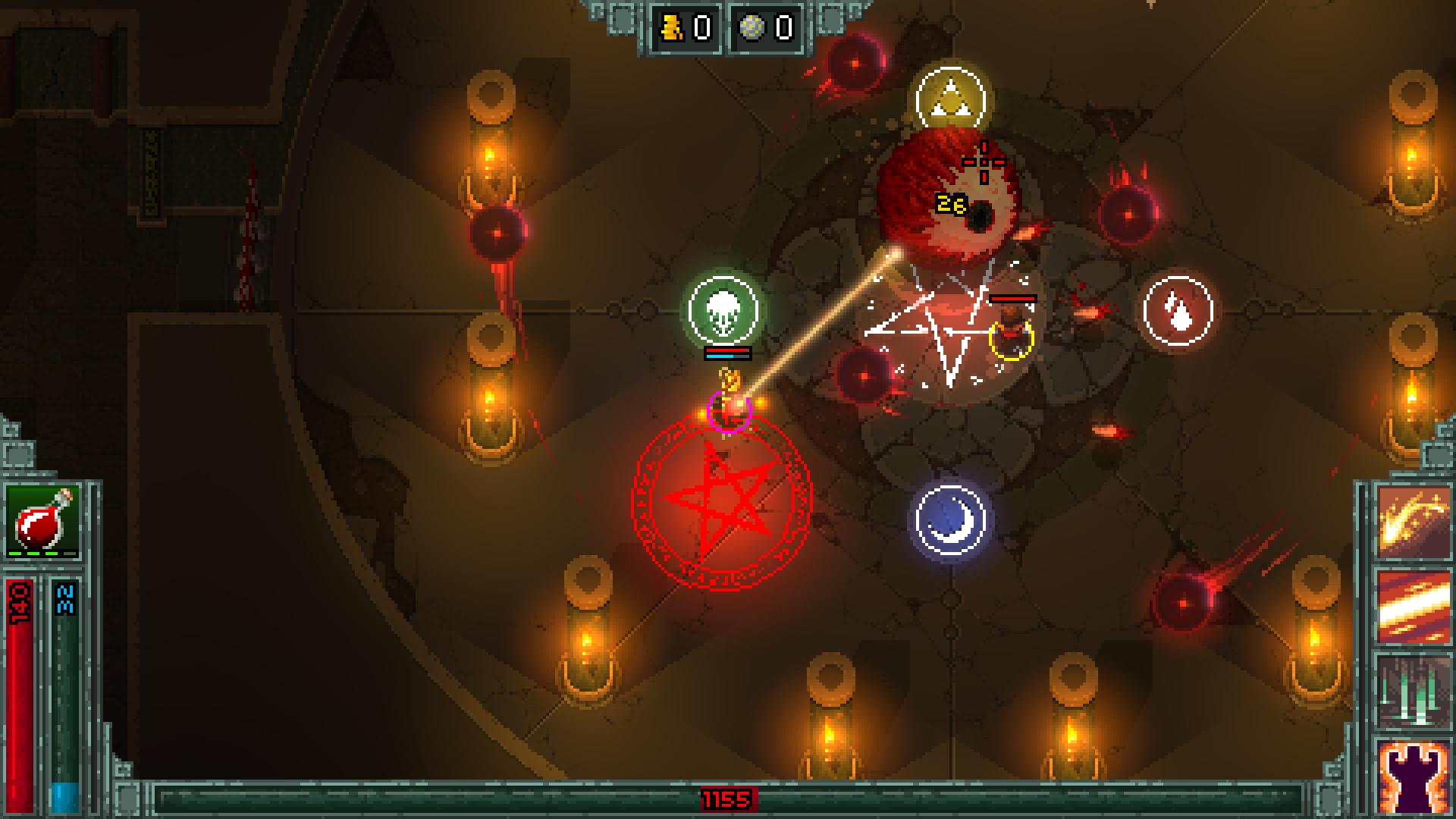 After character creation, Heroes of Hammerwatch plunks players down into a hub town, known as Outlook. A quick tour around the town reveals that there will eventually be a lot of stuff to unlock there, but with no currency available, there is only one option – dive into the mines just outside of town and test your luck.

From there, you can probably guess what happens. Players clear the first floor of the mines, wiping out monsters and gathering treasure. If you make it through that floor alive, you head down to the next. Then the next. Once a floor, you are given the opportunity to send any goodies you have found to the surface via a handy dandy elevator cart. Once every several floors, you encounter a boss. Rinse, repeat. 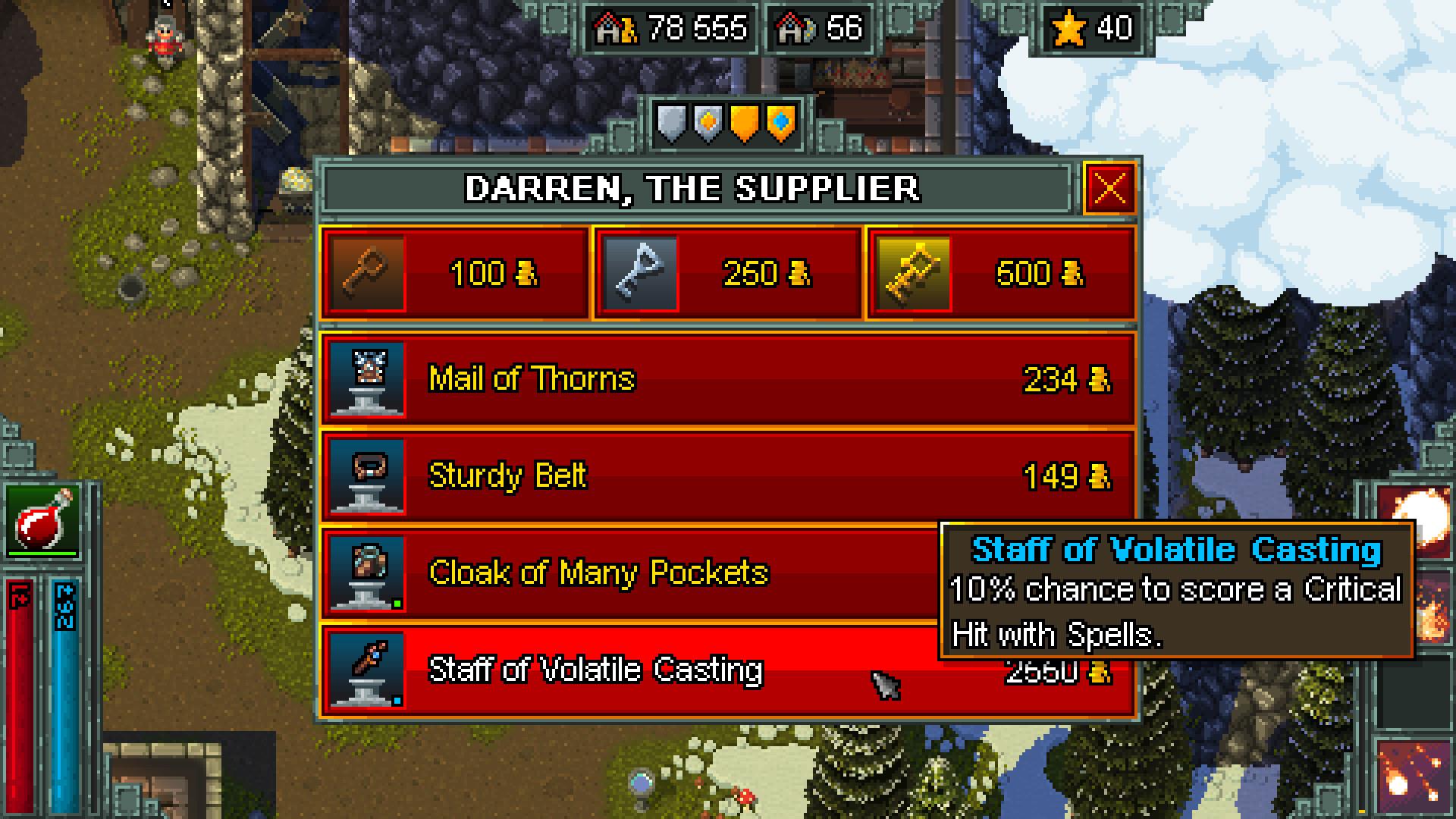 In the early game, you will be lucky to survive to see the second floor. But before long, you will have enough treasure to unlock stuff in the town, and that’s where the genius of Heroes of Hammerwatch’s loop becomes apparent. There are eight or nine different structures to upgrade in Overlook, and each offers a unique set of upgrades to the player. The Town Hall allows the player to upgrade their skills. The blacksmith improves armor and weapons. The Apothecary provides more and stronger potion formulas. But these are just the basics. Heroes of Hammerwatch goes far deeper than that.

There is a tavern where players can gamble their treasure with a simple card game, pulling special prizes with their winnings. A wishing fountain allows players to toss in coins for blessings and curses. A church accepts “donations” in exchange for stat-changing blessings. A vendor sells pets to accompany you on your travels. The list just goes on and on. 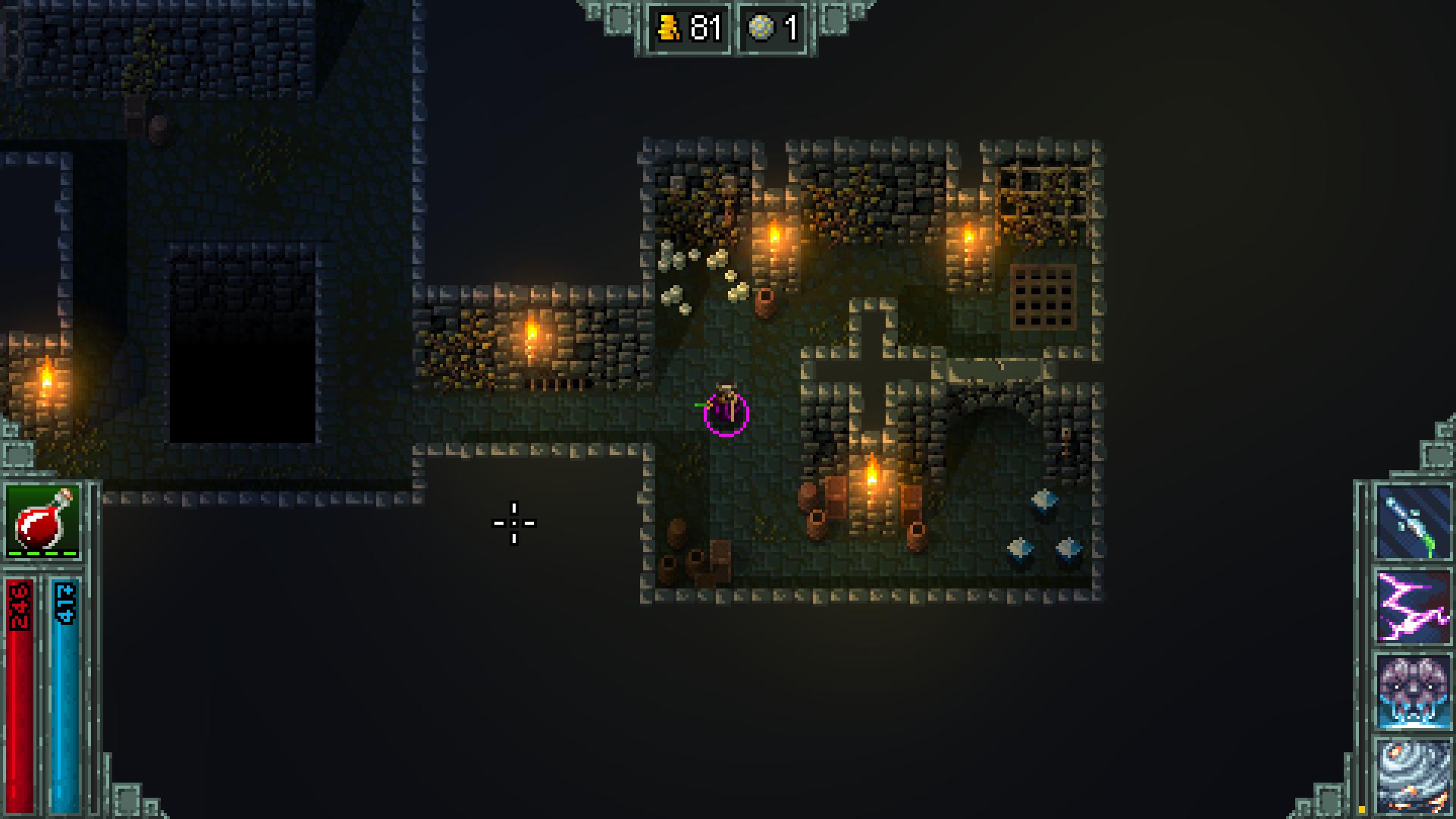 The point is, there is always a goal to strive for, and each new unlock or purchase improves your survivability that much more, allowing you to stay down in the mines longer and explore even further. This is an enormous game, and I haven’t even begun to discuss all of the content that is included in the Ultimate Edition, which gathers all of Heroes of Hammerwatch’s DLC into one convenient package. There are more dungeons, more character types, more challenges – and a murderous arena that allows players to face off against endless deadly waves while picking up boons bestowed upon them by the rowdy crowd – the best (and most dangerous) way to grind for valuable loot.

I was enjoying Heroes of Hammerwatch while playing on my own, but I didn’t realize how much I was missing until I played with friends. This is a game that absolutely comes to life when others join the fray. My group was immediately drawn into the game, and having others with you makes the motivation to dive into the mines “one more time” that much stronger. We have been having a great time exploring Heroes of Hammerwatch’s intricacies, trying to figure out what stuff does and how things work. 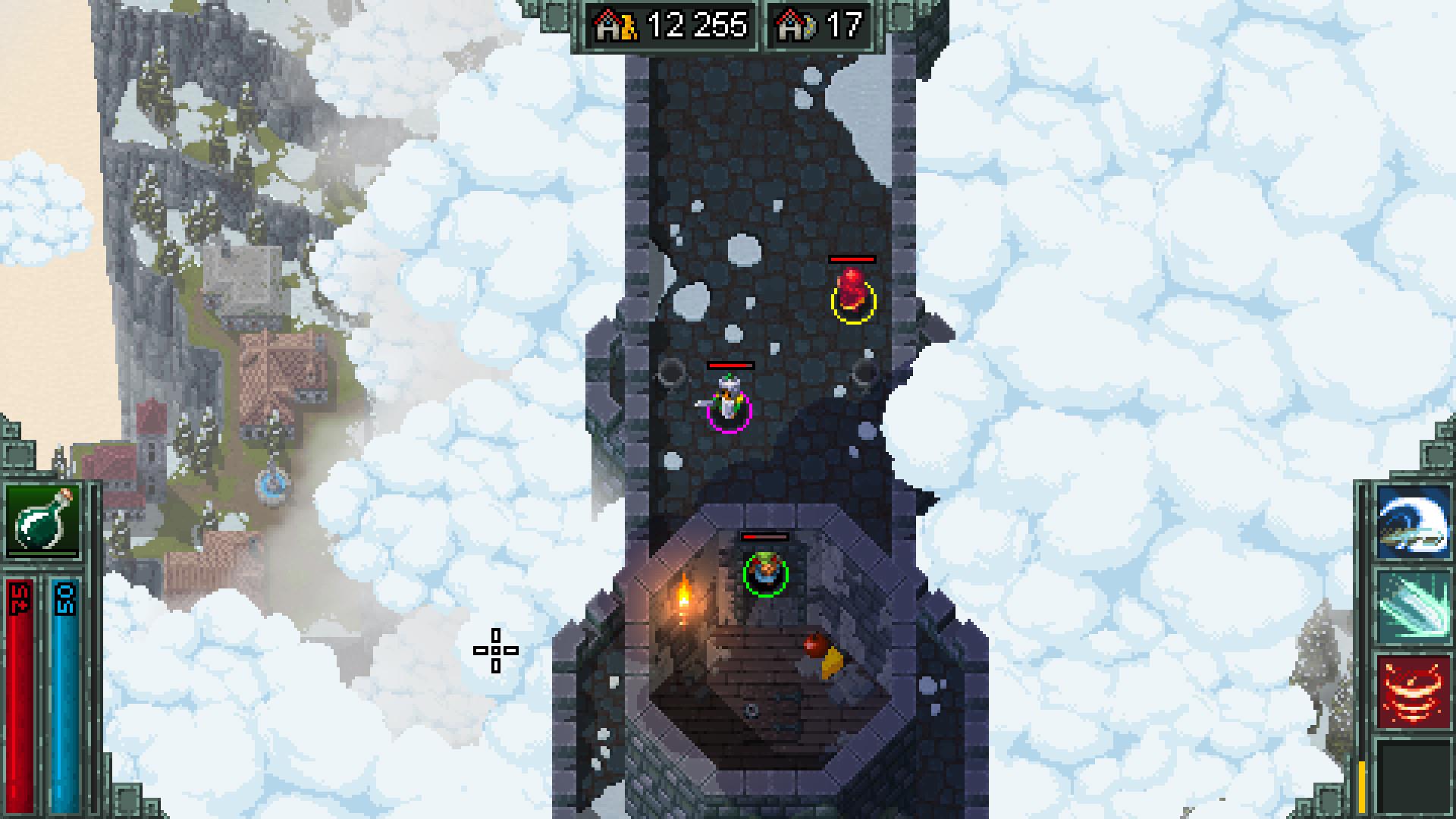 Which leads me to my one grievance with Heroes of Hammerwatch – the fact that this game doesn’t explain anything about how it works to the player. And I mean nothing. Sure, there are plenty of guides online to check out if you want to know how a particular feature works, but don’t think that you will be getting any explanations from the game, because none are forthcoming. Heroes of Hammerwatch is strictly old-school in that respect, forcing the player (or players) to experiment with things in order to figure out what they do.

That’s more or less fine in the dungeon, where it is fun to carefully approach something new, not knowing if it will give you a blessing, outright kill you, or send you spiraling off to another dimension. But in the town, it would be great to have a little more explanation as to how the game is structured, and what each of the upgradable structures is good for. What are those little gems required for upgrading skills? How do I get to other areas of the game? And I’m still not 100% sure how that dang fountain works. 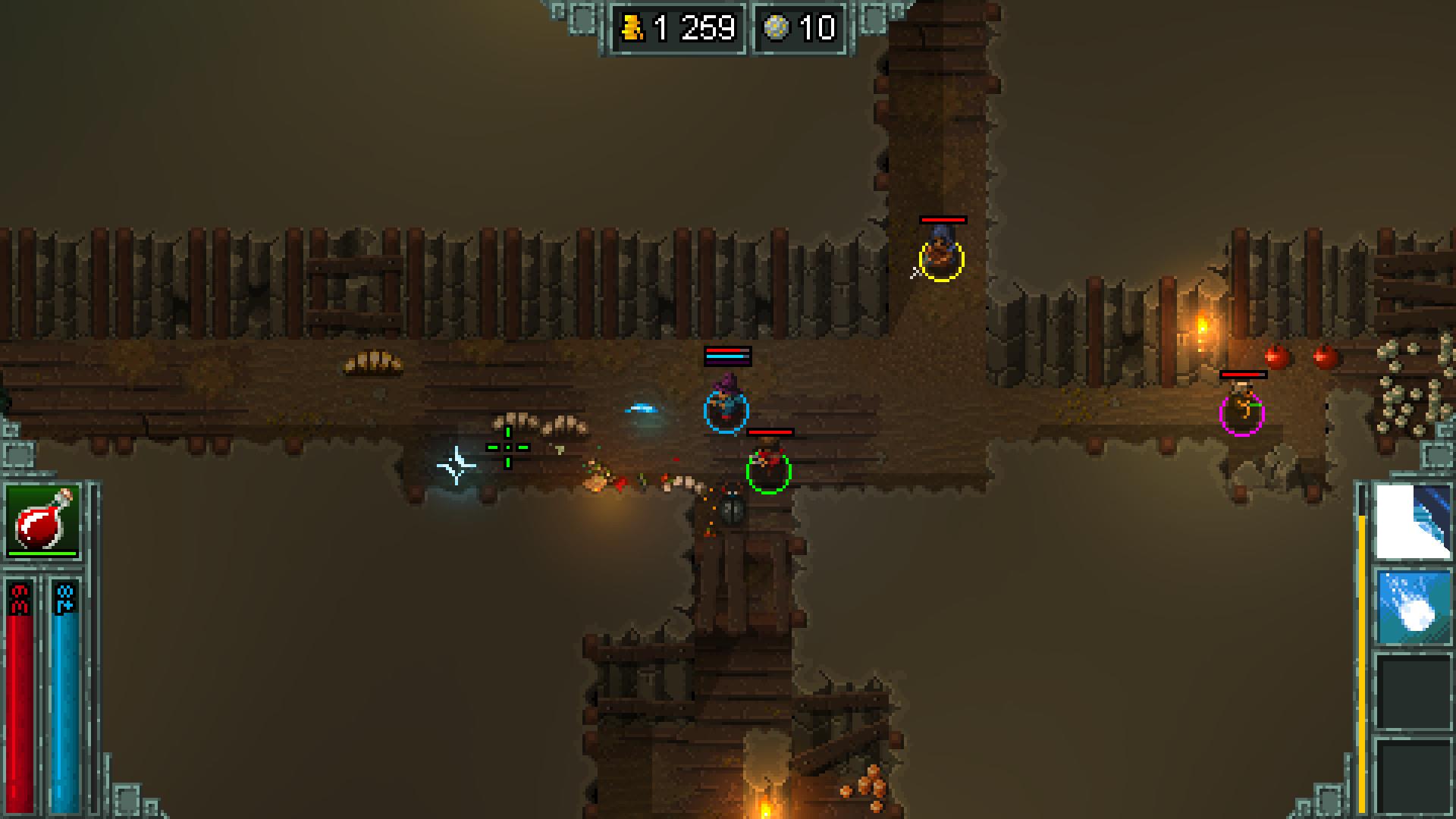 I’m not opposed to games that force the player to piece things together for themselves, I suppose. I came up on bootleg Commodore 64 games that left those of us without instruction manuals completely in the dark, so I’m capable of piecing things together. But I do think that modern gamers might expect or appreciate a bit more guidance – even if it takes the form of a brief introductory sequence to explain what the heck we are doing all of this for. In Heroes of Hammerwatch, explorers are clearly exploring for the pleasure of doing so – there is no attempt at even the faintest of stories to motivate progression. You are diving into dungeons because you like diving into dungeons.

But in the real world, isn’t that the purest reason to play a game like Heroes of Hammerwatch? Perhaps dispensing with the story simply acknowledges that most stories in games like this are mere window dressing, and Heroes is only trying to get out of its own way to allow players direct access to the good stuff.

Either way, Heroes of Hammerwatch succeeds as a wildly addictive and fun game, with enough depth and surprises to keep players coming back for ages. Gather a few friends, plunk down a few bucks, and buckle up for hours – even days – of fun. Here I sit, with a PS5 and almost every launch game available, and all I want to do is play Heroes of Hammerwatch. Modern gaming is fun, but Heroes of Hammerwatch feels like a classic game from yesteryear, in all the best ways.