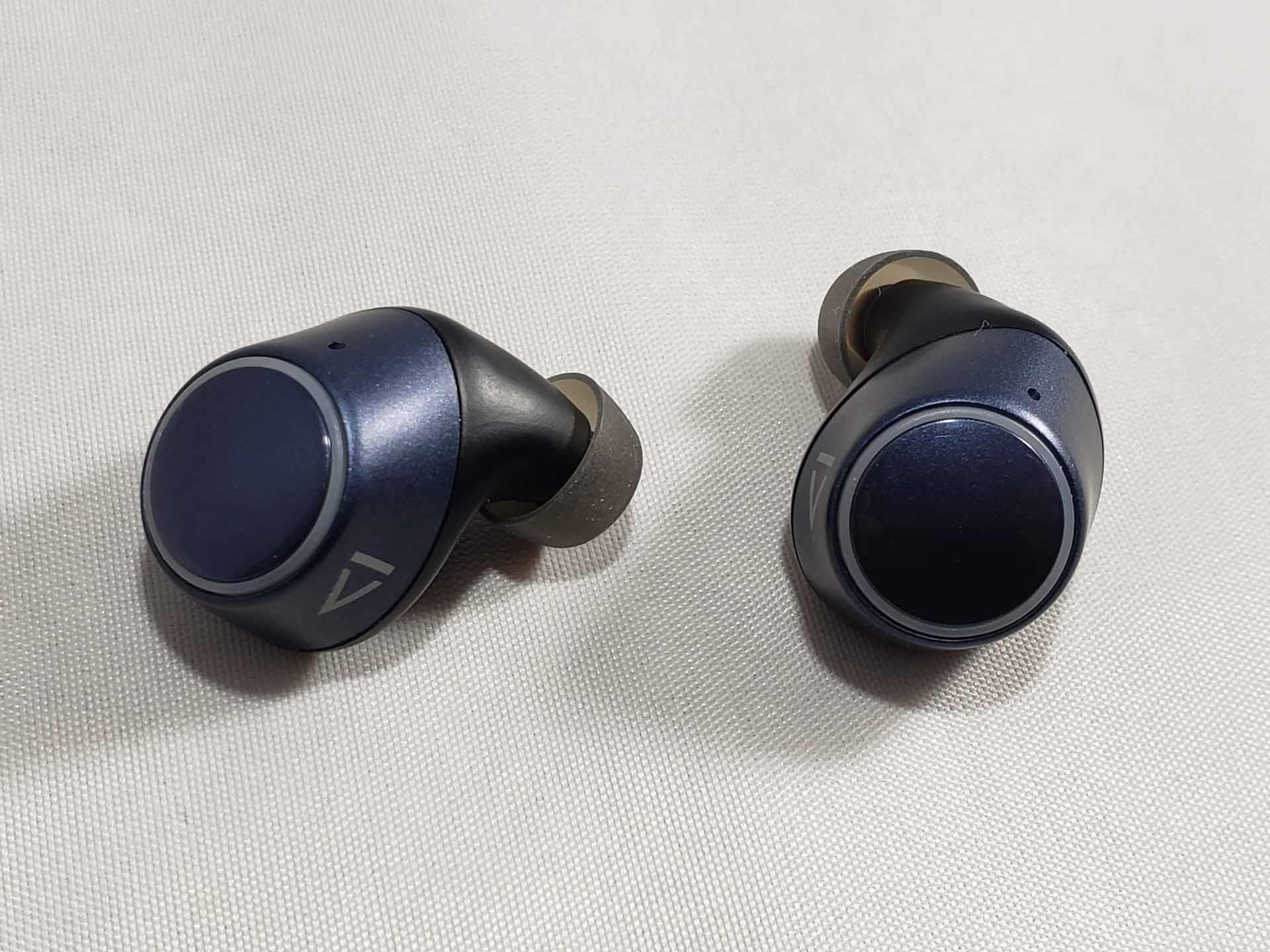 Last year, I took a look at Creative’s earbuds, the Outlier Air. Featuring incredible battery life, good sound, and IPX5 waterproofing, the Outlier Air was a great alternative to the more expensive Samsung Galaxy Buds or the Apple AirPods. There were a few complaints, especially with having to press on the Outlier Airs to activate the controls, but I did like them at the price point. 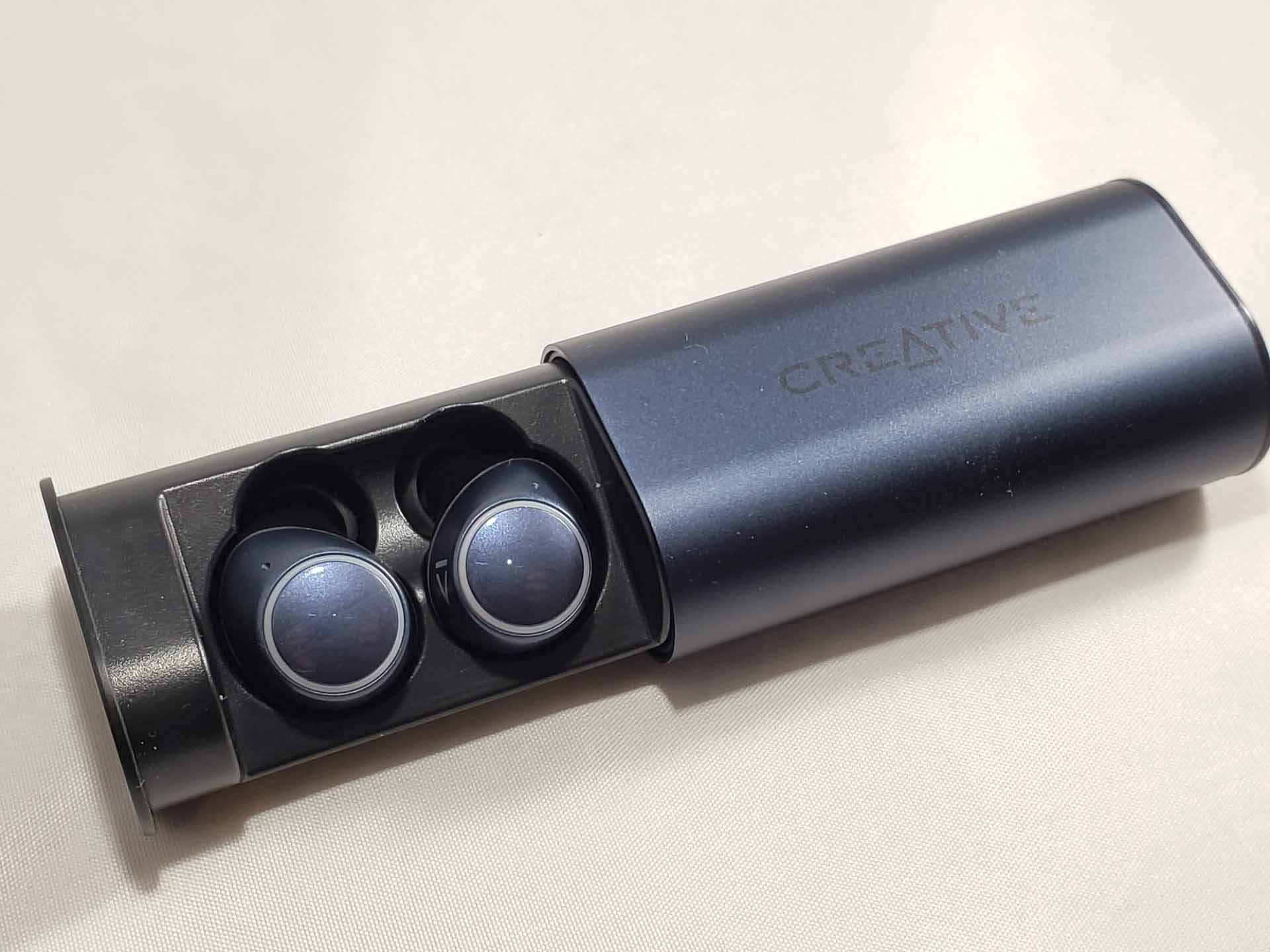 The Outlier Air V2 features the same design in both the earbuds and the charging case as the Outlier Air, albeit in a nice cool metallic blue color and slightly longer in size. The charging case features two magnetic holding spots to charge the earbuds and you can charge up the case with a USB-C cord. Everything is pretty much the same as the first version except it does seem the magnets to hold the earbuds in seem stronger. I did have a small issue where one of the Outlier Airs would get bumped out of place if the case was jostled too much causing no charging to occur, but that seems to have been fixed with the V2 case. I tried vigorously shaking the case around to try and loosen them from their charging position, but they were held firmly in place by the magnets. One thing fixed from the previous version.

Now for the Outlier Air V2 earbuds themselves. As I said earlier, they are essentially the same design as the previous one minus the exposed metal where the magnets attract to in the case. When placed in the ear, they do stick out a little bit, but not to the point where I found them to be excessive. 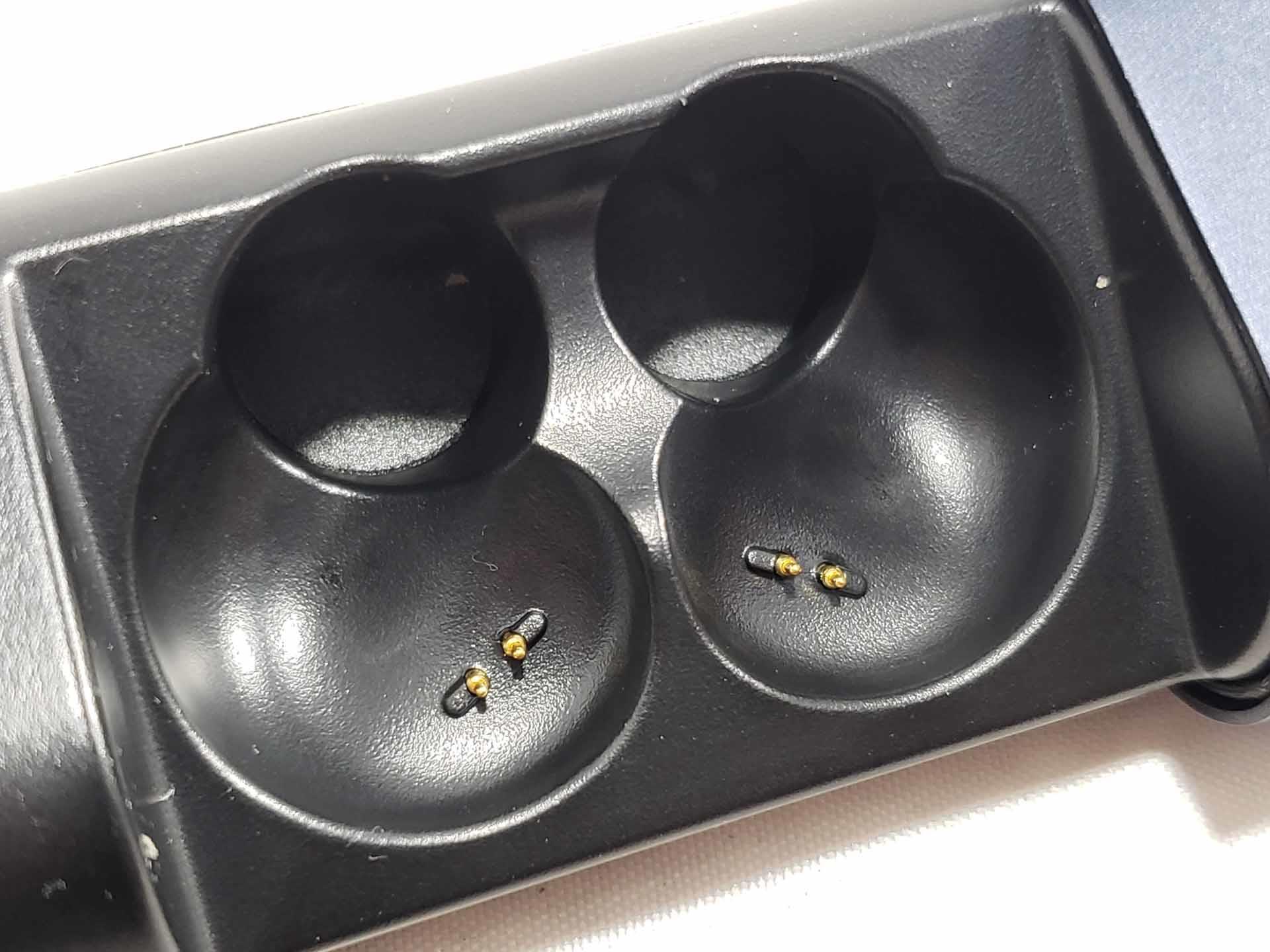 The big change is no longer do you need to press down on the Outlier Airs for commands. That was my big complaint of last year’s version as it would hurt my ears after a little bit trying to skip tracks or activate Google Assistant. It got to a point where I would use my phone or my watch to handle all the media controls. 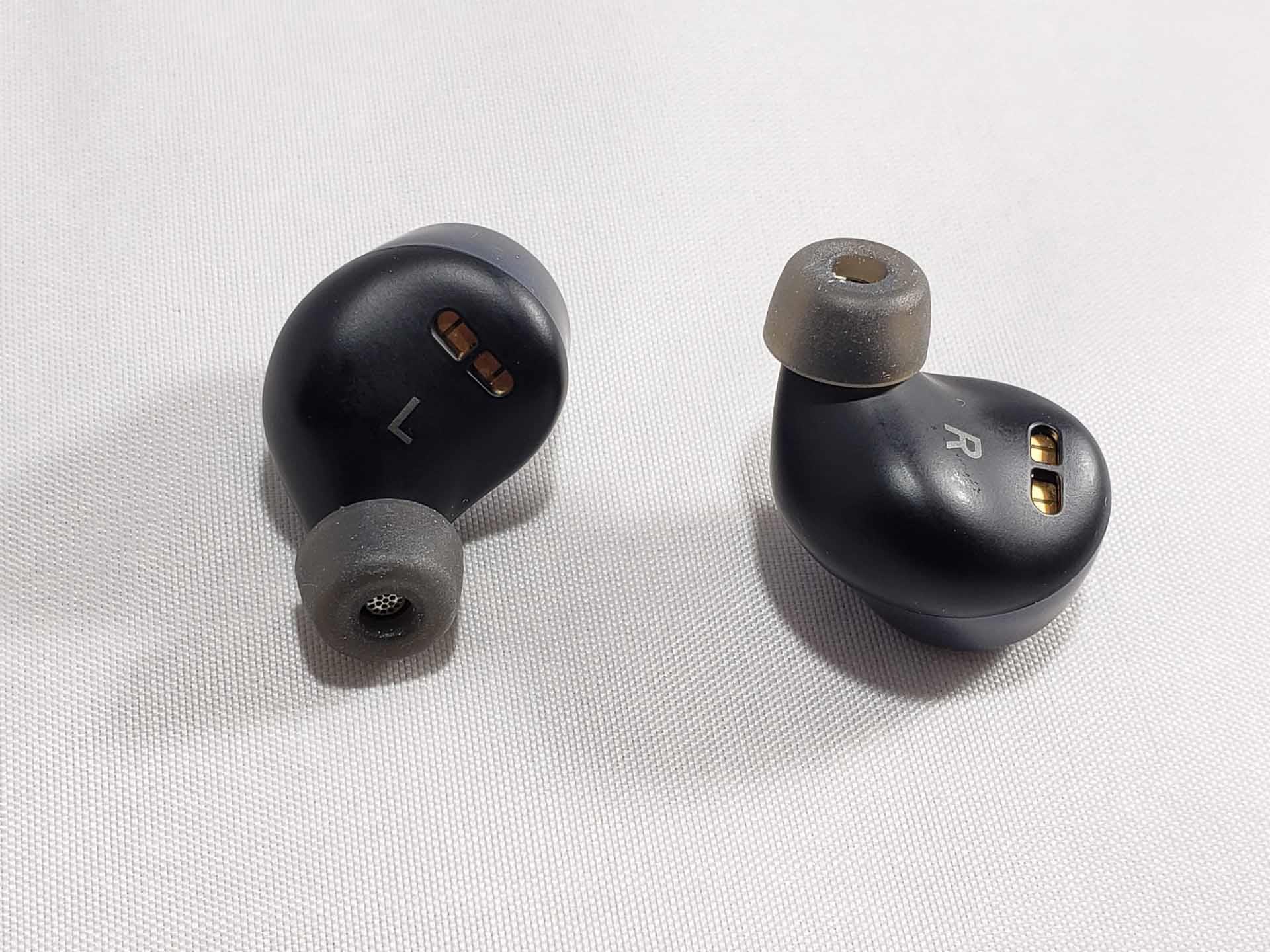 In order to minimize accidental tapping for times like when you need to adjust the ear buds, Creative made a wise decision to not respond to single taps. Doing accidental commands is just as, if not more, annoying than when commands don’t respond, so making commands initiate with more than one tap is a solid choice.

For some reason, I did have an easier time doing commands with my left ear bud than my right. It’s more so that I was probably missing the area to tap than anything and there is a good surface amount for taps to be detected. I found it much more reliable for me to use multiple fingers or even the palm of my hand to do the tapping. Also, sometimes it wouldn’t detect my third tap which I attribute for me either being too slow or me missing the capacitive area again. Either way, it took me a little bit to be more consistent in making sure I was able to touch the surface, but I think the shape and how it sticks out just a little bit more also contributed to me hitting the back rather than the side where there’s no capacitive sensor. 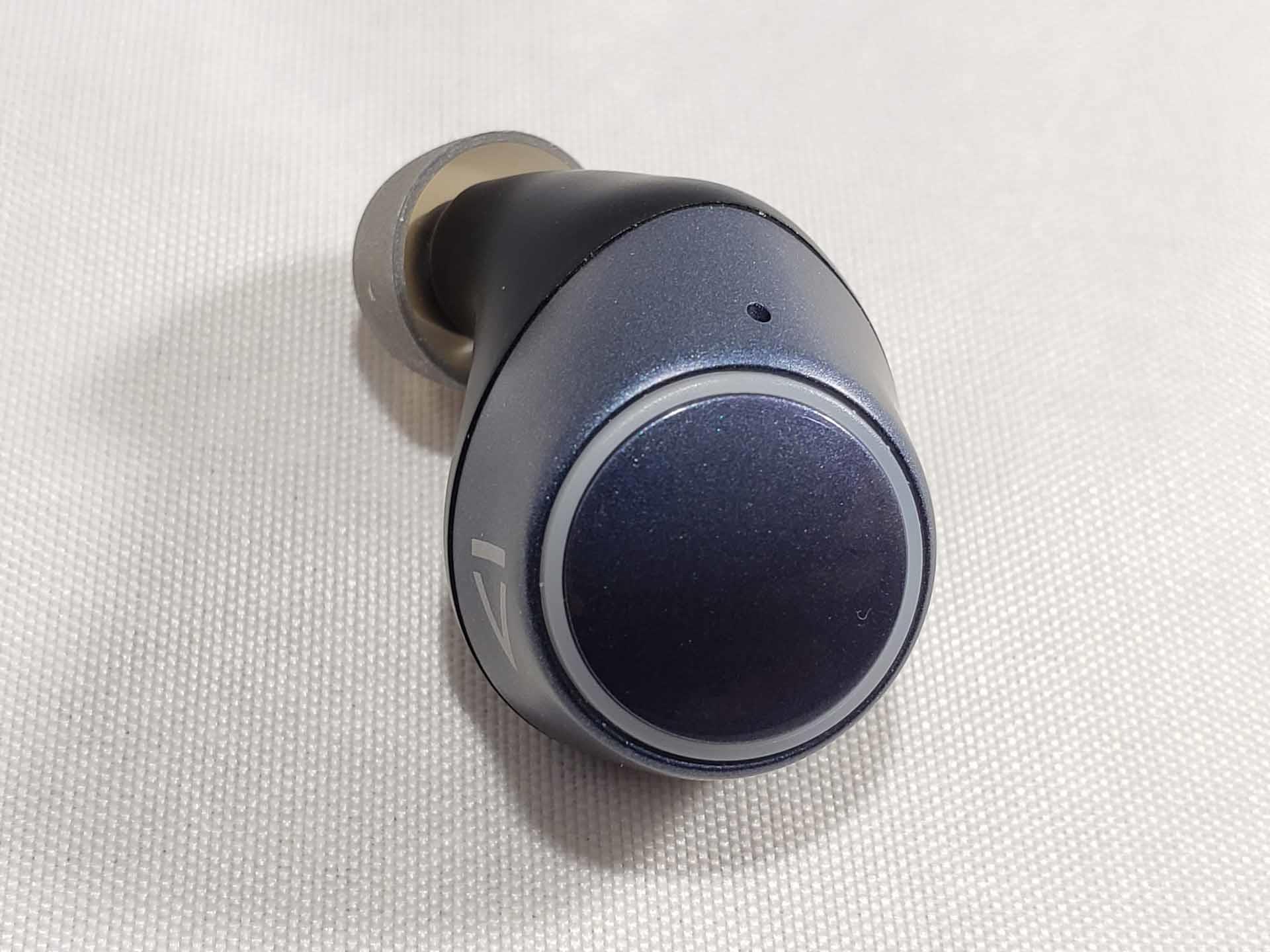 When tapping for commands, you’ll get a verification tone when the ear buds detects a command. One minor problem is you don’t know if the verification tone is for a double tap or a triple tap. There were many times where I wanted to skip ahead a track, which is three taps, and I get a tone only to have my music stop. I wondered did it really stop or is the next track just silent at the beginning. What I would’ve liked is a different tone play for a double or triple tap. Then, you’d be sure to know what commands the ear buds were doing.

And at this price, I didn’t expect an app to let you control any of the settings for the Outlier Air V2. An app to adjust what the touch commands do would really have made the Outlier Air V2 versatile in letting you customize what the taps do if you weren’t happy with how it’s setup. 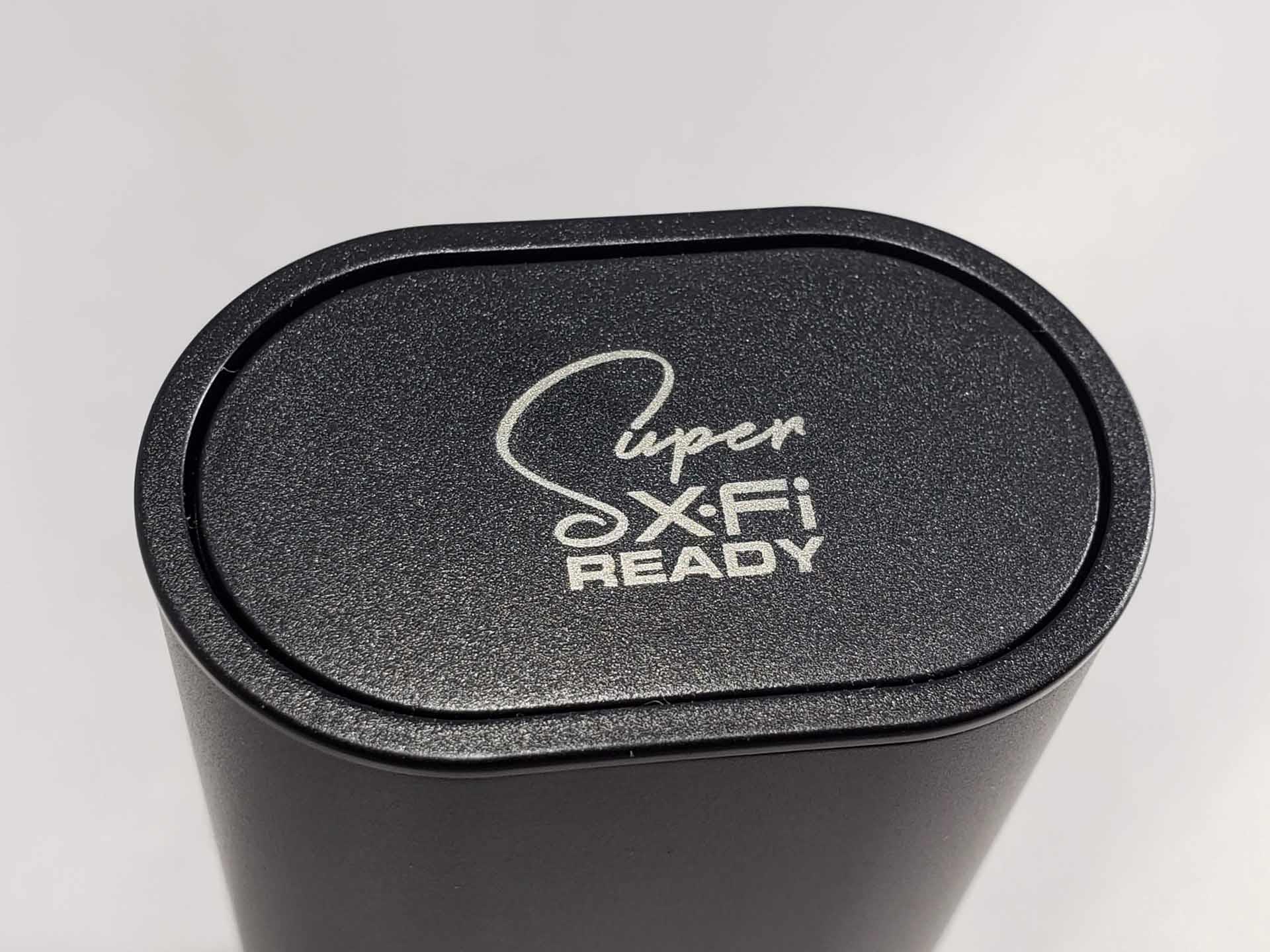 Those that exercise will be happy to know the Outlier Air V2’s rated at IP5X water resistance and will stand up to a good amount of sweating. Dust might get through, but not enough to damage the product.

In order to get a better fit, Creative this time has included multiple sets of tips which is much needed. Everyone’s ears are different and to be able to put on the right tips to ensure not only comfort but stability makes all the difference in using earbuds. So, good job this time with Creative on including some other tips to try out. I was able to find some tips that allowed me to do some running without them popping out of my ears.

As with the previous sets, you just take them out and pair the left one to your phone and the right one will automatically pair with the left. Once that’s done, it was pretty reliable in reconnecting to my phone when I take them out of the charging case. 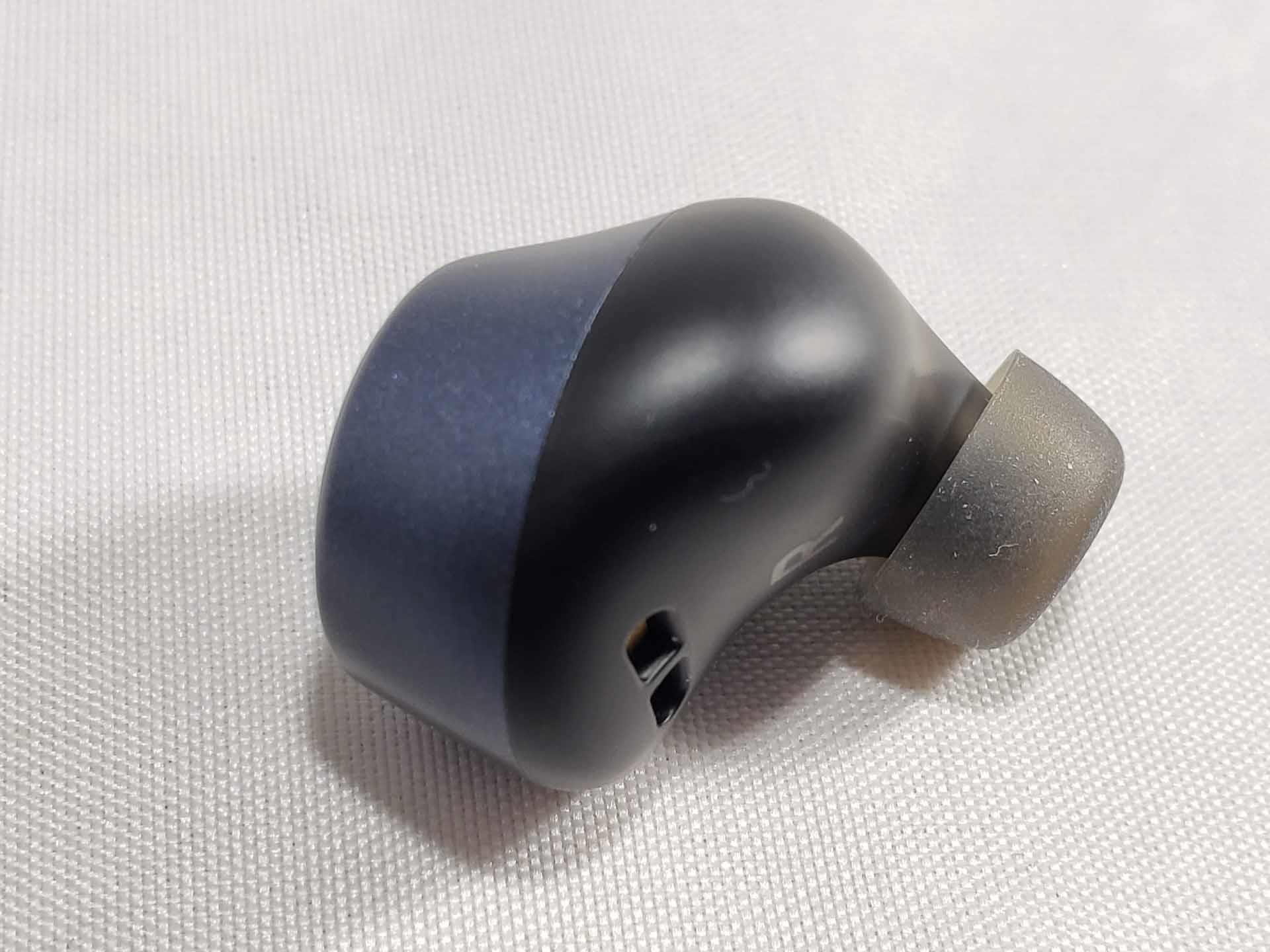 The one thing I wished it did was pause the music when I removed the Outlier Air V2 from my ear. I have a few sets that would automatically pause and play the music based on if they were in the ears or not, but the V2 doesn’t have this feature, which is slightly disappointing.

The distance by which the Outlier Air V2 stayed connected to my phone seemed similar to the first ones and that’s around 30 feet with line of sight. As always, your mileage will vary depending on the environment, but I didn’t experience any dropouts or disconnects when the phone was in my pocket.

Creative has included Qualcomm’s cVc 8.0 tech for improved call quality and I think it actually does improve my voice over the previous Outlier Air. I did a recording with it in some quiet and noisier environments and found it did an OK job in isolating my voice while making it sound clearer when talking. I did have to speak louder when more sounds were around me, but I think that’s par for the course for ear buds. I usually never had much luck with the people on the other end hearing me when talking with ear buds on, but the Outlier Air V2 did a good job at letting me talk on the phone without having to use my handset. 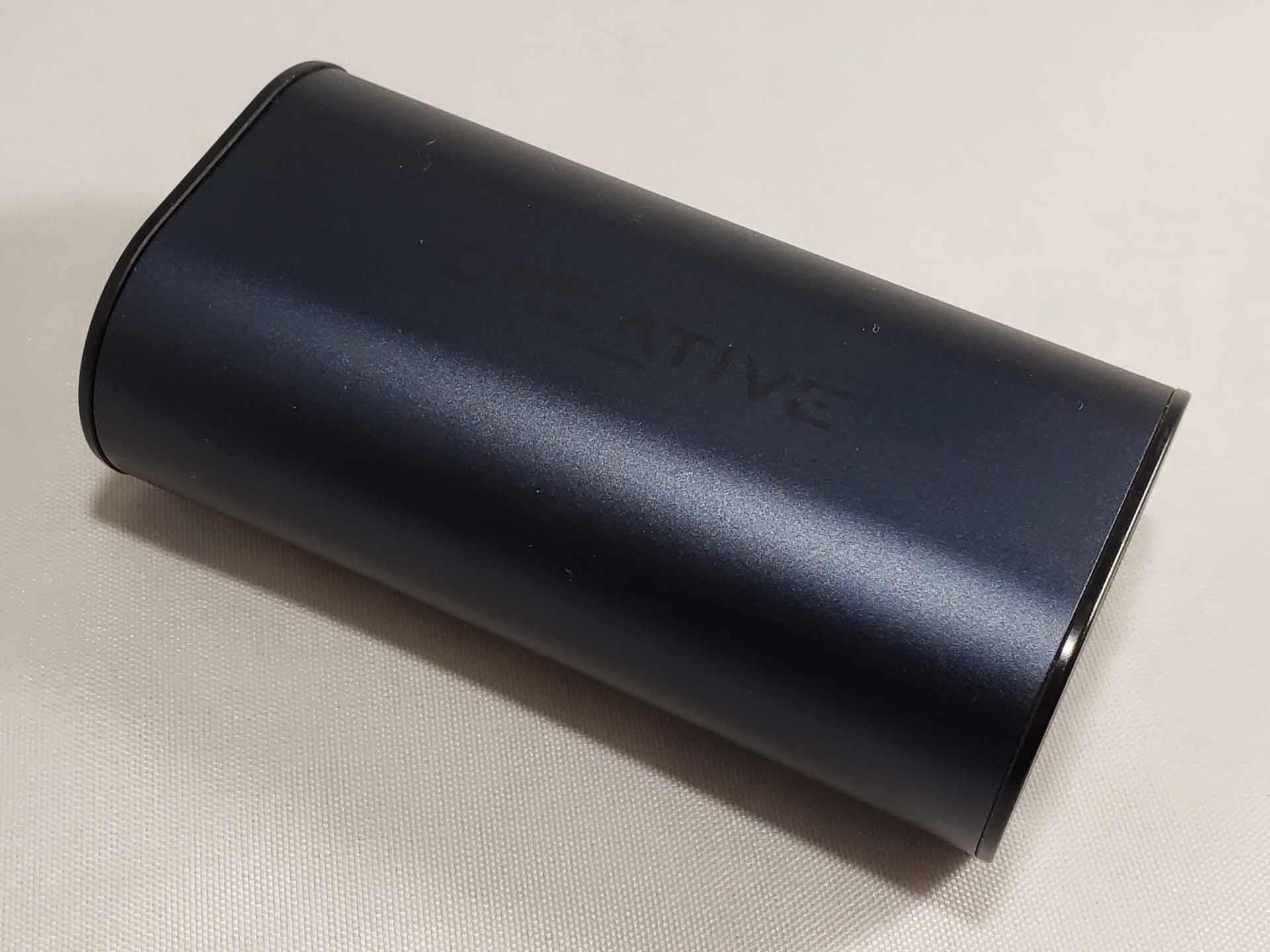 aptX, SBC, and AAC codecs are again supported giving you some good quality wireless sound. I do wish there was support for aptX low latency so I could use it in other situations such as gaming, but for music and movies, those two should do.

Sound-wise, the Outlier Air V2 has great highs and mids with good bass. Even on louder volume settings, they held their clarity up well. Voices and instruments came in clear on all sorts of music genres and the sound isolating nature of the tips makes it so you can pretty much drown out the noise from your environment. Whether it is music or movies, I really liked how the Outlier Air V2 sounded. Especially at its price point, they sound much better than the few I’ve experienced at or near the price. Do they sound better than the first generation Outlier Air? I think they do a tad bit. Not much, but when flipping back and forth between the two, I found the V2 to sound a little better. 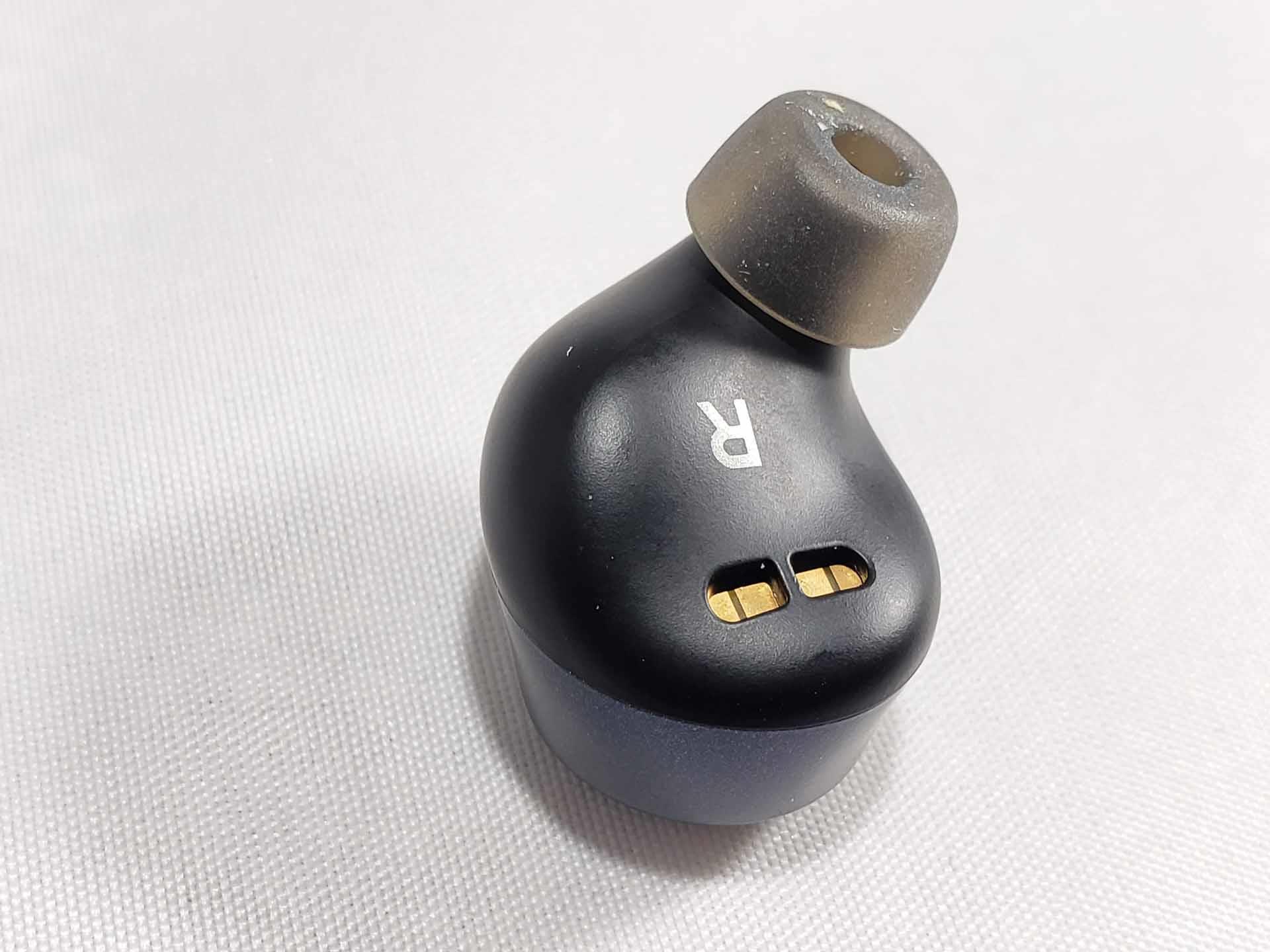 One of the best techs I’ve experienced at CES is Creative’s Super X-Fi and the Outlier Air V2 has software support to allow you to use it. Unfortunately, you can only utilize this feature with the app on locally stored music. That means no streaming service will work, unlike the Super X-Fi dongle that they sell which lets you use it with anything. When in use, the result can range from OK to really, really awesome in producing full, rich sound that makes it feel like you’re sitting in a middle of a large speaker setup. But since it’s dependent on local music files, I didn’t use the feature at all. From what I’ve read, this was the same thing with the Outlier Air Gold. but I’m hopeful Creative can find a way to expand the Super X-Fi feature to streaming media sometime in the future.

You’ll be hard pressed to find earbuds that match the battery life provided by the Outlier Air V2, which exceeds the 10-hour running time of the Outlier Air at 12 hours. In testing, I’ve come to around 11 hours or so making it easy to use for an entire work day. Once drained, you can get another 22 hours of charge for a total of 34 hours. To say the Outlier Air V2 lasts a long time is an understatement.

For a very reasonable price of $69.99 (normally $79.99) at the current time of this article, the Creative Outlier Air offers up quality sound, voice and touch controls in an ear bud package that will last you a very long time on a single charge. Creative improved upon an already solid ear bud offering with a much needed improvement in touch controls, all while keeping the price at a very attractive level. Those looking for a good quality set of ear buds that you can workout in should really consider the Outlier Air V2.